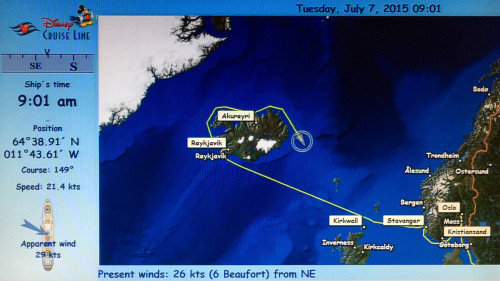 Our second sea day of this cruise was very… how do I say it? RELAXING. The day started out on a lazy foot with room service breakfast, something we’ve never had before. On previous sailings, we’ve gone up to the buffet and brought food back to our room, but after over a week of Cabanas breakfast we wanted to change it up and getting up and going down to Lumiere’s was not happening. This was truly a departure from our normal cruising habit of getting up an going early in the morning. Em did go to the gym, but she didn’t go until after 8am, which I don’t think has ever happened before. She was excited to note that it was not busy and she was still able to get a machine without waiting,

After breakfast, we hung around the room watching a Disney movie on TV and I continued my quest to upload photos from the previous day. After a bit, I decided to try a public area for better service. This did work once for me on the Fantasy when our stateroom did not have a good WiFi connect, but a change of venue on the Magic did not help my situation. Our first planned activity of the day was trivia in the Promenade Lounge, so I set up shop at lone computer desk facing the portholes in the Internet Cafe. I finally managed to upload all my photos for Akureyri and then noticed a Connect@Sea sign mentioning Possible service interruptions due to area configuration. 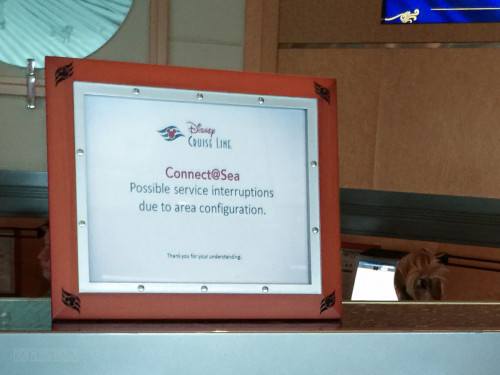 If this were my first time using the Internet on the Magic, I’d be hard pressed to to purchase a 1GB data package in the future. However, on our Southern Caribbean cruise last October, the service was excellent. Additionally, service was fine on the Fantasy. So, I will just go with the satellite coverage issue in this area and be thankful that I am no longer paying by the minute.

Emily and Isabelle eventually met up with me in the lounge to play Cruising for Trivia and probably the most logical game to play on a cruise ship… Battleship. Every day Guest Services had a stack of USA Times newspapers which was a nice touch to keep abreast of current events on this longer voyage. 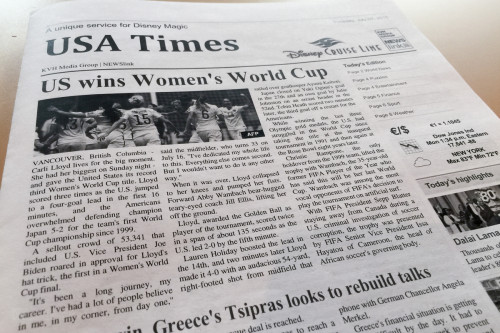 Em ordered the drink of the day, the High Tide, during the Battleship battle. After the girls finished their game, we ordered the All Hands on Deck cheese platter from room service for lunch, acquired an order of mozzarella sticks from Lumiere’s, and pulled it all toghether with the sparking wine we selected as a Platinum Castaway Club gift. 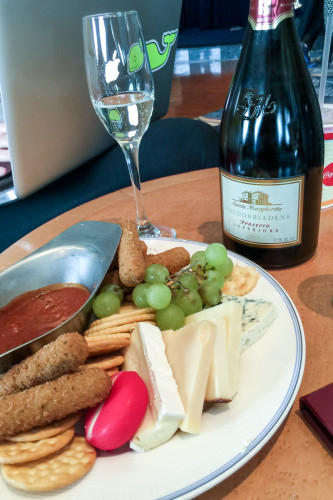 The remainder of the afternoon was primarily watching movies in the stateroom with intermittent napping. Remember when I said this was a relaxing day? I wasn’t kidding.

Just before we left for dinner, I checked the Magic’s current position on the stateroom tv. We were passing just south the Faroe Islands, which was originally a scheduled port of call on this itinerary before being changed to Kirkwall. 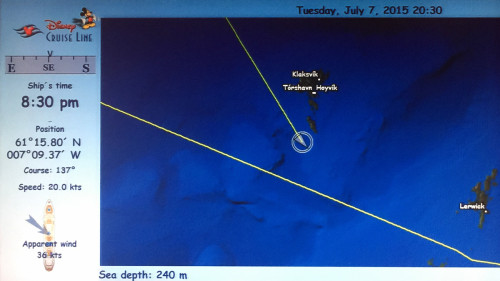 I braved the weather on deck 4 to snap a photo, but even after some heavy editing you cannot really make out the land on the horizon. I’m asking you to trust me on this; I am not just posting a terrible photo taken from deck 4. 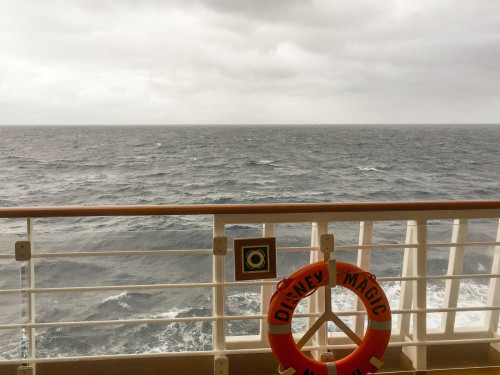 We headed down to Carioca’s for dinner to discover a new menu, the Land and Sea menu (I will eventually get this added to the menu page along with the other menus from this sailing). 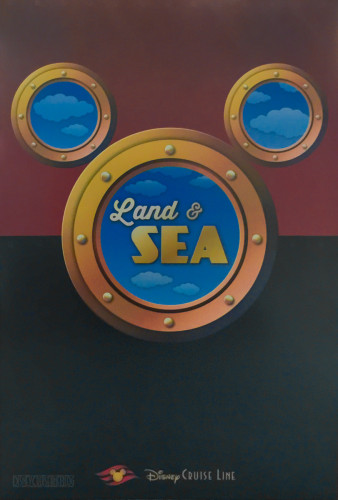 I started with and enjoyable Cauliflower Soup and the Emily really enjoyed the Roasted Carrot and Parsnip Salad. 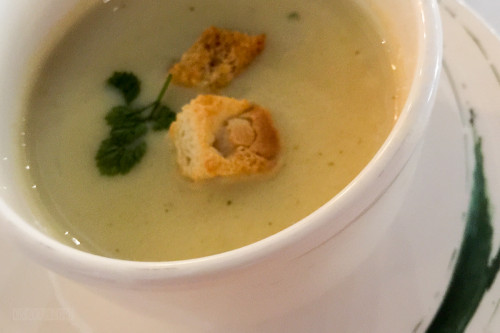 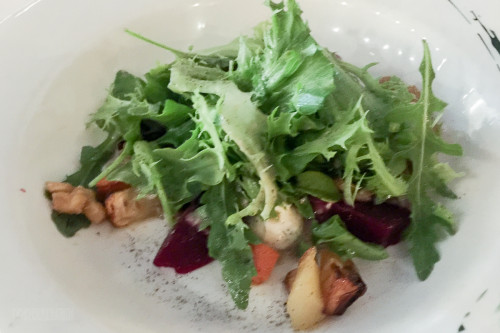 Both of the ladies ordered the Pan-seared Scallops and Asparagus Linguine & both of them enjoyed it very much. The pesto was delicious & the scallops were cooked perfectly. 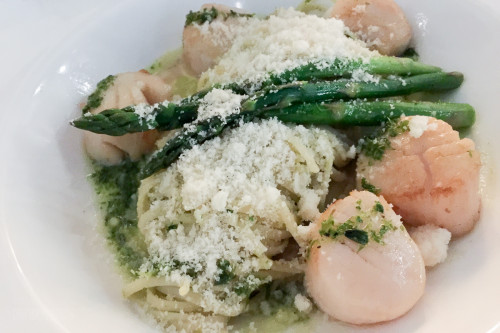 The Lemon and Lime Half Roasted Chicken was very flavorful. The sun-dried tomato risotto was prepared much better than the risotto I had the other day in Palo. 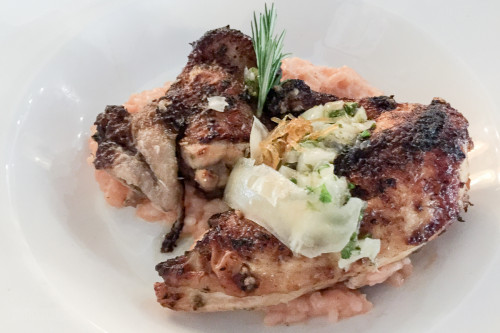 For dessert, I tried the Riskrem Pudding, but either it was too cold to taste or it just didn’t have much flavor. 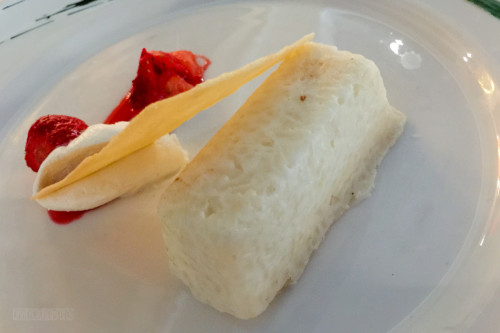 Emily decided to go with the Sweet Temptations sampler with triple chocolate terrine, caramelized apple cheesecake and a raspberry tartlet. 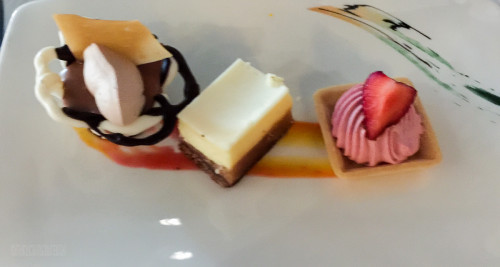 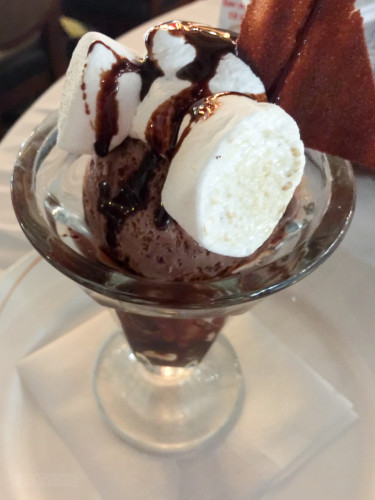 After dinner, we did not really have any solid plans. We walked around for a bit and saw that the Mickey 200 was about to begin in Fathoms. It’s been offered on several of our past cruises, but we’ve never watched or participated. 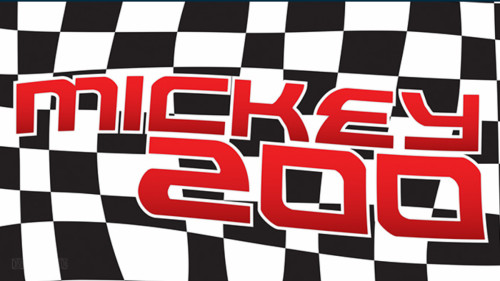 This was our first time participating in this event. The kids are the imagineers and the adults take direction from the kids to build the race car made of vegetables, tooth picks and pine wood derby wheels. 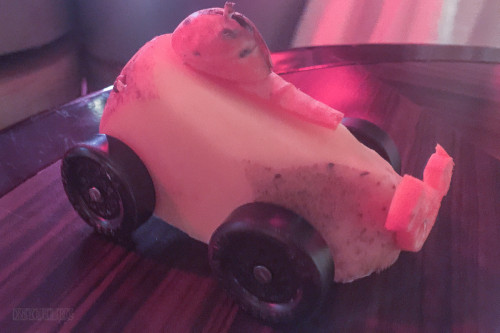 Isabelle provided the idea and gave me my orders for our spud racer. Once we had the basic car created, it was time to work on the details. Donald was the driver and just as our build time of 10 minutes expired, we added a Mickey hood ornament. 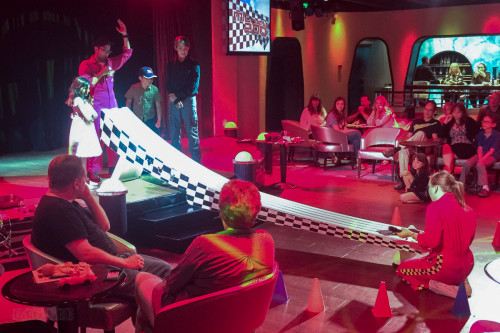 After a few rounds, Isabelle’s spud took home the Mickey 200 trophy. As a one time Cub Scout pine wood derby champion, I could not have been more proud. 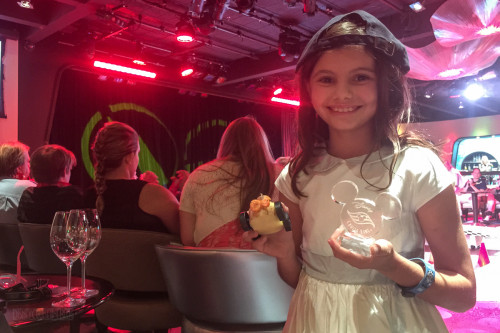 Going with today’s theme of relaxing, we headed back to  the room and went to bed rather than going to a post race party.