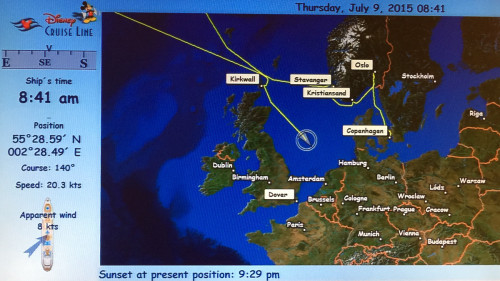 The final day of our 11-Night cruise began like most others with Emily going to the gym. Isabelle and I met up with her for breakfast in Cabanas. Throughout this cruise, I was happy to see some special items on the breakfast buffet rather than the same fare day after day. I may have mentioned this before, but the cinnamon rolls (sticky buns) were on par with those being served during Palo Brunch. It was also nice to see some breakfast sandwiches featured on a few different mornings. 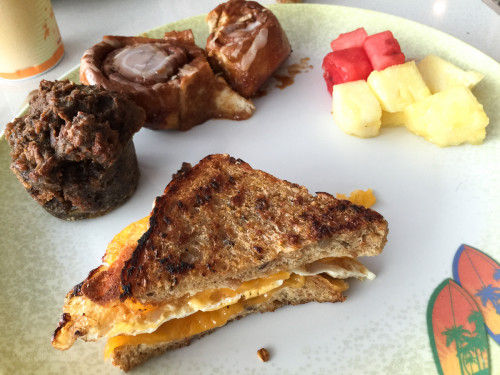 This longer sailing featured a character breakfast which required guest to get tickets, but Isabelle was not interested in doing this so we did not bother getting tickets when they were available. Below is the perfectly designed to fit the display menu from outside Animator’s Palate. 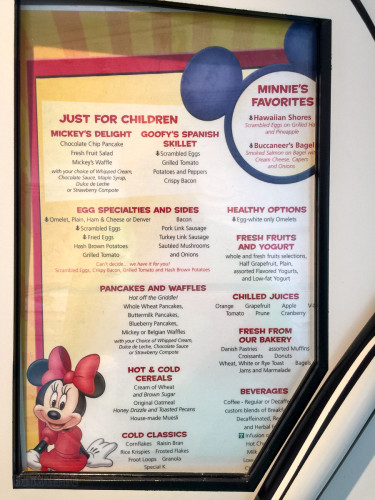 After breakfast, we headed back to the stateroom to start doing some laundry and begin packing. Needless to say, it was an exciting morning. Once we managed to finish the laundry and pack most of our stuff, we headed out to lunch. We grabbed a Bay Breeze (drink of the day) from the pool deck and headed into Cabanas. We ran into my cousin and his family and spent the lunch hanging out while our kids had a blast at the “kids table” next to us. 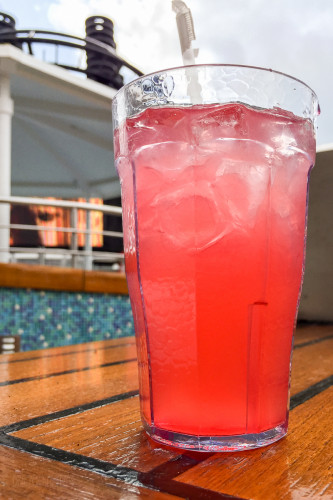 On the way back to the room, I stopped to check the soft serve flavors and the pineapple was back. I gave it a try and it is nothing close to a dole whip. It tasted like a pina colada (which would be a great with some rum). Too bad we already packed the travel bottles of rum. 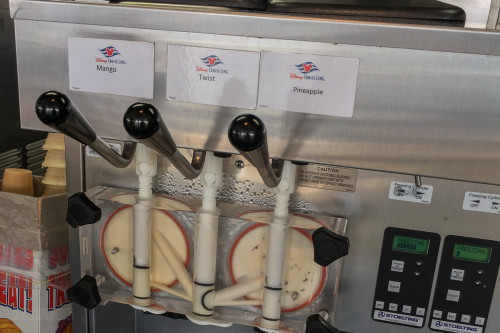 After lunch, we packed up the rest of our stuff (short of our evening attire) while Isabelle headed back to the Oceaneer Lab to prepare for the end of the cruise youth activities event in the Walt Disney Theatre, Friendship Rocks.

Each child that participates receives either a yellow or blue Friendship Rocks t-shirt and gets to go up on the Walt Disney Theatre stage for an end of cruise celebration with Mickey and Minnie dressed in Youth Activities outfits. During the show, photos and videos captured in the Lab and Club are shown on the screen in a scrapbook like montage. 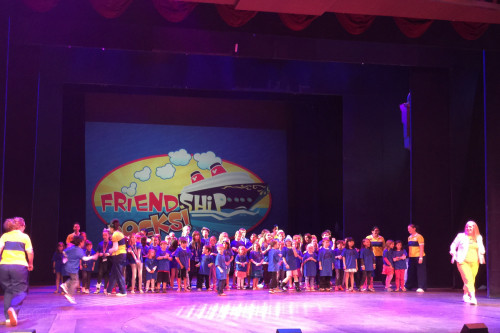 During our first dinner in Palo, we asked if there were any openings for the last night. Sure enough Felice, Palo’s manager, had some openings so we decided to forego the Til We Meet Again menu and dine in Palo to end the cruise. One little issue arose… our final night was also our night for the Animation Magic show in Animator’s Palate, one of Isabelle’s favorite events onboard. If you recall, earlier in the cruise we gave Isabelle check-in/out privileges at the Oceaneer Lab/Club, so after talking with our serving team the night before, Isabelle was going to go to Animator’s and eat by herself. I accompanied her to the restaurant so I could make sure she really wanted to do this and to deliver thank you cards to Juan, Erwin and Luis, our excellent serving team. After Isabelle finished her Animation Magic character, we parted ways and I joined Emily in Palo. Isabelle told us she was well taken care of during dinner and a boy from a nearby table invited her to eat with their family, but she declined. She enjoyed the shrimp pasta from the adult menu and a Mickey bar to close out the cruise. After she was finished, she went to the Lab until we were finished with dinner. 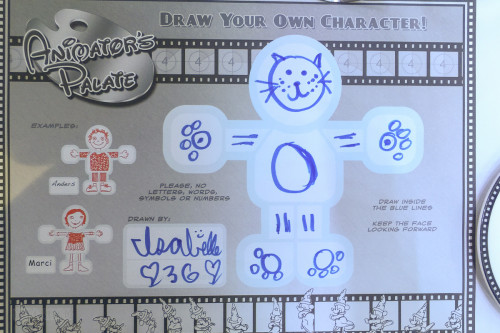 I was the last of the group to arrive at Palo. Everyone was already seated in the private room in the back corner. Earlier in the week when we discovered we had the same dinner reservations as my cousin and his wife and some other friends, Tracy from TravelOnADream.com arranged for all of us to join together as a big group in the private room. This was yet another all new experience for me during this cruise. While we have had dinner and brunch in Palo many times, this was the first time we have been able to dine in the private room. Thanks to Tracy, it was an enjoyable evening.

Since we were eating with a group, I cut back on the number of photos. Emily started with calamari, followed by a half portion of a lobster dish called the Pappardelle Con Argosta. 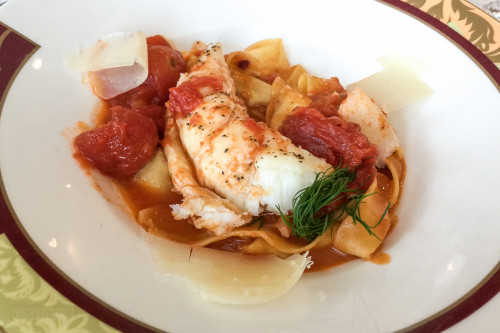 For her main entree, she ordered the Branzino in Cartoccio off of the wine tasting menu. The sea bass was delivered on a cart still in parchment and and plated table side. The sea bass was buttery and flakey & the vegetables were delicious. It was uninspired with regards to overall flavor though. 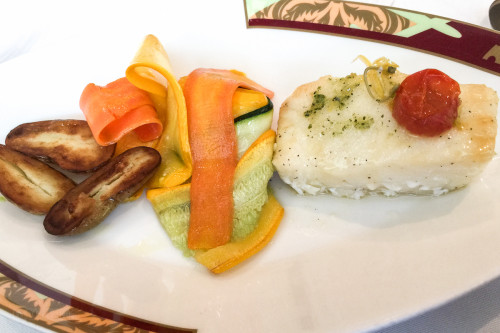 I decided to try Palo’s Beef Tenderloin again hoping it would be as good as I once remembered. I do not eat red meat all that often so when I do order it, I am expecting something special. I was fine, but nothing spectacular. Honestly, I miss the days when it was prepared with a gorgonzola cream sauce rather than a little bit melted on top. I realize I am in the minority on this as few others at the table ordered the tenderloin and seemed to enjoy it. Like the Quattro Formaggi, I was hoping for something great I remember from years before. 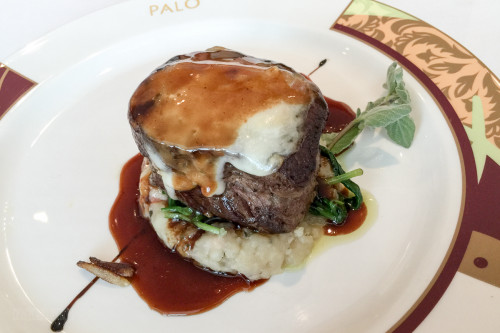 For dessert, I ordered something interesting, the no sugar added Lemon Cheese Ravioli. The raspberry consommé was excellent, but it overpowered the ravioli which just fell apart in the consommé. I understand the nature of the dish, but it was a huge disappointment given the flavor was so good. I would love to see this revised with a raspberry reduction drizzled over the lemon cheese ravioli or at the very least served with 75% less consommé to allow the ravioli to be the focus. 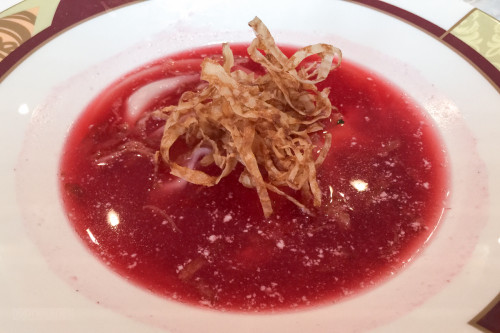 We were hoping to get out of Palo in time to see the new Disney Dreams: An Enchanted Classic which has been revised to include a Frozen segment with Anna, Elsa and Olaf. Dinner ran late, but Tracy, Bill & I still wanted to see what we could of the show. We arrived during the Cinderella segment missing the beginning and the Aladdin segments. Unless I missed it, the coolest addition to the show were projections just like on Cinderella Castle on the walls of the Walt Disney Theatre. We were told it looked even better further back from the stage, but since we arrived late we ended up on the side down front. I was a bit skeptical of the Frozen addition, but I am happy (well depending on your Frozen stance) to say it did not feel shoe horned into the show. The Frozen sequence features Anna joining Peter Pan and Anne Marie on stage as she sings For the First Time in Forever. The show transitions to In Summer with an animatronic Olaf before ending with Elsa’s power ballad Let it Go. This, however, is where something annoying happened. There are now snow machines installed in the theatre, but the sound they make takes away from the live performance of Let it Go. I’m sure some Disney show runner will tell us it is the sound of a blizzard, but frankly to me, it was annoying. The theatre did look awesome during Let it Go as the projections turned the theatre into Elsa’s ice palace.

Disney Dreams remains mostly unchanged in that all the previous segments are still there with Frozen being added near the end leading up to the powerful Lion King segment. For those interested, here is the basic breakdown of the revised Disney Dreams: Intro – Aladdin – Cinderella – Little Mermaid – Beauty and the Beast – Frozen – The Lion King – Closing. It will take multiple viewings or someone with knowledge to say what was shortened, dropped or whatever was changed to add Frozen. Arriving late, it was hard for me to tell if the show length was extended or if portions of the some were modified to make room for the about 9 minutes of Frozen.

After the show, it was time to rush back to the room to get our suitcases set outside our stateroom. Emily and Isabelle were already ready for bed when I returned. I scrambled to pack my evening attire before the cut off time for the luggage. I ran down to guest services to put some cash on our account and headed back to the room to work on the a trip log entry only to discover my data package was used up. Oh well, I needed to get to bed to prepare for our full day of flights back to Orlando. 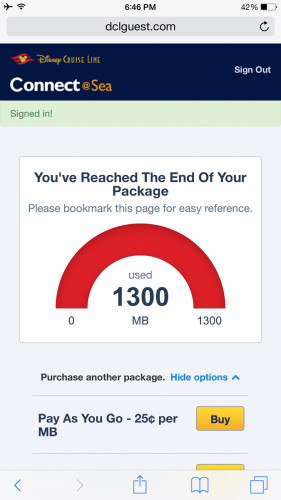 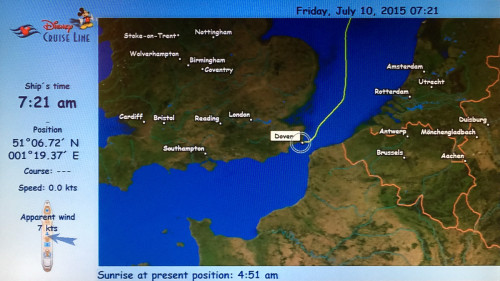 Today is the day we will spend all day traveling home to Orlando.  We went up to Cabanas for our final breakfast at 8am rather than eating in the dining room with our servers at the crack of dawn before heading off the ship.

The Dover cruise terminal made for a quick exit and we had an easy time finding our luggage; easier in fact than at Port Canaveral if you can believe that. Inside the terminal, there is free wifi, and again unlike Port Canaveral’s luggage area, you are permitted to use your phones. 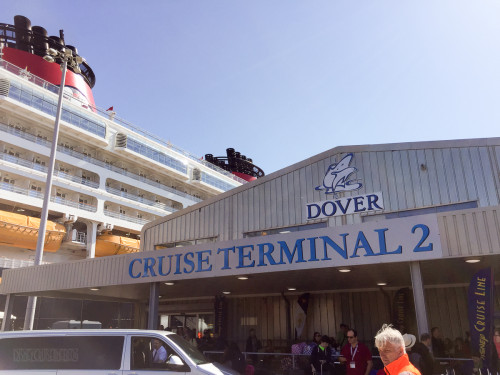 We arranged transportation from the Port to Gatwick airport with Paul from Kent Prestige Taxis based on the recommendation from our friend Craig Duncan. Paul’s father met us outside the terminal by where the busses were picking up passengers with his van and we quickly loaded up and headed toward the airport. 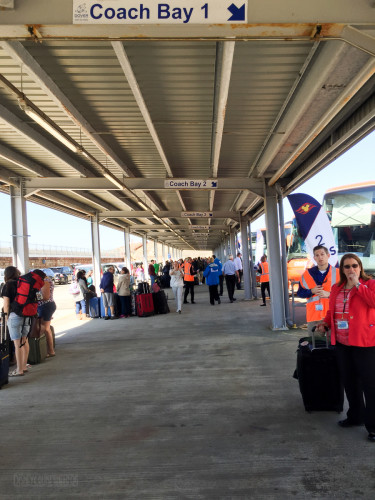 As we left Dover, we caught the last look at the Magic and briefly saw amazing cliffs. 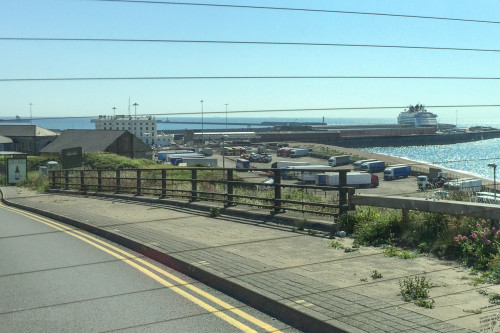 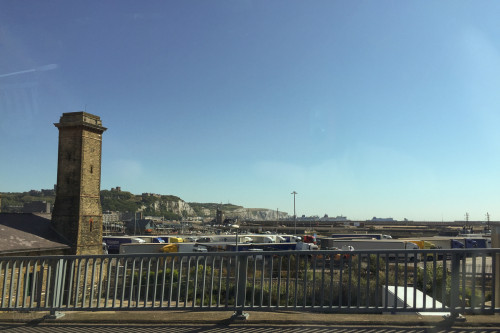 We did not encounter any traffic, but DCL suggests to allow 2.5 hrs for the drive to the port to the airport. We arrived at the Gatwick Airport in about 80-minutes matching up the google maps estimate. 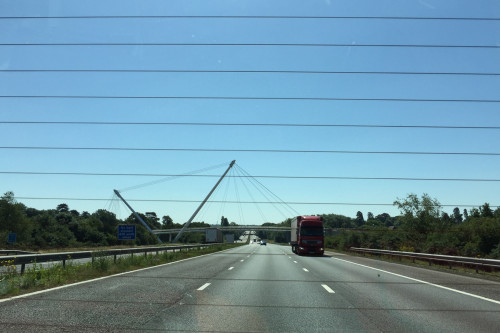 We didn’t shop around as we trusted Craig’s recommendation and we are happy with the results of our private transportation rather than a bus. I can tell you it was a lot cheaper than the transfers offered by DCL and we had a van to ourselves. 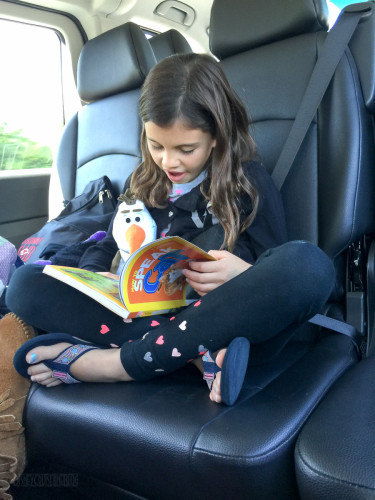 Our first flight of the day took us back to Reykjavik, Iceland for a short layover. Turns out the gift shop in the airport had much better prices than all of the shops we visited during our 3 days in Iceland during the cruise. 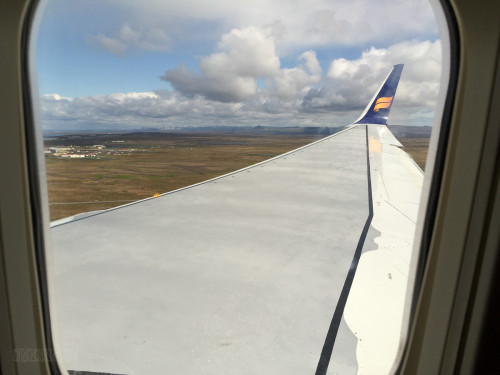 Our next stop was Toronto, where I believe we walked from end to end of the airport clearing Canadian customs then going through US Customs where I learned the agent doesn’t really mean what he said when he asked where I came from… Apparently, Reykjavik was incorrect. I thought it was a straight forward question, but thankfully, Emily jumped in before I said something I’d regret. Seriously though, how hard is it to ask me where we have been traveling since we last left the United States? That I could have answered to his satisfaction.

Our last flight home was about 90+% of full of families headed to Walt Disney World and I cannot make this up; we were flying in the WestJet Magic plane featuring Sorcerer Mickey on the tail. 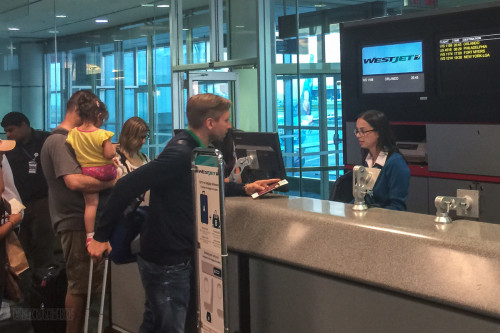 Upon arrival to MCO, our amazing friend Rose (who also was our house/petsitter) was there to pick us up just after midnight. We made it home to close out this pretty awesome adventure.

After all the luggage transfers, we were trilled to see the DCL wine glasses made it home unscathed! 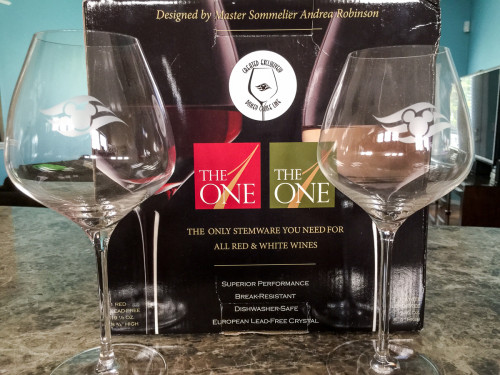 I will try to collect my thoughts and do an overview of the itinerary and the cruise. Let me know if you have any questions about our trip or the itinerary in the comments below and I will address those in the follow up post.