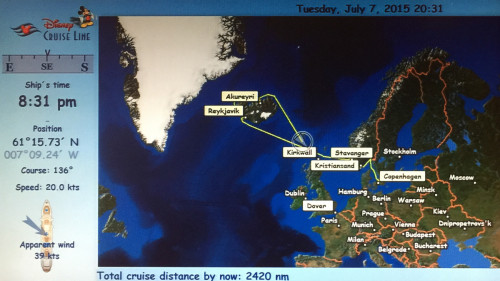 Not really the correct map, but I cannot find the photo I took on the morning of July 8th, so I am using one from the evening before showing us headed to Kirkwall.

Isabelle and I woke up to discover Emily was already at the gym. We met up with her in Cabanas for breakfast before going back to the room to get ready for our day ashore in Kirkwall. We did not have any excursions planned today. The only plan was to meet up with Tracy and Bill from TravelOnADream.com and walk around Kirkwall.

The cruise pier is about a 5 minute drive to town and there were free shuttle busses running all day for our convenience. For anyone that wanted to walk, we were told it was a 30 minute walk. 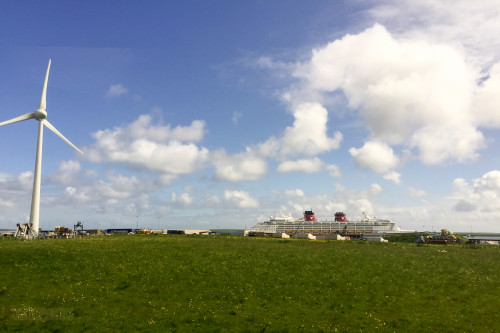 Our first stop was the St. Magnus Cathedral which was founded in 1137 by the Viking, Earl Rognvald. When we arrived, there was a tour group heading inside so we opted to take a walk around the grounds to see the cemetery. 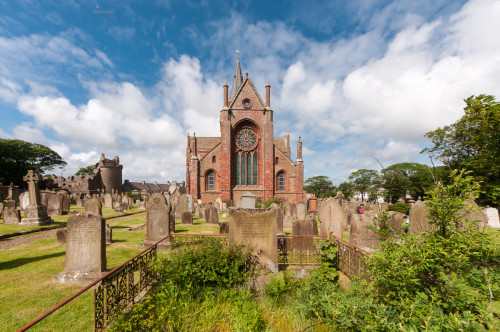 We ran into a very friendly and well fed cat in the cemetery. She had a thick coat to protect her from the outside elements. It was a cold, blustery day. 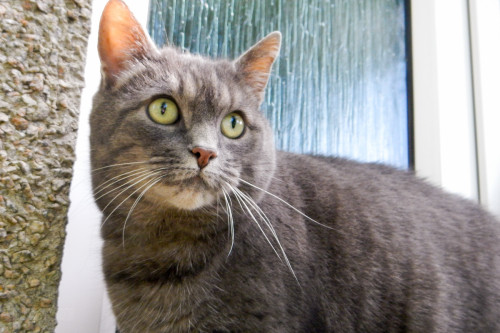 As we made our way around the back of the cemetery to the front, the tour group had dispersed so we felt it was a good time to go inside. 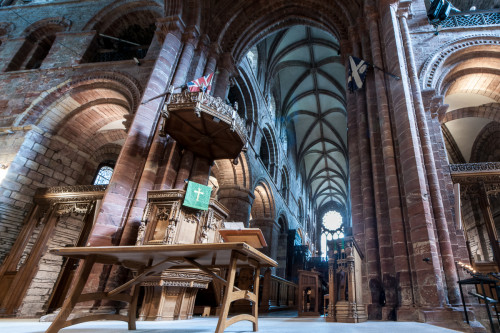 The interior of the cathedral was full of detail and memorials to explorers such as John Rae, an Arctic Explorer. 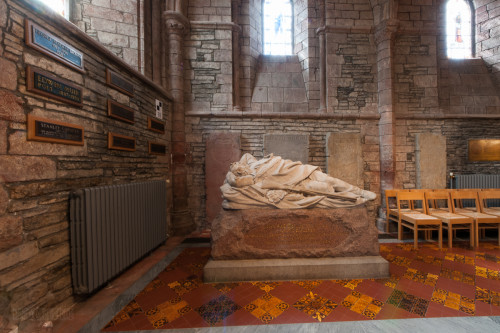 As you’d expect, all the windows in the cathedral were beautiful works of stained glass art. 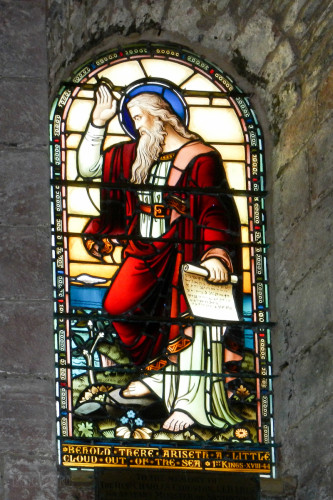 After exploring the cathedral, we walked towards the Kirkwall Bishop’s Palace and site of The Earl’s Palace. 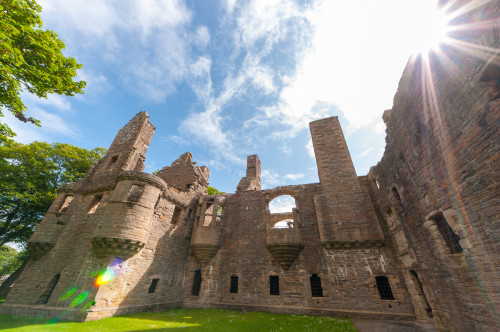 A sign on the wall mentioned we were potentially standing on the spot where a brewhouse once stood. However, there was no sign of beer to be found. 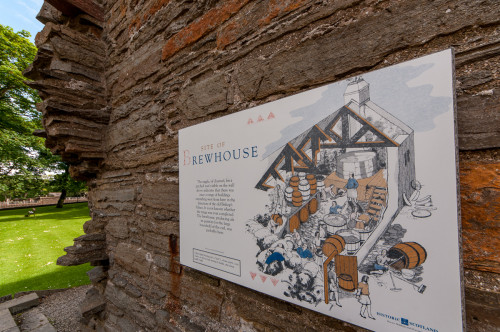 Our next stop was the Orkney Museum (free admission) which had bunch of little rooms with various artifacts from the area. The upper floor had an exhibit, Orcadians in the Trenches: The Land War, giving visitors a look into the lives of those serving during World War I. 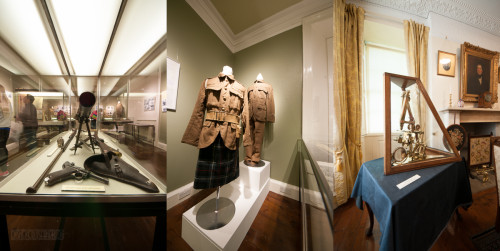 One particular interesting item was Eric Linklater’s (a well-known Orkney writer) helmet with an entry and exit hole caused by German machine gun bullet. The placard indicated he was shot in the head, but was doing fine; well enough in fact to write a letter to his mother telling her of the event. 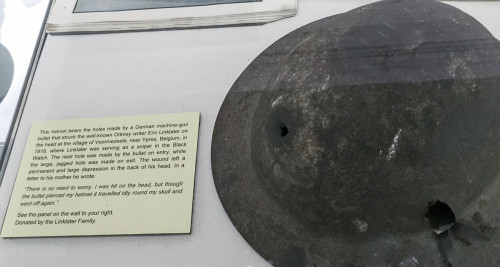 Our walking tour of Kirkwall did not provide us an opportunity to see the Standing Stones, but we did get to see this model in the museum. I guess this sort of counts. Probably not, but I took the picture so I’m going with it does count. 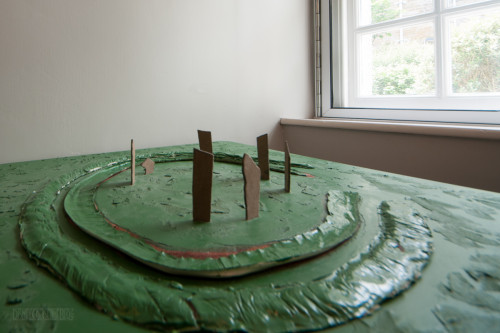 We asked a local for the best place to get some fish and chips and a beer. We arrived at the location only to discover it was for guests 18 and older. This became a trend in Scotland. All the bars we found were 18+ which meant we needed to go to plan B. As luck would have it, The Harbour Fry was right next store to the location we were referred to earlier. It also happened to be the same restaurant advertised in the onboard shopping guide for Kirkwall, which could be the reason we saw so many crew members walking through the door. According to Tracy, Bill & Isabelle, the fish was good. The only issue with this restaurant was it was cash only. Luckily, Tracy and Bill stopped at an ATM earlier in the day and had cash on hand. 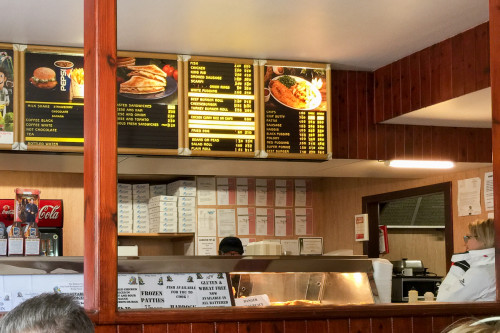 After lunch, we walked around to some of the shops in Kirkwall. Unlike some cruise ports of call, Kirkwall did not have your traditional tourist traps or Diamonds International locations. One shop, The Odin Stone, featured unique art and crafts from local artisans. During our visit, Jeanne Bouza Rose was creating a puffin using the Provincetown Print method. Jeanne was really nice and asked Isabelle to help her with the process essentially turning our walking tour into one of DCL’s family centric port adventures with a built-in youth activity. 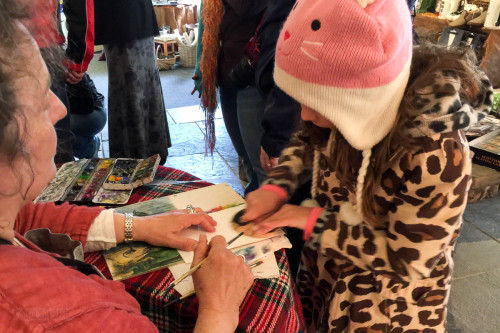 We stopped in another shop to pick up some other items to bring home as gifts, & then walked back to the bus stop to go back to the ship. One of the local information guides told us of a hotel that we could go to for drinks (& free wifi) with Isabelle, as it had a ‘family certificate,’ but this isn’t the same experience as a true pub, so we decided to just head back. When we returned to the pier, I stayed on the dock to take a few pictures. The wind was really picking up at this point, so I didn’t stay out much longer. 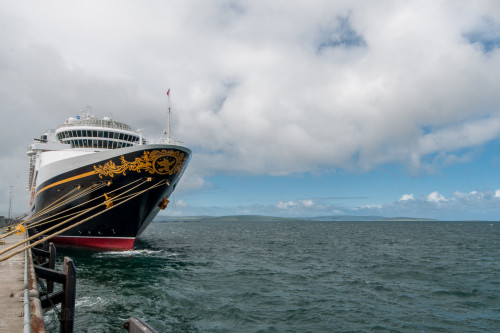 I dropped my camera bag off in the stateroom and met back up with the group in the Promenade lounge and ordered the drink of the day, the Beer Breezer. Wait – Emily didn’t order the drink of the day? What is in a beer breezer you ask? Well, the first ingredient was the turn off for Emily… COORS LIGHT. That is right – Coors Light was the first ingredient listed on the sign posted on the bar. Thankfully, it turned out it was used more as the finisher along the line of how they often use Sprite or club soda – more of a topper. The rest of the drink is a mix of Pomegranate, and St. Germain Elderflower. I cannot believe I am saying this, but I was pleasantly surprised by the drink as the Elderflower ended up being the dominant flavor. As one would expect, you (thankfully) couldn’t taste the Coors Light. 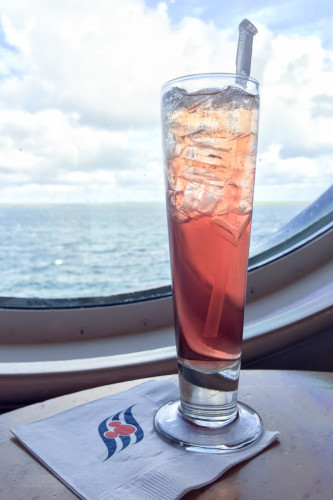 While we were hanging out, a member of the cruise staff team came over and asked Isabelle if she wanted to try the Iron Man Playmation glove. They had a few of the onboard for kids to demo the Playmation Marvel Avengers Starter Pack. She said it was fun to play with, but not something she’d put on her Christmas list. Later in the evening, we found the following handout in Mickey’s Mainsail with a DCL tracking link to pre-order from the Disney Store.

We were all craving a snack, so Isabelle and I ran up to the pool deck and grabbed a few slices of pizza from Pinnochio’s and a platter of fries and chicken fingers from Pete’s for the group to share during TV tunes trivia in O’Gills. Isabelle had some pizza then bounced to the Oceaneer Lab before dinner. Thanks to our years of watching TV, Tracy, Bill, Emily and I all took home new DCL water bottles after winning the trivia challenge.

As we were heading to dinner, they announced that we should head outside. We stopped out on deck 4 to listen to a nice sendoff from the Kirkwallians by the Kirkwall City Pipe Band. 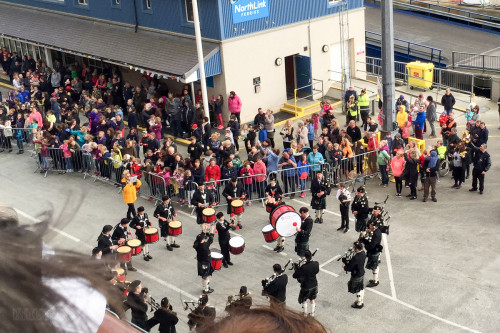 Tonight was semi-formal night and we were ‘clapped in’ to the dining room by the servers. Tonight’s dinner was the Captain’s Gala menu in Lumiere’s. I ordered the Boston Bibb Lettuce from the regional inspirations portion of the menu. It was flavorful and I’d order it again, but for my taste it was prepared with a bit too much dressing and I wish it had a few more walnuts than the one pictured below. 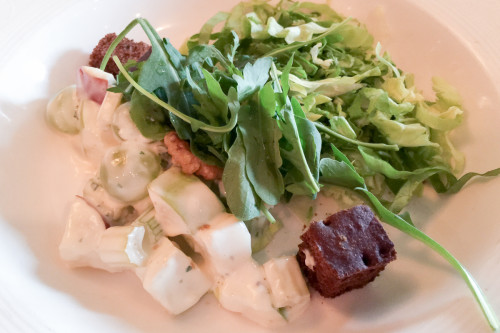 Considering this was a regional inspiration and were were in Europe versus the Northeast coast of the US, I am going to go out on a limb and assume these menus may very well be around next year when the Disney Magic makes her first call in Boston during the 2016 Eastbound Transatlantic.

Emily ordered the Beef Steak Tomato and Vidila Onion Salad. It was basic – nothing to write home about, but fine. 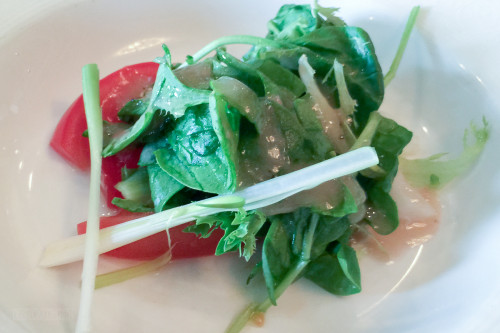 The highlight of the Captain’s Gala menu is the Oven Baked Lobster Tail. I hear it is killer (<– bad selfish allergy joke there). Both Emily and Isabelle have this as a standing order on Captain’s Gala night. It is pictured below in the shell, but this was just by luck as our asst server Erwin was quick to de-shell the lobster meat and pour some refined butter sauce. Emily said that these were true (large) lobster tails, not the small rock lobster tails served on the Caribbean cruises. They were flavorful & succulent. Also, the ladies mentioned that it was nice to have it paired with flavorful lemon smashed potatoes vs. the flavorless saffron rice it has been paired with in the past. 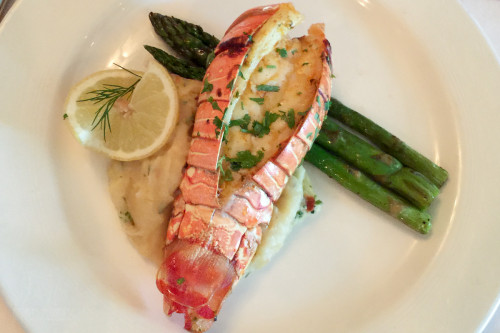 I’m sure if I wasn’t allergic, I’d also order the lobster, but since I am, my standing order is the Fettuccine with Parmesan Crusted Chicken. The chicken was great, but the fettuccine tasted like it was made 3 hours earlier. 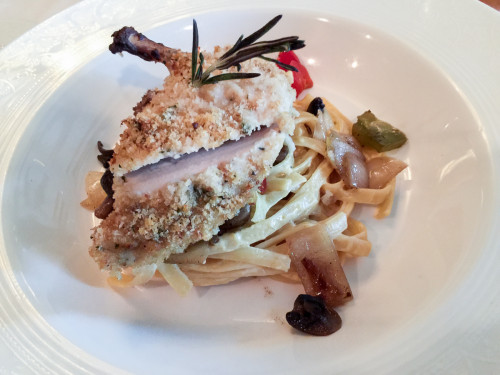 Isabelle ordered the warm chocolate lava cake without the vanilla ice cream on top from the adult dessert menu, and she cleaned that plate. She is a chocolate fanatic for sure. Emily ordered the Bananas Foster sundae, and said that it was delicious and was just the right portion. The bottom had rum-glazed caramel bananas, and there was a small scoop of vanilla ice cream drizzled with caramel and topped with whipped cream. A definite ‘would order again.’ 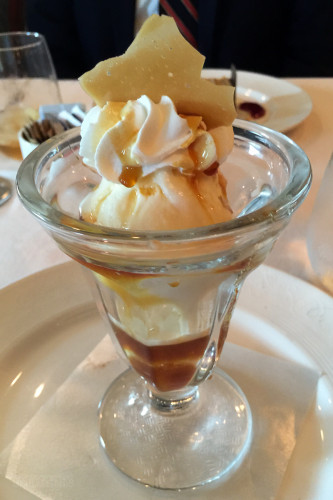 I ordered the Russian Honey cake, which was on the regional inspiration section of the menu. Our server, Juan, also recommended this dessert. I liked it, but it needed more berry sauce. 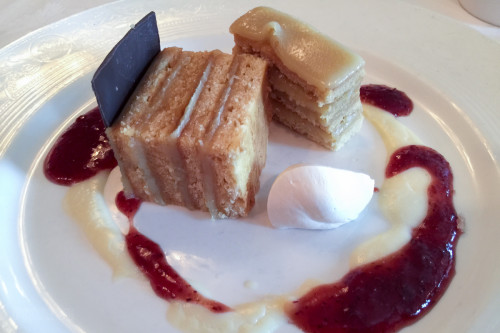 After dinner, we headed over to deck 4 forward, the Preludes area just last the shops, as Isabelle was interested in participating in Officer Pin Trading. She missed it the first time it was offered on the cruise since we were in Palo, so she was excited to be able to go tonight. Isabelle is very extroverted and likes to pin trade, but more often than not, she is interested in chatting with the officers. We were there for about 20 minutes and she made her rounds a few times, but only traded for about 2 pins. We said hello to Commodore Tom, but he was not wearing a pin trading lanyard.

After we were through, we headed back to the stateroom, and Monsters Inc. was ending on the Pixar movie TV channel. After showers, we were very excited to see that Monsters University was the next movie. This is a family favorite, so we settled in to wind down and enjoy the flick. Once the movie was done, it was lights out. Tomorrow brings the last sea day and the last day on the ship. Time to rest up before having to think about packing…….