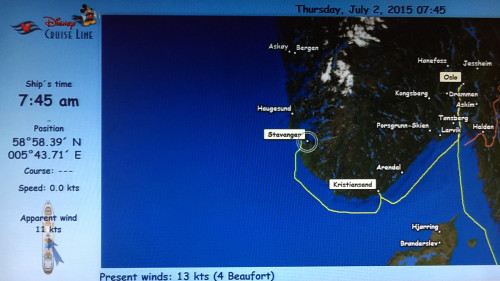 Three. If you are counting at home, that is 3 days in a row Emily has gotten up early and almost rope dropped the gym. That’s awesome; I give her credit for doing this everyday. During previous cruises, I would get up at crazy hours of the morning to take photographs around the ship, but sleep tends to win out and frankly, I was tired of my run-ins with ship security. Sorry about that little tangent…..let’s get back to talking about this cruise!

Today we were in Stavanger, the third and final Norwegian port of call during this itinerary and we only had about 5 hours ashore. All aboard time was 12:45 PM because we have a distance to travel to Iceland. All ashore time was about 7:30 AM and unfortunately, due to the Disney Cruise Navigator App technical glitch with the chat feature not delivering messages, we were unable to connect with the Jarretts to set a meeting point to explore Stavanger together and see the Swords in the Rock.

About 30 seconds after we walked off the ship, I pulled my camera out only to find out I left my memory card in my laptop case. After my 10-minute detour back to the stateroom, we resumed our day in Stavanger. 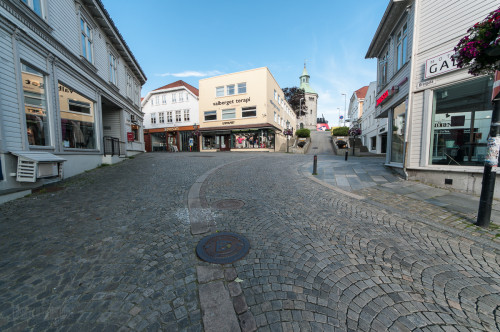 It took about 30 minutes for us to get our bearings and find the closest stop by the pier for city bus 29. Our research had determined we just needed to go to a specific bus stop, but there was some road work near the bus stop which resulted in bus 29 using a temporary spot down the street. Luckily, the bus was still on schedule for its 8:42AM pick up. We spotted the bus as it round the corner, but still didn’t know which of the various stops on the street it was going to use. Luckily, we were only about 100 feet from the temporary stop!

For two adults and one child, the fare was 80 NOK (about $10 USD) which also included the return trip as we traveled the same route within a defined period of time. It is important to keep your receipt as it is your valid ticket and has the time when it will expire. Even if you stay longer, at double the price it was still vastly cheaper than any of the DCL excursions to see the Swords in the Rock, plus, I was not rushed and was able to take photos at my leisure instead of being headed back onto a tour bus. This is a definite bonus to exploring ports on your own. 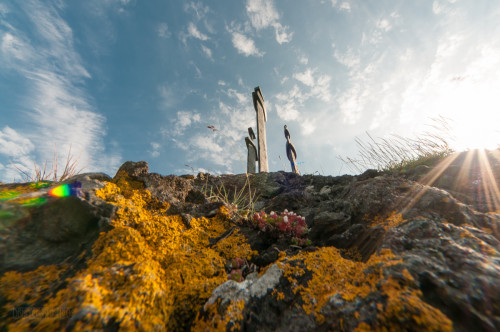 There were a couple of tour groups that arrived and left while we were at the Sword in the Rocks and I cringed a few times when some of the kids were attempting to climb down a fairly steep area with some sharp rocks rather than taking a much safer route.

We spent about 20-30 minutes before heading back to the bus stop to catch the 9:33 PM bus, which on this day was running a few minutes behind. We took the bus back to the area we originally picked it up and walked along the pond towards the church to take few more pictures. 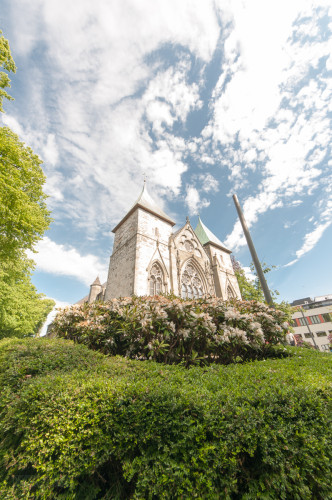 During our morning walk before catching the bus, we spotted a few stores in town we wanted to check out, but first it was time for some caffeine. 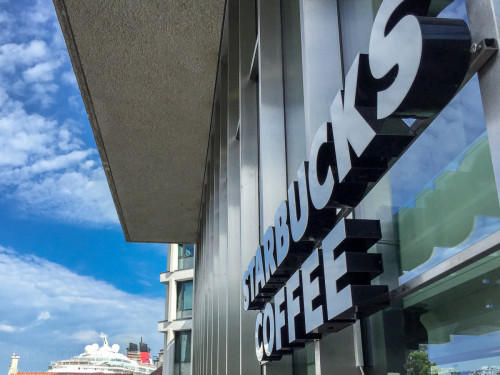 We stopped in Starbucks which was conveniently located to the ship and had good free WiFi. They are not able to accept payment via Starbuck’s smartphone app so we had to use some of the cash Emily converted at Guest Services the day before. Emily asked if we could use our Starbucks gold card via the iPhone app, and the Starbucks employee said that we could not. I did not ask about the physical gold card, though. 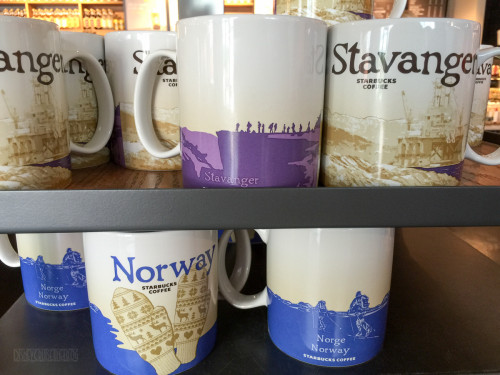 This Starbucks had a few unique Frappucchino flavors and two ‘You Are Here’ mugs. 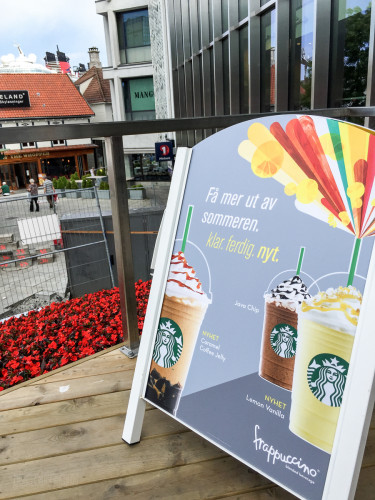 The last tidbit about the Stavanger Starbucks is that it has a restroom with a keypad. The code is written on the chalkboard just to the left of the bathroom door.

I have a love/hate relationship with port shopping. Ok, let me be completely honest, I HATE port shopping areas. The experience in Stavanger was much different. I did not feel I was in a typical cruise port like you see all over the Caribbean. There were definitely stores that catered to cruise passengers, but for the most part it was a nice place to walk around and check out some local shops. We stopped in the toy store which had some Frozen merchandise with the regional title, Frost. Additionally, it was neat to see a display of classic Disney story books in a language other than English. 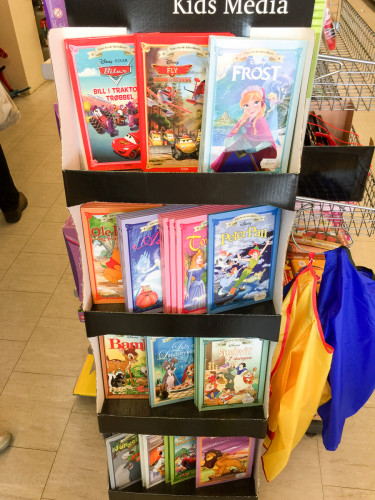 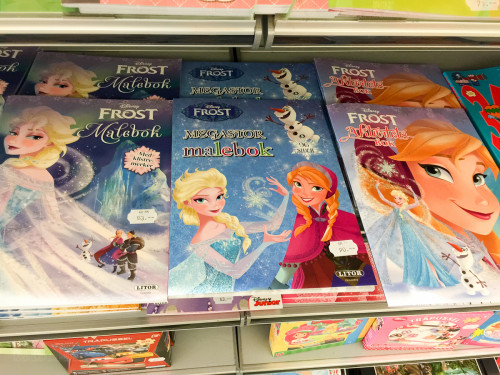 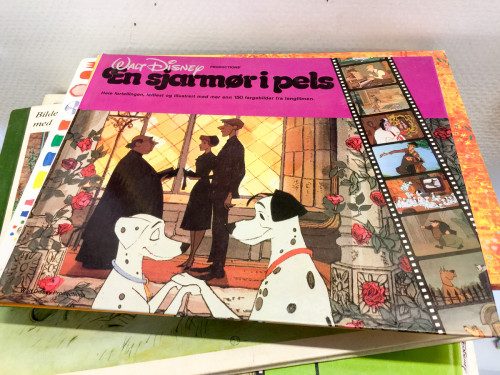 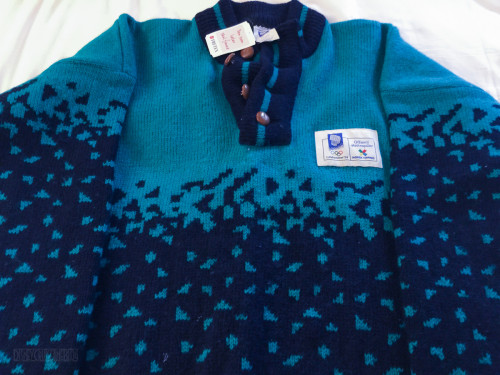 All good things come to an end, we walked into the jam packed tourist souvenir shop which was directly across from the pier. In our family we often reference the need to put on our patience hats for times we know something is going to be terrible, but we do it anyway. I lasted about 30 seconds in the store before I bailed. Emily was the trooper and stuck it out while Isabelle found a Norwegian trinket to bring home.

It was a little after 12 PM when we headed back to the ship. I stayed behind a few extra minutes to take some photos of the Disney Magic at the pier while the ladies went back onboard. 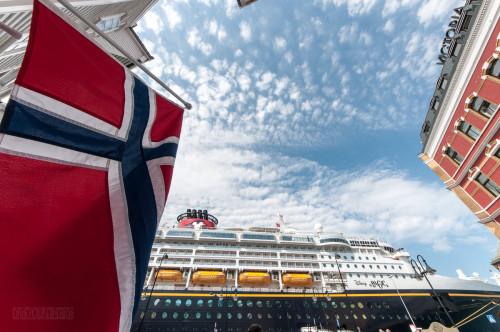 Just before lunch, we started a couple loads of laundry which turned out to be a good time to start as the laundry room was packed with people waiting for an open washer just 20 minutes later when I returned to put the clothes in the dryer. 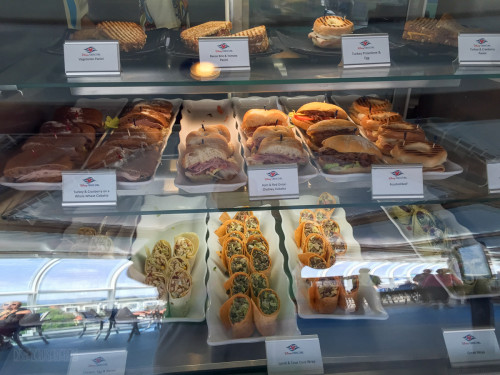 Emily and I grabbed panini sandwiches from Daisy DeLites, while Isabelle enjoyed some cajun grouper from Cabanas, which she enjoyed. However, she was more excited to find mint chocolate chip hard ice cream in Cabanas, as none of us enjoy the soft serve served on deck. When I returned from switching the laundry, our friends Tracy and Bill were sitting at our table. I was still trying to upload the Oslo photos, so Tracy and Isabelle walked around the ship to work on a photo scavenger hunt which was harder than I anticipated. Emily ordered the drink of the day – the Golden Leafs. 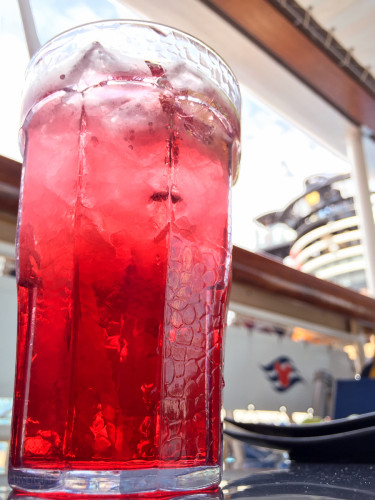 It was white rum, pama pomegranate, peach schnapps, club soda, cranberry juice with mint leaves. On deck, it was served with a lime instead of mint leaves and it was way too sweet for her liking.

When the alarm went off to go get the clothes out of the dryer, we packed up and headed back to the stateroom. I finally managed to upload the last two photos and post the Oslo trip log while we watched a little bit of Peter Pan on TV. Emily and Isabelle went down to the Oceaneer Lab for the open house while I sat in the atrium and imported photos from our phones and memory cards.

Tonight, Emily and I went to Palo, which means Isabelle gets a room service pizza and caesar salad for dinner before heading back to the Oceaneer Lab/Club. Some things just work out; we turned on the stateroom TV and Wreck-it Ralph was just about in the same spot as when we turned it off yesterday before heading to breakfast. When Emily called to order the food for Isabelle, she also ordered our Platinum Castaway Club gift. We chose the prosecco over the fruit platter. We were pleasantly surprised when a Santa Margarita prosecco was delivered. 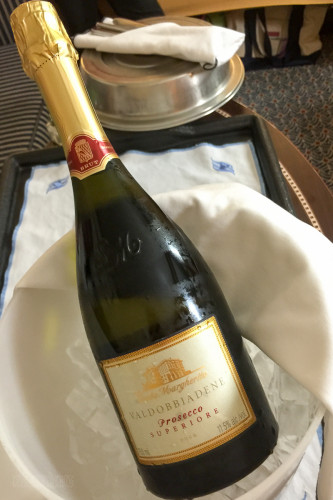 Dinner at Palo was interesting in that it never got dark; it was like we were at brunch and they were serving dinner. As is typical, dinner started with the bread service and the antipasto plate. 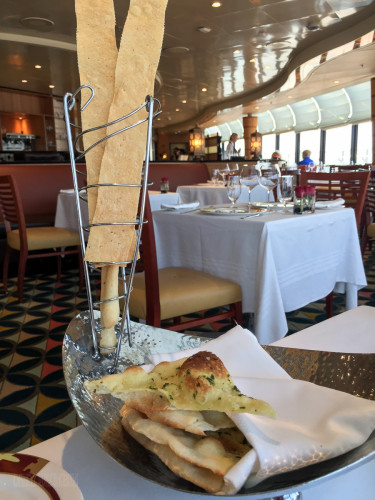 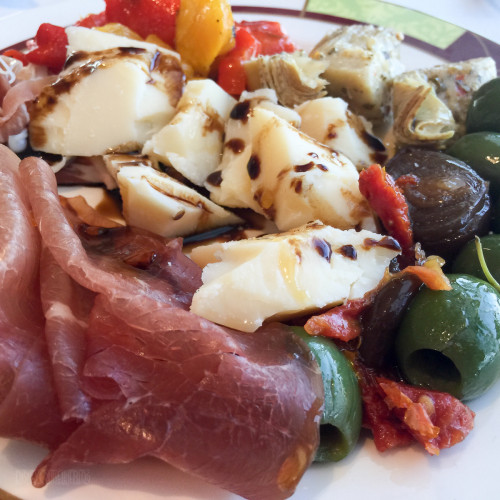 Emily selected the Palo Wine Experience, which started with the Tuna Carpaccio and Lemon Oil Dressing paired with Ferrari Brut. 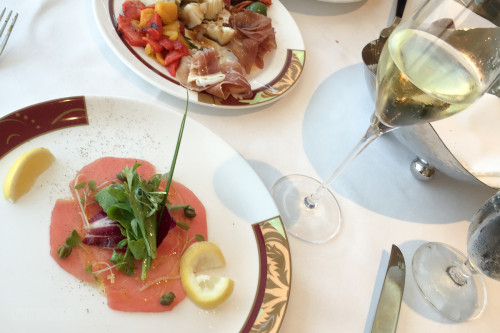 I started with the Tuscan White Bean Soup with Prosciutto and Parmesan cheese. This was flavorful, and for my liking the the prosciutto was not overpowering. 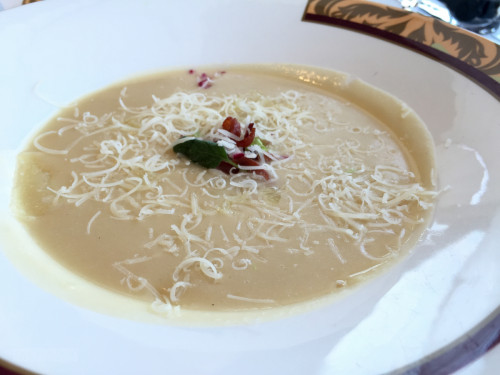 The next wine experience course was the Grilled Portobello Mushroom stuffed with Polenta paired with Summus Costello Banfi. This was Emily’s favorite. She said it was truly delicious and paired very well with the wine. 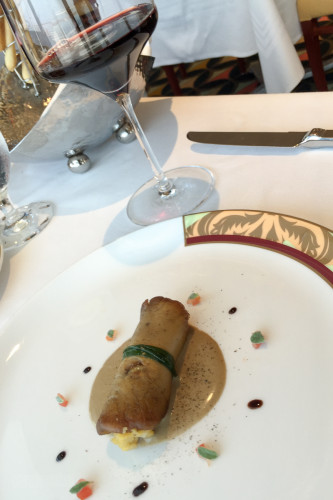 The Lobster and Mascarpone Ravioli was paired with a glass of Cervara della Sala Antinori. The wine was a french version of a Chardonnay, as opposed to a California Chardonnay, so it was super light and Emily’s favorite wine of the pairings. The ravioli was ok – it’s been better but it was still good. The only problem was at this point, Emily was already pretty full….. 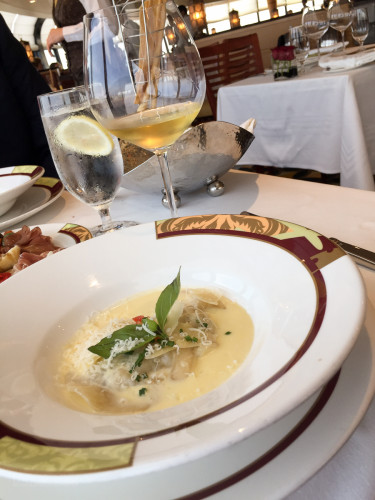 One of my favorite dishes on the Palo menu is the Gnocchi di patate con Gorgonzola e Asparagi. The gnocchi melted in my mouth and the gorgonzola cream sauce was very flavorful. 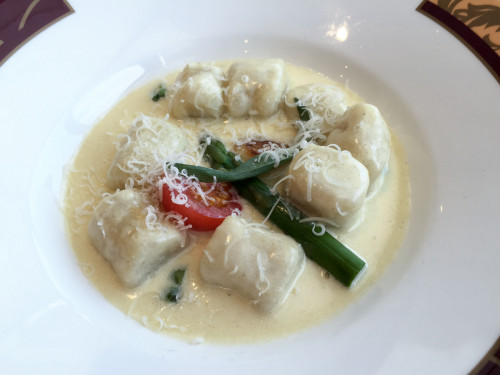 The wine experience continued with the Branzino in Cartoccio or in basic terms, Sea Bass with essentially mashed potatoes. The course was paired with Planeta Chardonnay. Although this was super good – an almost perfectly prepared and seasoned buttery fish – Emily was only able to taste two bites of it. Our server was concerned that something was wrong, and so she gave us a little bit of a break to pace the courses a bit more slowly. 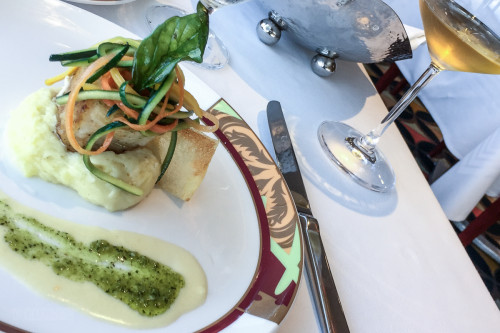 Time for a palate cleanser. The lemon sorbet is always a refreshing treat. 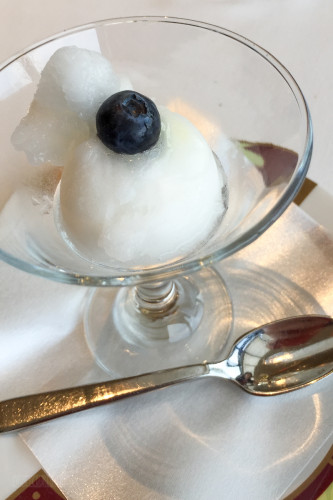 Emily does not eat beef or pork, so the chef was accommodating in substituting the Osso Buco for Grilled Sea Scallops. Unlike the previous time when the Sommelier lost it when he went to pour the pairing red, Ross was even more accommodating and offered Emily Moet and Chandon Imperial to pair with the scallops! They also served her a full dinner portion of the scallops, and she ate one scallop but said it was delicious. She loves Moet & Chandon, so that was a no brainer! 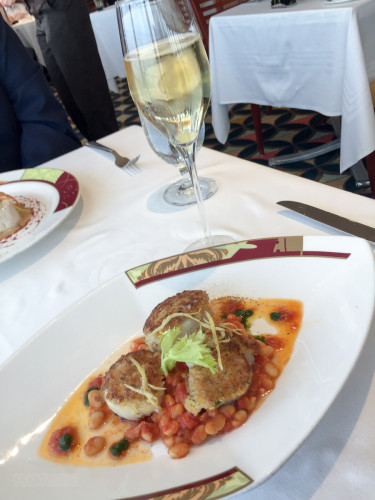 I ordered the Faggotti di Petto di Pollo con Ricotta e Basilico – essentially stuffed chicken breast. The red pepper flavor was present, but not overpowering and the Pinot Grigio reduction was so good; I wish there was more on the plate to sop up with each bite of chicken. 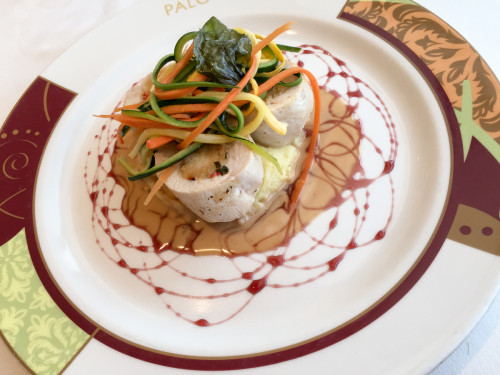 The wine experience ended with the Tartufo paired with Passito Albana Di Romagna. Emily took a few bites and remembered this dessert tasting like nutella and it paired well with the dessert wine. 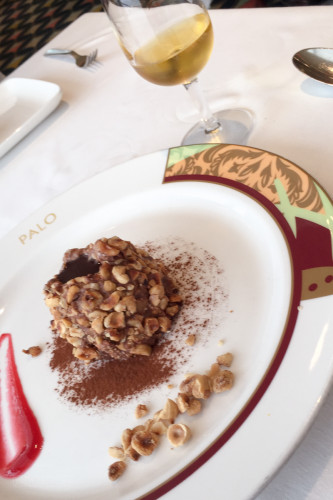 I chose to pass on the chocolate shuffle and try the warm Orange Almond Cake. The cake had a nice orange flavor and worked well with the rhubarb puree, lemon cream and orange fennel. The ring was a bonus and tasted like a fortune cookie. 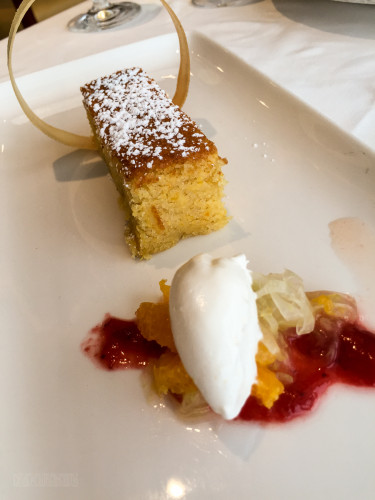 To cap off Palo dinner we sipped on the frozen sparkling wine. 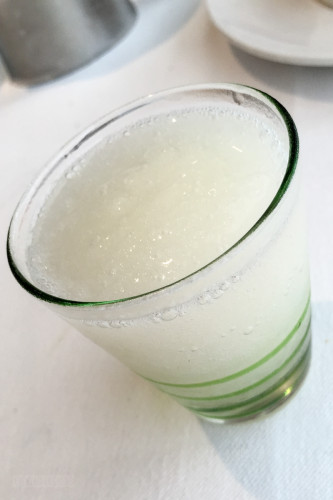 After dinner, we stopped to get Isabelle another snack plate from Cove Cafe, picked her up from the club and headed back to the stateroom. Tonight we set our clocks back an hour and went to bed.