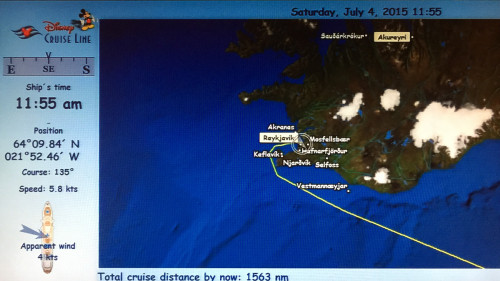 As usual, Em woke up and went to the gym. Due to the time change once again, she was up and there by 6:10am. She decided to lengthen her work out in anticipation of what was to come later that day….Palo brunch.

Once she got back and got showered, we all went to Cabana’s to get Isabelle breakfast. Em & I had our Starbucks Via Vanilla Latte packets to drink, while Isabelle enjoyed her daily plain Mickey waffle, watermelon, and milk. There were some festive treats in Cabanas for the Forth of July. 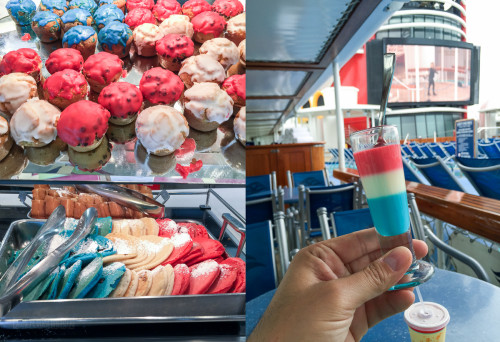 After we finished, we went down to the Promenade Lounge for Disney Trivia and to locate today’s three locations for Anna’s Chocolate Chase Scavenger Hunt. 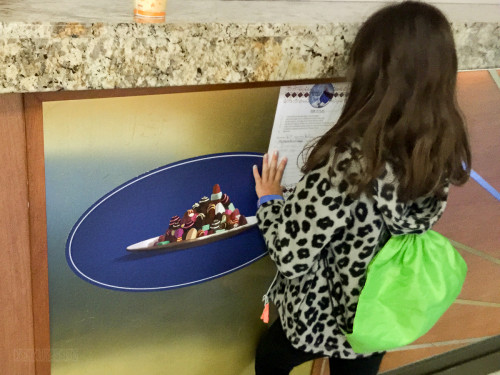 We had a good time. After we were done, Isabelle checked herself into the kids club and we headed back to the room to change for Palo brunch. 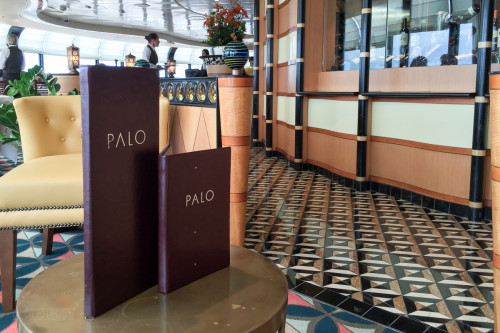 I went into Palo Brunch with the plan to fuel up for a full day exploring Reykjavik traveling from place to place in a bus. We both had some fare from the buffet line (although we only made one trip/one plate). I thought the sticky buns/cinnamon rolls were some of the best I’ve had in Palo. We normally order one pizza of half gorgonzola & grape and half spicy Italian sausage, but today we opted to order two half and half pizzas to try the margharita and goat cheese with sundried tomatoes.

We both enjoy the spiciness of the sausage pizza and the robust flavor of the gorgonzola, although Em doesn’t eat the sausage. The other two options were good, but did not deliver much in terms of flavor. For some reason, I cannot resist ordering the chicken parmesan, primarily for the risotto. 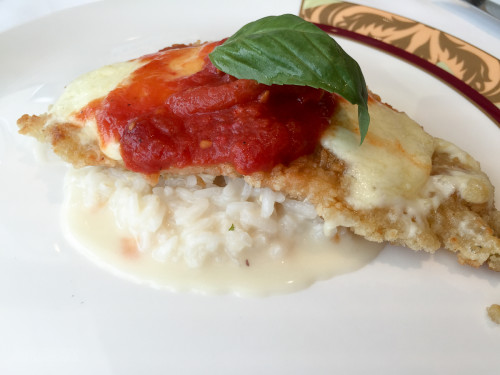 Today, however, the risotto was a bit runny and didn’t have a strong flavor. 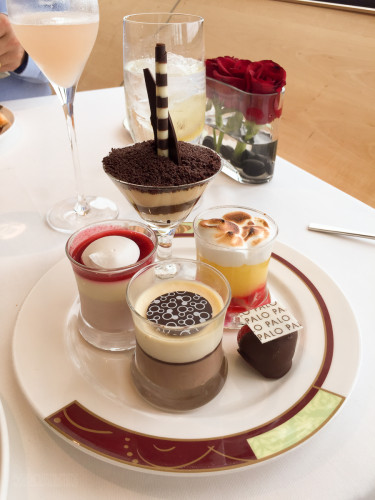 At this point, I was full and didn’t go up to the dessert buffet, but I was glutton for punishment and ordered the peach almond soufflé. It was a bit sweet, but had an awesome almond flavor. The top reminded me of the sugar cookie dough I make at home for cut-out cookies just barely cooked. 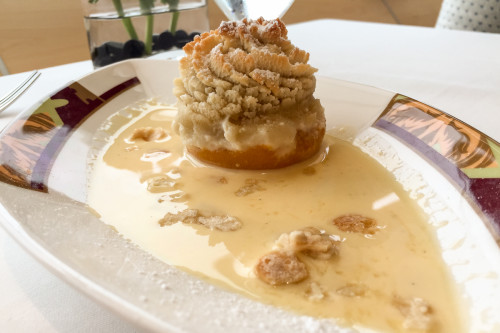 I remember this was a newish offering back in October, but I didn’t save room that day. I hope this remains a regular offering in Palo. We were sure to mention it to the manager, Felice.

After brunch, we took Isabelle to Cabanas to get lunch and enjoyed the violin performance by Greta Salome on the pool deck. During her set, she mentioned this was a unique experience as she could see her house, her parent’s house and her grandparent’s house as we were sailing into Reykjavik.

The wait was finally over — we finally made it to Iceland and were permitted to go ashore! 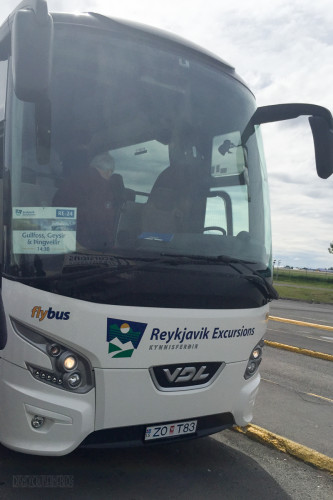 Emily pre-booked a 6-hour tour with Reykjavik Excursions to Þingvellir, the geothermally active valley of Haukadalur to see the Geysir, and Gullfoss waterfall, known together as the Golden Circle. 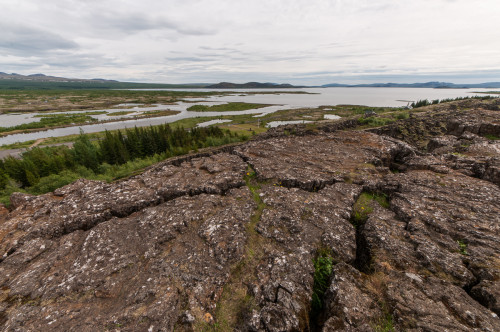 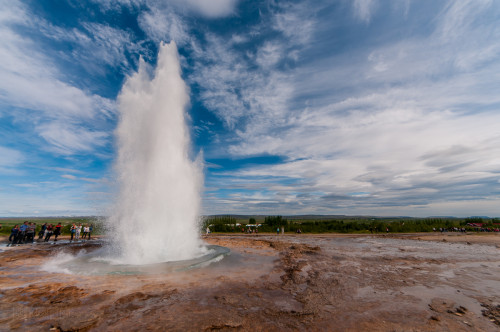 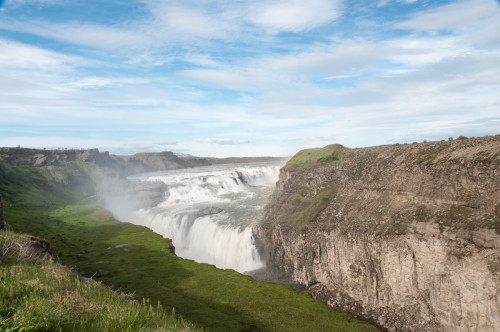 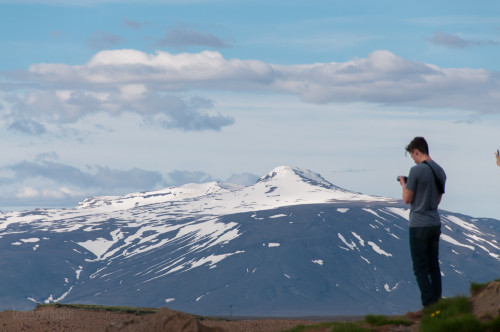 The tour was great, and the bus had free WiFi. We paid about $135 for the tour for Emily and I (kids were free). I think a full review of this tour is in order at a later time, plus I have some video from the Geysir to share. Overall, we all enjoyed the tour and it was a tremendous deal.

We returned to ship, ladies took showers and went to bed. We missed dinner and so I went up to Cabanas which was offering a buffet for a light sampling of options, as I was still working off the Palo Brunch. When I retuned to the room, everyone was asleep so I headed back out with my laptop, grabbed the patriotic drink of the day, the Patriot, and started to upload more photos. 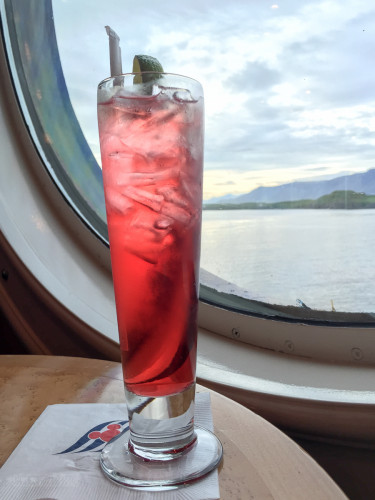 In an attempt to pilfer free WiFi from the port tourist shop, I headed up to the pool deck. I ran into my cousin and his family and watched a bit of ‘Remember the Titans’ on Funnel Vision as I waited for sunset, which was set for 11:51 PM.

Since we were spending the night in Reykjavik, there was a 24-hour gangway for passengers and crew to come and go as they please. The sun was beginning to fall, but it still does not get dark, the sky just comes alive with vibrant color. The Port of Reykjavik is not all that photogenic & there are a limited amount of locations to set up to photograph the cruise ship in port. I made a few friends with port security, as I figured it was better to ask where I was allowed to walk rather than find out I crossed some imaginary line after the fact. I first headed out to the break wall and set up for a few shots down by a group of guys fishing. 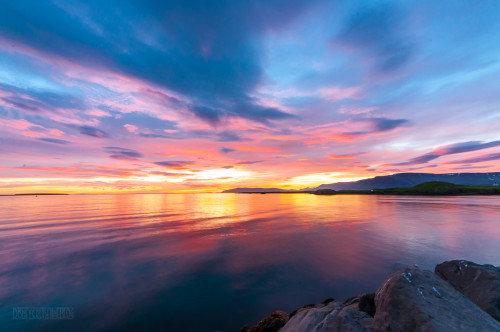 The break wall provided a spectacular view of the sunset and a nice view of the Disney Magic’s stern. It would have been nice if the ship was docked facing the other way, but such is life. 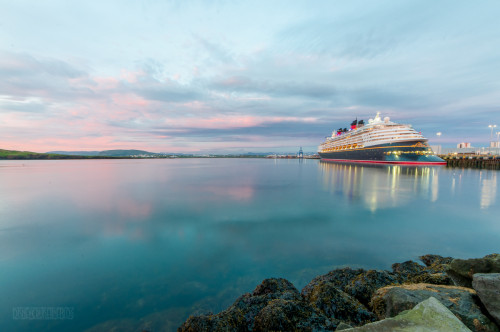 Leading up to this cruise I said I was going to sleep on a park bench since we were overnighting in Reykjavik. I found a bench on the way back towards the ship from the break wall. 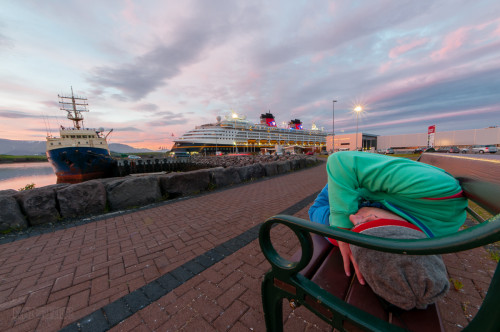 In 2011, I took a photo of the Disney Magic in Key West that is my favorite of all my DCL photos. I figured it was time to revisit this shot, but instead of a blue hour shot, why not go with a 1AM Icelandic sky. 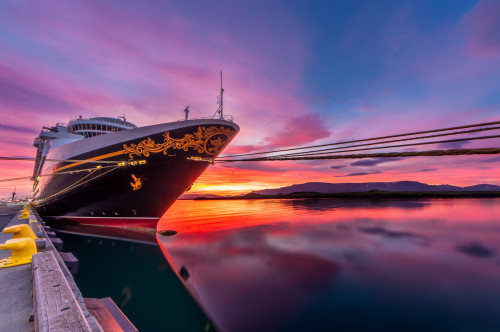