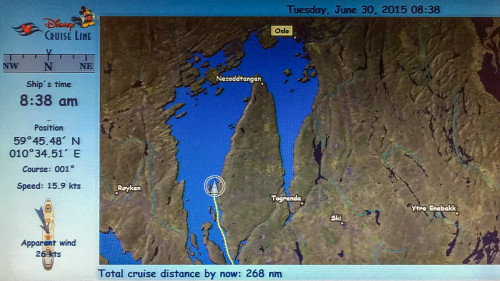 The inside staterooms is proving to be one of the best ideas ever after we all had a good night sleep in a pitch black room! Emily was up and at the gym when it opened at 6 AM. The workout was very scenic on this morning as the ship was sailing into Oslo. 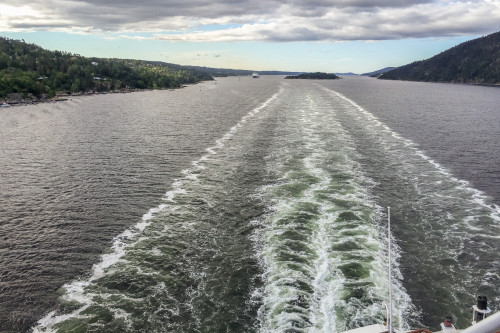 We all got ready and headed up to Cabanas for an early breakfast and a little shopping at White Caps and Mickey’s Mainsail with just a few other shoppers roaming around.

The all ashore time was scheduled for 10:30 AM allowing us to play Disney Trivia in the Promenade Lounge. Our group tied two others which led to a sudden death game of rock, paper, scissors. Isabelle played scissors to the other groups paper to take home the elusive DCL keychain. 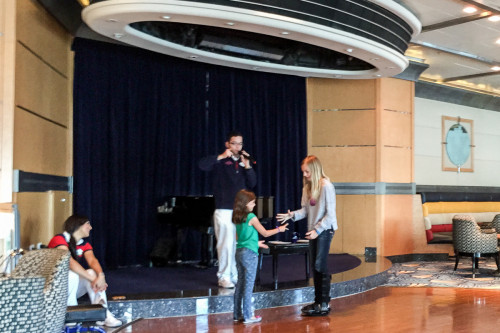 Our plan for the day was to see Oslo on our own using the Oslo Pass with our friends, Heather, Tony and their son Jacob. We met outside Keys at 10:15 AM and head down to the gangway to find out we were already cleared and permitted to go ashore. We heard the all clear announcement a few minutes later as we were walking away from the ship and activating our Oslo Passes on our phones. The Oslo Pass is basically a QR code that you can use for the public transportation system and admission to a number of key locations around Oslo. 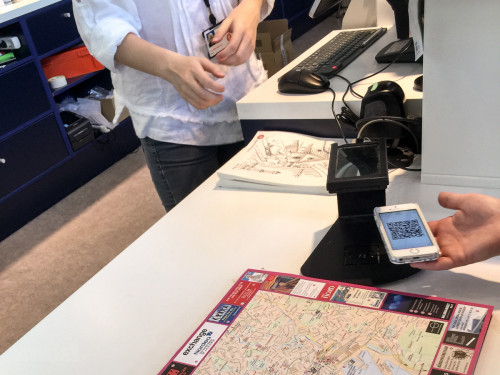 The Oslo Pass suggests a few locations to find free WiFi to activate the pass which we prepaid for a few weeks ago. Rather than go into all the details now, I think it would be better served to do a full review of the Oslo Pass in a separate post. I will give you the Cliff Notes version… We’d do it again in a heartbeat. Moving on to our adventure in Oslo.

It took us a few minutes to get acclimated to the area and get ourselves in orientated with the public transit map we had. 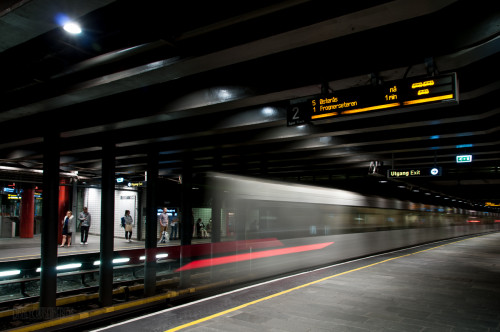 We walked to the metro station to head to our first stop, Holmenkollen, the Oslo Ski Jump facility. 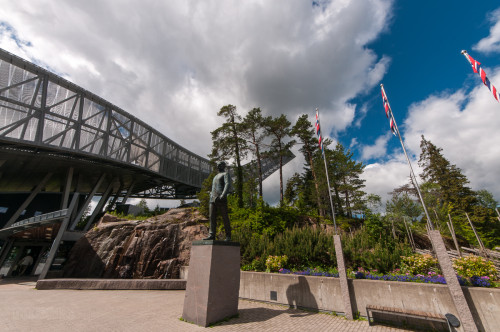 The short (maybe 10-minute walk) from the metro station to the ski jump facility included some walks up steep paths. The Oslo Pass provided admission to the museum and access to the elevator to the very top of the ski jump where the viewing area was. 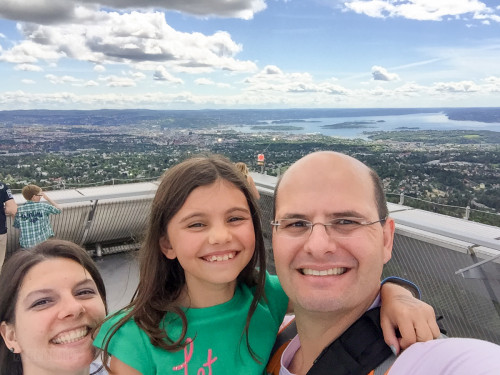 If you look behind us you can see the Disney Magic in port. 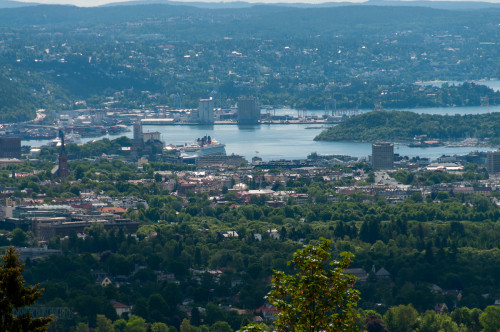 During the off season, visitors can choose to zip line down the ski jump. I thought this was a great use of the venue and about the closest way to experience ski jumping without actually doing it. 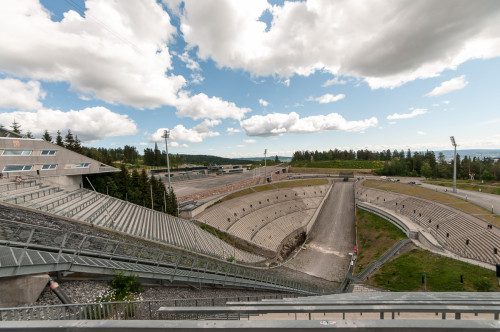 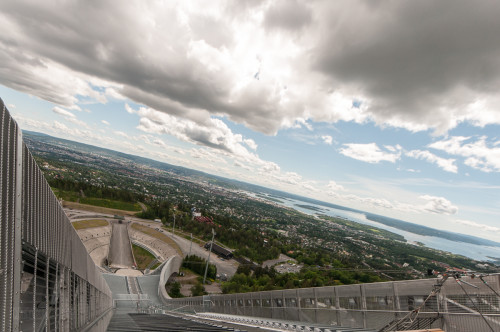 It looked like fun, but we had many other places to see. We did stop in the cafe where our friends enjoyed some Norwegian waffles and Emily had a glass of wine before heading back to the metro station.

Emily's obligatory wine in #Oslo (it's a french wine tho) pic.twitter.com/tcaDWqVfG3

Originally, I was not that excited to visit the ski jump. My parents took me to the ski jump facility in Calgary when I was… oh, it was sometime in the late 80’s early 90’s and I figured that if you’ve seen one ski jump, you’ve seen all of the ski jumps. Well, this was not the case at all. The view from the top was phenomenal. You also had a great photo op with the Disney Magic in the background. I’m so glad I kept my mouth shut and trusted Emily & Heather on this one.

It was about 1:30 PM and we still had a few more places that we wanted to see before the 5:45 PM all aboard time. We made our way back to the metro station taking it to the closest stop to the Vigeland Sculpture Park. The city of Oslo funded master sculptor, Gustav Vigeland who created 150 sculptures in stone, iron and bronze. I was completely unaware of what we were going to see when we arrived at the park. So this is a good time pause and write the following disclaimer. The majority of the 150 sculptures in the 80-acre park feature the nude human body as is commonplace with European sculptures. I will warn you now that some of the images below may not be acceptable for all readers of various ages for a variety of reasons. If the statue of David pushes boundaries for you then please skip this next section. I would like to note the Vigeland Sculpture Park is part of some of Disney Cruise Line’s Port Adventures in Oslo & they do offer a disclaimer and have it set up for guests to sit out this portion of the excursion. 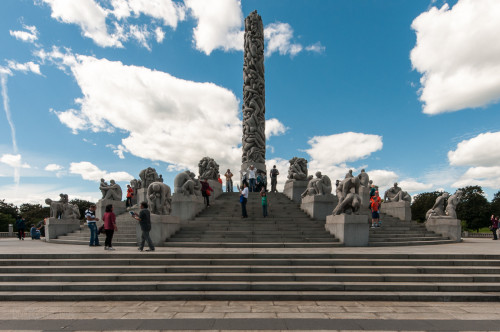 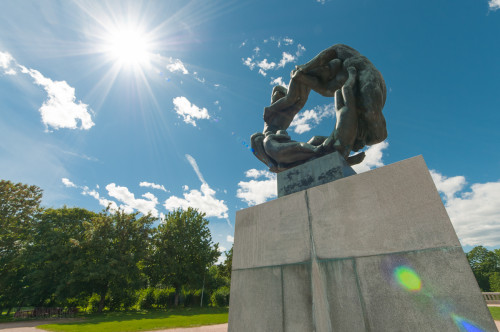 Our Oslo journey continued as we left the sculpture park and walked to a few blocks to pick up the #30 bus to get to the Viking Ship Museum. Much to a few people’s dreams on Twitter, we were not permitted to touch the Viking ship on display a la the Spirit of Norway film from Epcot’s Maelstrom, which has since been gutted for a Frozen attraction in the Epcot World Showcase’s Norway Pavilion. 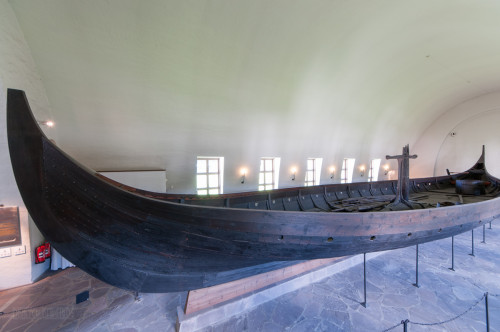 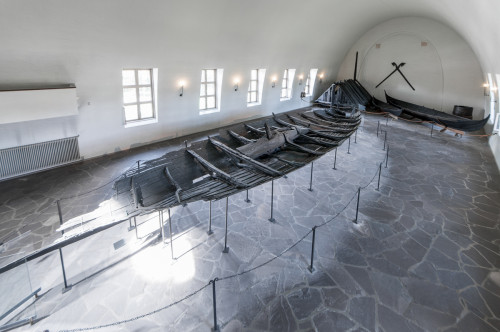 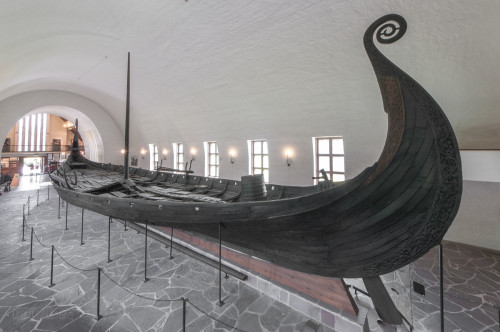 On display in the museum (which admission was also included with the Oslo Pass) were three Viking long ships dating from 800-900 AD. Guess who we found at the ticket office… Uncle Scrooge! 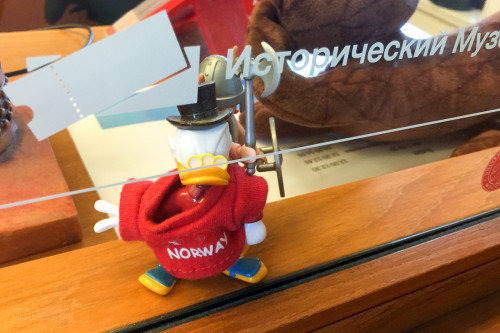 DCL’s description of this port adventure states photography and videography are not allowed in the Viking Ship Museum, however unless I missed the signs this was not the case. Additionally, none of the guards on duty took issue with anyone, myself included, taking photos. The museum has  three Viking long ships, dating from 800-900 AD.

The last place we walked over to was the Norwegian Folk museum, an open air museum which was just down the road from the Viking Ship Museum. We were short on time so we scanned our Oslo Pass QR code in the gift shop for admission tickets and made a b-line to the Stave Church, which was used as inspiration for the one at Epcot’s Norway Pavilion. 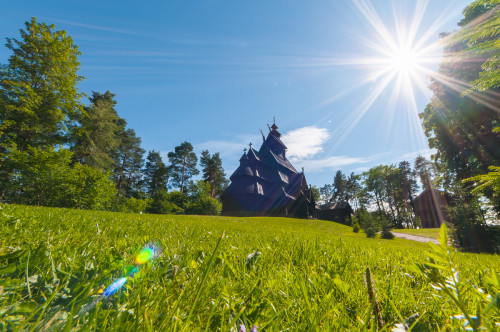 The kids had a chance to go inside, but by the time I was done taking pictures outside, it was time to head to the bus stop. We left about 4:50 PM and made it back to the pier area by 5:05 PM using the city bus. 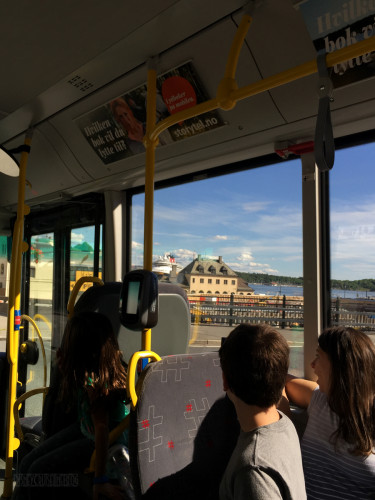 We still had 40-minutes to spare before sail away, which would have given us time to for a quick peak inside Akershus Fortress, but with 6 PM dinner, it was time to head back to our the staterooms to get ready.

I will be honest and say it was much warmer than we expected – the temperature was somewhere between 70-75 degrees F, and we were all in a t-shirt and jeans and pretty sweaty from walking around in the sun. We expected much cooler temperatures, but it was a pleasant surprise. 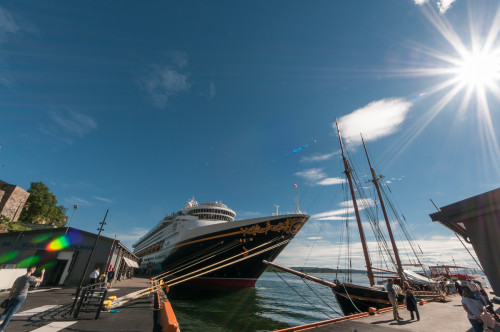 I believe we set a personal best for our family to get back to the stateroom, have everyone get showered, AND be on time for dinner. Tonight’s dinner was in Carioca’s with an augmented menu. A few notable items dropped from the menu were the mahi/shrimp/lobster skewer on a bed of quinoa (Emily’s favorite dish of all of the MDRs), as well as the Jose Carioca trio of meat skewers. Thankfully, the empanadas and black bean soup were still on the menu. The empanadas were not as spicy as they have been in the past, but they were very flavorful! I ordered the halibut & it was delicious. 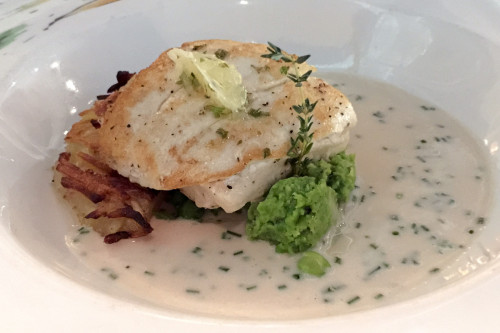 Today at 7PM, the Limited Edition pin went on sale in the gift shops around the ship with a limit of two per stateroom. Based on prior onboard LE pin releases and the unknown edition size, I was elected to go to to Mickey’s Mainsail to try and get a pin. I gave Emily my dessert selection to order for me and headed over. Well, it turns out there was no need to leave dinner as the LE was 2000 pins. I was happy to hear the cast member tell the persons in front of me in line he could only buy two rather than the handful of six. Granted, she did tell him that he could just walk over to another register and buy two more from another cast member, effectively providing him with the loophole. 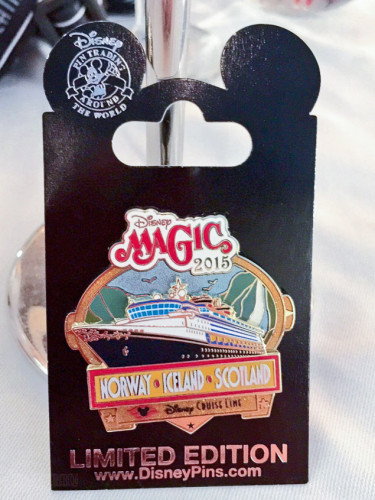 I was able to get back to Carioca’s just in time for our dessert. I opted to try one of the new items, Aarhus Orange Almond Torte, after reading it had orange in it. I am a sucker for orange as you will find out later this week… 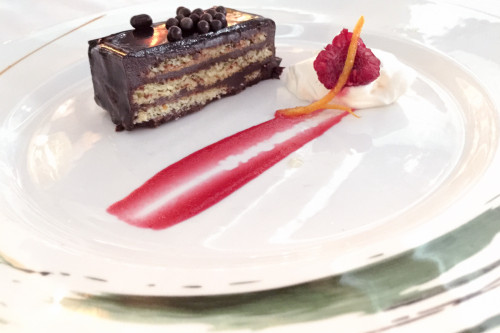 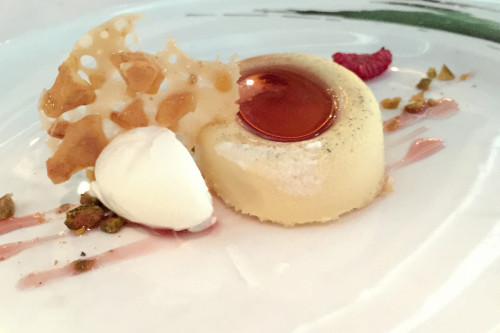 For the first time… NOT GONNA DO IT… on our last four sailings on the Magic, Isabelle has missed the opportunity to experience the Oceaneer Club’s Marvel Avengers Academy and get her own ID card. So right after dinner, she was eager to head up to the OC to finally take part in this activity. It was a fun activity and one she’d do again if the schedule works out on the next Magic cruise.

While Emily took Isabelle to the OC, I stopped down at the Promenade Lounge for the Drink of the Day: Double Crown. 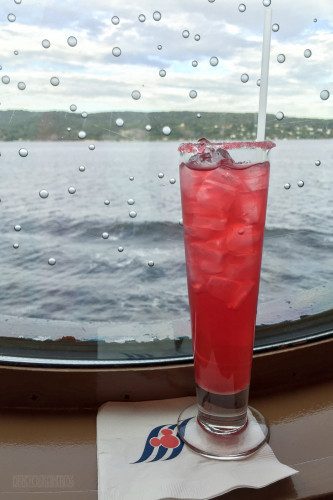 It was flavorful and sweet, but didn’t have much of a kick. We decided to go hang out in Keys, where we finally met up with my cousin and his wife. They have late dining, so up until now, our paths have not crossed. Emily had a glass of Taittinger while we chatted. 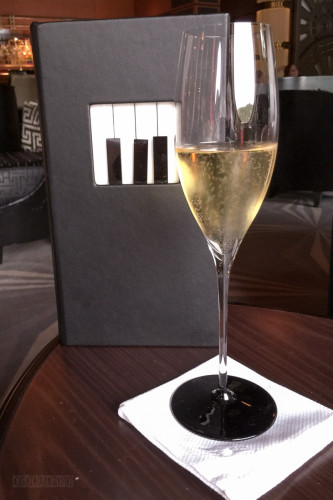 It was just about time for late dinner, so our family reunion adjourned and we both headed to the club to pick up our kids. I took a detour up to Cove Cave to get Isabelle her usual evening post-kids club snack plate of carrot & cucumber sticks, crackers, parmesan cheese and grapes. This is one area on the new ships I miss – the Vista Cafe on deck 4. Essentially, it’s identical to the Cove Cafe, but family friendly (& much easier to get the nightly snacks from). 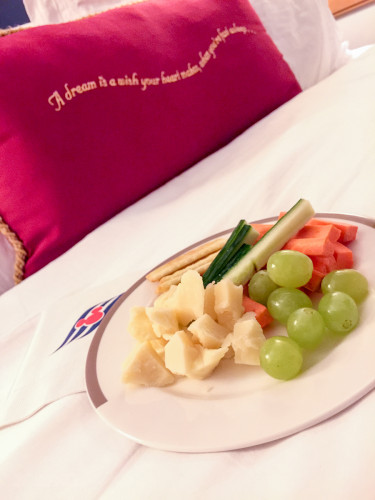 I am having an internal struggle. I want to hang out on deck because it is still daylight, but in reality it is 10 PM, and after our adventure today I need to get some rest before another port day tomorrow. My goal is to stay up for the Freezing the Night Away deck party later this cruise as well as stay out late at Reykjavik since we are overnighting in the Icelandic port.