Personal Navigators, and other handouts from the Halloween on the High Seas 6-Night Western Caribbean Cruise from Port Canaveral. The Disney Fantasy set sail from Port Canaveral on October 9, 2016. During this cruise, the ship was under the control of Captain Fabian Dib. The Cruise Director during the sailng was Natalie Bailey.

This is the revised 10/9/16 sailing that was shortened from a 7-Night Western leaving on 10/8 due to the track of Hurricane Matthew which resulted in a back to back itinerary changes for the Disney Fantasy. 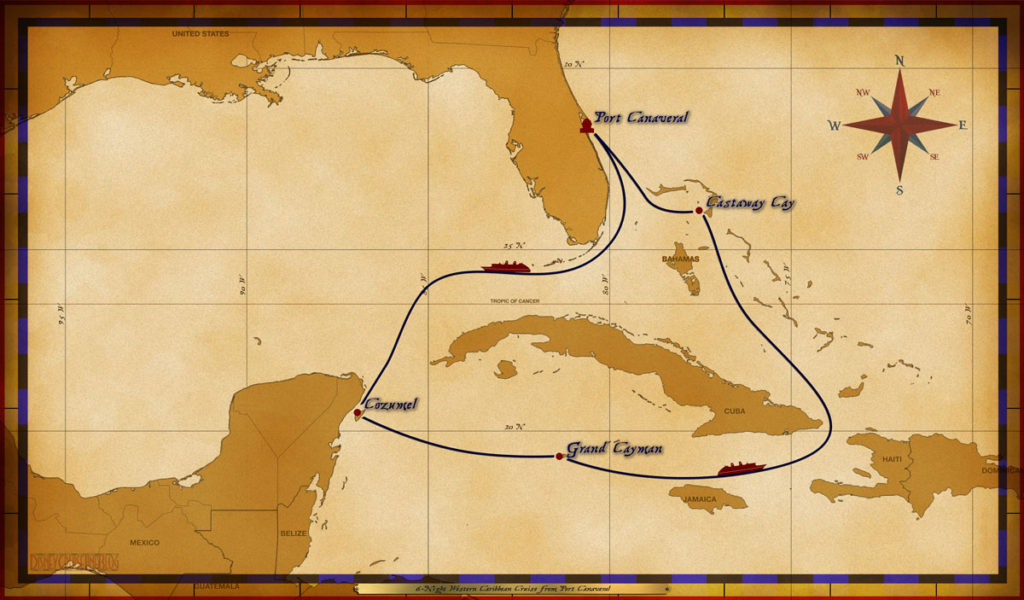 Thank you Ed Lopes for sharing the navigators and the following details on this unique voyage.

I heard from several passengers who had talked with various officers that there were ~2400 passengers on board…about half full. That matches my perception, as many lounge chairs on Decks 12 and 13 were never deployed and there were no lines to speak of, except on day 1 at the Port Adventure Desk (which makes sense seeing the cruise changed from Eastern to Western).

Castaway Cay made out extraordinarily well from Hurricane Matthew. You could tell where some vegetation was missing on the tram ride, but what remained appeared to have been trimmed very nicely alongside the road, and the roads and walkways were clear of any debris. I know my pics gave you the macro view, but I didn’t see anything operationally out of the ordinary on this visit (this was my fifth Disney cruise and fifth visit to CC).

If you have any navigators you would be willing to share, please send me an email. If you would rather upload the files you can use our upload form.