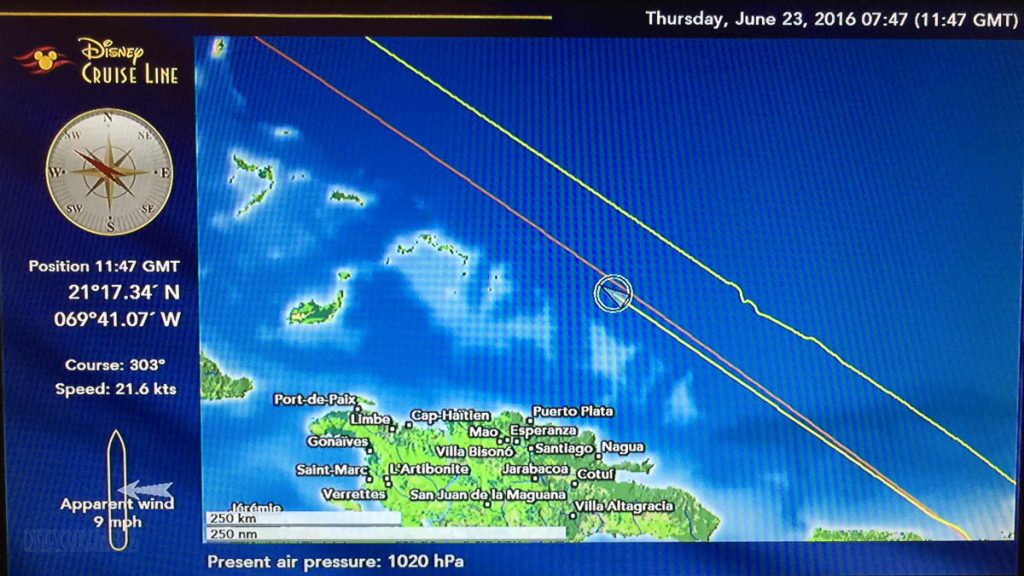 Our day at sea started like most mornings, with Emily at the gym. She laughed because she missed rope drop and got there ‘late’ at 6:08am. She finished up around 7:10am and notes that it was packed as usual – in fact, she had a hard time finding space around the free weights because there were so many people working out there.

She came back to the room and showered, and then Isabelle & I got up. We got dressed, got our pool bag ready, lathered on our sunscreen and headed up to Cabanas for breakfast. 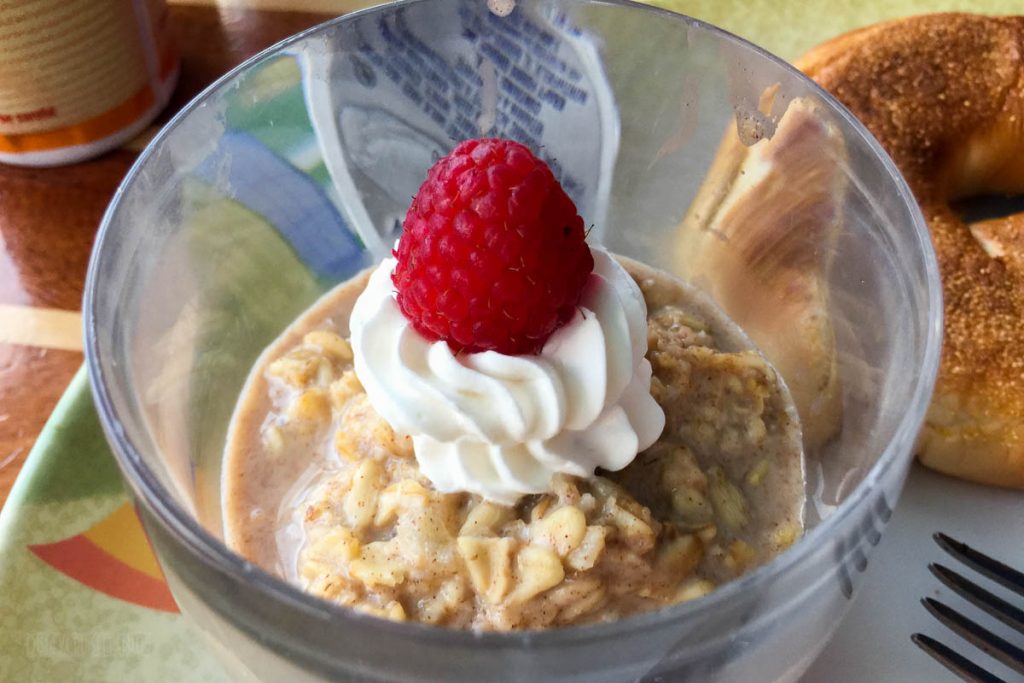 Usually once in the cruise we go to the sit-down a la cart breakfast (on the Fantasy it is in Royal Court), but this cruise we have just been running up to Cabanas. Come to think of it, we haven’t done the sit down a la carte lunch in a while, either…..

We finished breakfast around 8:15am and headed out to the pool deck. The first Funnel Vision movie was at 8:30am and was Dumbo, and the pools don’t open until 9am. 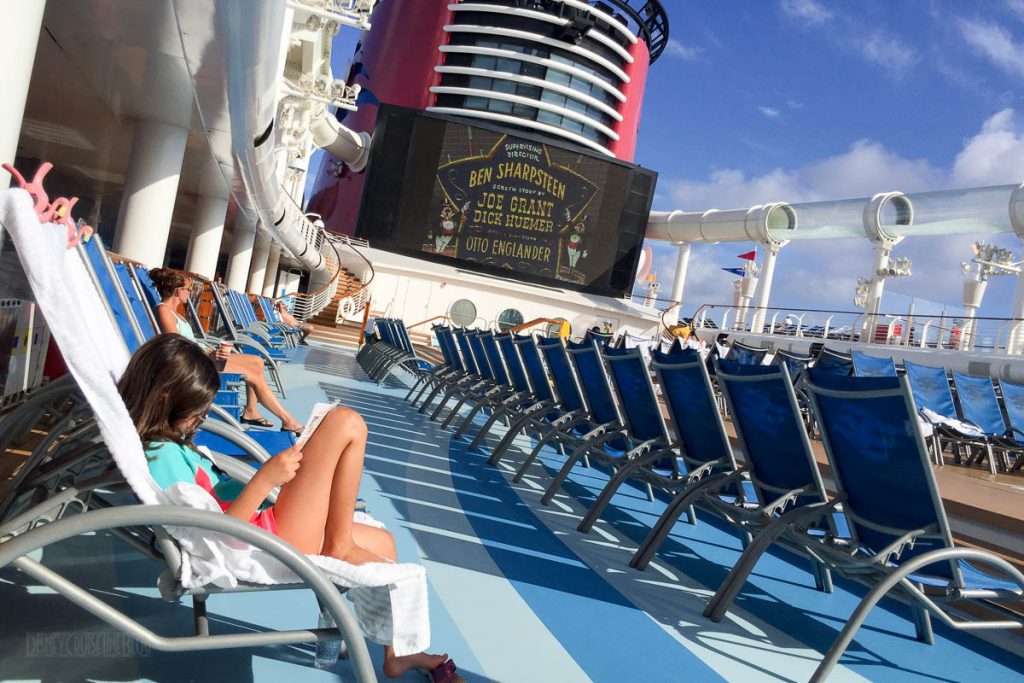 The AquaDuck wasn’t supposed to open until 9am, but it opened about 15 minutes early, so Isabelle dragged me up for a spin. Emily & I will go with her if the line is short (which we define as not seeing anyone when you look up in line on the stairs). This cruise, the line has been long, even when it is typically short (when you return to the ship on port days).

Once Dumbo was underway, we did a whole lot of nothing. The second film of the morning was Brave which is one Emily has never watched. We were quite thrilled to see different movies playing on our sea days. 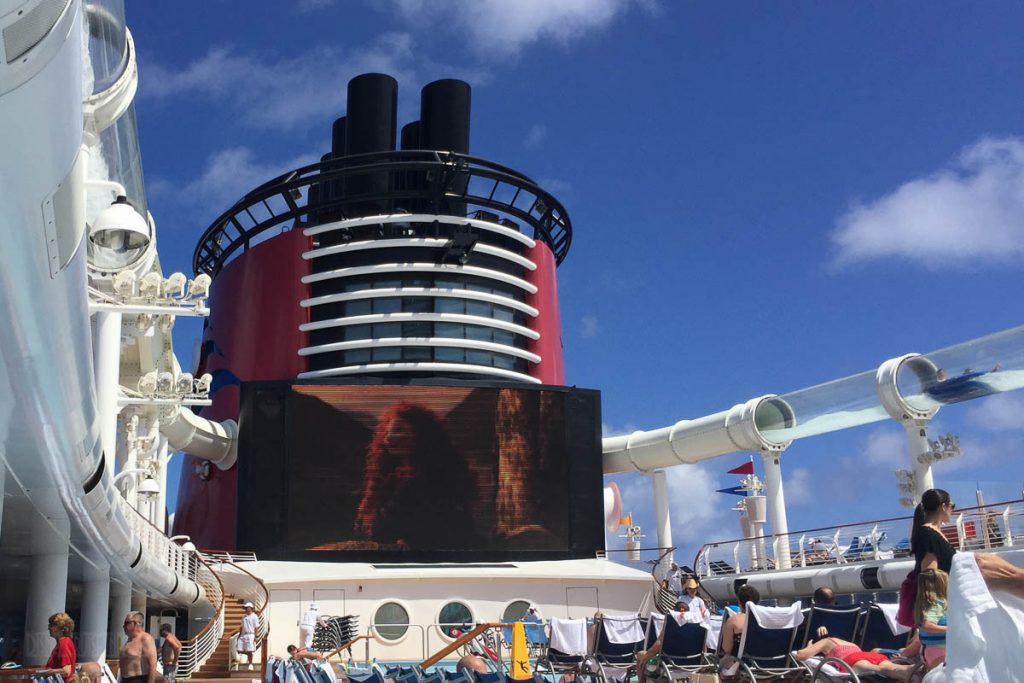 For lunch, we picked up some pizza and some wraps from Flo’s. We saw our server stationed at Luigi’s, and were really looking forward to soft pretzels. However, we were informed they have not been available for some time due to “not enough time.” Boo. 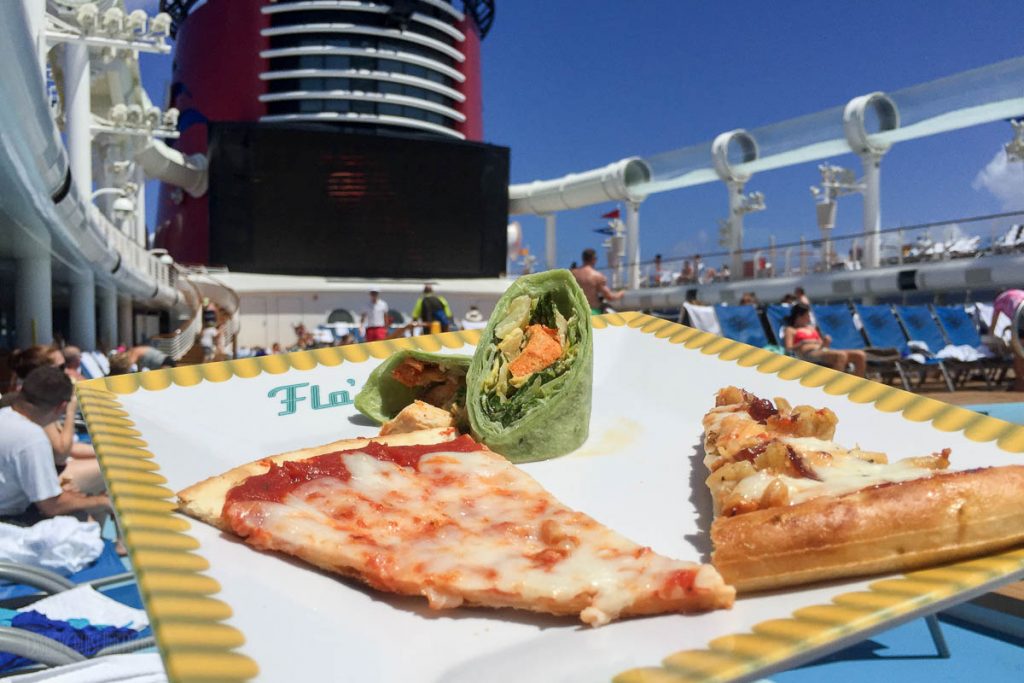 When Brave finished, Emily and I went to check out Satellite Falls for a bit. I really enjoyed the quiet, serene environment and could have taken a nice afternoon nap there if we had time. 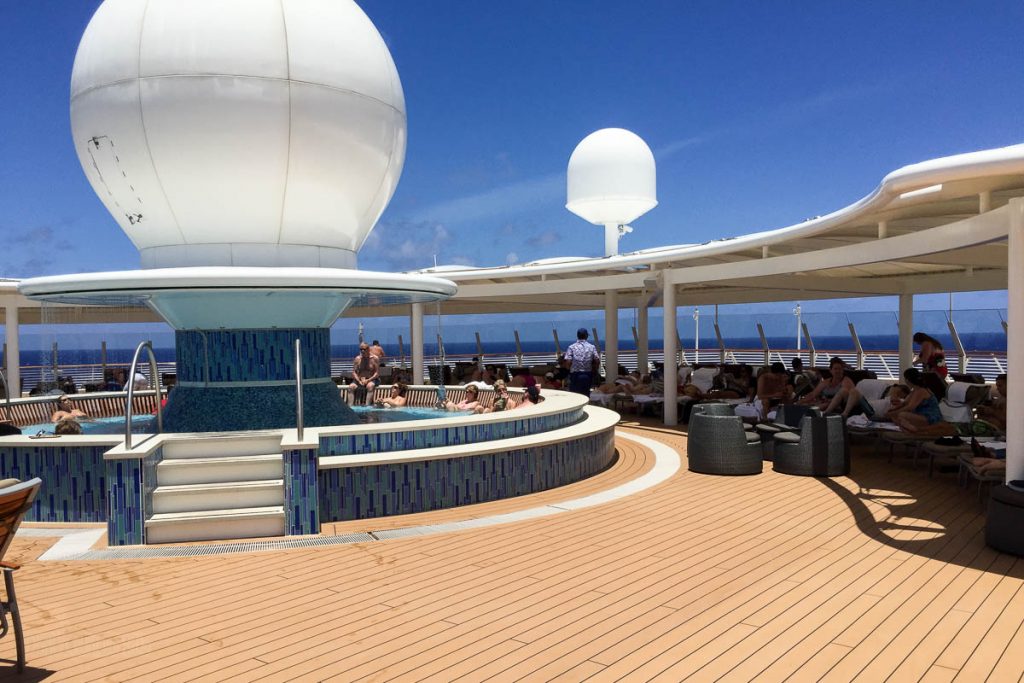 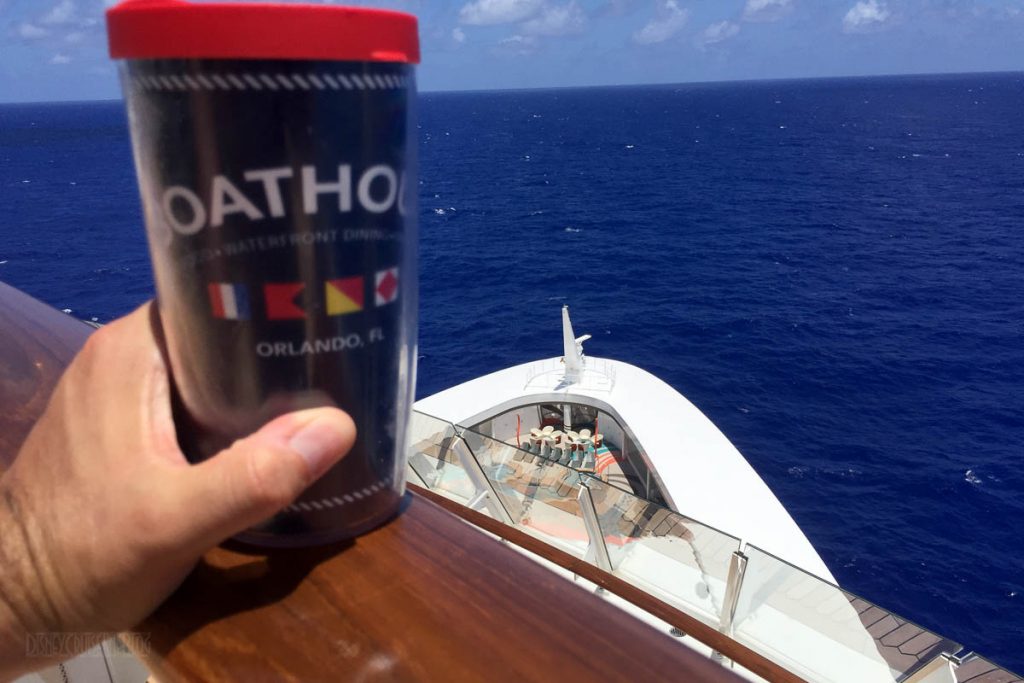 We met back up with Isabelle for a competitive game of Goofy Golf. 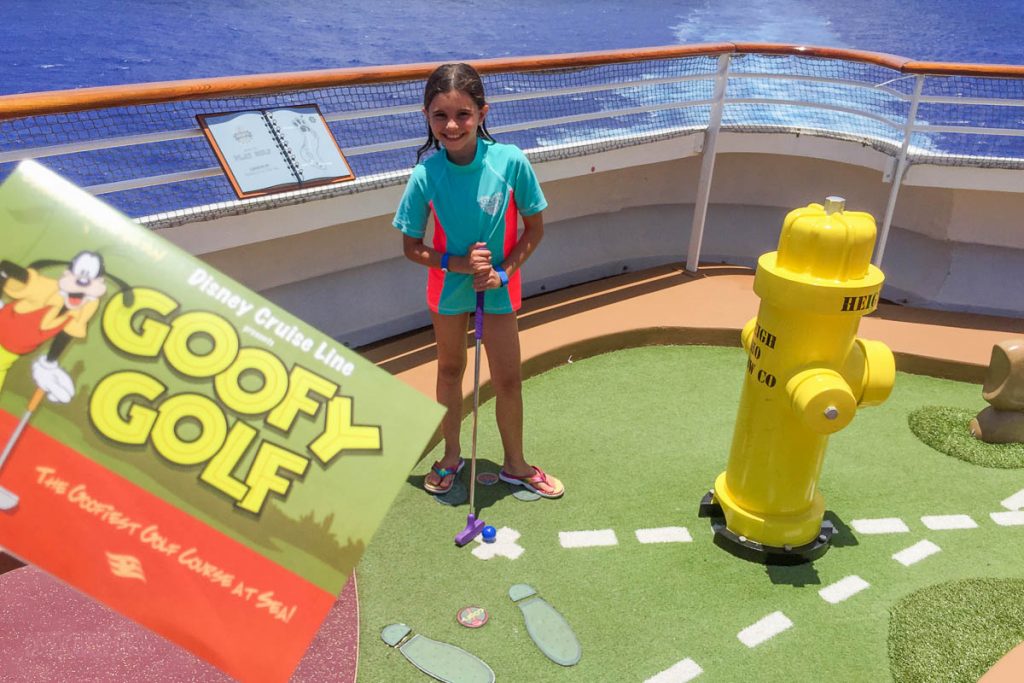 We returned to the room to get cleaned up and finished Bedknobs & Broomsticks before heading off to the Walt Disney Theatre for Lynn Trefzger’s matinee show. This is our first time seeing Lynn’s comedy and ventriloquism show which ended with a very funny segment with three members of the audience. 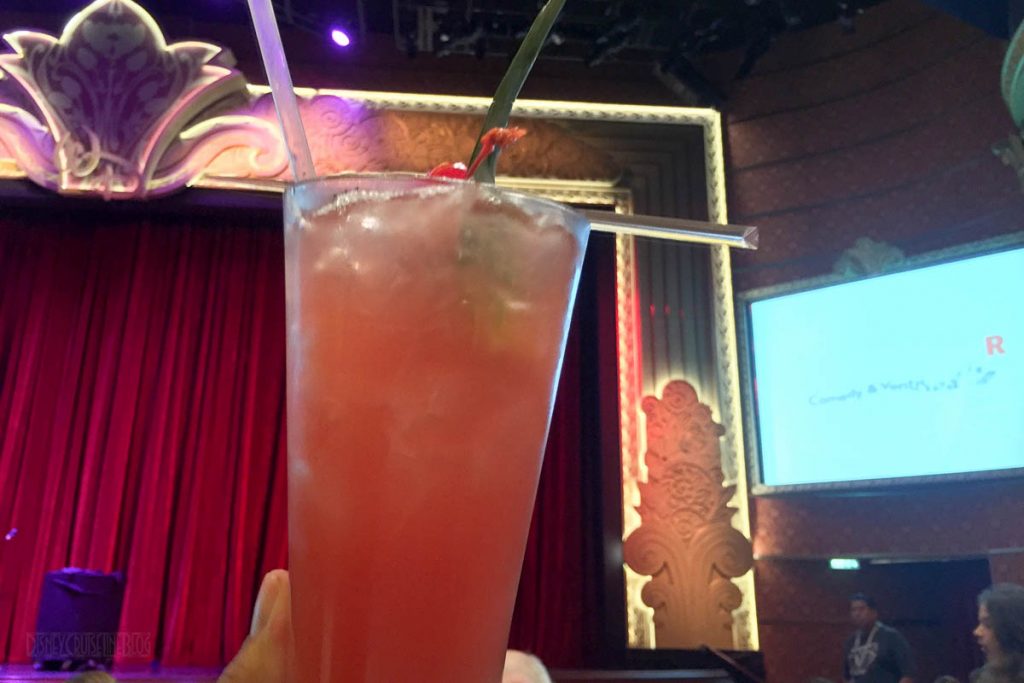 Following the show Isabelle went to the Oceaneer Club, while we returned to Remy for the Pompidou Dessert Experience. This experience is something that deserves its own post. I will just say that we enjoyed the desserts. 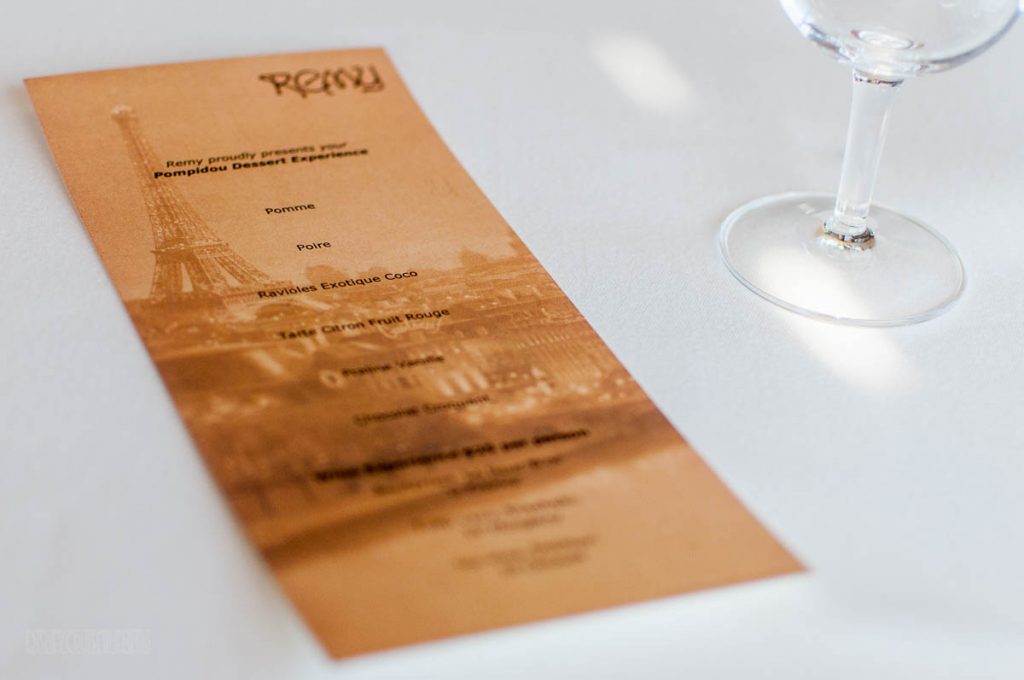 Isabelle considered going to see John Cassidy’s magic workshop, but she was having too much fun in the club to leave. She was waiting for us when we returned from Remy. 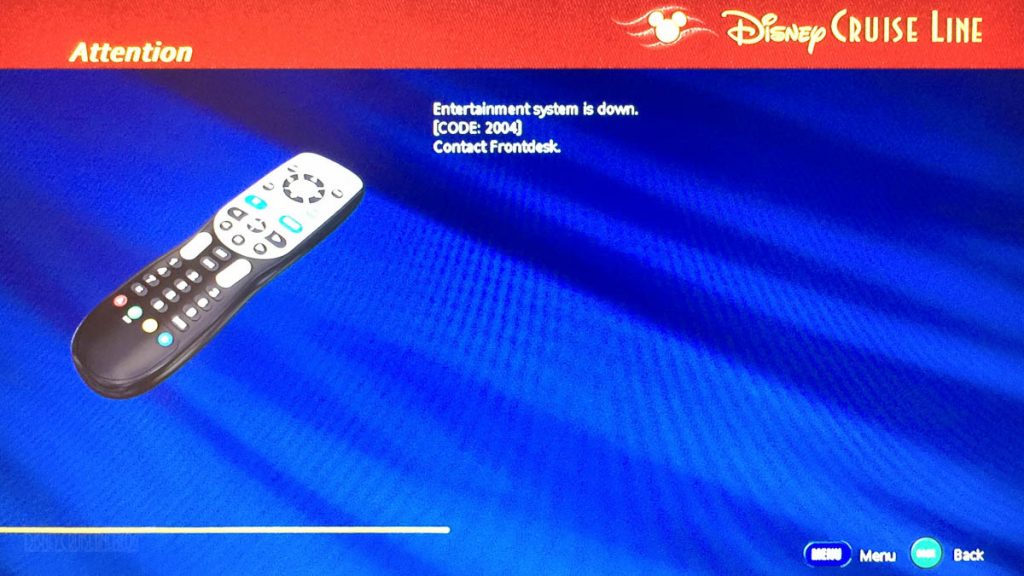 We had some time before dinner and decided to start Pete’s Dragon, but it wasn’t working. So, we had the bright idea to jot down all of the On Demand offerings, which I wrote a note to write up when we get home. 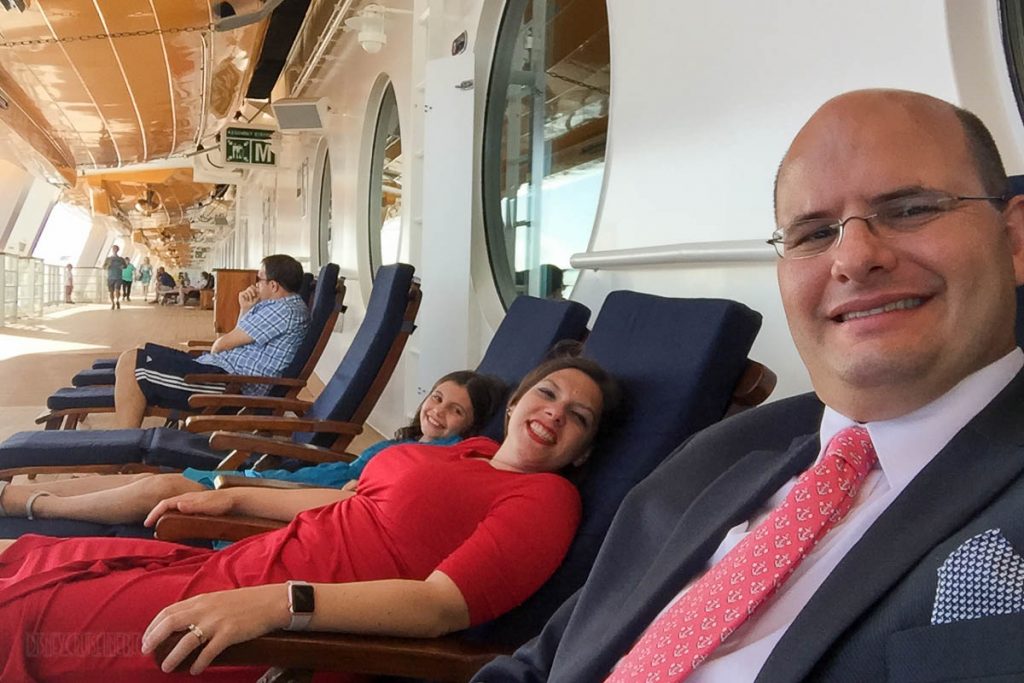 We headed down to dinner early and waited in the family’s new favorite spot… the lounge chairs on deck 4; although, I keep reminding them this was always my favorite place to relax 🙂 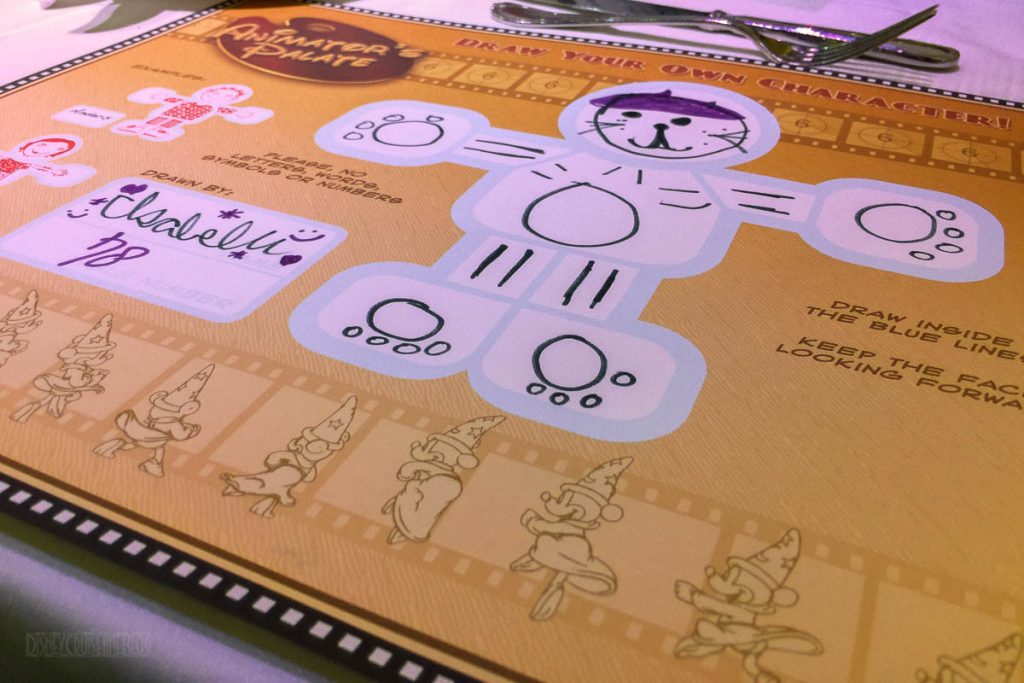 This evening’s dinner was the Captains Gala menu in Animator’s Palate with the Drawn to Animation show. Due to the show, the first two courses are pre-fixed so we were served the Appetizer Sampler Platter featuring Smoked Duck Breast, Smoked Salmon Tartar and Shrimp. 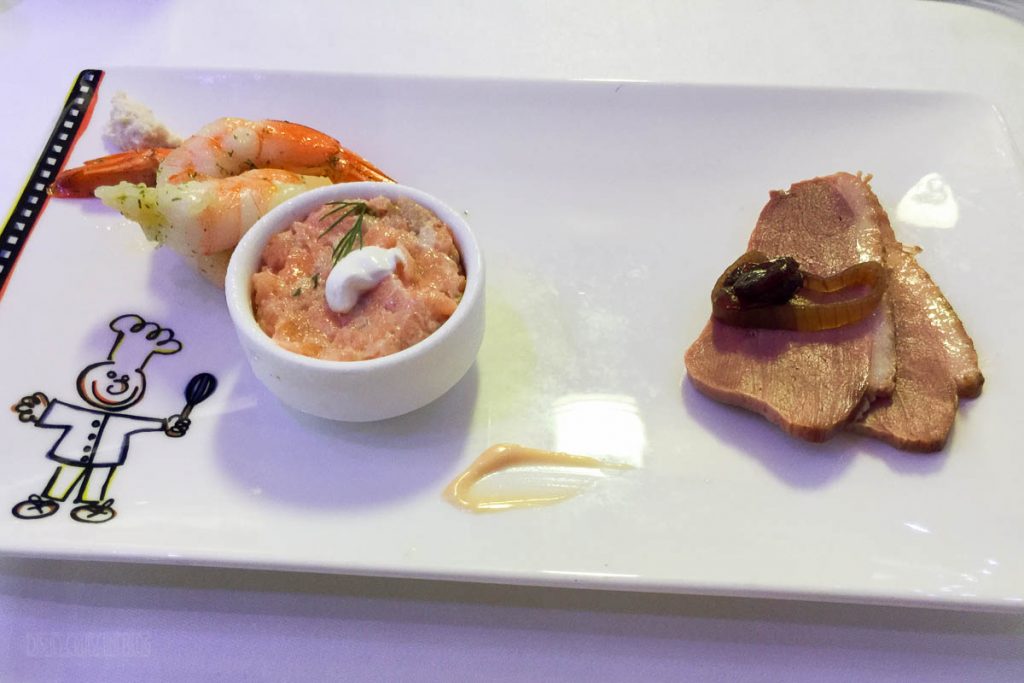 The second course is the Macaroni Cheese and Baked Potato soup. 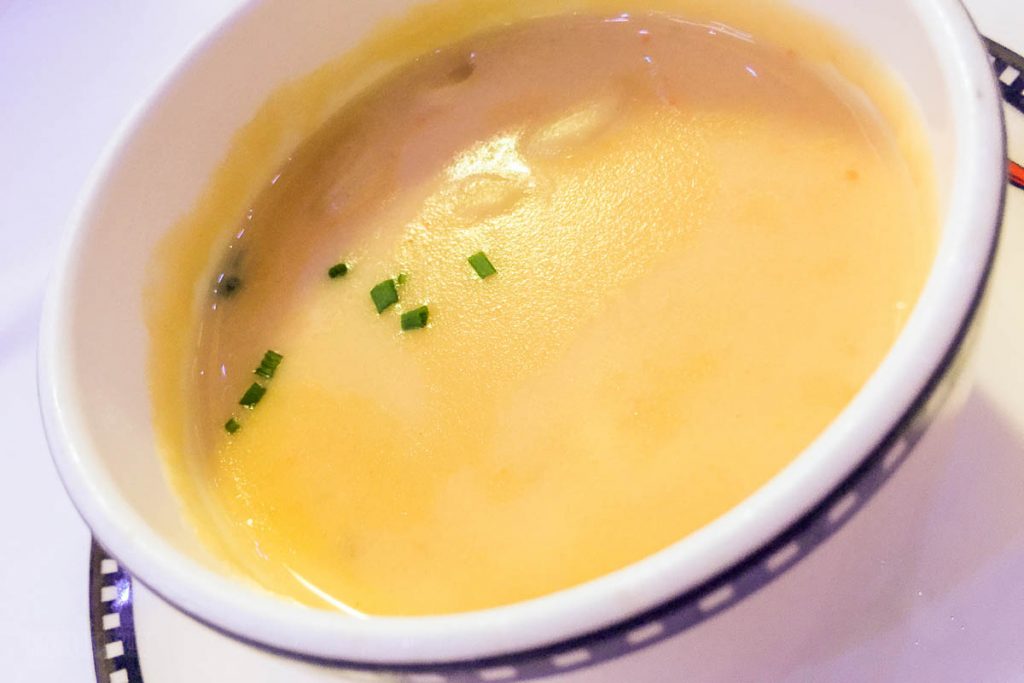 This was a barely acceptable replacement for the amazingly delicious and inventive buttered popcorn soup, but this was downright terrible. I’d love to write this on my comment card, but it will just reflect poorly on our serving team, not the kitchen. I am not even sure if you could call this cheese flavored it was soooooo mild and gritty. I mean, call Kraft and ask for barrels of the powered cheese; at least that fake cheese has flavor. I guess it was fine, but it did not leave a lasting impression. However, they must have dropped about 20 or so ingredients from the original recipe.

Tonight’s dinner was at Animator’s Palate with the always fun Animation Magic show. We got to try the new macaroni cheese and baked potato soup with a whopping 29 ingredients that replaced the buttered popcorn soup… Although, I enjoyed the hint of Tabasco Sauce, it did not win me over. I really missed the buttered popcorn soup which was themed much better to Animator’s Palate. – Trip Log from March 2014

Tonight, I couldn’t stomach a second spoonful and it sent me down the road less traveled. Now all I can think of is how the cruise fares are climbing and the bar of acceptability from the kitchen is dropping… It is interesting how it varies ship to ship also — same menus, different chef preparations. I realize food is subjective, so I’ll just stop here.

Emily had the lobster tail and Isabelle had the treasure of the seas pasta from the Pirate Night menu thanks to our server who put in a request since she missed the opportunity on Pirate Night when we were at Remy. It was a really nice gesture that he offered her during dinner the previous night. Isabelle is making up for all the shellfish I cannot eat, she loves that stuff! 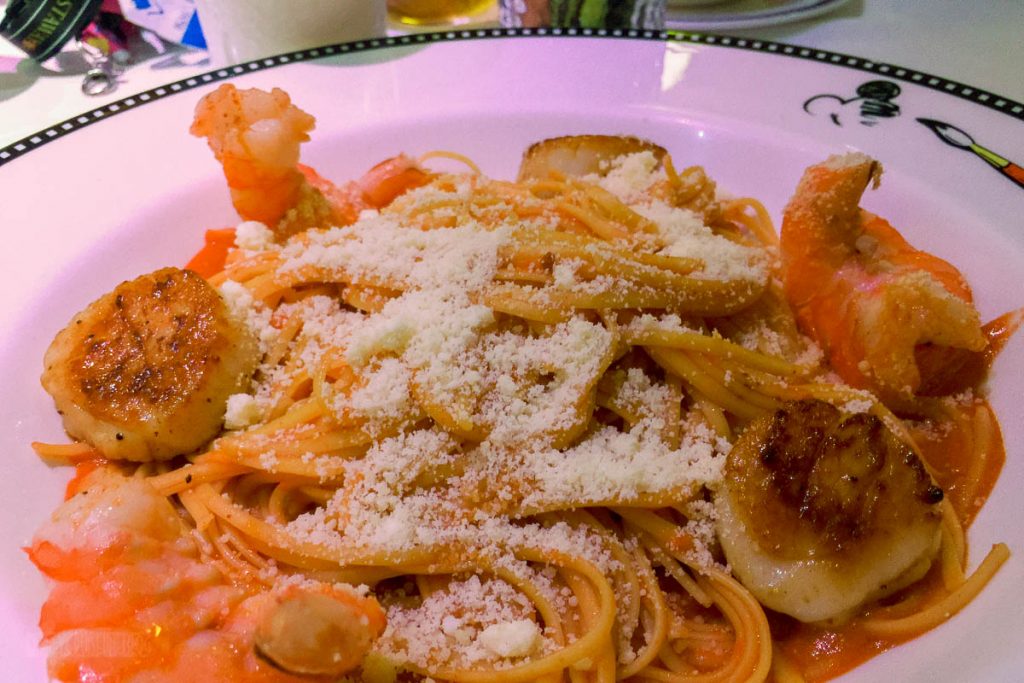 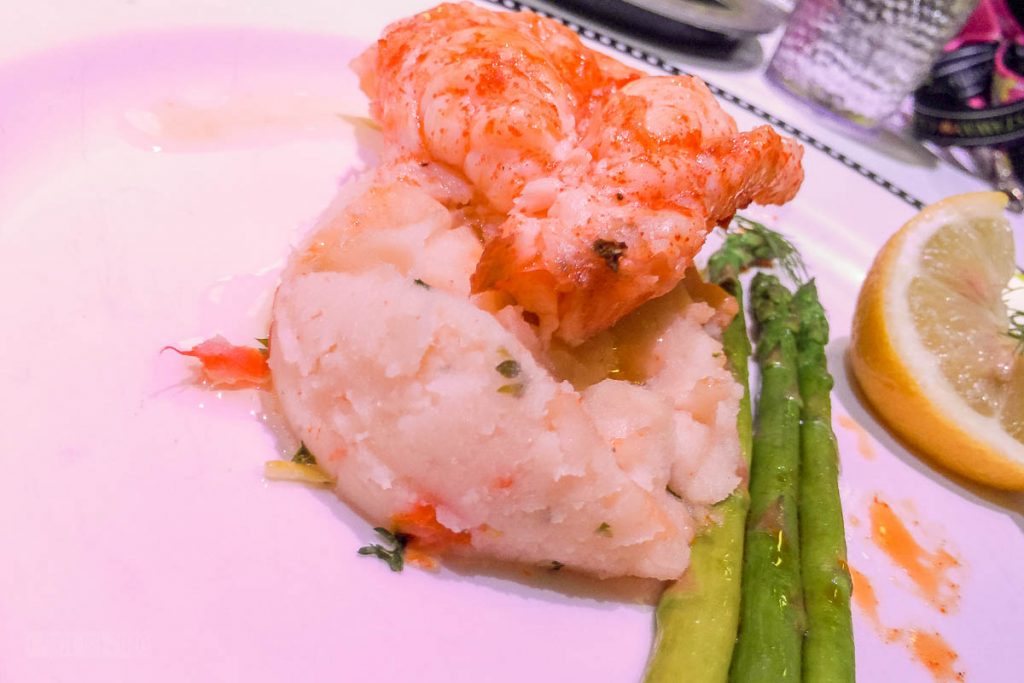 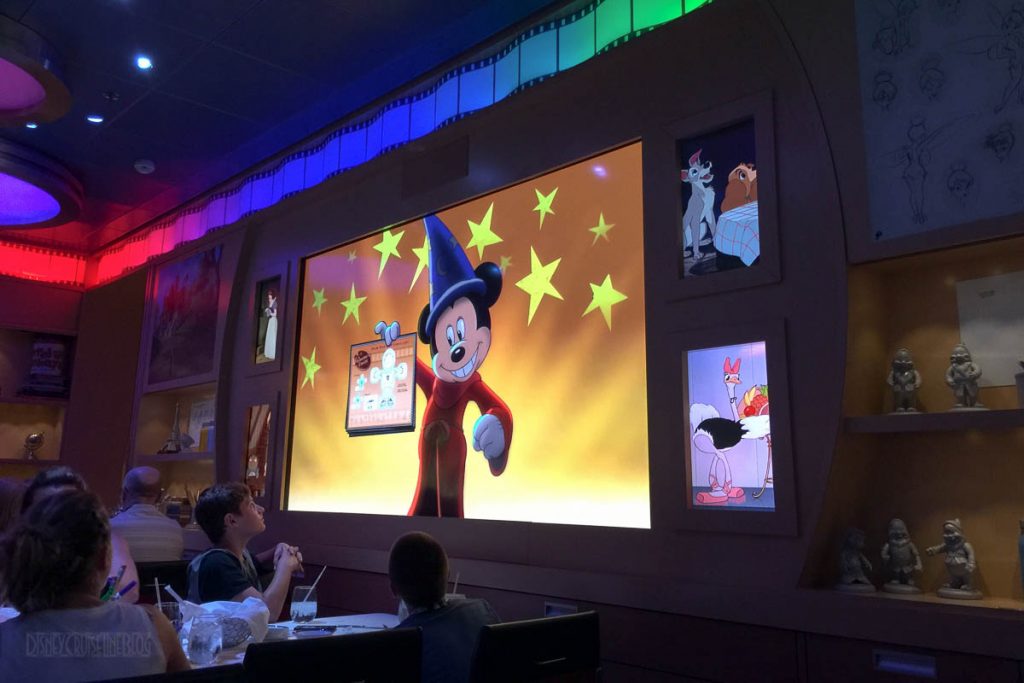 With the dinner show pacing we ordered our dessert at the beginning of the dinner so it could be delivered before the show starts. We all opted for the Warm Chocolate Lava Cake. 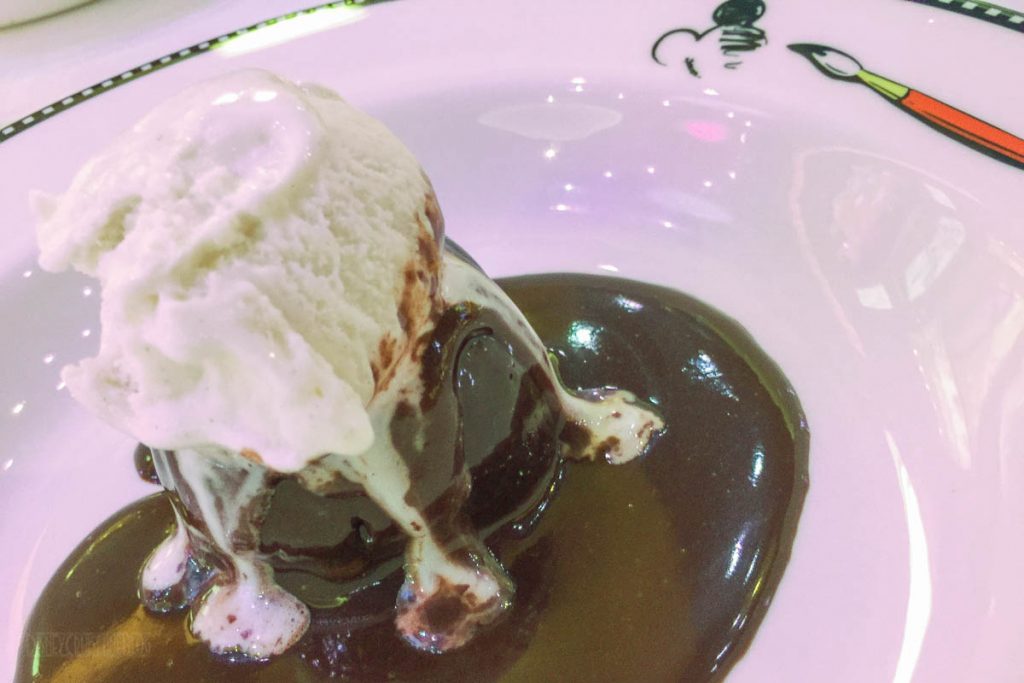 It is always fun to watch the show and see what others come up with for characters. 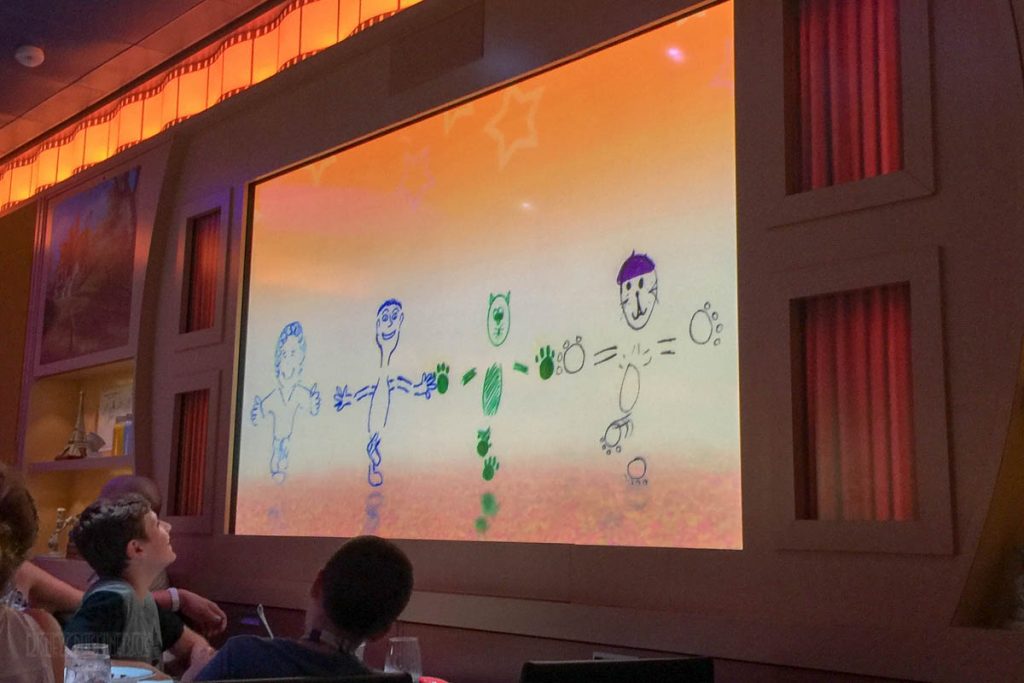 Tonight, there were some interesting ones and one that should have been excluded for an expressive hand gesture… As we were leaving, Isabelle read the ‘guidelines’ on the placemat, which says ’no pictures, words or symbols,’ and then asked why people can’t follow directions :/

We walked into Ooh La La, as we hadn’t made it there this cruise, and Emily noticed the ’Trio’ on the menu. This was her favorite in Pink on the Disney Dream in October, as it featured the Moet & Chandon Grand Vintage 2002 champagne which she really enjoyed. This is also a bar where you can get glasses of usually only sold-by-the-bottle champagnes. The bar server asked her if she wanted a glass of something to go, and then asked us if we were going to dinner at Palo or Remy. I answered that I was wearing a suit because it was semi-formal night & that we are part of a dying breed that actually still enjoys dressing up for dinner, our 9 year old included. 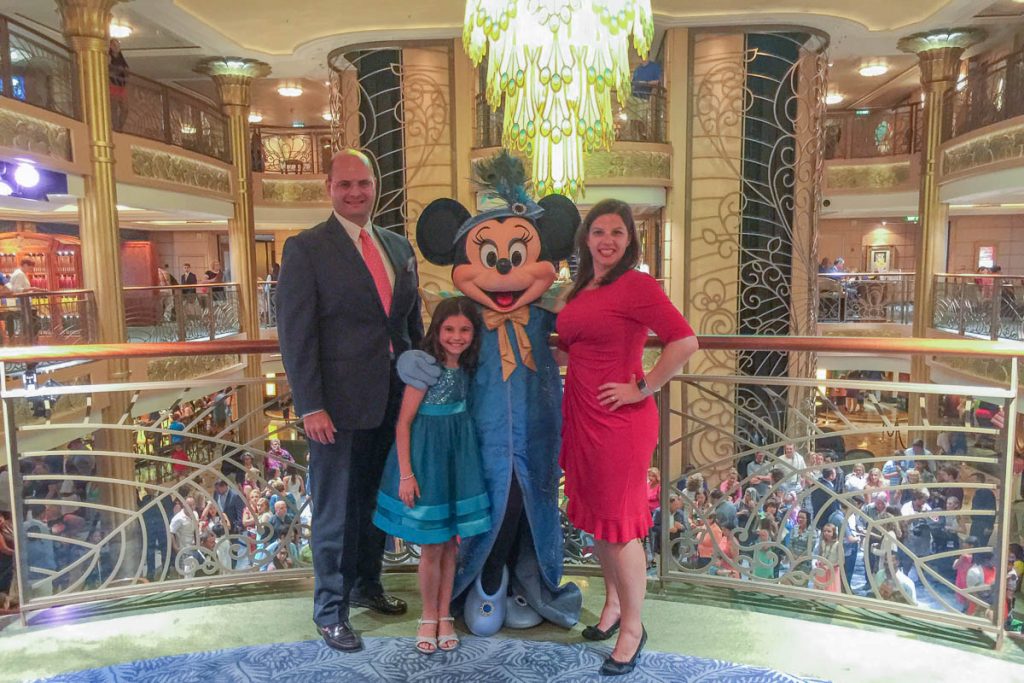 We walked towards the atrium to get in line for Flapper Minnie. We typically do not take character photos, but Isabelle loves Flapper Minnie. While we were waiting, I went into the Vista Gallery. Since the first night, I found it odd that half of the gallery was blocked off with a curtain. I figured they were moving artwork around and didn’t want anyone to see the work in progress or get in the way. However, after a few days the curtain was still there so I finally asked when the rest of the gallery would be back open only to find out it is no longer being used as a gallery. Minnie arrived and we were able to get a photo with her.

Great idea to move it to the atrium when the rotunda outside the shops and Walt Disney Theatre was relatively empty by comparison. Isabelle made the rounds through the pin books in the shops and finally ran out of pins she brought to trade.

We decided to call it a night and head to the room. Pete’s Dragon was now working so we watched the first half before she went to sleep. 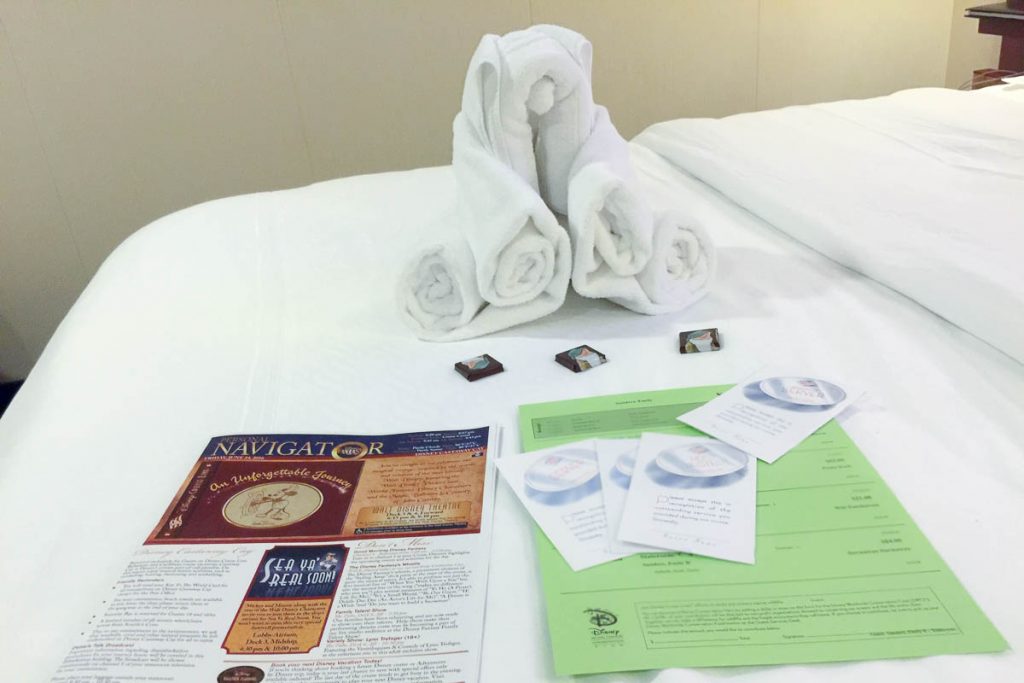