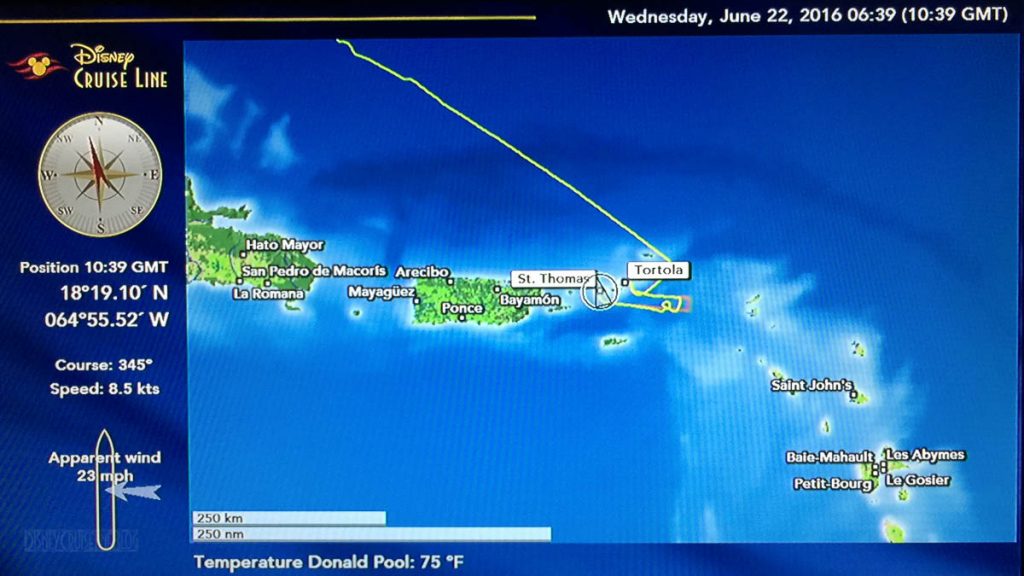 Wednesday was another day where I woke up before my regular weekday alarm clock. Since we didn’t have to sail very far to get from Tortola to St Thomas other than the deviation for pirate night fireworks, we were in the pole position as the first cruise ship to arrive at the Havensight pier. This meant we needed to be off the ship as soon as local authorities cleared the ship. Em went out at 5:30am and ran a 10k according to her Nike running app on the deck 4 track… However, it was really 4.5 miles – love how sailing messes with apps and GPS. She mentioned that she was alone on deck for her first mile, then was joined by one other person the entire time that she was up there. This was a nice option with the gym not being open until 6am and her wanting to be back and showered quicker. 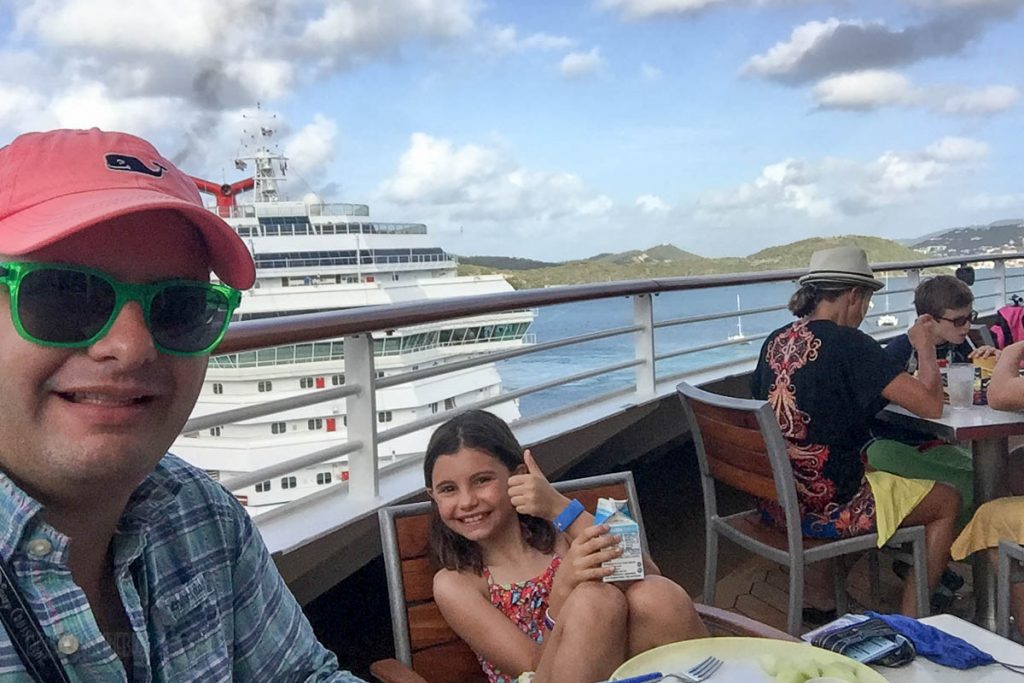 We had our day bags packed and headed up to Cabanas for breakfast. When we were finished, we decided to make our way down towards the gangway. We stopped at Guest Services and they told us that the ship had been cleared (although there hadn’t been an announcement yet), but were unsure as to whether the forward and/or midship gangways were open. We took a chance and lo and behold, the forward gangway was open and we were off the ship shortly after 7:50 am. Today required following a schedule, that schedule being the St Thomas – St John ferry schedule. Here is an older post that I’ll try to update once we get home on the various ways to get to St. John from the Havensight while on a cruise.

Right outside the cruise ship terminal are several taxis waiting for your business. We asked to go to Red Hook and within minutes, we were waiting on a taxi. We knew we needed to be on the 9am ferry, so there was actually plenty of time for the taxi driver to add other passengers to make his trip more cost effective. Sure enough, 5 more people boarded and we were off. 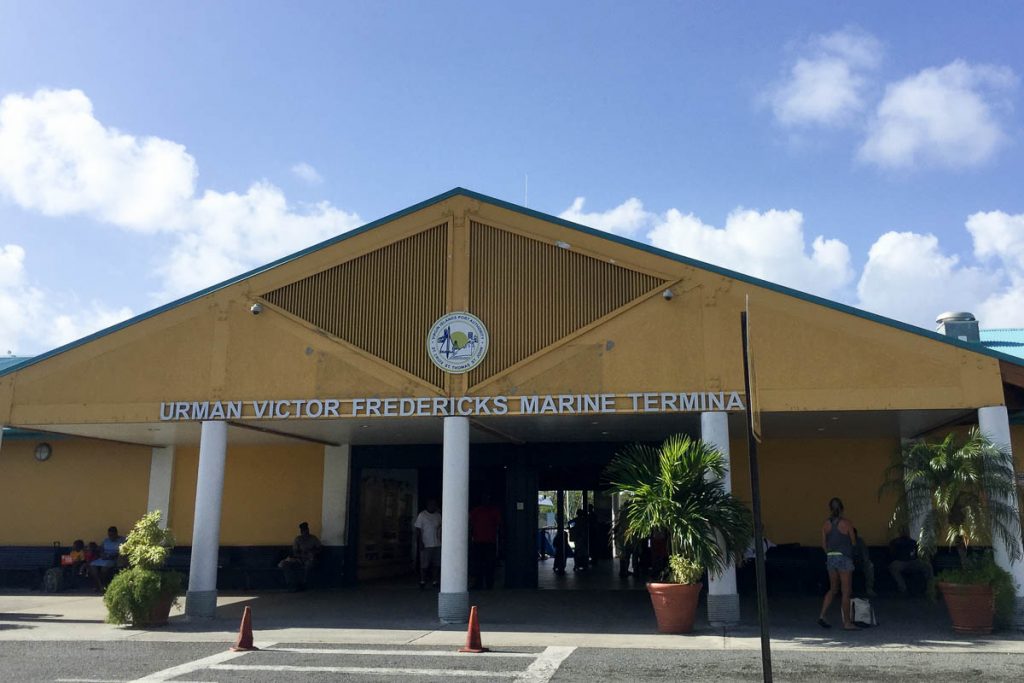 Our driver dropped the other passengers off at a grocery store near the Red Hook ferry docks, then dropped us off. We bought round trip tickets for the ferry, which is essentially just buying double tickets (this makes it easier upon your return in case you are pressed for time and there is a line). We boarded the 9am ferry and took the quick 15 minute trip to Cruz Bay, St. John USVI. One thing I like is that the ferrys are on time. The 9am ferry left at 9:02am. There isn’t any waiting around for stragglers.

Once we got to the dock, again, taxis await. Most people are going to the beaches, and so we specified that we wanted Cinnamon Bay. We were on a taxi with 8 other people, all who were going to Trunk Bay. Don’t get me wrong – Trunk Bay is beautiful and nice and easy snorkeling since there is an underwater trail; but since we have experience with most of the St. John beaches from our extended stay there, we chose Cinnamon Bay. Additionally, Trunk Bay is the place cruise ship excursions go and with multiple ships in port we knew it would get crowded. There isn’t an admission fee to enter Cinnamon Bay (yet), and there is a campsite, there are shower & restroom facilities, a shop to rent things like paddle boards, etc., as well as a gift shop & restaurant.

When we arrived to Cinnamon Bay beach, it was quiet, peaceful, and almost empty. It. Was. Lovely. THIS is why we don’t go to Trunk Bay.

We snorkeled for about 2 hours and encountered some great reefs with beautiful coral, sea fans, fish galore, and the sunken plane parts. I even saw a barracuda! We could’ve stayed longer (and have in the past), but on this trip, there were places in Cruz Bay we wanted to go to, so we wanted to be back downtown around Noon.

We got cleaned up and began walking towards the parking lot and noticed an empty taxi. Emily walked over to the patio area of the restaurant and the taxi driver was there, so she asked if he’d take us to town. He happily obliged and once we boarded, there was a family of 4 who also joined our ride.

Mongoose Junction came up quick and we were let off near the entrance. We walked the short walk to the St. John Brewers Tap Room. 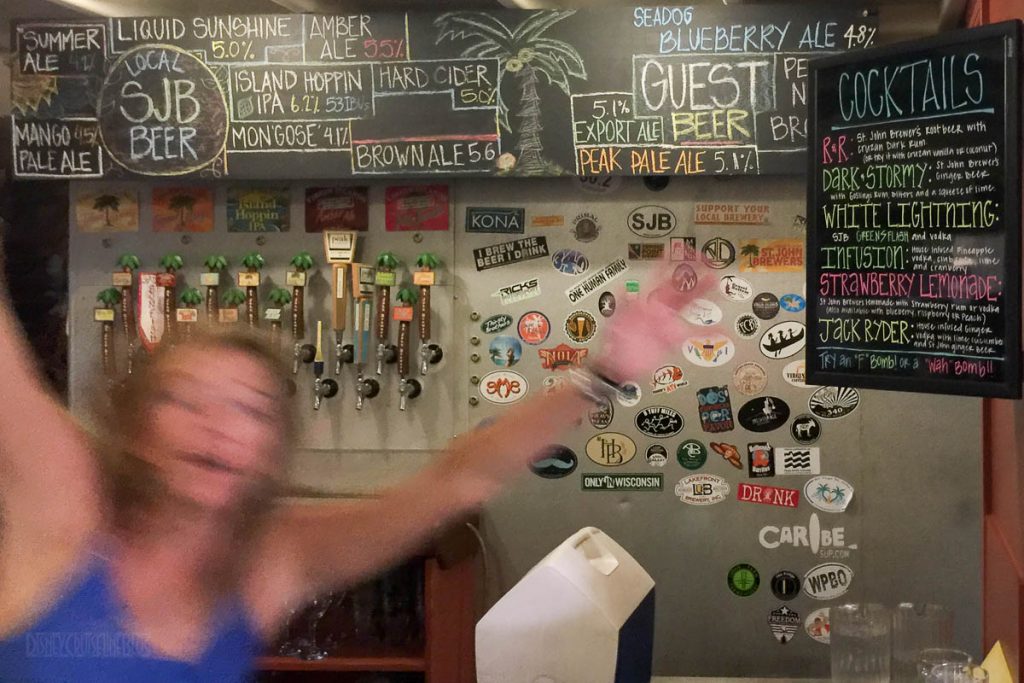 The Tap Room has a good menu and a great selection of beer and even their own brewed ginger & root beers. Isabelle loved the root beer, the Dark & Stormy that Emily ordered was delicious and the Island Hoppin IPA was refreshing after a morning of snorkeling. 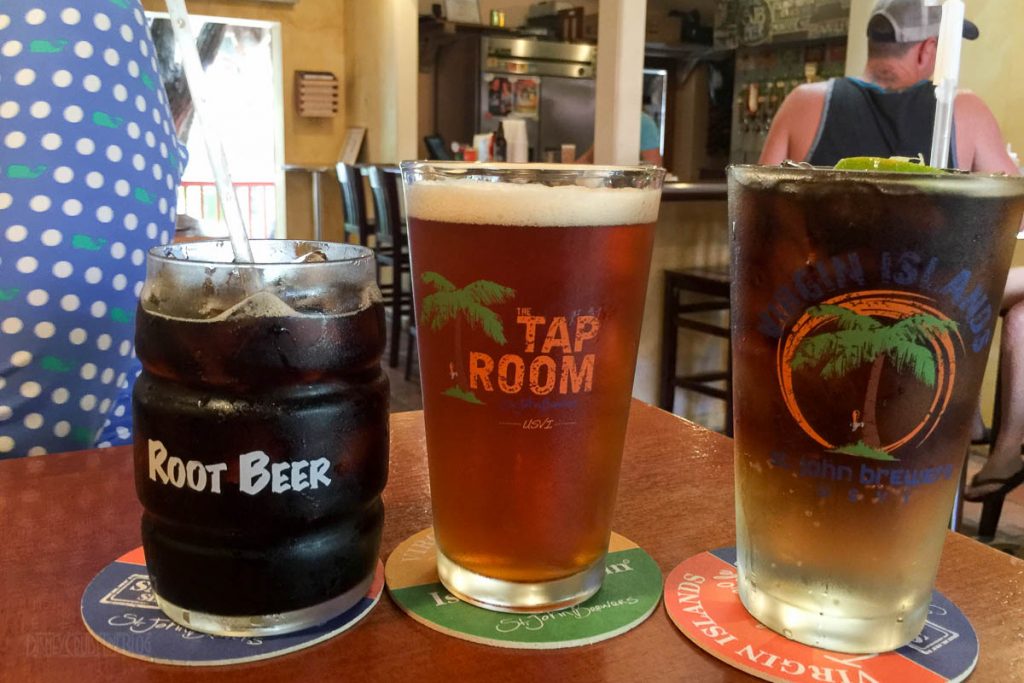 I went with the lunch special, a grilled buffalo chicken sandwich with cole slaw. Emily had fish tacos and Isabelle went with a Mexican pizza. 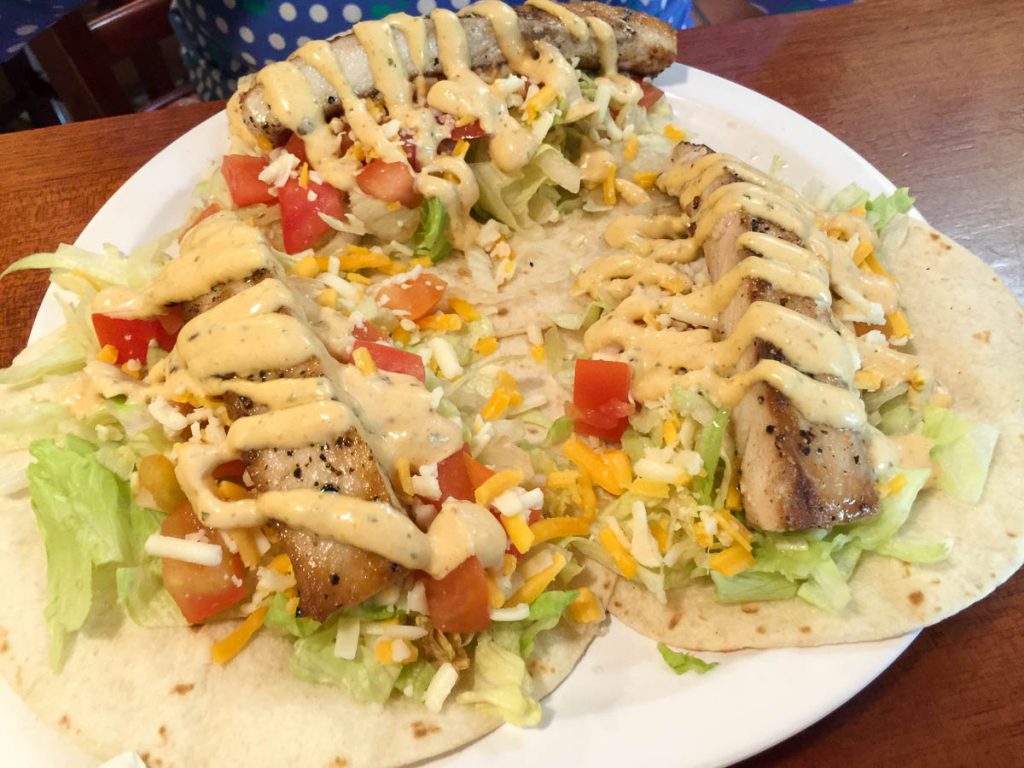 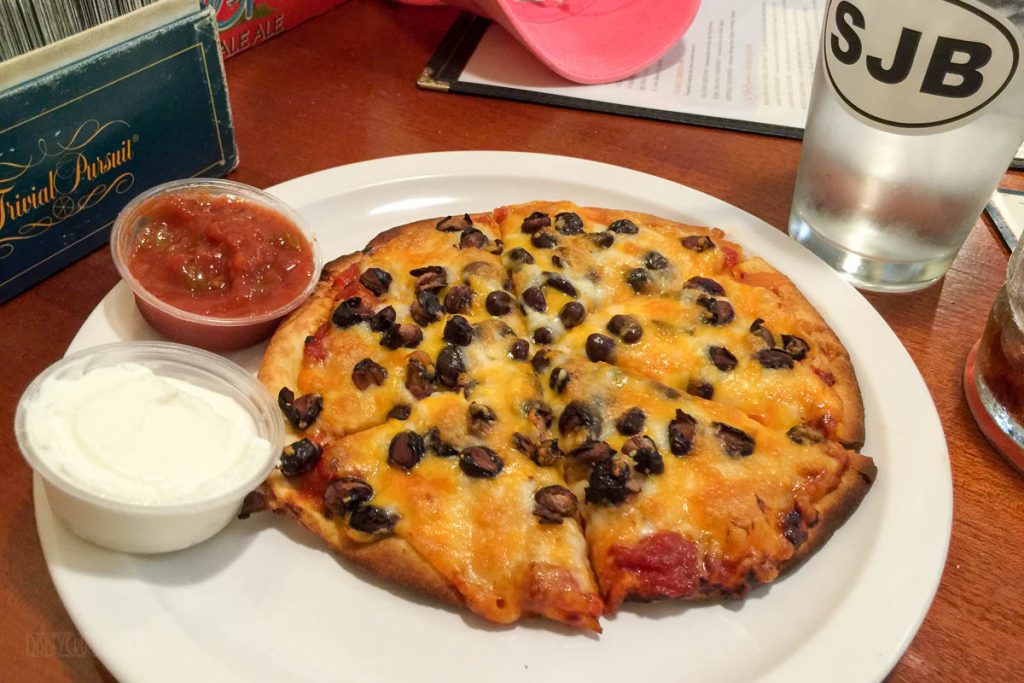 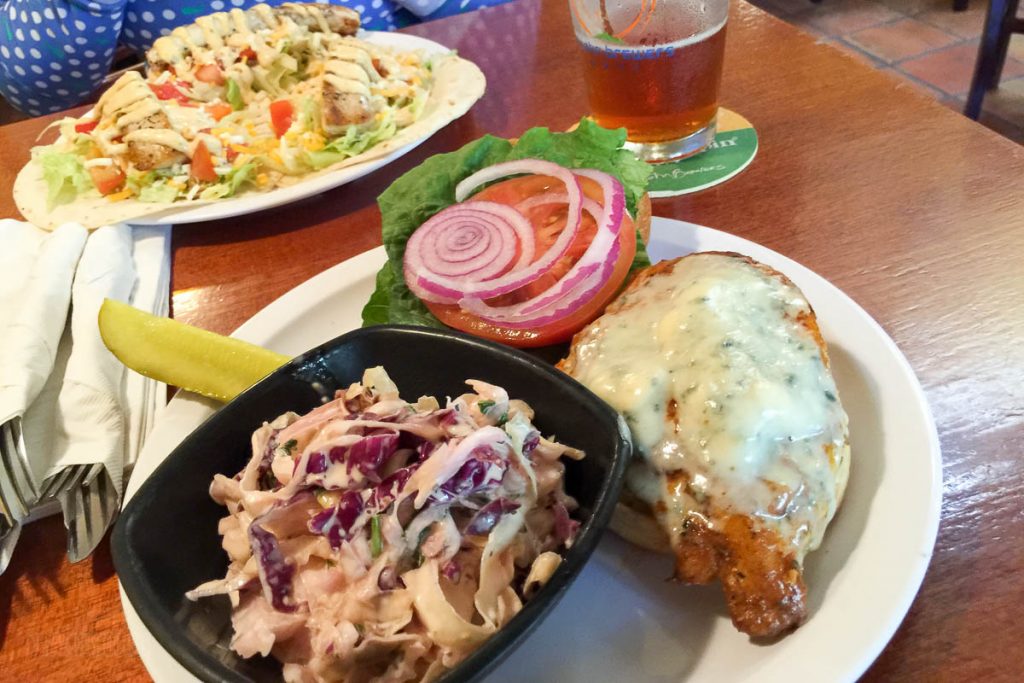 They are awesome about local everything where they can – Emily asked for hot sauce and was brought two different hot sauces both made in Coral Bay, St. John. This is not our first time eating at St John Brewers, but it was the first time in their temporary location as they rebuild from a January 2015 fire. 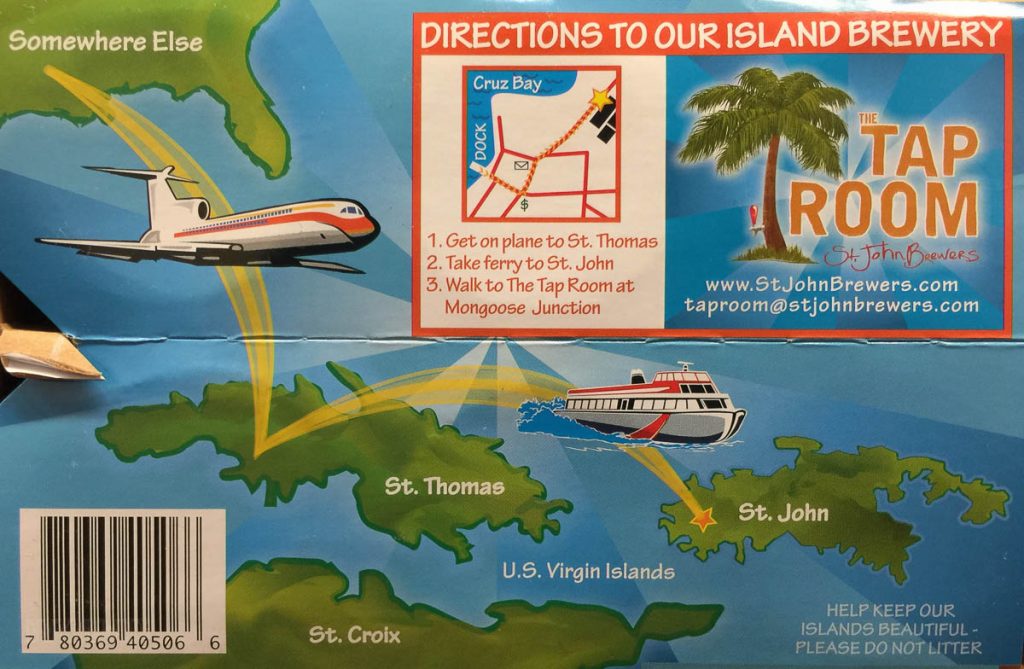 As a bonus, they sell beer to go either in a plastic cup or in bottles/cans. I walked out with a Mango Pale Ale. 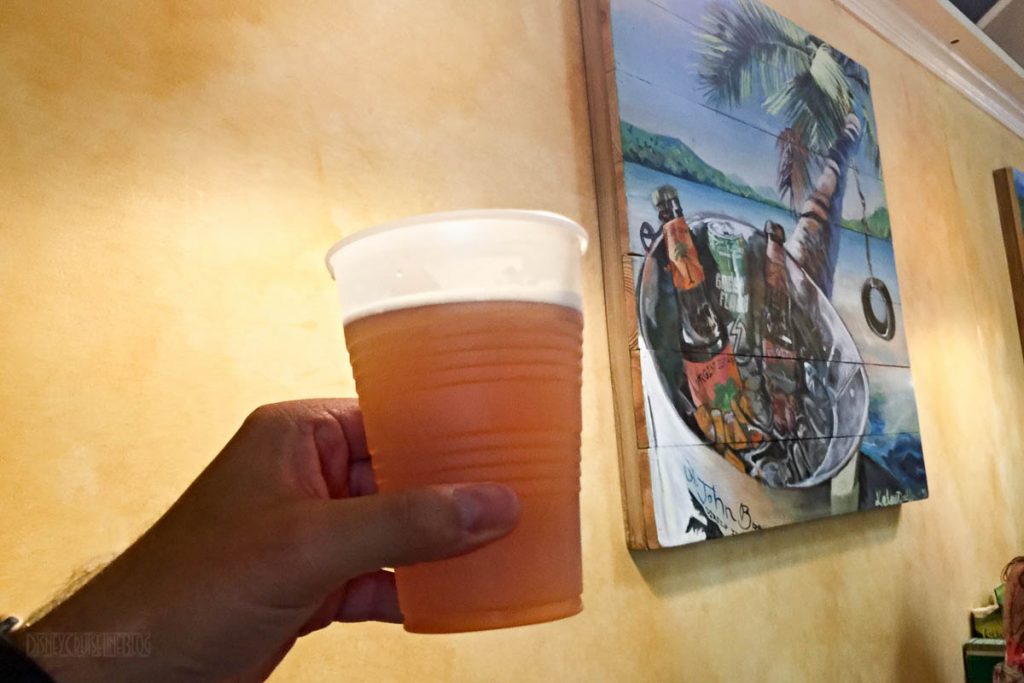 We walked around to a couple of shops, then we headed to our next stop, Scoops, an ice cream shop. Scoops is fabulous. Their ice cream is incredible – handmade, a variety of flavors that rotate, and adult flavors made with alcohol. We went several times when we stayed on St. John and tried several flavors. Emily was a bit sad to see her favorite, the champagne sorbet (made with champagne!) was not a choice today, but ordered ‘Painkiller,’ which she said was ‘magical.’ They offer homemade waffle cones, smoothies, and even shots of liquor to put on your ice cream. This is super easy to get to if you are visiting the Cruz Bay area, so I would definitely recommend a stop here. We finally filled up our punch card so our next one is free, pending they still honor the card when we return. 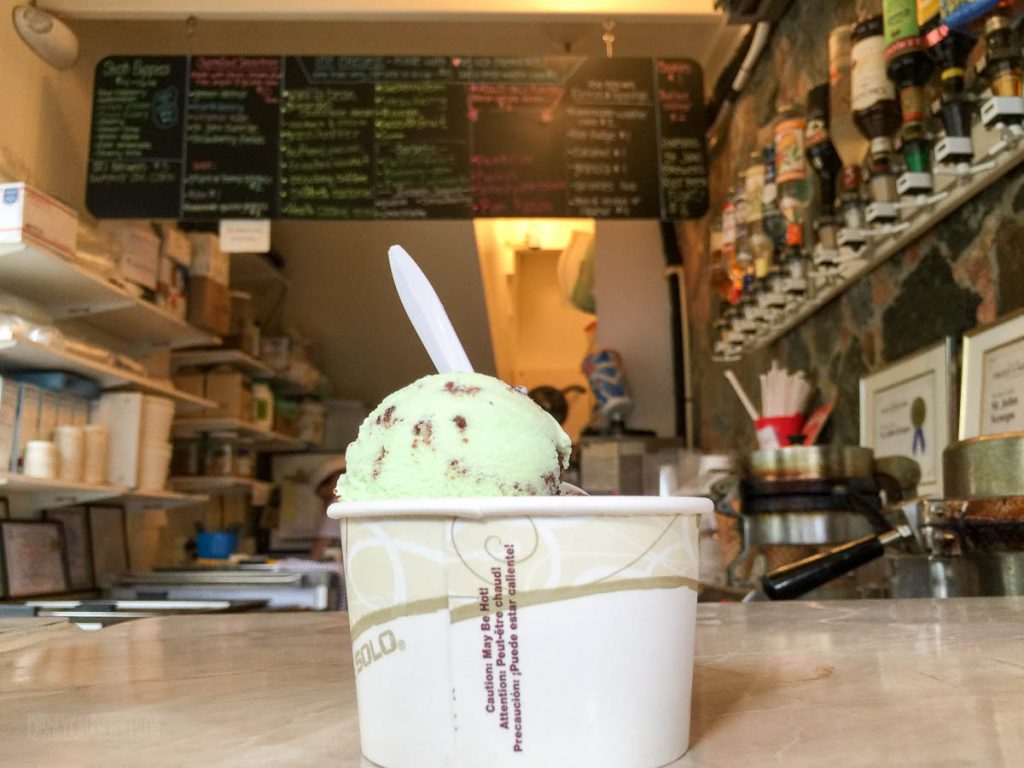 Our last stop was St John Spice which operates one of the webcams we have linked on the website. This is a great place to get some loose tea, coffee and spices. Emily loves their tropical tea flavors and makes iced tea with them at home. 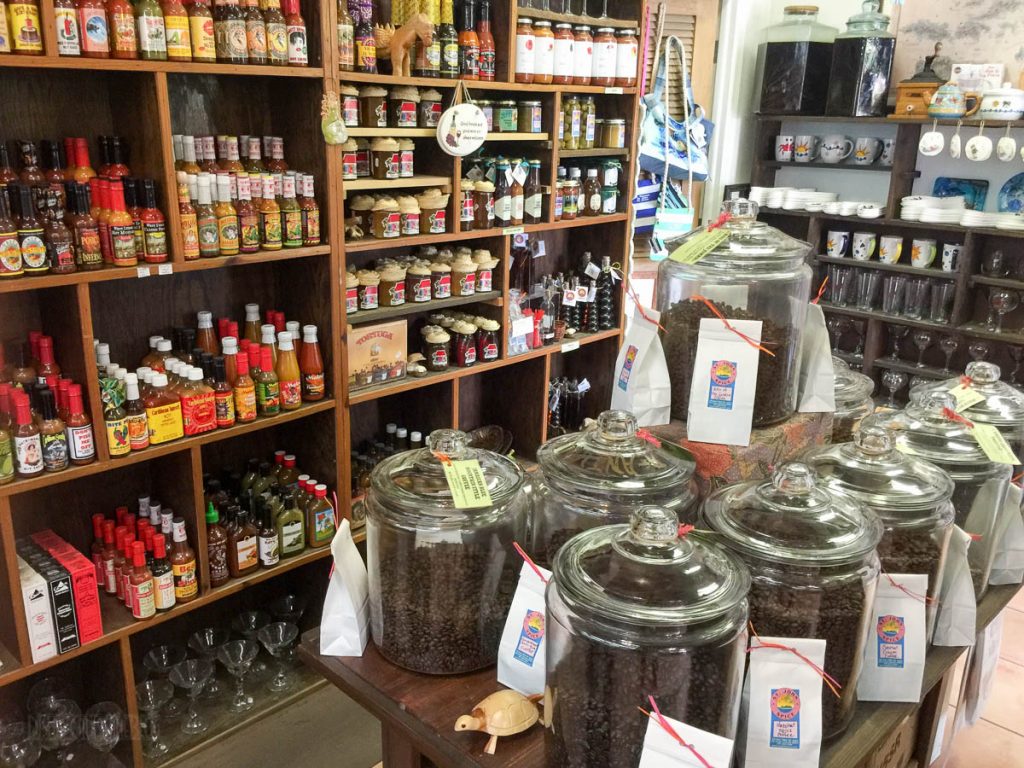 They also have other goodies – typical souvenirs including t-shirts, beautiful Christmas ornaments, as well as hand painted wine glasses, coffee mugs, and so on. St. John Spice is just across the street from the ferry dock. 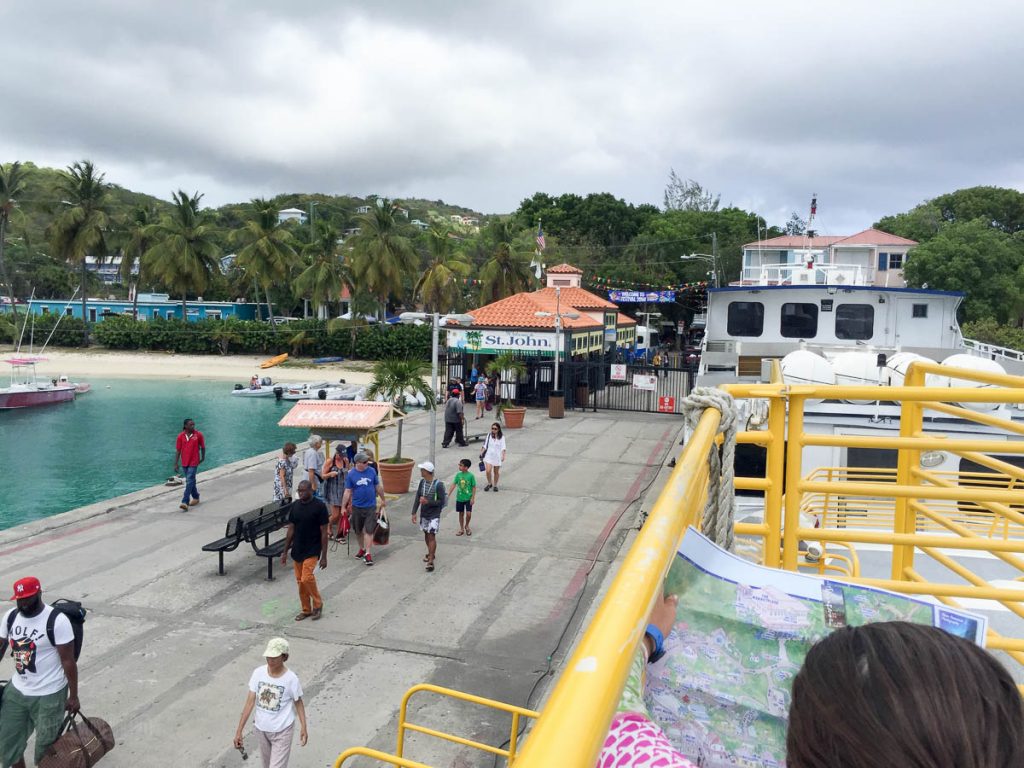 As much as we would love to be on island time, the fact is the ferry back to St. Thomas was in 15 minutes, so we completed our purchase and made our way to the pier. Like clockwork, the ferry left St. John about 2:02. For anyone interested, I Periscoped the trip back.

We arrived back to St Thomas in about 15 minutes and quickly boarded a taxi with another family headed back to the Disney Fantasy as well as a couple going to a hotel along the way. 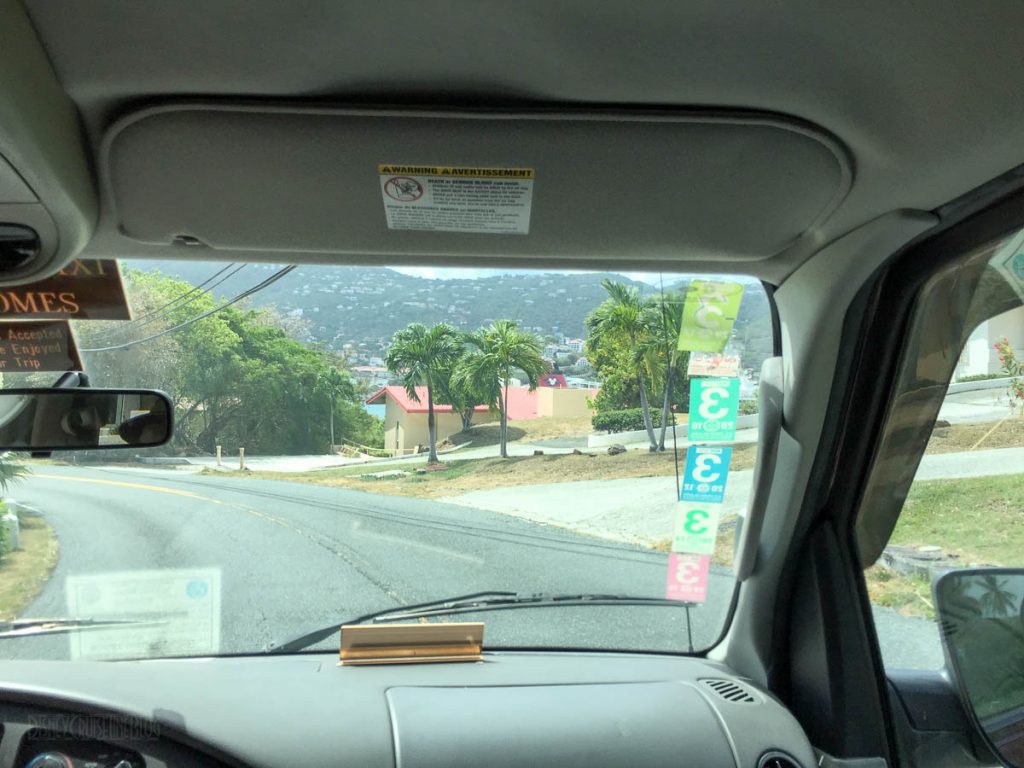 Thankfully, traffic was light and we made it back with plenty of time to spare. I’m sure DCL shoreside hoped I’d get lost in St John and my family would return without me…. 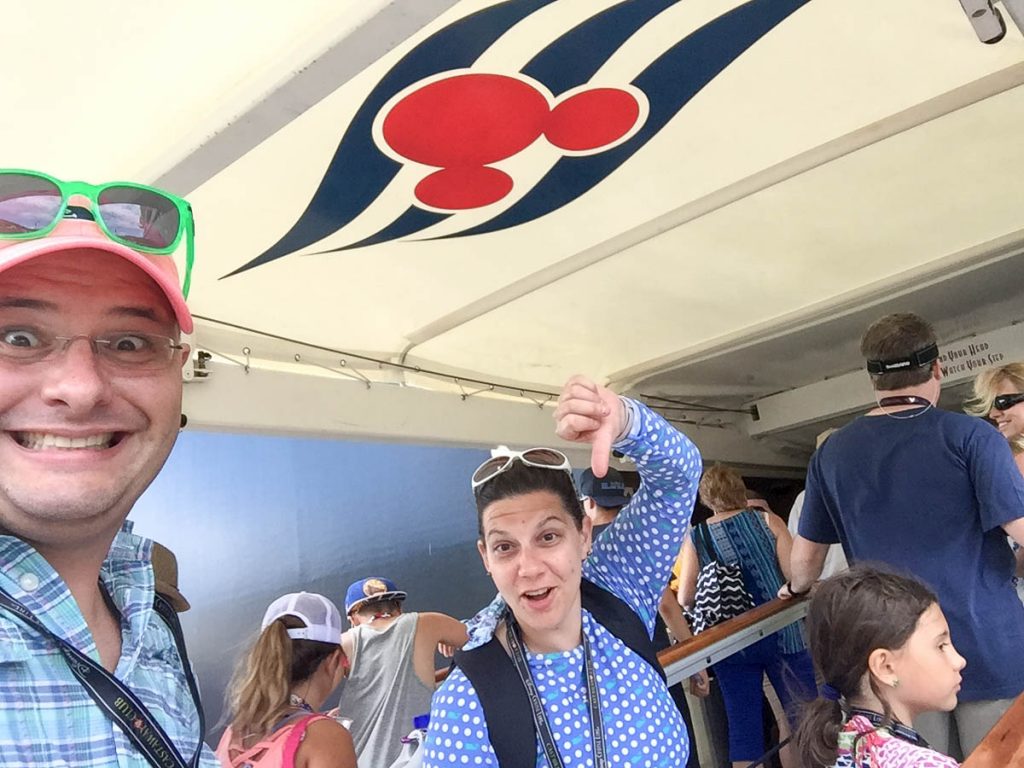 Time checked back onto the ship – 2:53pm. All aboard time was 4pm, so still an hour to spare. We would’ve still had time to walk around the Havensight pier shops if desired. Of note, one of the nice things that DCL provides is water and flavored fruit water before you board the ship – Emily was enjoying the watermelon-pineapple flavor. It’s just ice water with a few slices of fruit in it just for a subtle flavor, but another nice DCL touch.

It was a little bit past 3 o’clock when we arrived at our stateroom. After two days ashore doing water related activities we skipped going up to the pool. Instead, we just cleaned up and did a couple loads of laundry and watched the first half of Bedknobs and Broomsticks.

Tonight’s dinner was the Prince and Princess menu and we were back in Royal Court. Emily and I both started with the Coronation of Mixed Leaves. This is one of my favorite salads onboard, I really like how the blue cheese, candied walnuts and apples interact. This is definitely a salad to mix up a bit and get a little of everything in each bite. 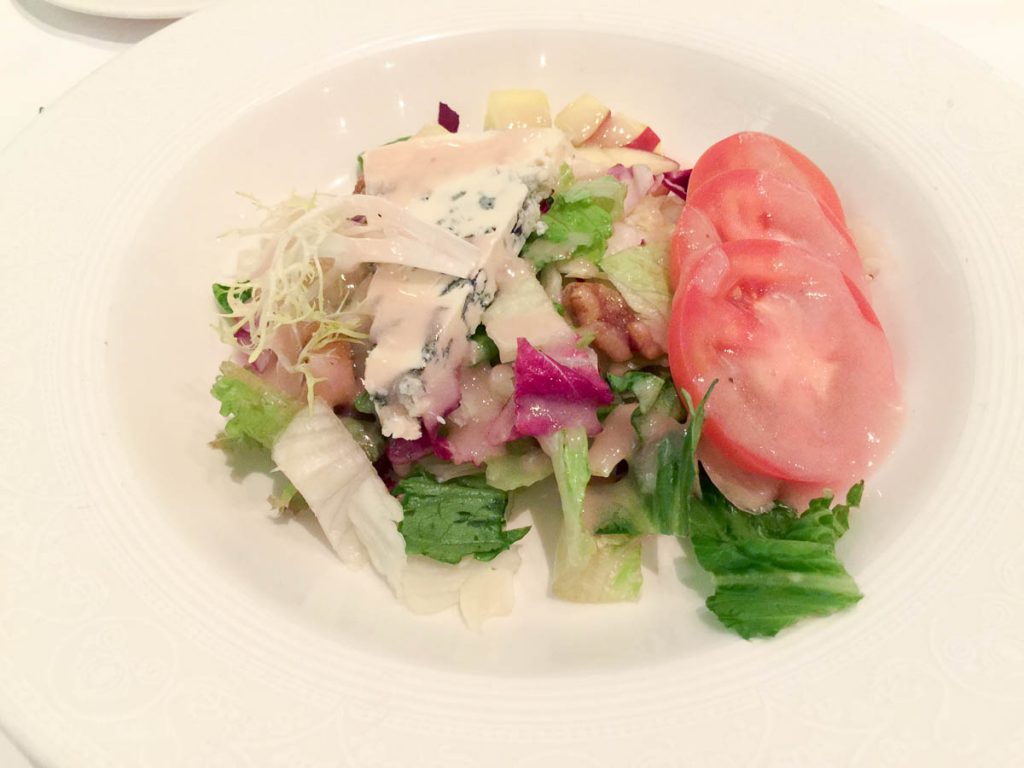 For our main course, I went with Oven-Roasted Tom Turkey Breast or as I call it, the Thanksgiving entree. Considering retailers find a way to offer Christmas in July sales, there really needs to be push to get Thanksgiving in June… 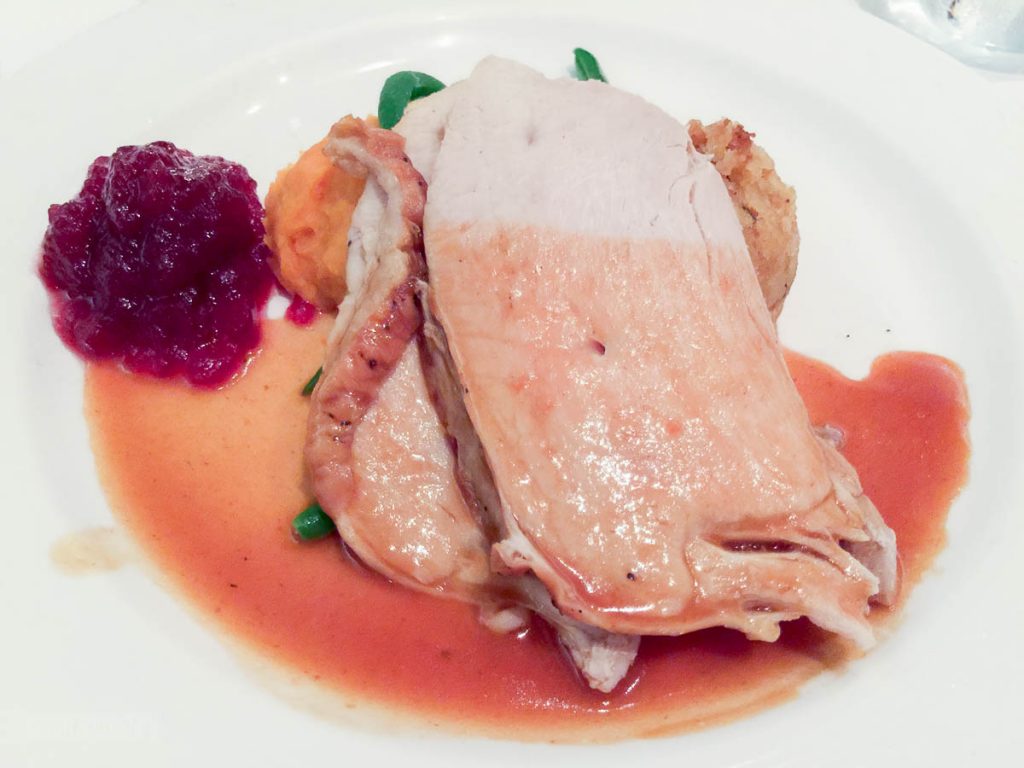 The menu stated the stuffing had rosemary, but I couldn’t taste it. In fact, whatever it was was incredible and I’d love to find the recipe – it was very flavorful. I suspect it was cornbread and with some apples and some other good stuff…maybe raisins? I should have asked. If you know or have the recipe, let me know.

Emily ordered Prince Charming’s Portobello Triangoli and Isabelle went with the Grilled Filet of Turbot. Not sure if was all the snorkeling or what, but the fish quickly disappeared off of Isabelle’s plate 🙂 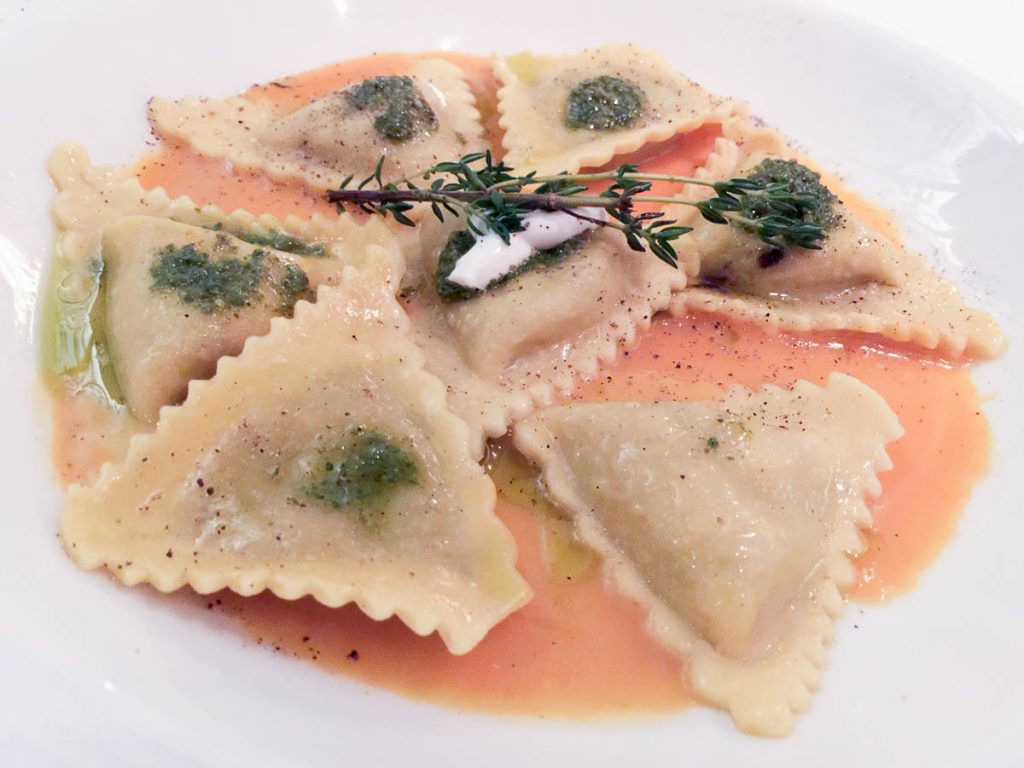 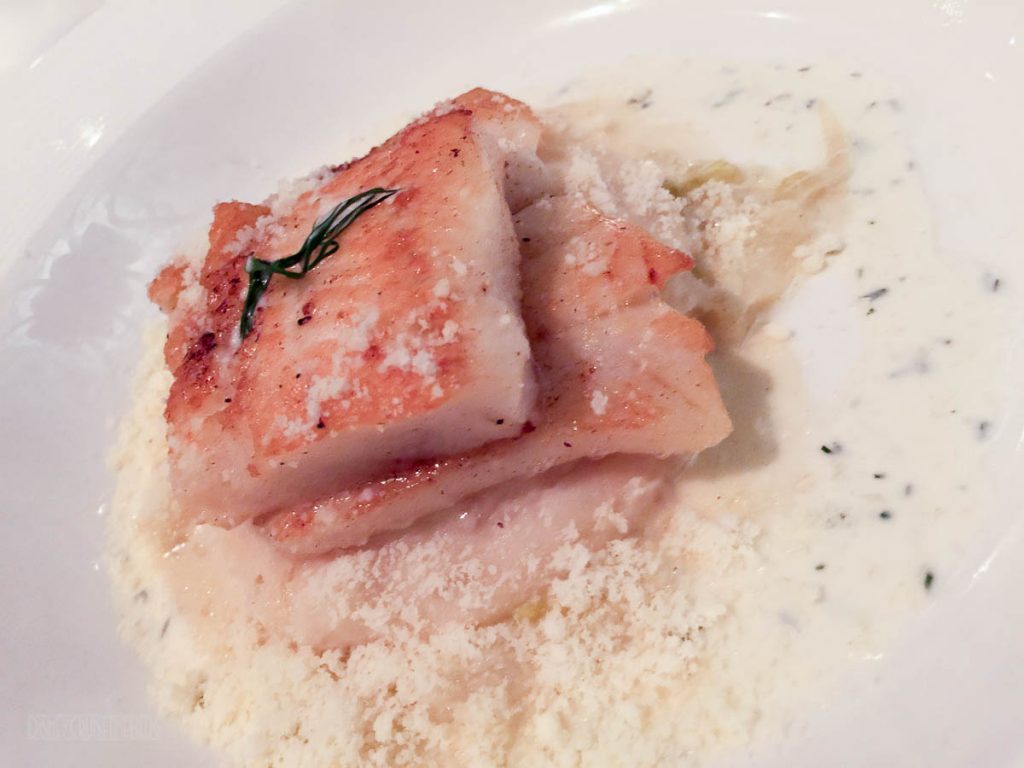 The highlight of the dessert menu was Princess Jasmine’ Banana Bread Pudding. Emily ordered the tiramisu and Isabelle had a  few bites of a chocolate brownie. 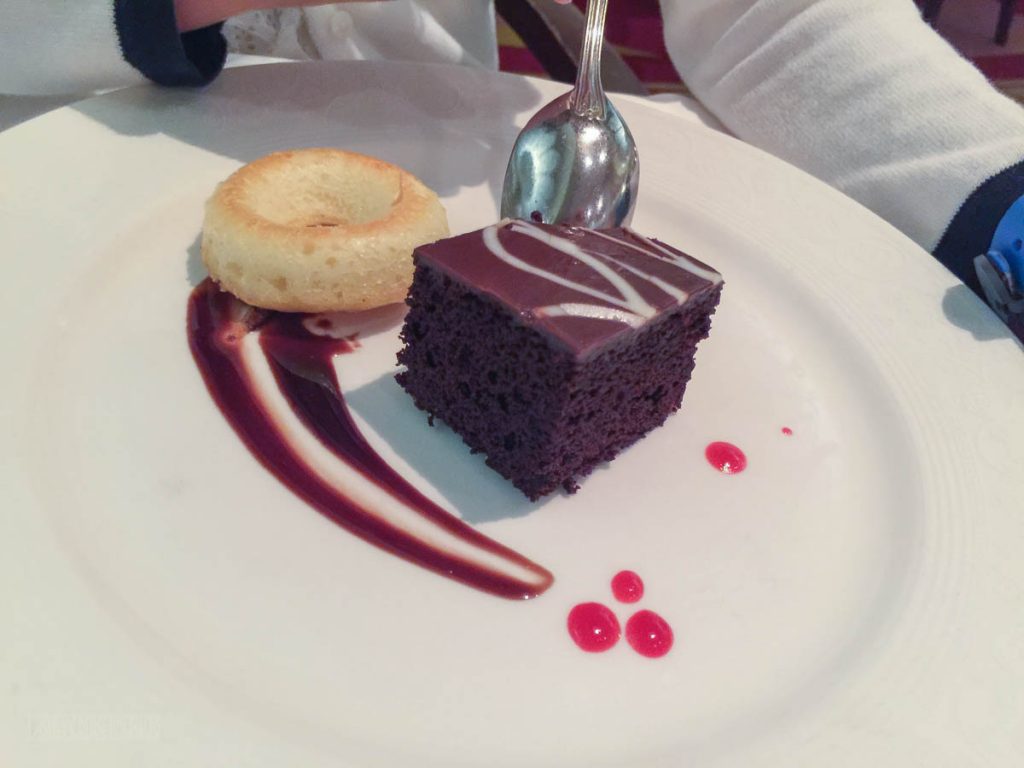 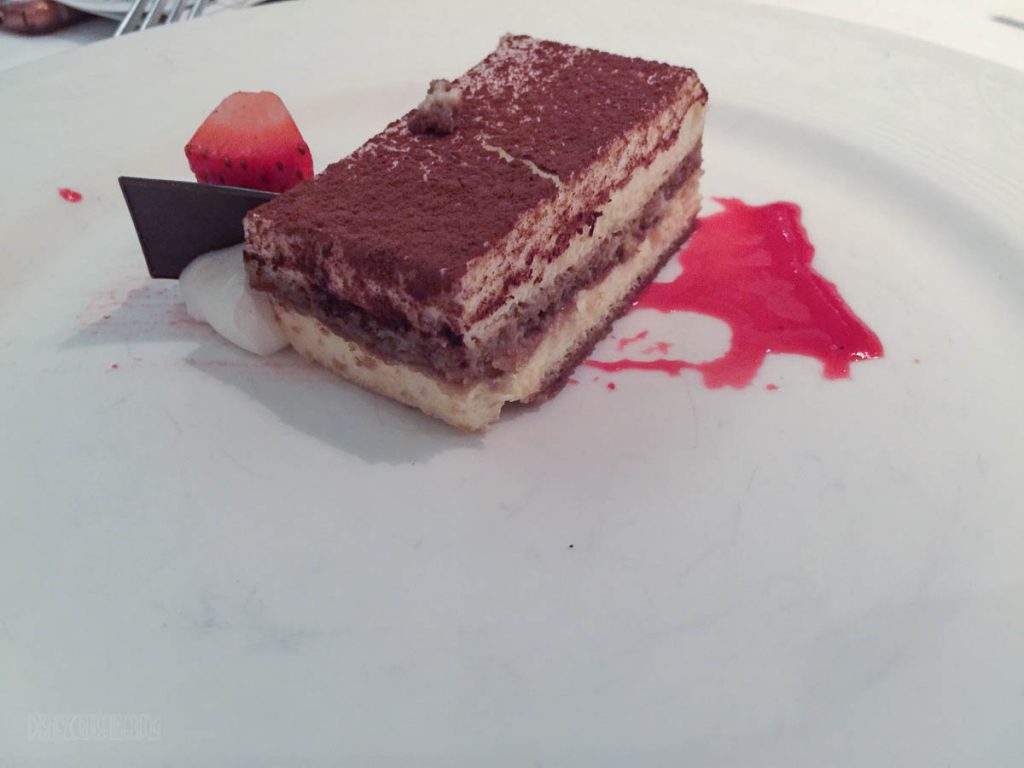 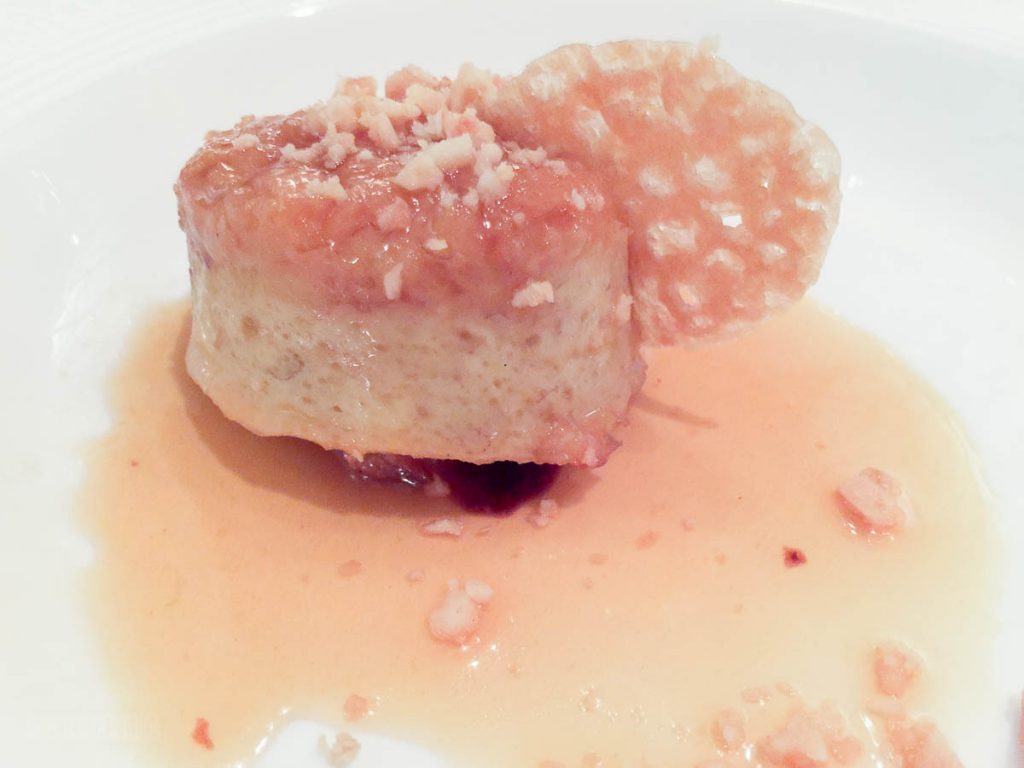 After dinner, I had a chat with the Connect @ Sea rep to figure out what was going on with the DCL Navigator App chat. We were testing the chat between my iPhone and Emily’s. 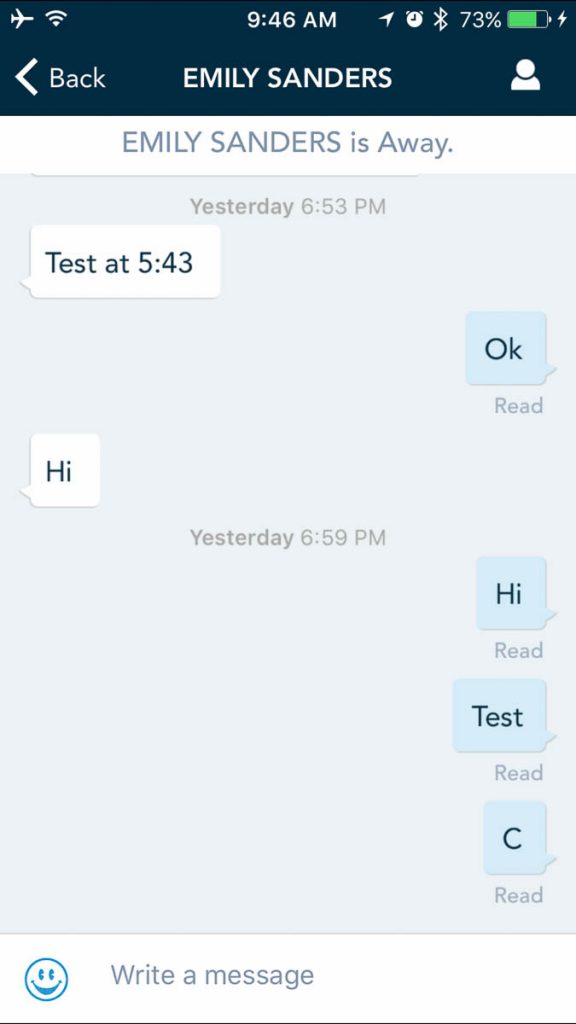 I’ve turned off my background app refresh, iCloud stuff, automatic updates/downloads of stuff to prevent any extra data usage when using my data plan. In contrast, Emily’s phone is untouched because she is not logging into use the internet. We ruled out any settings issues then discovered the chat is only working when the app is open. We are going to try and test this out over the next two days to see if this is indeed a workable solution. I really appreciated the time he took to investigate this further and I hope it is something the developers can resolve. I’d really like to be able to trust the chat the feature in the future because texting with a Wave Phone is nearly impossible for me, plus we never have them with us.

We still had some time before the evening show, so we split time between the lounge chairs on deck 4 and the shops. So far, we’ve struck out in the shops unless you count our duty free purchases. 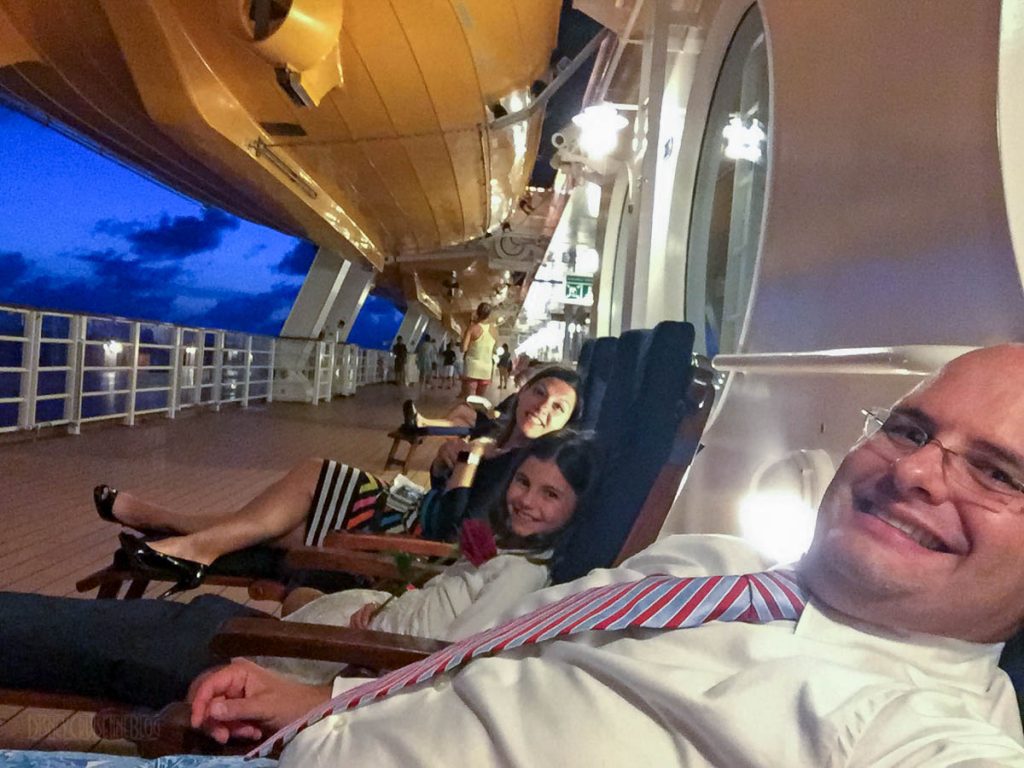 Around 8ish, we found seats in the Walt Disney Theatre for the John Cassidy show. Isabelle wanted to sit in the front row with hopes of being chosen to go up on stage. Emily ordered the drink of the day, the Mai Tai. 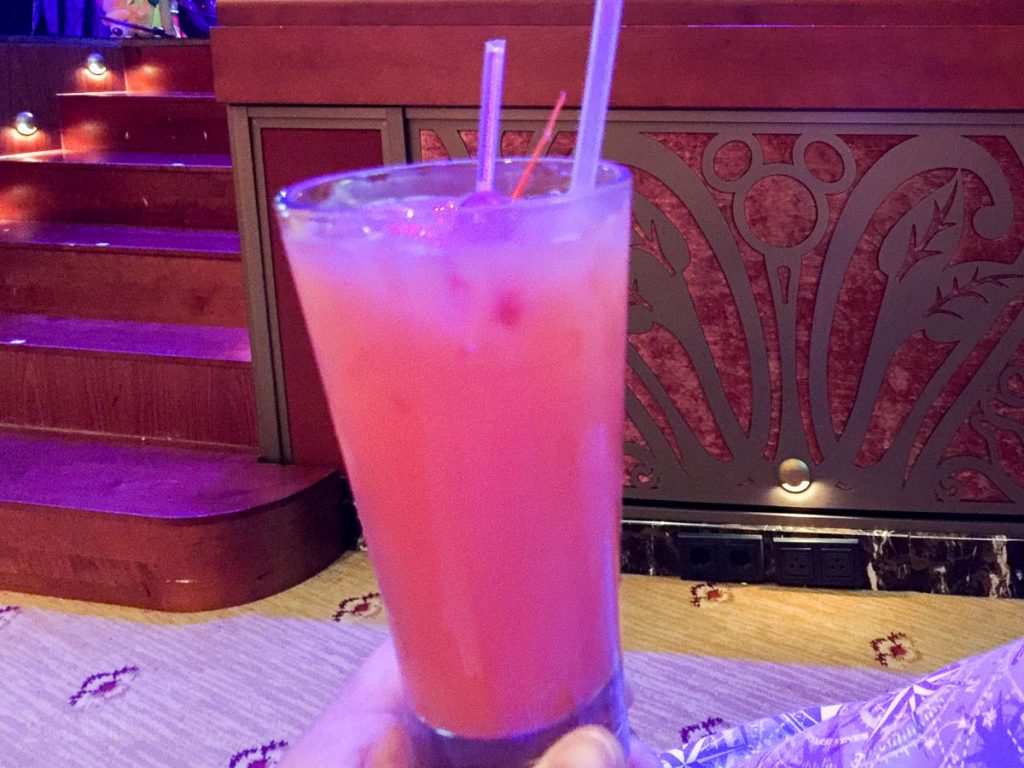 John’s show is really dependent on the audience as he picks a few kids to join him on stage throughout the show. His ability to go with the flow based on how the kids react is impressive. 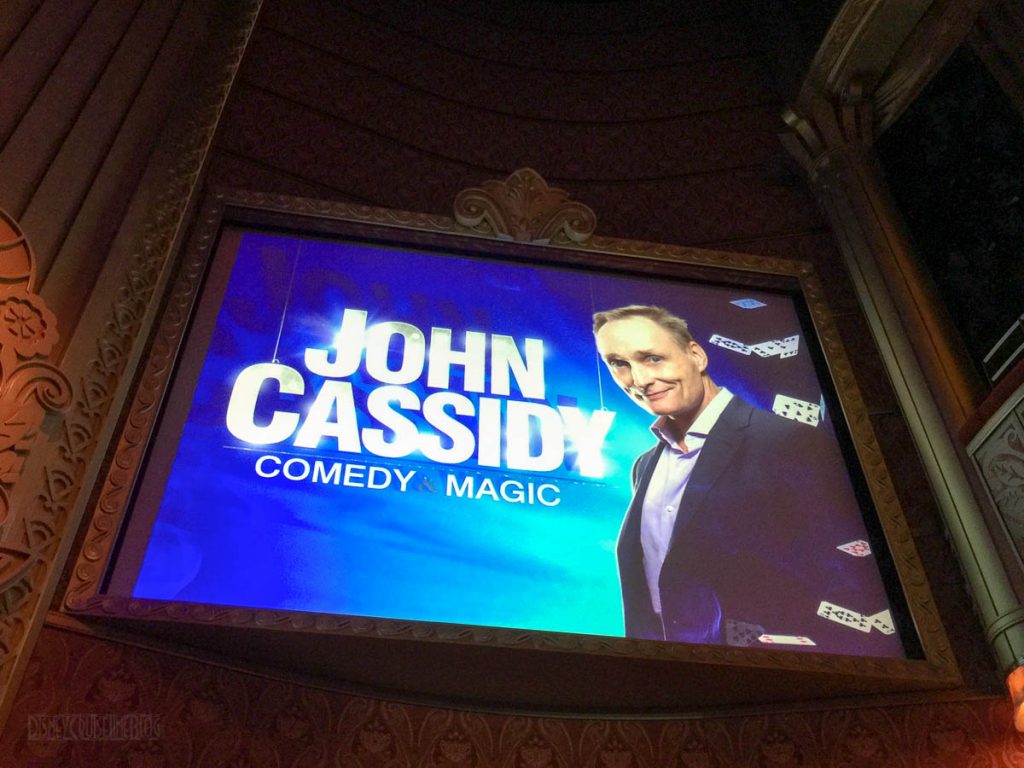 If you are familiar with his show in the past, especially the smaller venue shows in the afternoons, the kids would leave with some incredible balloon animals, but unfortunately this is no longer the case in order help protect the environment and to not hurt the feelings of the kids that didn’t get any.

After the show it was time for bed to rest up for a relaxing day at sea!