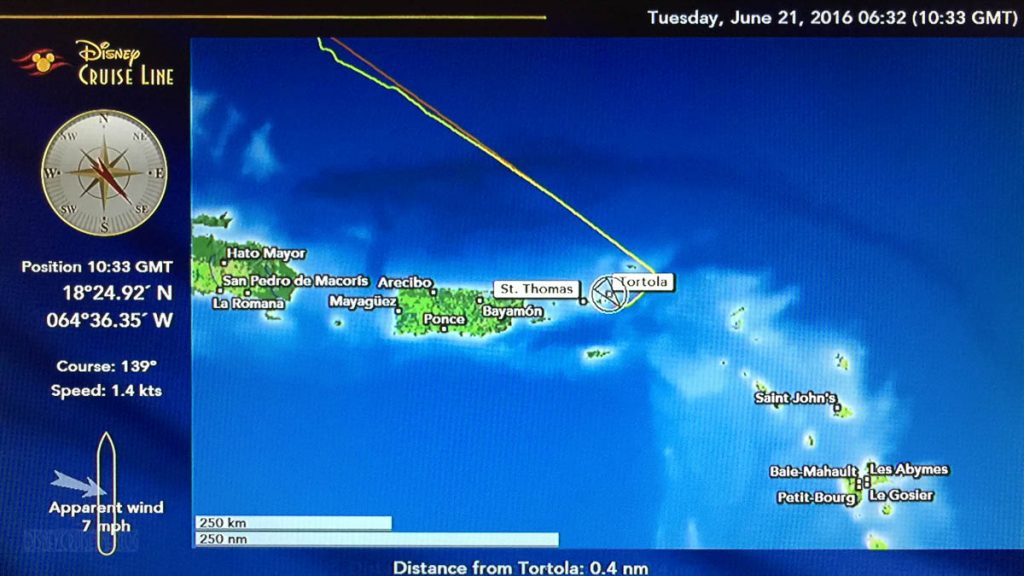 Up bright and early to start our first day ashore. Today, we are in Tortola, British Virgin Islands. This is our first Eastern Caribbean cruise since Disney added Tortola to the itinerary so we were looking forward to the new port. Emily continued her morning routine of rope dropping the gym.

Isabelle and I rope dropped Cabanas which opened at 6:45 AM and Emily joined us when she finished at the gym. There continues to be an inability to communicate with one another via the DCL Navigator App chat. I’m guess this is partially due to having background services turned off on my iPhone to limit data usage when signed into my data plan. However, Emily sent me a message before 6:00 AM and I still do not have it as I am writing this sentence at 4:22 PM. I take that back – at 4:23 after quitting the app and toggling in and out of my chat session, the messages arrived. Regardless, the chat feature is not something we can recommend for important conversations. Stick to fact to face or the Wave phones. 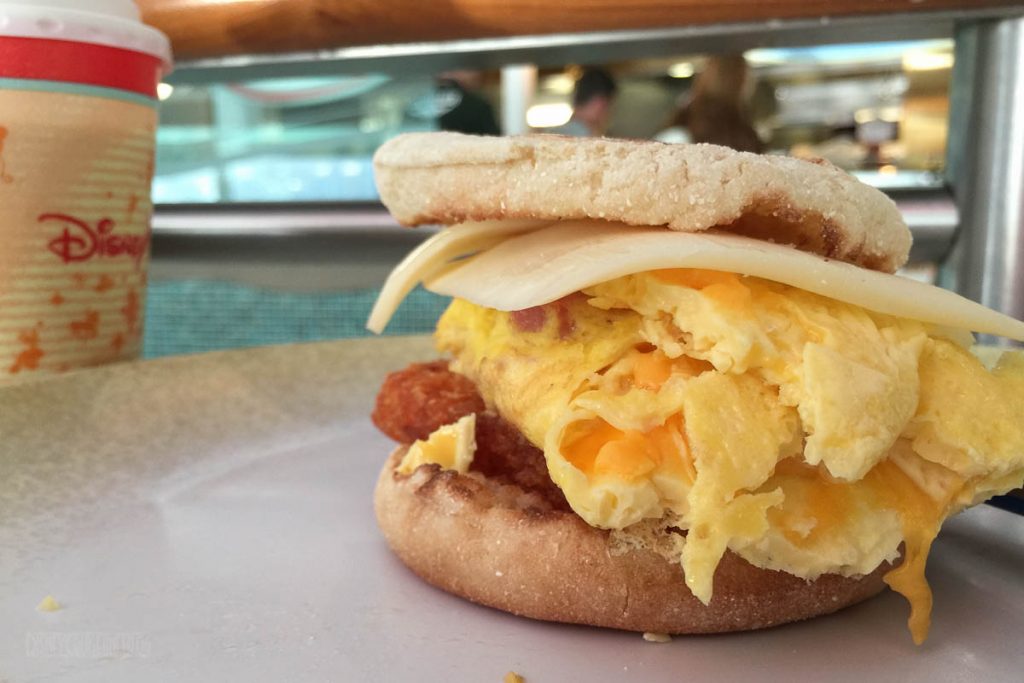 Ok, sorry for getting sidetracked. We finished our breakfast and returned to the stateroom to pick up our bags for the day. Last night, we tried to get as much ready as possible so we could just grab our bags and go. The plan worked flawlessly up until the point I decided to take my camera bag.

Since Emily booked this cruise close sailing, there wasn’t much time to research and book our own excursion as we usually prefer to do. Em paged through a few of the Caribbean Island books we have and what kept coming up for Tortola was 1) snorkeling at the caves, 2) going to the Baths at Virgin Gorda, and 3) Pusser’s rum. Emily chose a Disney excursion begrudgingly….She booked the Treasure Island Swim & Snorkel.

Our port adventure was scheduled to meet in the Tube at 8AM and once we were checked in, our group was led off the ship to meet with our catamaran captain on the pier. 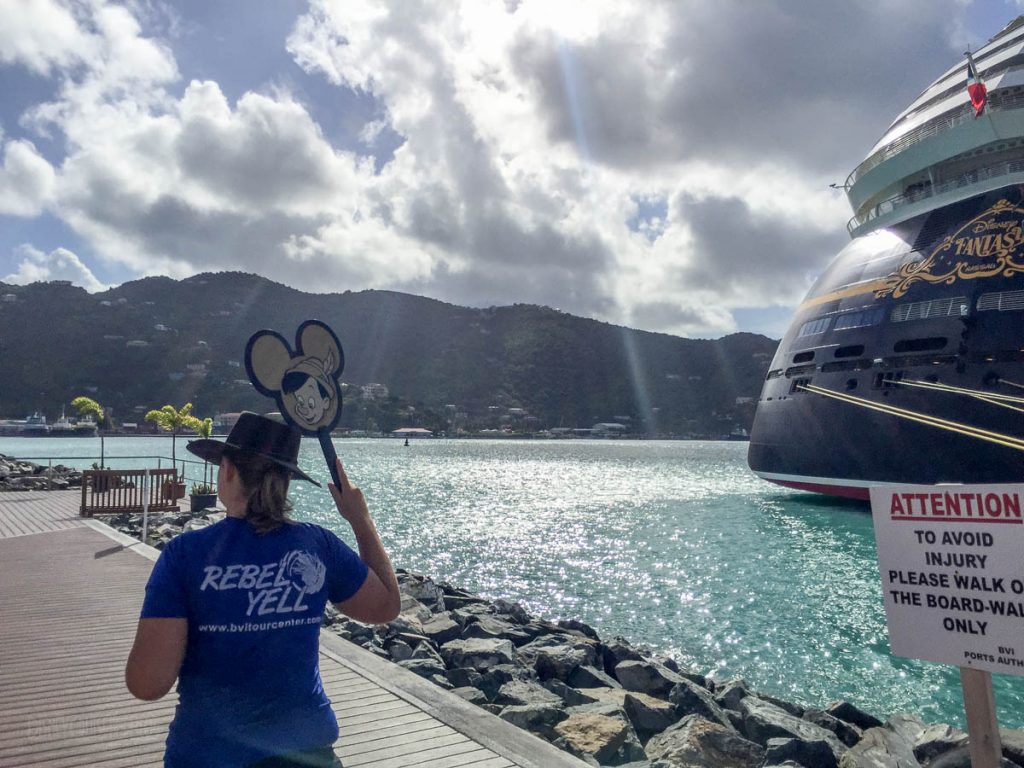 Once our group arrived on the pier, we walked about 500 yards (do not quote me on this – basically a short walk) to an awaiting double decker catamaran. I’m in not going to go into full details on the port adventure as it deserves a dedicated write up, plus I’d like to include video so that will need to wait until we get home. The catamaran left Tortola for about a 25 minute ride crossing the Sir Francis Drake Channel to Norman Island so we could snorkel around the caves. 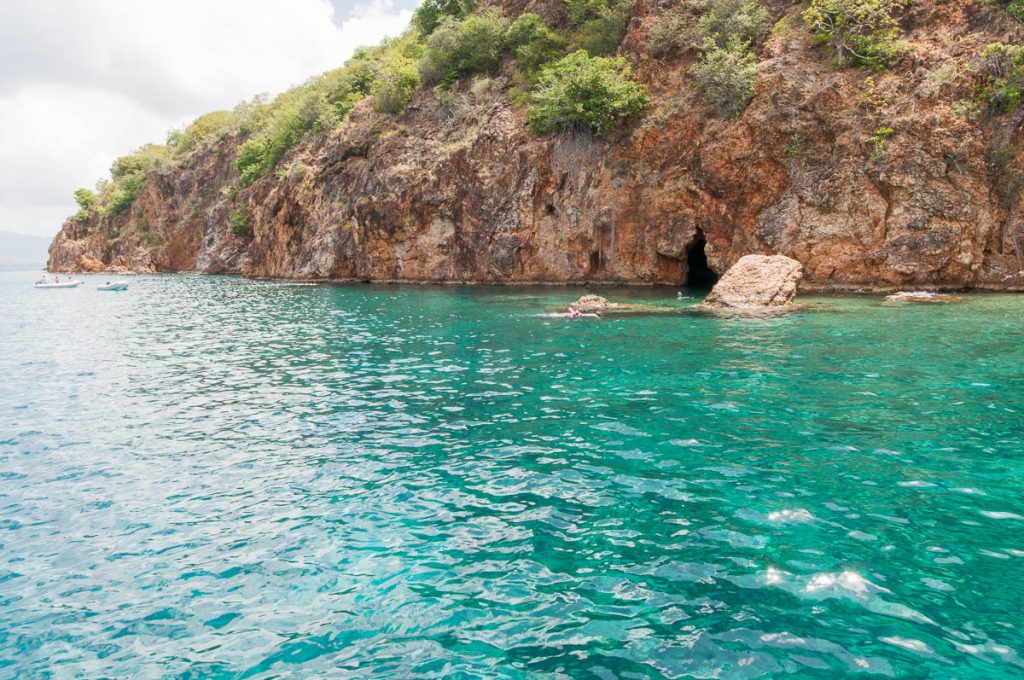 Once our time at the caves was over, we boarded the catamaran and headed to Pirates Bight for some beach time. There was a nice pier which allowed us to dock and take an extremely short walk to the beach. There were two sides to the beach. Once side was a The Club restaurant where the beach chairs cost $30 each, included a towel, a token for the restroom and the freshwater shower. On the other side of the pier there were “free” chairs. Although free, they were meant for customers of the Pirates Bight Restaurant and Bar on the beach. However, I did not see anyone shooed away for sitting in a lounge chair and not ordering a drink or food. There was even free wifi available on the beach.

The water at this beach was nice and calm, but was a bit cooler than the spot we were snorkeling earlier. At anytime during the day we could come and go from the catamaran. This was nice as it meant we did not need to schlep our stuff to the beach. When our beach time ended we returned to the catamaran and set a course back to Tortola. We were served complimentary rum punch or just fruit punch.

We returned to the same spot on the pier making it easy for anyone to return to the ship or head into Tortola. It is very important to note that bathing suites are for the beach and are not considered appropriate dress for walking around town. We planned ahead to have appropriate clothing so we could head over to Pusser’s Company Store and Pub for lunch.

Pusser’s was about a 5-10 minute walk from the Tortola Pier Park and you can still see the cruise ship from outside the restaurant.

The restaurant had a decent menu, but Emily and I were planning ahead for dinner so we opted to share an order of fish & chips and a side of homemade potato chips, which from the menu sounded great. 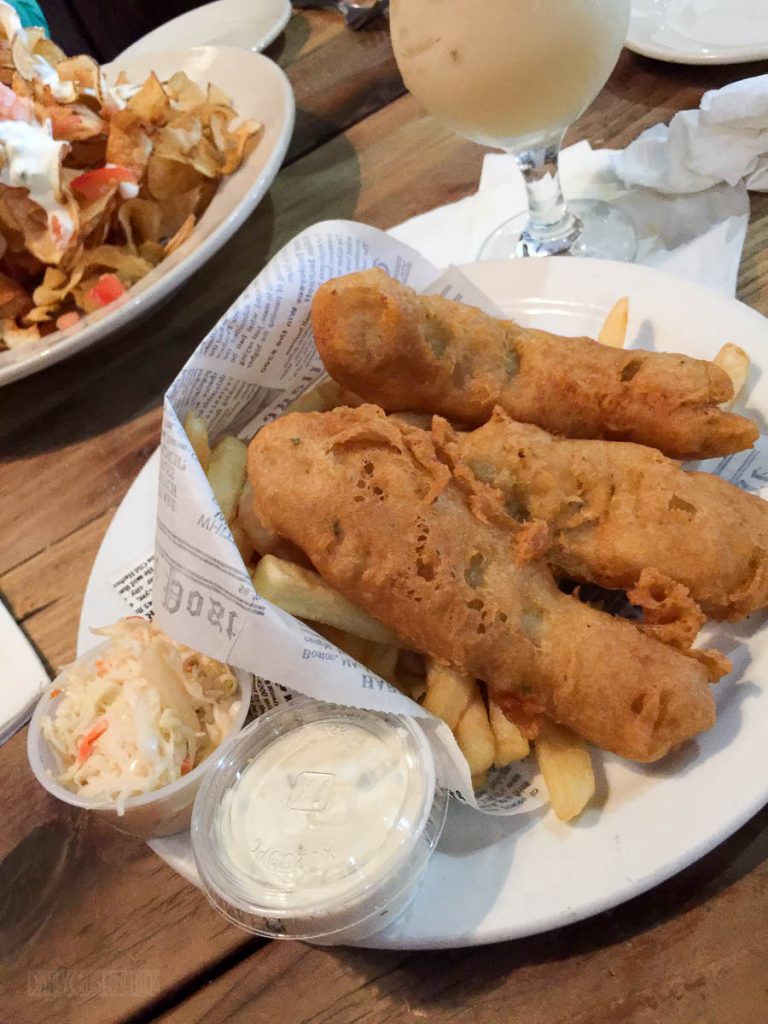 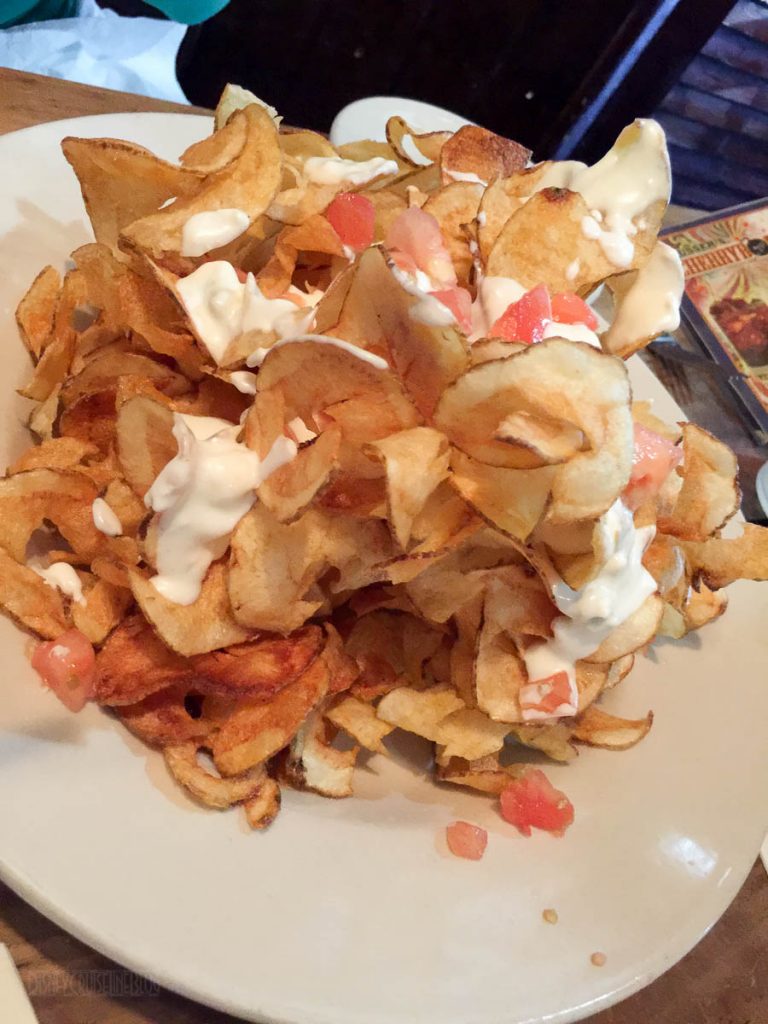 However, in reality, the chips were great, the toppings were much to be desired. It was drizzled with blue cheese dressing and had some diced tomatoes sprinkled on for some color. We did indulge in a Painkiller which is offered with two to four shots of rum. 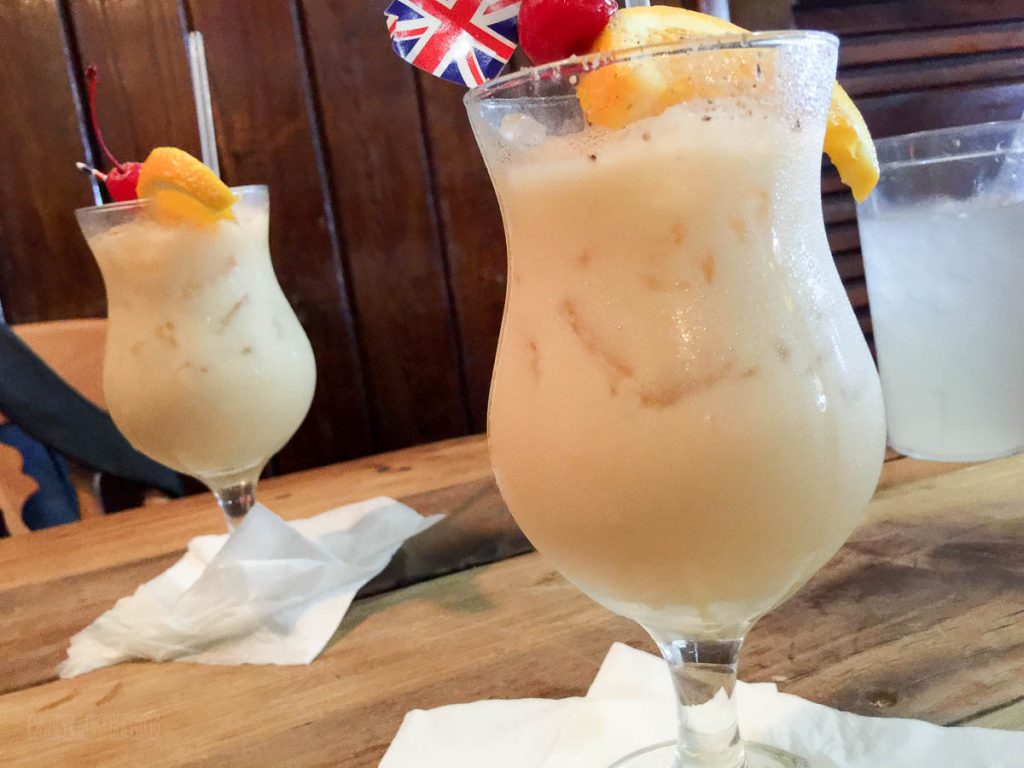 After our lunch walked back to Tortola Pier Park and back to the ship. I think Tortola deserves it own separate write up at a later date. I will say the area has potential once all of pier area is developed. Right now it is just getting started. 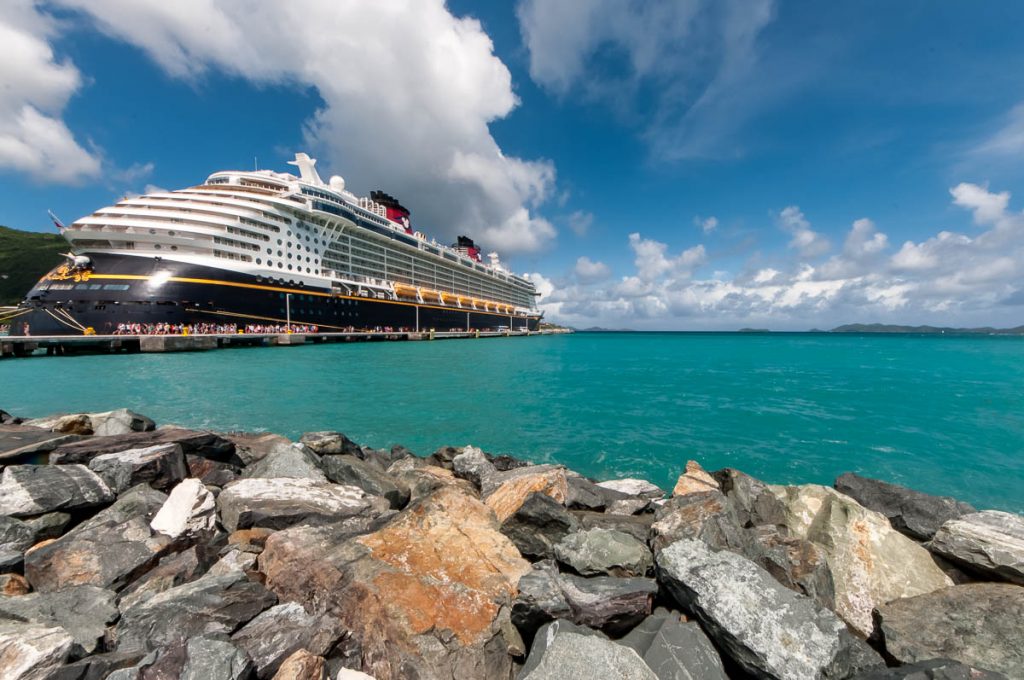 We still had a few hours before our dinner reservations. I stayed on the pier to take some photos while Emily and Isabelle returned to the ship. Security did ask them where I was, I’m guessing they haven’t received the memo from shoreside telling them to find a way to strand me in a port. It is reassuring to know security is looking out for me.

I made my way back to an empty stateroom which based on the time meant Isabelle wanted to go swimming. I found them around the pool where we all hung out for a little bit before heading back to the room to clean up for the evening.

Isabelle had room service for dinner then headed to the Oceaneer Lab just as we were leaving for our dinner at Remy. 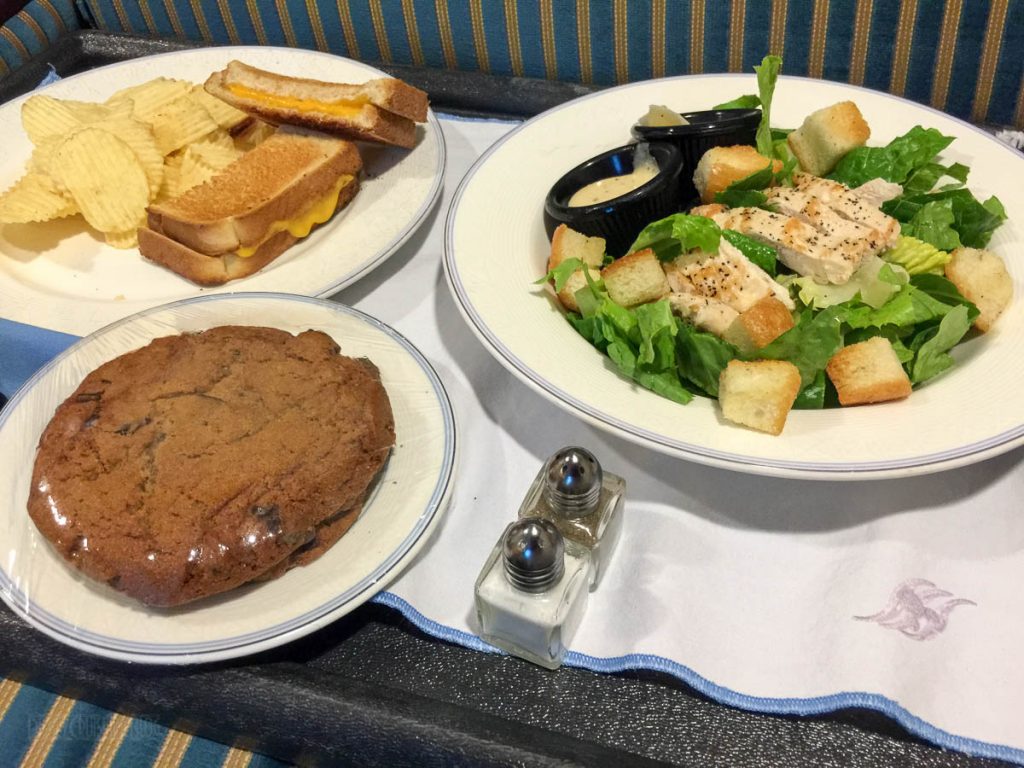 Upon arrival, we learned the French portion of the menu was just recently changed which added to our anticipation for tonight’s dinner. 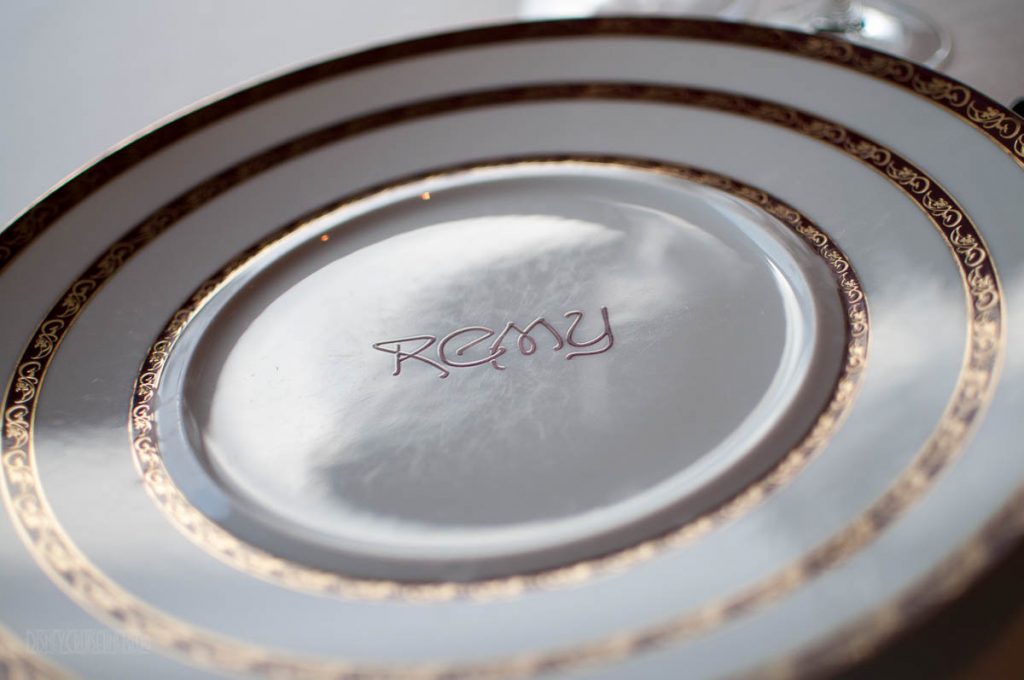 With my shellfish allergy and Emily’s preference to not eat pork or red meat we just asked our server to surprise us with each course working with those criteria. This has worked really well in the past. It also adds a bit of mystery to the dinner, as we are left guessing what will be served next with the silverware providing clues. We had an excellent dinner. Tonight, was another one of those nights that remind us why we love the Remy experience and keep coming back for more.

Our server really did a good job of pacing the dinner to enable us to get out in time for the start of the evening show… “What?!? A show, you say? You have been to one yet…” Well, tonight was the 3D showing of Finding Dory in the Walt Disney Theatre which we all wanted to see. We found Isabelle and our seats just as the movie was beginning. I thought Finding Dory was a really fun sequel with enough refresher information to re-introduce the characters and to catch moviegoers up on the events of Finding Nemo. Oh, the short attached to the film is simply adorable.

Tomorrow is another early morning for us so it was back to the room and to go to bed. I’ll admit, this trip log entry was a bit abbreviated for such an active day. The truth is that is that the port adventure, Tortola and our Remy dinner all deserve individual write ups. 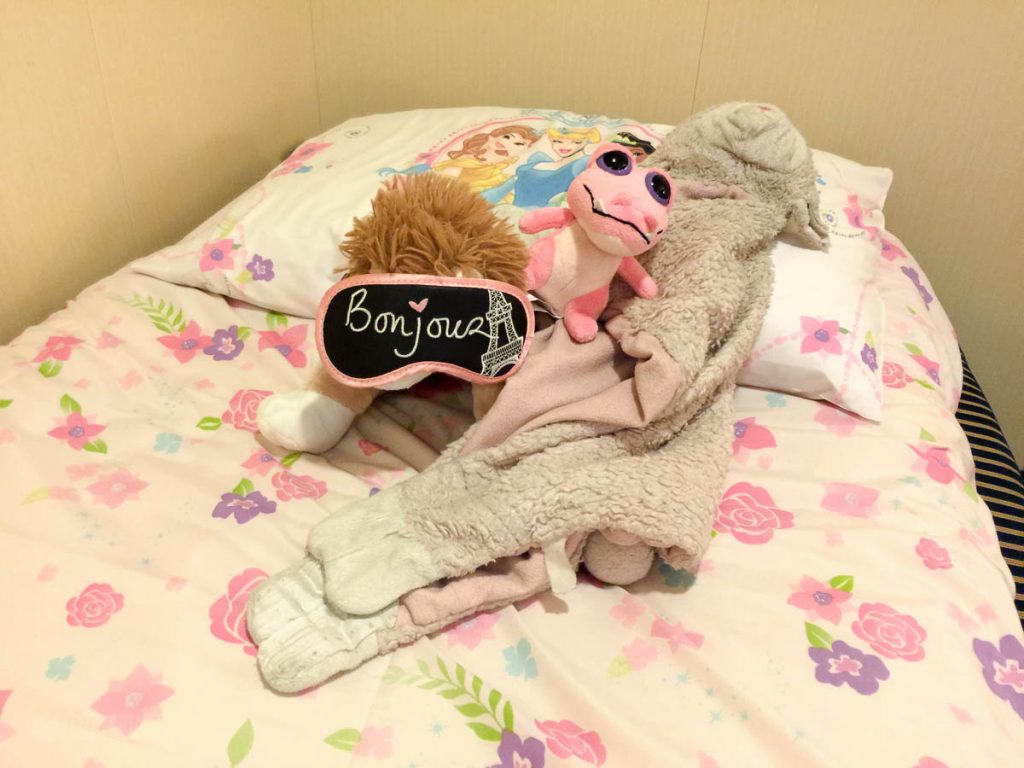