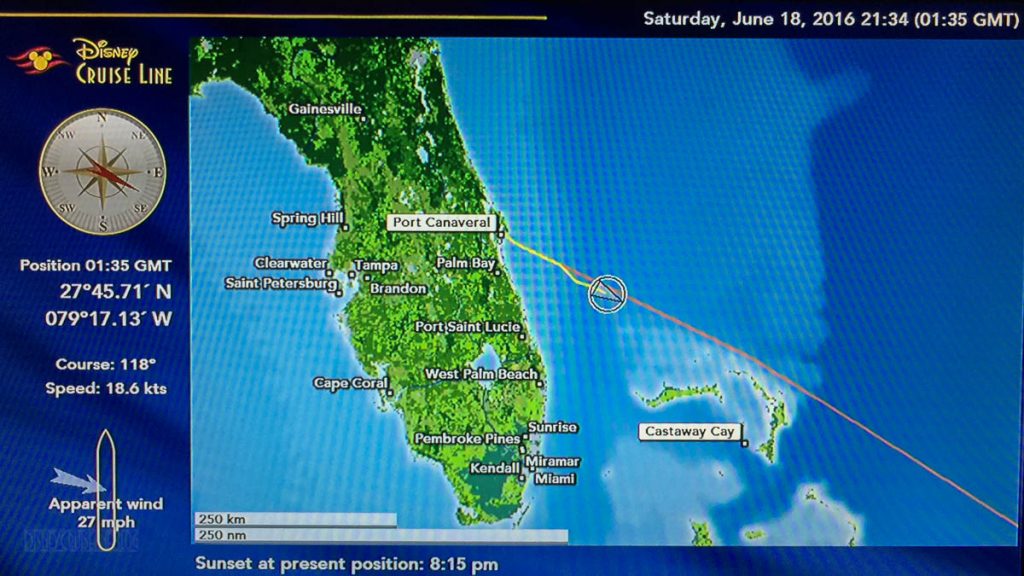 Saturday morning and our countdown ended! We were off to Port Canaveral for our summer sailing on the Disney Fantasy. This time around will be our first Eastern Caribbean cruise featuring Tortola. 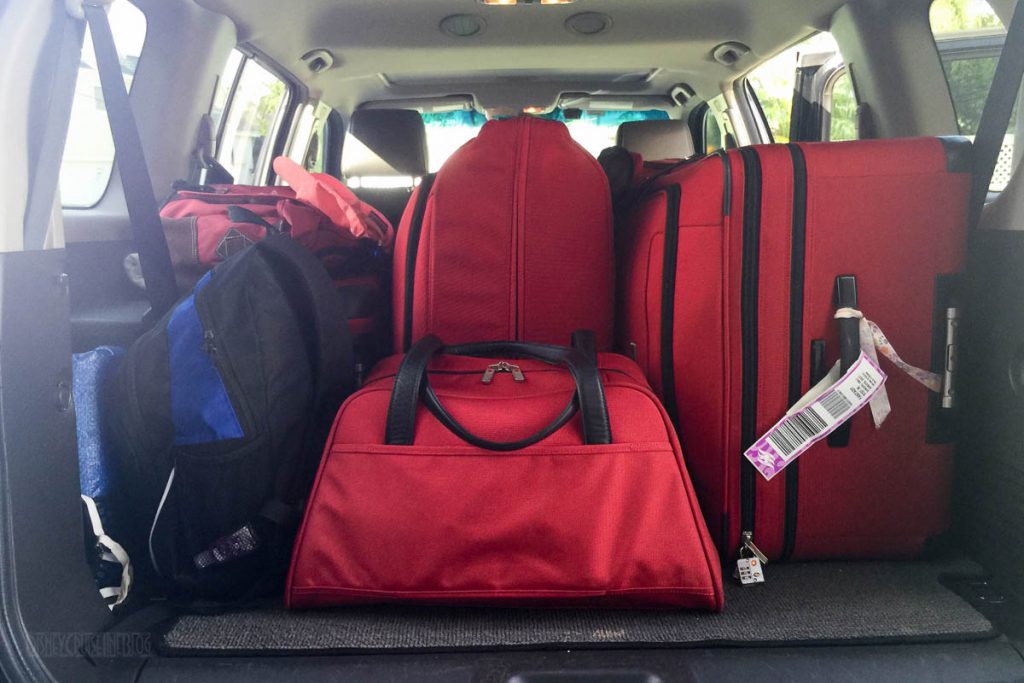 We arrived outside Port Canaveral around 10:30 AM and encountered a backup of cars waiting to enter the port. Turns out the traffic was congested due to cars backed up at the Cruise Terminal 10 for the Carnival Magic. There was a gentleman doing his best to route cars into the correct lane. Frankly, the port could easily put up some sinage to make things easier – left lane for Carnival, right lane for Disney.

Once past the bottleneck, it was smooth sailing around to cruise terminal 8. We dropped our luggage off with a porter & made our way to the parking area. Emily noticed the sign stating parking was $128, an increase of $1/day. The attendant told us that the price increased at the beginning of the month. Luckily, we pre-paid back when we booked the cruise and were grandfathered in and did not have to make up the difference.

As of June 1st parking at @canaveralport is up $1/day. 7-night cruise is $128. Prepaid is grandfathered in. pic.twitter.com/lWdXhiSJTU

We made our way to ‘our’ spot & took the escalator up to the 2nd floor, as there was a pretty big back up for security. There is a definite difference when sailing the classics vs. the Dream class ships in terms of the amount of people.

We got into the port at about 11am and it was already jam-packed with people. We made our way to check-in at the Concierge area, as Platinum guests can check-in there with very little wait. This time, they did not register Isabelle for youth activities as they have in the past. Once we were done, there was about 15-20 minutes until boarding. Concierge guests board first, then boarding begins after the Family of the Day. We bypass the Shutters embarkation photo and were the first ‘regular’ guests to board the ship. Time of boarding: 11:22am 🙂

Since we knew we’d need to be up at Royal Court to hopefully change our dining time, we decided to have lunch one deck down on deck 2 at Enchanted Garden to stay close by. Lunch begins serving at Noon, so we used the time to relax on a bench outside the restaurant. Isabelle & I stopped at the Midship Detective Agency kiosk to begin a game (which we later found out we did too early, as it had been cleared out when we went back to play later in the afternoon).

Just before noon, the doors opened and we went inside. We were quickly seated and made our way up to get lunch. It was nice not to be asked 50 times if we wanted a water package, a drink, or the wine package. We had a peaceful, quiet and light lunch. 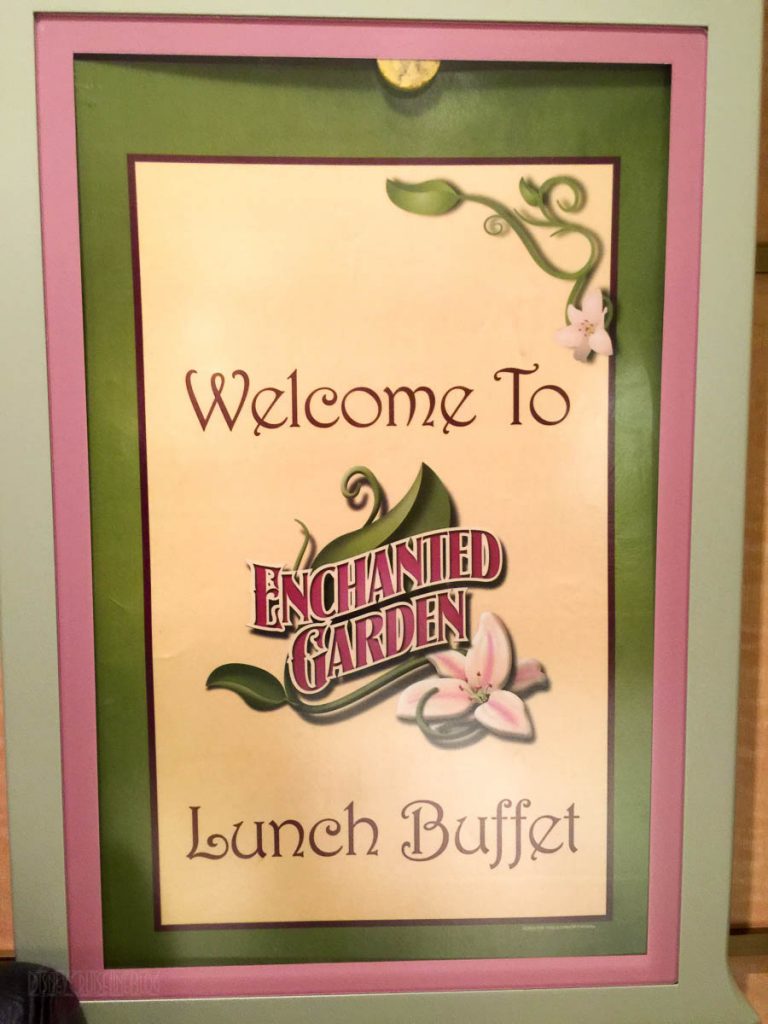 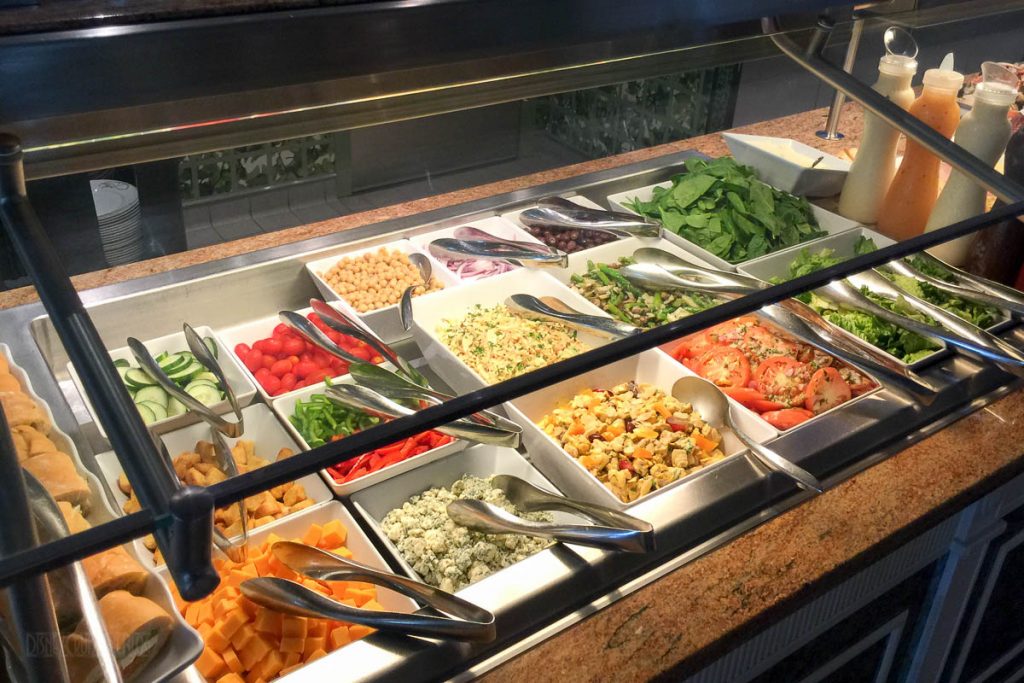 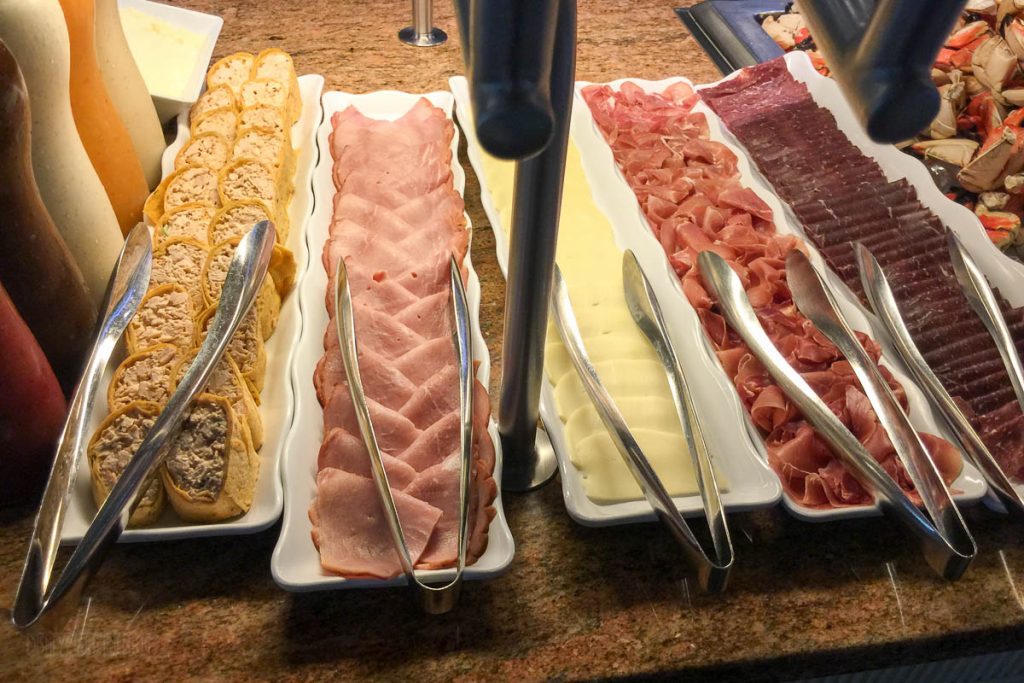 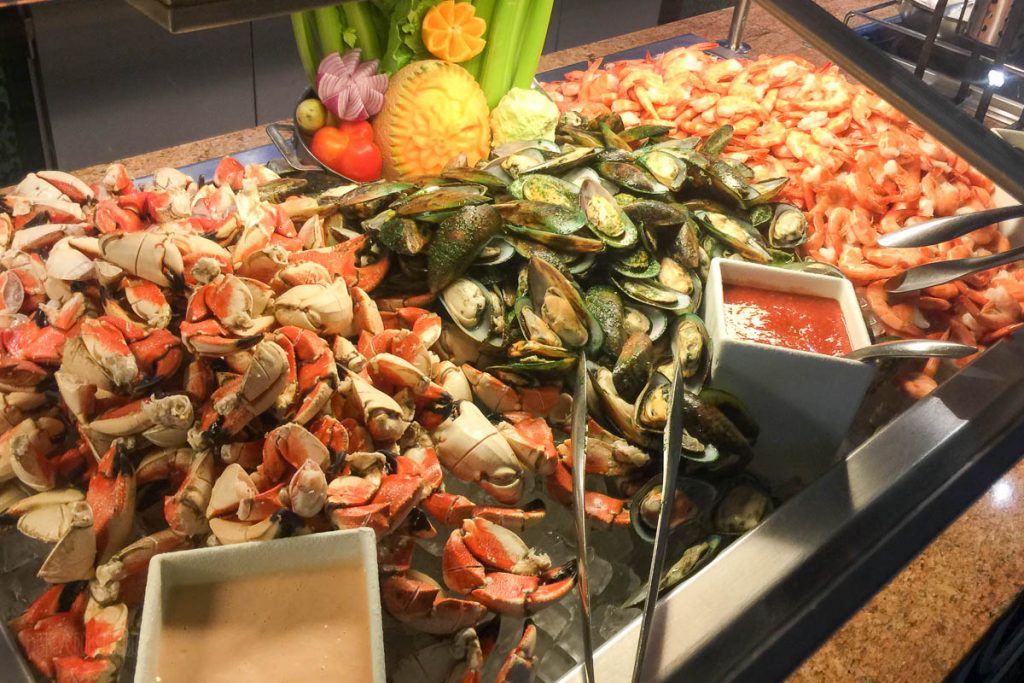 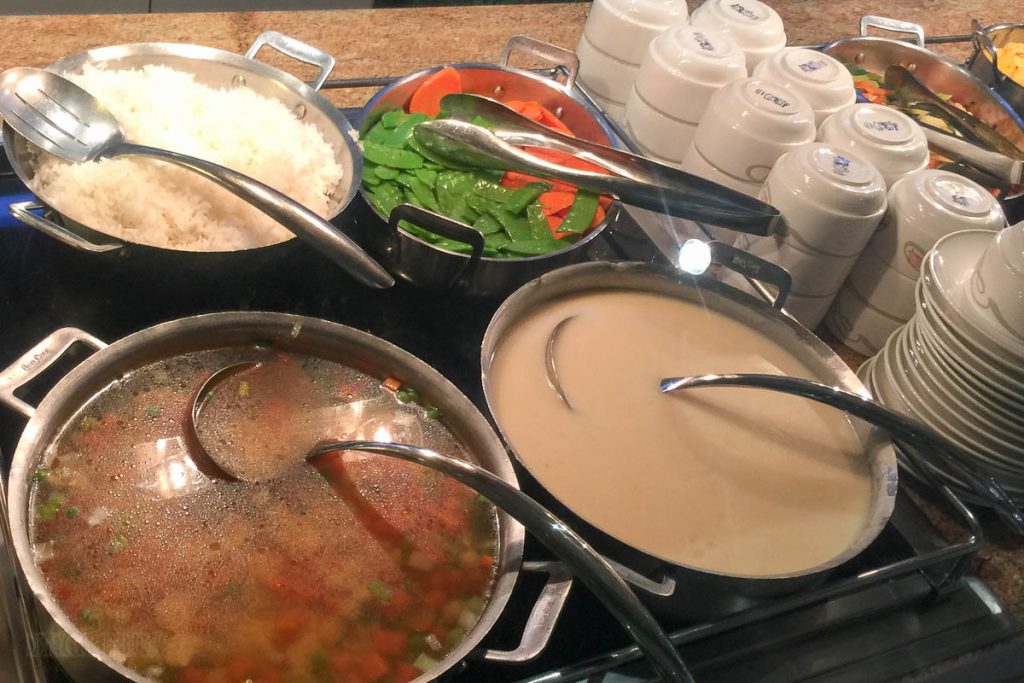 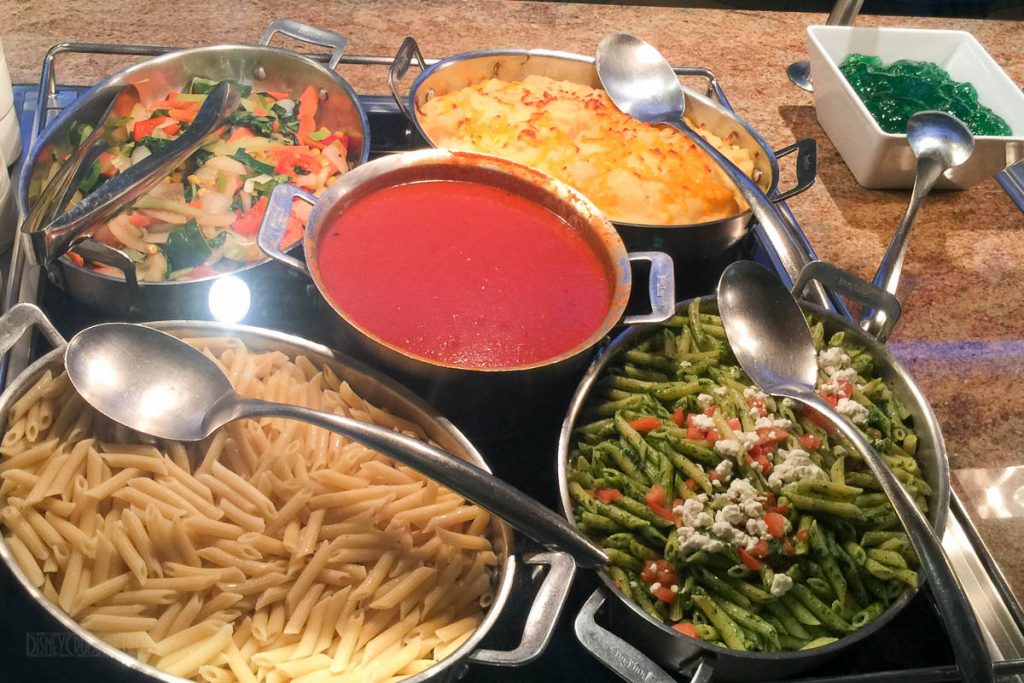 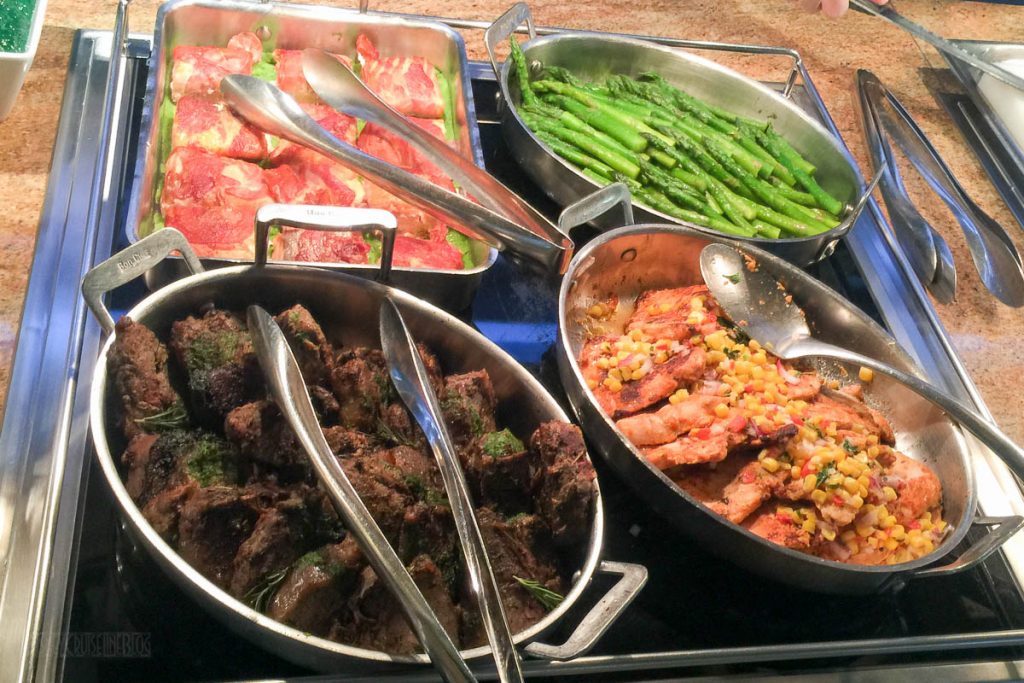 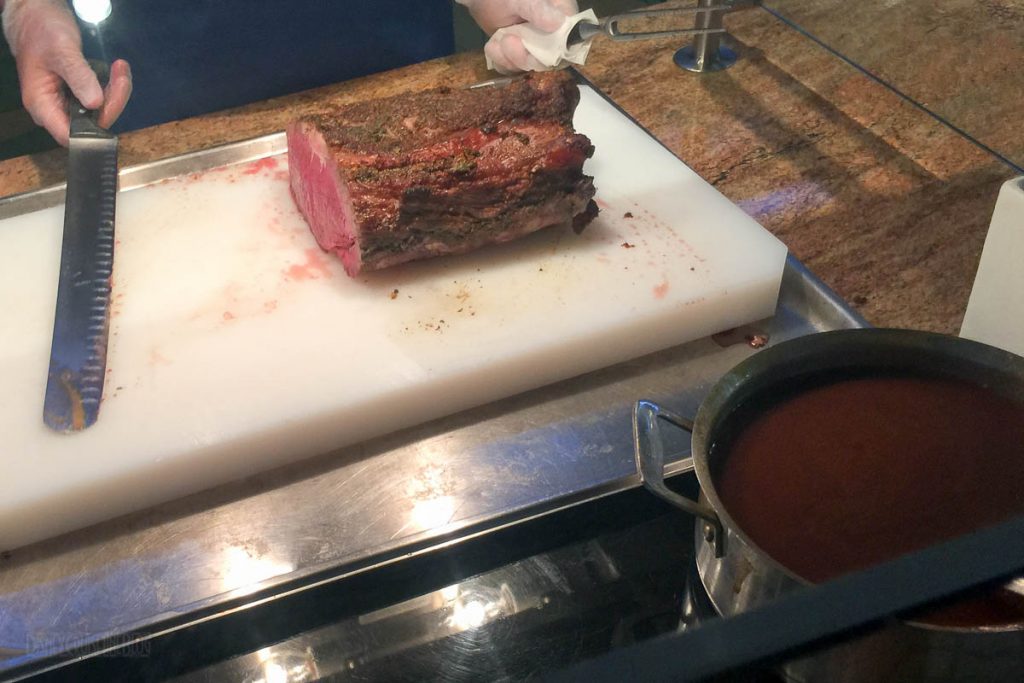 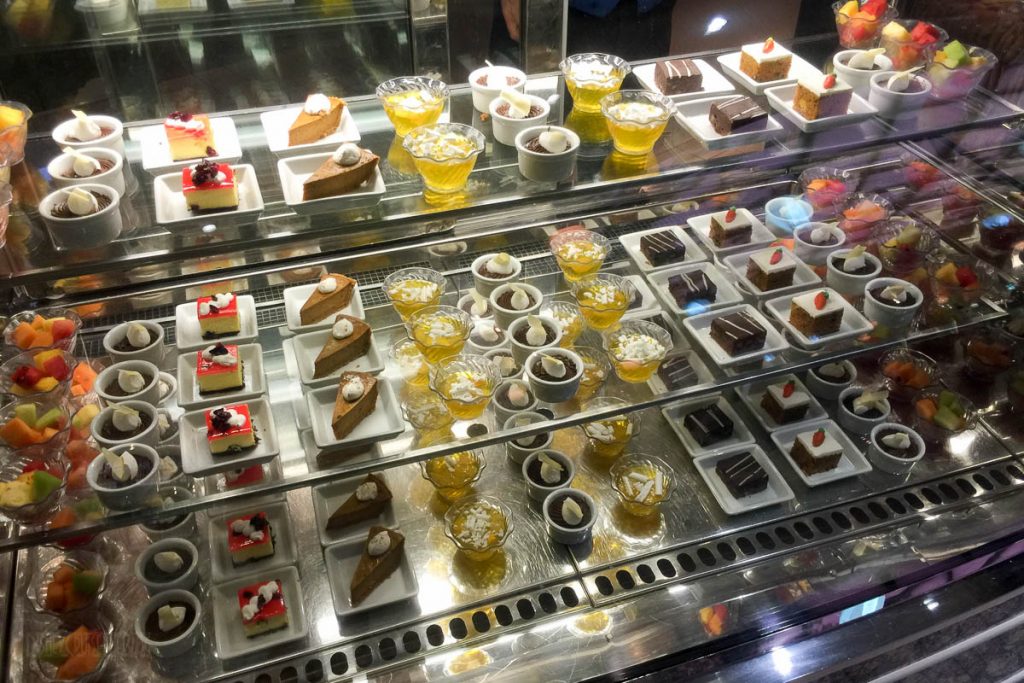 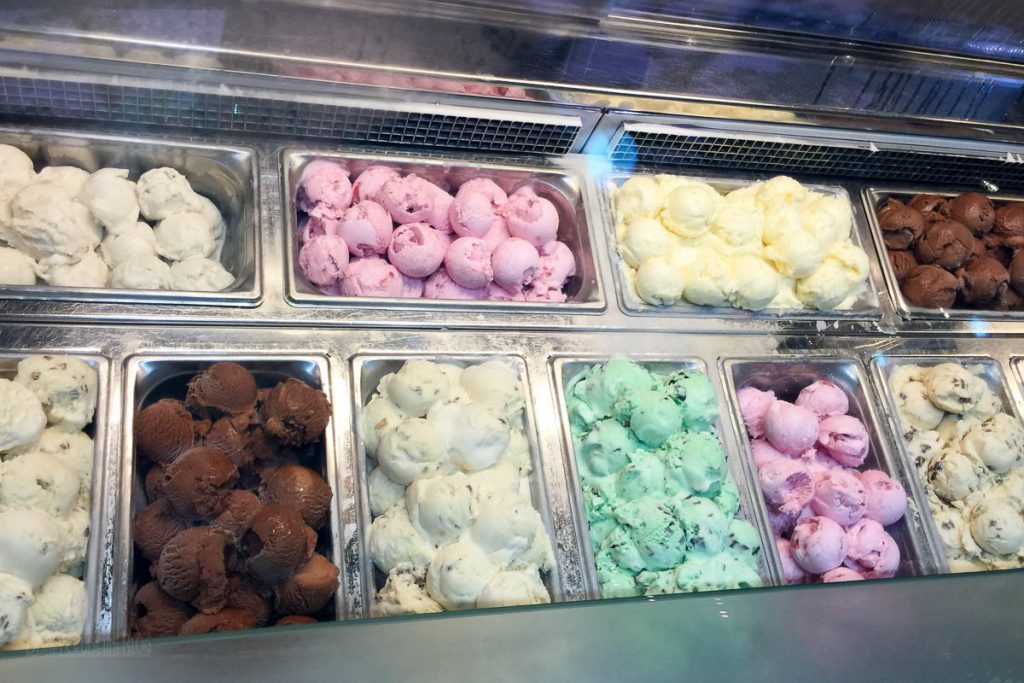 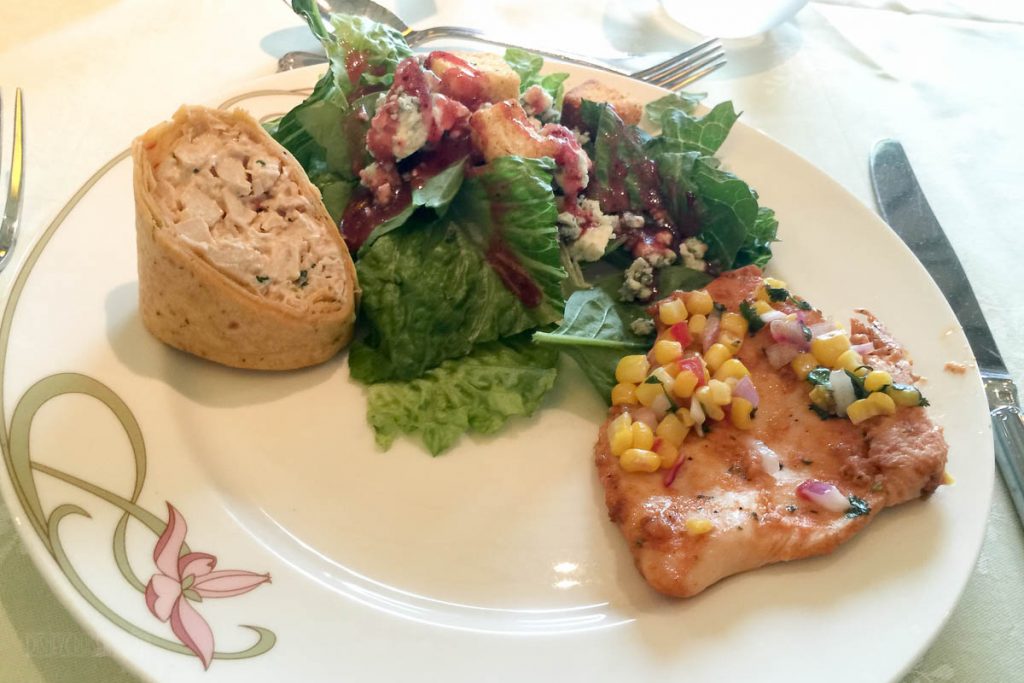 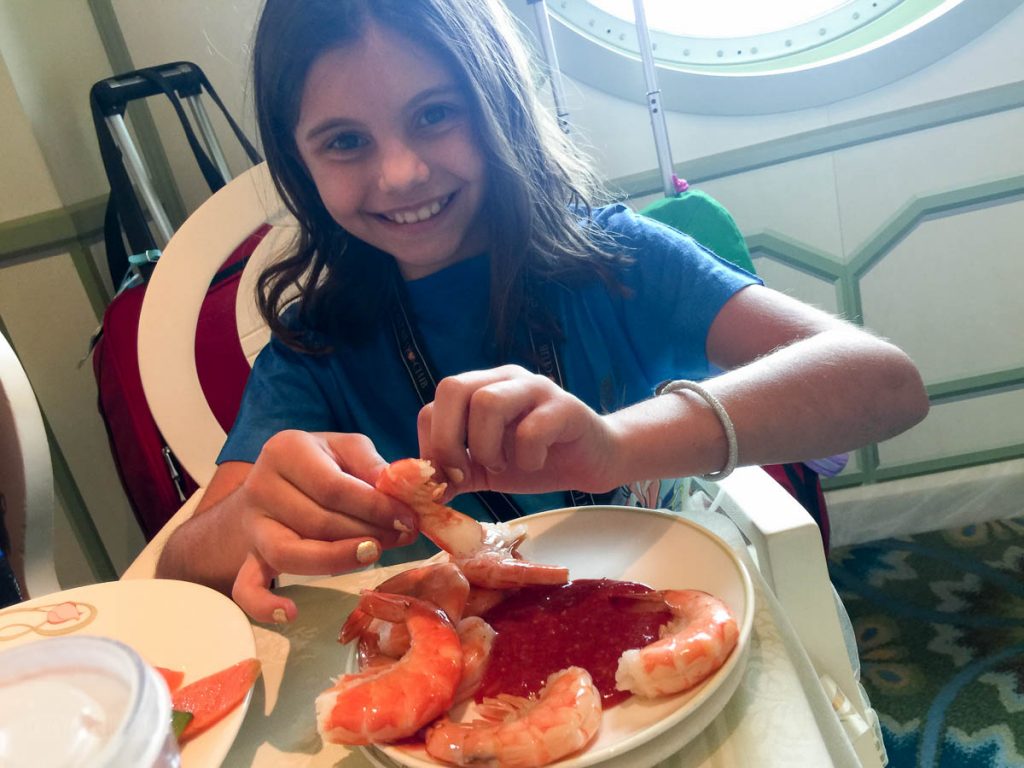 At 12:30pm, we went up to Royal Court, deck 3 midship. We were the first in line for dining changes, which started at 1pm. Since we booked fairly close to sailing, we were put into late dining and waitlisted for main. This has happened to us before, but this time, we were not moved into main. People have different reasons for liking the certain dining seating times – for us, we are early risers, early to bed, so 8:15pm dinner is not at all for us. Isabelle’s bedtime is at 8:30pm and Emily is usually out between 10–11pm. Sure, we are on vacation and go a little lax on Isabelle’s bedtime, but we know that a well-rested child is a well-behaved child. We were greeted by Cedomir, who has been our head server several times on both the Fantasy & the Magic and get got us all squared away – no issue at all! 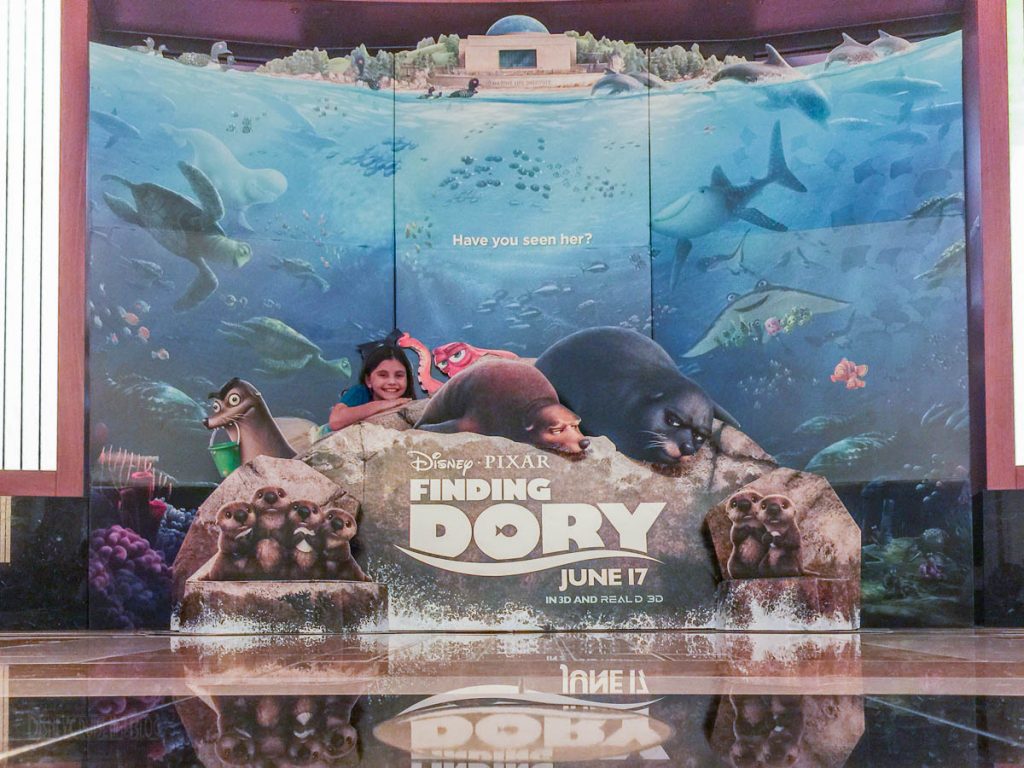 We still had some time before we could drop our carry-on luggage off in the stateroom, so we wandered around to the shops where Isabelle took advantage of the Finding Dory photo op before moving along to La Piazza, and then stopped at the kids club to get Isabelle squared away with her Oceaneer Band. Afterwards, we headed up to our deck to wait about 10 minutes until our stateroom was ready.

Just at 1:30pm, we made our way to the stateroom to find our Platinum Castaway Club gift of a tote bag and two travel mugs. 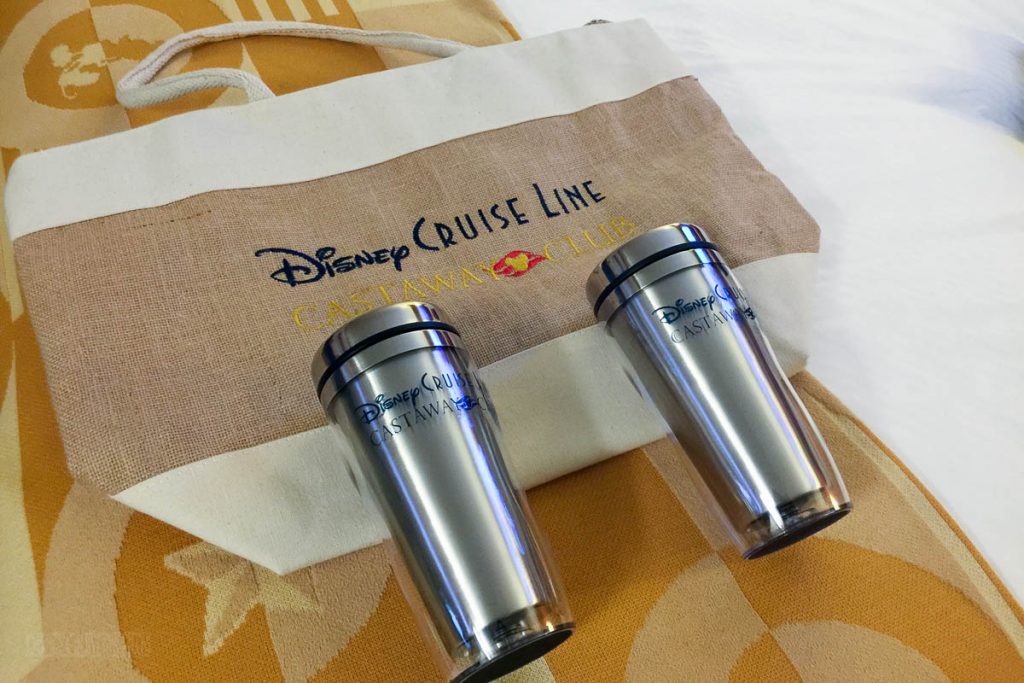 This particular stateroom has an interesting layout; no privacy curtain amongst a few other things, but it does give the feel that is has more floor space to walk around. We missed some of the usual storage, but still were able to fit everything in without difficulty. For a little more closet space, I moved some of the life jackets to under the bed. 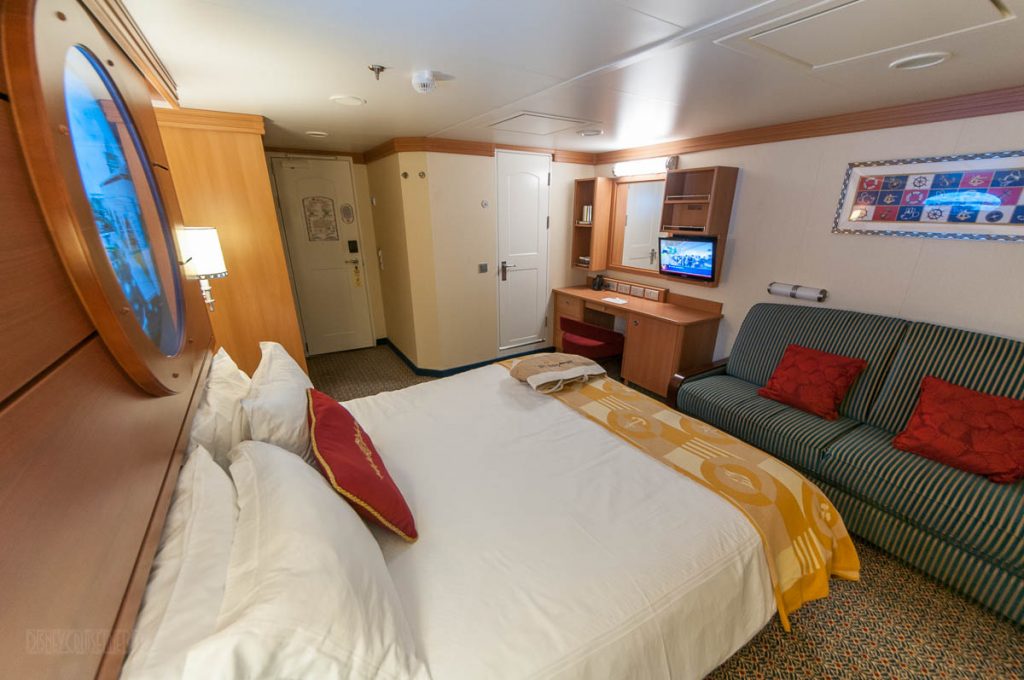 Our luggage arrived and we quickly unpacked while the movie ‘Mary Poppins’ was on in the background and then I went to iron tonight’s dinner clothes while we waited to attend the stateroom until the mandatory lifeboat drill.

Our muster station was outside the atrium on deck 4 port side. The drill went off rather quickly thanks primarily to everyone showing up in our station. When we were dismissed from the drill we hung out on the deck to let the crowds dissipate. The rain was moving in and as a result, the sail away party was moved into the atrium. Normally we skip the sail away party, and today we were planning to go up on deck, but with the rain we opted to sit in the lounge chairs on deck 4 as we sailed out of Port Canaveral.

While we were outside, we began talking with a family sailing on their first cruise. Time started to slip away and we realized we needed to go back to the room and get ready for dinner.

We arrived down in Enchanted Garden and met our serving team. Our dinner selections tonight were extremely blogable. For starters, Emily and I ordered the same salad, the Spinach and Raspberry Salad with toasted pine nuts, gorgonzola, raspberries and raspberry vinaigrette. We both really like this salad. 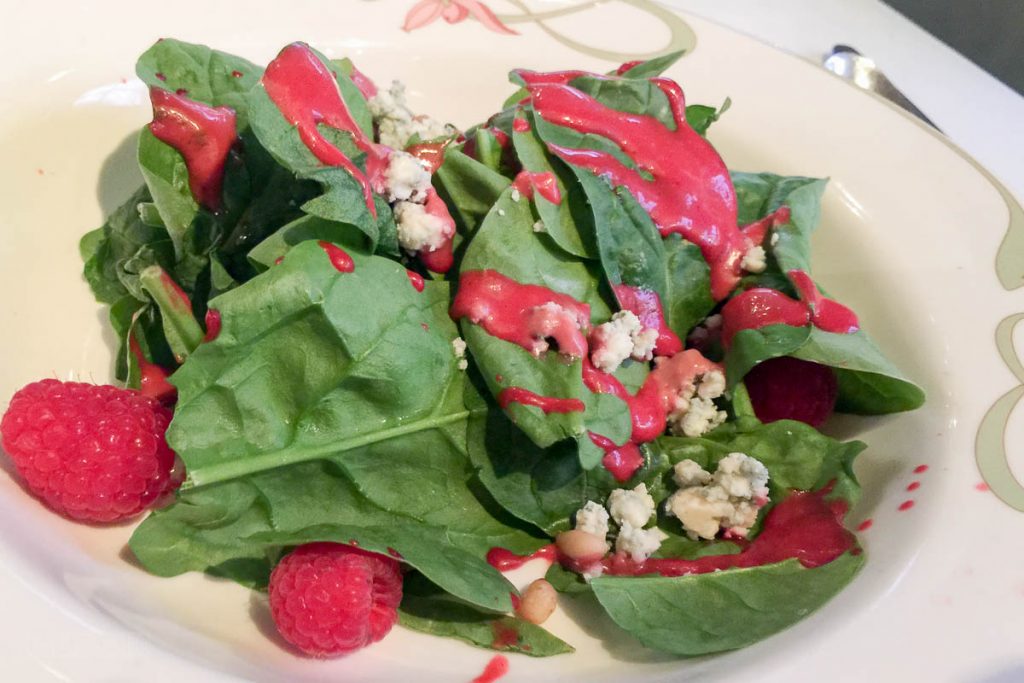 Isabelle ordered the heirloom tomato soup which was “very good.” It would go great with an artisan grilled cheese sandwich say for a room service lunch. 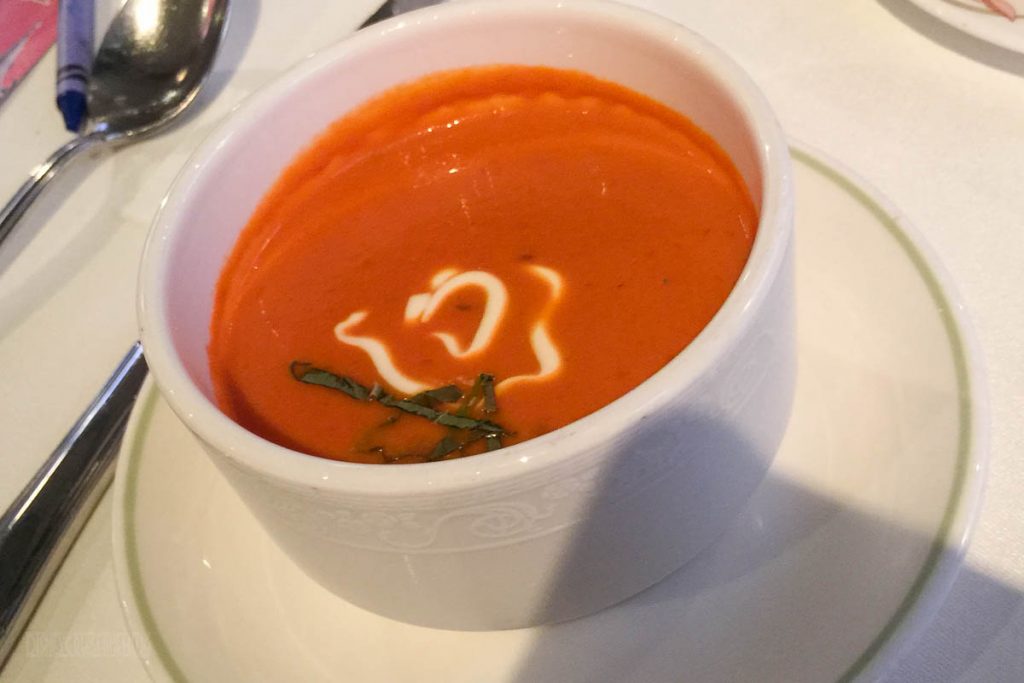 Continuing the ultra blogable dinner, Isabelle and I both ordered the Pan Seared Sea Bass which I am almost sure was the same as I had in February in Cariocas on the Disney Magic. I thought the sea bass was excellent and Isabelle thought it was “delightful.” 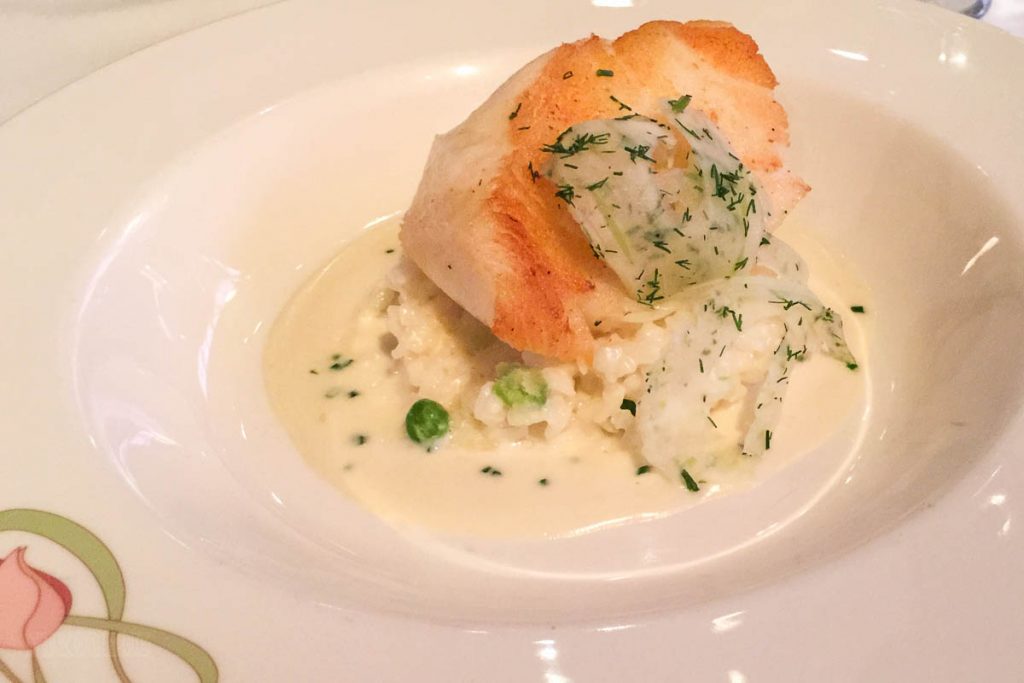 Emily ordered the pan seared scallops, which were “fine.” 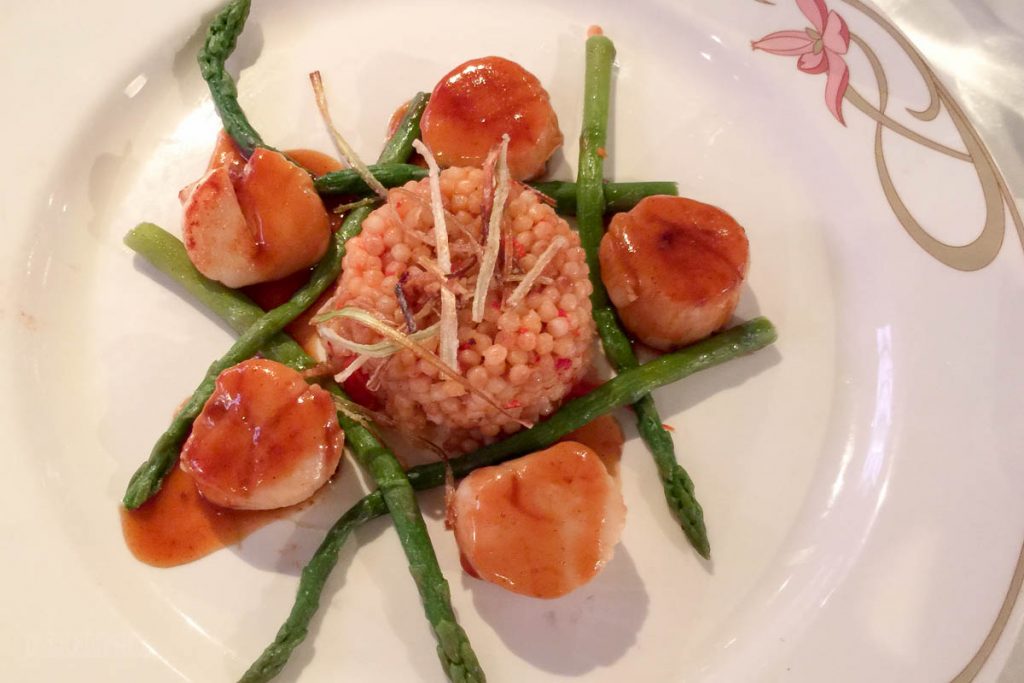 While we were waiting for our dessert, we were served Passion Fruit Orange and Chocolate Sea Salt Turkish Delights. As much as I love all things orange, the chocolate sea salt was the real winner! 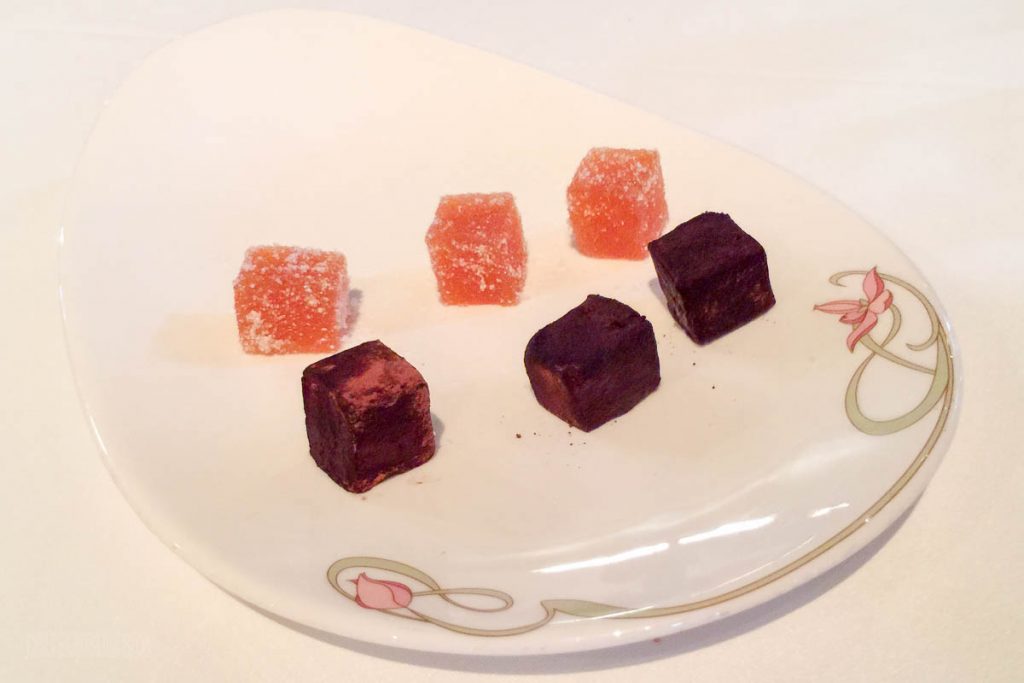 To finish dinner, we continued the trend of ordering the same items. Emily and I went with our server’s recommendation of the warm sticky date pudding. 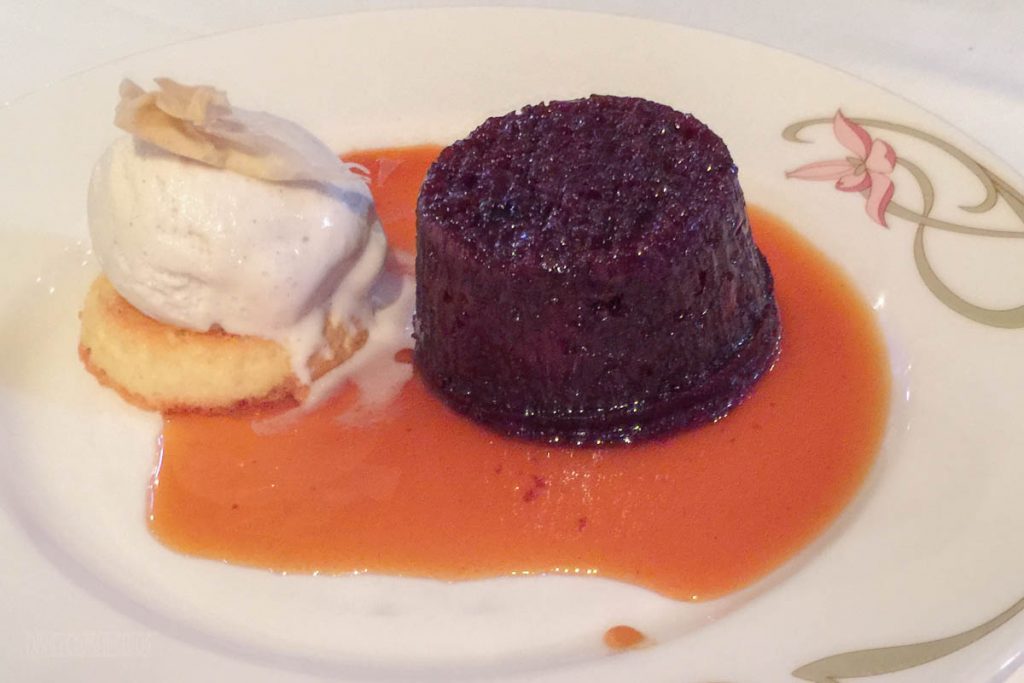 Isabelle selected the Silky Dark Chocolate Mousse which she says was good, but not the best dessert she has had. 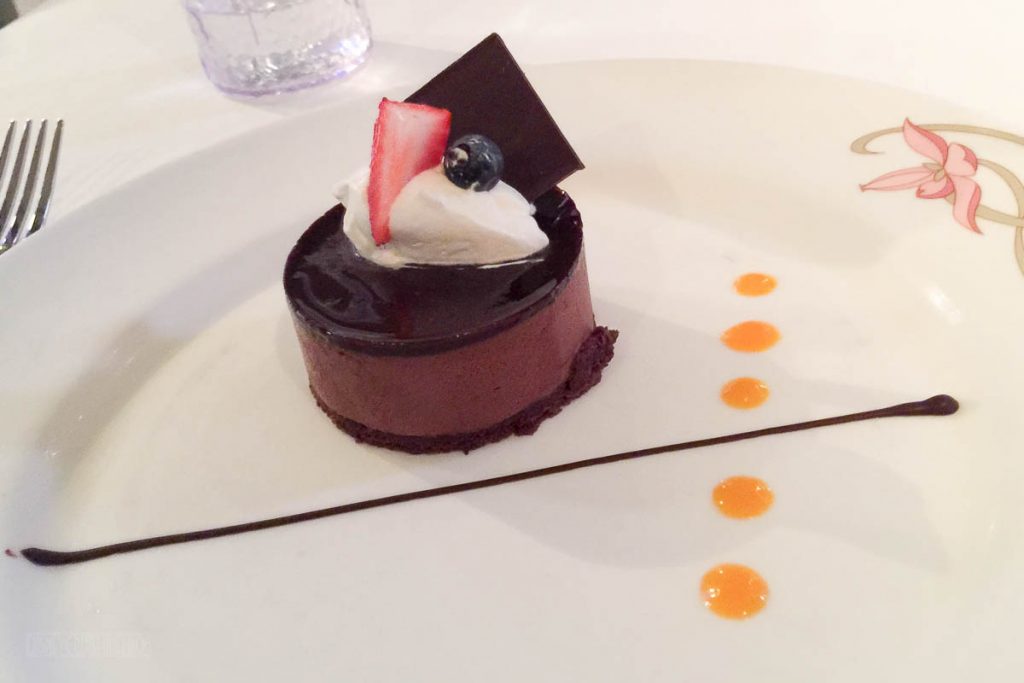 Earlier in the day as we were walking past the shops, a crew member told us there was a lot of great merchandise. So, after dinner we went over to check out the merchandise. We didn’t find anything, but we did pick up some duty free items in White Caps that are cheaper on the ship than elsewhere. One change we noticed since the last time we purchased liquor onboard is that it is no longer delivered to our stateroom on the final night of the cruise. Instead, we pick it up as we are leaving the ship on the final morning.

We started to make our way back to the stateroom, but stopped by the rebooking desk just as Matt was working on our request we placed in the box earlier.

The next stop was over to the Vista Gallery where we discovered a print of the four ships that hangs in the stateroom. The design has been on t-shirts before, but this is the first time we’ve noticed it for sale!

It has been a long day for all of us so it was time to head back to the stateroom to finish Mary Poppins and relax a bit before bed. 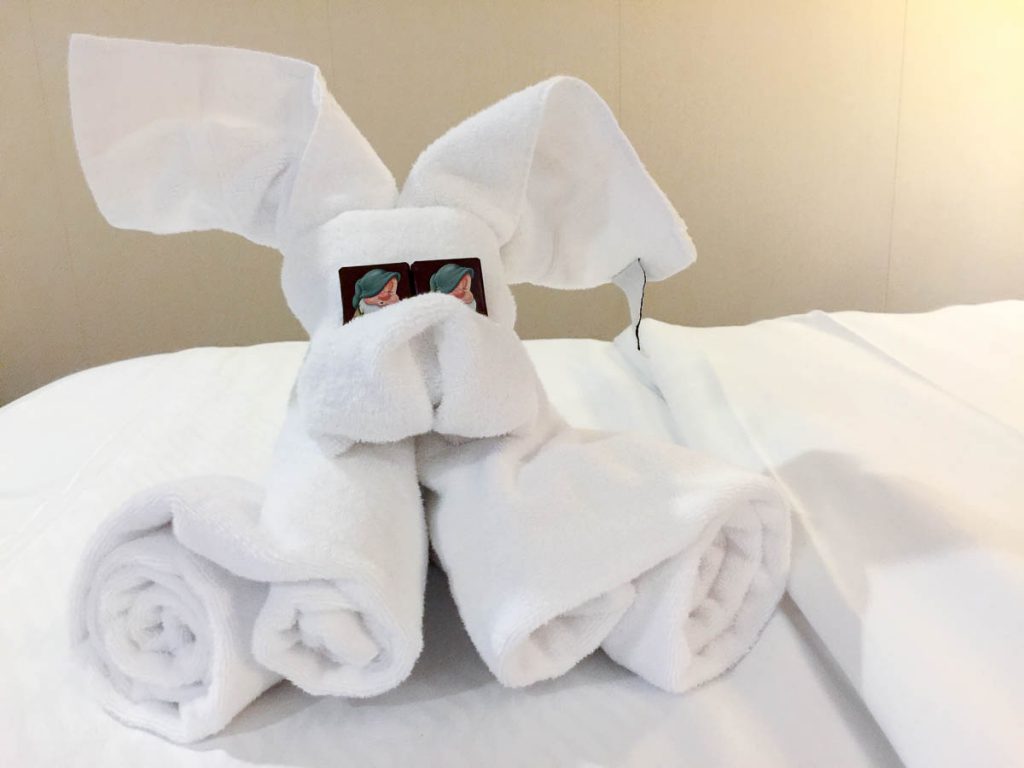 With the rain and the sail away party moved inside today felt a bit off. In fact, I haven’t been up to the upper decks yet. I guess the on deck sail away party really does set the tone for the trip. Oh well, no big deal, we are still cruising!

Please let us know in the comments if you have any questions about the Disney Fantasy or would like to see pictures or learn more about something specific on the ship since were are onboard for the week.