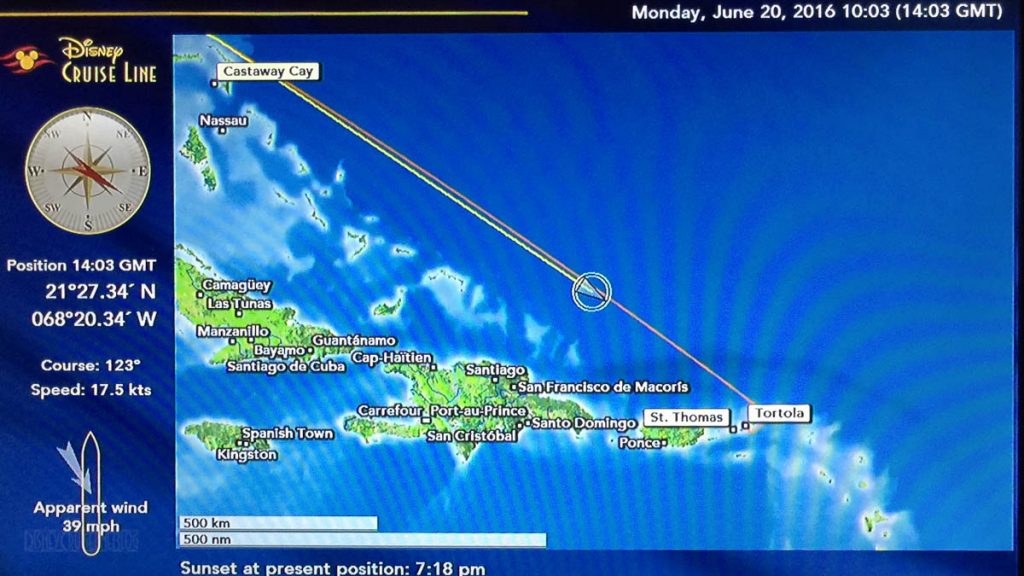 A new day that started by being woken up by my weekday alarm that I forgot to turn off. Emily was already at the gym. She was the first one in when it opened at 5:55am. Just before 7am, Isabelle and I walked up to the pool deck so she could join in her mom in some morning yoga while I fought with DCL’s website to check this week’s special offers.

DCL’s website is free to browse once connected to the DCL-Guest wifi hotspot without logging in, but it is terribly SLLLLOOOOWWWWWW compared to other sites that are loading fine. I felt like I was dealing with Flash at Zootopia DMV. 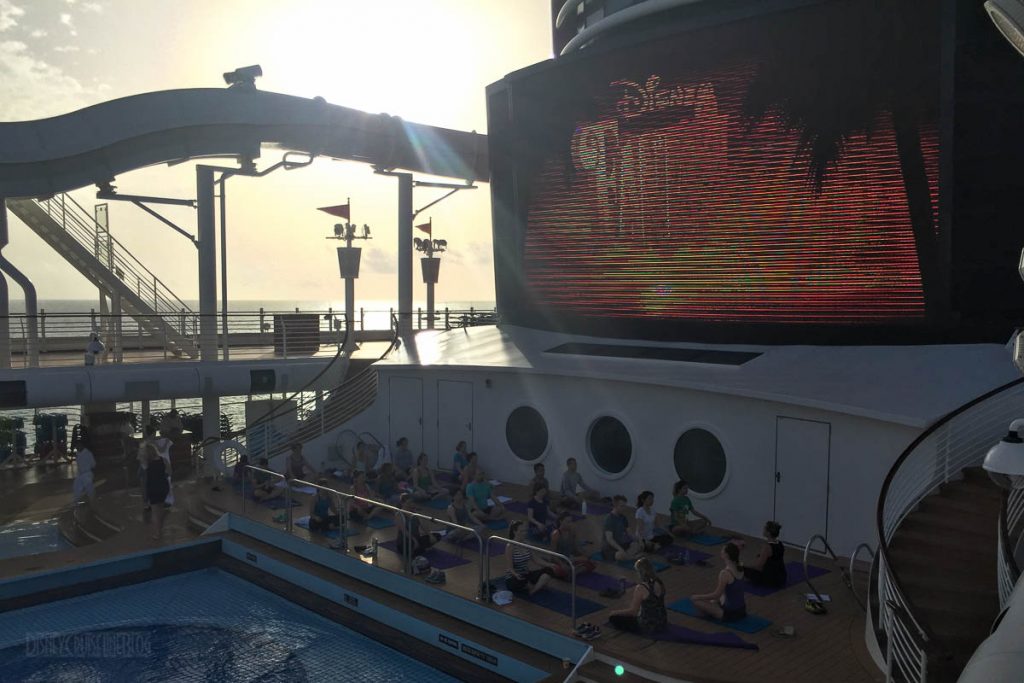 Anyway, while they were doing yoga, I spent my time between a table poolside and the Cove Cafe. After yoga, we had a quick breakfast on deck from Cabanas. After a quick refresh, we returned to the pool deck. We arrived just in time for the first film of the day, Pinocchio. The plan for today was to enjoy the pool deck and that is what we did. Isabelle moved around from pool to pool and Mickey slide while enjoying the second film, Hercules.

Emily went out of her way to Currents Bar to get the Yellow Bird, made fresh as it is sitting premade in vats at the pop up bars on deck. 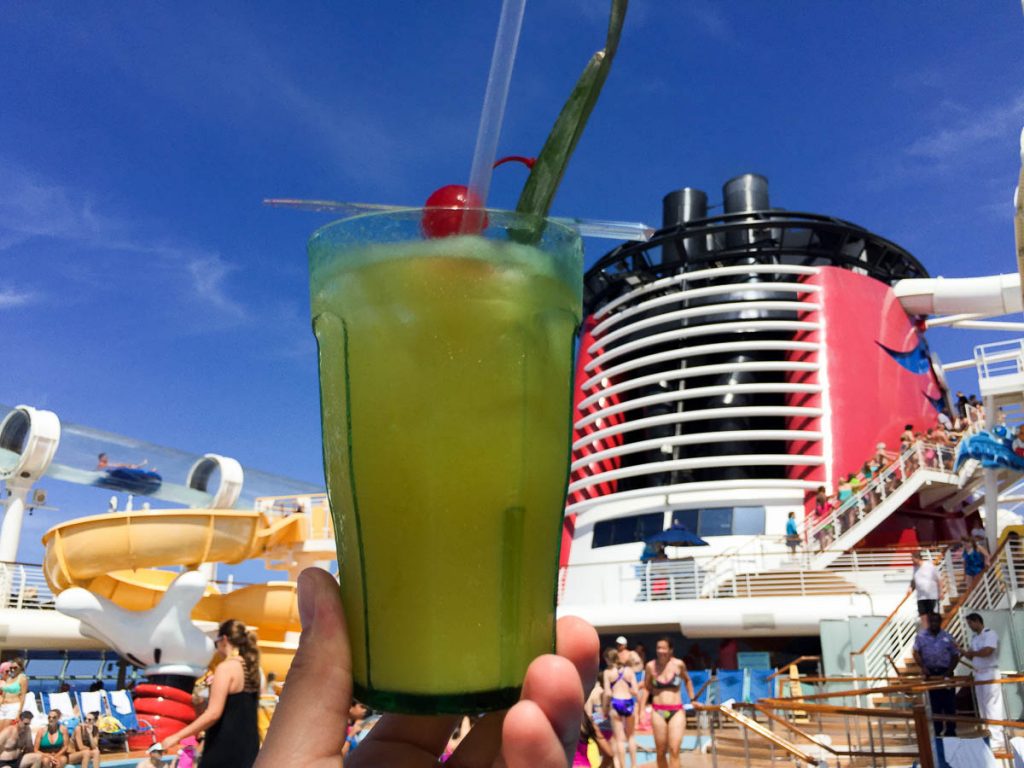 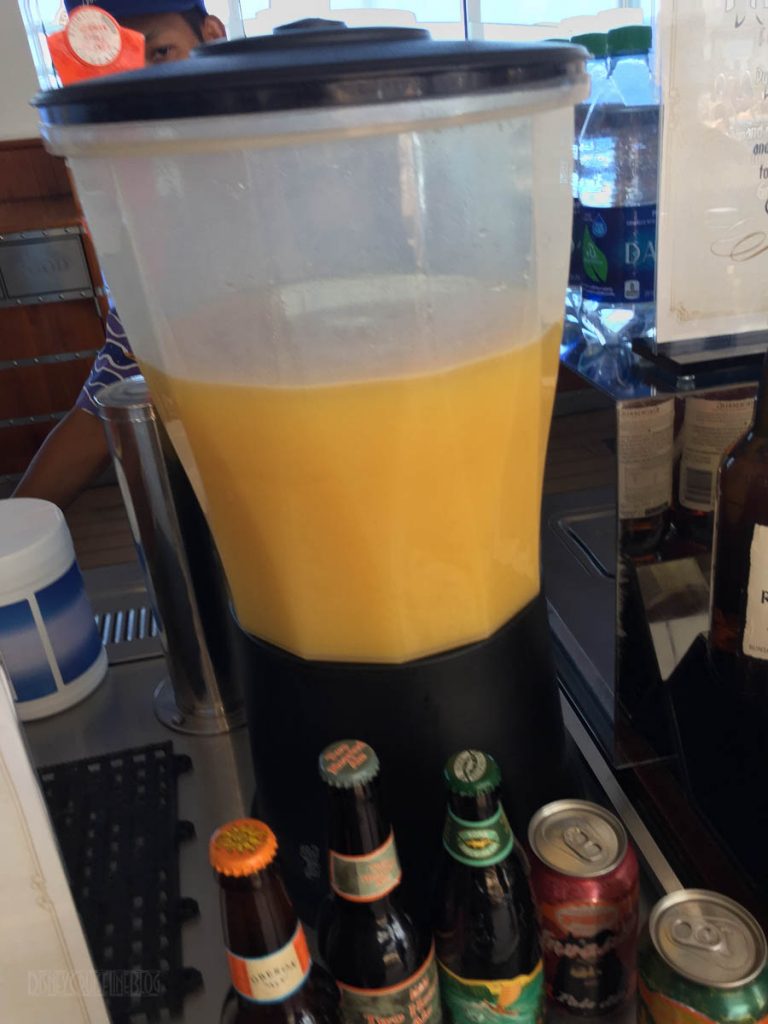 For lunch, we had some pizza from Luigi’s and Isabelle grabbed some shrimp from Cabanas. Now this is just our opinion, but the pizza served from Pinocchio’s on the classics is far better than the stuff coming out of Luigi’s. Make that reason number 1998 why the classic are our favorite class of Disney Cruise ship. 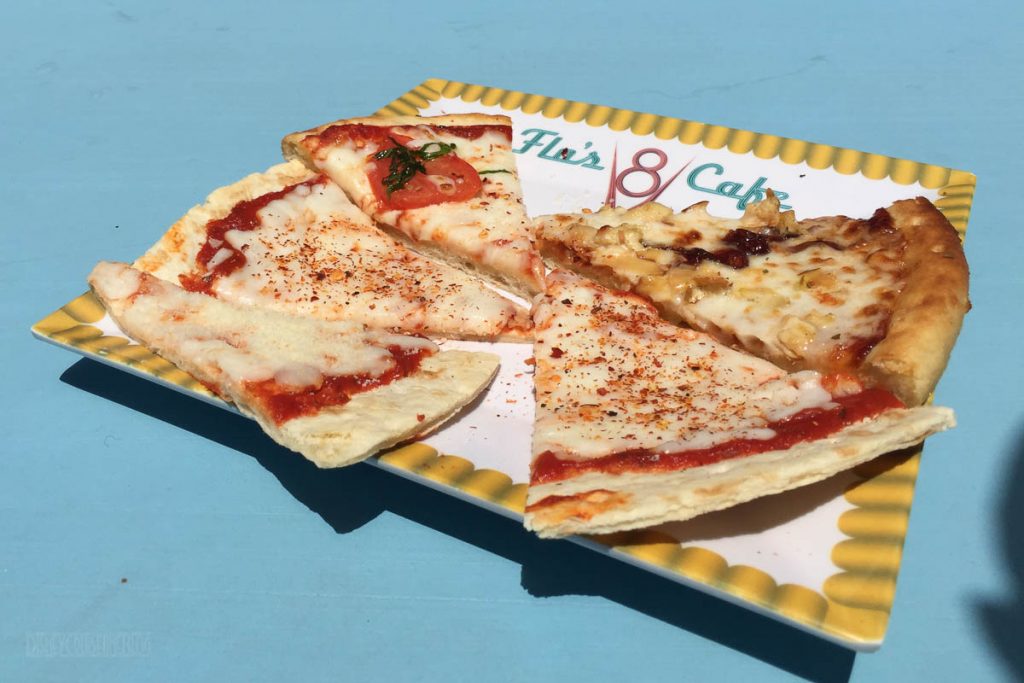 Just before the noon announcements, we encountered a bit of a squall, but as the great Captain Ron one said, they come on ya fast and they leave ya fast. Seemed a bit coincidental we encounter the storm just about the time when lightning bolts fly in Hercules. 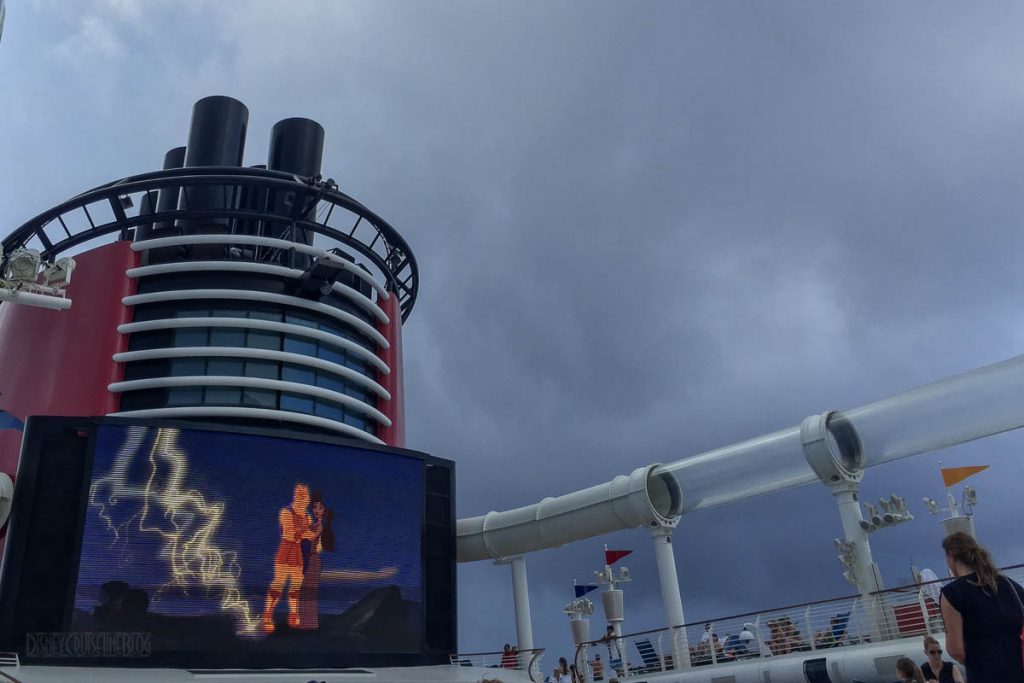 However, due to nearby lightning the pools and slides were closed for at least 45 minutes. Sure enough, the sun returned and the pools opened back up around 1-ish along with the start the third movie of the day, Tangled, which is a family favorite. In fact, Tangled to us is like how Frozen is to the masses. We love Tangled. 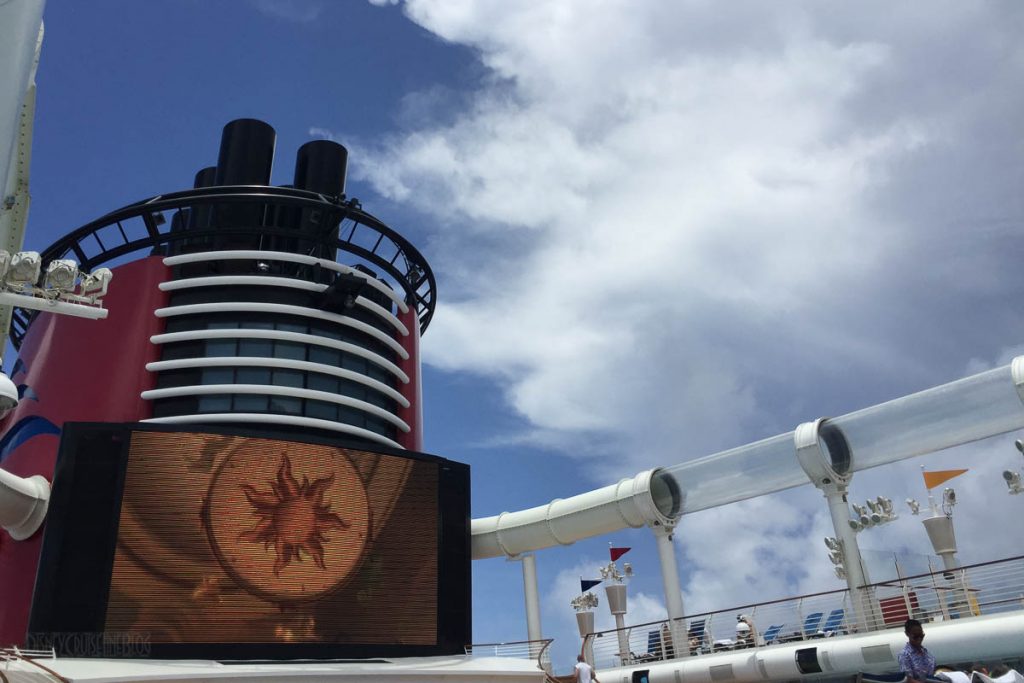 By the time Tangled finished, our chairs were no longer in the shade so we decide to head back to the stateroom. Isabelle wanted to check out the Oceaneer Lab’s Monsters Inc Open “Mike” Night before dinner which started at 4:30. 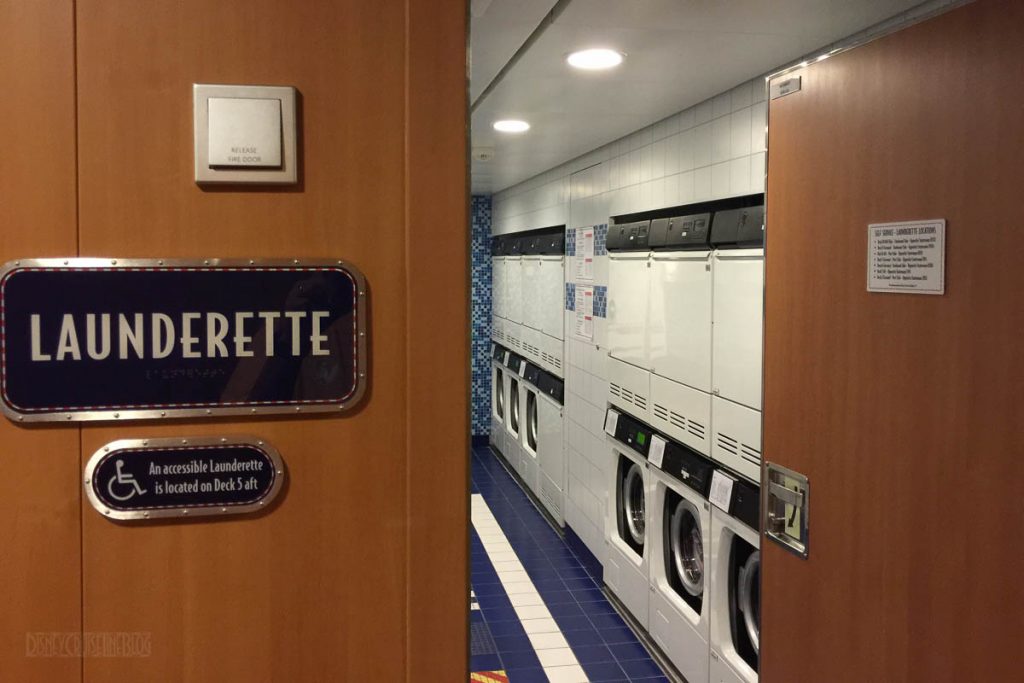 We filled our down time by taking showers, doing some laundry and watching Cool Runnings in the stateroom. Our Platinum Castaway Club gift was also delivered at this time. 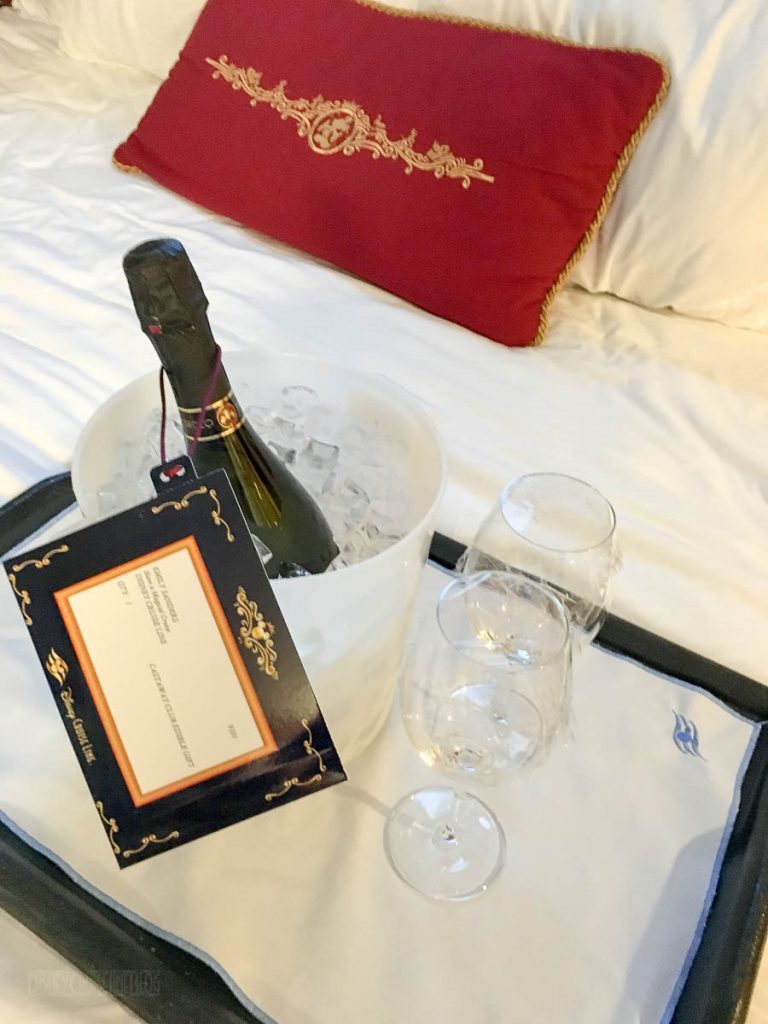 Tonight’s dinner was the Crush show in Animator’s Palate.

I had a great salad with chicken and walnuts with a cranberry dressing. 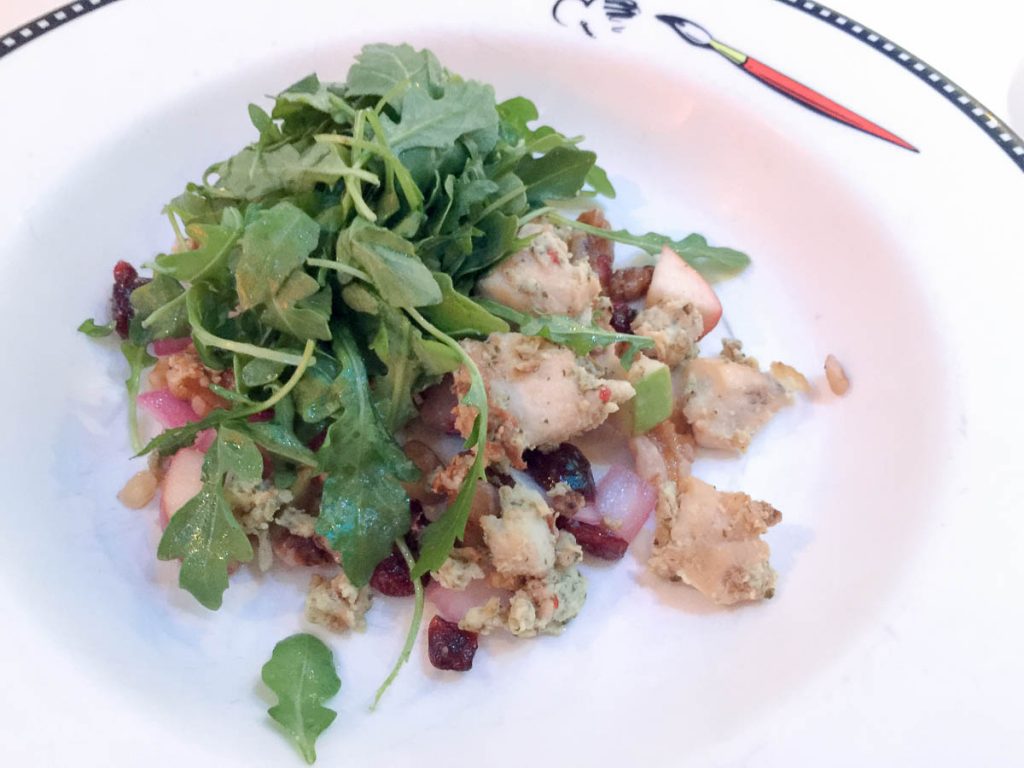 Emily ordered the black truffle pasta purseittes which she shared with Isabelle and Darko returned with another serving for us all to share. 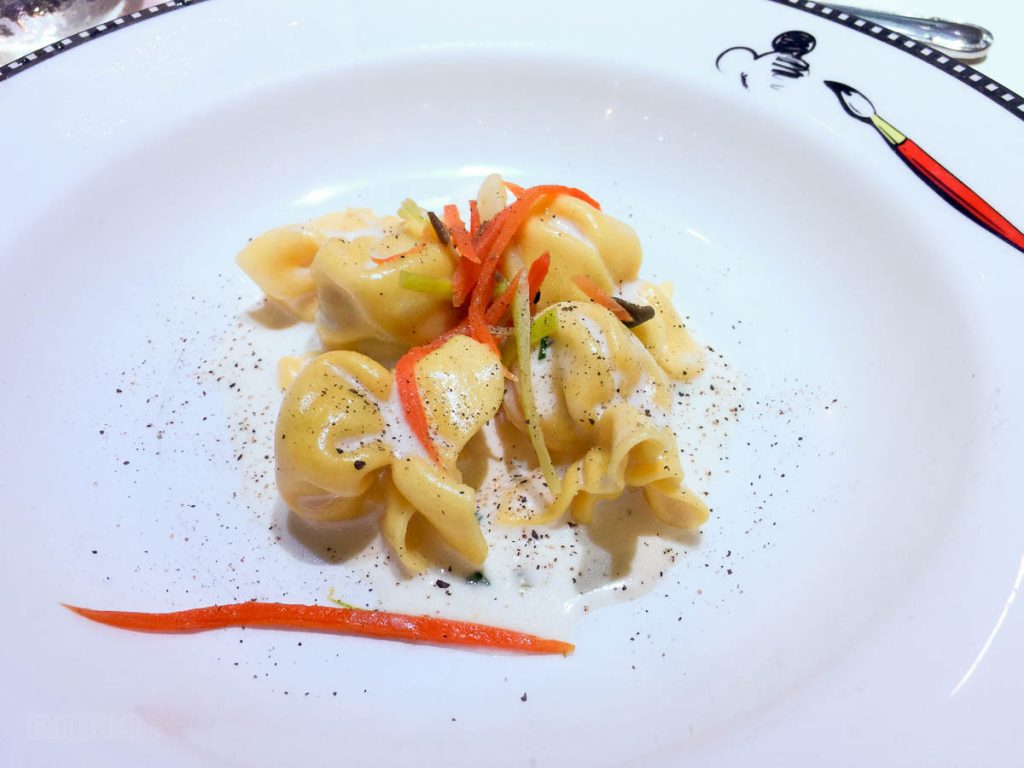 Isabelle and Emily both went the the vegetarian option, the Black Bean Chipotle Cakes. I had the Lemon-Thyme Marinated Chicken breast. 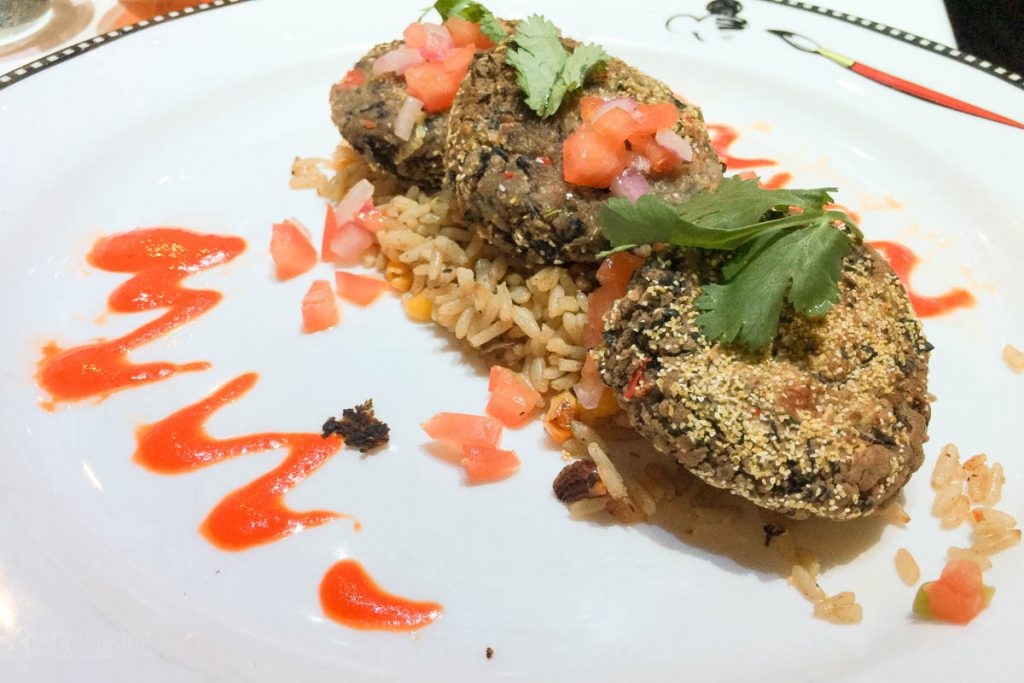 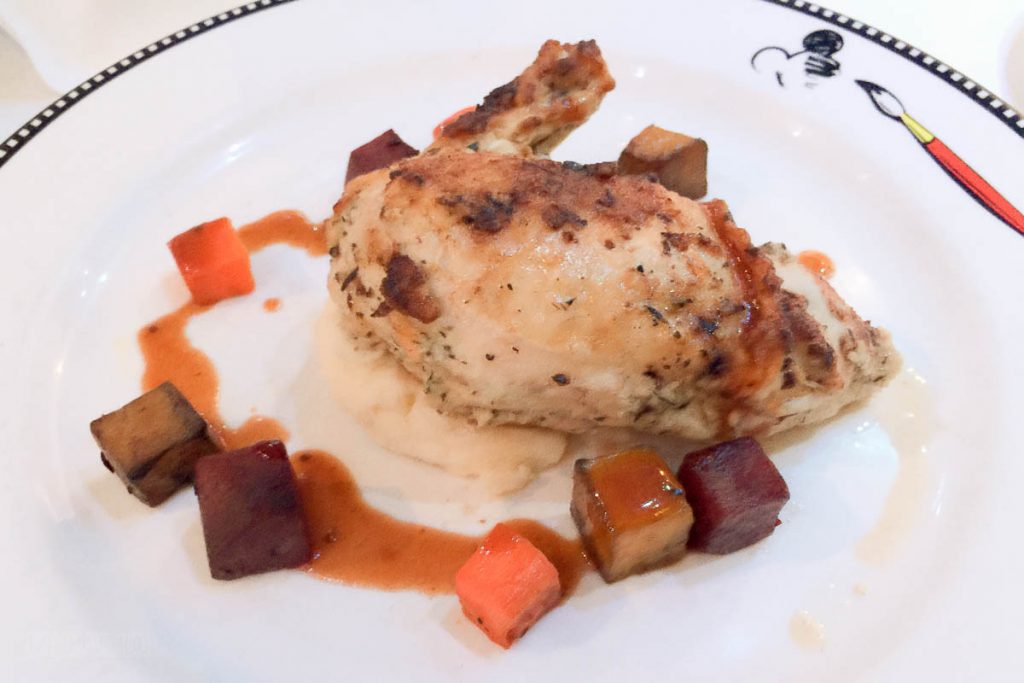 For dessert, we each ordered something different. Isabelle decided she just wanted some chocolate ice cream. 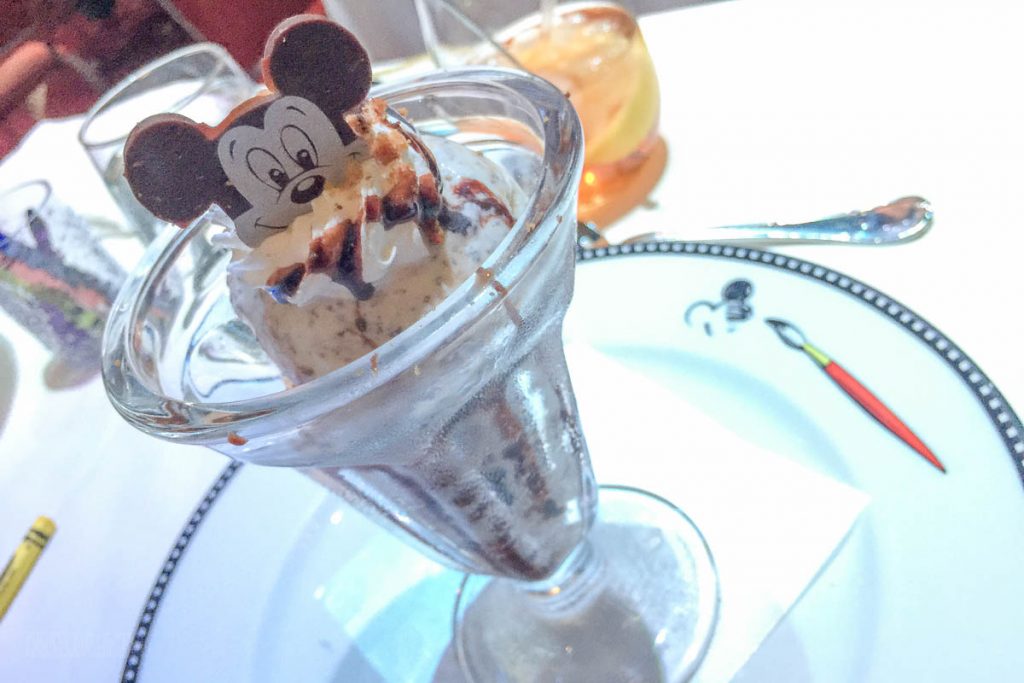 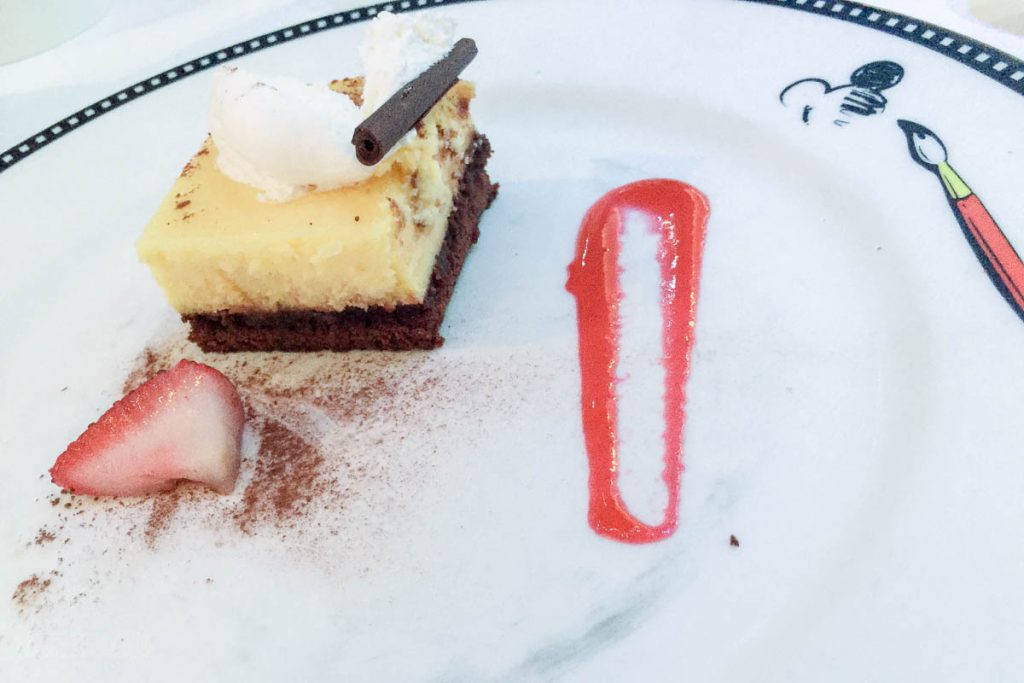 Em ordered the cookies n cream sundae and I went with the white chocolate fudge cheesecake. The rotational Animator’s Palate menu is not one of our favorites.

After dessert, we experienced the end of the Crush show.

Our big event for the evening was the magic workshop in the Tube with Magic Dave. This was a fun time. Magic Dave does a terrific job! 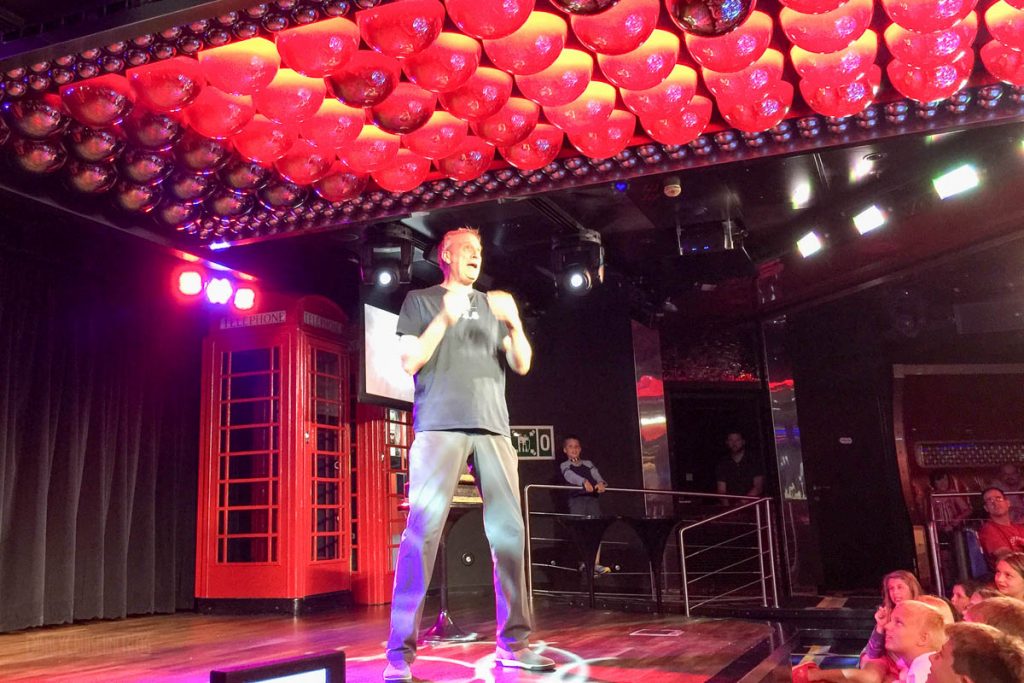 Tomorrow is our first port day and we have one of the first port adventure departures, so we called it a night and finished watching Cool Runnings in the stateroom. 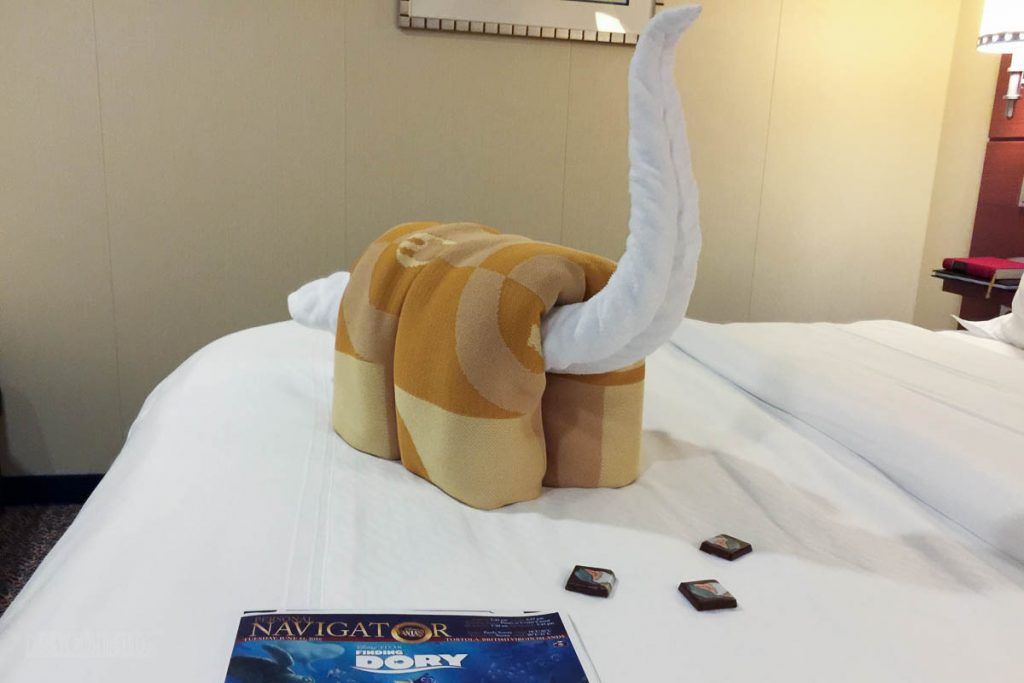