On Wednesday, the Disney Fantasy was the first cruise ship to arrive in St Thomas. We were on a tight schedule today, as we arranged our own group excursion to St John with a meeting time of 8:15 AM. This resulted in a early wakeup so we could go ashore soon after being cleared. Em got in some laps on deck 4 early and ran a few miles while watching the ship dock at daybreak. 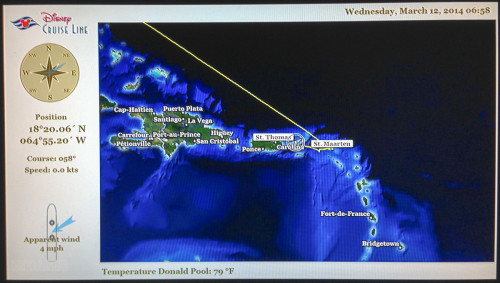 We were followed into St Thomas by the Norwegian Getaway. 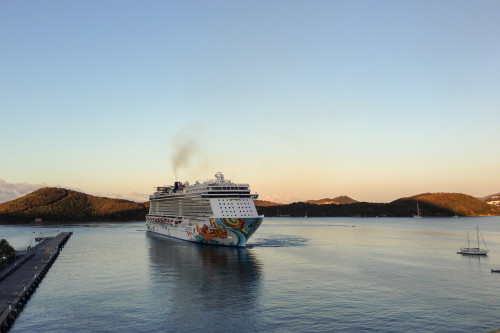 Once we had our bags packed, we hit up Cabanas for breakfast. I decided to fuel up with a protein-rich bagel omelet sandwich to get me through most of the day. 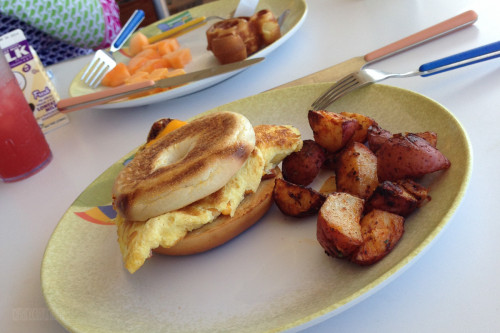 To get from Cabanas to the gangway quickly, we broke our self imposed no elevator rule (although this was only going down), but this resulted in the discovering of Wall-e and Eve in the deck 1 elevator shaft. 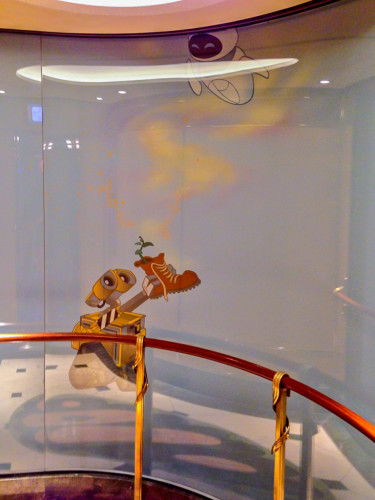 We met our driver from Islander Taxi, the same company we used last year for their island tour in St Thomas, just outside the port security gate and loaded in the open air shuttle for a 15 minute drive to the Red Hook ferry dock. 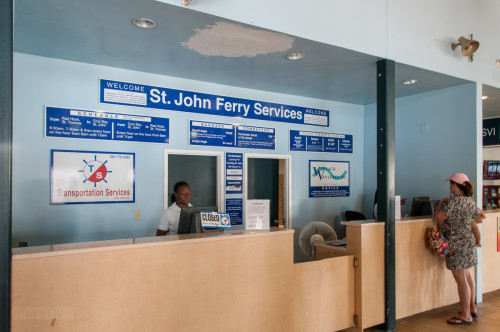 The ferry ride was another 15 minutes to St John where we then met our next arranged driver who transferred our group of 23 to Cinnamon Bay. 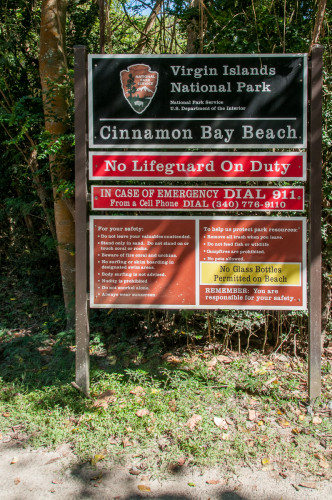 A considerable amount of St John is designated as a US National Park (2/3 to be exact), of which Cinnamon Bay Beach included in the area. 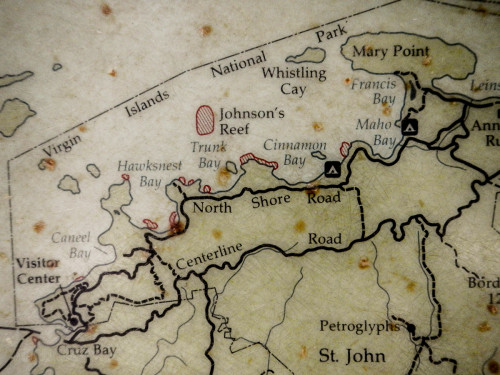 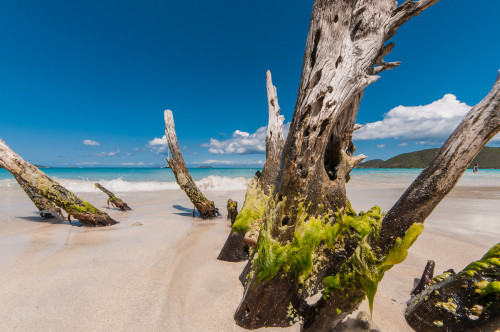 The beach was awesome and was much less crowded than last year at Trunk Bay. 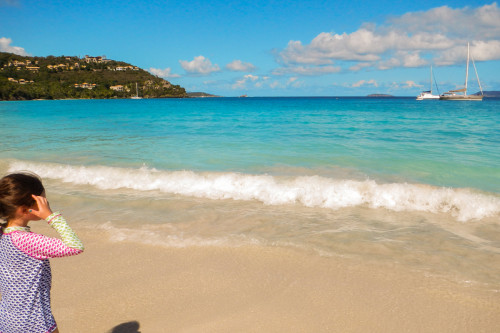 We did a little bit of snorkeling, but did not see as much as we did at Trunk Bay which has a dedicated snorkeling trail. 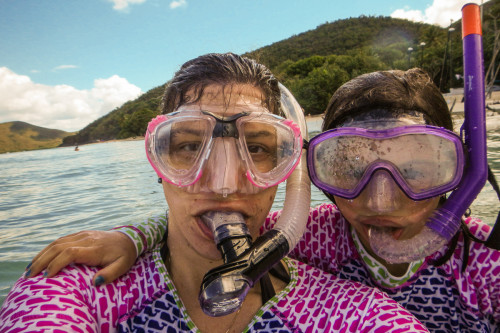 I’ve been to Walt Disney World one to many times because at one point, I was worried that we would encounter Pirates in the Caribbean, but it just turned out to be a local captain wandering by Cinnamon Bay on the way to Maho Bay. 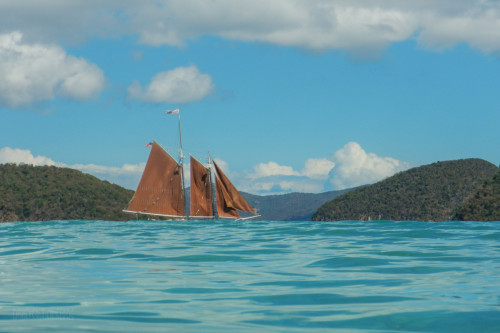 After a few hours (note: hours, because we arranged our own tour to St John, we had much more time to spend at the beach), we packed up and used the fresh water showers to clean up. While we were waiting for our group to congregate we met one of the campground’s permanent residents – rough life, right? Ev’rybody wants to be a cat! 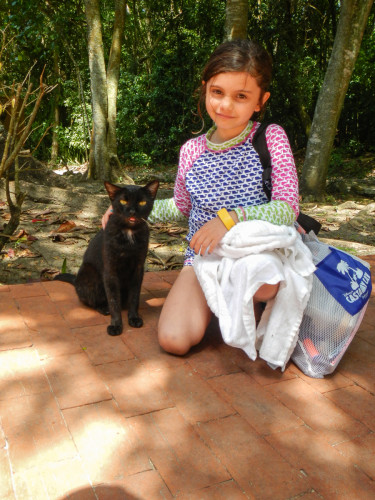 We loaded up and and took the short trip back to the ferry dock catching to 2 PM ferry from St John to Red Hook. Our driver back in St Thomas took us on a brief scenic tour through St Thomas before arriving back at Havensight. Once again, we were greeted by awaiting cold beverages! 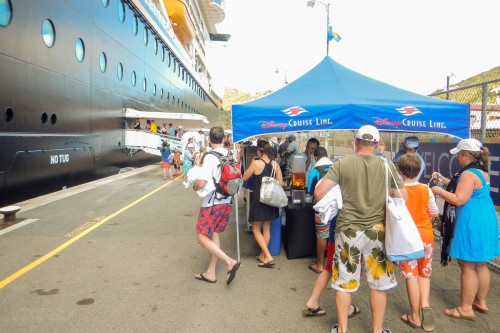 After boarding the Disney Fantasy, we dropped our bags off at the room and headed to the pool deck to grab a small snack to tide us over until dinner since we just had snacks instead of lunch in St John. Not to mention it was time to order the Paradise, the drink of the day! 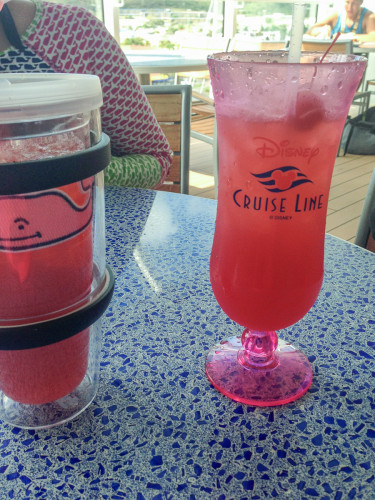 After the pool, it was time to go back to the stateroom to get cleaned up for dinner. We enjoyed the view of St Thomas as we sailed past the Carnival Glory. 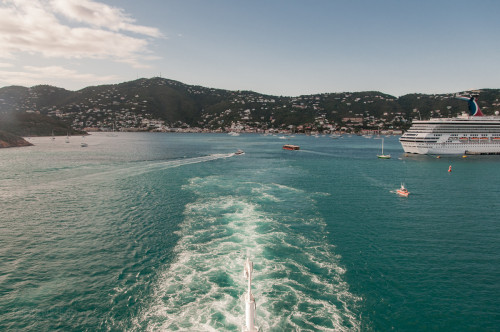 Who’s that? It’s the U.S. Coast Guard escorting the Disney Fantasy out of the harbor! 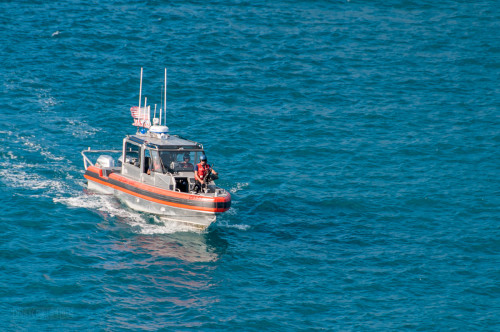 Tonight’s dinner was at Animator’s Palate with the always fun Animation Magic show. We got to try the new macaroni cheese and baked potato soup with a whopping 29 ingredients that replaced the buttered popcorn soup… Although, I enjoyed the hint of Tabasco Sauce, it did not win me over. I really missed the buttered popcorn soup which was themed much better to Animator’s Palate. 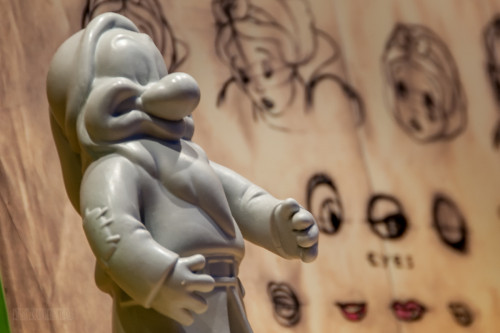 After dinner, Isabelle wanted to go back to the Oceaneer Lab so she could navigate the Disney Magic on the simulator and partake in the group activity she saw listed on the Personal Navigator (Day 5).

I began to work on the trip log when I noticed my internet usage meter was showing I had used ~940mb. Overnight, my usage jumped from 450 mb t0 750 mb, then it jumped again. Now, I’ve been monitoring my usage and after the second rather drastic jump, I decided to go see the dedicated Connect@Sea representative at Guest Services. I was skeptical that I had used that much, but did not rule it out either. I just wanted to inquire in order to prevent this amount of usage when the introductory pricing is no longer in effect. After a few minutes talking with the representative, it was determined there was a backend reporting issue that was easily resolved, and surprising I had used less data then I previously thought. I will go into a more detailed review of the new data plans once I get home, but for now I’d say keep an eye on your usage and if there is an unexplained jump, definitely inquire. 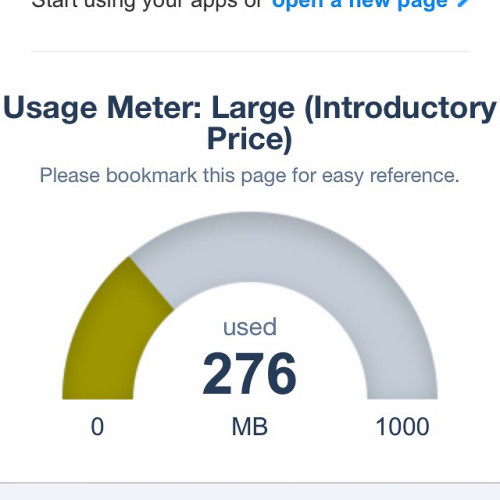 After back to back busy port days, we were all a bit tired and called it a night early.