The long awaited and speculated plans for the re-imagination of the Disney Wonder have finally been revealed by Disney Cruise Line. Following the fall Eastbound Panama Canal cruise, the Disney Wonder will set a course for Cadiz, Spain to undergo an overdue refurbishment along the line’s of the Disney Magic dry dock in 2013.

Disney is promising some exciting new entertainment and experiences for Disney Wonder guests after her transformed this fall. Headlining the enhancements are imaginative spaces for children, a jazzy Princess and the Frog inspired restaurant, Tiana’ Place, and an English pub.

Parrot Cay, one of the three rotational restaurants will be transformed into a New Orleans themed restaurant straight out of the Disney Animation film Princess and the Frog. 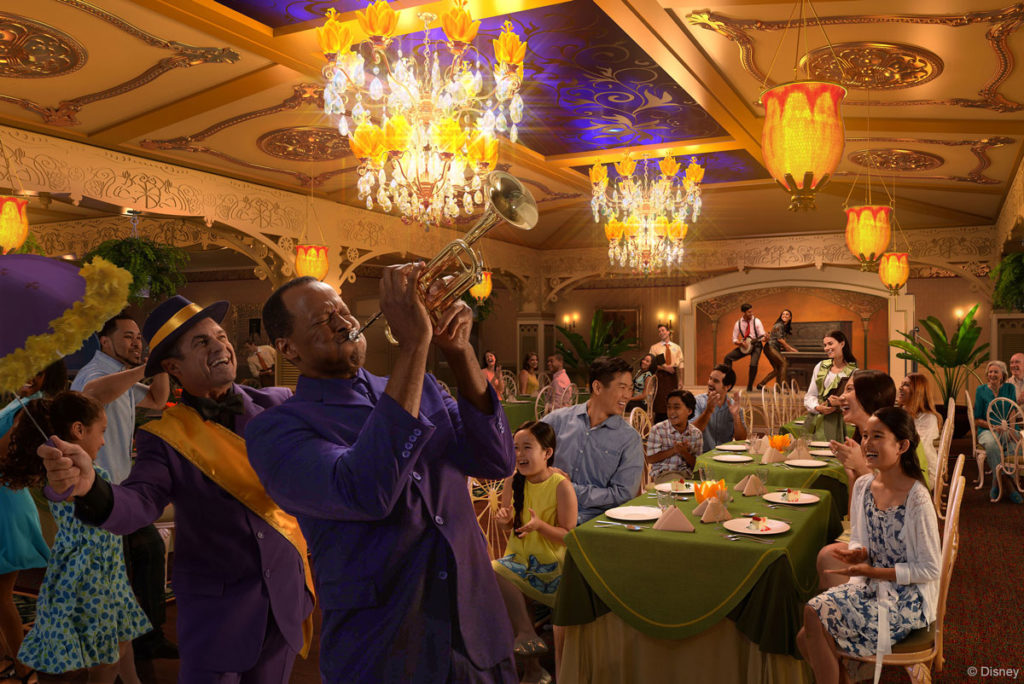 Exclusive to the Disney Wonder, Tiana’s Place restaurant will transport guests to an era of southern charm, spirited jazz and street party celebrations. With a menu influenced by southern-style cuisine, Tiana’s Place will provide food for the body and soul, showing that dreams and dishes come true.

Guests of Tiana’s Place, the restaurant inspired by Princess Tiana in the Disney animated feature, “The Princess and the Frog,” will be treated to a celebration of New Orleans dining and entertainment. Live music will be performed on the main stage, with rhythmic, toe-tapping notes of jazz, swing and blues setting the tone for the French Quarter supper club atmosphere.

Chefs will cook up Tiana’s recipes, drawing inspiration from the flavors and ingredients of the Louisiana bayou. Tiana’s personal touch will be evident in the menu, the entertainment and throughout every detail in the restaurant. From Tiana’s family photos to water lily-shaped candleholders to her framed culinary awards – all will help tell the timeless tale of Tiana’s journey from waitress to frog to princess to proud restaurant owner.

Animator’s Palate main dining restaurant will be updated to introduce the popular “Drawn to Magic” and “Animation Magic” dinner shows featured currently on the Disney Magic.

The adult only signature resturaunt, Palo, will be freshened up to continue providing an exclusive dining experience with a breathtaking view.  Palo will receive a makeover with Venetian-inspired decor.

Beach Blanket Buffet will be converted into Cabanas thus completing the unification of the fleet’s primary buffet restaurant.  The remodel will increase the usable space and provide additional indoor seating.

The Oceaneer Club open to children between the ages of 3 and 12 will be gutted to make room for a snowman, super heroes, larger than life toys, and a club fit for a Mouse! The Marvel Super Hero Academy will be the cornerstone of this addition for many young super heroes.

The Marvel universe comes to life in Marvel Super Hero Academy. In this space, young guests can train to develop the brave and adventurous heroes inside themselves. It’s an exciting addition to Disney’s Oceaneer Club, the engaging and interactive space just for children. 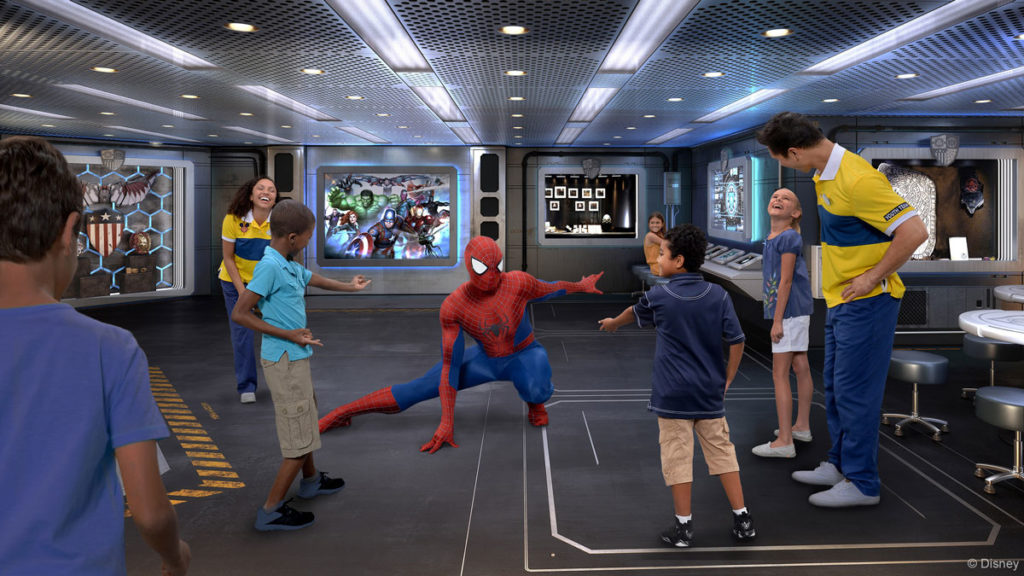 Exclusively on the Disney Wonder, Marvel Super Hero Academy will offer extraordinary adventures in which each young guest plays an integral role. With the mentorship of some of Marvel’s greatest Super Heroes, young trainees will learn the value of teamwork, bravery and problem solving through hands-on play and programs.

In one mission, Spider-Man will appear in person to help children hone their spider senses by perfecting their skills of reflex, speed and sharp minds. Children will work on their web-slinging and then get to see themselves in the headlines of the Daily Bugle.

The high-tech command post is also where other Marvel Super Heroes will interact with children via a large digital display, helping them unleash their inner heroes. In one program, kids can control the movement of a character on screen to practice super skills like repulsor blasting.

The other spaces within the Oceaneer Club will provide the perfect settings for children to meet their favorite characters, dance, play and just have fun with them

Flounder’s Reef Nursery will be revitalized and renamed into a whimsical space inspired by the ride, it’s a small world nursery. This change will bring unity across the fleet with the nursery naming.

Edge will also feature a makeover and potentially a relocation into the pool deck arcade as we recently saw on the Disney Magic. 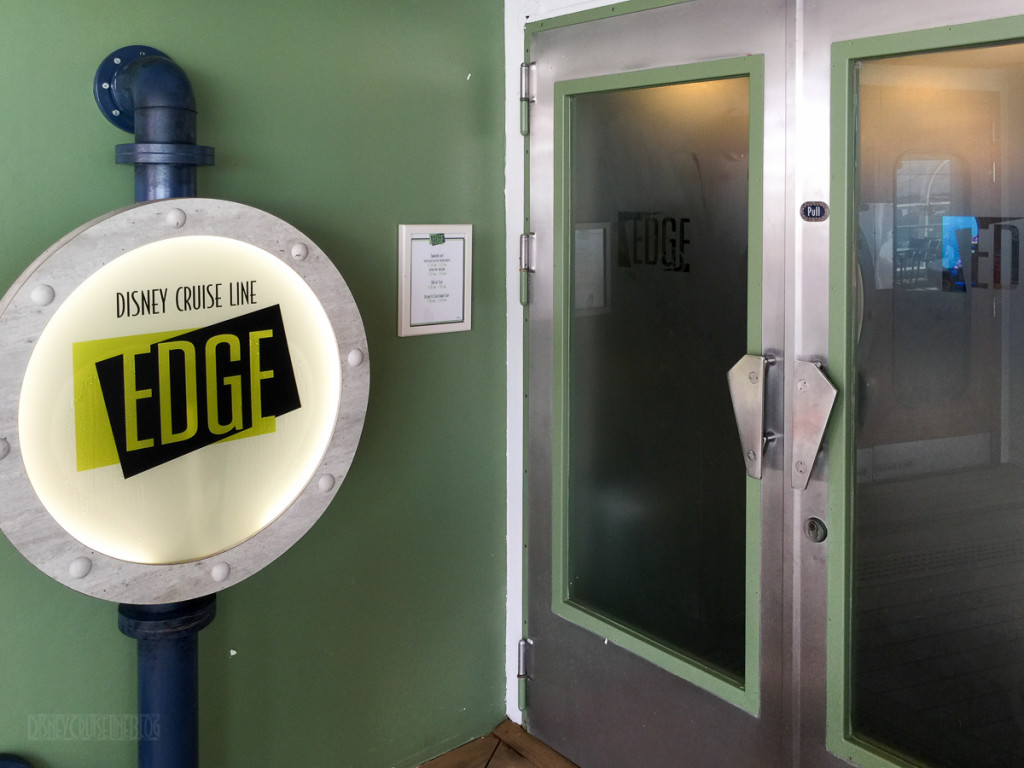 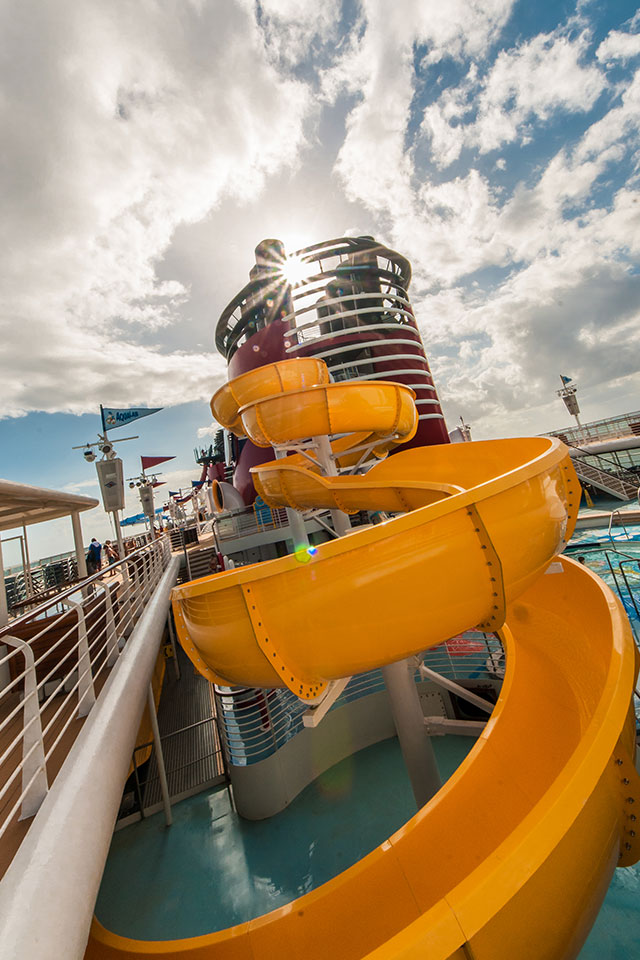 Route 66, the adult nighttime entertainment district which is the current area on deck 3 forward, will be re-themed to After Hours. All venues in After Hours intertwine, with each venue retaining its own totally unique look, sound and feel, providing you with a range of diverse options that play to all senses no matter what your mood. After Hours is the same name for the space over on the Disney Magic. We do not have a complete picture of what is planned for the space as there was no mention about the re-theming of WaveBands other than saying it will be a sophisticated nightclub for dancing the night away to pop-music hits both past and present. The Disney Wonder will get a shiny new Cadillac Lounge and an English tavern.

Diversions will transition into an English Pub. The new adult district pub will invite guests to take a jaunt to an authentic English tavern. Dark woods, plush leather furniture and brass accents are reminiscent of a friendly neighborhood pub. Of course, a selection of British and specialty beers create the perfect pub atmosphere, where adult guests can sip a pint or cocktail, or sample a brew made especially for the pub. 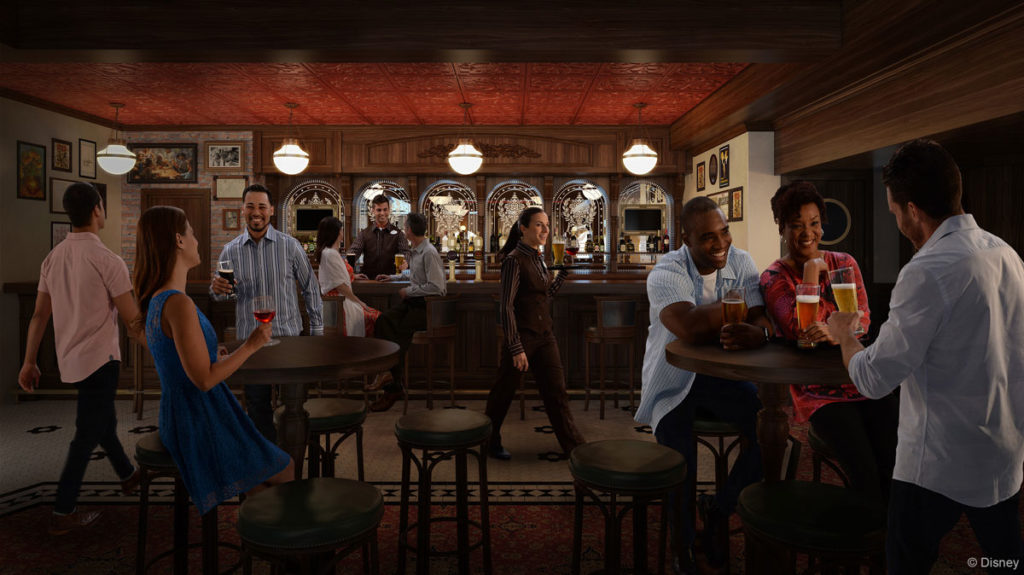 Observant guests may discover this is no ordinary pub. Subtle nods to classic Disney films set in London can be found in artwork, props and other bits ‘n bobs throughout the space. Brilliant stories of all sorts will be celebrated at the pub, whether those tales be true, tall or flat-out mad.

Below is a look (thanks to pictures from Heather Jarrett) a the current space, Route 66. 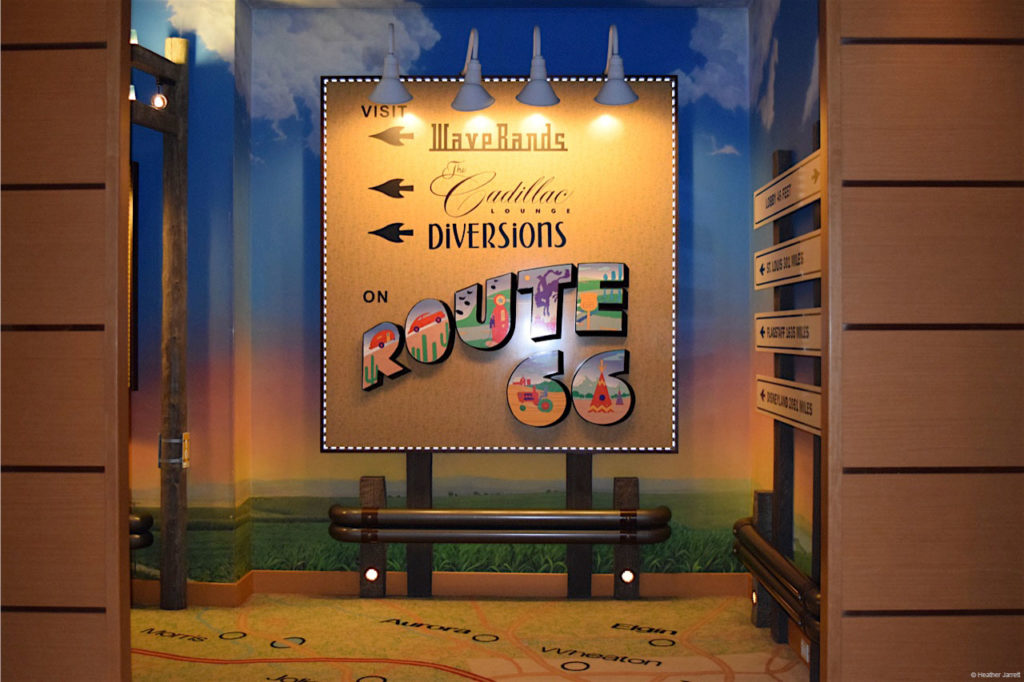 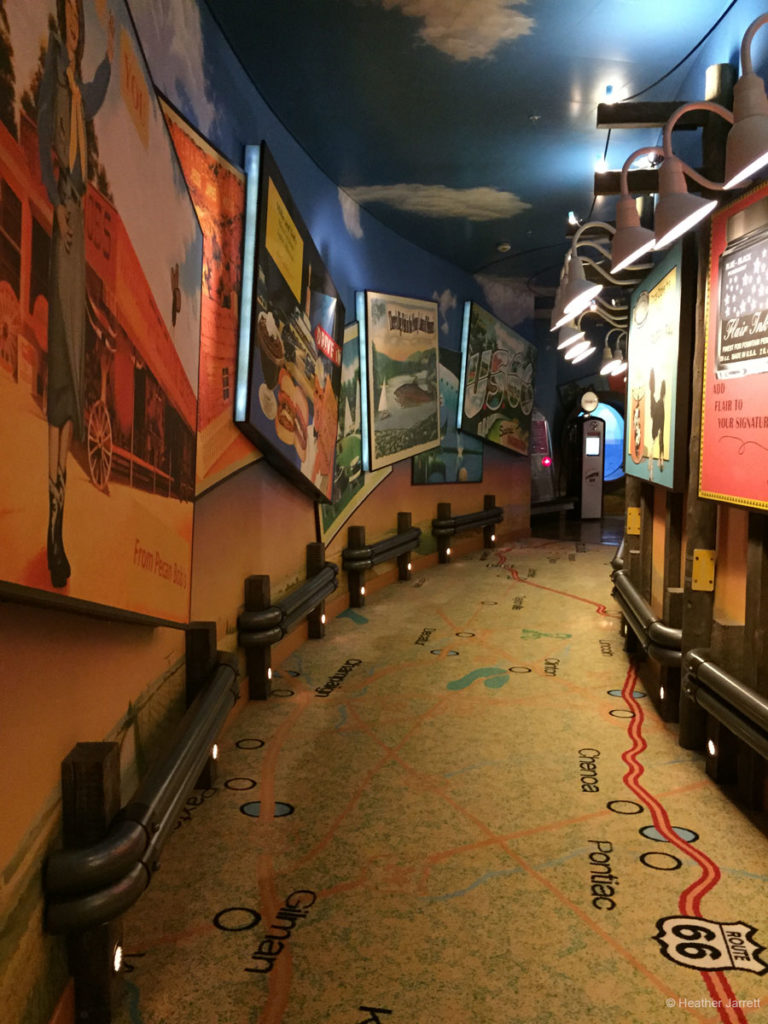 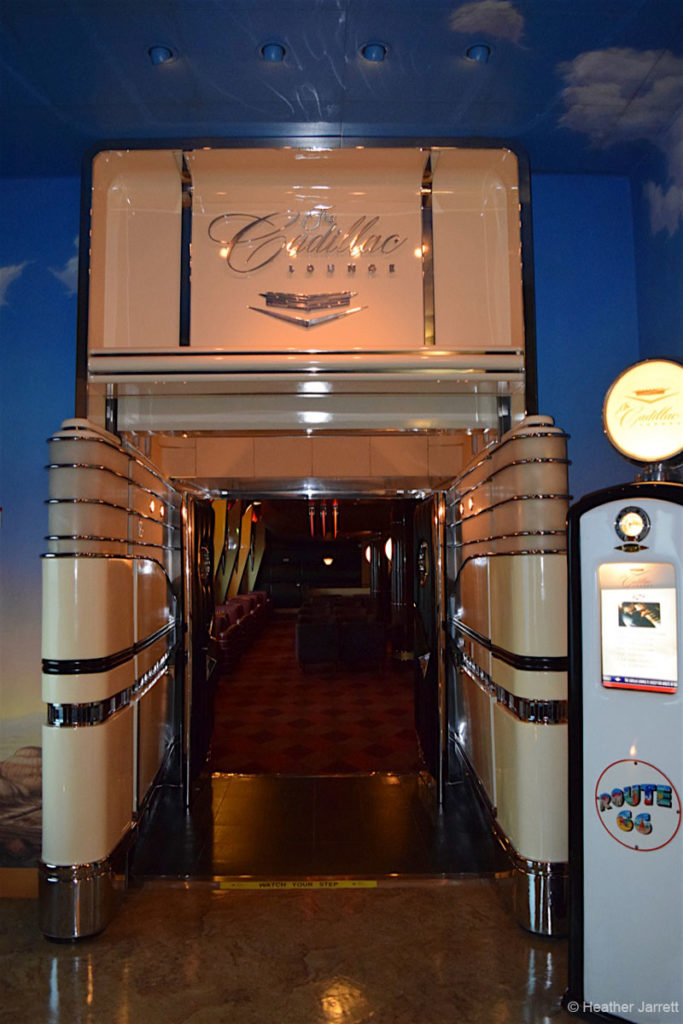 Vista Spa; welcome aboard Senses Spa & Salon. Get ready to enter the realm of relaxation in an revitalized spa area. The spa will be expanded and include the Chill Teen Spa. This blissful retreat will be a home to therapeutic and beautifying services for guests.

Stimulate your mind and body in a serene and pristine environment. Enjoy pampering treatment packages that deliver personalized care, from herbal wraps and botanical skin therapies to special massages that utilize ancient techniques. Sink into tranquility in a rainforest-themed aromatherapy steam room or an invigorating sauna, while fragrant vapors holistically elevate your soul. And enjoy private rejuvenation amid a sweeping ocean-view sanctuary inside luxury spa villas for individuals and couples.

Pair your inner glow with your outer beauty by discovering the benefits and convenience of Senses salon services, which include hairstyling, makeup and teeth-whitening, to name just a few. Gentlemen can even “clean up” with a stylish haircut and classic hot-towel shave.

And at Chill Spa located inside Senses Spa & Salon, teens can also feel relaxed and renewed with soothing services and treatments designed just for them. 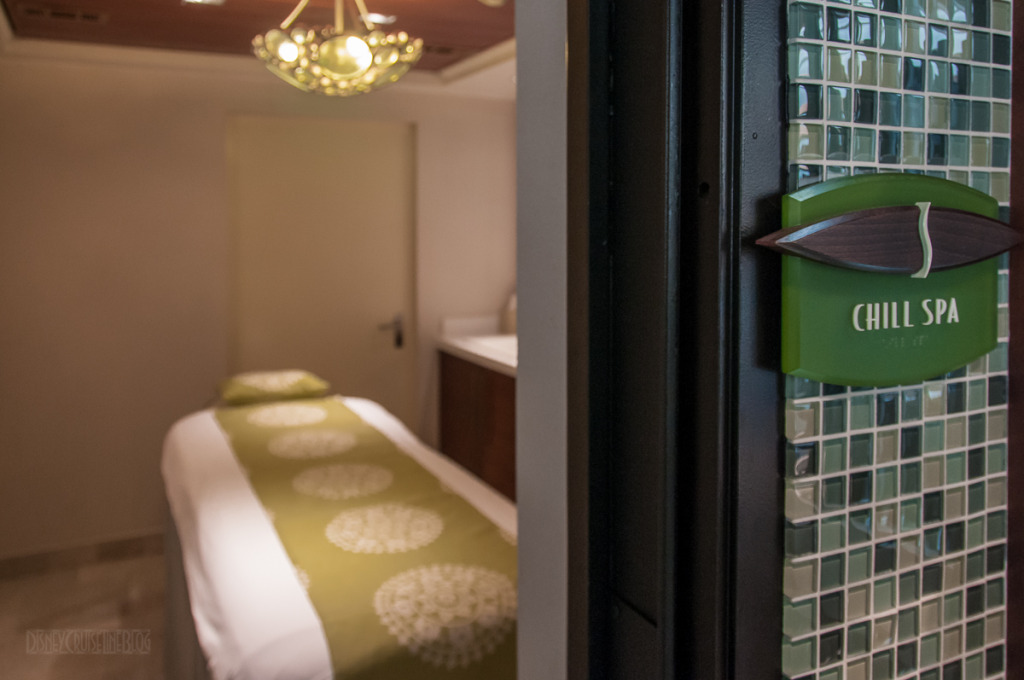 See ya later Studio Sea. Bringing the Wonder in line with her sisters, Studio Sea will emerge from dry dock as D-Lounge, a venue for family-friendly games, shows, dances and other various activities such as the Disney Vacation Club gatherings.

I am not sure where to put this so I’ll just include it here. Bibbidi Bobbidi Boutique will be added to provide makeovers for children. 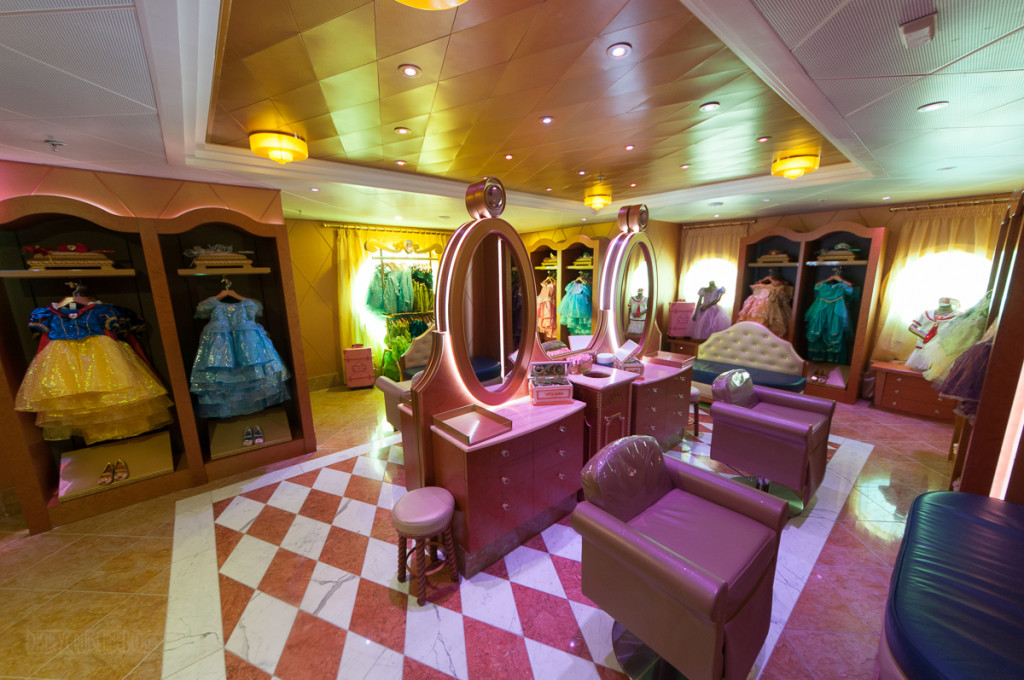 Clearly, Disney is holding back on some of the details and I give them a lot of credit for it. I think they learned a hard lesson with the Disney Magic’s re-imagination. They oversold the dry dock, promised a lot up front and had to scale back and still went over schedule. In contrast, consider how they handled the Disney Dream’s first dry dock. DCL put out some major changes and left a lot of surprises keeping guest expectations in check.

The biggest missing detail in my mind is the atrium. The Disney Wonder atrium was not specifically mentioned in today’s announcement. However, we suspect there will be a change similar to the Disney Magic, but only time will tell how much longer the second staircase and the wonderful Dale Chihuly chandelier have left on the Disney Wonder. 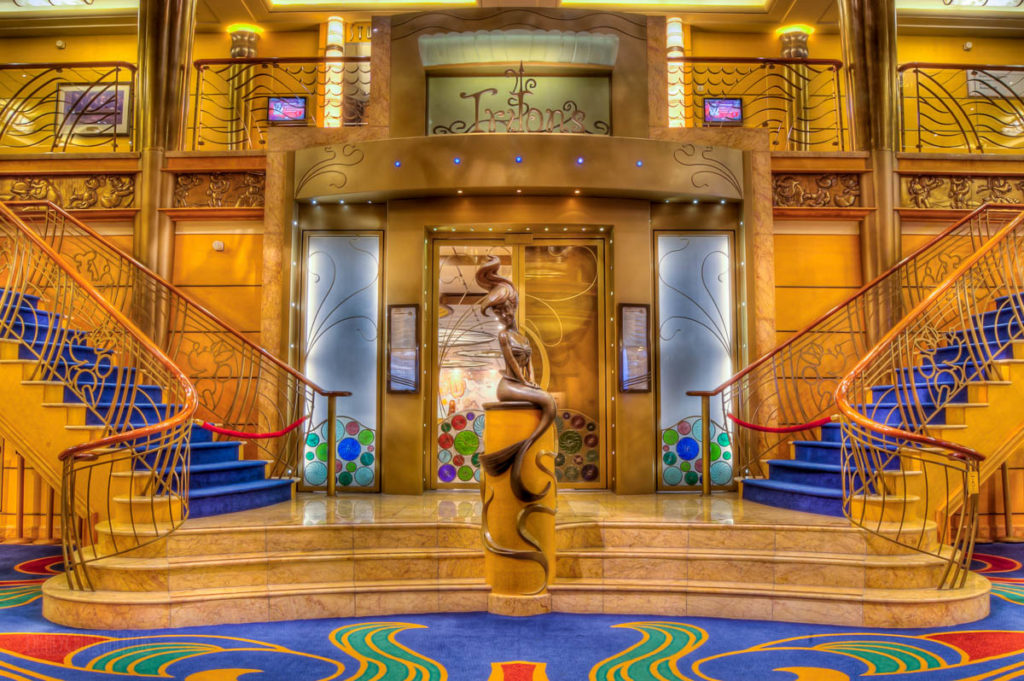 Interestingly enough, Disney Cruise Line is allotting a decent buffer for the Disney Wonder’s dry dock. We’ve had her penciled in for 62 days based on the itinerary gap. It is notable that he press release shows the dry dock will end on October 23rd leaving more than enough time to cross the Atlantic, make a stop in Port Canaveral (to install… cough.. Frozen) and get to Galveston for the first bookable post-dry dock cruise on November 10, 2016. The November 10th sailing, just happens to be a Very MerryTime Cruise.