Disney Cruise Line has posted casting calls for a new opening company aboard the Disney Wonder for what could potential be Frozen: The Musical (at Sea). The casting notice originally spotted by StitchKingdom.com is a little different from the usual listings. This one in particular specifically says newest onboard production and includes main Frozen characters, Elsa, Anna, Hans, Kristof and Olaf. While Anna, Elsa and Olaf have been integrated into shows already, the addition of Hans and Kristoff along with other language suggest the new production is Frozen centric. 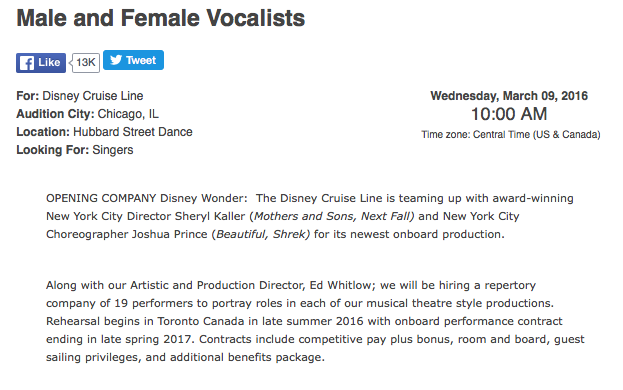 In the notice posted on Disney Official Audition website (pdf) states that Disney Cruise Line is teaming up with award-winning New York City Director Sheryl Kaller (Mothers and Sons, Next Fall) and New York City Choreographer Joshua Prince (Beautiful, Shrek) for its newest onboard production.  Along with our Artistic and Production Director, Ed Whitlow; Disney will be hiring a repertory company of 19 performers to portray roles in each of the onboard musical theatre style productions. Rehearsal will take place in Toronto, Canada in late summer 2016 with onboard performance contract ending in late spring 2017.

This leaves the following Frozen characters for what we expect to be Disney Cruise Line’s newest show Frozen: The Musical.

Elsa: Princess who becomes Queen; fearfully plagued by powers she hasn’t yet learned to control; lives a life of isolation separated from society and those she loves, including her sister.  Vocal Range: Mezzo Soprano; mix/belt

Kristoff: Ice harvester; rugged blue-collar type; a little rough around the edges, yet endearingly awkward; not your typical Disney hero; protector and loyal. 6’0” and above. Vocal Range: Baritone

Olaf: A skilled, sophisticated comic actor.  A snowman created by Elsa’s magic; kind-hearted with a childlike innocence and honesty that makes him say the painfully obvious with positive gusto; 100% honest, 100% sincere. Song & Dance man.  Vocal Range: Tenor; must have a high “A” full voice.