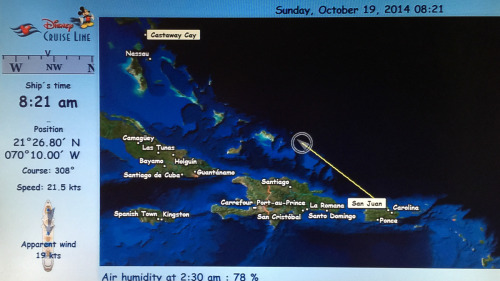 Our relaxing day at sea started with Emily hitting the gym. Isabelle and I slept much later than usual, but it was a nice treat from the early mornings we had been having as well as those we will be returning to in a few days. During breakfast at Cabanas, Isabelle and I worked on our napkin folding skills. My favorite has always been the candle. It is one I learned years ago on the Magic, but have seen used in the main dining rooms. 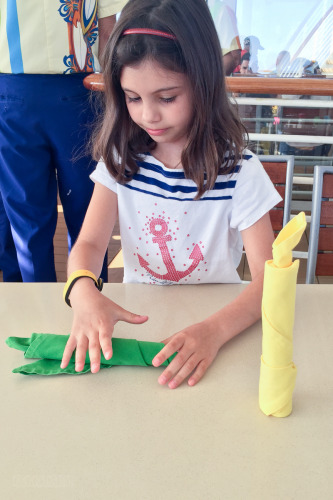 The plan for the day was stay away from the pool deck which turned out to be a good decision after seeing the crowd that had assembled by mid-morning. We headed over to Mickey’s MainSail for Isabelle to check out the two pin trading books at the register. The Halloween on the High Seas t-shirts were still in stock. It is hard to say if supply is up, or demand is down. I will say we have not noticed the mad rush to the halloween merchandise like we witnessed last week when the shelves were cleared in a few hours. 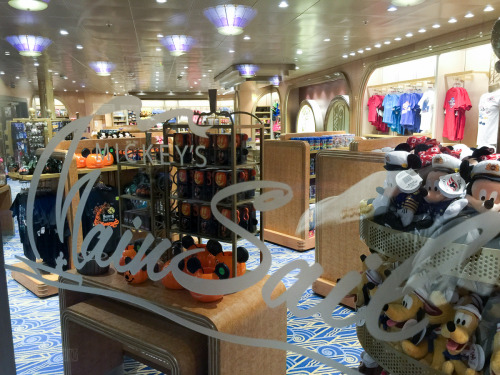 There are a handful of exclusive Disney Cruise Line iPhone cases available for the 4/4S and 5/5S models. 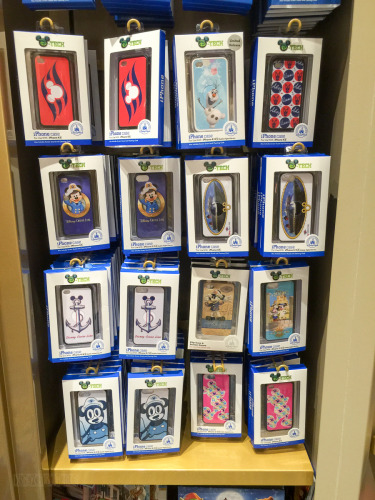 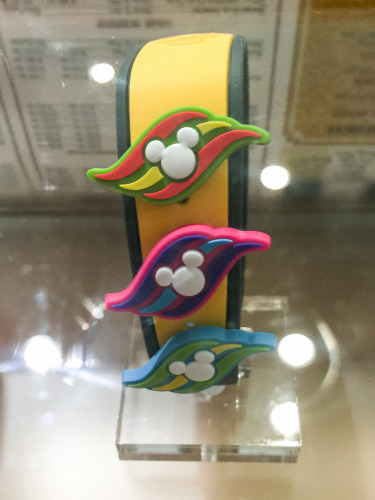 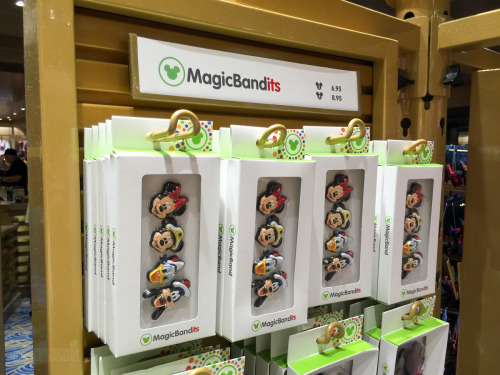 Soon after Isabelle finished pin trading we checked her into the Oceaneer Lab where she made Flubber while we enjoyed Palo Brunch. 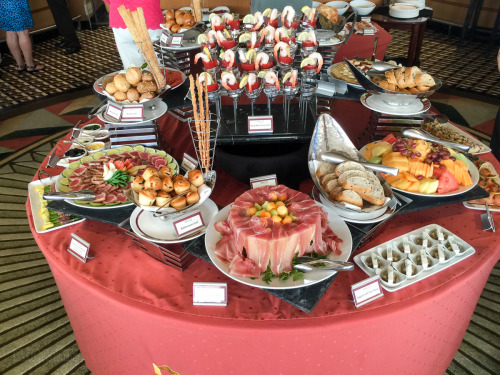 There were a few recently added items to brunch offerings including a Peach Almond Soufflé. I did not try it, but it looked promising.

After brunch we grabbed Isabelle a turkey panni from Daisy’s Delights, checked her out of the Oceaneer Lab and proceed to the Nightmare Before Christmas Sing & Scream in the Walt Disney Theatre. 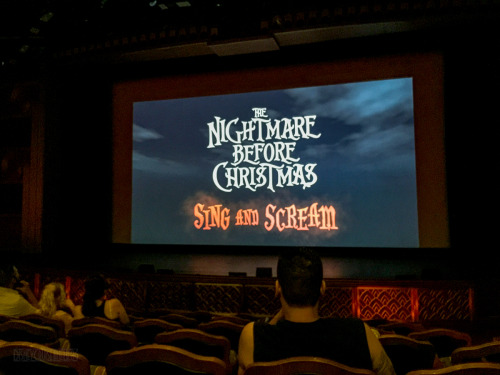 The show was quite enjoyable in 3D with the addition of theatrical lighting and various stage effect added for a 4D experience. Following the film, Jack and Sally appeared and held a meet and greet with guests outside the Walt Disney Theatre which allowed us to meed the couple for the first time. 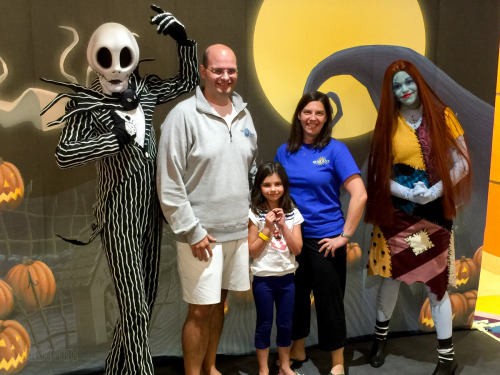 The afternoon was fairly wide open so we did a little trick or treating in the Atrium during Mickey’s Mouse-Querade Party. At this time of the day, the sun was at a great angle to allow for the pumpkins to cast a shadow on the floor almost lining up perfectly in he triangle. 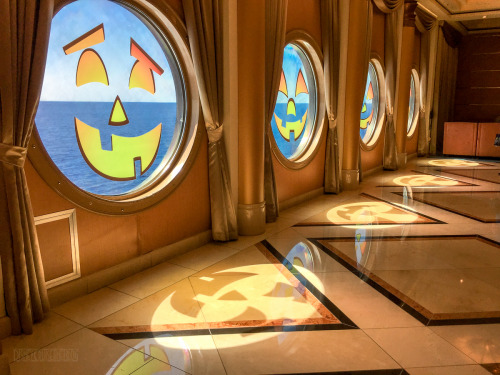 There was an open house in the Oceaneer Lab with Halloween paper crafts. Isabelle created a witch hat before we moved along to the ship simulators. I had a lot of fun, but I crashed the Fantasy while maneuvering in Nassau. Note to self, the simulators, even on the Captain level do not require you to back the ship into her berth. This could explain why I failed. I did however, take some lessons from Isabelle and successfully maneuver the Fantasy out of Nassau. If you are not familiar with the simulators, you can select your ship and either Castaway Cay, Port Canaveral or Nassau to sail from or dock. Additional vessels such as cargo ships are available, but I much rather stick with the cruise ships. By the way the Disney Magic is not updated in the simulator and looks identical to the Wonder. 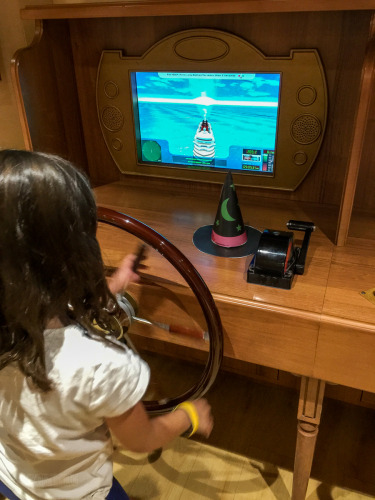 Open house was over, but Isabelle really wanted to stay and play with one of her new friends she has met over the course of both sailings. In fact, he has been our table mate for both sailings and beginning with turnaround day they have been almost inseparable.

So, we checked her back into the lab while we headed down to O’Gills to watch a few minutes of football and edit some photos for the trip log. 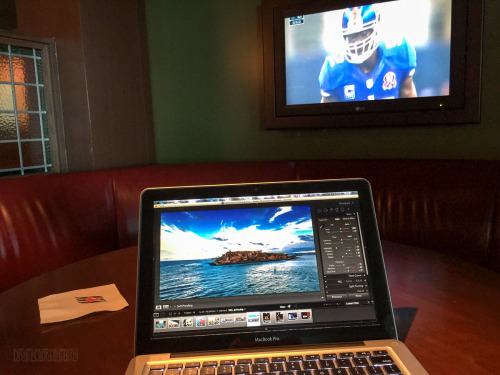 Dinner was in Lumiere’s but since we ate at Palo Brunch both Emily and I were not really that hungry for a full dinner. Emily just had a salad and baked potato while I ordered something I’ve never tried before… The chicken breast with mixed vegetables and a baked potato. Isabelle on the other hand enjoyed the Lobster Macaroni. 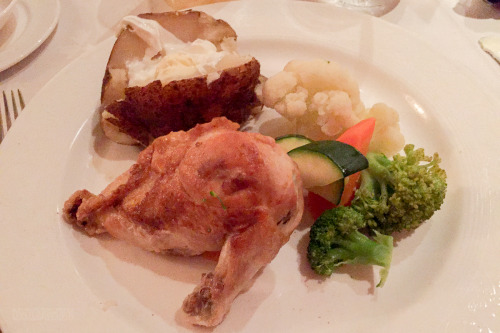 After dinner, Isabelle wanted to head back to the club to play with her friend before Villains Tonight! This left some time for us to stop into Keys for a drink and head to O’Gills for Villains Trivia. The trivia was much harder than we expected and included a question related to Who Framed Roger Rabbit and the point was driven home that this is a Disney movie so it counts. Well if we are now officially considering Touchstone Pictures movies with Walt Disney Pictures then it is time for Captain Ron to have meet and greets at at Serenity Bay on Castaway Cay!  Ok, enough of my rambling… moving on.

After Villains Tonight we called it a night and headed to bed.