Recent Disney Audition’s casting calls have been hinting at some changes planned for Disney’s Aladdin, A Musical Spectacular, one of three stage productions which debuted aboard the Disney Fantasy in 2012. The show was very similar to the production of the same name at the Hyperion Theatre at Disney’s California Adventure. Back in July, a casting notice went up for Male Vocalists for a renewed offering of Aladdin, A Musical Spectacular! for an eight month contract starting in late December 2018.

At the time, I simply tweeted the image below and wrote it off after thinking I was reading too much into the highlighted text, specifically the renewed offering part.

Fast forward to September 18th, Disney Auditions put up yet another casting call (below) for male and female vocalists for the lead roles of Aladdin and Jasmine. Once again, the notice mentioned this to is an unique opportunity to be part of a renewed offering of Aladdin, A Musical Spectacular!

Male and Female Vocalists for Aladdin and Jasmine

Aladdin: Principal role.  Male, plays 18 – 23, 5’9” – 6’, Must be a strong actor and singer.  Baritone/tenor, good physique, must be physically fit; good looking guy filled with youthful charm and appeal. There is more depth to him than people give him credit for. Portrays other roles in the repertory.

Candidates must prepare A Whole New World from the following link (starts on page 6):
A_WHOLE_NEW_WORLD

Jasmine:  Principal role.  Female, plays 18-23, 5’2”-5’6”, Must be a strong actor and singer.  Soprano with a strong mix, contemporary musical theatre sound.  Must be physically fit. Modern princess who knows her value and will fight to have her voice heard. Portrays other roles in the repertory.

Candidates must prepare To Be Free from the following link (starts on page 10):
TO_BE_FREE 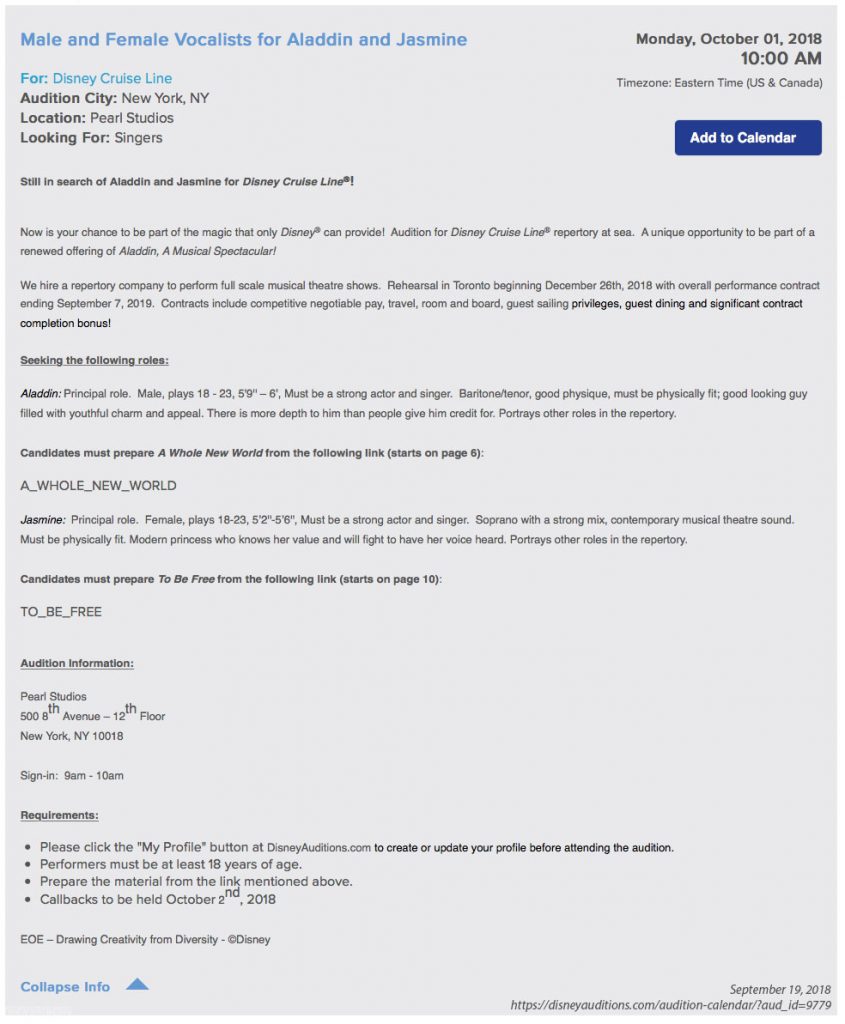 The new audition documents have a revised date of August 5 and September 5, 2018 and both offer dialog for the same two scenes for each role. Right off the bat, the script differs for when Aladdin and Jasmine first meet and he offers her the apple he stole. 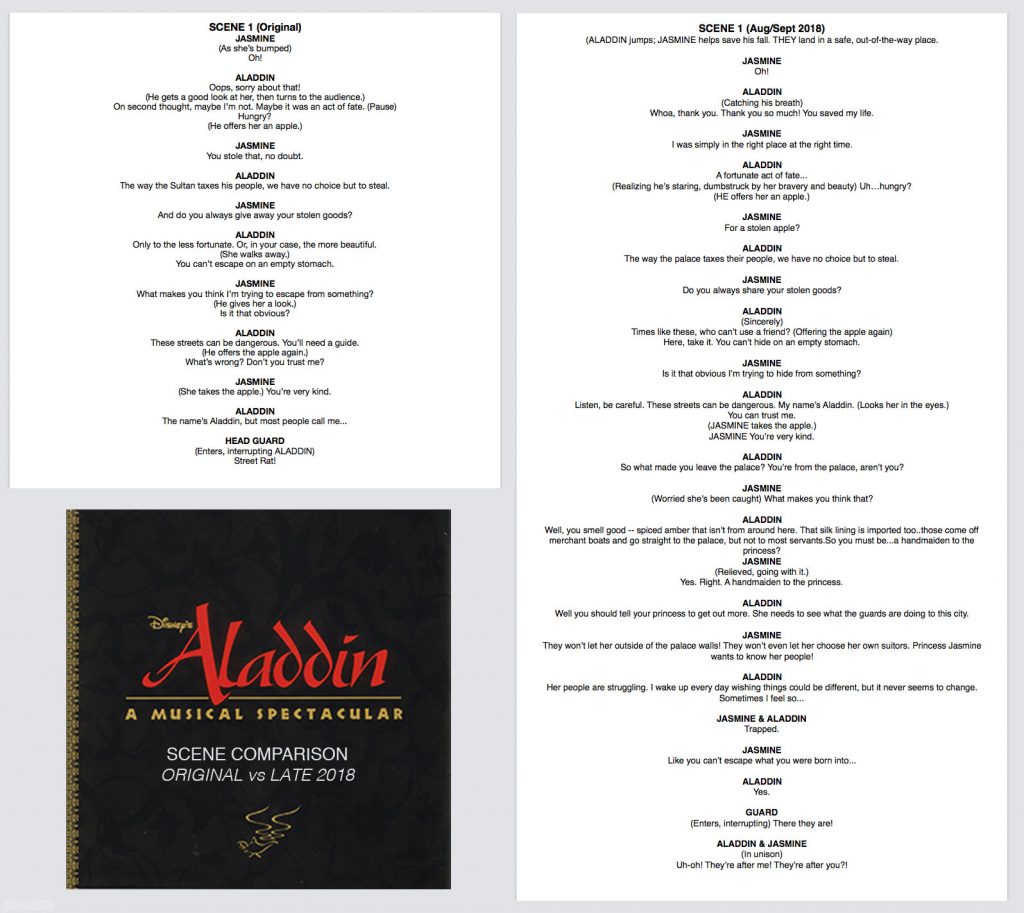 The other scene is an even bigger change starting with the location from Jasmine’s private quarters with a balcony to her private library with a balcony where she is looking at a map. According to the new script, books and maps is Jasmine’s way to see the world. The scene still ends up with Aladdin and Jasmine flying off on the Magic Carpet. 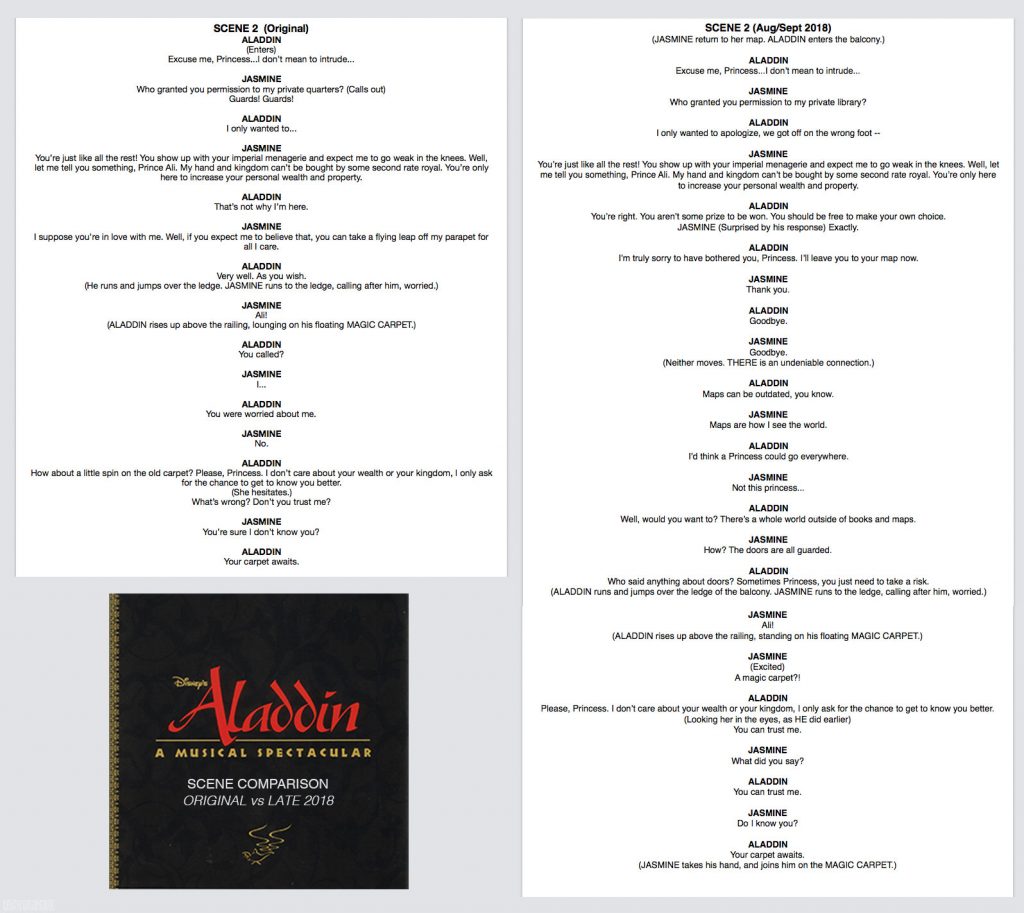 Please keep in mind this is all speculation on my part based on casting notices from Disney Auditions. Nothing is official until Disney makes an official announcement. The casting notice does note rehearsals are scheduled to begin in Toronto on December 26th, 2018 with overall performance contract ending September 7, 2019.

I’d love to hear what you think about the possibility of a renewed version of Disney’s Aladdin, A Musical Spectacular aboard the Disney Fantasy.

5 Replies to “Casting Notice Points to a Renewed Offering of Disney’s Aladdin, A Musical Spectacular!”