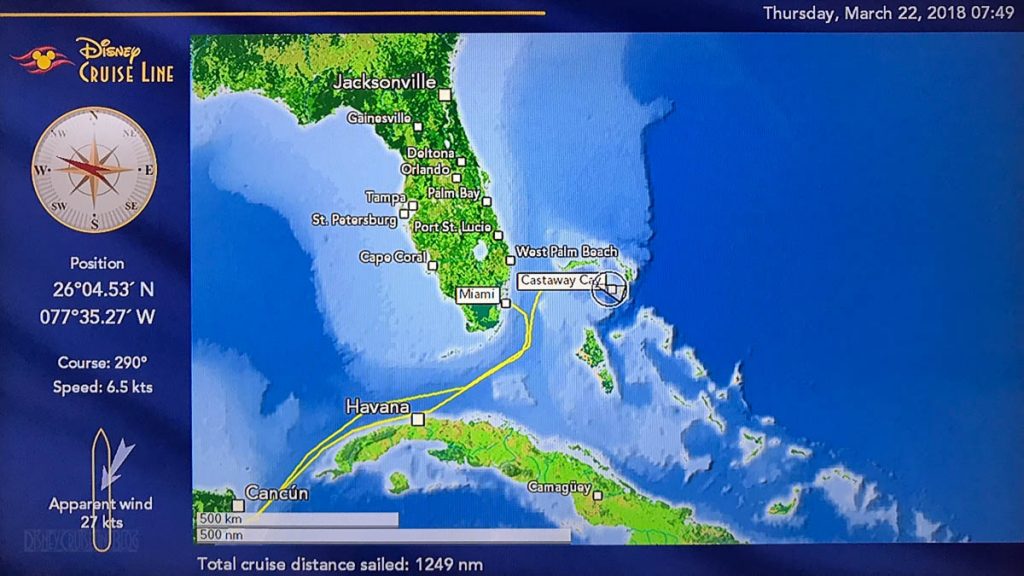 We woke up and headed to Cabanas for a quick breakfast and then prepared our day bags for our day on Castaway Cay. During breakfast, we were given a glimpse of things to come. Isabelle and Emily headed out to the aft deck in Cabanas, and the food blew off Isabelle’s plate due to the strong winds.

At this time we were lined up with the channel and attempting to dock, but after a bit me moved way from the island.

We remained optimistic, yet realistic, and checked in for the Castaway Cay 5k in Fathoms.

Checked in for the 5k, backup plan is deck 4. pic.twitter.com/ZAf3XPnBRa

Shorty after our cruise director, Leslie announced we’d be making another attempt at docking when conditions improved.

The cruise staff running the 5k instructed us to go have fun on the ship and return when we started to dock. We decided to go hang out on deck 4 and watch as we began to make another attempt to dock.

Isabelle and I started a game of shuffle board, an activity she continues to improve her skills and is making for some competitive non-scored games.

The second attempt to dock at Castaway Cay failed as the winds remained an issue.

2nd attempt to enter the channel failed. Subtle announcement just made that we are awaiting official word. pic.twitter.com/KRsj4BuiQa

At this point in the morning, we decided to bail on waiting for the 5k, as it was already getting late. Emily headed up to the gym to run the 5K on a treadmill as the forward portion of the deck 4 track was blocked off.

Isabelle & I headed to Promenade Lounge for a button making activity and a family feud game show. Following this, it was another learn to draw session, this time it was learning to draw Stitch.

We received a navigational update that we will try to dock for a 3rd time in about a hour around 11ish and that the 5k was moved to deck 4. Isabelle and I decided to forego the 5k on the deck. We later learned they gave out medals at the beginning to anyone who showed up, but where is the fun in getting a medal for nothing? Besides, we were having fun inside. An additional mini-navigator was distributed with a summary of the extra events to help pass the time on this unexpected morning at sea.

Emily finished her own version of the Castaway Cay 5k in the gym.

Emily's onboard Castaway Cay 5k from the gym pic.twitter.com/aTAgwo1EX1

She took a quick shower in the spa and we met back up to hit deck 10. We figured we might as well go up to the pool deck to enjoy the morning and the wonderful weather. It was no longer windy & was warm in the sun.

Making the most out of our magical morning at sea off the coast of Castaway Cay. pic.twitter.com/16autzVPO0

As I was walking around the upper deck, I noticed that the Duck-In Diner sign that was installed behind a support column was removed.

The third attempt to dock at Castaway Cay was underway and this time the winds died down enabling Captain Marco to safely maneuver into the channel and dock.

An announcement was made that the all ashore time would be 12:30 and that lunch would be served onboard. The line for pizza, shawarma, and Cabanas all looked like rope drop for Flight of Passage at Animal Kingdom. It was crazy, we opted for the shortest line, which was Daisy’s De-lites for sandwiches.

Emily headed up to the pool bar to order the drink of the day, the Stingray, which is $5 plus 75¢ auto gratuity and it was freshly made and tasted much better than what we believe is pre-mixed on the island.

I forget exactly when the Magic was cleared, but we headed out to the family beach around 12:45. The weather was beautiful, but chilly with the wind, and even more so when the clouds blocked the sun.

Isabelle braved the waters for the ropes course for a bit before seeking the warmth of a beach towel.

Conched Out Bar had a new to me drink that I was eager to try, the Pelican Mule. It was wonderfully citrusy.

The Pelican Mule was delicious pic.twitter.com/W5Vj4MgGiW

Isabelle was done with the beach and wanted to walk over and check out the hair braiding. In all her trips the the Caribbean and Castaway Cay, this is was her first time getting her hair wrapped. I would suggest setting a budget as this quickly became a $28 (+ gratuity) hair wrap.

We may have been late to the island, but it was a beautiful day. We had a great time. Additionally, the cooler weather was perfect for enjoying some of the other island activities.

Beautiful day – water was cold and the breeze made it chilly at times. Great time to check out the on island activities. pic.twitter.com/DSsz8rJ8rb

We returned to the ship where Isabelle showered and headed off to the EDGE for WALL-E and Friends Robot Building. She found it to be really fun. Emily and I took this opportunity to check out an area of the ship that is relatively unknown to us… the Quiet Cove. In the past, we’ve taken turns in the solace of the Quiet Cove, but today was one of the first times we had a block of time just to go and enjoy the quiet adult retreat. It’s fantastic, but the concierge lounge just taunts you as you sit back and relax in the hot tub. It is sorta like the Top of the World bar at Bay Lake Tower at Walt Disney World. You can see that it is empty and crew members are standing by, but it is reserved for concierge guests just as Top of the World is limited to DVC members.

We cleaned up and packed about 95% of our stuff. We were meeting Isabelle at dinner and we had some time to spare. We saw an interesting option on the Promenade Lounge menu earlier in the cruise and decided to give it a shot.

A pre-dinner Porthole with @BlantonsBourbon and a splash of @rekorderlig – wonderful flavor and a great deal for 2 people pic.twitter.com/gl7ERTc2Xh

The Porthole is your choice of rum, bourbon or aromatic bitters that is poured into to a Porthole Infuser by Crutial Detail with strawberries, oranges, limes, and Filthy Black Cherries which are more or less a budget version of Luxardo Cherries.

The liquor in our case was Blanton’s Bourbon, along with bitters which was poured ever so carefully into the Porthole and left to sit for a bit. The infused bourbon is then split between two glasses and topped with Rekorderlig Strawberry-Lime Hard cider. This is almost like an experience for 3 as you get the remaining bottle of the cider. We found the Porthole to be a great value and even with a short infusion the bourbon had a great flavor. I think next time, I may order this ahead of time and ask them to hold it behind the bar for an hour or so for a longer infusion.

Our final dinner was back in Rapunzel’s Royal Palace for the ’Til We Meet Again menu.

‘Til We Meet Again dinner pic.twitter.com/fkUvHImydc

After dinner, Isabelle headed to the Oceaneer Lab to make bracelets and we returned to Keys. Emily wanted a glass of the Lasseter Rosé and I took my chances with a red from the sommelier bin again. Although I saved a few bucks, I received a Pinot Noir which isn’t really a red I’d normally order.

I mentioned that in our previous trip to Keys the music was at a much better volume. Well, tonight it was back to what I recall previously with the pianists mic cranked up to where it was hard to hear over his signing. If you are going there to listen to the music then I am sure it is fine, but this is a much better venue when the piano and pianist’s microphone is set at a much lower volume.

Isabelle met up with us in O’Gills, where Emily & I were doing 90s music trivia. We had a respectable score, but it was not enough. Four teams had perfect scores which lead to a tiebreaker. It never ceases to amaze me how humbling onboard trivia can be. You go in thinking you got this and leave asking yourself, what just happened? Regardless, it is always a lot of fun and the cruise staff do a great job. Matt from the United Kingdom was great the entire cruise.

90s music trivia in O’Gills – ended with 4 teams tied with perfect scores – went to a tie breaker, first to shout out the song. pic.twitter.com/JqjsNGzgxV

We headed back to the stateroom & finished packing so that we could set our bags out and then finished watching The Winter Soldier. One thing about the stateroom on demand on the Magic is that there didn’t seem to be a way to resume on demand content from where you left off. We may have missed it, but each time we went back to resume, it started from the beginning.

Day 6 Debarkation in Miami
Debarkation day was here. As usual, we skipped our morning breakfast seating in favor of Cabanas. The interesting thing in Miami is that once the ship is cleared, they begin calling guests to disembark based on their luggage tags.

While it was somewhat annoying having to wait until our luggage group was called, it resulted in quick departure from the ship and ended up being a quicker process than the free-for-all at Port Canaveral. It didn’t take much time to find and retrieve our luggage and go through customs once we checked off of the ship. We were in the parking lot and on the road in no time. One last bit of advice. If you are parking in the surface lot make sure you have a card that doesn’t have a problem scanning. The two cards I tried resulted in read errors. Thankfully, Emily’s card worked on the first try. Also, parking at PortMiami is now $22 a day.

Debarkation @PortMiami has improved since our last sailing from here in 2013. Already to the car and now waiting to pay to get out of the lot. pic.twitter.com/leUDZyUZMo

Thank you all for following along with our live trip logs in the new format. I realize some of you were unable to see the embedded tweets due network restrictions at work, but frankly, it freed me up to enjoy the cruise. We have much more to share from this cruise, so keep an eye out for more on the dry dock changes, Rapunzel’s Royal Table, and Marvel Day at Sea.