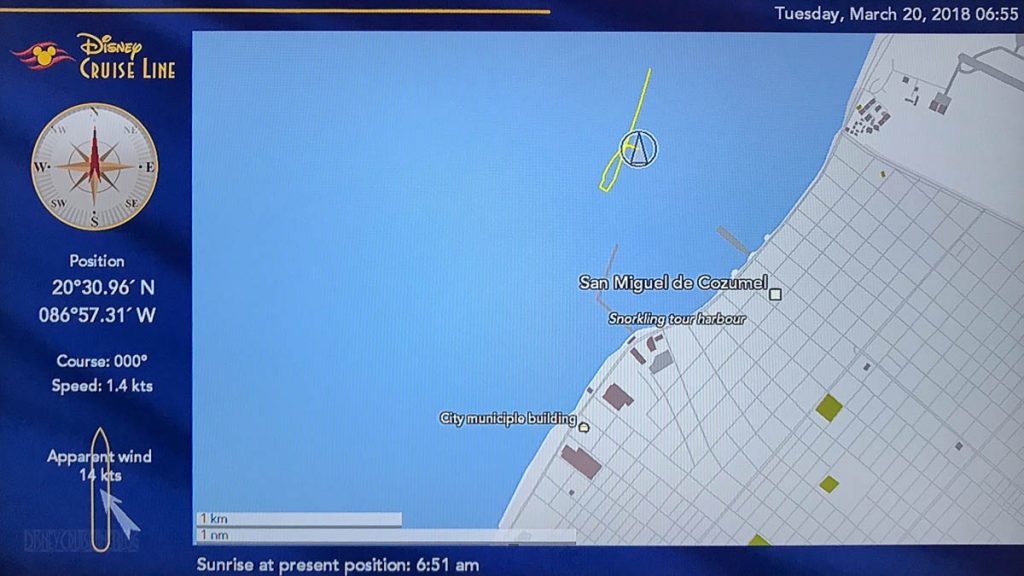 Dawn comes early on a ship when you are committed to working out. Today, it was around 6 AM as our family run on deck 4 started before the sun was up. I’m happy to report I set a personal record this morning with an incredible pace. It was nothing short of magical… Ok, I lost track of how may times Emily passed me, but running with GPS and the Nike app on a moving ship is the way to set some personal records and make yourself feel like you accomplished something amazing.

When you do an outdoor run on a moving ship, you can get some great times. (I knew this would happen – I did it purposely) – some great views at sunrise of the other ships arriving. pic.twitter.com/WOSO7JWmG0

This morning were were heading out on a Port Adventure, the Fury Catamaran Sail, Snorkel, and Beach Party. This is not a Marvel themed excursion run by Nick Fury, although that would be epic. The catamaran picked us up on the pier and took us down the shore to a snorkeling spot. It is set up to drop everyone off in the water and let the current take you along the shoreline with the catamaran occasionally adjusting its position to allow for any guest to boarding they desired.

It was a beautiful day in Cozumel pic.twitter.com/7lDyamXn2c

We were given 40 minutes of snorkeling time based on when the first snorkeler hit the water. By my clock, we were called back after 30 minutes which given the forgettable snorkeling area was more than enough time to see a few fish. If you are a seasoned snorkeler looking for some great sights, skip this as it is not that exciting in terms of reef.

Once everyone was back on board, we moved down the shore to their beach area which features inflatable slides, trampolines, and obstacle courses floating offshore. Up on the beach they offer free margaritas, beer, soda, and water. Food was available. A hot dog lunch was $8 and a hamburger with sides was $10. We opted to skip the American fare lunch in hopes of getting some tacos near the port.

Had a great morning playing in the Cozumel waters the water play area was a blast. pic.twitter.com/gcwdsG2L7u

By the time we returned, it was closing in on 1pm, and we were starving. As much as we wanted to head back out for lunch, we decided to get lunch on deck and spend the afternoon poolside. I am impressed; a lot of passengers went ashore today as the pool deck was wide open for the majority of the afternoon. Thankfully, Cabanas offered a taco and fajita bar.

Make your own tacos and fajitas in Cabanas. pic.twitter.com/XKEHGsS995

After an early and active morning along with some early afternoon pool time, we spent the rest of the afternoon relaxing.

Isabelle hung out at EDGE for a bit before we regrouped and made our way to Lumiere’s for dinner. Tonight was pirate night, but since we are getting the Marvel Day at Sea menu tomorrow, we had the standard menu tonight. Isabelle decided to try the French Onion Soup for the first time, but it wasn’t her cup of tea.

Lumiere’s regular menu for pirate night since we get the Marvel menu tomorrow. pic.twitter.com/yJfyhZNb6E

After dinner we split up again. Isabelle headed to the Oceaneer Club for a Dr Strange activity which she left because it wasn’t really what she was expecting. It was a virtual activity on the big screen, not an actual character driven experience.

Emily and I headed to After Hours to see what we could discover in Keys sommelier bin. Once again, we were shocked to learn that they only had one wine in the bin, which was a red; no whites or sparklings. Our amazing server Tim from the Philippians, shared with us that not many people are ordering champagne. I ordered the red, which is normally $19.75/glass.

🎹 sommelier bin for the win – enjoyable music this evening at a pleasant volume and Tim has been providing excellent service pic.twitter.com/5RzBiZXeYF

My overall opinion of Keys has changed. I found the music this cruise to be enjoyable and at a nice volume to allow for conversation. The service was excellent, our server, Tim, delivered our drinks to the table on a cart, decanted the wine and prepared Emily’s drink Coco Royale which was quite enjoyable. Having them finish the drinks off tableside is a nice touch. We also got some great tips on the ports for our next cruise!

We met up with Isabelle in the Walt Disney Theatre for Jonathan Burns’ comedy and contortionist show. We really enjoyed the show and it was nice to see a new to us guest act.

Isabelle planned to return to the Oceaneer Club for Thor Becoming Worthy, but decided to just head back to the stateroom and call it a night. After all, we lose an hour tonight…….

Goodnight – we lose an hour tonight and tomorrow is #MarvelDayAtSea pic.twitter.com/CwVsRHXfD4