Finally, after over a year of secret planning, we were finally able to reveal our big surprise to Isabelle – a Marvel Day at Sea, spring break cruise that also includes a birthday at sea. Yesterday, we took Isabelle to Morimoto Asia, per her request, for an early birthday lunch. We presented her with a card and a small wrapped item; our door magnet for this cruise.

Following lunch,  we headed home to pack because to pull off this surprise there was no way we could keep this secret if I retrieved the suitcases from the attic. After a rather quick packing spree and a good night sleep,  we left Orlando and headed south to PortMiami to board the Disney Magic.

It’s a MARVELous day to be in Miami pic.twitter.com/xVoktHHVRk

The drive from Orlando is really easy on the Florida Turnpike; however, this morning the fog was bad with periods where I could barely see a car length ahead. The fog burned off and we arrived in Miami where we decided to park in one of the port’s parking lots across from the terminal. I made a mistake and turned in one lot early, but the walk wasn’t that bad. It is important to note, as of December 1, 2017, parking at PortMiami is $22 per day – as of this morning, DCL’s website has outdated pricing information, but they did cover themselves with the “subject to change” statement. Regardless, this is where we planned on parking as it involved zero pre-planing. Just show up and park.

Arriving at the terminal a little before 10:30, we dropped off our luggage and made our way into the terminal. First stop, the security line which was efficient and staffed with friendly staff. Check-in was also a breeze. From our prior experience departing form this port, it is improved drastically and more resembles the well—oiled machine that is Port Canaveral.

The Disney Magic is fresh off her 2018 dry dock, so we will get to experience all the updates and dine a Rapunzel’s Royal Table over the next five nights! The last time were sailed from Miami was also on the Magic following her re-imagination in 2013;  my how far we have come from that experience.

Boarding began around 11:45 and we entered the ship on deck 4 and welcomed aboard outside the D-Lounge. As we walked back towards the aft stairs, we passed through Shutters which is now sharing space with a new shop, The Crown Jewelry. Later in the evening when it opened, we discovered this area is being run by a third party. I guess you can look at this area as and expanded area dedicated to trunk show jewelry.

The Crown Jewlery, the new shop on the Magic sharing space with Shutters pic.twitter.com/obLRYKukUm

We made our way up to Cabanas for our embarkation lunch out on the aft deck overlooking the beautiful Miami waterfront.

Fueled up, we set off to see some of the updates such as Vibe, the Rainforest Room in Senses, The Cove Cafe, and Signals bar.

The Rainforest room has been updated to match the Disney Wonder which was recently upgraded to a Dream class-like Rainforest room during her recent re-imagination. The gym also received new equipment. 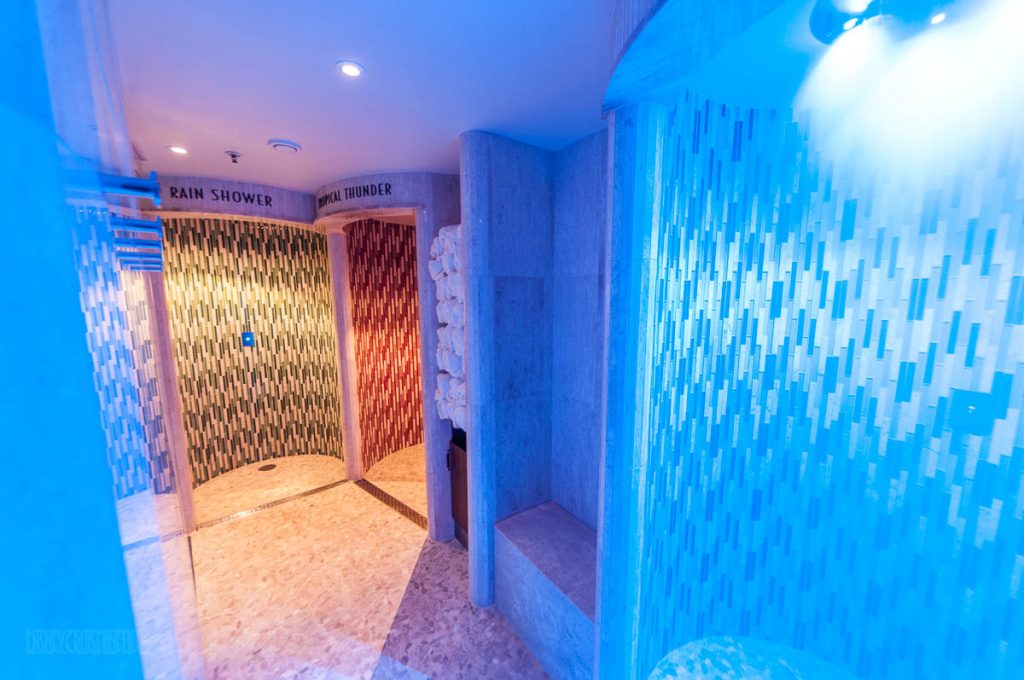 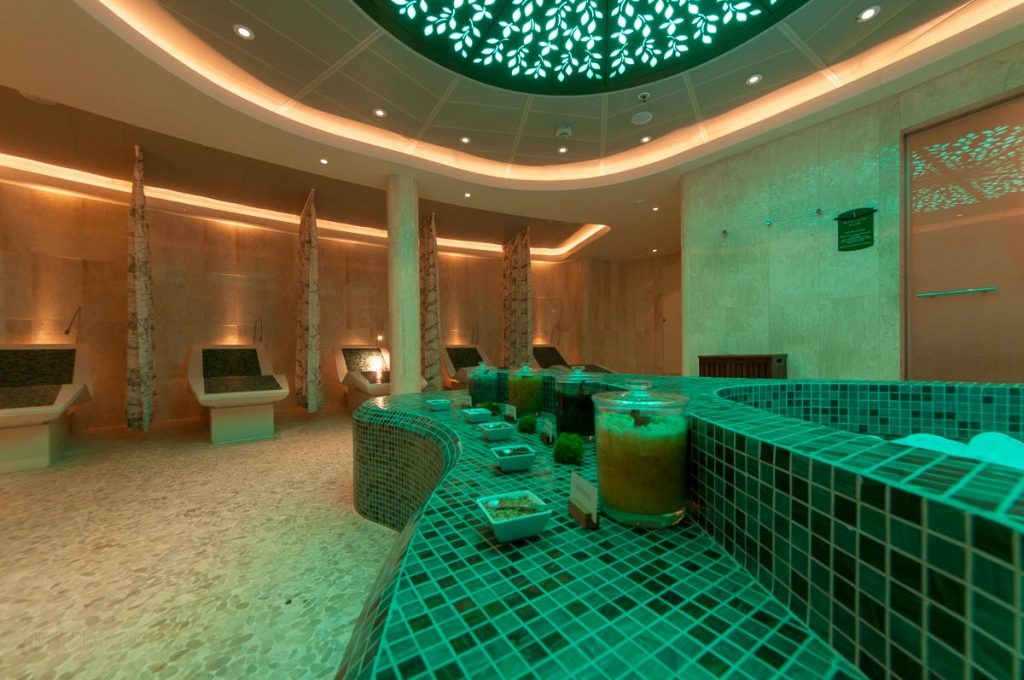 Signals bar was the real winner as this space needed an update for years. 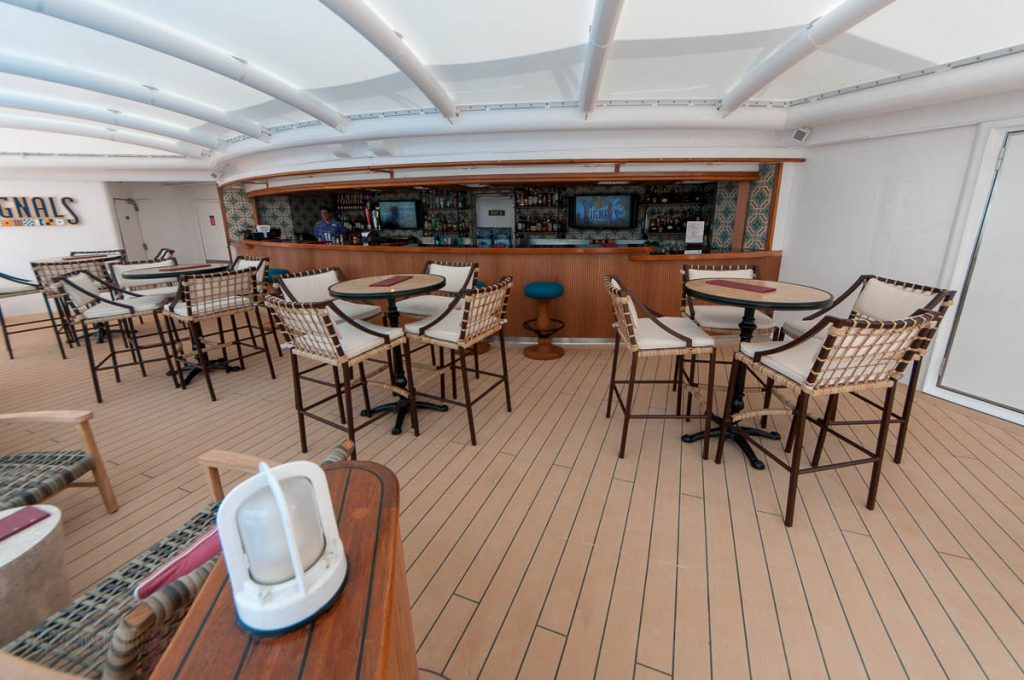 The Cove Cafe pairs well with Signals, although there is no longer a door exiting the cafe out to Signals. There is a door, it is just now an emergency exit. The area on your right when you first enter is much more inviting group bench seating and not as dark and cavernous with those individual chairs. 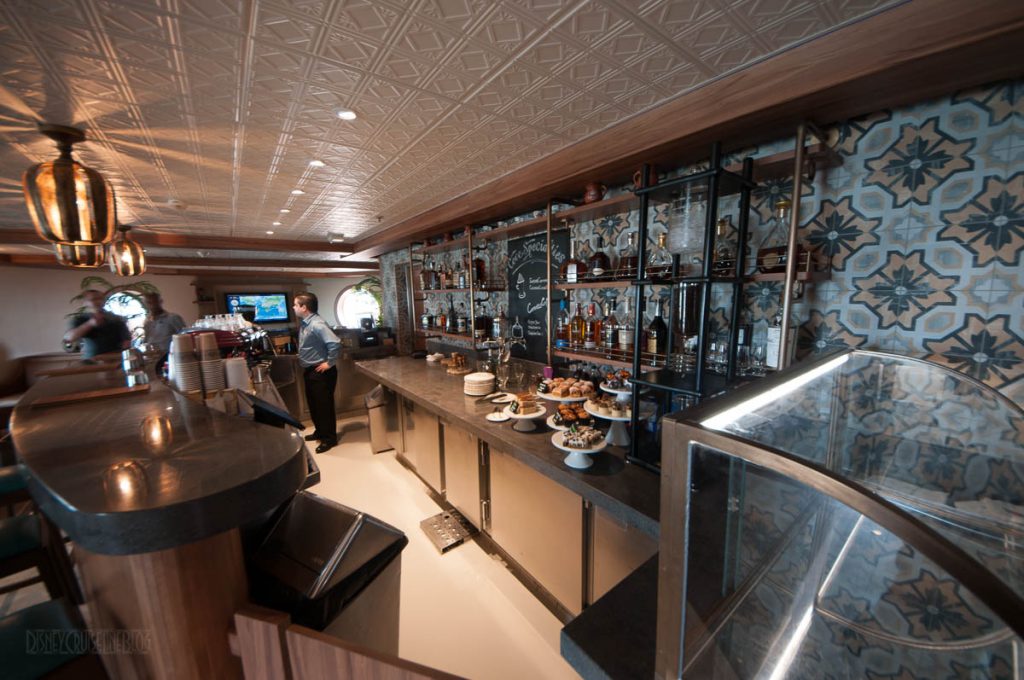 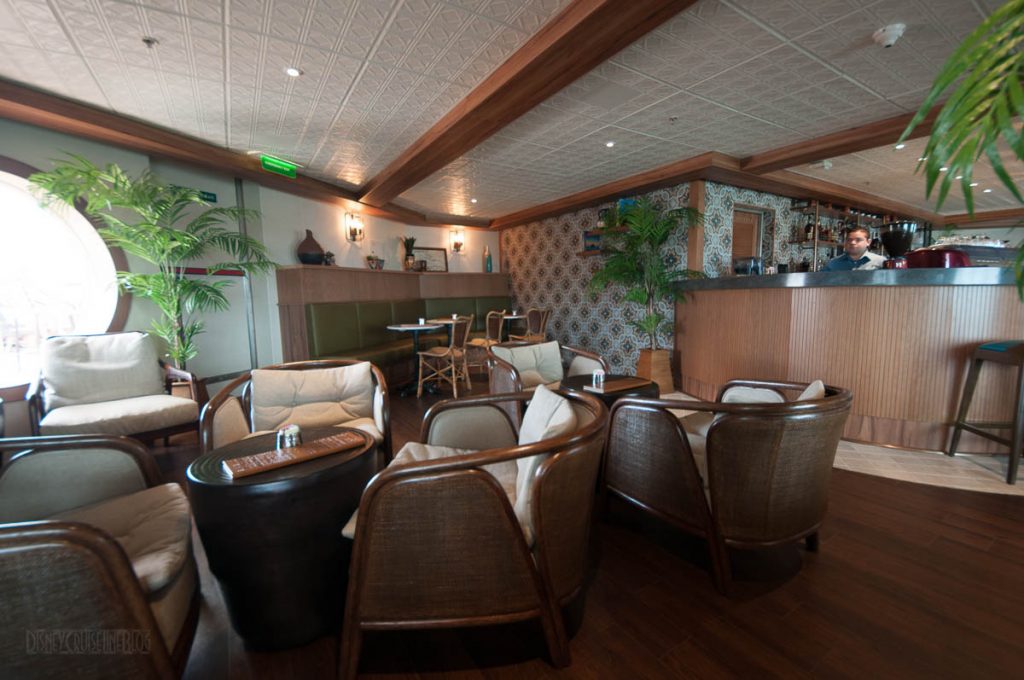 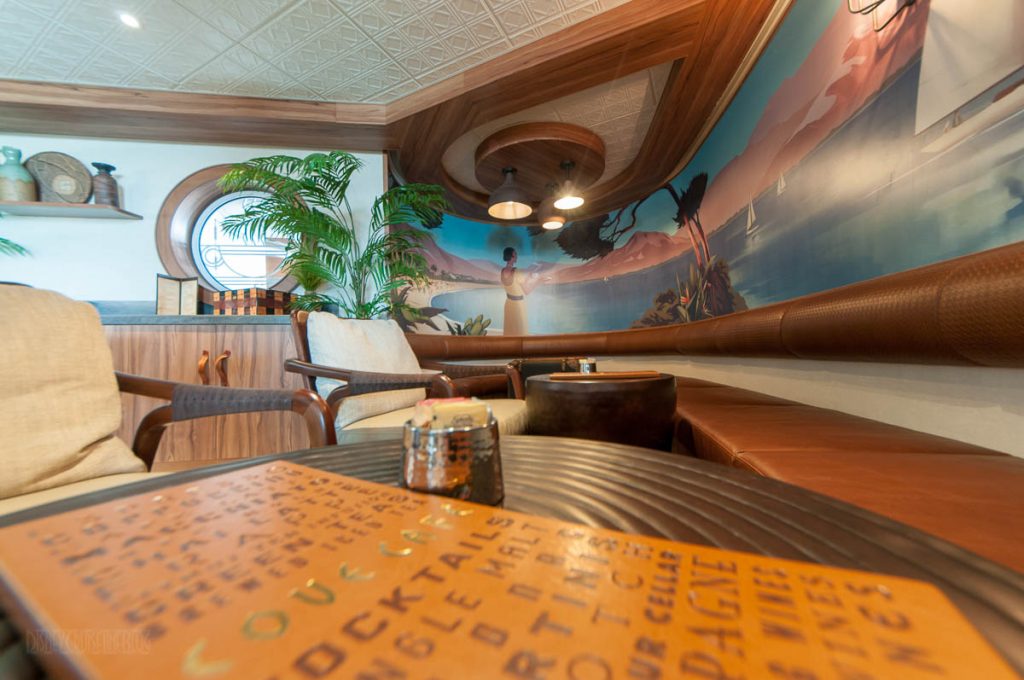 I’ll need to go back to try a few things as the menu has been updated.

Additional over near the AquaLab, Pete’s Boiler Bites was renamed to Duck-in Diner.

Duck-in Diner – a rebranding of Pete’s Boiler Bites still offers shawarma – not the best sign placement. Should have named it Wazowski’s Walk Up Diner pic.twitter.com/QBrNYyEbh5

Vibe received a full on redesign as a trendy urban loft look. The space looks great, we could see iPads and a Nintendo Switch in a locked cabinet. From the looks of it, the coffee and smoothie bar was really ready for prime time. Granted, this could just be an embarkation reset and it comes alive once it becomes a teen oasis. 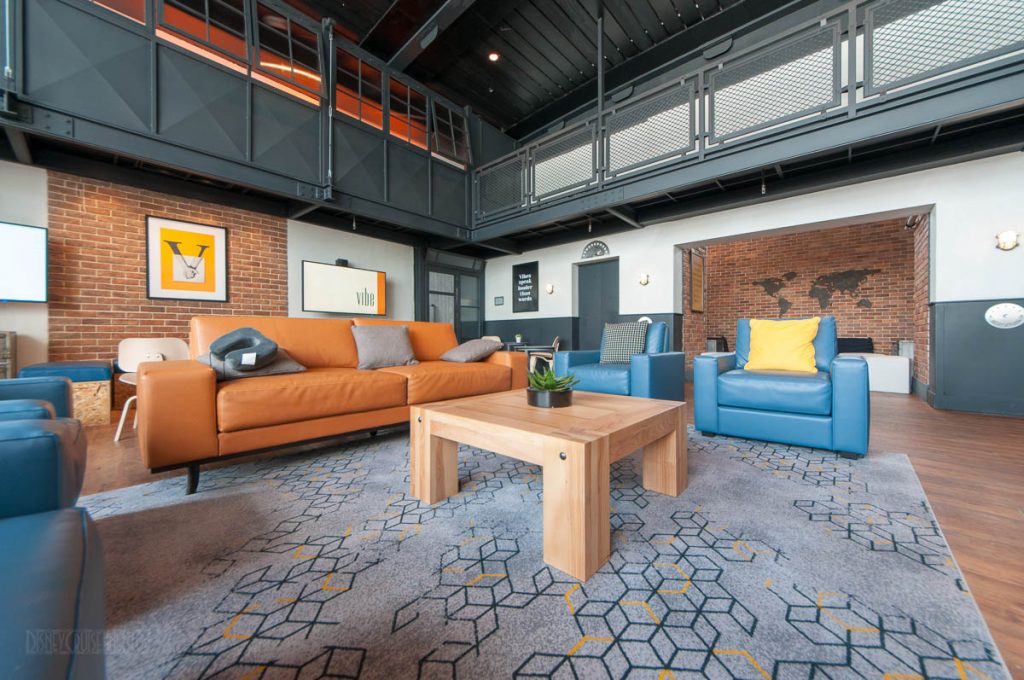 You might be noticing a trend of using embedded tweets to share photos. This is something I am going to experiment with in these trip logs on this sailing. I am still taking photos and video to add to these posts later as well as for stand alone posts such as one we will do for Rapunzel’s Royal Table. I going to try to pull in more social media content to avoid editing and uploading similar photos.

The staterooms were now open which allowed us to drop off our carry on bags… and so it begins. We started watching Guardians of the Galaxy….because we can. Really, because. the Disney Magic finally has on demand content in the stateroom along with access to our folio information like the Dream class! This leaves the Disney Wonder in the technological dark ages as the only ship in the fleet without on demand content. 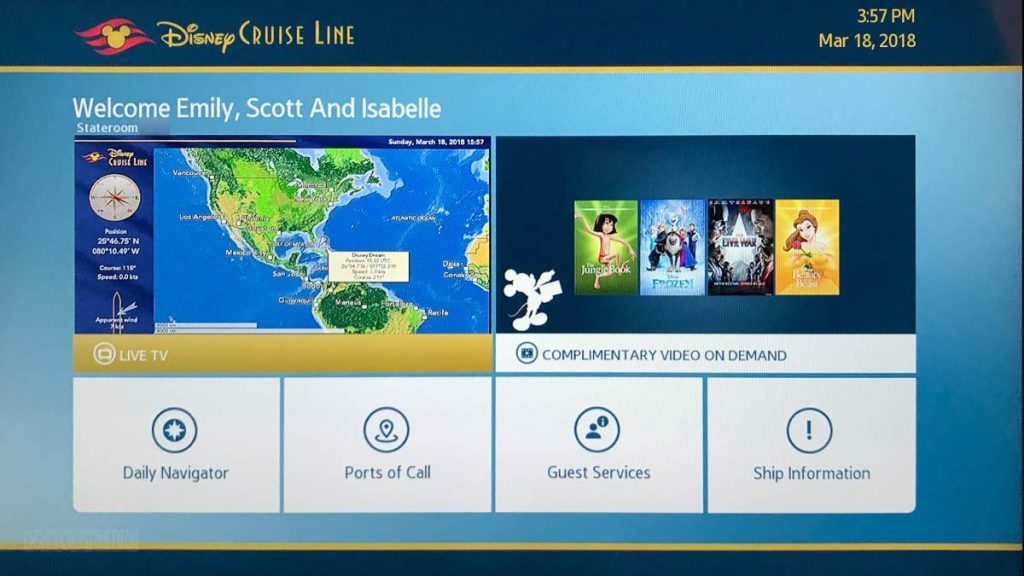 Isabelle and I headed down for a walk around of the Oceaneer Club and Oceaneer Lab to check out the changes. The Mickey Mouse Club space was refreshed and rebranded as Club Disney Junior.

Club Disney Junior remodel of the Oceaneer Club’s Mickey Mouse Club – poster not yet updated in the hallway. pic.twitter.com/cToZsZ7pA8

Returning to our room, we hung out waiting for our luggage which was MIA. Our stateroom host went to look for it after he inquired when we dropped it off and we told him 10:30. I was beginning to wonder if I really dropped my stuff off at a legitimate porter. I mean, he made sure to tell me, this is where I tip… What? I seriously considered putting the cash that I had ready for him in my hand back in my pocket and stiffing the guy for saying that.

Shortly before it was time for the muster drill, our awesome stateroom host knocked on our door with our luggage. He said it was sent to the opposite end of the ship, which on the Magic isn’t nearly as dramatic as the Dream class. It was really great that he tracked the two suitcases down in time for us to unpack before the muster drill.

Following the muster drill, we headed up for the sail away deck party.

For this cruise, our dinner rotation is ARLAR and tonight was the standard rotational menu. Now, if you are regular reader of these trip reports, you will know one of my bigger sticking points is the food. This evening’s dinner was great; the food had flavor and the service was excellent. The herb crusted pork chop tasted great albeit dried out/overcooked, it was still enjoyable. 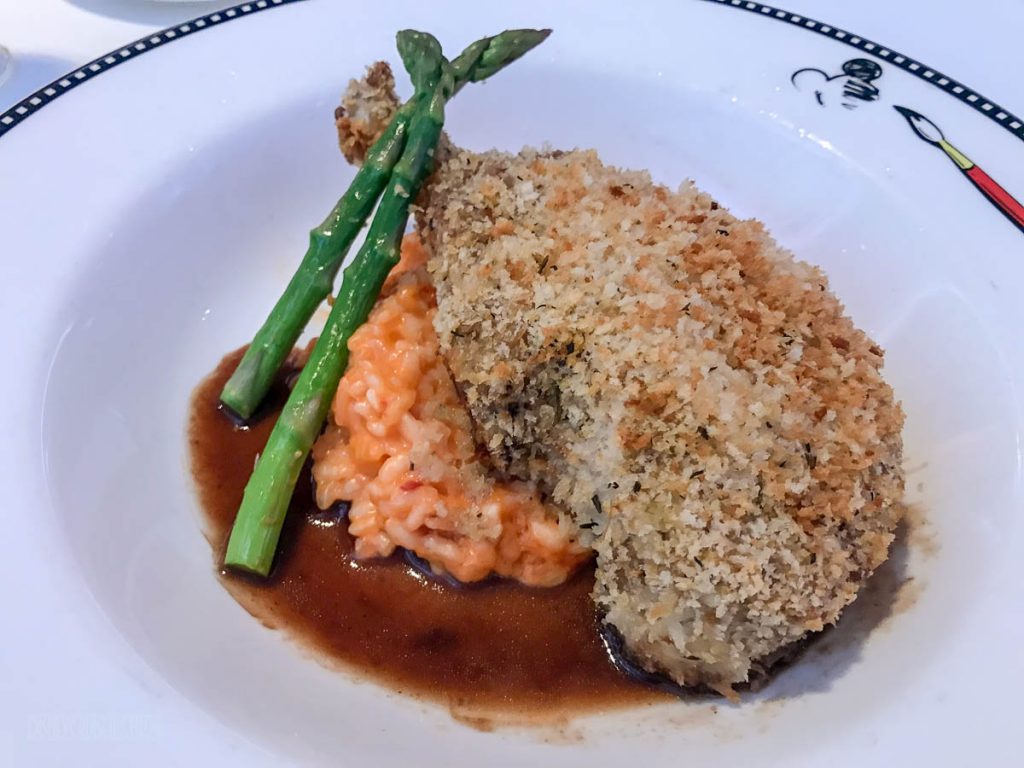 Isabelle ordered the Black Bean Chipotle Cakes and this is the best they have ever been. I’m going to try to make these at home now. 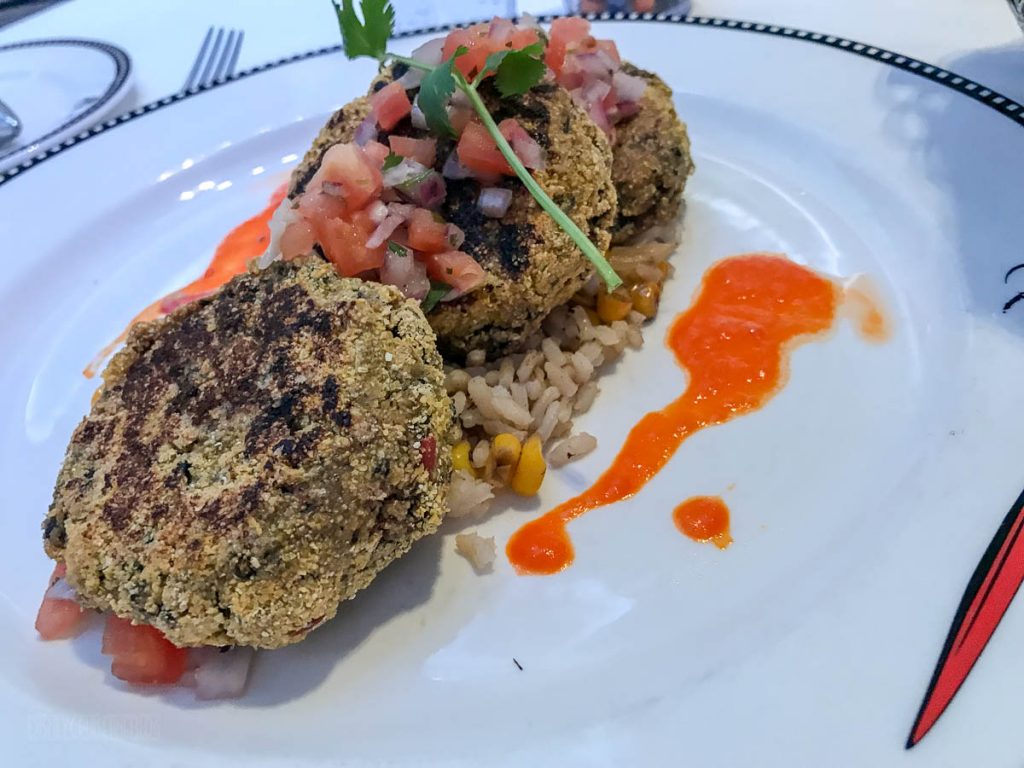 After dinner, we split up. Isabelle went to the lab for super sloppy science where they made volcanoes while Emily and I re-shopped the cruise we booked a couple weeks ago on opening day since were were out of placeholders.

This took a bit longer than we anticipated, but it was well worth it. We planned to meet Isabelle to go check out the shops. Since we had a few minutes to spare, we checked out the new menu in the Promenade Lounge which now features a SOMMELIER BIN!!!

🚨 🚨 🚨 NEW PROMENADE MENU INCLUDES A SOMMELIER BIN 🚨 🚨 🚨#DisneyMagic – although they don’t have anything available at this time pic.twitter.com/Roht1reh6i

Although, when we inquired, we were told they did not have anything available. Third cruise after dry dock and no leftover open bottles of wine on the first night. We will check back later.

We all headed up to the shops to check on the merchandise and were instantly drawn to the Marvel Day at Sea stuff in Mickey’s Mainsail. I think we all ended up getting something including name tags which are available down in Sea Treasures in After Hours. This is set up with various Marvel merchandise and toys that are not specific to Marvel Day at Sea, but this is were they have the engraver set up to create the name tags on demand. For those wondering, Wakanda is not currently a choice as it is technically Terra (Earth). 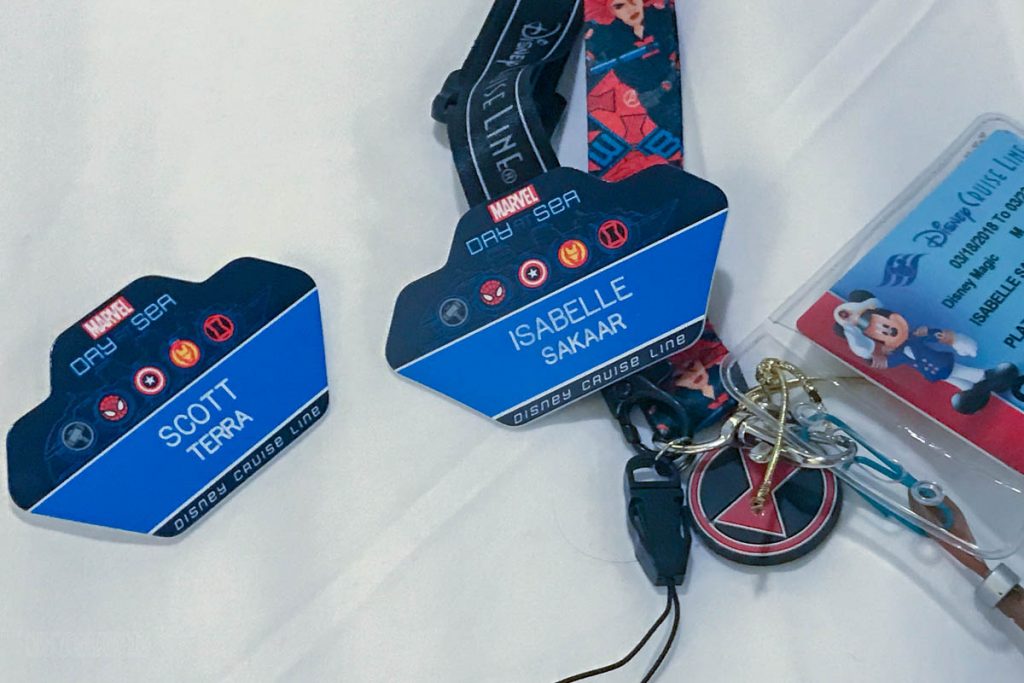 Although we turn the clocks back tonight, we called it a night.

Please  let us know if you have any specific questions about the dry dock changes or any other questions related to the Disney Magic.