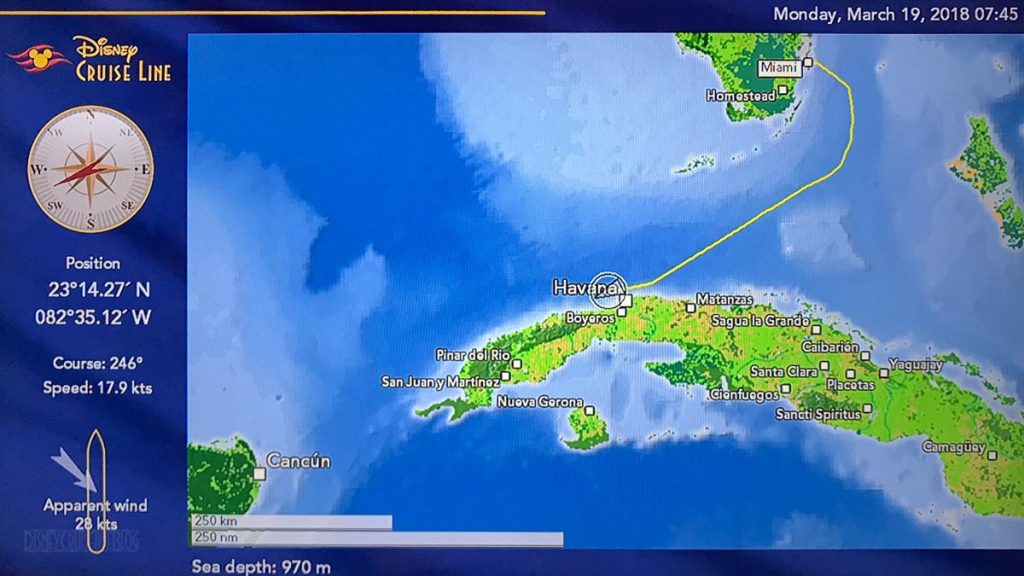 Happy Birthday Isabelle!!! Today is a milestone as she is now officially old enough to hang out in EDGE, the tween space on the ships. It seems like only yesterday we were checking a 3 1/2 year old into the Oceaneer Club.

I was shocked by the amount of people in the gym this morning shortly after 6AM when it opened. Ok, it was more like 7 since we gained an hour last night due to the changing of time zones as we sail towards Cozumel. During dry dock, the gym equipment was swapped out with brand new Life Fitness machines with all the bells and whistles. The cardio machines all have bluetooth and use the app. I will try to find a direct link soon – for now search for Life Fitness in your smartphone’s App Store.

Isabelle met us outside Senses and we headed to Cabanas and enjoyed breakfast on the aft deck. From there, we headed to the pool and camped out poolside for some Funnel Vision.

There was about 45 minutes before the pool opened and CinderKing was on Funnel Vision. Not familiar with CinderKing? It is an all new hybrid presentation of Cinderella and Lion King where Cinderella cuts to Mufasa’s death then back to Cinderella. I can’t make this up; we watched him die twice this morning. Technical issues aside, I’d pick this over a regular Monday morning.

Since we had some time to kill (sorry, sticking with the CinderKing theme), Isabelle and I headed up to the Wide World of Sports deck to play table tennis, which is even tougher with apparent winds. While were up there, we ran into Ken who I’ve only known through Twitter.

Cove Cafe hits the spot! Also cards no longer mention anything about being limited to this voyage. pic.twitter.com/O5oKXehlgk

We spent the morning poolside watching the movies & researching port adventures for our next adventure. DCL’s website is free to use onboard the ships without needing a data plan. This is great for last minute planning, or narrowing down a future cruise to speed up your time at the rebooking desk. It is also great for cruise bloggers to get the details for their Monday Special Offers post.

The DCL site works great in some areas, but is dreadfully slow when you are logged in and working with an upcoming reservation. As Emily was patiently waiting for pages to load, I headed down to the port adventures deck to learn what I expected; that they will only work with you the current sailing’s port adventures and do not have information for future sailings in other parts of the world… It was worth asking, as this was a question I’v received before and had no idea.

While I was at the Port Adventures desk, I picked up the Spot-a-Thug scavenger hunt paper. This is a fun ship-wide activity on the days when Tangled is performed in the evening. More or less, it is a Classic ship version of Midship Detective Agency and very similar to Anna’s Chocolate Chase which is offered on the Wonder in Alaska and select summer voyages on the Wonder.

As I returned to the pool deck, it was lunch time. Isabelle and Emily discovered something amazing at Pinocchio’s – mushroom and blue cheese pizza. It was awesome to see such an “adventurous” option on the pool deck.

Bonus lunch after we discovered mushroom and blue cheese 🍕 at Pinocchio’s – nice to see a more adventurous option. #DisneyCruise pic.twitter.com/Hn0UpscToS

I opted to grab lunch at Daisy’s De-Lites. Today, the sandwiches all looked great and the salads were plentiful. Additionally, they were offering a build a bowl which we thought was a great option last summer on the Wonder in Alaska. I opted for the turkey and cranberry panini which was made fresh and worth the wait – seriously, I’d rather wait, as this was a great sandwich because it was fresh; if pre-made under a warmer it would be a hard pass.

After lunch, the AquaDunk finally re-opened and the birthday girl was finally ready to give it a go after passing on previous sailings. To be fair, one of those sailings was a Norway and Iceland cruise where it was way too cold for us Floridians to bare any skin let alone go swimming.

Any and all reservations she may of had went overboard and she is now always ready to go again… Problem this afternoon, so was everyone else and the 10 second experience was taking at least 60-90 seconds between guests. In an abundance of safety, I know, I get it, just pointing out (NOT COMPLAINING) it leads to longer lines.

Following the AquaDunk, I was cold. Emily took a dip in the Goofy pool hot tub. I was about to join her until I saw a little kid jump and basically land on her lap. I have a kid, I love my kid, but no. I immediately pulled a Crazy Ivan and made a b-line to the Quiet Cove hot tub.

When I returned, Isabelle and I took off to find a few more of the Thugs around the ship. Two of the three hidden around deck 3 forward are really well hidden. Still, 3 hours later as I am writing this, we still haven’t found the final two supposedly somewhere around After Hours.

Isabelle and I were gone much longer than expected. We made our way back to where Emily was sitting near the pool.

Kids playing a game. Winning team gets to pick the next funnel vision movie. What movie would you like to watch? pic.twitter.com/Xg3FLZ7udR

It was time for an activity where the kids played a bingo game where the winners ultimately were given the opportunity to pick the next Funnel Vision movie. Today’s pick was Peter Pan.

Shortly after the movie started we packed up and return to the stateroom and cleaned up. Then, made our way to Fathoms for Danny Buckler’s comedy show. Isabelle really enjoyed the show, I zoned out typing up this trip log and was in no way impacted by the Citron Martini. Bonus points on the martini for using freshly squeezed lemons and not straining out the pulp, a subtle difference that was nice.

After the show, Emily and I meandered over to O’Gills… I mean The Snuggly Duckling for a bit. Em ordered an Celtic Twilight and the pretzel. We both agreed the cocktail was good, but if ordered again, we’d ask to hold the peppermint. The pretzel was delicious.

The Celtic Twilight from O’Gills err The Snuggly Duckling – not bad, but next time we’d ask them to hold the peppermint. pic.twitter.com/U3HtlCSMow

During this time, Isabelle was in the EDGE making bracelets and playing four square before rejoining us on outside on deck 4. Though it was very loud, it was different than the club/lab. There was much to do. We returned to the room to relax and watch Avengers: Age of Ultron before dinner.

Tonight’s dinner was in Rapunzel’s which we have been waiting to experience for what seems like forever. That’s a little dramatic, but Tangled was released when Isabelle was at the age where we’d watch the movie and play the soundtrack over and over. We still love the film and really enjoy the stage production in the Walt Disney Theater on the Magic. In my opinion, if Disney treated Frozen like Tangled, I’d still be willing to consume Frozen content on a regular basis. Any way, lets move on to a micro review of Rapunzel’s Royal Table as a full on post with video is deserved.

Overall, the consensus was that we loved the restaurant and the dinner experience. Being that the evening is a celebration of Rapunzel’s birthday it was really special that our first time in the restaurant was Isabelle’s actual birthday.

After talking it over with Emily and Isabelle, I am in the minority when I say I left disappointed as I felt the overall experience is not show ready in terms of timing and audio levels. To DCL’s credit, they are aware and are working to make it right. My biggest issue was the ambient noise in the restaurant is so loud, I could not hear the band let alone the dialog from the performers. The important takeaway is that the show and the character integration is fantastic.

A lot of my disappointment is based on how high the bar was set by Tiana’s Place – with Rapunzel’s being in the same venue, I expected the acoustic issues to have been resolved on the Wonder and that knowledge applied on the Magic.

As a parting thought on this micro review of Rapunzel’s, the experience is brand new and less than three weeks old. We first experienced Tiana’s Place about 3 months after it first opened. In the end, it is a great upgrade and as much as I originally loved Carioca’s, I do not miss it for one second.

After dinner, we headed in to The Snuggly Duckling for a friendly game of THUGO. This is a fun Tangled event that occurs each night Tangled the Musical is performed on the Magic. It is BINGO with a Tangled twist and the event ends with a sing-a-long.

Time for a major family decision… Go see Tangled or go see Black Panther? The movie won out as we’ve been itching to get back in a theater to see the film since we left the opening weekend screening.

Time for Black Panther to end the day! pic.twitter.com/xbQ7KsnkZ4

Isabelle left half way through the movie to go to bed.

Tomorrow we head to Cozumel.