There has been a bit of uncertainty with regard to the Pirates IN the Caribbean deck party and fireworks following the announcement of Star Wars Day at Sea and A Day of Frozen Fun which will begin in just a few months. This week, Disney Cruise Line attempted to clarify the impact these recently announced onboard experience will have on regular deck parties and fireworks during this summer’s European, Alaskan and next year’s Star Wars Day at Sea sailings by sharing the following information with travel agents to pass along to their clients. First and foremost, the actual day of the new deck parties are still undetermined. DCL is suggesting that guest should check their Personal Navigator onboard for specific information specific to their itinerary.

Beginning June 1st, the Disney Wonder 2015 7-Night Alaskan sailings will have A Pixar Pals Party! instead of the Pirates IN the Caribbean deck party which has been the case for the last couple of years. The Freezing the Night Away with Elsa, Anna and Friends deck party will also be offered. Fireworks will not be available during these sailings. It is noteworthy that this information does not specify if the events will occur on the May 25th DVC Member Cruise.

Starting with the May 30th sailing, only the Freezing the Night Away with Elsa, Anna and Friends deck party will be offered on the following sailings:

Fireworks nor Pirates IN the Caribbean deck parties will take place on these sailings.

For 2015 Mediterranean sailings, both the Pirates IN the Caribbean deck party with fireworks, as well as the Freezing the Night Away with Elsa, Anna and Friends deck party will be offered.

During the eight 7-Night Western Caribbean Cruises – Itinerary D sailings aboard the Dinsey Fantasy, guests will have the opportunity to enjoy the typical pirate night deck parties, Mickey’s Pirates IN the Caribbean Party, Buccaneer Blast & Club Pirate. However, fireworks will only be offered during the Star Wars deck party. 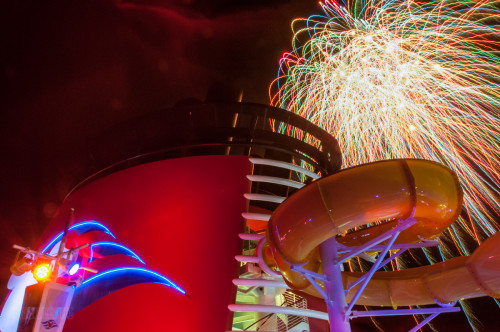 Finally, it was noted by Disney that all entertainment is subject to change.