Disney Cruise Line and Star Wars are teaming up to bring the iconic characters to a the Disney Fantasy beginning in January 2016. Each of the eight, 7-night sailings will feature a Star Wars Day at Sea. This new onboard experience will be the first official appearance of Star Wars aboard a Disney Cruise ship. I guess I will take credit for this considering I suggested this on the day Disney made the big purchase from Lucas.

Meet and greets will feature fan favorites such as Darth Vader, Chewbacca, Boba Fett, Stormtroopers and other characters from across the Star Wars galaxy. 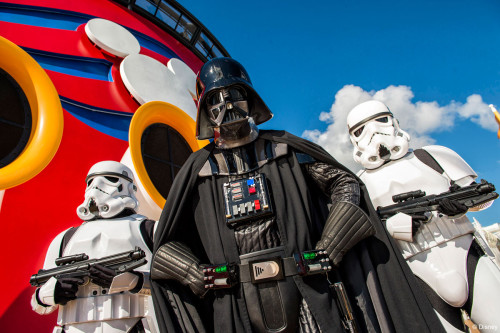 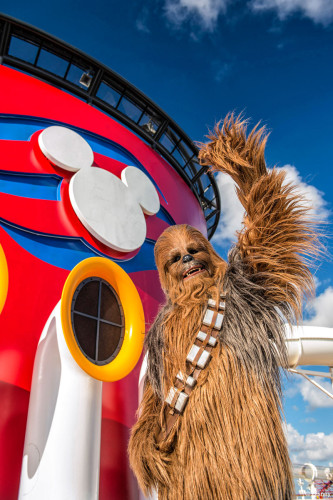 A version of Jedi Training Academy specifically designed for the ship will be available for young Padawans which will teach Jedi hopefuls some proper lightsaber moves which will culminate with a face off in a final test against the evil Darth Vader. 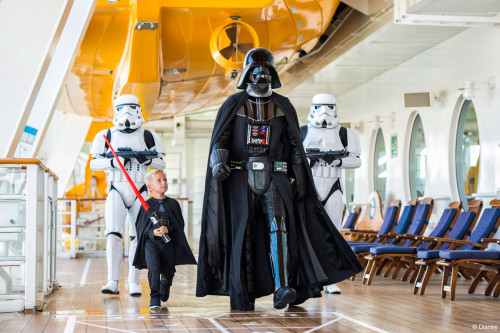 Kids and families enjoy friendly competition during Star Wars trivia games, covering fun facts from the film and television sagas.
For Younglings, Star Wars-themed arts and crafts, games and activities will be offered throughout the day in Oceaneer Club and Oceaneer Lab youth clubs.

In the evening, adults entering the night club will feel like they stepped into the Mos Eisley cantina scene. Characters and cantina music set the mood as Star Wars-themed specialty cocktails are served.

During each of the special sailings, celebrities and insiders from the Star Wars galaxy will share their experiences, meet fans and sign autographs.

To cap of the activities there will be a Star Wars Deck Party complete with fireworks. The Star Wars deck party blasts off to an exciting evening filled with music, dancing and games. Star Wars characters will converge on the deck stage for a celebration of the Star Wars saga in a show featuring special effects and guest participation.

This is not the first big announcement from DCL. Recently, it was announced that there will be special Frozen inspired experiences coming to the ships this summer.

Disney Cruise Line be confirmed that this is not replacing Pirate Night on these sailing. Guest will have the opportunity to enjoy both themed experiences. However, fireworks will only take place once during each cruise as part of the Star Wars event.

Will you be booking one of these sailings?