Beginning in summer 2015, Disney Cruise Line will embark on a magical new journey to the land which inspired the mega hit, Frozen. The Disney Magic will call on Stavanger, Alesund, Kristiansand, Geiranger, Molde, Olden, Bergen and Oslo during a number of itineraries. The first visit to Norway this summer will be in Oslo near the end of the 15-Night Eastbound Transatlantic Cruise.

Not only will Disney Cruise Line be sailing to the Norway, they will also be brining Frozen inspired experiences fleet-wide to enhance Guests’ summertime fun. These all new Frozen inspired experiences will range from memorable meet and greet opportunities with the beloved Frozen characters, deck parties, a new production number in Disney Dreams and some fun with Olaf on Castaway Cay. 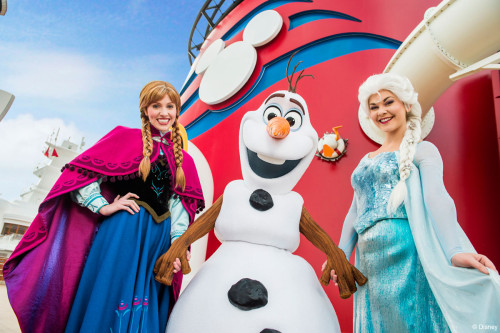 Disney Cruise Line guests sailing aboard the Disney Magic to Norway this summer will have the opportunity to join exciting new Port Adventures that bring this fairytale setting to life. One signature excursion in Alesund, Norway, which has been designed exclusively for Disney Cruise Line, will immerse guests in the splendor and charm of Norway, with the help of Anna and Elsa, in an enchanting storybook village.

Other shore excursions will takes guests on a journey to the breathtaking natural wonders, stunning architecture and rich Scandinavian culture used as inspiration for the film. The port adventures are still not listed on DCL’s website, but should be added in the near future as booking windows will be opening very soon.

A Day of Frozen Fun

The Disney Magic & Disney Wonder will feature a Day of Frozen Fun on select sailings in Europe & Alaska. The classic ships will transform into a winter wonderland for a day of frozen fun with an extravagant celebration with friends from the Kingdom of Arendelle. On one morning of the cruise, guest will awake to a see the atrium transformed into Elsa’s ice palace. A magical freeze will bring with it sparkling icicles on the grand staircase. Icy adventures will continue throughout the day with an all-new meet and greets and themed experiences.

Kristoff & Olaf will join Anna & Elsa for their debuts at sea. The chocolate loving Anna created a scavenger hunt called Anna’s Chase for the Chocolate. A Do You Want to Build a Snowman activity will give kids Elsa’s magical powers to make snow and ice. Guests will have the opportunity to learn the traditional Scandinavian dance of spinning and braiding giant ribbons in the Maypole Swirl and Twirl. 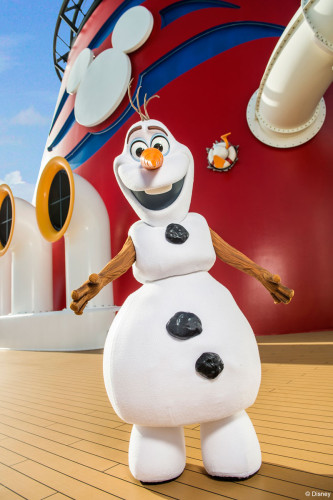 A Frozen themed dining experience will feature a menu inspired by traditional Nordic fare and special dishes inspired by the film.

The evening is filled with more than just a themed dinner menu. The atrium freeze will spread to the upper decks of the ship, with giant snowflakes, icicles and snow-covered rocks for the Freezing the Night Away deck party with Anna, Elsa and Friends. The celebration begins with a high-energy line dance, set to the movie’s ice cutting scene, featuring the arrival of Kristoff, impressively twirling his ice picks, and Princess Anna.

Anna and Kristoff’s beloved companions, Sven, the trolls and Olaf, make virtual appearances at the party. Sven engages the crowd in reindeer games like “Sven Says” and the “Troll Stroll,” and Olaf leads a sing along to his signature song, “In Summer.”

Elsa will arrive with a snowy gust of wind, calling on guests to sing “Let it Go” with her as she conjures up a wintry spectacle to cool things down for Olaf. In true Disney fashion, Elsa unleashes her magic, sending a chill through everyone as the powerful Academy Award-winning song echoes from the ship. 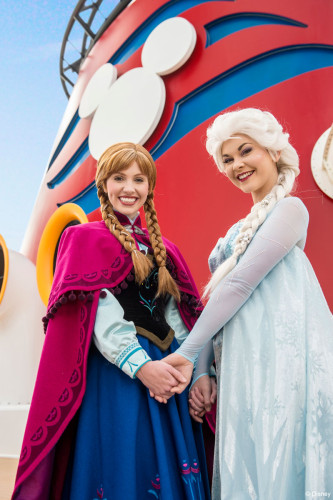 The evening concludes with more dancing on the pool deck, followed by fun just for adults in the nightclub featuring dance performances and frozen specialty drinks.

Last year, it was revealed in a casting call that Elsa would be incorporated into the stage shows aboard the Disney Cruise ships. Well, the details are now ice crystal clear… sorry… This summer friends from Frozen will make their Walt Disney Theatre Stage debut in Disney Dreams An Enchanted Classic. Anna, Elsa and Olaf will join the show and help Anne Marie discover the power of her dreams. This brand new segment will feature Let It Go, For the First Time in Forever and In Summer in a heartfelt, humorous and memorable tribute to the film. Special effects will include snowfall throughout the theatre. Disney Dreams An Enchanted Classic is featured on the Disney Magic and Disney Wonder, however, the Disney Parks Blog mentions the addition just aboard the Disney Magic.

So far, the frozen fun has been limited to the classic ships, but Olaf will join Anna & Elsa for magical meet and greet opportunities on the Disney Dream and Disney Fantasy as well as the classic ships. 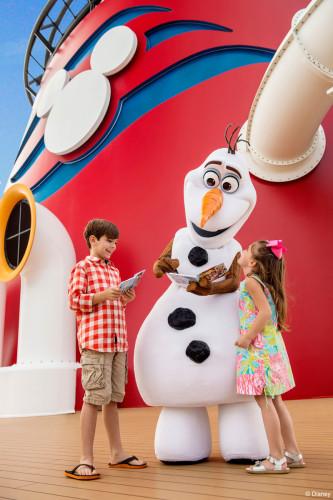 Olaf will no long be just a movie theatre prop in the Bahamas. 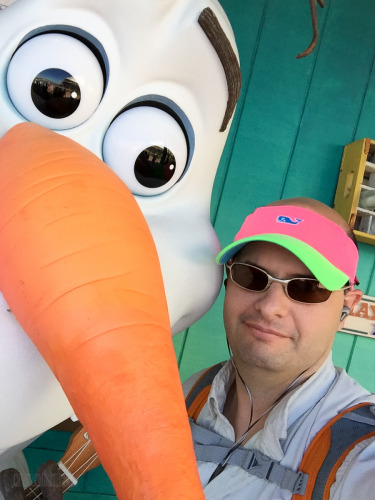 Olaf will be taking his talents to the Bahamas to cool down Castaway Cay with the in Olaf’s Summertime Freeze bar near the Pelican Point tram stop by the family beach. The Frozen inspired bar will serve non-alcoholic specialty frozen drinks in souvenir cups. The refreshing beverages will include Olaf’s Flurry Freeze, Sven’s Carrot Delight and Warm Hugs.

Starting this summer is a little vague, especially for those that are booked on an upcoming cruise, or may even be booked on a summer sailing. We contacted Disney Cruise Line to see when the respective Frozen experiences are scheduled to debut on each ship. We were informed that Disney Cruise Line does not have any dates to share at this time and to keep an eye out on the Disney Parks Blog for more information about these offerings.

The start of summer is usually denoted in the United States by Memorial Day, which in 2015 falls on Monday, May 25th.

The Disney Wonder leaves Miami on May 1st for the west coast and will begin sailing 7-Night Alaskan cruises on  May 25th. The May 25th sailing is a DVC Member Cruise with the next 7-Night leaving Vancouver on June 1st.

The Disney Magic will leave Port Canaveral on May 15th to head to Northern Europe. Her first 7-Night Norwegian Fjords cruise will embark from Copenhagen on June 6th.

Below is a snippet from our February 13th article.

Beginning June 1st, the Disney Wonder 2015 7-Night Alaskan sailings will have A Pixar Pals Party! instead of the Pirates IN the Caribbean Deck Party which has been the case for the last couple of years. The Freezing the Night Away with Elsa, Anna and Friends Deck Party will also be offered. Fireworks will not be available during these sailings. It is noteworthy that this information does not specify the events will occur on the May 25th DVC Member Cruise.

Starting with the May 30th sailing, only the Freezing the Night Away with Elsa, Anna and Friends Deck Party will be offered on the following sailings:

Fireworks and Pirates IN the Caribbean Deck Party will not take place on these sailings.

For 2015 Mediterranean sailings, both the Pirates IN the Caribbean Deck Party with fireworks as well as the Freezing the Night Away with Elsa, Anna and Friends Deck Party will be offered.