The Pixar gang will be invading the [Disney_Wonder] during this summer’s Alaskan cruises which begin on May 27th.  Instead of the usual Pirates IN the Caribbean Deck Party, the Pixar gang will congregate in the Wonder’s atrium for a Pixar Pals Party.

The party will include an “unforgettable meet and greet” according to Disney Cruise Line, with some of the Toy Story gang as well as other Pixar favorites.  This party will conclude with an interactive sing along to the signature song, “You’ve Got a Friend in Me.”

Last fall, the Pixar gang took over the Wonder for a month of Pixar Themed cruises sailing the up and down the California Coast.  These cruises included a special Toy Story dinner complete with 3D Menu to coincided with Toy Story the Musical.  According to the Personal Navigators from one of last year’s Pixar cruises, the Pixar Pals greeted  guests at 2 PM and 5 PM. 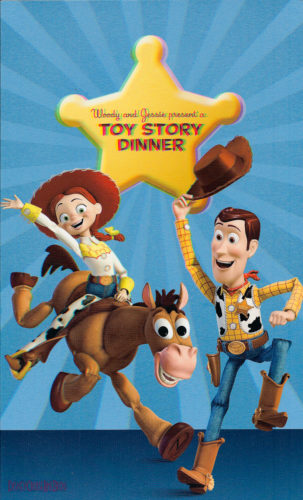 I found a video on YouTube of the first Pixar Pals meet and greet on the Disney Wonder that included Dug & Russell from UP, Remy and Emile from Ratatouille, Mr & Mrs Incredible, Flick from A Bug’s Life, and Woody & Jessie from Toy Story.

I did ask Disney Cruise Line if the change from the Pirate Deck Party to an inside Pixar Pal Party was weather related or due to noise ordinances in Alaska, or any other factor.  However, a reason was not provided.

What do you think about this change?

UPDATE – Here are some videos from this year’s Alaskan Cruises.

5 Replies to “Mutiny on the Wonder: Pixar Pals Party Replacing the Pirates IN the Caribbean Deck Party on Alaskan Sailings”