Over the past we days we’ve taken close a close looks at the St Maarten and Jamaica port schedules to get a better idea of what we can expect from Disney Cruise Line in 2014 and beyond. The next port we are going to look at is Grand Cayman.  I could be wrong, but I was unable to look up any late 2014 information on Disney Cruise ships on the Grand Cayman schedule over the weekend, but earlier this week, they were there.

Building on what we’ve learned and with the additional information gleaned from the Grand Cayman schedule, I think it is now safe to say the [Disney_Fantasy] will continue to sail alternating 7-Night Eastern & Western Caribbean cruises from Port Canaveral.  The only notable change is that beginning in May 2014, the Fantasy will drop Costa Maya in favor of Falmouth, Jamaica on her Western Caribbean sailings.

The Disney Magic also appears to be sailing to Grand Cayman after her (expected) return from Europe in 2014.  Starting in November 2014, the Magic appears on the calendar every other Sunday.  If you take into consideration the Fantasy appearing weekly on the St Maarten calender in December 2014 (assuming that the Fantasy is being used as a generic placeholder), it is plausible to think the Magic may be alternating weeks opposite the Fantasy.  Or even better, the Magic may add those briefly shown Southern Caribbean ports of St Lucia, St Croix and Aruba. 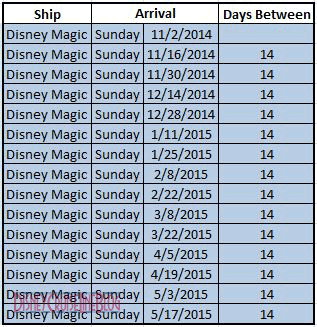 The Disney Wonder too makes a big splash in Grand Cayman in the Fall of 2014 with weekly stops on Wednesday through May 2015. 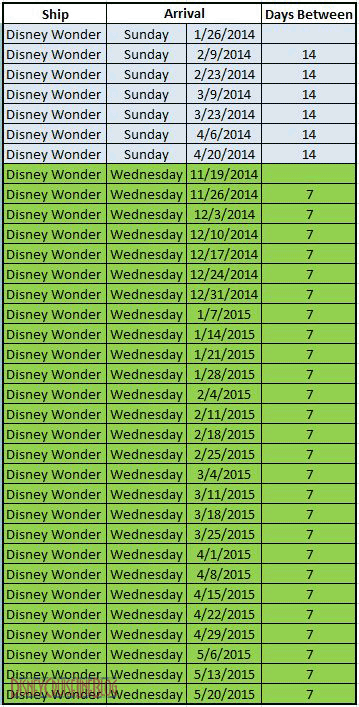 We’ve looked at a few port schedules over the course of the last few days.  It is definably a lot of information, and I am sure I’ve missed a thing or two.  Check back tomorrow as I try to wrap things up.  Here is a teaser…. 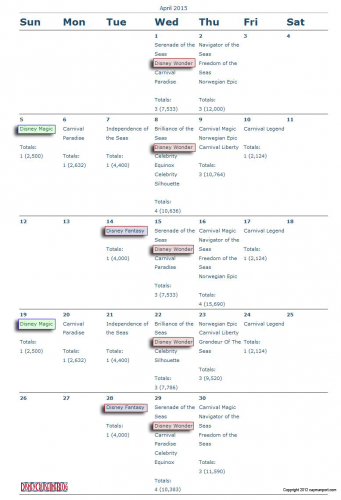 Are you getting excited about the later half of 2014?

3 Replies to “The Grand Cayman Port Calendar: What Can It Tell Us About Late 2014 Itineraries and Beyond”