In early December, Disney Cruise Line release itineraries for part of 2014 leaving the second half of the year up in the air for the Magic and Wonder. There has been a good deal of speculation over the last month… Will the Magic return to the Med and will the Wonder return to Alaska? What about New York?

We finally have one answer. The [Disney_Magic] will return to the Mediterranean in 2014, at least according to the Port of Madeira’s Website. The Disney Magic is scheduled to be in Funchal, Portugal on May 27, 2014. This would indicate a Eastbound Transatlantic Cruise from Port Canaveral on, or around May 19, 2014. 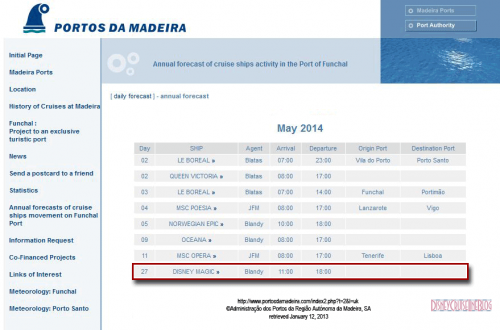 Funchal serves as rest stop of sorts on Transatlantic cruises. In 2013, the Magic will sail on a Eastbound Transatlantic cruise from Galveston, Texas on May 18, 2013. She will arrive in Funchal, Madeira on May 28, 2013 then set off for Barcelona, Spain to begin the first of 12 Mediterranean cruises. After those sailings the Magic will undergo an extensive dry dock before returning to Miami, Florida in late October.

Personally, I had speculated that the Wonder would sail to Europe in 2014 for an extensive dry dock like the Magic this year. I am still not willing to let this go as there could be a switcheroo.

Thank you Heather for the heads up! 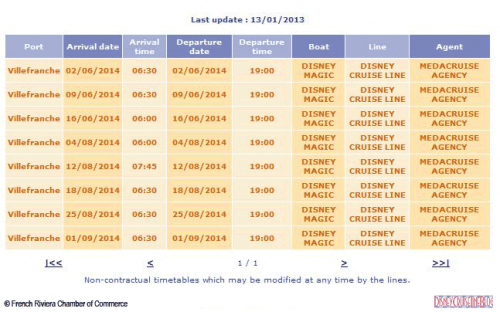 Using these dates and current itineraries we can speculate the following:

This leaves a considerable gap between June 21, 2014 and August 1, 2014.  This could indicate additional Mediterranean sailings without calls to Villefranche, but this is unlikely as this is a regular port of call on the Mediterranean cruises.  The other possibility, and more likely option is a return to the Baltics.  A return to the Baltics is a good bed considering Copenhagen was briefly shown in a slideshow on Disney Cruise Line’s website in early November 2012.

Thanks you Heather & Tracy for the tip on Villefranche.