Yesterday, we discovered that the [Disney_Magic] is more than likely headed to Europe in 2014.  While, I was trying to find more pieces to this puzzle I noticed some interesting things on the St Maarten Port schedule.

On October 22, 2013 the Magic appears on the St Maarten schedule.  Currently, the Magic is scheduled to be sailing on a 5-Night Bahamian Cruise on Disney Magic – Itinerary A from Miami, Florida.  In fact, on October 22 she is scheduled to be at sea between her first stop at Castaway Cay and Nassau.  Is this an error on the schedule, or is this a sign that the dry dock will be a little longer than expected, or will there be a Westbound Transatlantic cruise with passengers resulting in a later arrival to Miami? 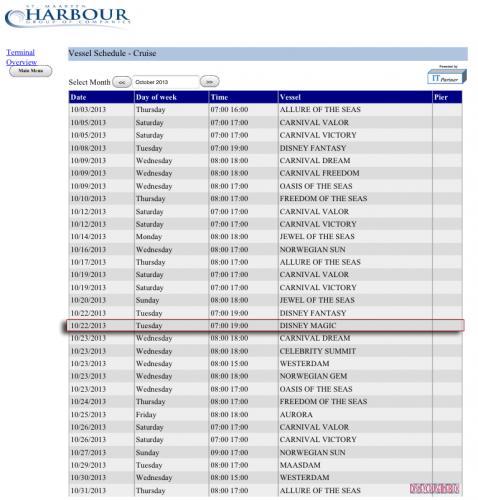 Moving ahead to 2014 the Magic appears yet again, this time on September 18, 2014.  Again, building off of yesterday’s  discovery we could speculate that the Magic will be in Europe from late May 2014 to early September 2014.  Could the Magic be returning to take over the Wonder sailings while she then goes for her dry dock? 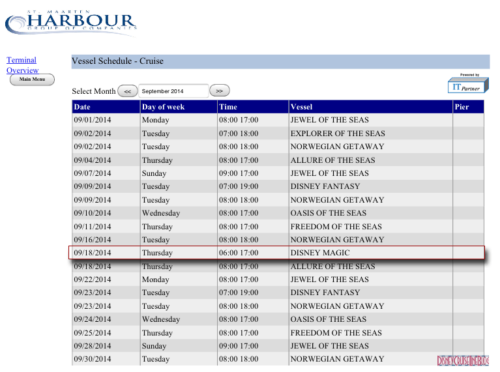 Finally, the alternating Eastern & Western Caribbean cruises on the [Disney_Fantasy] come into question when you look at the December 2014 St Maarten port schedule.  On the surface it looks normal, but there are 5 Tuesdays in that month and the Fantasy is scheduled on each. 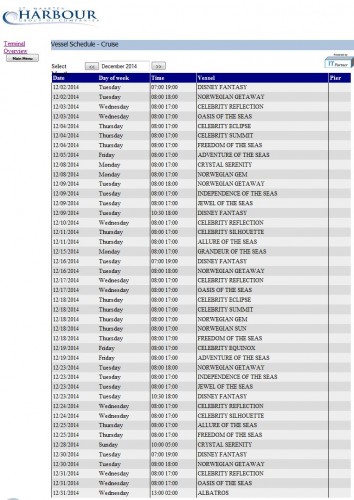 In fact, starting with November 25, 2012 the Fantasy appears to be in St Maarten weekly.  If you remember back to early November, the Disney Cruise Line website briefly showed some new Caribbean ports of call in their slideshows.  Will the Fantasy be doing Easterns while the Magic or Wonder sail on Westerns?  Does this indicate special holiday cruises on the Fantasy, or is the Fantasy a place holder for another ship a la the Jamaica schedule.  However, this again could just be a mistake on the schedule.

What do you think the St Maarten schedule is trying to tell us about 2014?

5 Replies to “The St Maarten Port Calendar: What Can It Tell Us About Late 2014 Itineraries”