Remember back in May when I floated out the possibility of Disney Cruise Line adding Jamaica as a port of call, after it was reported that the Port Authority of Jamaica was wooing cruise line executives? Well, the mystery ship PAJ43-12, which I’ve been speculating as the [Disney_Wonder] has all new dates. In fact that mystery ship could be ships! 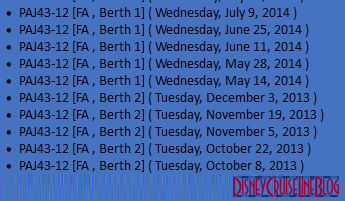 Starting, October 8, 2013 PAJ43-12 is on the calendar 5 times every other Tuesday. This would fit with my initial speculation (one commenter mentioned that her server confirmed they would be going to Jamaica) that the Wonder would alternate between Jamaica and Grand Cayman during her 7-Night Western Caribbean Cruises from Galveston, Texas. 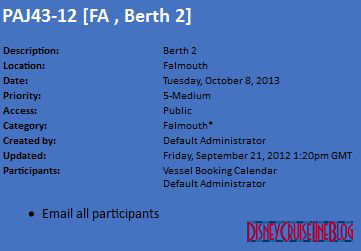 Disney Cruise Line has already modified some Galveston Sailings, so this change to a current itinerary would not be a shocker.

Earlier this month, I put together a possible look at 2014 itineraries. I could only speculate the positioning of the Magic and Wonder after April 2014 as there was a gap on the original Jamaica Port calendar between May and November. With the latest changes to the port calendar, we now have some dates to analyze. PAJ43-12 returns to the port calendar on May 14, 2014 and returns every other Wednesday for 13 calls through October 29, 2014. Still looking at the current 7-Night Western Caribbean sailings from Galveston, it could mean that Jamaica is swapped with Costa Maya on Wednesdays resulting in Galveston/Sea/Sea/Grand Cayman/Jamaica/Cozumel/Sea itinerary, or a different itinerary altogether.

The calendar becomes a bit unclear mid November 2014 when the calls alternate between Wednesdays and Thursdays, including several back to back days. This could mean one of many things, but I’ll limit it to two scenarios. First, the ship could be in port past midnight, and it is just the way the port calendar shows ships based on the arrival and departure times. Another possibility is that the Magic could also be calling on Jamaica from Miami.

Looking at a two ship scenario solves the mystery of Wednesday and Thursdays (this also makes PAJ43-12 a generic Disney Cruise Line placeholder for either ship). Looking at the Thursday calls from December 4, 2012 through mid May 2015, there is a call every 7 days. This would likely fit into a 7-Night Western Caribbean sailing on the Magic.

At the same time by ignoring the Thursday dates, the pattern that was started in May 2014 of calls every other Wednesday continues for the Wonder.

If you search for a Caribbean cruise beginning September 2013 from Galveston, you will see this itinerary map. The itinerary itself does not reflect the change, but yet another indication he website is being updated ahead of a new itinerary announcement. 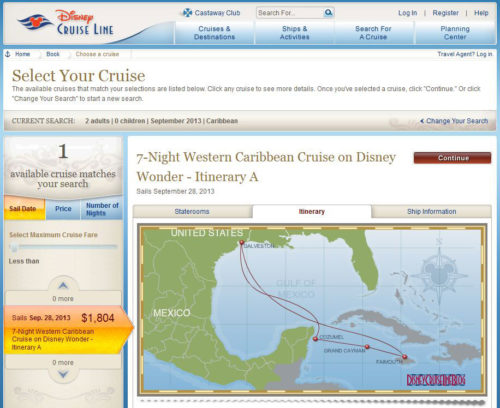 A day after Disney Cruise Line announced the addition of Jamaica, the port calendar was updated today to show the Disney Wonder in 2013.  The dates match the previous PAJ43-12 listings.  The 2014-2016 dates still show PAJ43-12, but once Disney Cruise Line releases 2014 itineraries I expect those to flip as well.  Credit should go to the Port of Jamaica for using a code name in place of the ship name, but after today’s update it  is all but certain for now that PAJ43-12 = Disney Wonder and possibly the Disney Magic. 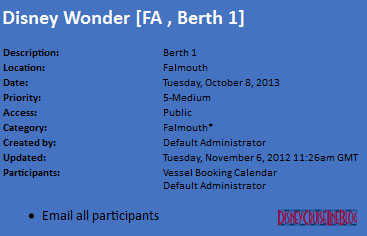 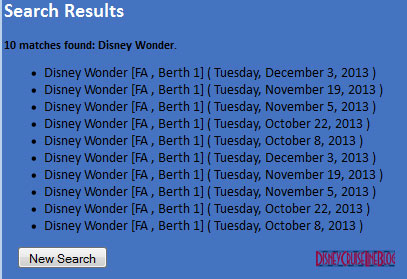 The 2014 itineraries were released and PAJ43-12 was in fact a general place holder for multiple Disney Cruise Line Ships.  Specifically, the Wonder, and Fantasy.
What do you think about these scenarios? Likely or Unlikely?