Join Hades and his silly sidekicks, Pain & Panic, as they set out ona wickedly funny quest. Along the way the dynamic duo teams up with some fo Dinsey’s favorite Villains in a music-filled comedy that is sure to tickle your funny bone.

Villains Tonight! begins as Hades and his faithful sidekicks, Pain and Panic (Hercules), welcome new souls (the audience) to the Underworld. But instead of a frightening realm, guests will discover that Hades has turned the Underworld into an upbeat and happier place. The lively fun comes to a halt when The Fates arrive and predict that Hades will lose his position as Lord of the Underworld if he doesn’t ramp up the evil factor. 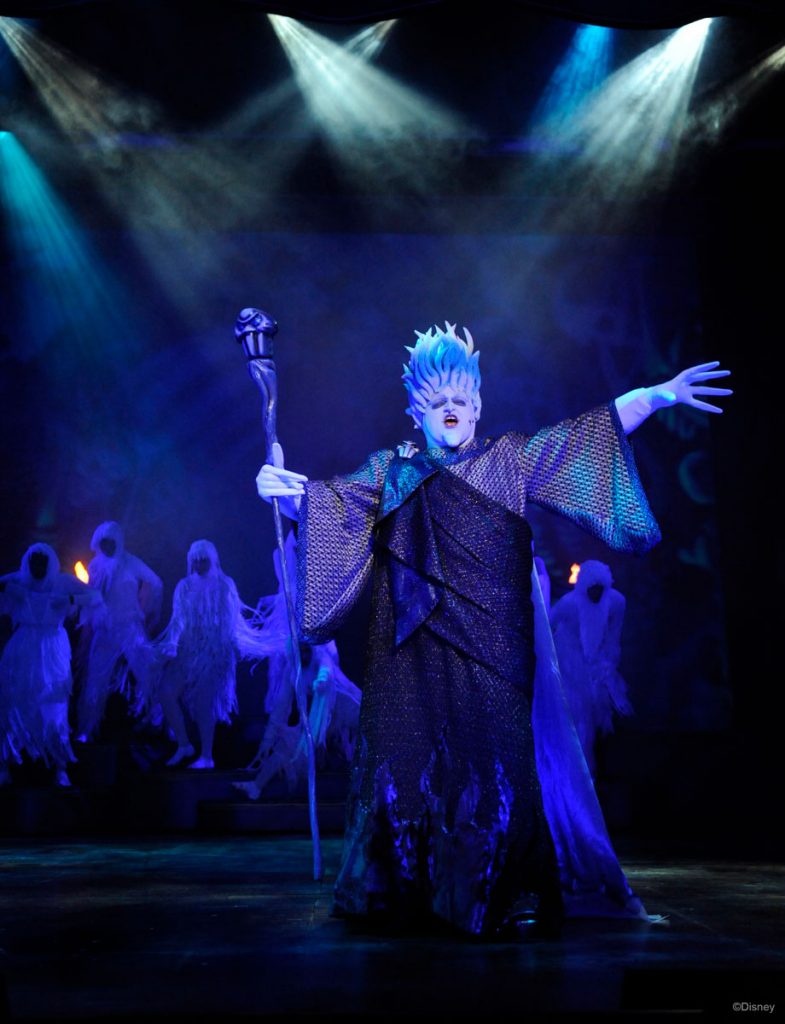 Worried by the news, Hades checks his Evil-O-Meter and discovers it is running dangerously low. So he comes up with a plan: He’ll conjure up the very best of the worst – the most powerful Disney villains – to help him replenish the world of evil. What ensues is a comical journey as Hades, Pain and Panic embark on a quest filled with wacky antics and amusing musical numbers featuring everyone’s favorite Disney villains and their sidekicks. 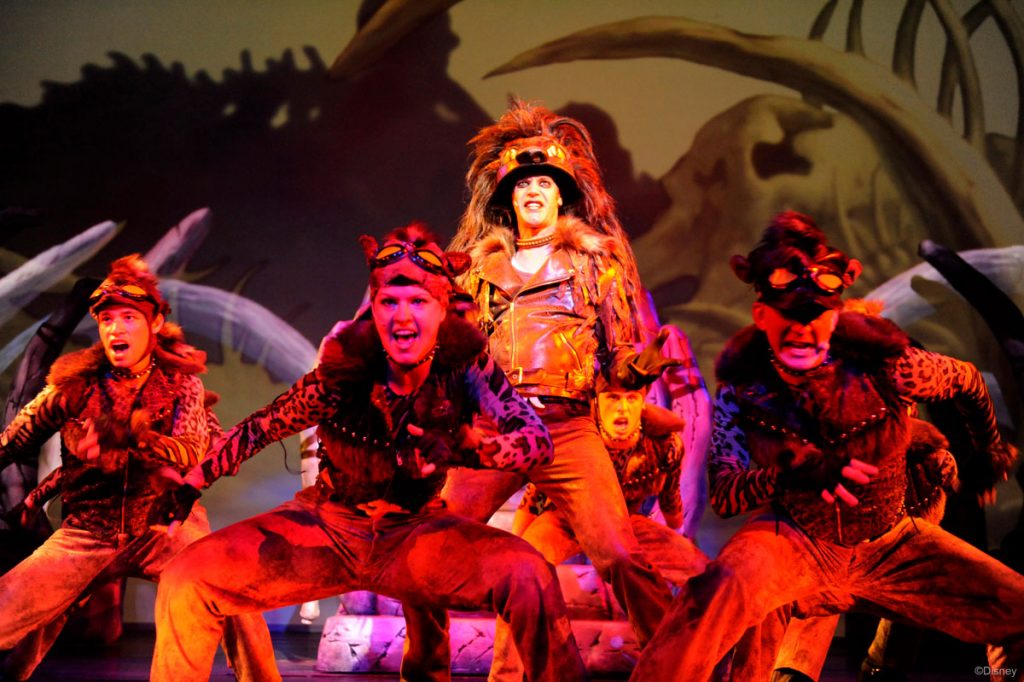 The show features a veritable “Who’s Who” of Disney villains and sinister sidekicks. This musical extravaganza features pyro-technique wizardry, light-and-sound illusions and clever shape-shifting costumes. It took many years and a throng of production talent to bring it to the stage successfully. 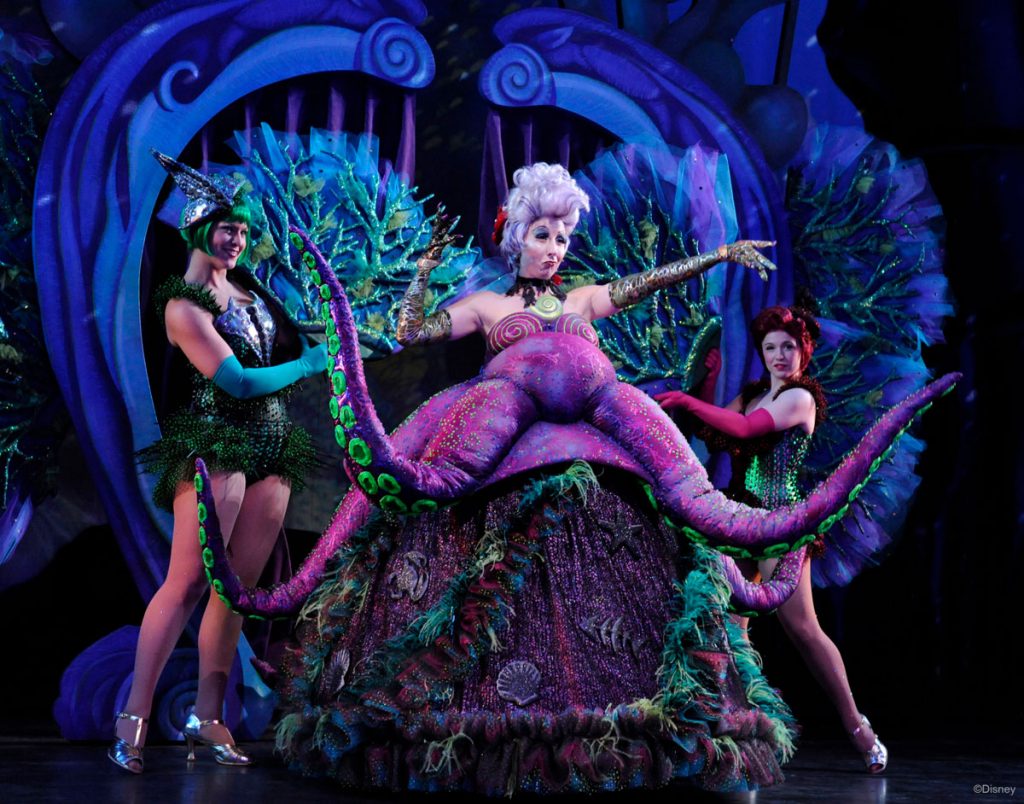 Boasting an all-star team, this show was created by such Broadway luminaries as Tony-nominated writers Hunter Bell and Jeff Bowen. Allison Narver, a longtime industry veteran, directed and uber-talented Karma Camp did the choreography, with musical direction by the gifted Ben Cohn. The show was produced by Walt Disney Imagineering Creative Entertainment.

This show has 10 no-holds-barred musical numbers. You’ll be introduced to 8 new retro takes on classic Disney Villain tunes, including a disco-inspired rendition of “Poor Unfortunate Souls” from The Little Mermaid and a dance-club version of “Cruella De Vil” from 101 Dalmatians. Plus, 2 original songs created especially for the production: “Welcome to the Underworld” and “Villains Tonight.”

So, go ahead—sing along! It’s a spectacle of scoundrels, elaborate exploits and musical masterpieces. 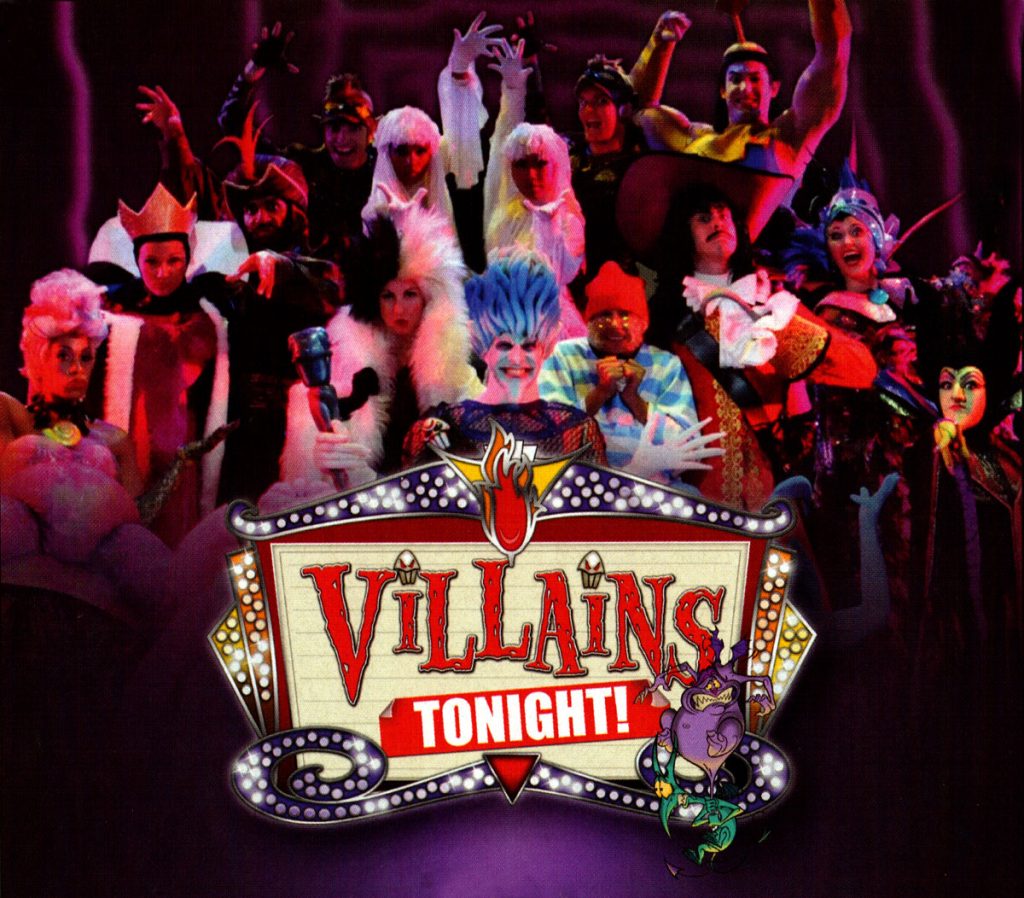 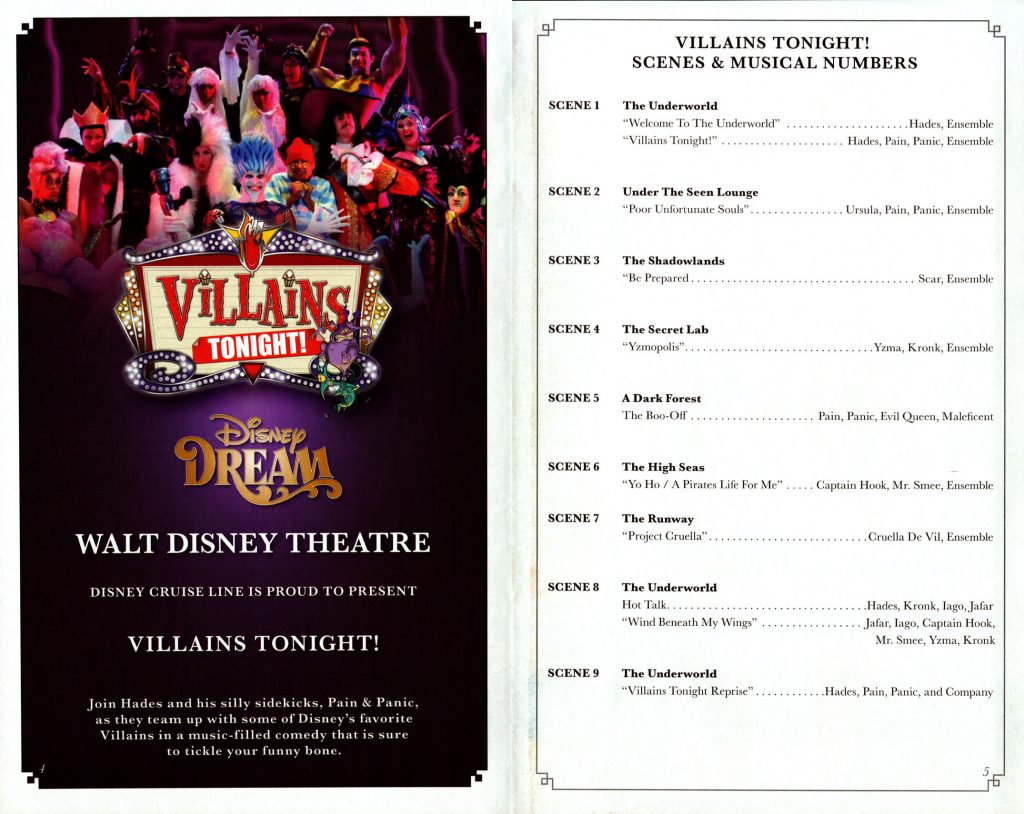 SCENE 2 | Under the Seen Lounge

Below is a video recording of the Villains Tonight! as presented on the stateroom TV

The curtain closed on Villains Tonight! for the final time on August 7, 2017 aboard the Disney Dream. During the time before Beauty and the Beast debuted during the November 6, 2017 voyage, this evening of the cruise was filled with a screening of Disney’s Newsies the Broadway Musical in the Walt Disney Theatre. During the 2017 Halloween on the Hight Seas voyages, this spot was filled with The Nightmare Before Christmas Sing & Scream.