Disney Cruise Line’s terminal at Port Canaveral will be undergoing a significant renovation ahead of the launch of the new LNG-fueld cruise ships. During the October 31, 2018 Port Canaveral Board of Commissioners meeting renderings were shared while discussing the port’s current capital projects. 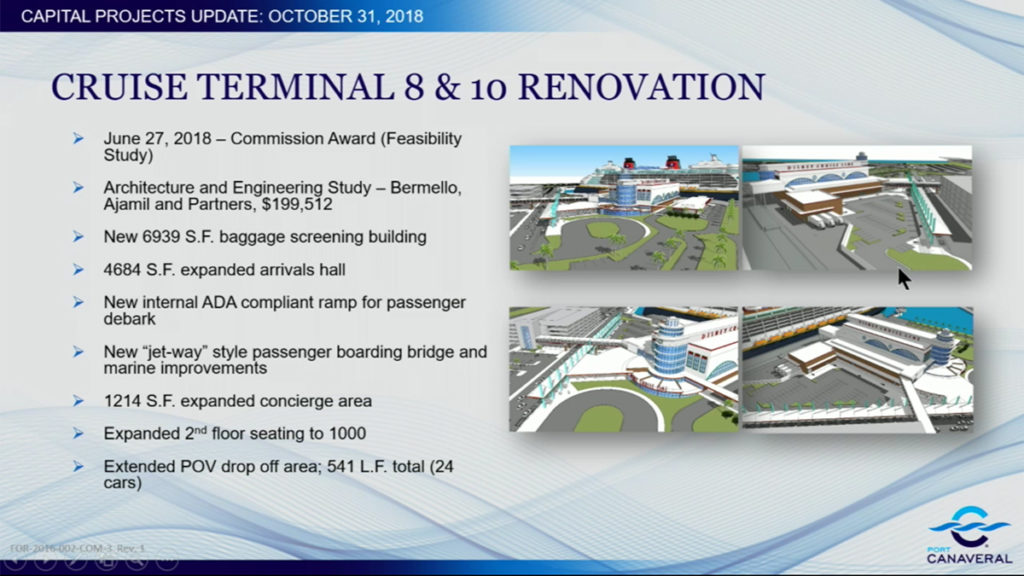 Renovations talks for cruise terminal 8 (CT8) have been in the works for some time now, but this is the first we are hearing details. During the June meeting Port Canaveral said it working with Disney Cruise Line on a robust expansion of Cruise Terminal 8 along with a variety of additional enhancements to bring the terminal up to date.

The expansion will include a new baggage screening building, an expanded arrival hall, a new ADA compliant ramp for passengers, along with a new jet-way style passenger boarding bridge.

The just under 7000 square feet baggage screening area on the north side of the terminal will decrease the available parking in the preferred parking lot.

The expansion of the arrival hall will add an additional 4600 square feet to the front of the terminal. This is the area where passenger security screening occurs upon arrival to the terminal.

The expansion will increase seating in the terminal from around 380 seats to 1000 seats. The seating will be lounge style with USB charges. The concierge space in the terminal will also be expanded by over 1200 square feet.

The renderings below show the significant exterior changes to the terminal which last saw a major renovation over 20 years ago for the launch of the Disney Magic. 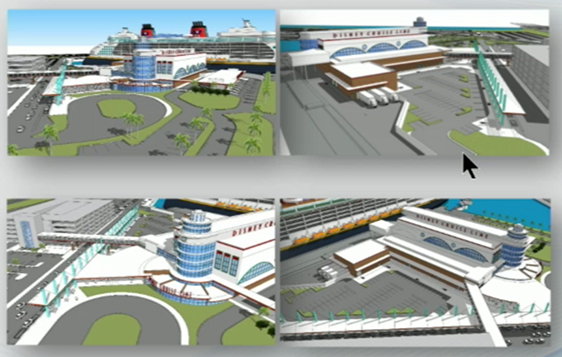 Port Canaveral hopes to finish substantial work on Cruise Terminal by May 2020 to allow for Carnival to shift over. This shift will then allow the port to begin the major renovation stage of Cruise Terminal 8 which will effectively close the terminal for a couple of months. As of today’s meeting, Cruise Terminal 8 is slated to be shut down for May, June, and possible early July 2020. In the past, renovations has taken place on days when a ship is not at the terminal, but due to the scope of this expansion the terminal will need to be offline to allow contractors to work uninterrupted.

The port will utilize nearby cruise terminals such as Cruise Terminal 10 for the period of time when Disney’s terminal is offline. The overall Cruise Terminal 8 construction expansion project is slated to begin at the end of 2019.

Below is an excerpt of the meeting discussing the expansion plans for Cruise Terminal 8.

Disney Cruise Line has been driving the renovation plans with the port and feasibility studies are still in the works. With that said, it is important to keep in mind, the renderings and bullet points mentioned are not final. The port estimates the expansion to be a $43 million project and may be pushed to $50 million based on renovations to Cruise Terminal 10.