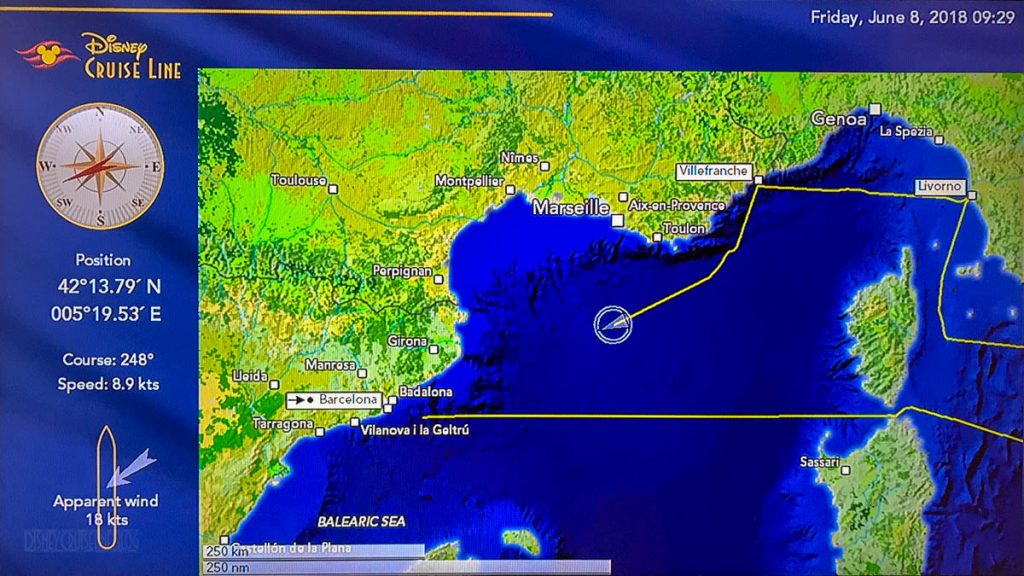 Our final day has come and it started in the gym followed by a hefty dose of espresso from the Cove Cafe. 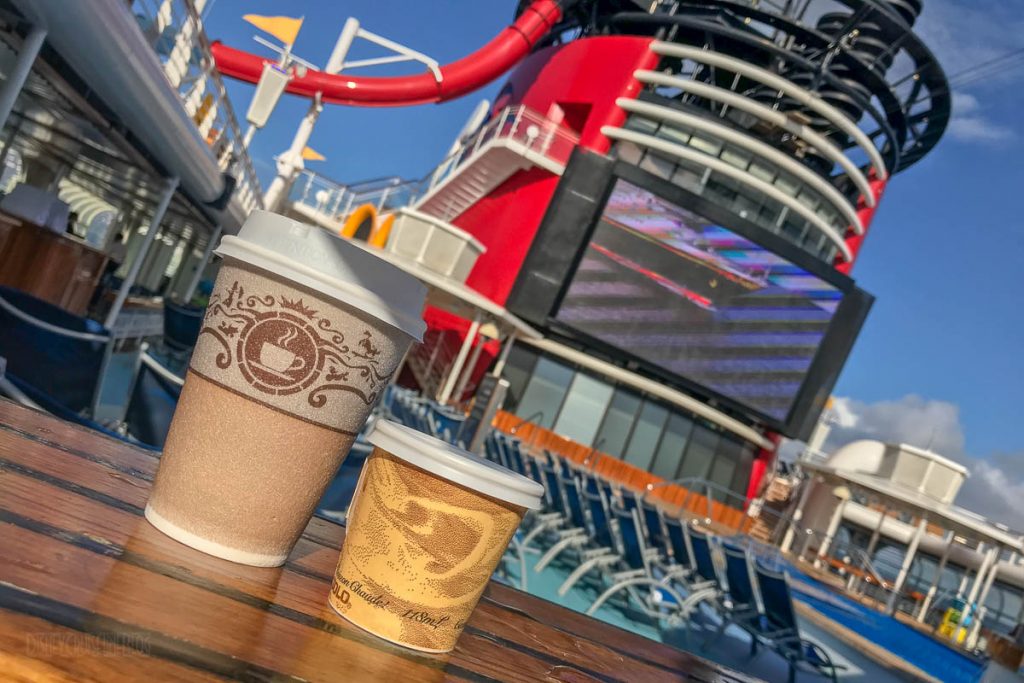 There were two ideas for today; either hang out at the pool or activities around the ship. It was Isabelle’s choice and while the weather was great, the air temp helped her make the decision to skip the pool and do activities around the ship. Emily noticed the Bloody Mary and Mimosa cart at the Quiet Cove on her way to meet Isabelle in Cabanas following the gym. The cart offered a selection of items to add to the Bloody Mary, but nothing over the top like a pork chop. 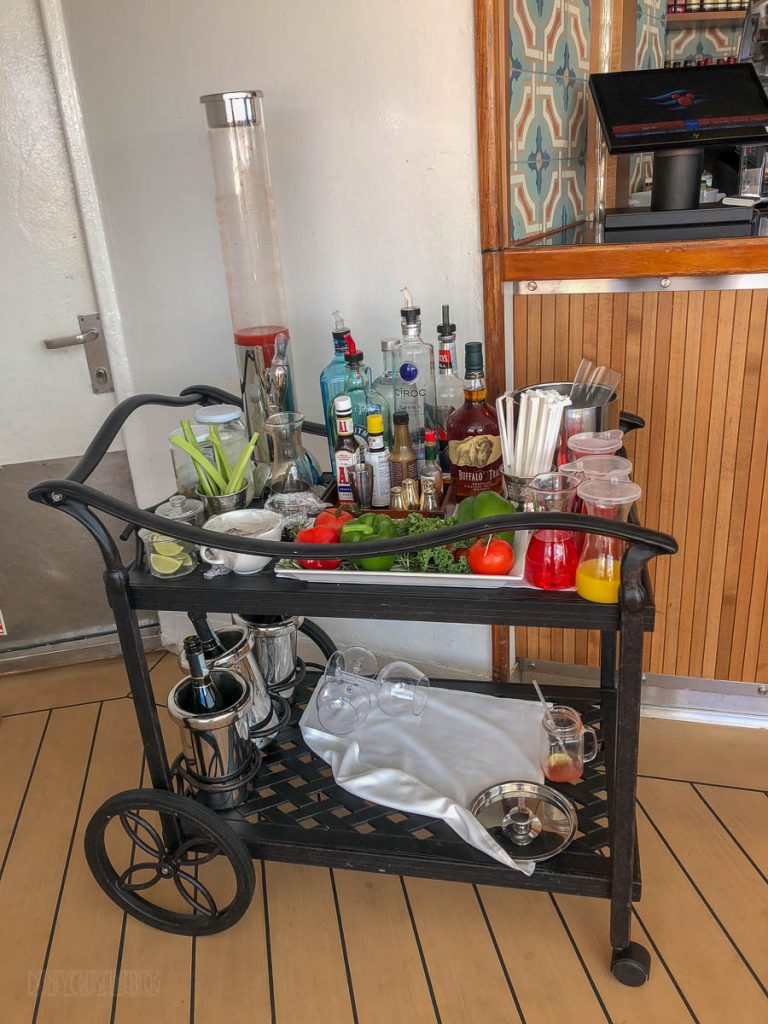 The aft deck of Cabanas offered a peaceful spot to enjoy breakfast. The seas were calm and really were calm the entire cruise. This was such a port intensive cruise we used the ship as a hotel and not an resort with amenities. This was primarily the reason Isabelle wanted to skip the pool. We were off the ship for so long each day we never had much of a chance to do much onboard. 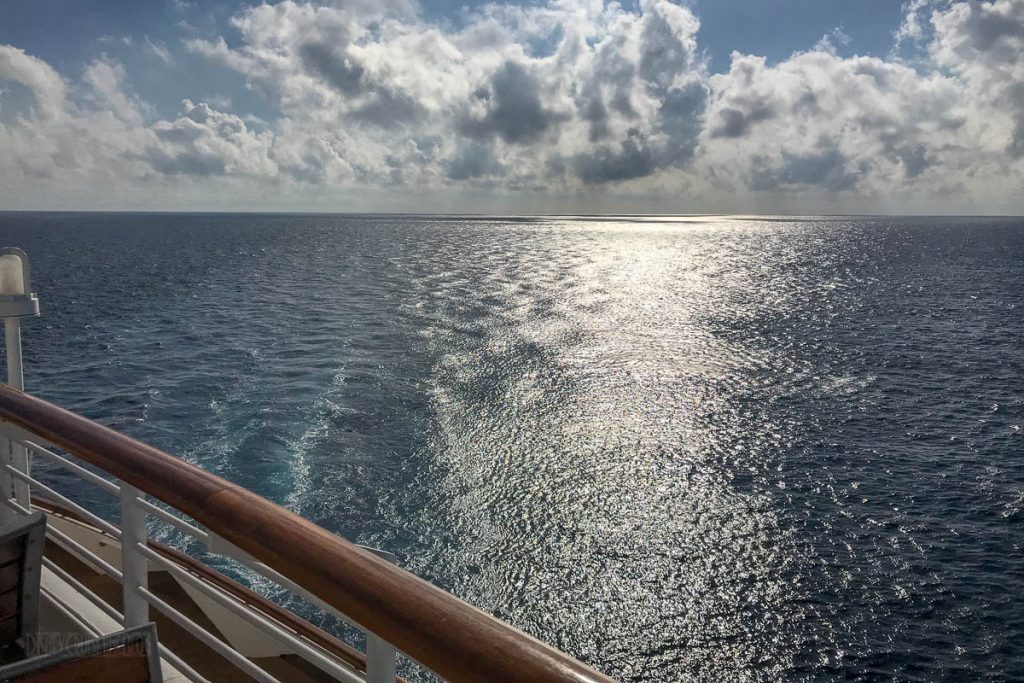 The morning started off with back to back sessions of Disney trivia and origami in the Promenade Lounge. 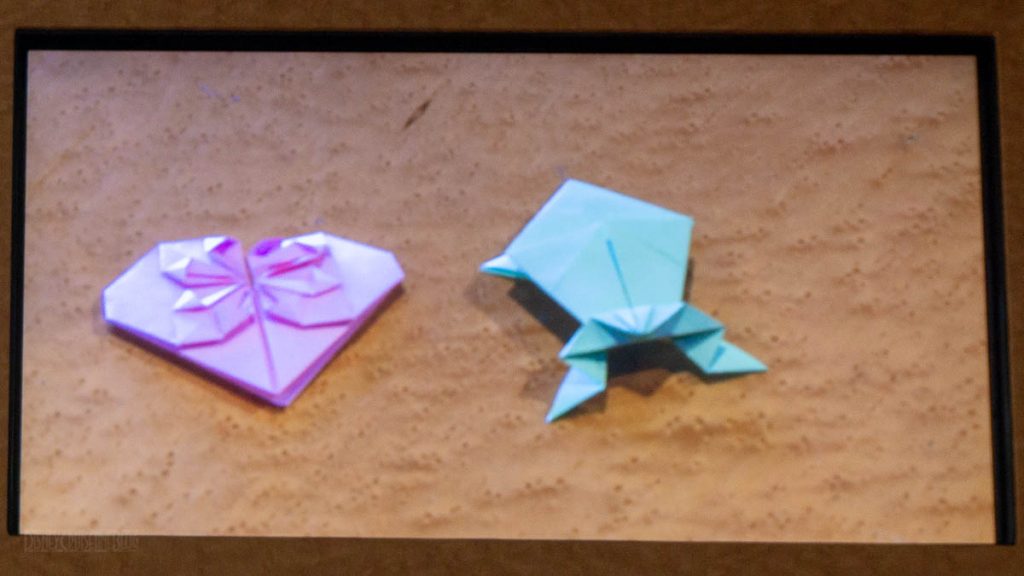 Before moving to our next location, O’Gills for a round of movie quotes trivia, Emily ordered from that thing we are no longer speaking of and scored a Cloudy Bay Sauvignon Blanc. Tisa does not play around when it comes to trivia, the topics seem easy, but the reality is, these are not easy questions. I’m not at all complaining, it is refreshing that the questions are not as easy and there have been fewer and fewer perfect scores to the point where 17/25 points is winning. 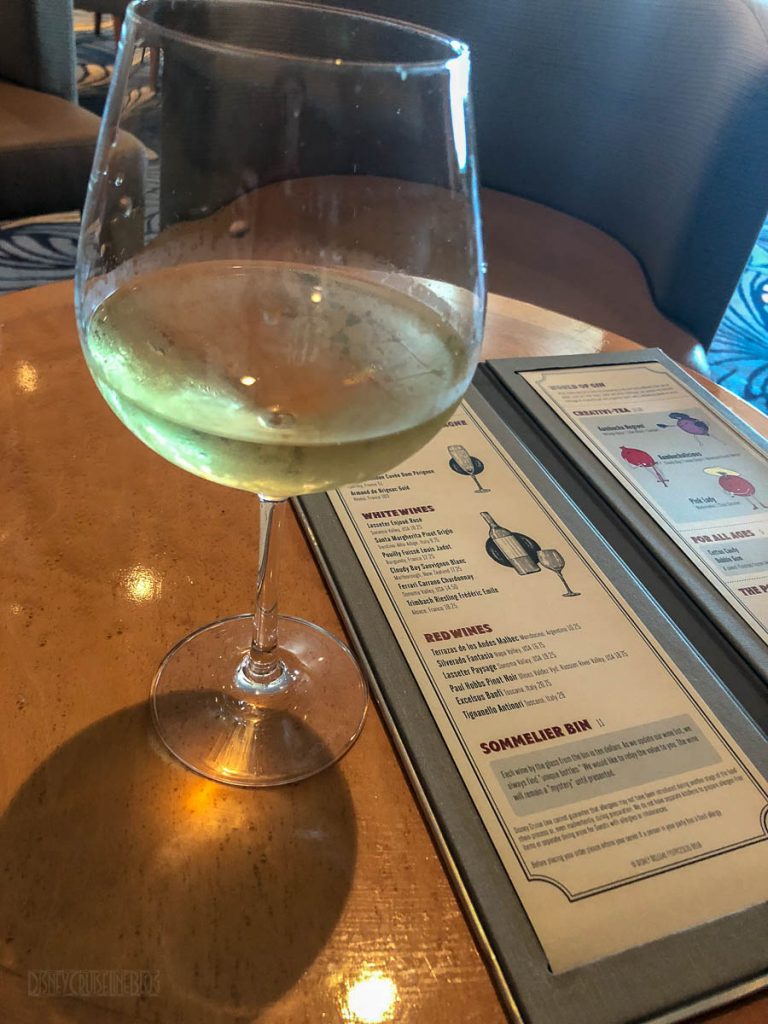 After a morning mostly trivia, we made our way to the pool deck for lunch. I walked through Cabanas, but nothing really jumped out at me. I joined the rest of the family with shawarma and a slice of pizza. Originally, the plan was to eat the leftover pizza we made in Naples, but I never put it in the stateroom fridge… After sitting out for a few days, I wasn’t willing to take a chance given the fact I’m no longer in college  where the shelf life of unrefrigerated pizza doesn’t exist and the thought of being ill with a day of flying ahead of me, I opted to toss it in the trash. I should really be thanking Emily and really our fantastic stateroom host, Vicky, for making me think about this objectively before doing something stupid. However, I’m fairly sure I committed a crime by wasting the leftover pizza.

A small consolation was yet another unique offering from Pinnochio’s, a zucchini and olive pizza. Also, Emily and I both laughed when the ordering shawarma from the Duck-In Diner and the cast member warned us the sambal sauce was hot after we requested some. Emily was like ‘yeahhhhh load it on please.’ 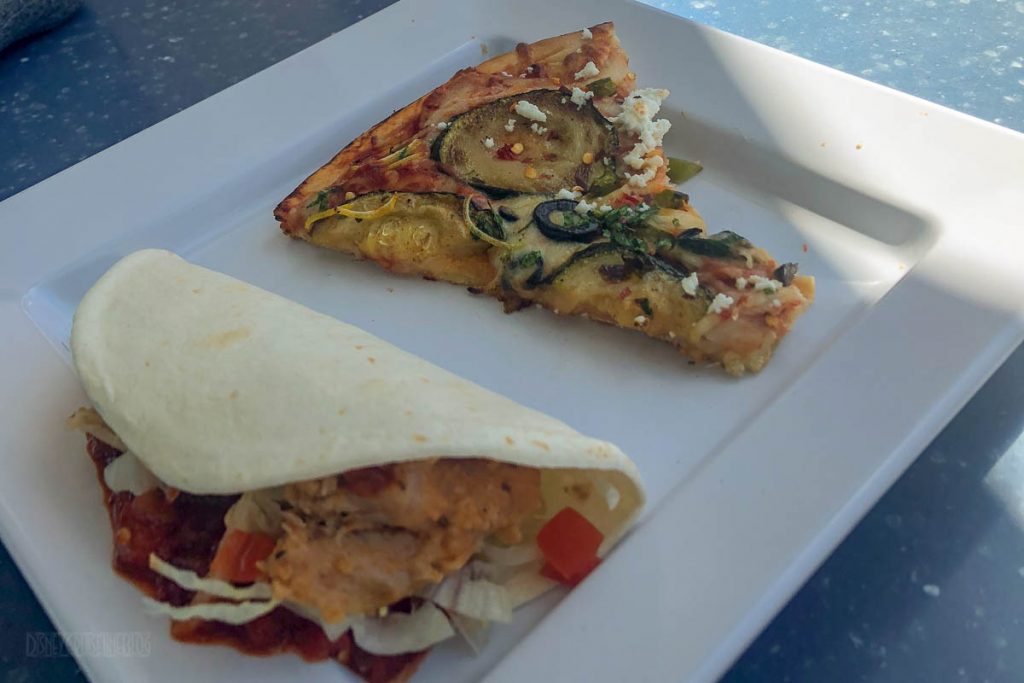 Emily paired her lunch with a Cloudy Licious  from Signals. The cocktail features Cloudy Bay Sauvignon Blanc, Jasmine White Tea, and Belvedere Peach vodka in a refreshing drink that goes well when sitting around the pool & is not sweet. 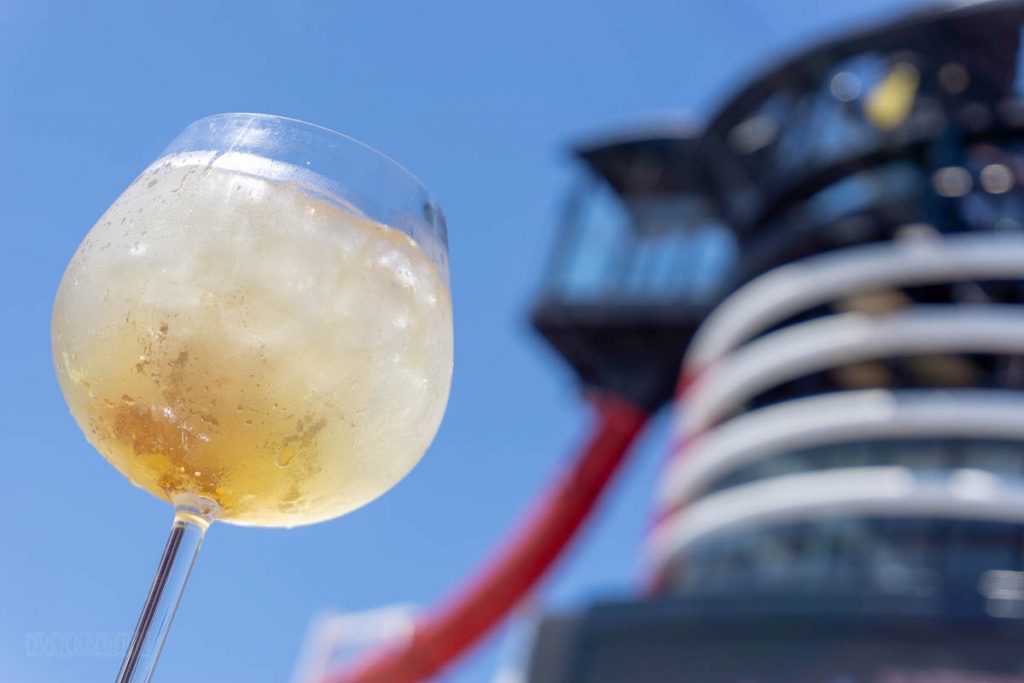 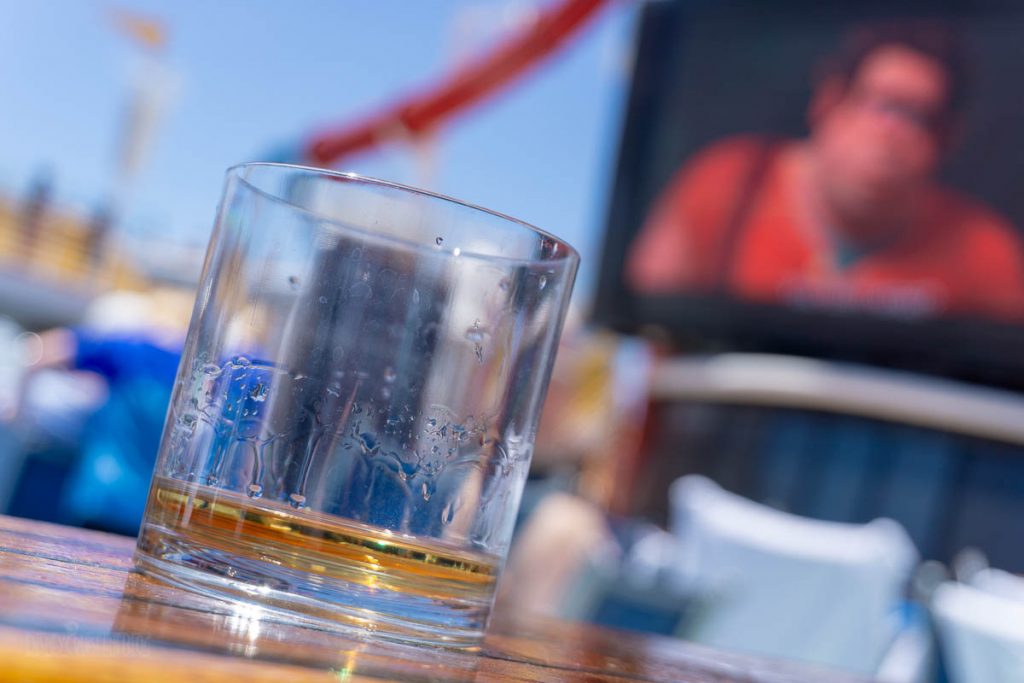 We enjoyed our lunch and drinks at a poolside table watching Wreck-It Ralph until Isabelle decided she wanted to go hang out in the Oceaneer Lab. This is her second cruise with access to the tween club EDGE, but she still prefers going to the Lab where she can do crafts.

Emily and I headed over the the Quiet Cove, a place where do not spend much time which is great considering this means Isabelle still wants to hang out with us. No need to rush to the years. This afternoon the Quiet Cove was not living up to it’s name. I am not joking, it was louder than Goofy Pool, which was full of families and the movie on Funnel Vision. Em ordered the Craggy Range (Te Kahu Hawkes Bay from New Zealand) and we quickly retreated back to the family pool to watch more of the movie. 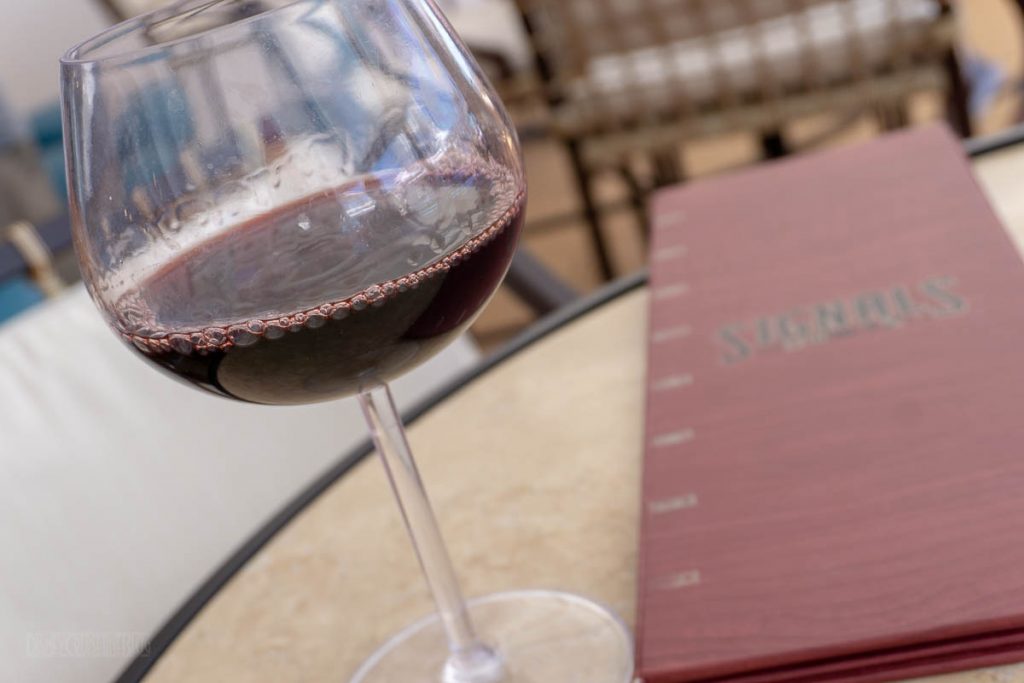 Isabelle and I were not onboard with the next scheduled event, SOLO: A Star Wars Movie. Neither of us were all that excited to see the film, but Emily convinced us to go see it and we all really enjoyed it. I am a casual Star Wars fan, but as was the case with Rogue One, I had a good idea of what the movie had to accomplish going in. I found the film to be quite enjoyable and I’d rank this up there as maybe my 5th favorite in the franchise with the original trilogy and The Force Awakens. I’m glad I saw it & actually would like to see it again. 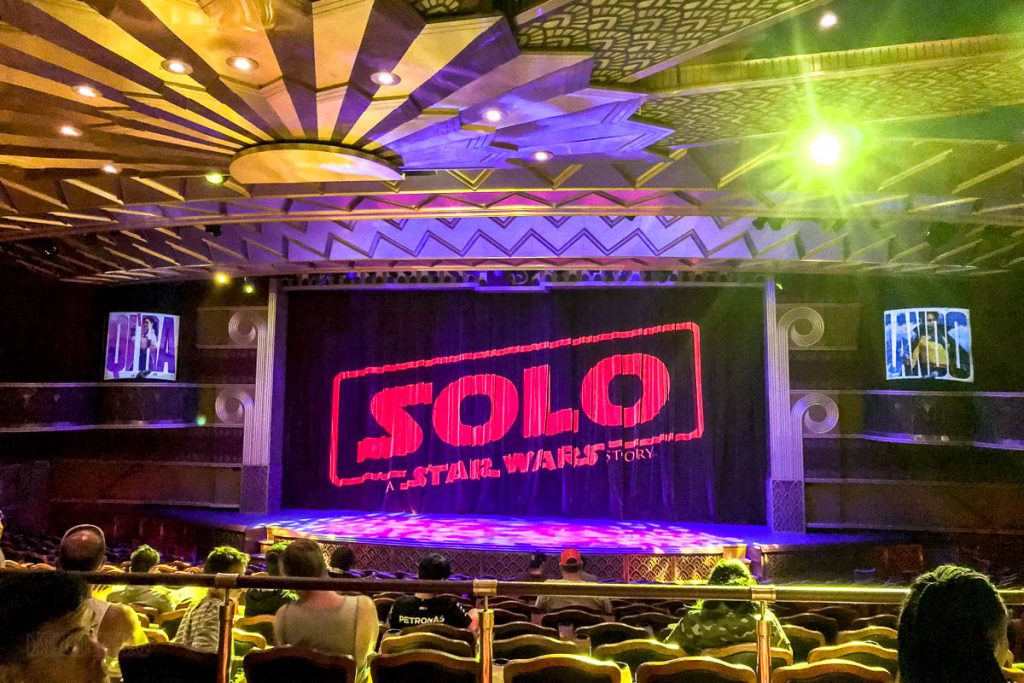 After the movie, we returned to the stateroom to get a little packing done to free up some time in the evening after dinner. Our final dinner of the cruise was Animation Magic at Animator’s Palate, where each guest gets to draw a character on their placemats and see them magically come to life on the screens towards the end of the dinner seating. Isabelle ordered the salmon, one of the three items along with chicken and steak found on all the menus each night. It was prepared nicely, but bland which was to be expected given it part of the standard menu fare. The baked potato was downright delicious. 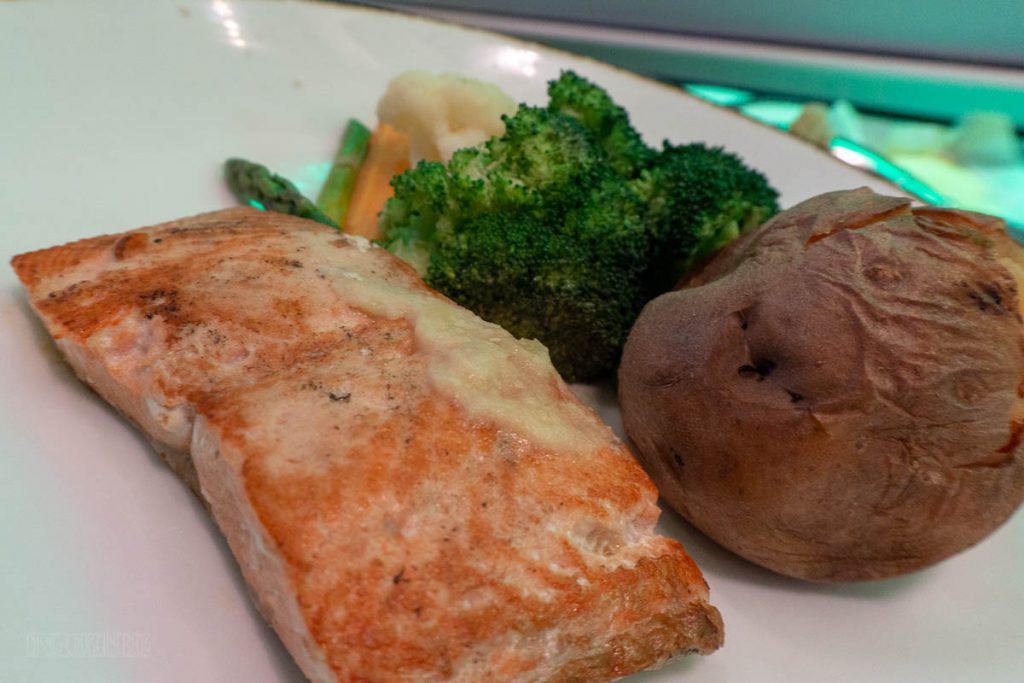 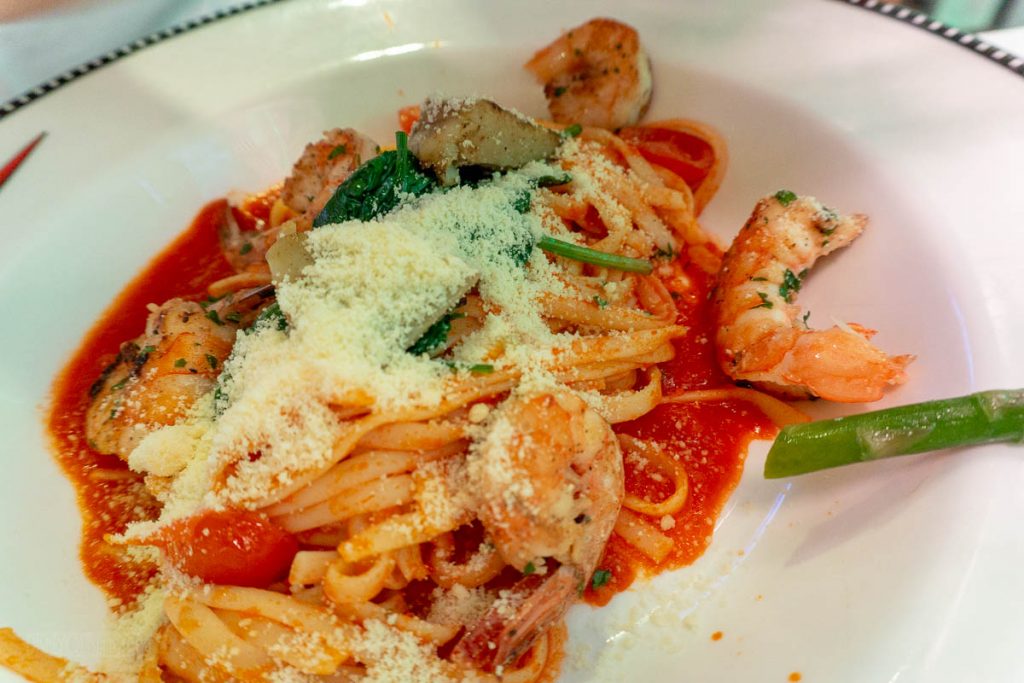 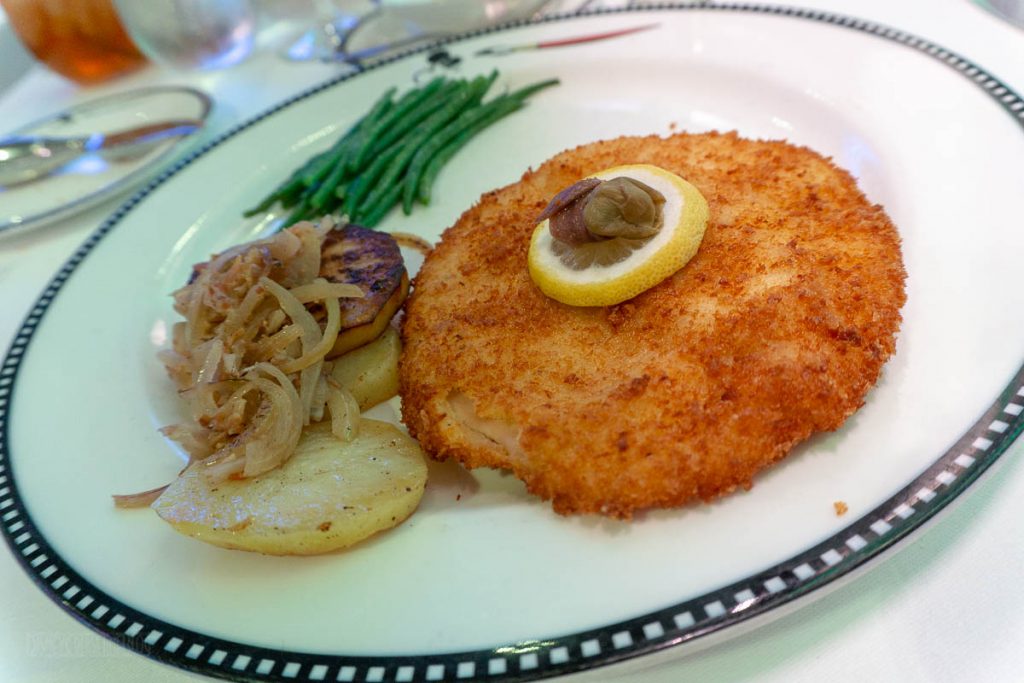 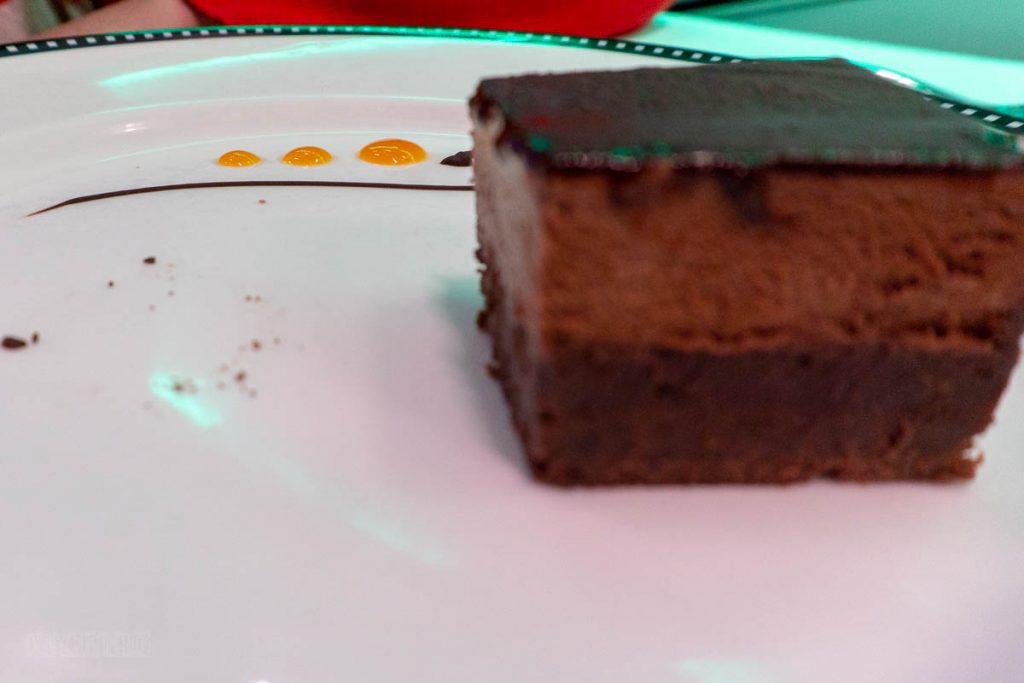 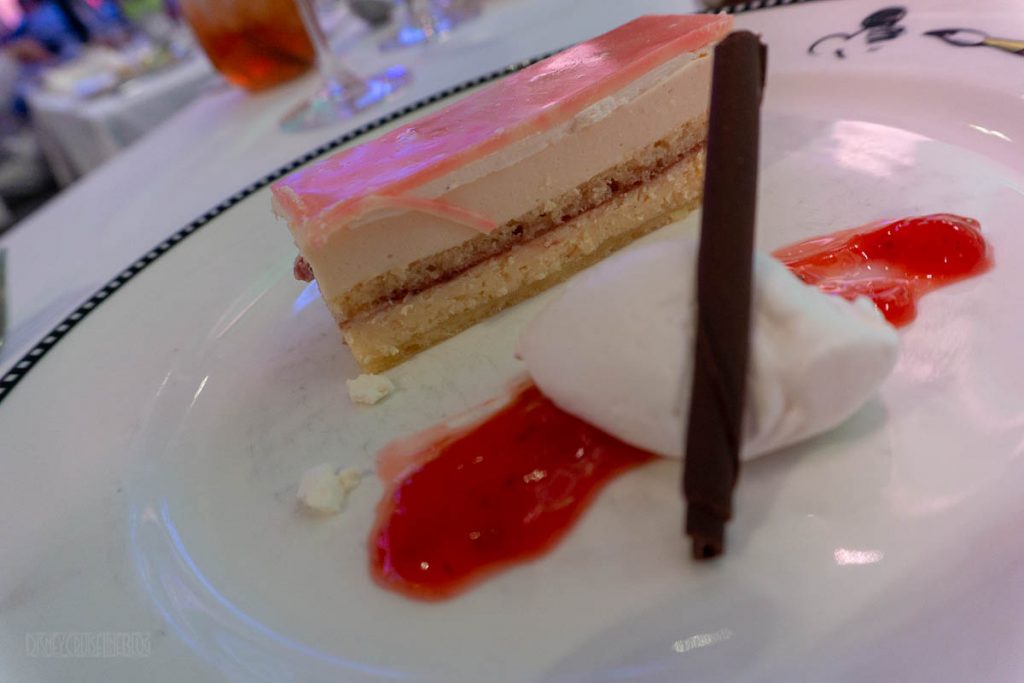 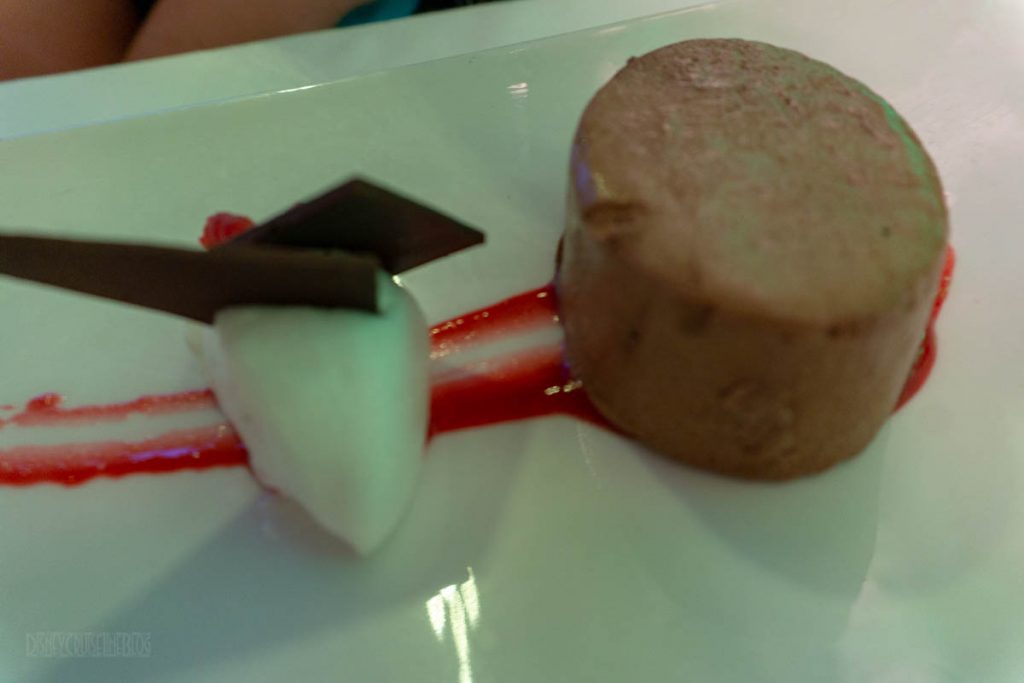 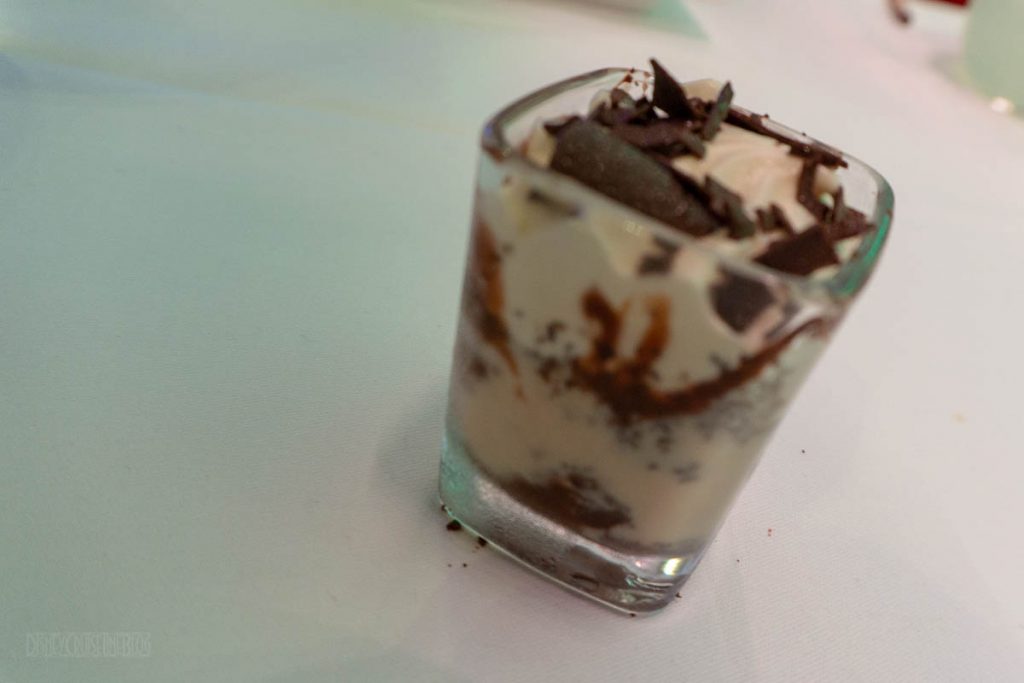 Following dinner, we split up again. Isabelle went for her last hurrah in the Club and we briefly stopped in the Promenade Lounge before deciding to go check to Keys. Tonight was a reverse of the previous night – the Promenade Lounge was packed and Keys was empty. We said hello to Carlos and headed to Keys. I was eager to try something new to me from the Bourbon Cart. Emily scored once again snagging a glass of the officially unofficial Champagne of the DCL Blog, Taittinger! 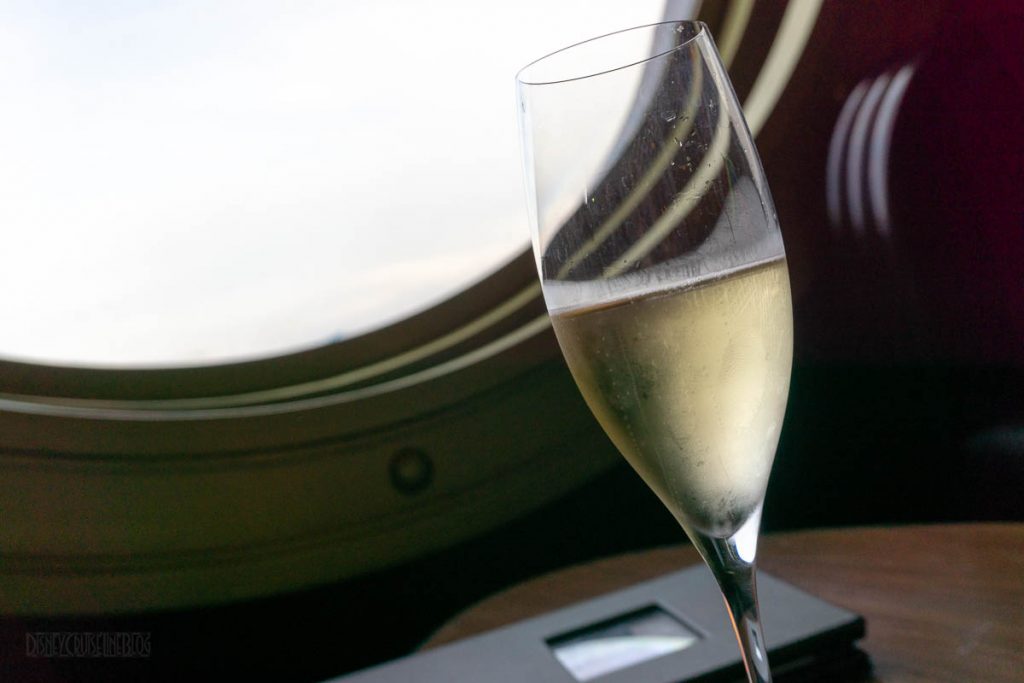 After pursuing the offerings on the Bourbon cart, I ordered a single pour of Blood Oath Part No. 2. 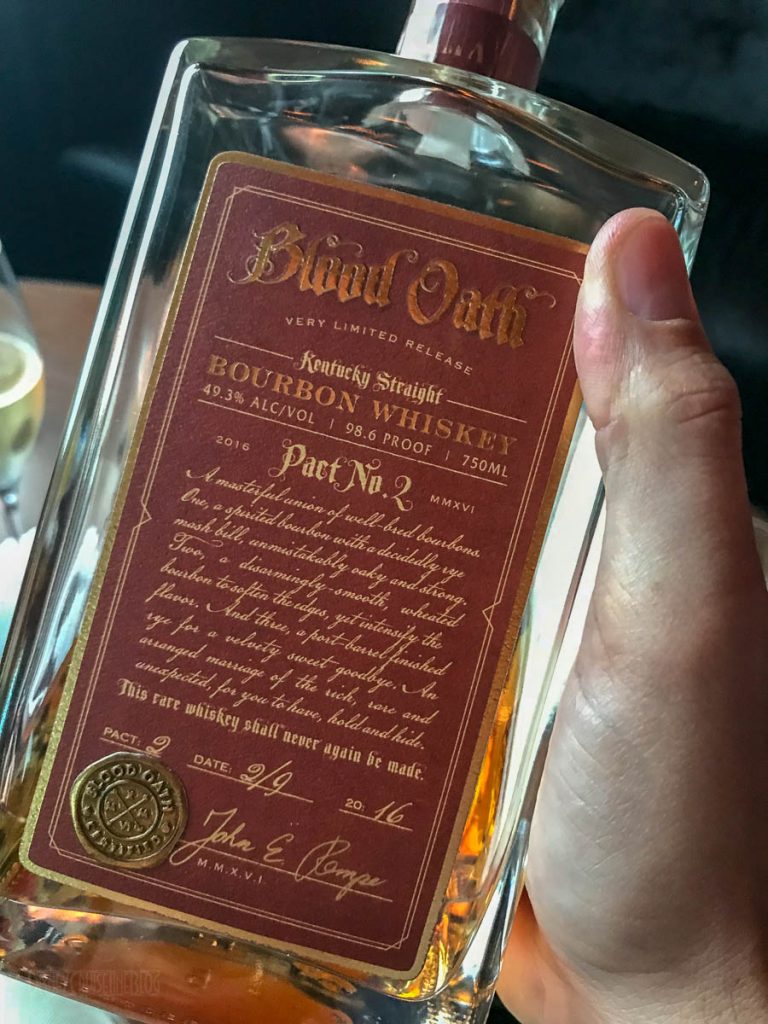 Pact No. 2 was a delicious and was dangerously smooth. I quickly realized that this was not going to be a bottle I would easily find, but I was able to score a bottle of Pact No 4 from our local Total Wine location the first day we were back home. I haven’t opened No 4 to compare, but if it is anything like No. 2 then it will be a bottle to ration wisely. 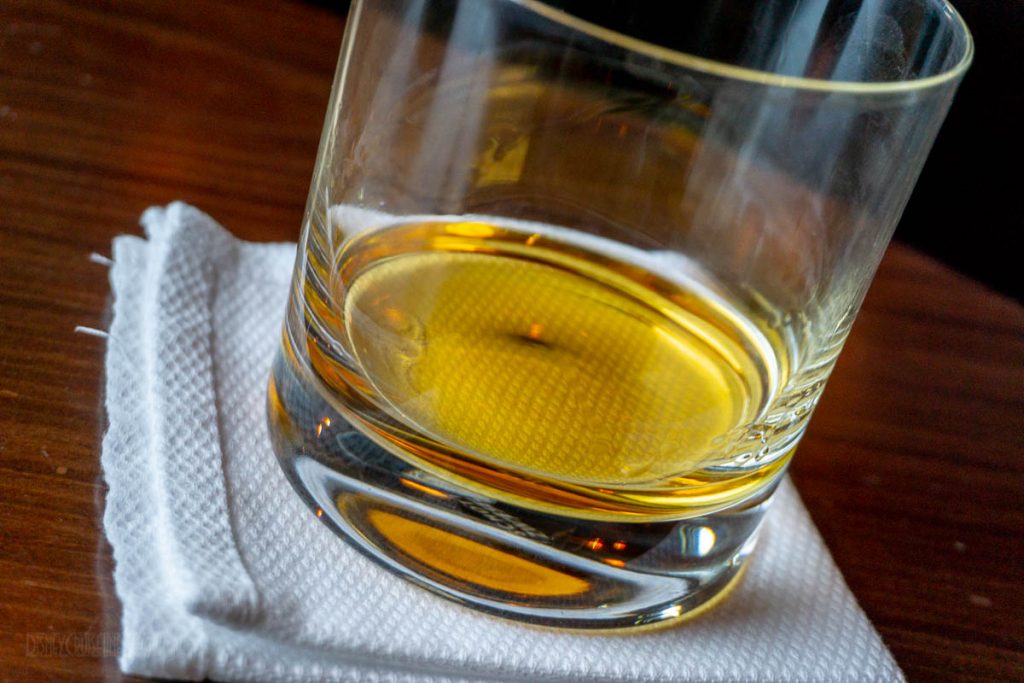 I would suggest asking about the price of each pour if you are at all concerned about ordering something crazy expensive. They did not have a price list available and I think I was too enamored by this specific bourbon after reading the label I was going to try it regardless. I was relieved when our bill arrived and it was only $22, I would have figured based on how good it was that it would be at least $35.

We returned to the room to finish packing and put our luggage out in the hall. Emily completed the guest comment card and got the VAT form ready for tomorrow before we called it a night on the final evening.

Trip log, day eight. Debarkation and a long day of flights back to Orlando.
June 9, 2018 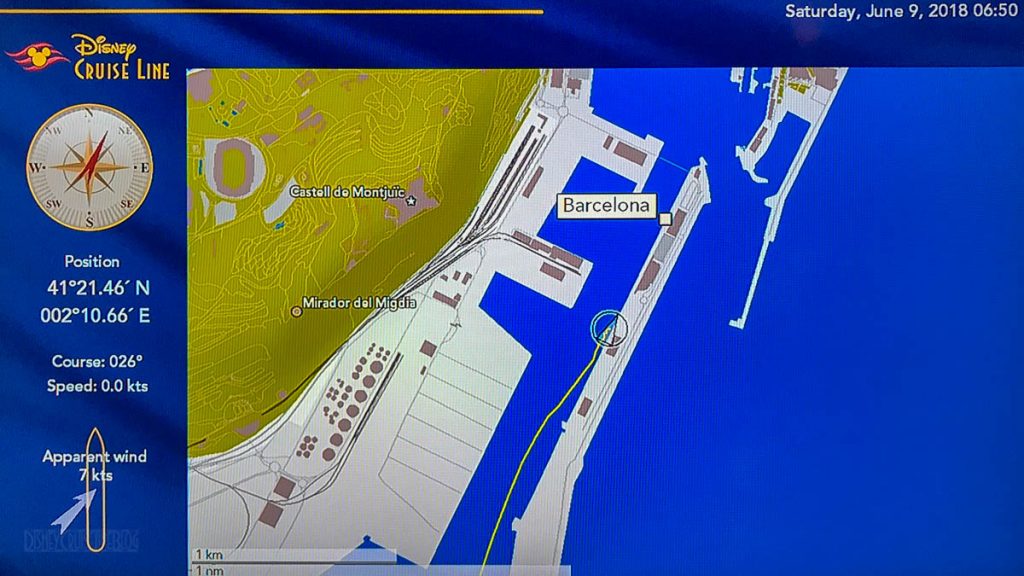 We normally skip the rotational Sea Ya Real Soon breakfast because it is just easier to go to Cabanas and besides, with early dining the first breakfast seating is usually too early. We have time before our first flight, so a casual breakfast in Cabanas is our preferred option on debarkation days.

When we arrived early on embarkation day, we saw a long line of people waiting for taxis, so we planned for the worst and wanted to be in line no later than 8:15 AM. We were running ahead of schedule so we departed the ship around 7:45am, and it was a breeze. We didn’t have to go through customs or any other document checks at the terminal like you’d encounter at Port Canaveral. Luggage was easy to find in the terminal and the taxi line was non-existent for smaller parties. There was a backup for larger groups and those with a lot of luggage. By 8:20AM, we were at the airport thanks to very little traffic. If you are wondering, best case from the Port of Barcelona to the Barcelona Airport (BCN) is 15-20 minutes if there is no traffic. I wouldn’t plan for this because it took us nearly 25 minutes to go from the airport to our hotel (which was a 2 minute taxi ride from the cruise terminal).

Once we were all checked in and through security, we stopped at the Tax Free Refund booth to get a refund on our VAT. It was a simple process that DCL made much easier by providing all the necessary documentation. We were given the option to get the refund in Euros or have it put on a credit card. 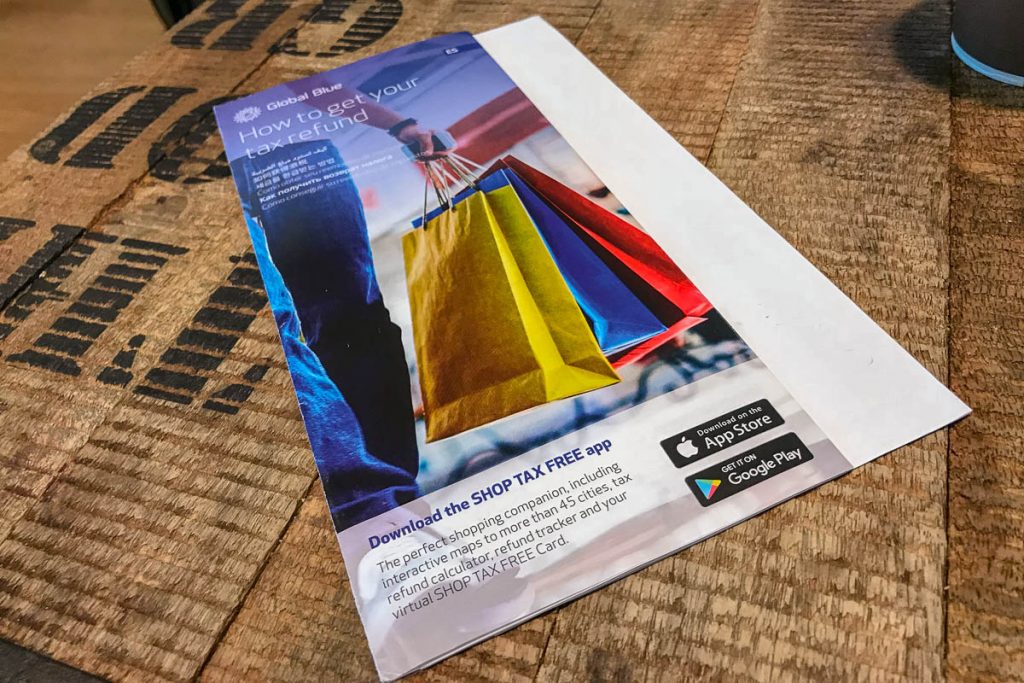 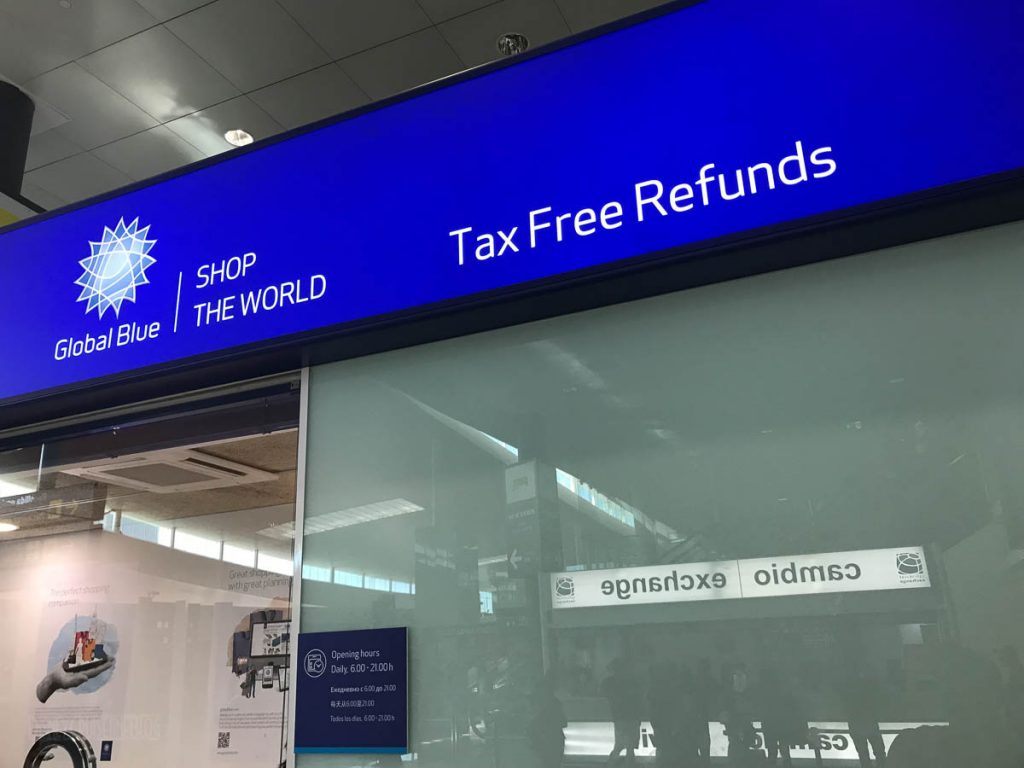 Emily is amazing at finding great deals on our flights, but that usually means we have multiple stops and today was no different with three flights: Barcelona to Paris, Paris to Boston, and Boston to Orlando. Our first flight was behind because it arrived late, and then in Paris, there were no ground crews available so we had to circle around the tarmac before getting to our gate. Thankfully, our next flight was delayed back 15-minutes, but it was till going to be really really tight. Thankfully, we saw Brian pictured below from Air France with an iPad and our flight number for the transatlantic flight to Boston. It turns out between two planes, there were nearly 20 of us late into Charles de Gaulle Airport (CDG) booked on the flight to Boston and this guardian angel was there to expedite and effectively Fastpass-ed us through both passport checks and got us to our gate as a group. We were blown away by the Air France handled this situation ensuring we all made the connecting flight by holding the flight and guiding us to the gate. There is no way we would have made it without Brian’s help. 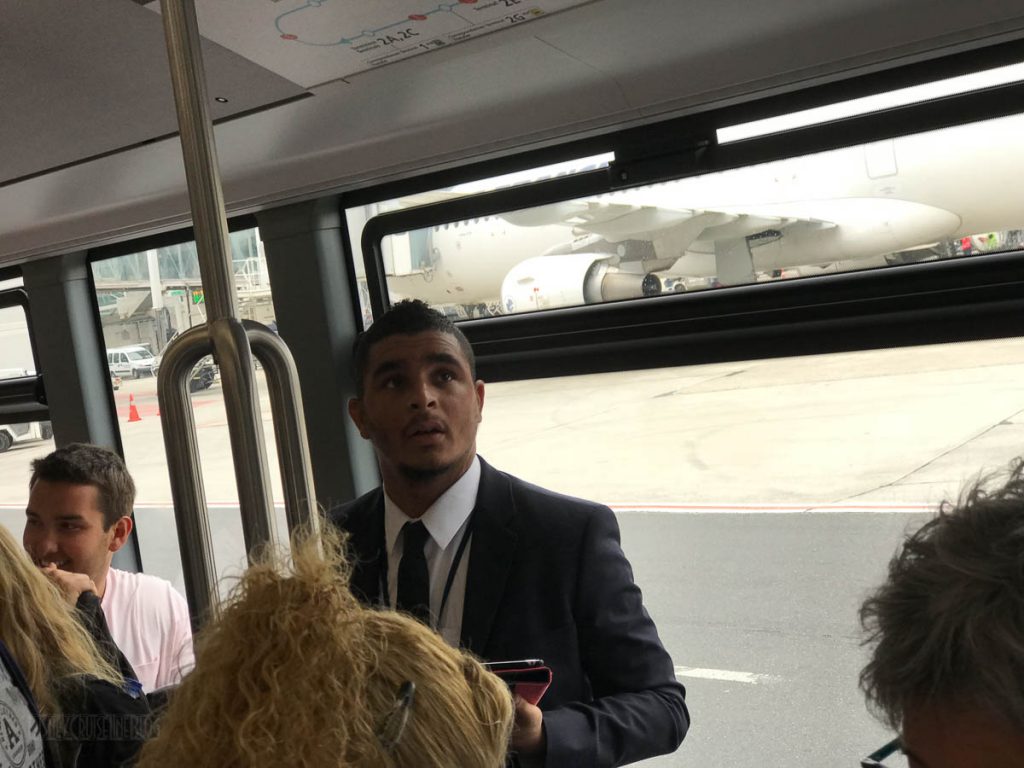 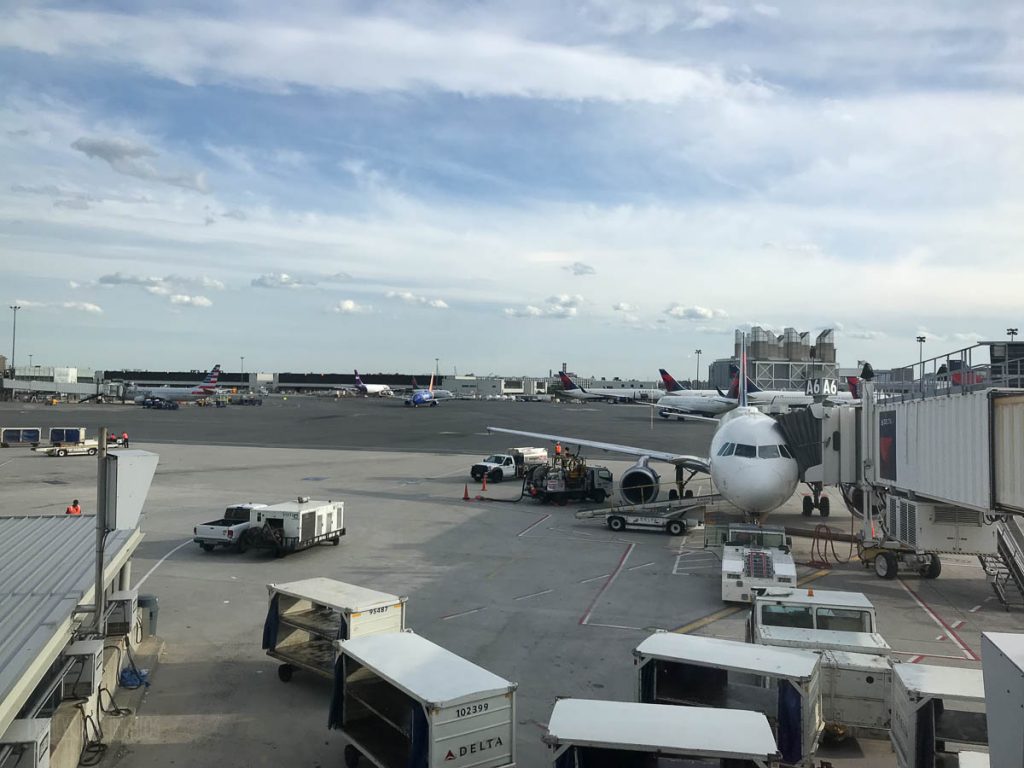 We made it to Boston, and had time to spare. Our final flight from Boston to MCO was less than 1/2 full, and it was a great trip. We arrived in Orlando around 10pm with all of our luggage. We were very thankful for the trip & getting home safely. This concludes our daily trip reports from this cruise. I still have some more to share in some individual posts & we will be doing a family podcast on it as well. Thanks again for following along!