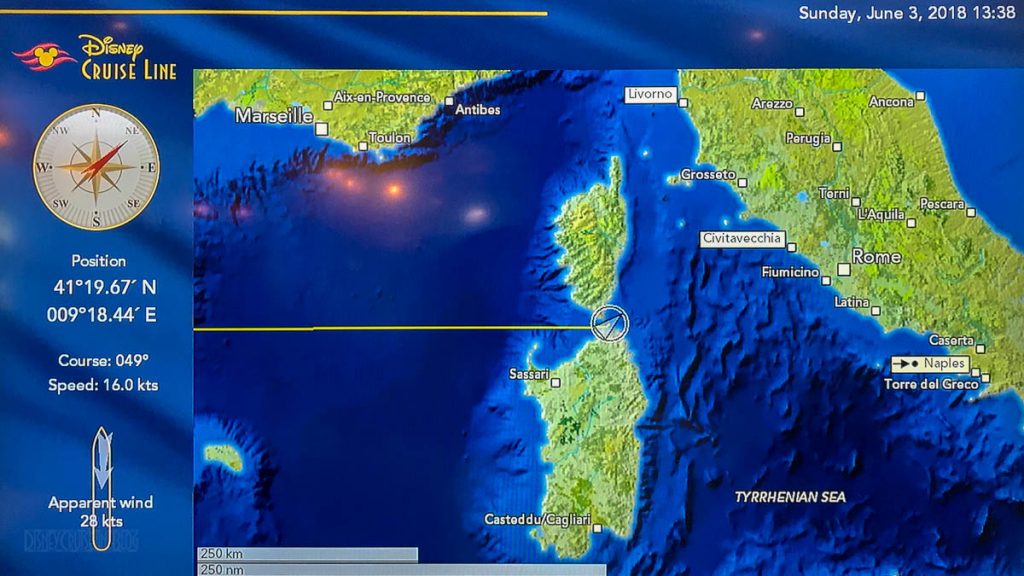 On the first full day of our 7-night Mediterranean cruise, we are spending at sea sailing east to Italy. Emily and I hit up the gym and then met Isabelle at Cabanas for breakfast.

Not much was really on our to do list for today besides hang out on the upper decks. We were in our lounge chairs on the upper deck before the pools even opened. Rather than sit and wait, Isabelle and I attempted to play ping-pong. Key word there is ‘attempted.’ It is very difficult to play ping-pong on deck 10 forward with the wind, even in the semi-enclosed area in front of the basketball hoop. We finally threw in the towel after spending more time chasing ping pong balls around the deck than actually hitting them back and forth.

By now, the pools were open and the first movie, Toy Story, was underway. I lost track of the time, but Isabelle spent the majority of Toy Story in the hot tub. The sun was out, but it is not nearly as warm as I was expecting it to be in the Mediterranean.  Thankfully, I found two blankets at the Quiet Cove to keep me warm on deck.

The morning and early afternoon were spent at the pool. Lunch was a mix of Pinocchio’s Pizza and shwarma from Duck-in Diner. Emily discovered butternut squash pizza at Pinnochio’s. I am fairly certain that Emily and I were the only ones who really appreciated such unique offering. Emily even went back to thank them for making something unique & not typical of DCL upper deck pizza.

Isabelle had a nail appointment at Senses Spa. I never would have guessed that Isabelle would be the first Sanders to have some sort of spa experience on the ships. 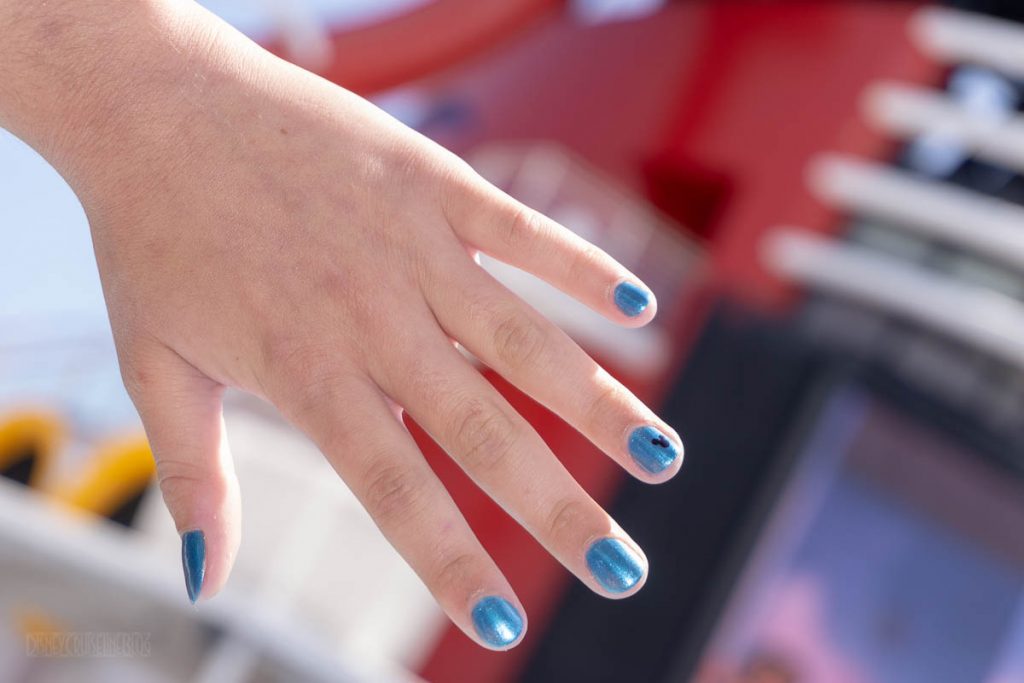 She told us she wanted to write a blog post on her experience. If that goes well, I may just retire.

After the third movie, Lilo and Stitch, we headed inside to see the John Kimmons, the magical ventriloquist’s performance in Fathoms. For a 2 o’clock show in Fathoms on a sea day, Fathoms was at 75-80% capacity. The show was enjoyable, but the guy from the audience stole the show. He was such a good sport which resulted in a great overall set. 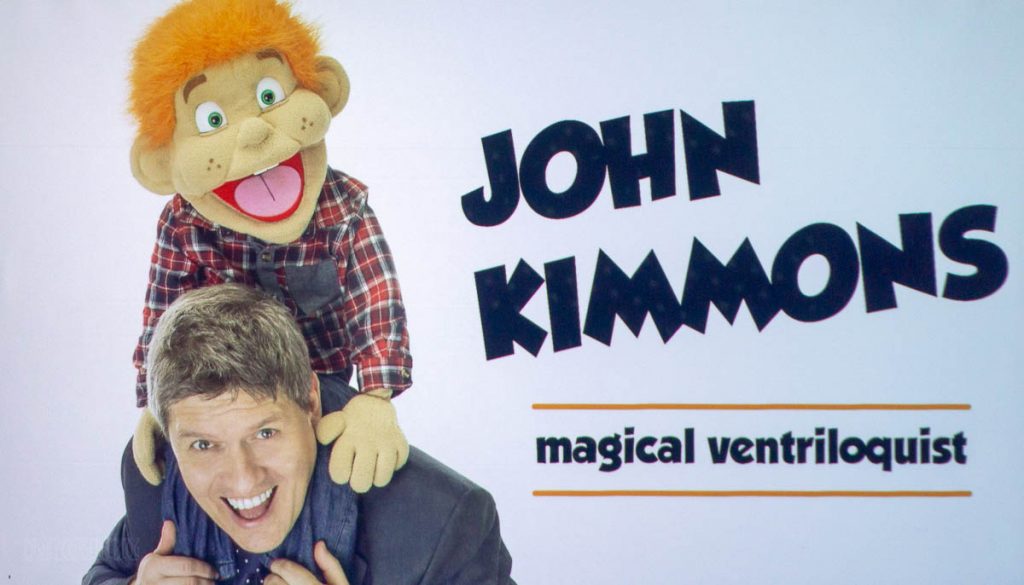 We ended up needing to do some laundry. This was our first time using the new laundry system where you purchase tokens from the main panel in the laundry room then redeem them at an available washer and dryer. 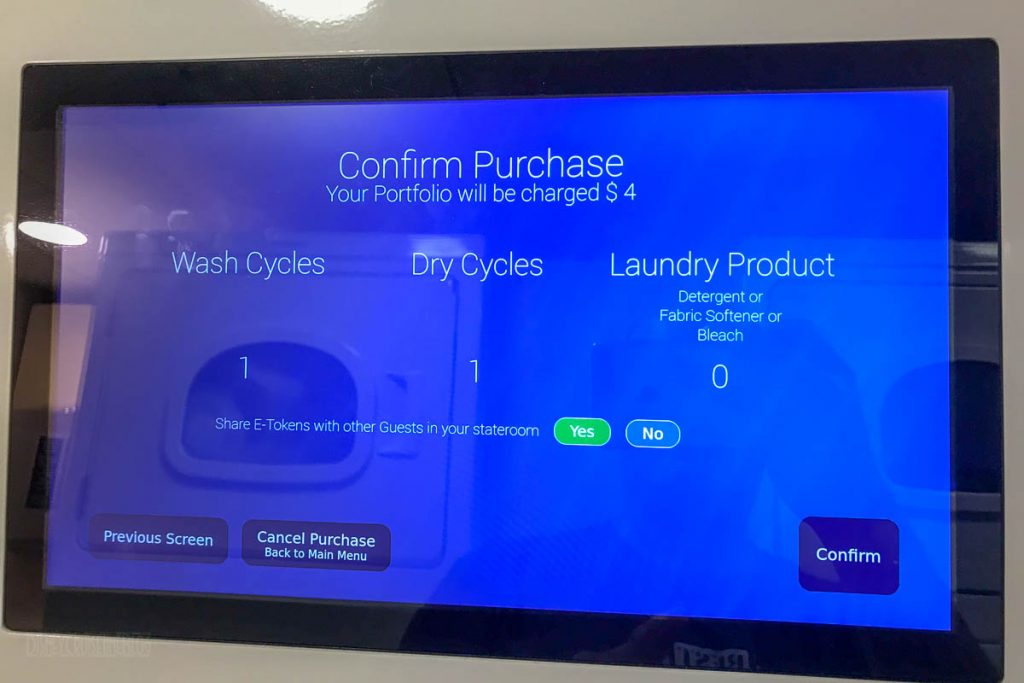 I thought it was really cool how you can share the pre-purchased tokens with every member of your stateroom. Additionally, any tokens not redeemed will be refunded at the end of the cruise. You do not really need to buy extra up front, I just purchased one wash & one dry cycle when I arrived, which then eliminated a step when I came back to dry them. This is also how you can purchase detergent. 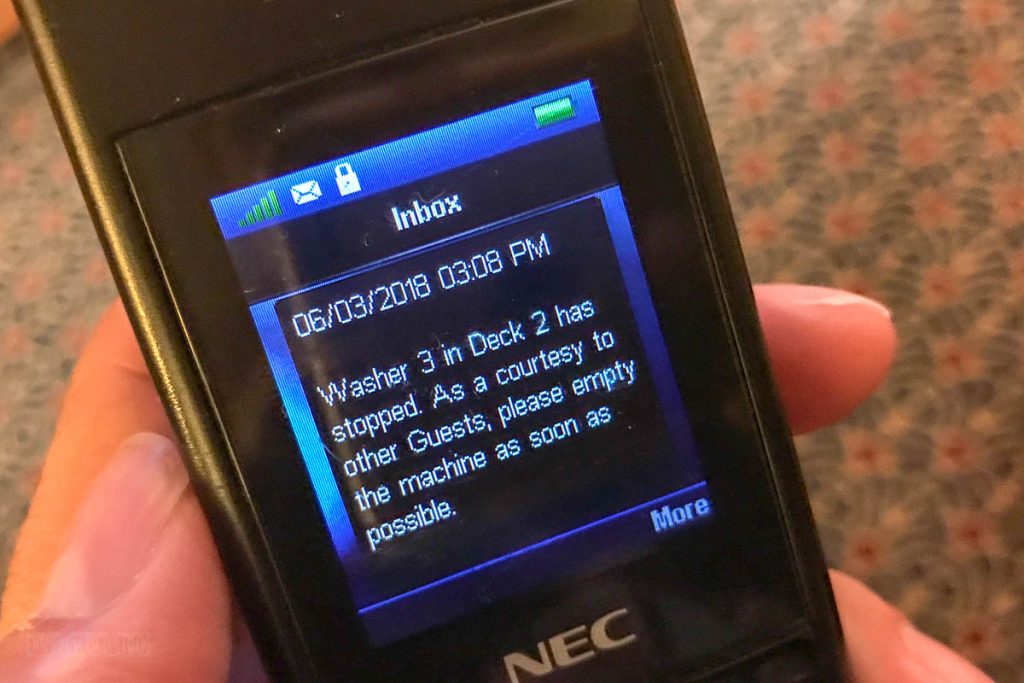 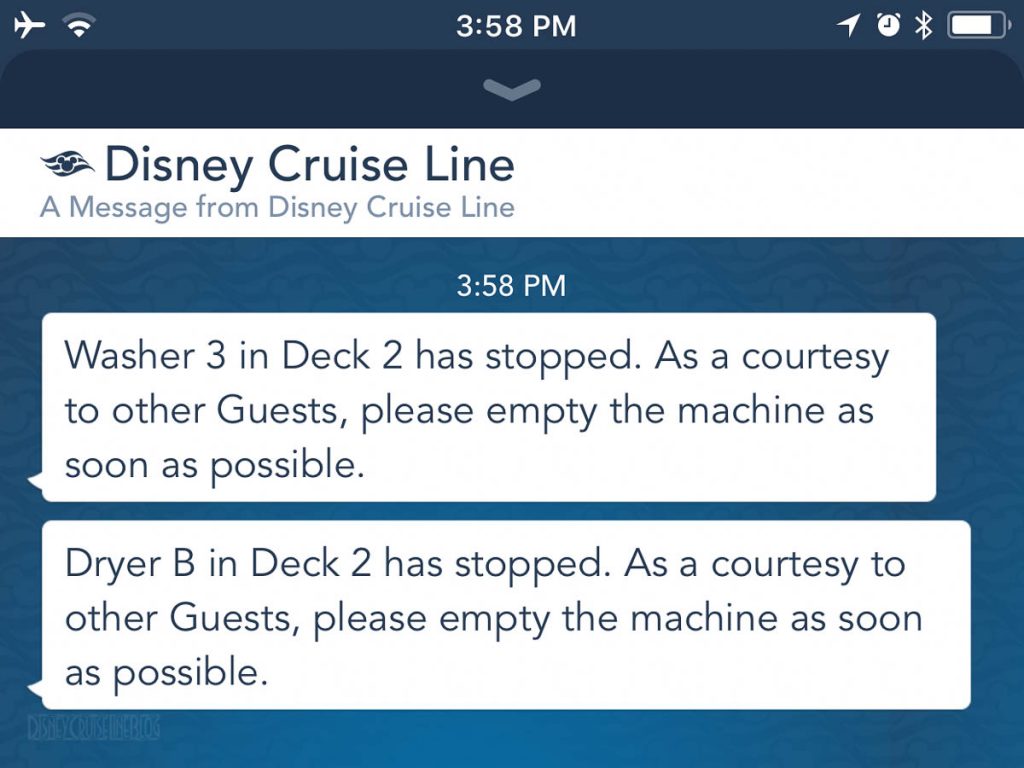 A new feature that should make life easier is the ability to get notifications on your Wave Phone and chat messages on the DCL Navigator App when the washer and dryer cycles are completed. I still kept a timer going on my watch, but this should eliminate those forgotten loads of laundry I’ve encountered in the past holding up the machines.

Tonight was formal night, so we made sure to arrive in time for the Captain’s reception in the Atrium. This is one of the few times where Disney Cruise Line gives you free beer, wine, and mixed drinks. Commodore Tom was available for photographs via Shutters photographers as well as many other officers. 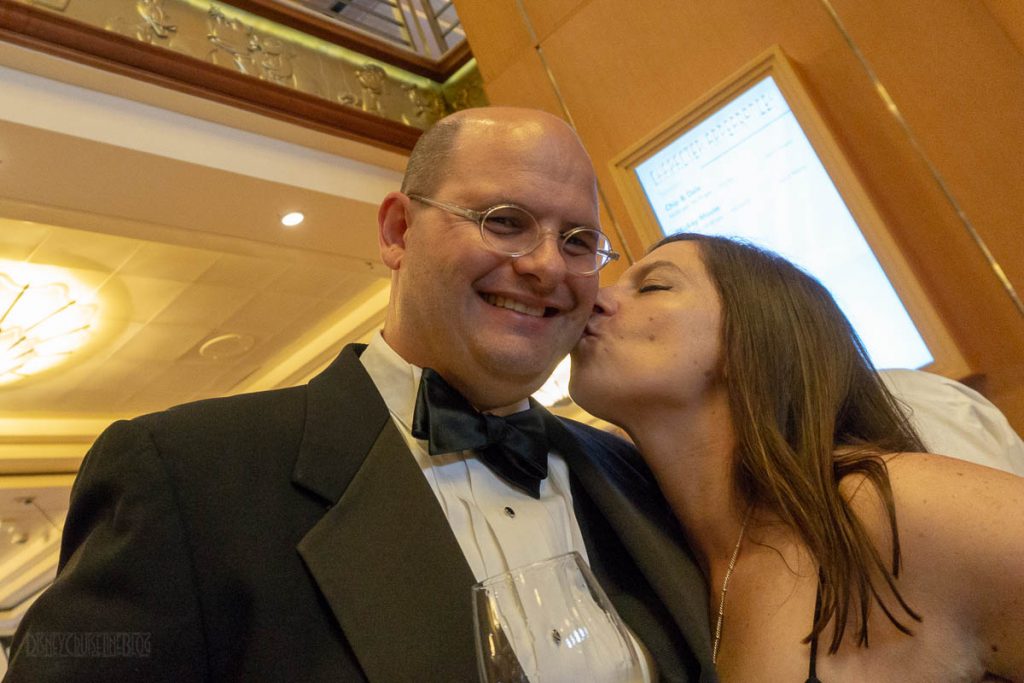 Dinner was in Rapunzel’s Royal Palace for what I can best describe as the Thug menu versus the Lantern menu. Tonight’s menu was a Tangled twist on the Prince & Princess menu in the same way things are done on the Wonder with Tiana’s on the longer sailings. I was thrilled when we entered the restaurant and saw my go to napkin folding designs, the candle on the plates. 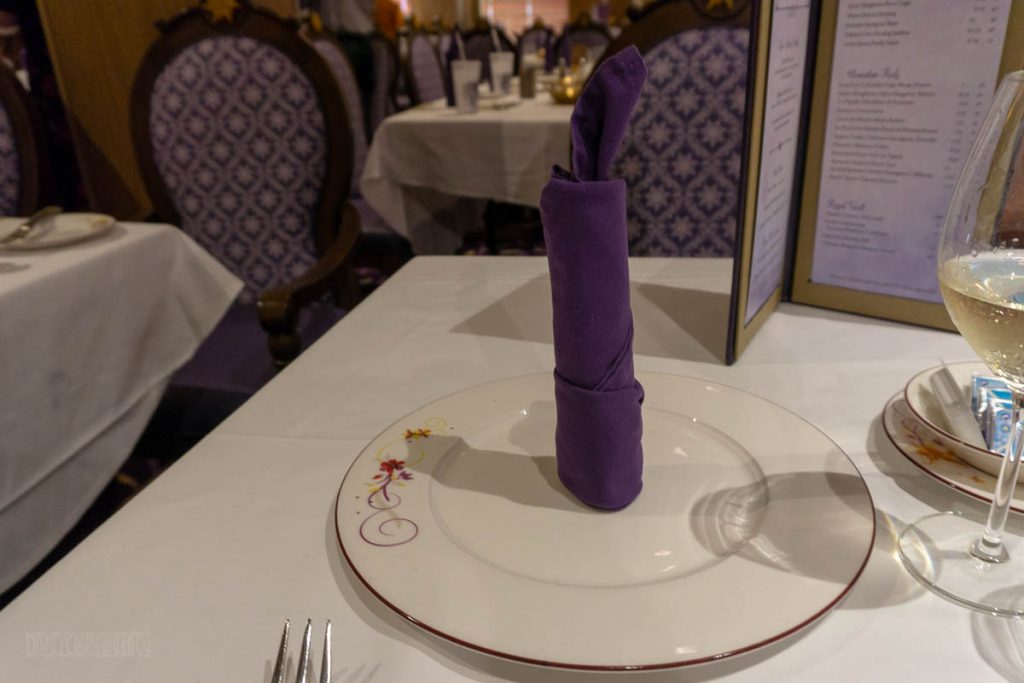 The show in Rapunzel’s was a scaled back show from what we experienced back in March and led by Hook Hand. Rapunzel was in attendance and they did celebrate her and everyone else’s birthday. We tired a few new items and some we’ve haven’t ordered in the past from the menu. 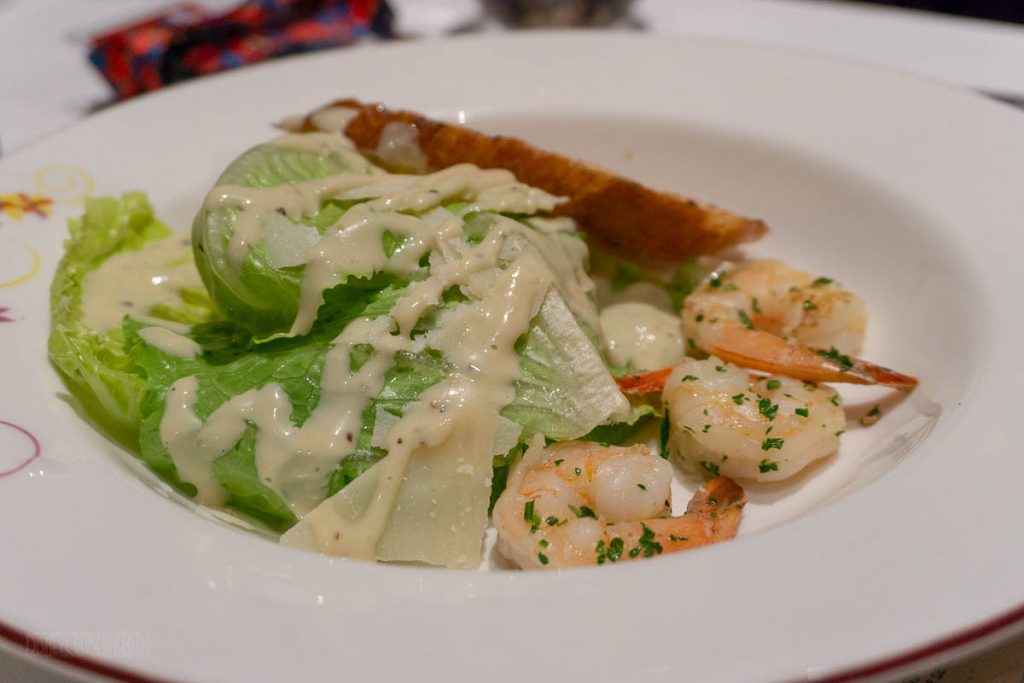 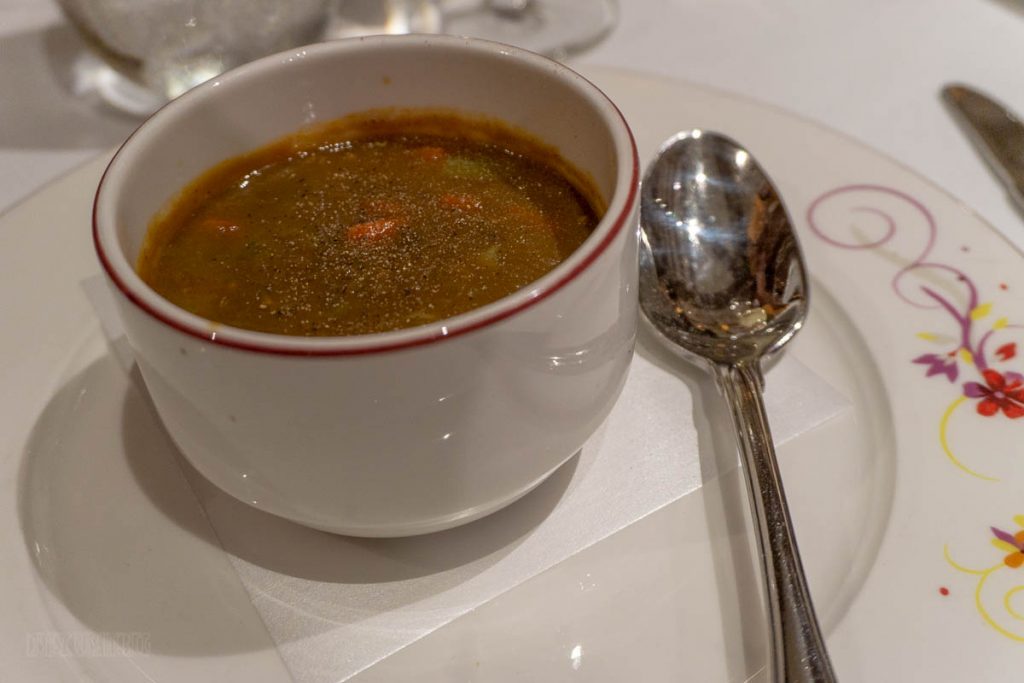 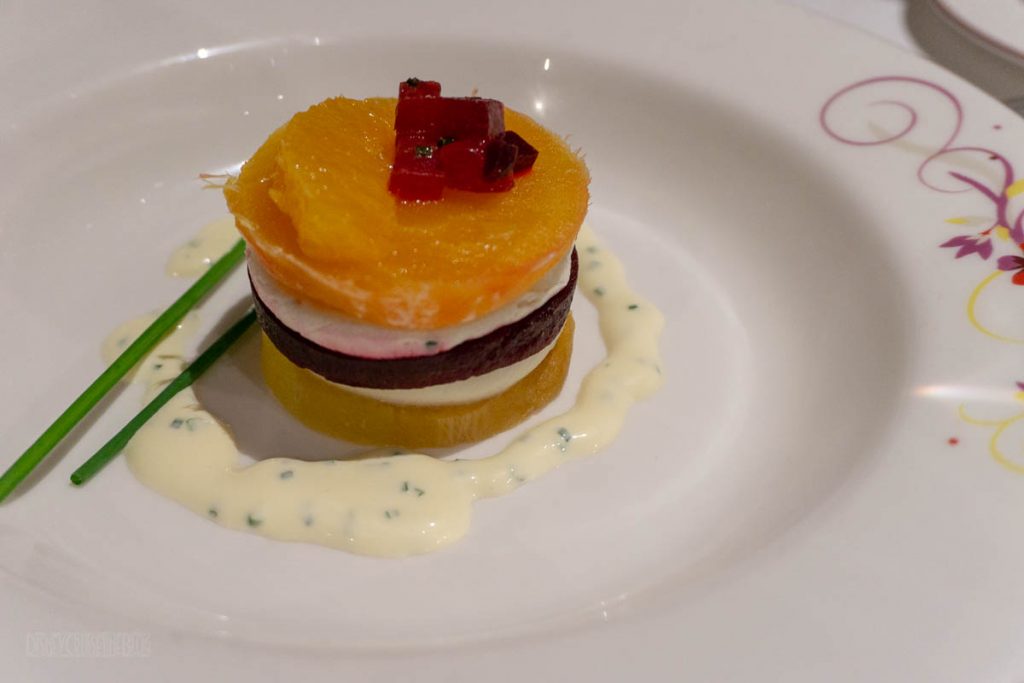 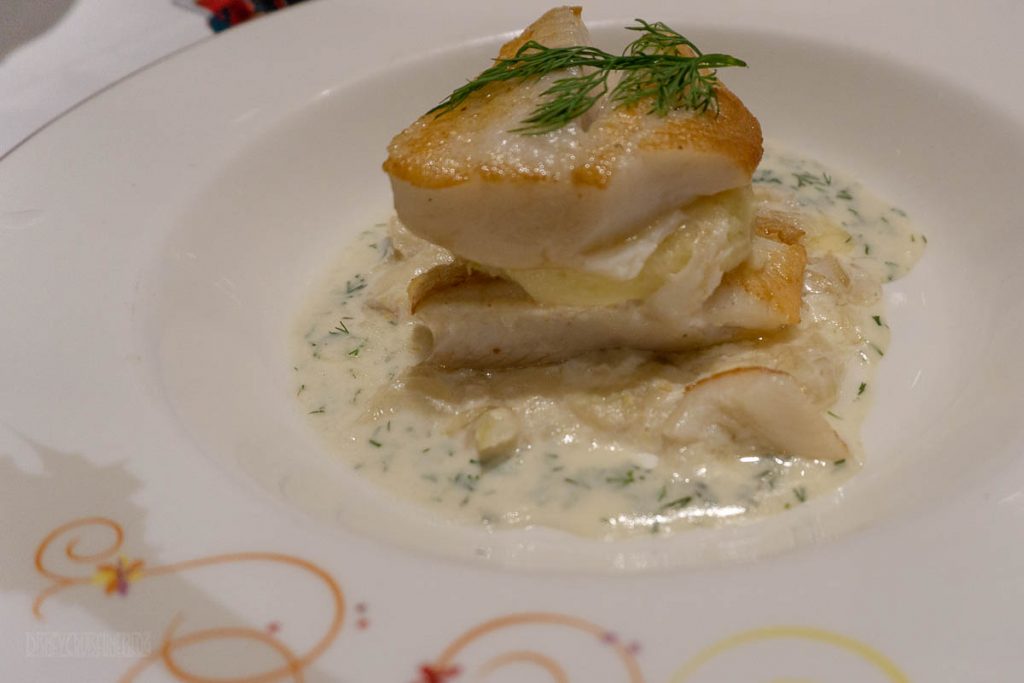 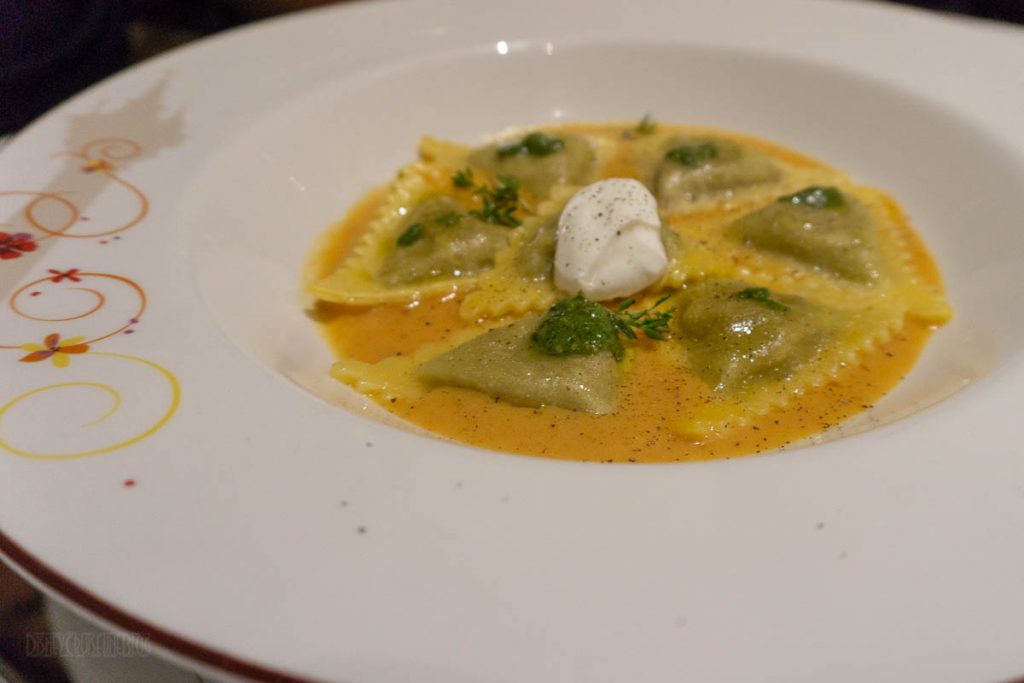 Pita Chicken salad has potential, but needs some more polish. I’d be willing to try it again as it was something different and had a decent flavor when all the ingredients were combined on the fork. 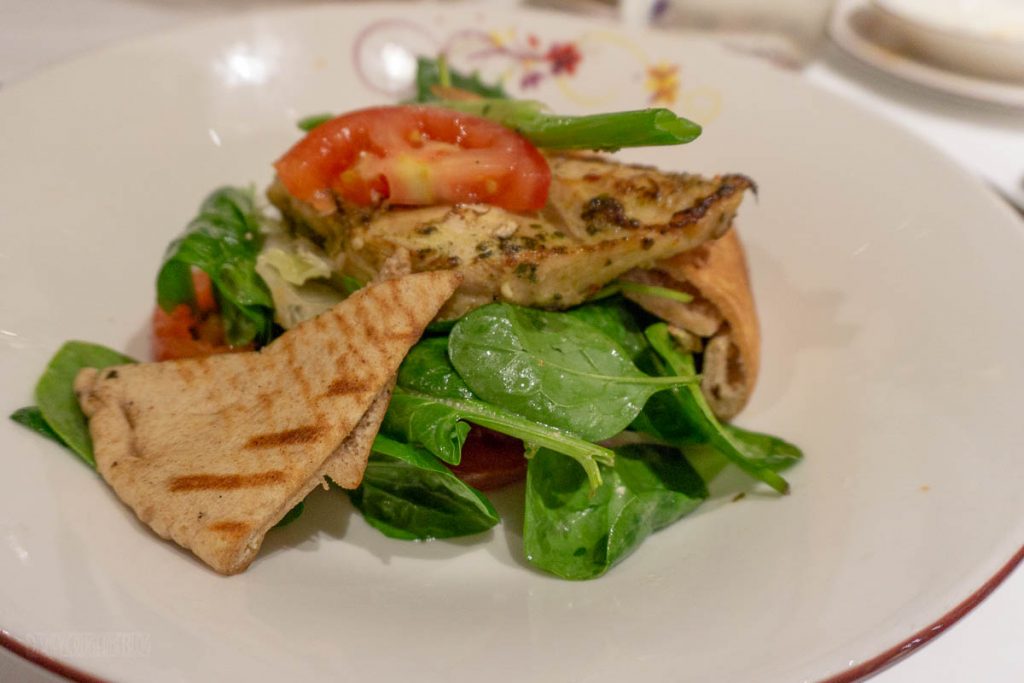 It is not normal for me to get two desserts, but tonight I struggled to pick between a red velvet cupcoke and a blueberry streusel. For my taste, the winner was the blueberry dessert. 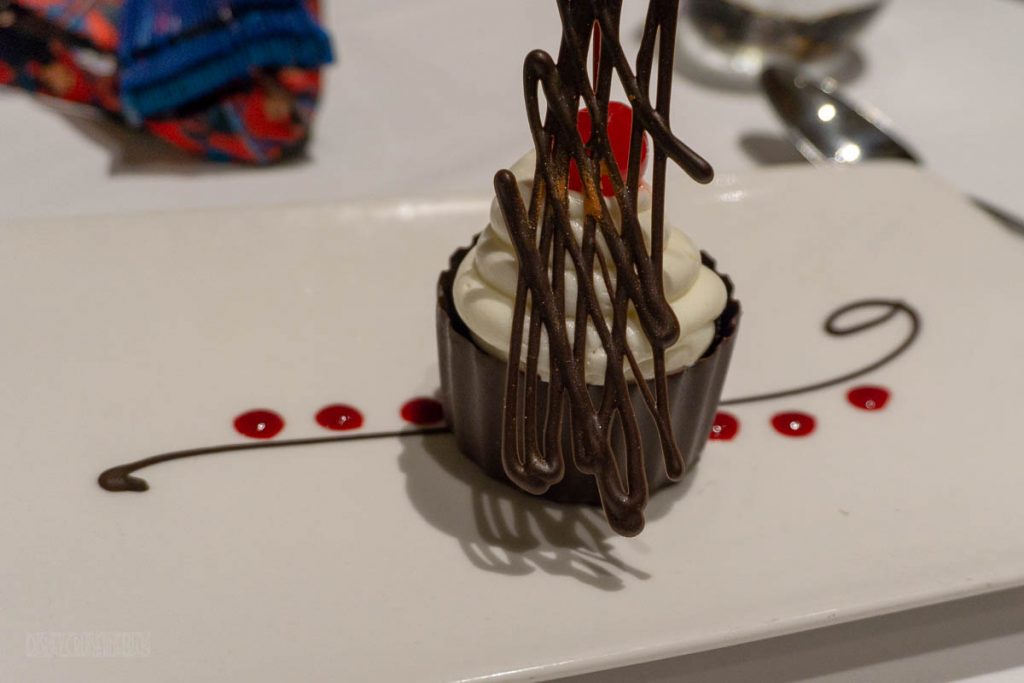 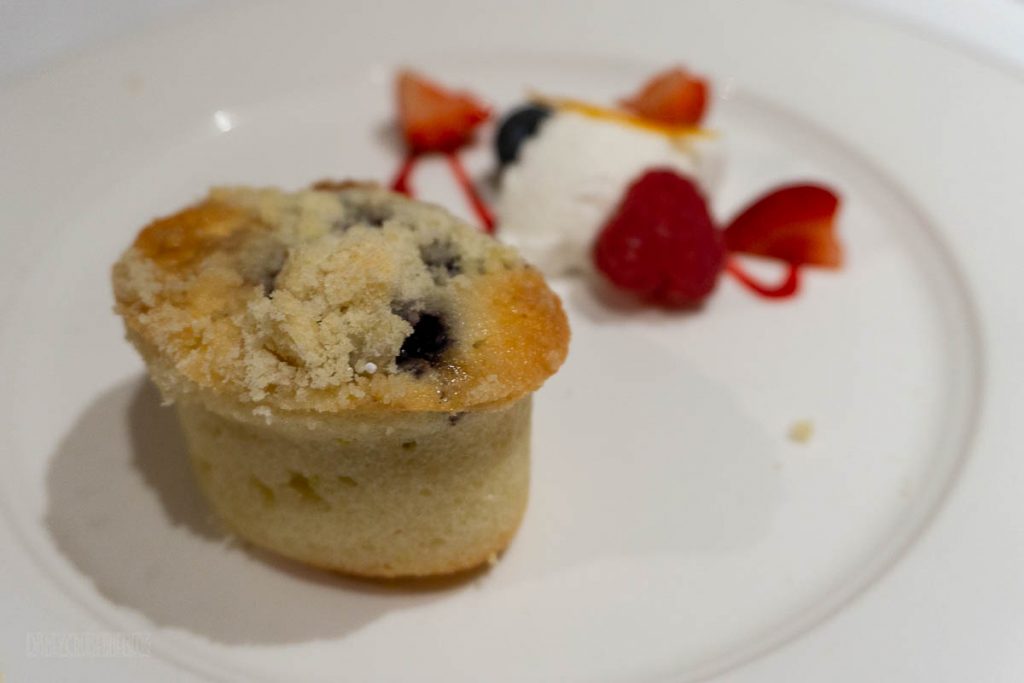 The cupcake was ok, but I prefer cream cheese frosting to be more cream cheese forward. What was present was subtle and didn’t hold up with the chocolate cake. 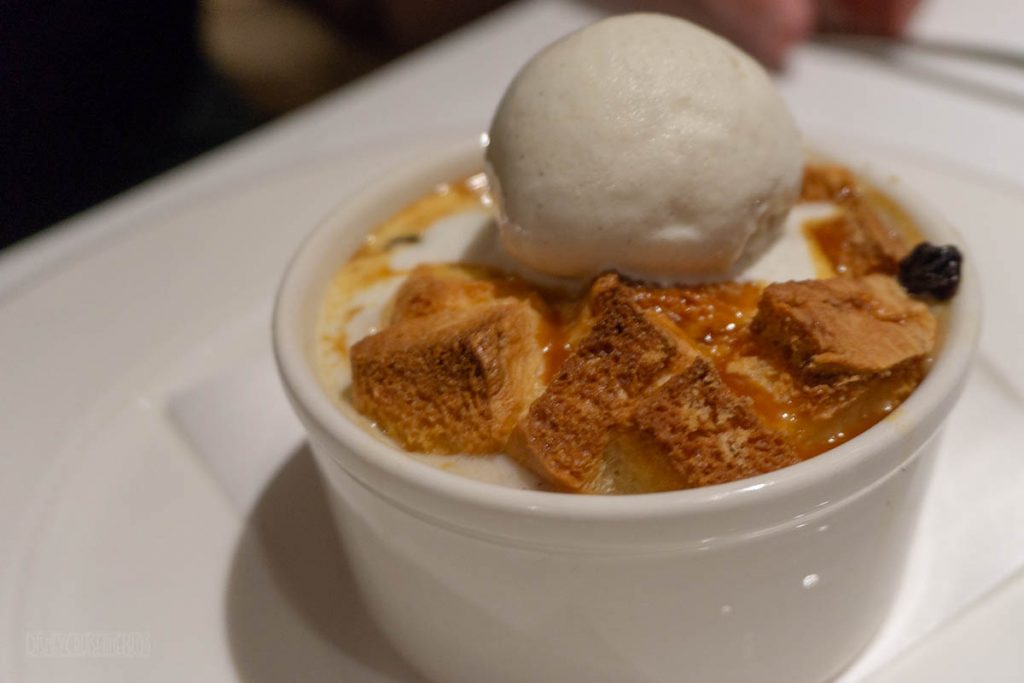 Our server had an extra tiramisu that he causally delivered to our table. Emily and I both sampled the no sugar added dessert and wished we hadn’t. I am not a fan of tiramisu  normally, but Emily loves a good tiramisu. The outer dome of the dessert was the weakest part of the dessert. It was so bad, Emily’s napkin finished her bite. I’ve had great luck with the no sugar added desserts, but in its current state, this one is not something we’d recommend. 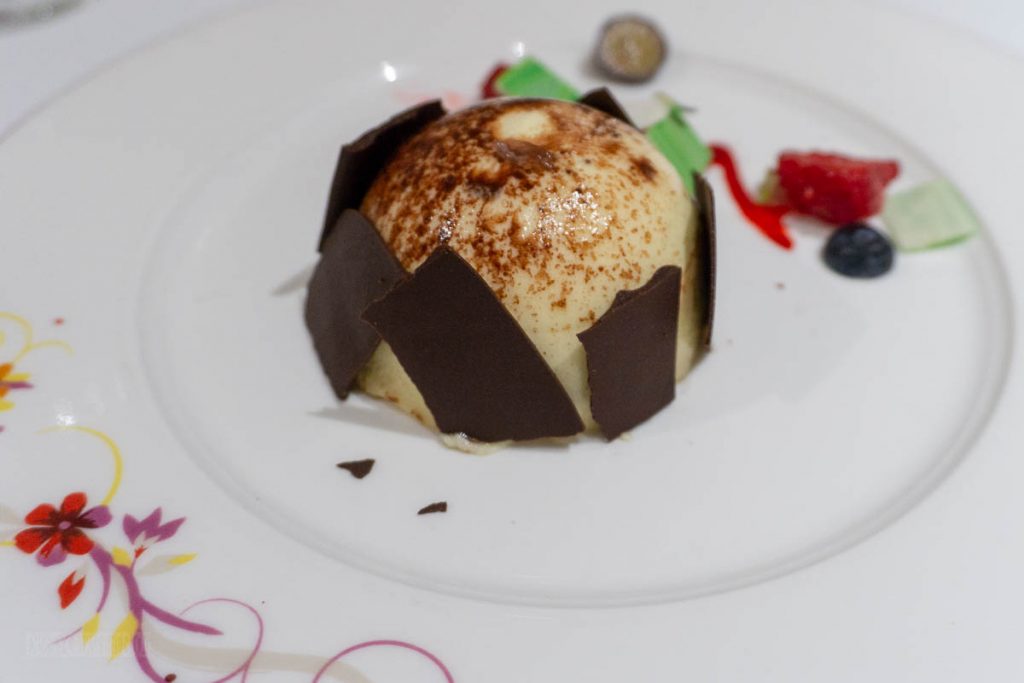 After dinner, we returned to the atrium, and I’d be lying if I said we didn’t go back for the second captain’s reception for another glass of wine. This time however, we were in line to get our photo taken with Commodore Tom. During the first reception, the line was already too long so we planned to try again later. 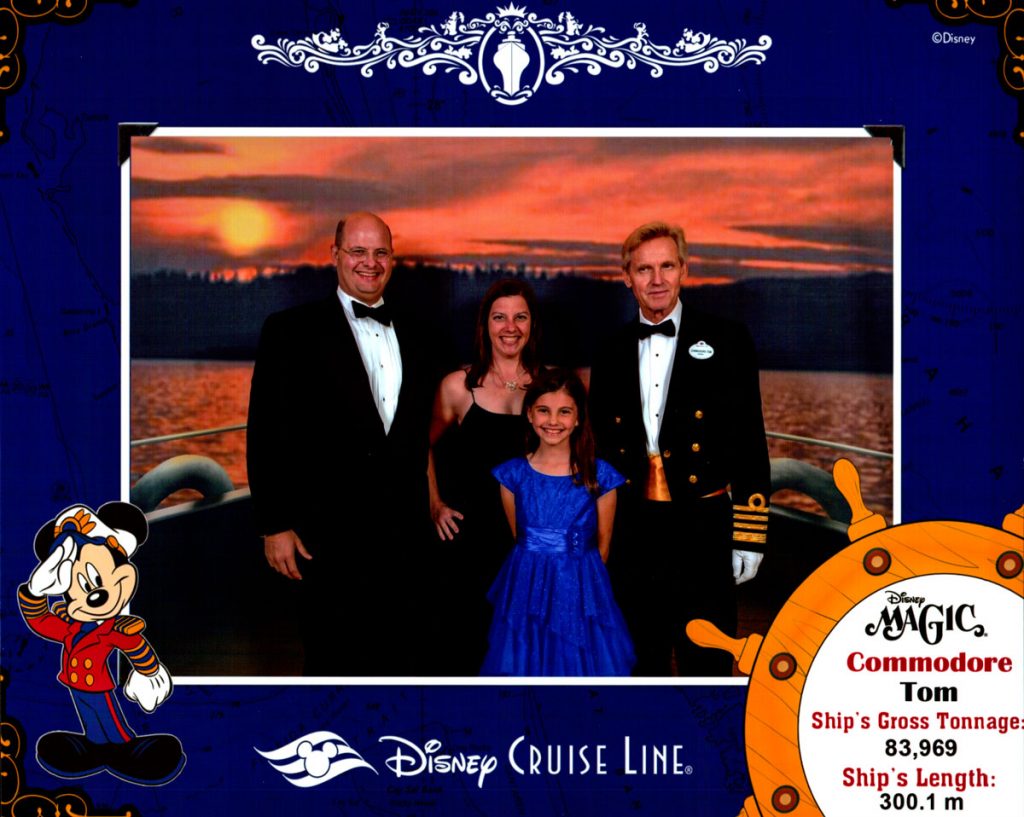 Overall, today was a predetermined day to just relax and enjoy our time on the ship. Tomorrow, we venture ashore at our first port of call, Naples, Italy.