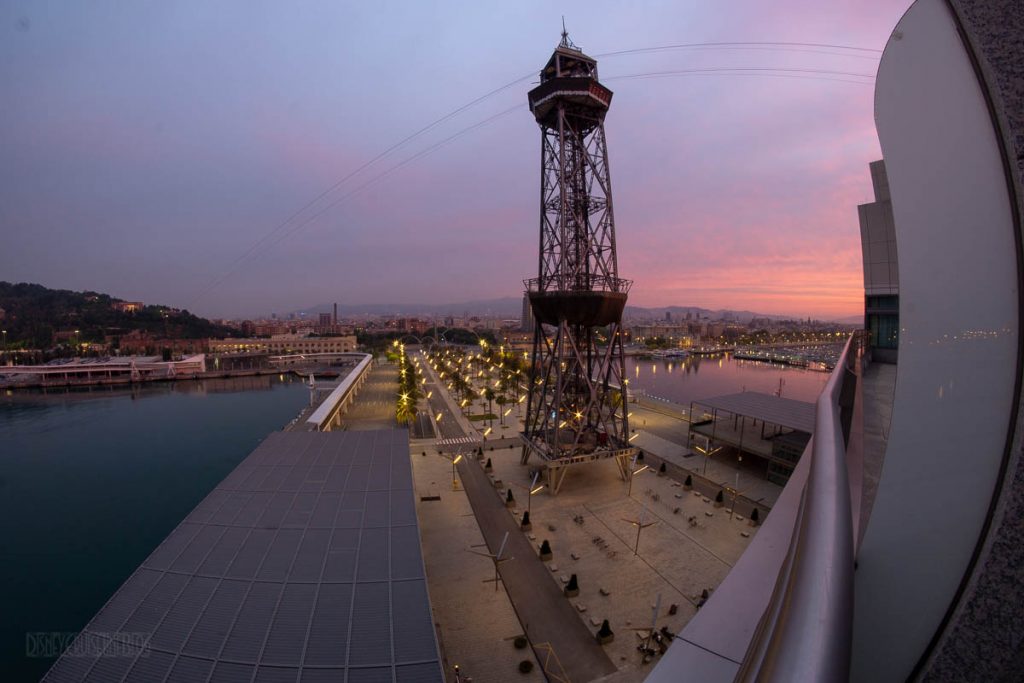 Emily went for a morning run on the treadmill while I took some photos from the top floor. 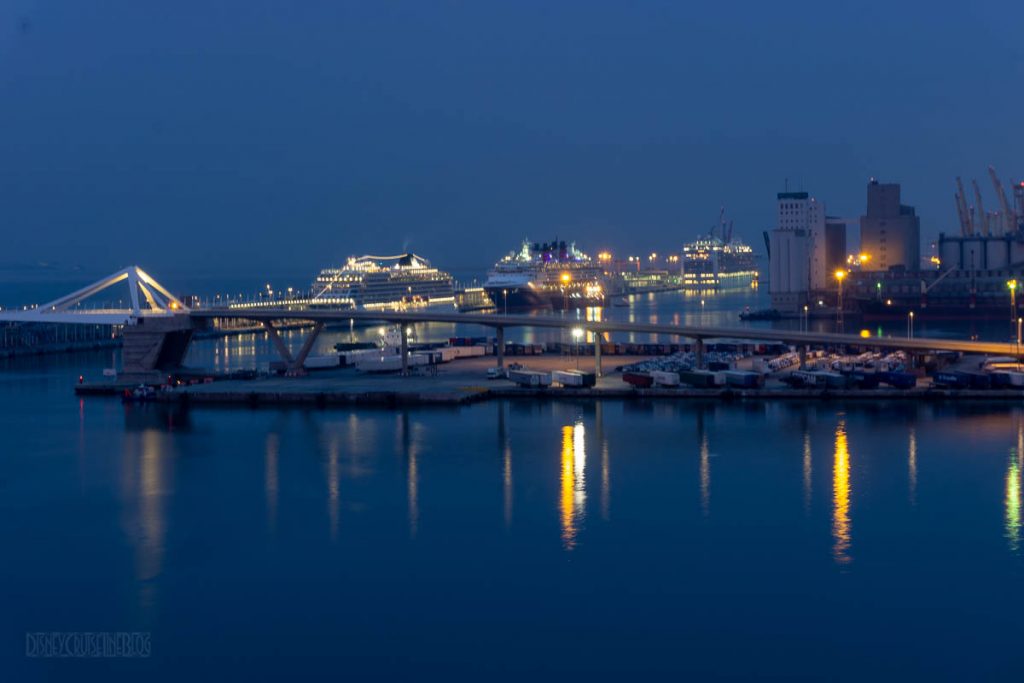 The Grand Marina included a continental breakfast which puts each and every American hotel continental to breakfast to shame. The variety of food rivaled a Cabanas buffet, but the quality was amazing. 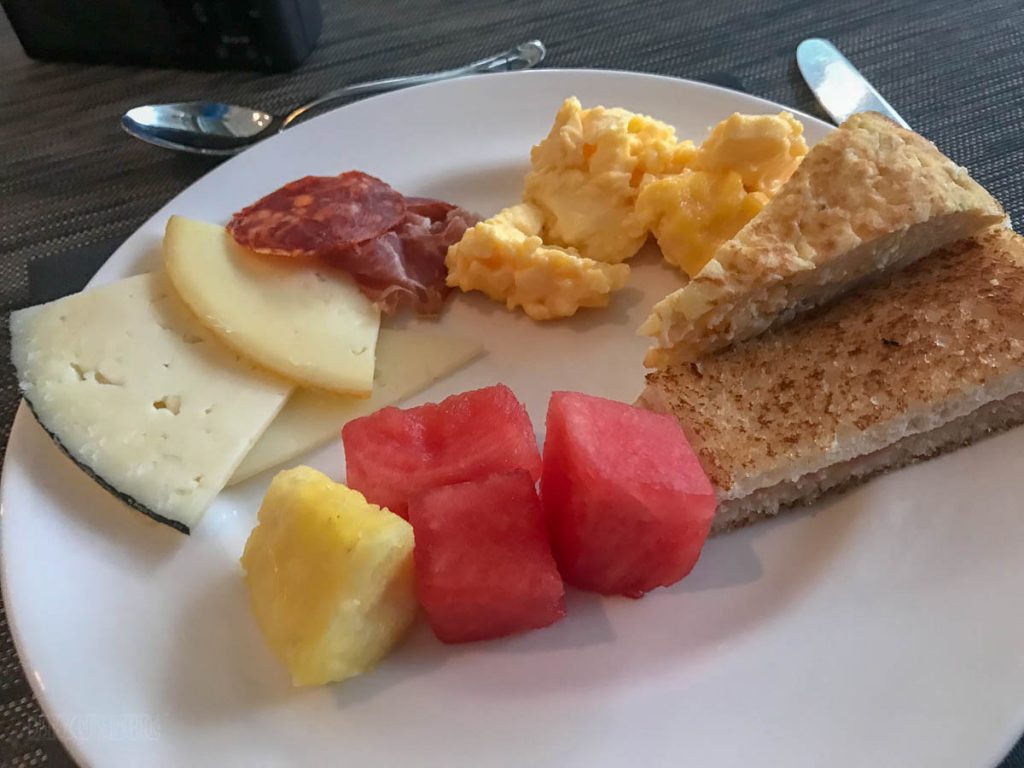 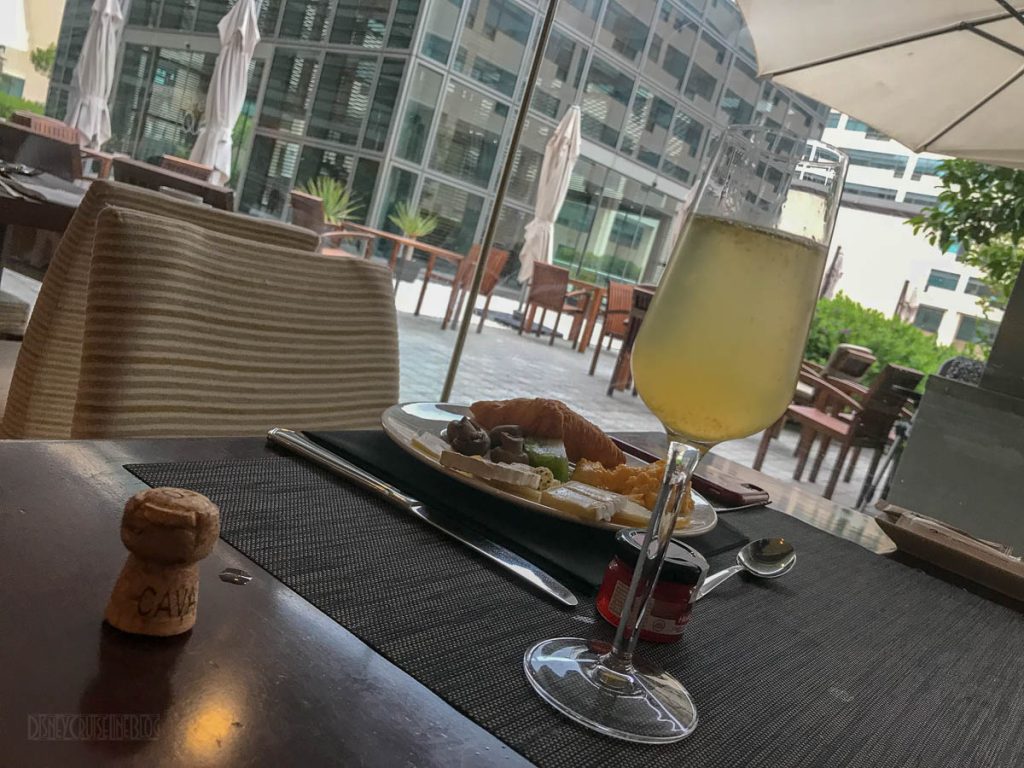 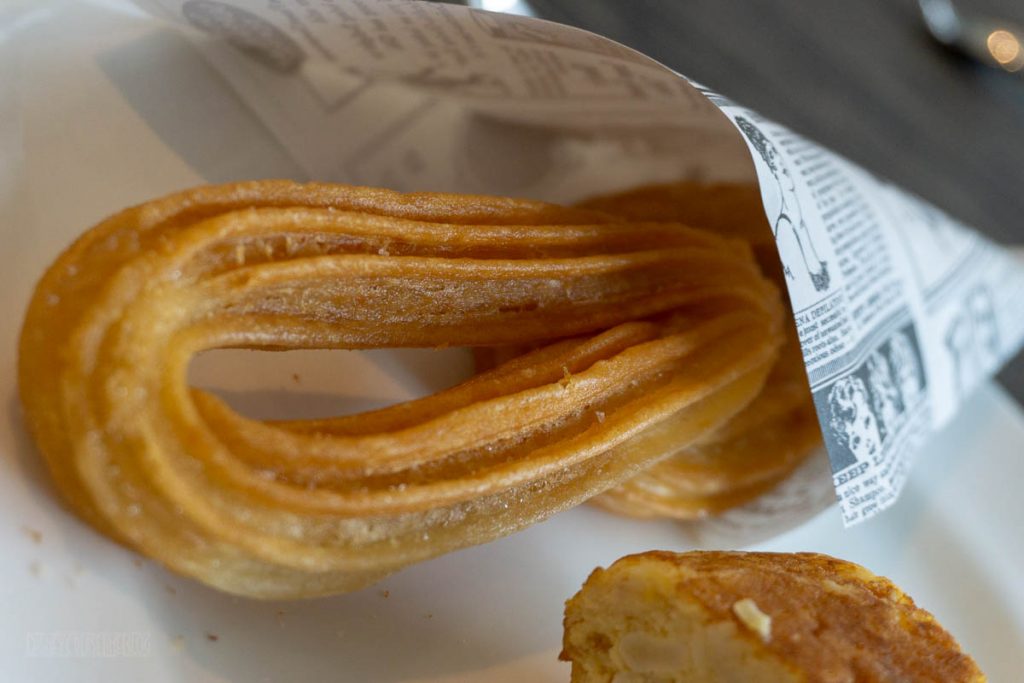 On top of that, there were self serve mimosas/sparkling wine, red, and white wines as well as an espresso machine. 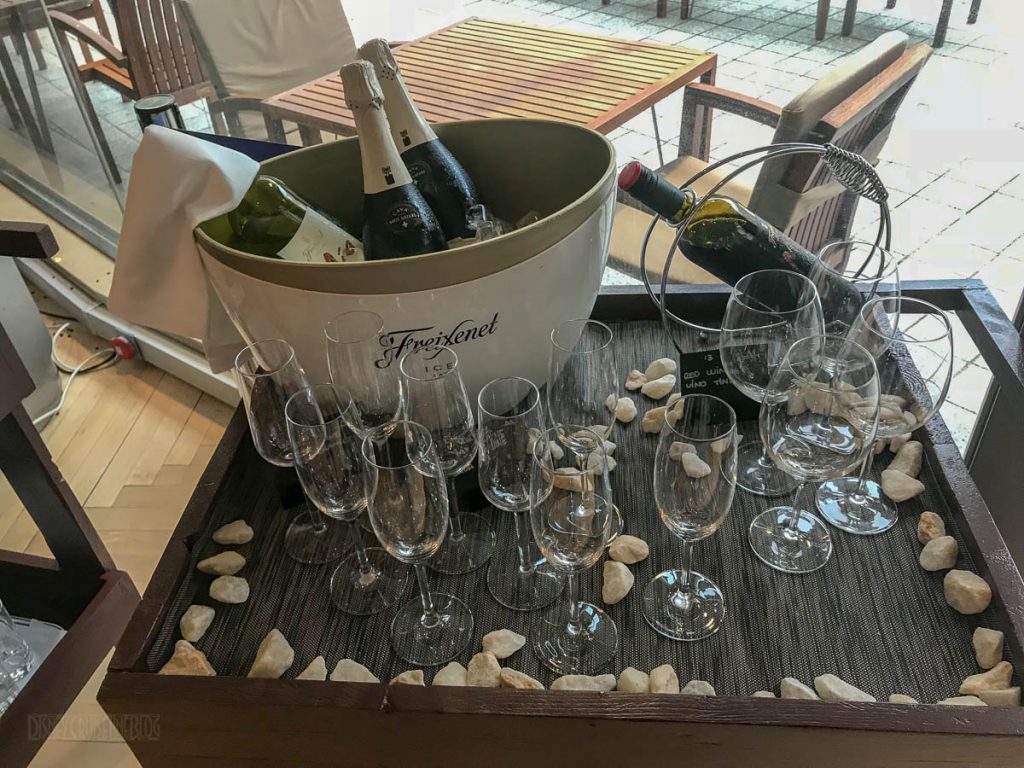 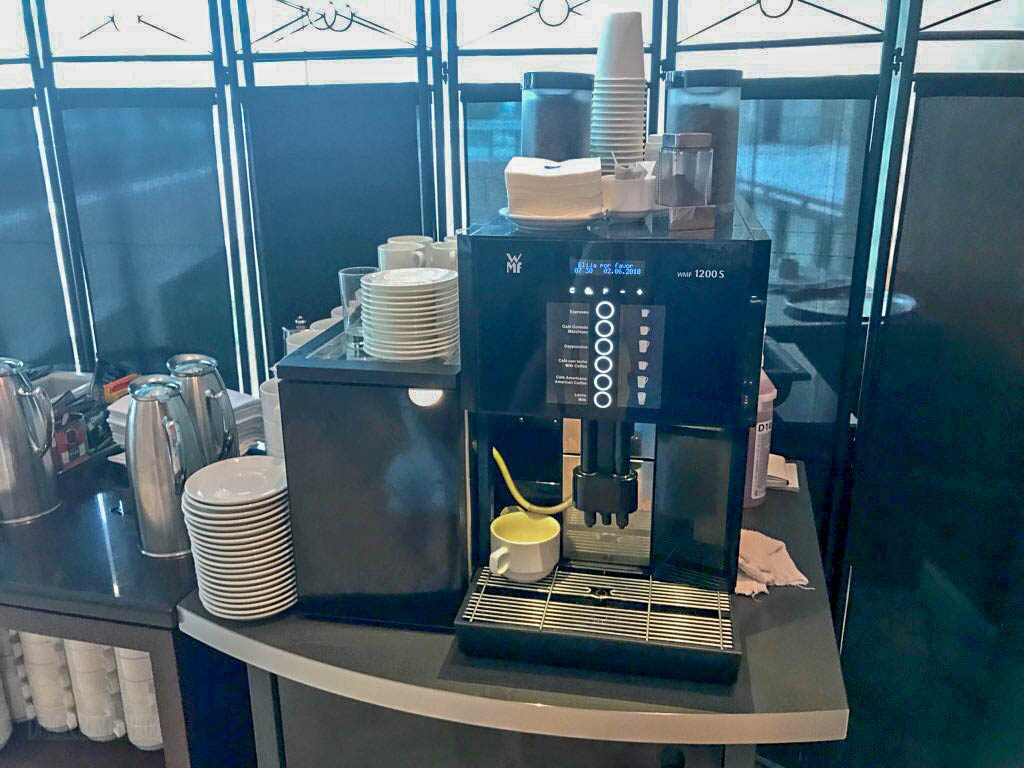 So far, Barcelona has been amazing and we’ve hardly scratched the surface. We are already wanting to come back for a longer stay. Emily remarked that there wasn’t enough time to use the Jacuzzi tub in the room.

We packed up quickly, checked out, and jumped in a taxi. The drive from the hotel to the cruise terminal was just over 5 minutes. 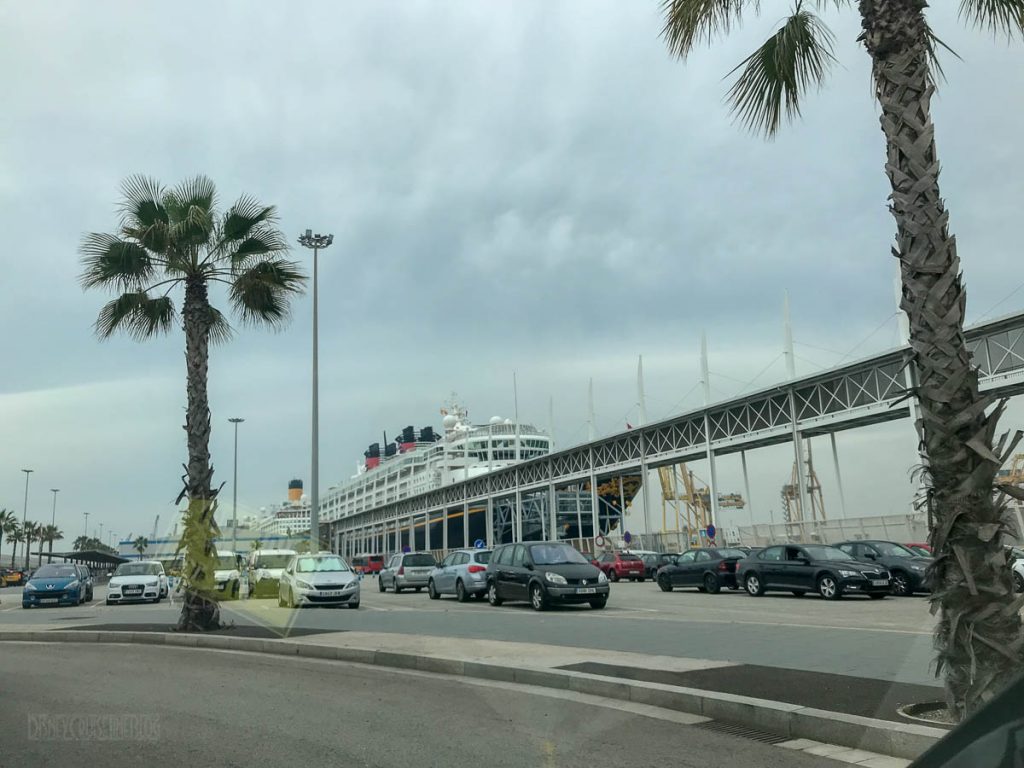 We were extremely early on purpose arriving before 9:30. 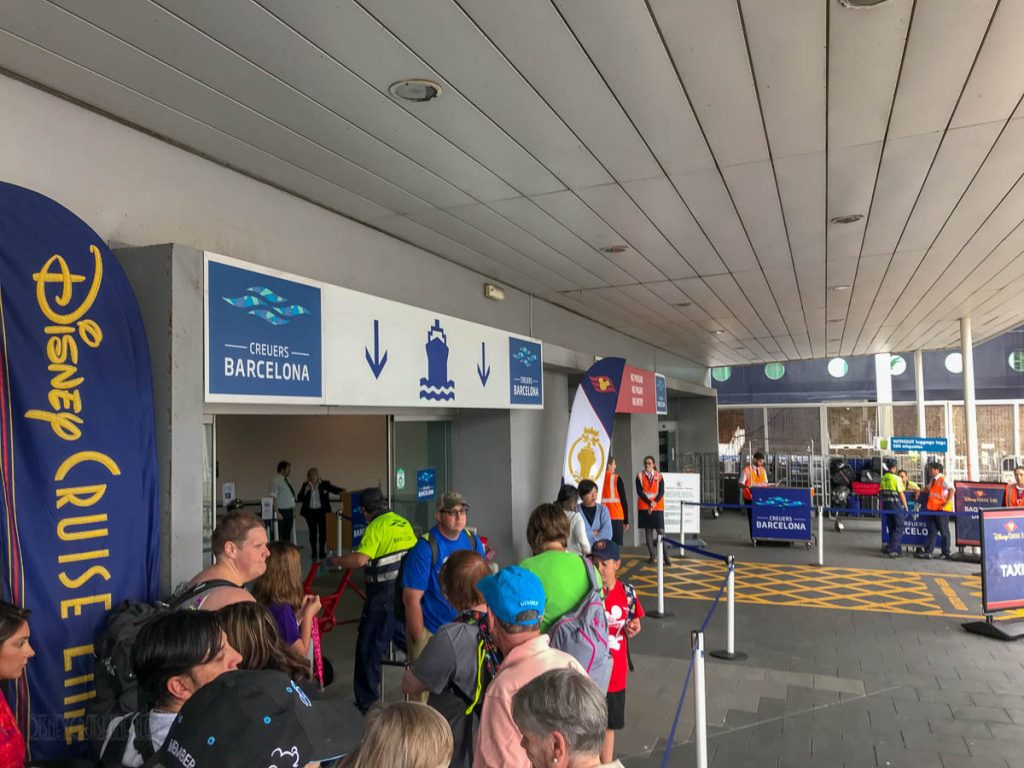 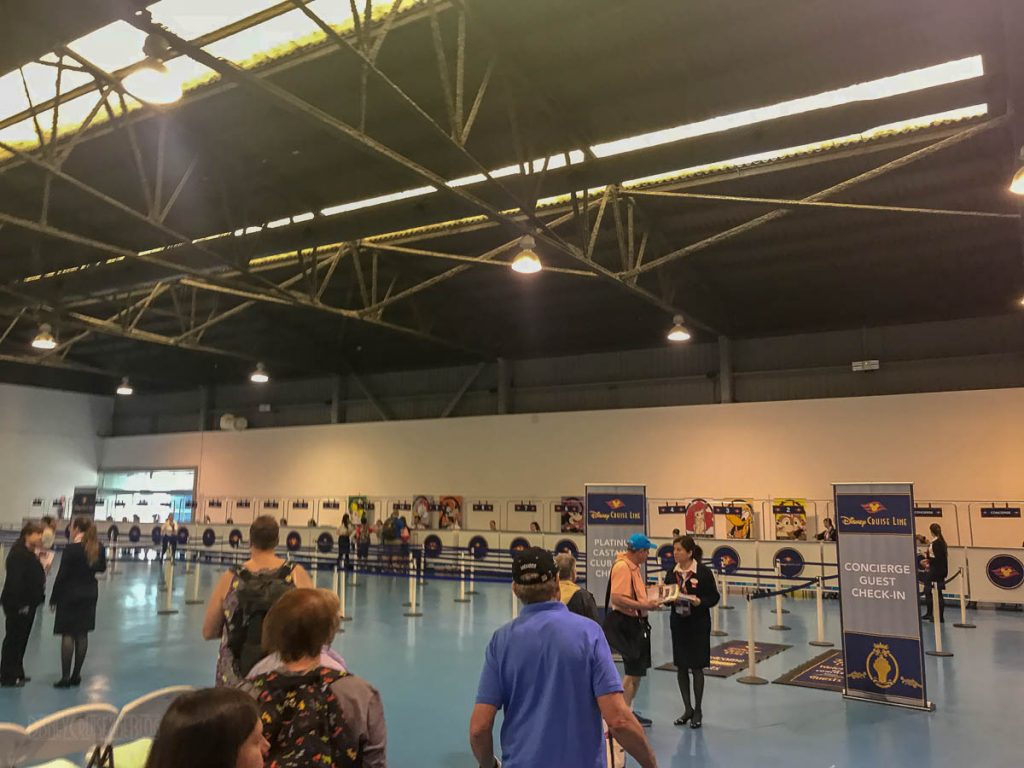 We did this because we were hoping to be one of the first to check-in with the hopes of upgrading our stateroom. Unfortunately, it did not matter as the ship was full and no upgrades were available. 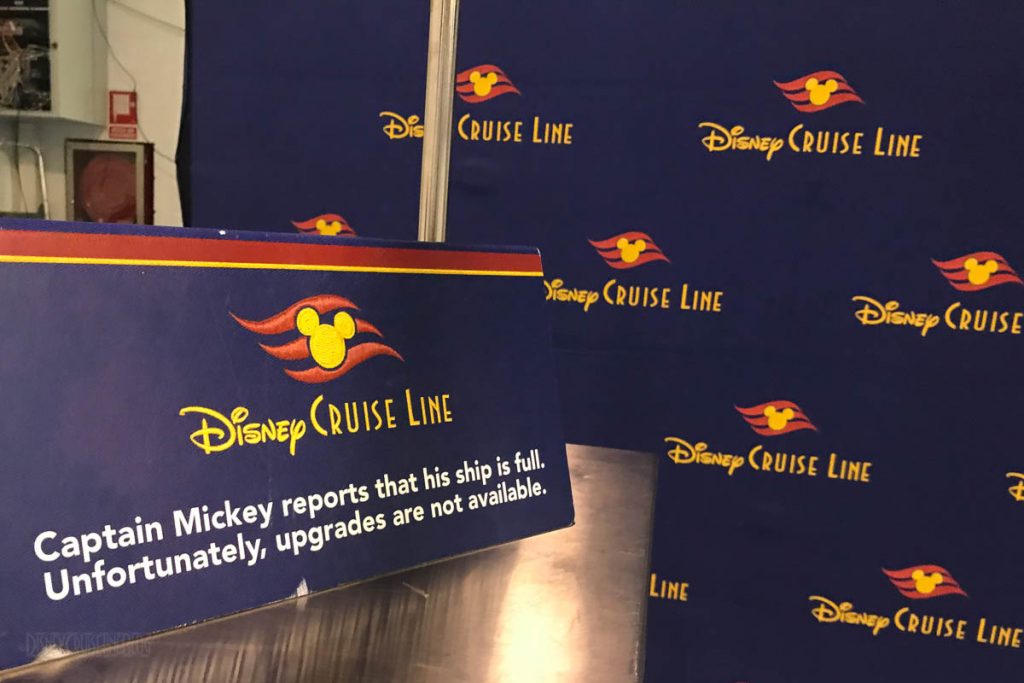 Oh well, I’m sure DCL will still find a way to get that extra money out of us one way or another.

There are 3 shops and a snack bar in the port. One of the shops is a clothing shop, which does offer some soccer jerseys and things. Another shop is a shop that has souvenirs, wine, & liquor. 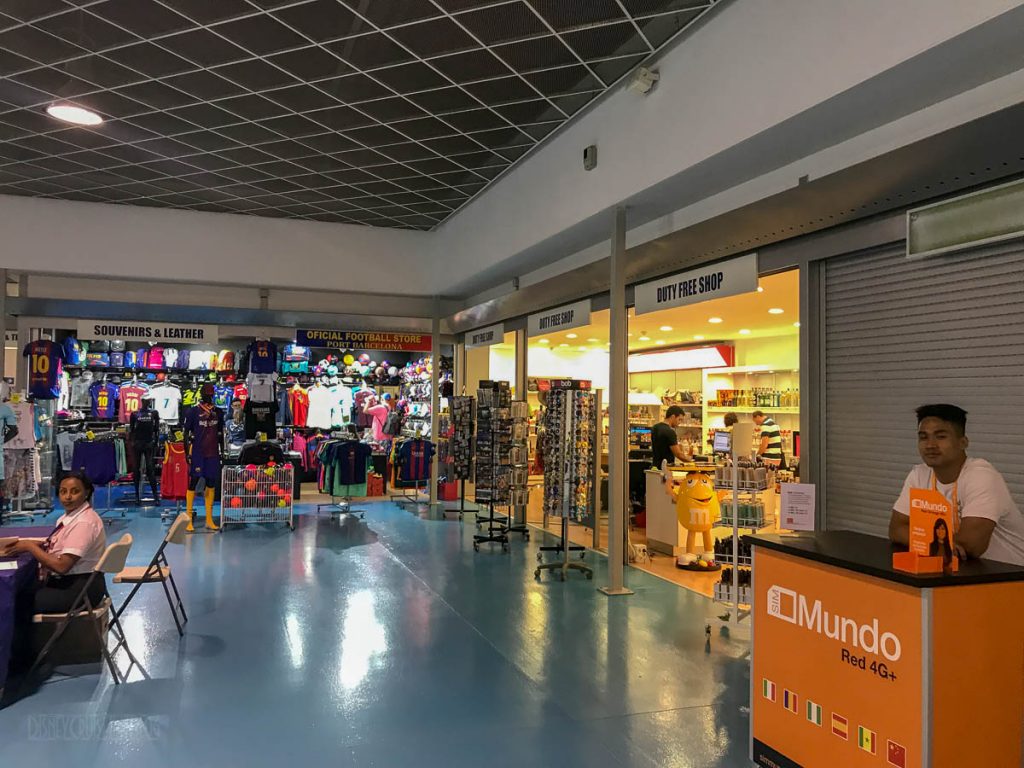 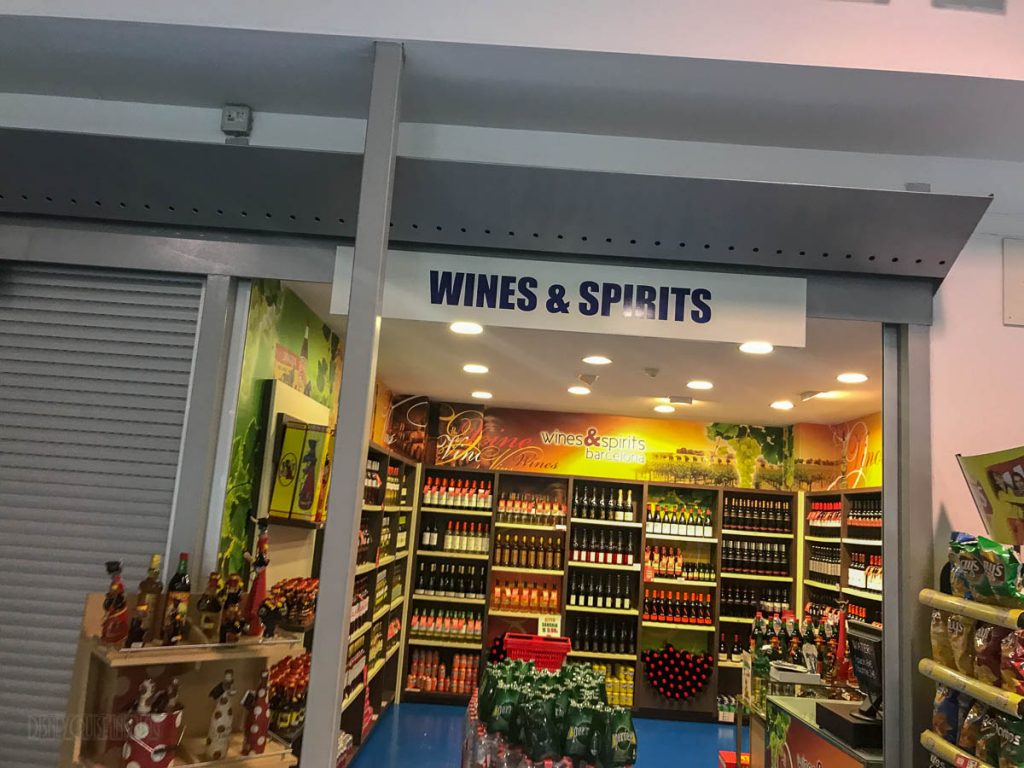 The third shop was a Wine & Spirits shop, which had quite a few buy one get one free wine deals. We already had our allotment of wine, therefore we did not purchase any more, but this is great for those looking for a last minute pick-up.

For anyone wondering about the timing of the morning – the terminal opened the doors to embarking passengers around 10:30. They did take our checked luggage shortly after we arrived. The port had plenty of security lanes to expedite the screening process and there were plenty of check-in windows processing guests. We were informed boarding would begin around 1 PM, but in reality the boarding process started around 11:45.

Once we boarded, we dropped off our re-booking form. Normally, the first order of business onboard is lunch, but after the amazing breakfast at the hotel and the fact our internal clocks are still adjusting to a new eating schedule, we went to preview some of the merchandise in the shops. We then went to the Promenade Lounge to grab a Palo dinner reservation & then finally went up out on deck. 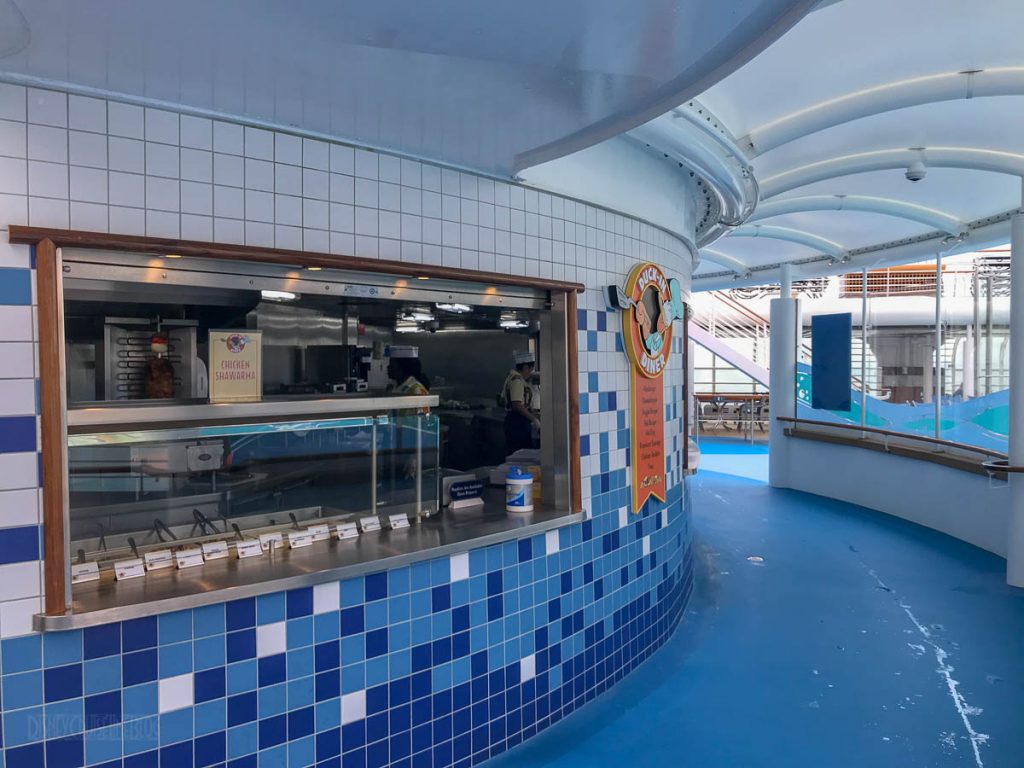 Isabelle wanted chicken shawarma from the Duck-In Diner, which now features a properly placed sign between the windows. Em had a small salad that she made in Cabanas, & I had a piece of BBQ chicken pizza from Pinocchio’s.

Emily and I went down & grabbed some drinks from Signals bar. After neglecting to order one of the new drinks that caught my eye from Signals back in March, I made sure to order it today. 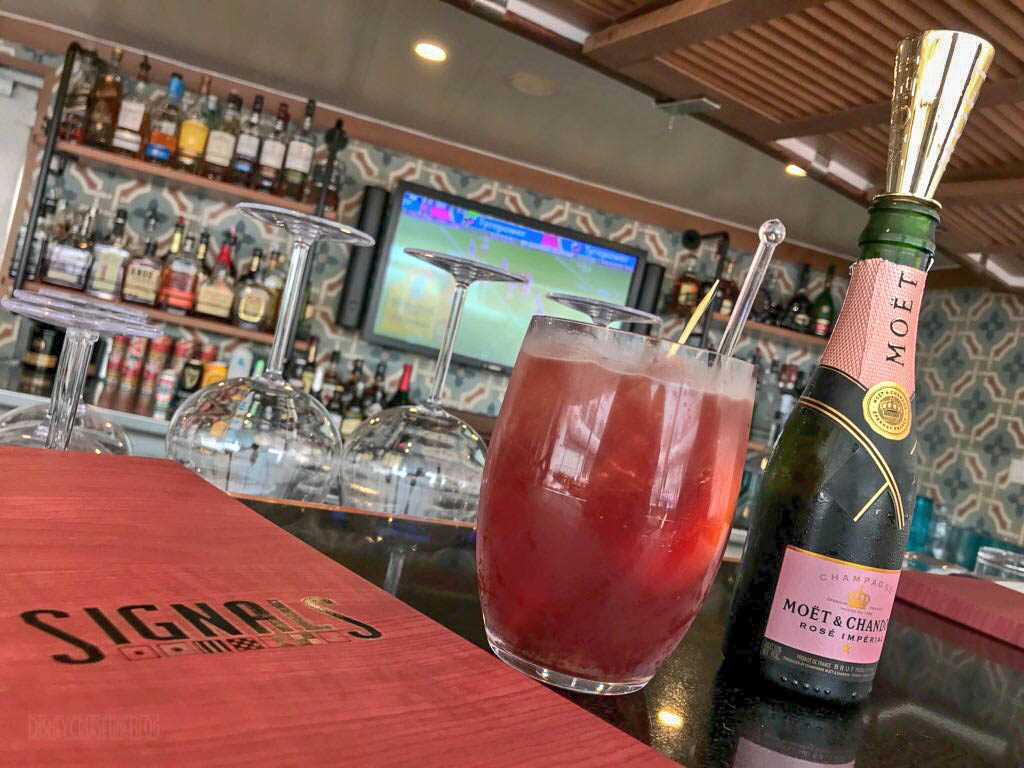 The Re-Fashioned can be best described as a more approachable take on an Old Fashioned. Filthy cherries, an orange slice, smoked sugar, and Angastora Bitters are muddled before adding Port 365 and whiskey. The Re-Fashioned is then garnished with a delicious orange rock candy skewer. 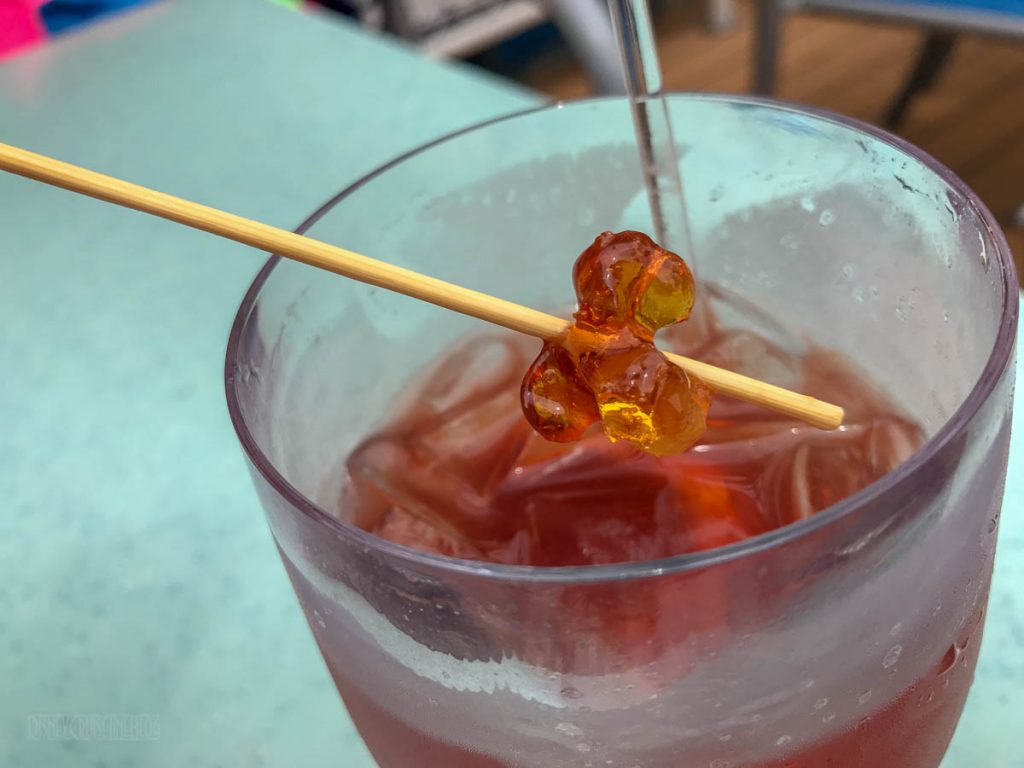 While I enjoyed the drink, it was a bit too sweet for my taste. I will say it is a refreshing poolside take on the classic cocktail and I will likely order it again.

After FaceTiming with my parents, we headed to get Isabelle her sticker from Edge &  then headed to our stateroom to drop off our carry on items. We really didn’t have much on our to do list for this afternoon. It is a cloudy and cool (from a Floridian’s perspective) day in Barcelona, so the pool is not really an option. We opted to watch Mighty Ducks 2 in the stateroom while we waited for our luggage to arrive. Interestingly enough, historically arriving early to the port results in our luggage arriving to our room before 3PM, but the last couple of times on the Magic our luggage has not arrived before the muster drill. 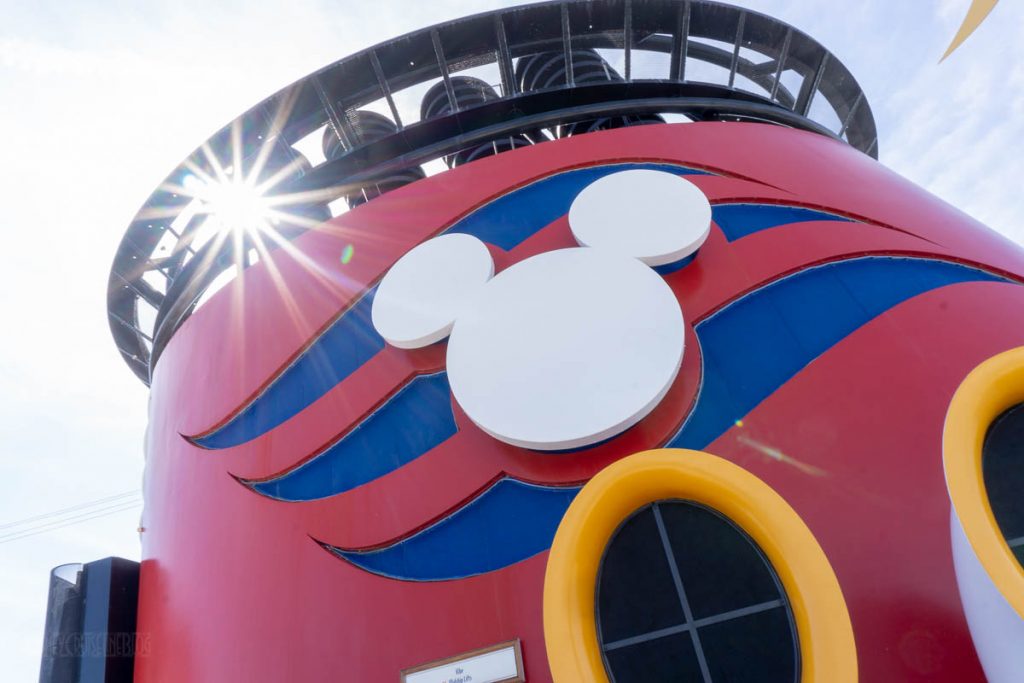 By late afternoon, the sun was shining just in time for the sail away party which was well attended. Our cruise director Darren welcomed everyone aboard while Mickey and the gang led the countdown and we were off on our Mediterranean adventure.

This was the first of several times that we were sold the new company line about the double dose of production shows in the Walt Disney Theatre. This topic is something I will go into more detail in the future, but for the time being, you should let DCL know your opinion on the scheduling change. It is important to realize the variety acts are still onboard, DCL is NOT replacing them with a duplicate stage show, they are simply moving the variety acts to a lounge in order to give guests more flexibility in the evenings. Basically, the argument that DCL is being cheap by eliminating variety acts is not going to hold water when giving them feedback. 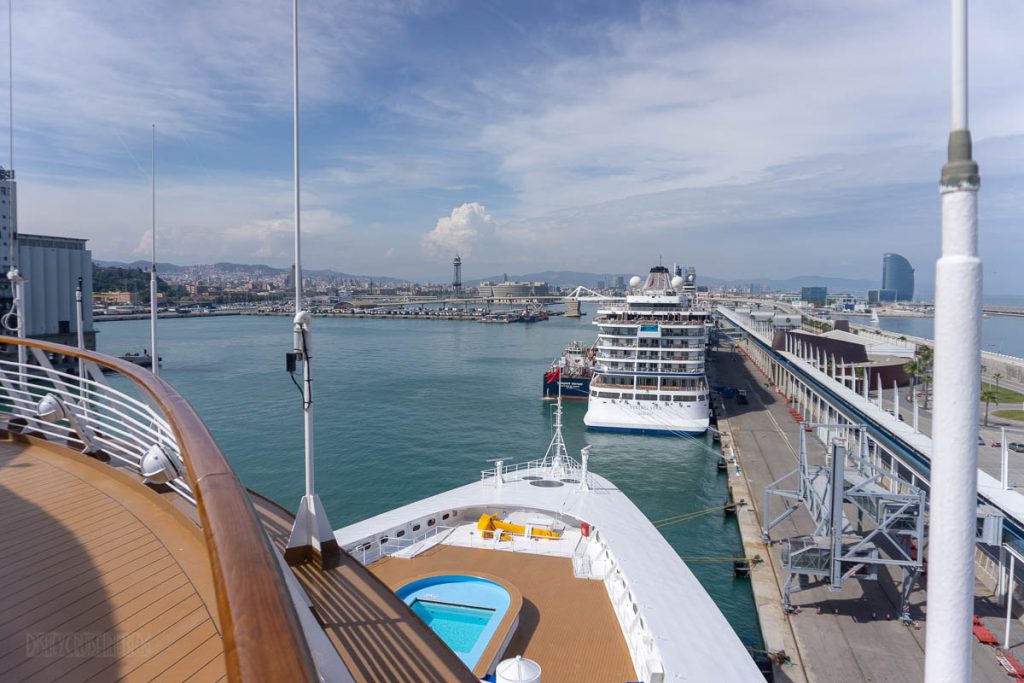 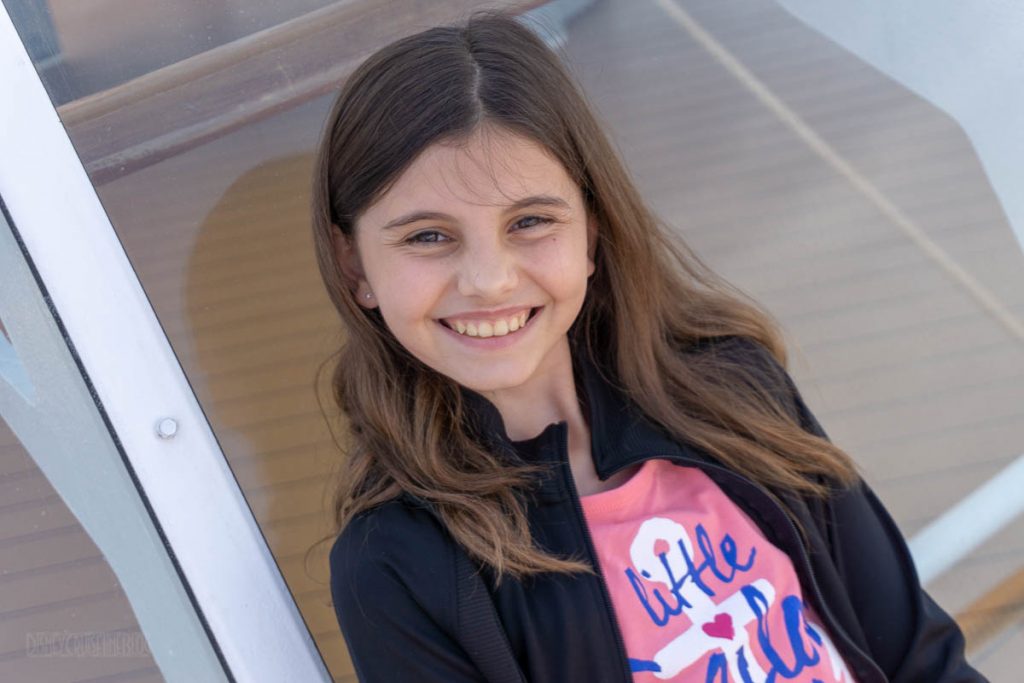 On the way back to our stateroom, we stopped in the Oceaneer Lab to make sure Isabelle was set up with self-check privileges and to get the lock put on her Oceaneer Band which she received in the terminal at check in. All was well and upon returning to our stateroom our luggage was waiting to be unpacked.

Dinner times on this Mediterranean voyage are a little later than what you’d experience sailing the Bahamas or the Caribbean. The dinner seatings are pushed 15 minutes to 6PM and 8:30PM, which is perfect for the upcoming port days when with later all aboard times. Normally, unpacking is a team effort, but I ran out to deck 4 to get the last few minutes “free” cellular data from my global hotspot that I’m testing out this cruise. I was rushing to sign up for a #NASASocial event at Kennedy Space Center for a late June SpaceX launch that my good friend alerted me to as were were sailing away. Eric, if you are reading this, I don’t think my application submitted before I lost cellular data.

I rushed back to the room with less than 20 minutes to dinner and tried to help with the unpacking to discover most of the work was done except for hanging up my evening attire. We quickly transitioned from unpacking to getting dressed for dinner and headed down to Animator’s Palate for our first dinner of the cruise.

This evening’s dinner menu was the standard Animator’s Palate menu along with the Sorcerers Apprentice show. We still were not all that hungry after the fantastic breakfast at the hotel, but we didn’t want to skip on the first night. It has been a few years since we’ve requested a server, but our serving team from our Marvel Day at Sea cruise was so great we asked them if they’d still be onboard in June. Our main server was going to be on vacation so we just requested our Assistant Server, Aniket, who said he’s still be onboard. We were delighted to learn he has been promoted from an assistant to main server!

We came really close to all ordering the Black Bean Chipotle Cakes which continue to improve. If you haven’t tried them, give them a shot, as they are really flavorful. It is Isabelle’s ‘go-to’ entree. I opted to try something different, the tuna steak. It was ok, I couldn’t tell you if it was cooked properly or not because I’ve never ordered a tuna entrée prior to this evening. Would I order it again? Probably not. Like I said, it was just ok. Emily had the same dish that she had in March, which was the other vegetarian dish, a sweet potato mix in a puff pastry. 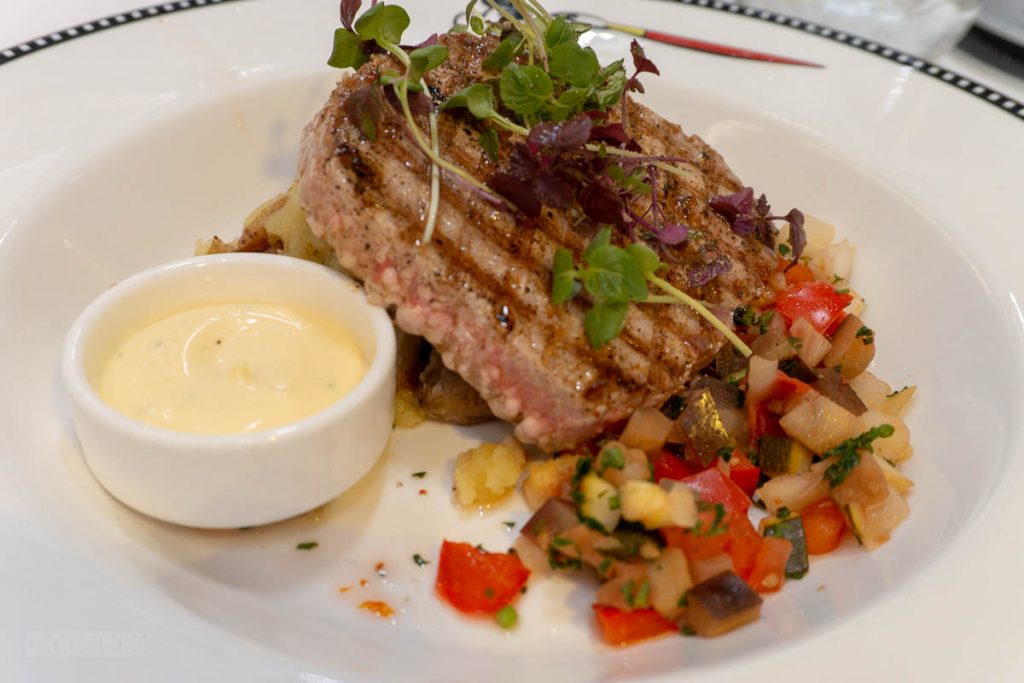 After dinner, we went shopping. There was a line of general Europe 2018 logo merchandise that covers all the ports this summer as well as Mediterranean specific merchandise. Here is the rub, the shops are not operating as duty free, there is a 21% VAT added on to the onboard purchases, including the internet data packages. When we checked out, we were informed that if we spent $108 on a single transaction and that if we would be taking the brand new merchandise out of the European Economic Area, we would be able to submit a form and get reimbursed for this tax. Our original purchase after our 10% Castaway Club discount put us just under this amount, so the VAT led to an additional purchase to get to the minimum. Emily was accompanied by an officer with our purchases down to Sea Treasures to look for something else to make up the minimum. We will see how this whole process goes at the end of the cruise. All I know is that this is an inconvenience and I’d almost take my chances of waiting for the merchandise to show up at the Disney Outlet stores back home.

After our little shopping spree, we headed back to the room and called it a night. However, while I stepped out of the room, the stateroom hostess topped by to introduce herself. Emily mentioned that she gave the scripted ‘the shows are being shown twice to give your schedule ease.’ Tomorrow is a day at sea before our first port of call.