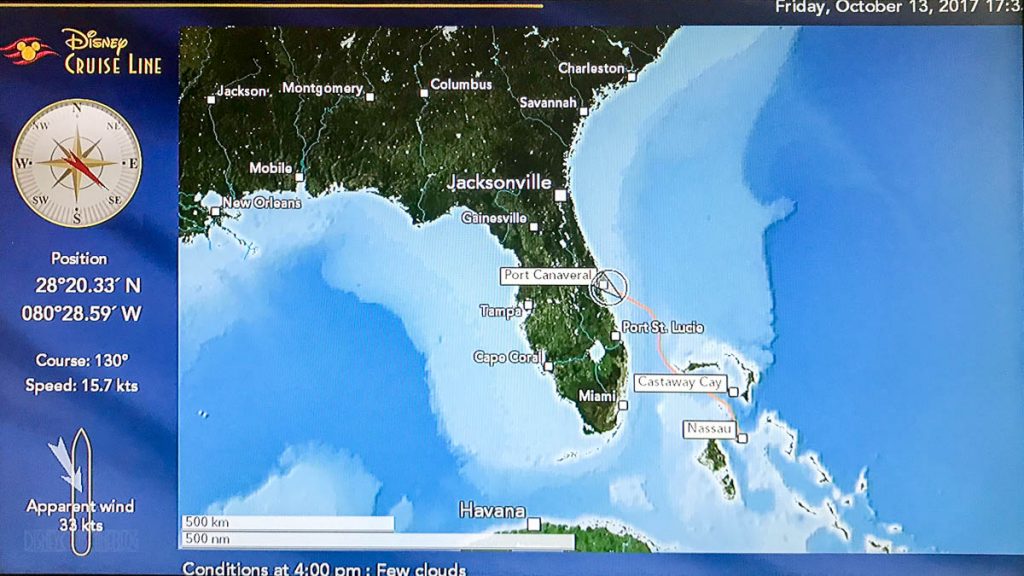 Today, we set off on our latest adventure, a 3-night cruise to the Bahamas aboard the “beautiful” Disney Dream — stern dent and all. Beautiful being in quotes because not a single announcement doesn’t include the adjective and being the PR friendly cruise blogger, I’ll play along. 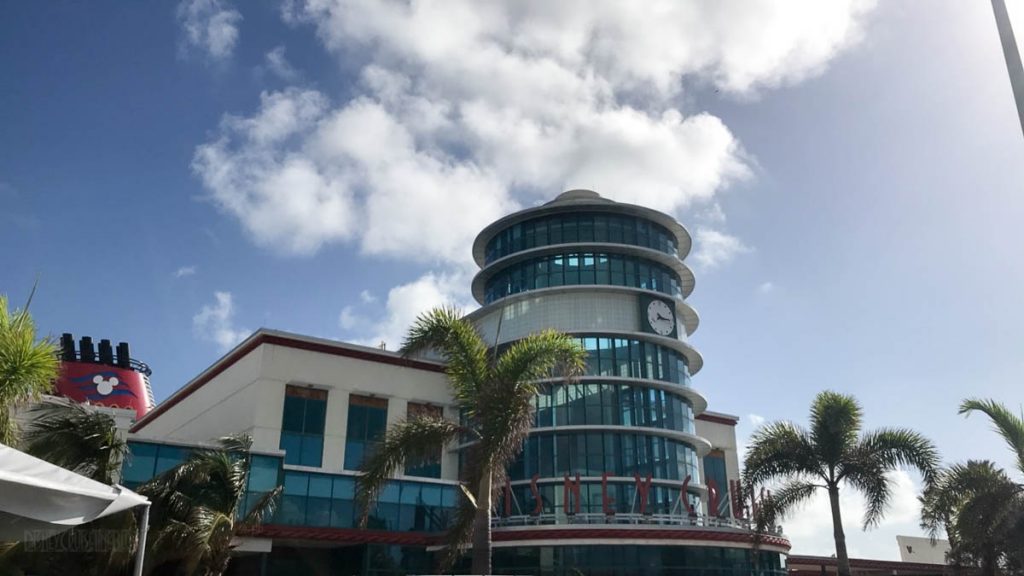 We arrived at the port around the 10 o’clock hour and since I was not paying attention, I took the exit to the other side of Port Canaveral thinking we were heading to Jetty Park. Anyway, the detour worked out as we were in the area a bit early and upon arriving at cruise terminal 8 & it was still closed. Closed, as in passengers were lining up on both the garage ramp and along the street. By the time we parked and dropped our suitcase off at the luggage drop, the port opened. The port runs like a well oiled machine; we were through security and checked-in in less than 20 minutes, including Isabelle getting her OceaneerBand, which is the new MagicBand 2.0 variety in red. 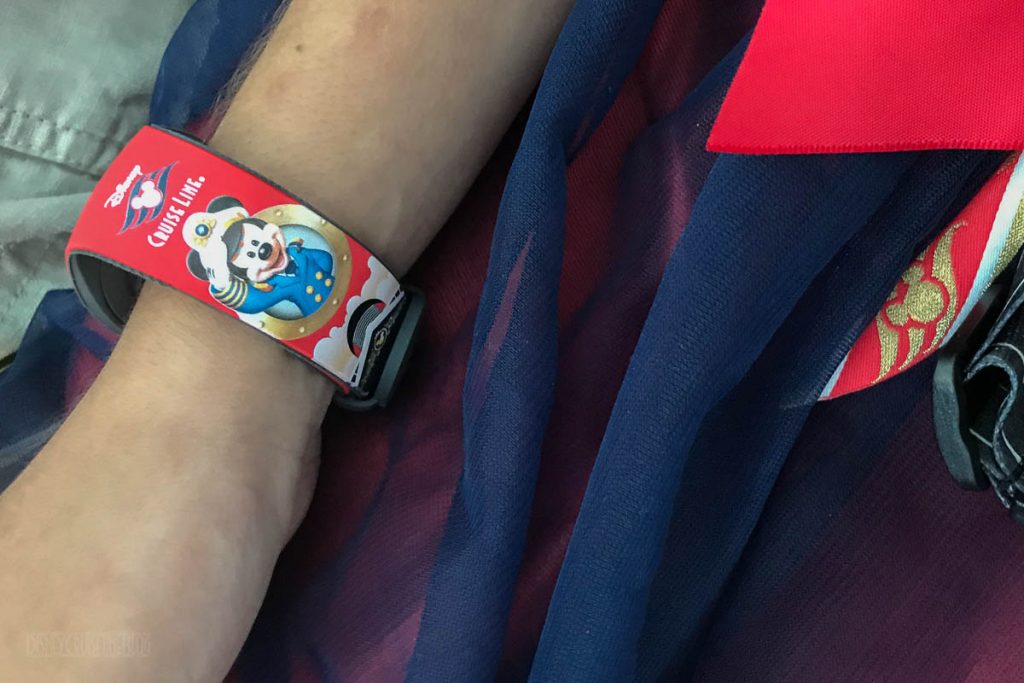 This is great because she can swap out the puck in the middle with one that will register at Walt Disney World. 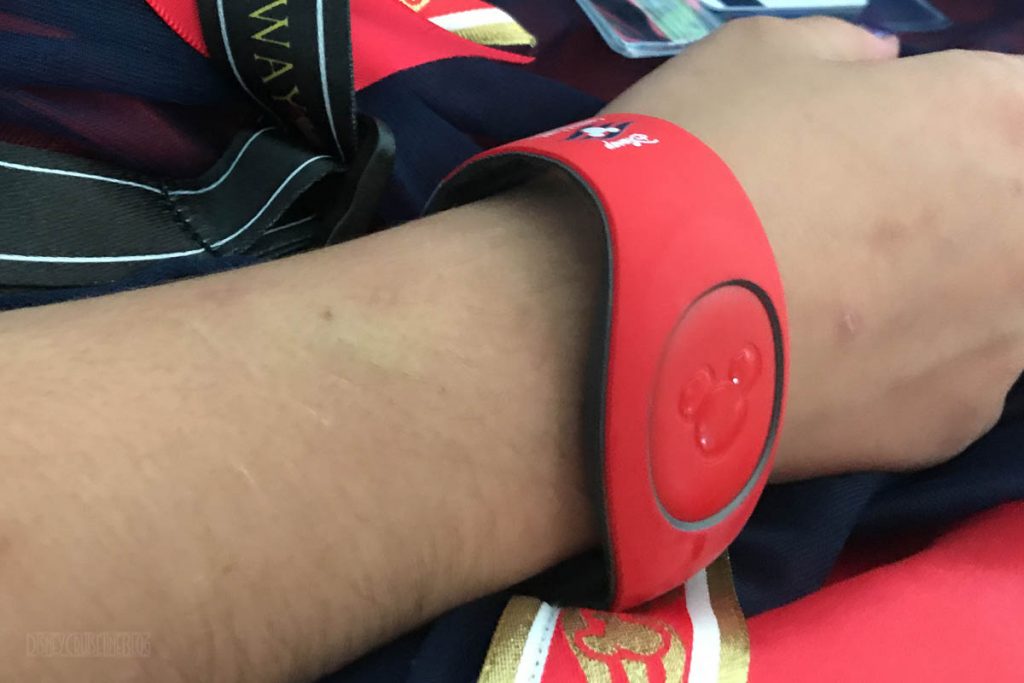 For some strange reason, Disney has never allowed guests to register OceaneerBands for use as MagicBands at the parks. To date, the only thing they have been good for following a cruise has been to unlock Disney Infinity extras, and we all know how well Disney Infinity is doing right now.

Boarding began promptly at 11:30 and our first order of business was lunch in Cabanas. The lunch offering were pretty good with a nice variety. 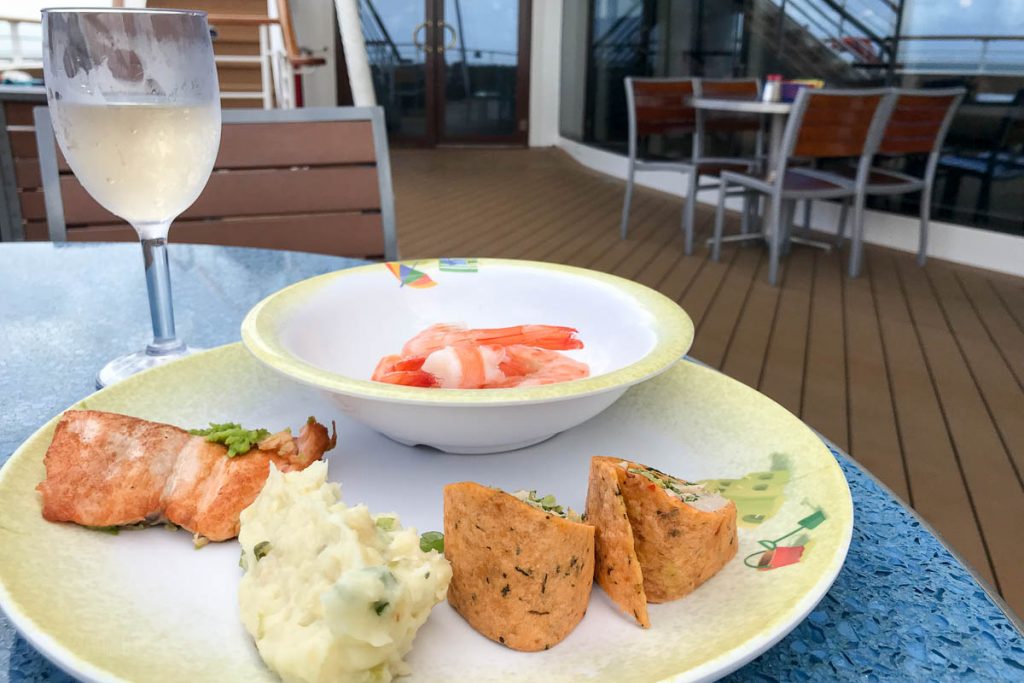 Following lunch, Isabelle went swimming while we hung out poolside before the rain moved in. 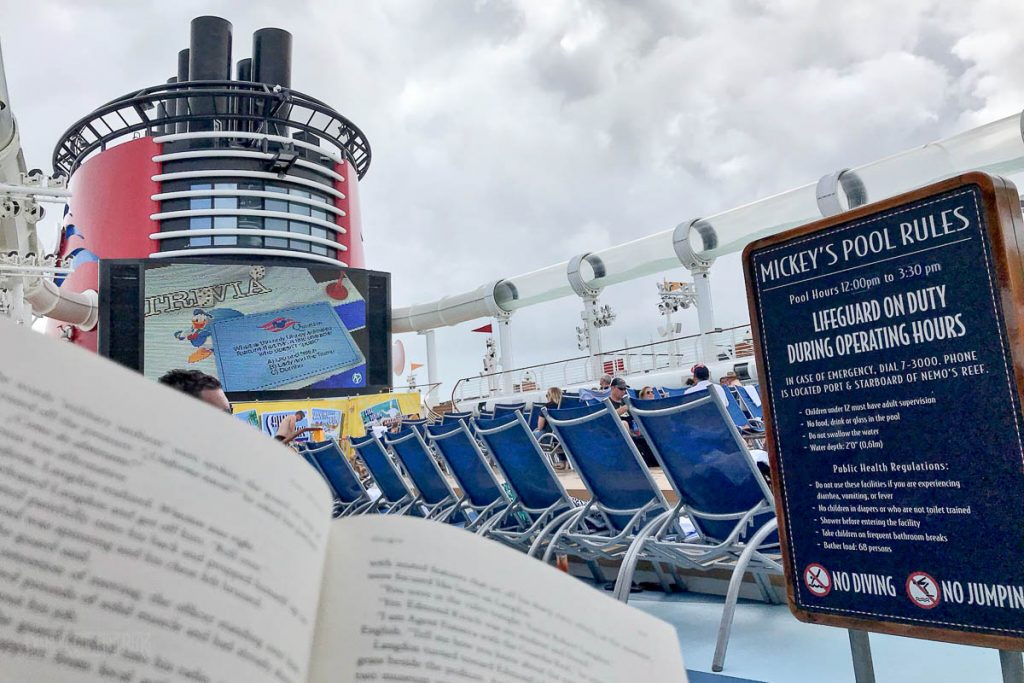 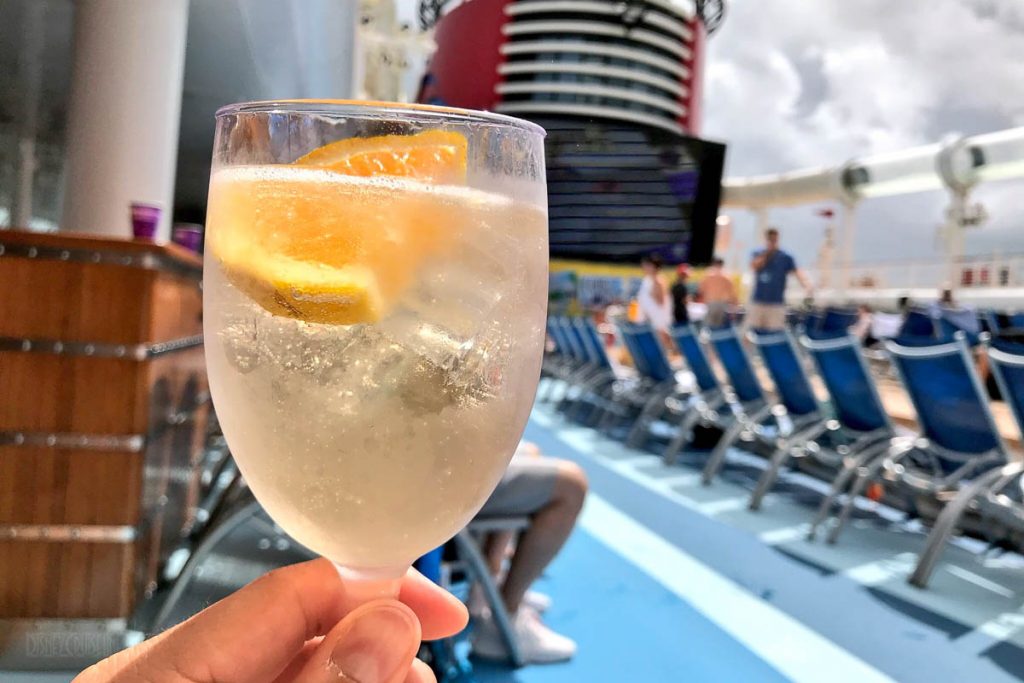 The dole whip with rum upgrade is still available. 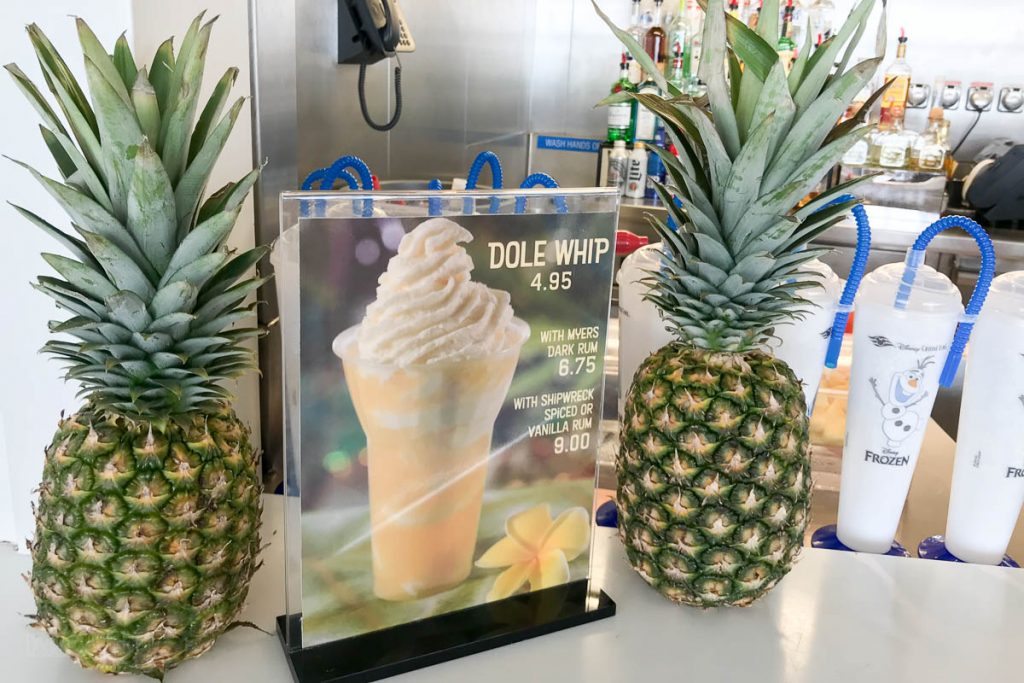 The rain arrived at a good time as the staterooms were opening up allowing us to drop off our carry-on bags. For the remainder of the afternoon, we hung out in the room and the verandah until muster drill time. Oh, yeah, we heard from a variety of readers that the red stateroom pillows were recently removed from the staterooms across the fleet. Confirmed. Although, we did speak to a friend who recently sailed on the beautiful Disney Dream that the blue version was still in her concierge room. 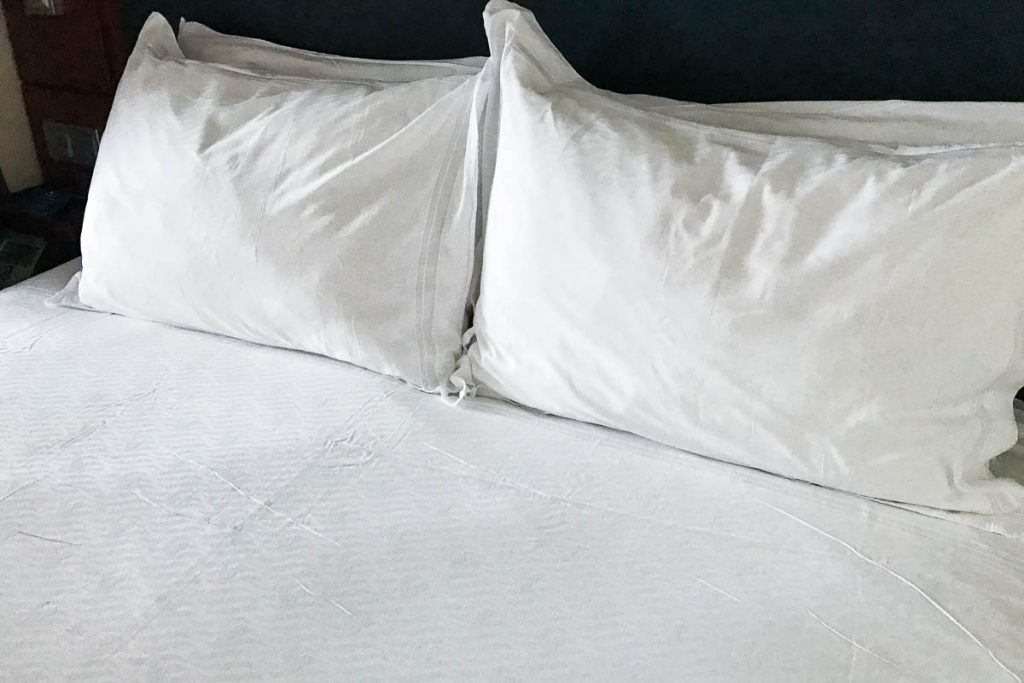 The pillows are still for sale in the shop, but the price tags are gone. 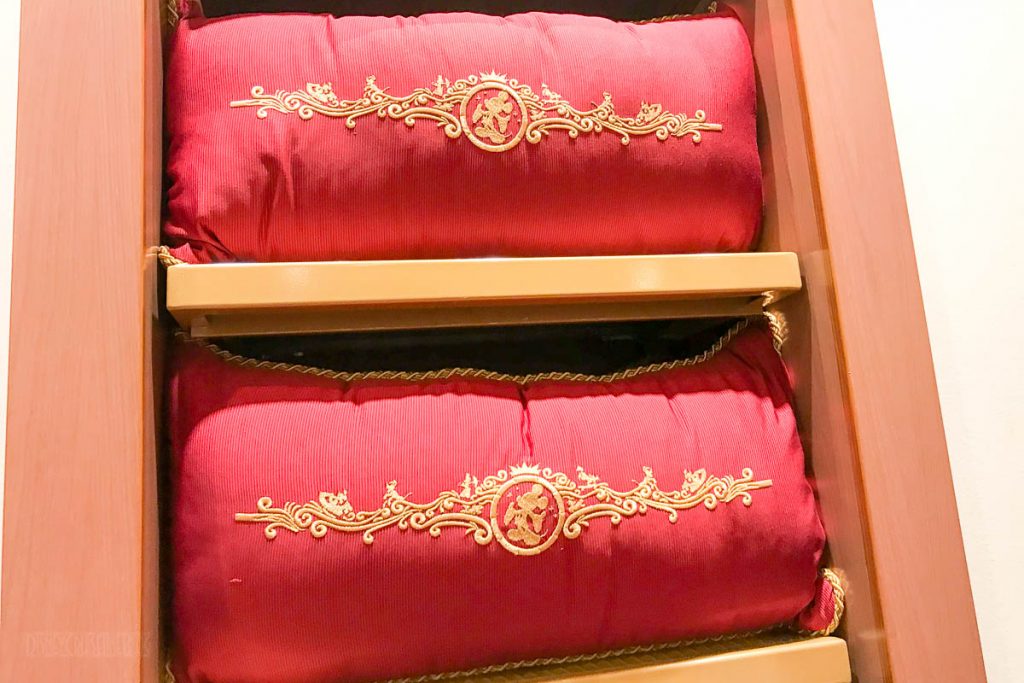 The ship is decorated for Halloween on the High Seas and the portholes are my absolute favorite touch. 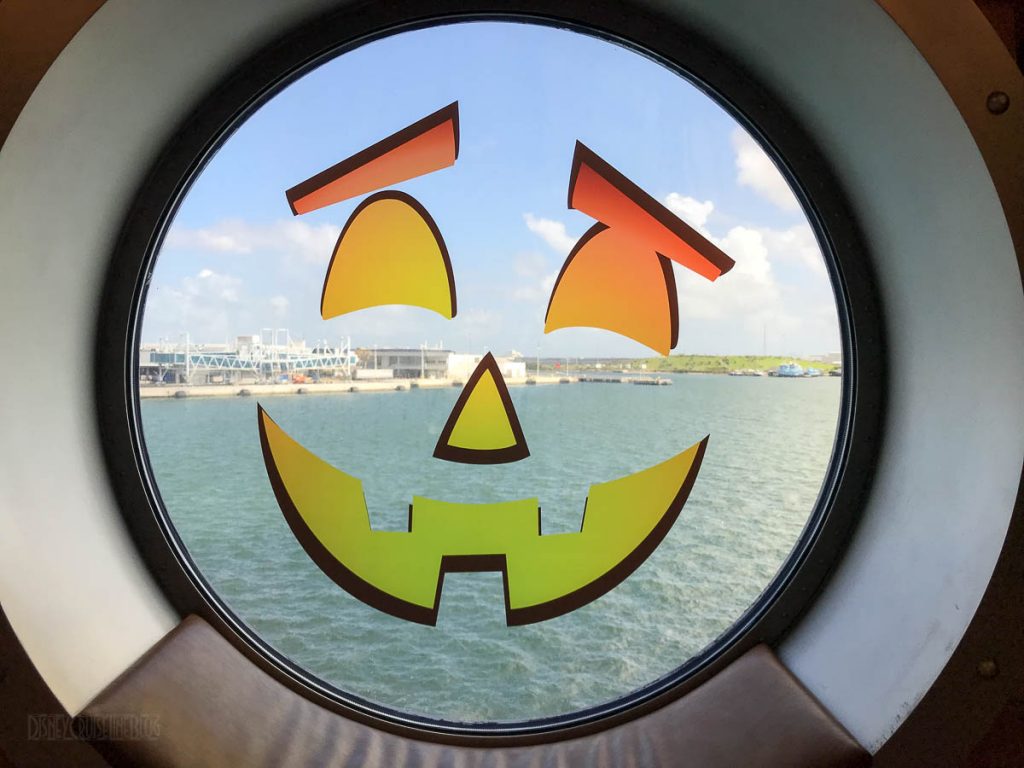 They are even selling the popcorn buckets from the Parks. 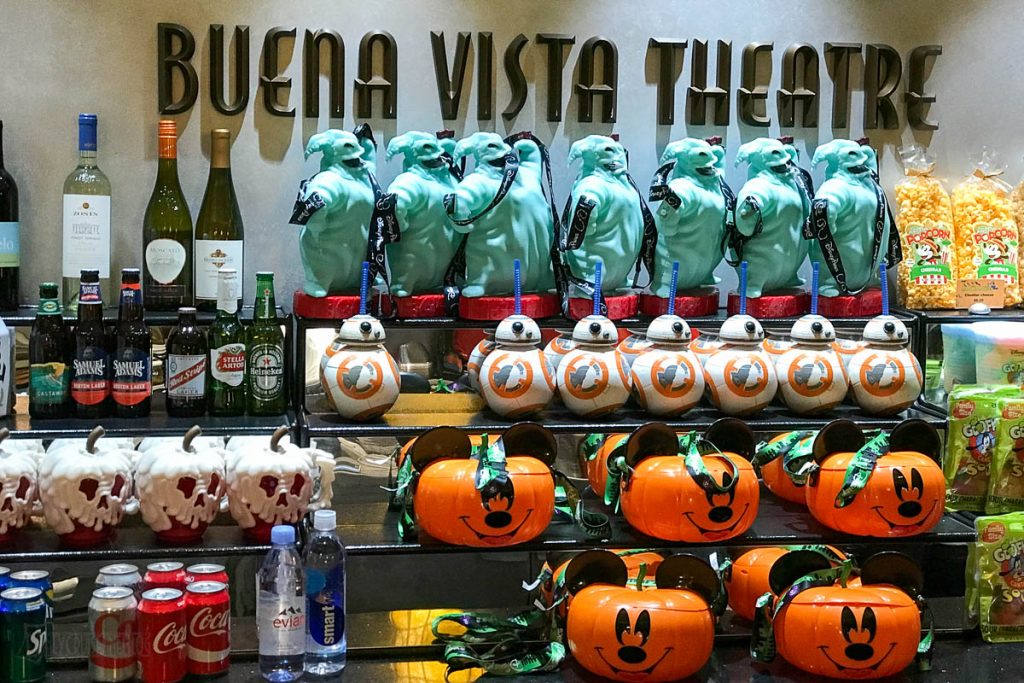 The rain kicked back in and the sail away party was moved into the atrium. 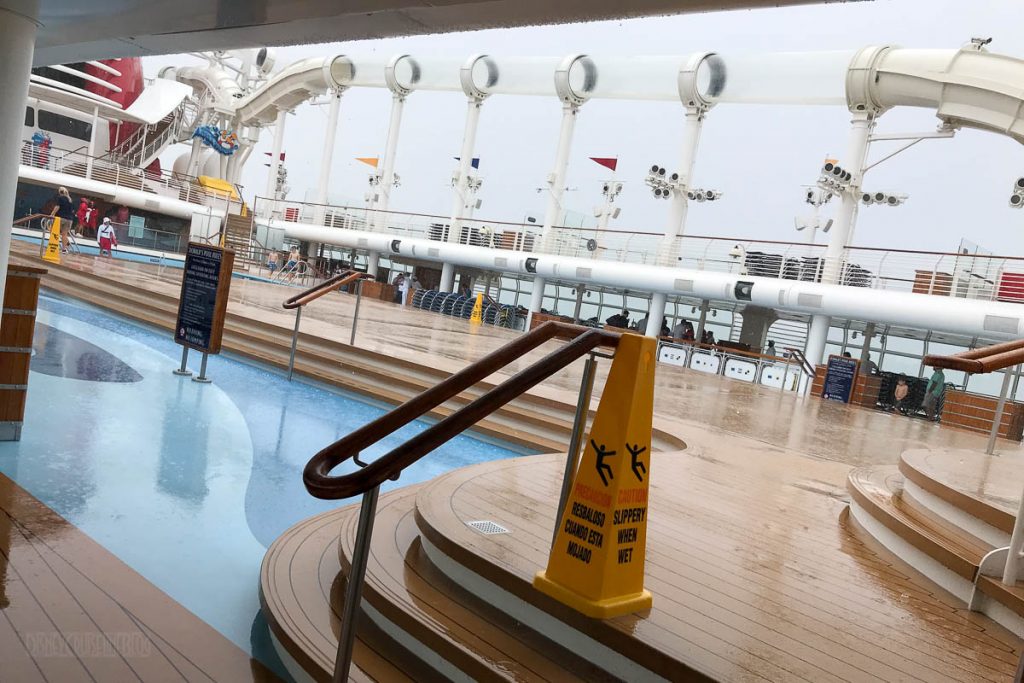 We walked through the atrium on deck 4 and determined this was not the place to be at this time. Since Emily & I had Palo dinner reservations, we headed up to Flo’s to get dinner for Isabelle, which she enjoyed in our stateroom while we got ready for dinner.

We arrived a few minutes before our reservation and had just enough time to browse the menus in Meridian. Good thing we did, as we discovered the hidden gem, the Sommelier Bin for $10! 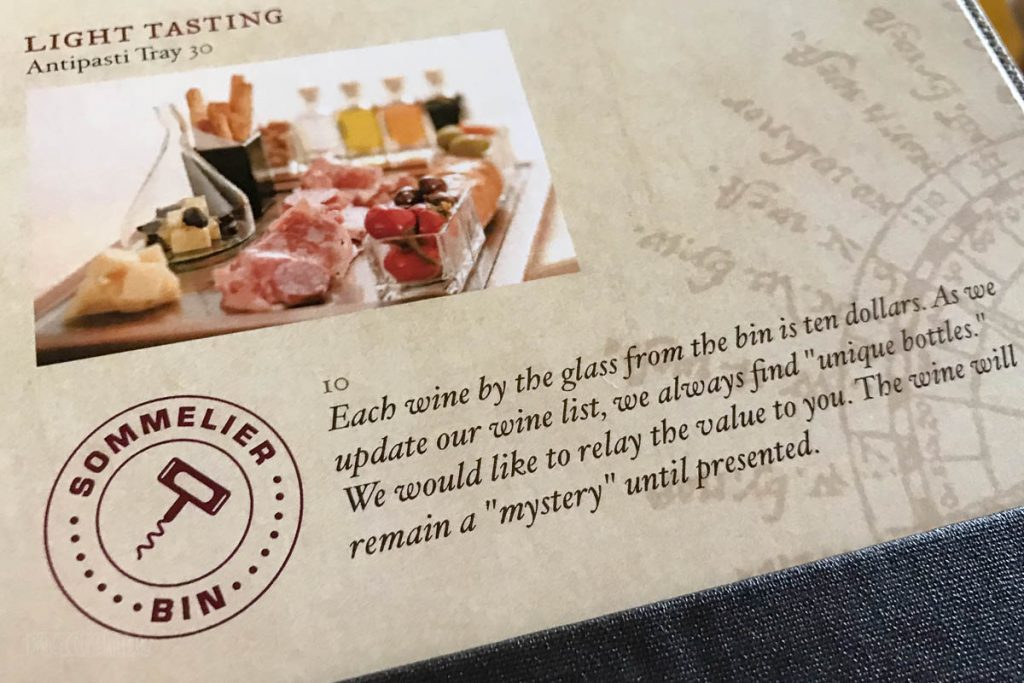 If you follow the blog, you know that typically on the beautiful Disney Dream, we forgo the main dining rooms. We usually do Palo dinner (because it is an included benefit for Platinum Castaway Club members), then typically dinner on deck, room service, or Cabanas, then Remy dinner on the last night. On the four night cruises, we add in Remy brunch. Some people think this is crazy, but it’s what we like. We cruise enough that sometimes it’s actually nice not to be held down to a routine. Isabelle also doesn’t care either way.

We had a 6pm Palo dinner reservation, and brought our platinum gift of a bottle of Prosecco with us to enjoy along with dinner. We were seated by the windows, and noticed that although the restaurant was fairly empty, we were kind of packed in like sardines in the row in front of the windows. I realize that this is because sitting by the windows affords the best views, but it felt kind of crowded. In this case, it was necessary as the second room was empty.

Our server was fantastic. One of the best we have ever had. She knew that we were repeat cruisers and saved us all the spiels and upsells. It was fabulous.

We started with the standard bread basket of garlic pizza bread, parmesan lavash, & breadsticks, along with the antipasto plate which we had drizzled with chili oil. 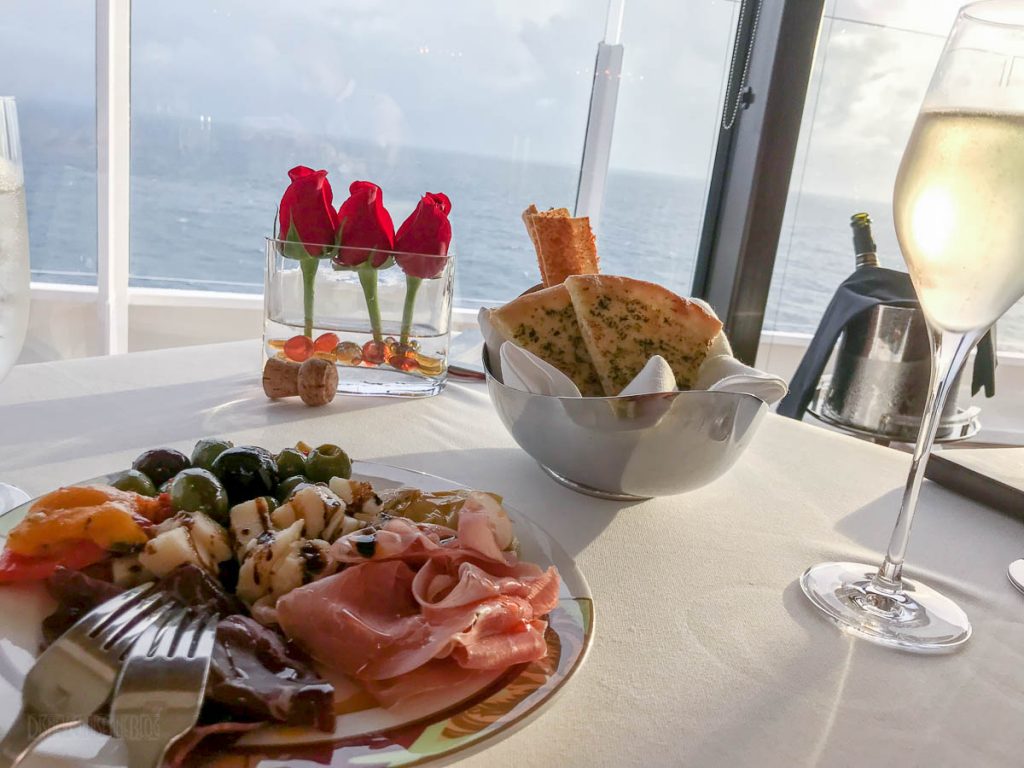 Emily ordered the calamari appetizer, and the scallops for her entree. I went with the arugula salad with a lemon dressing and the Dover sole for my entree. 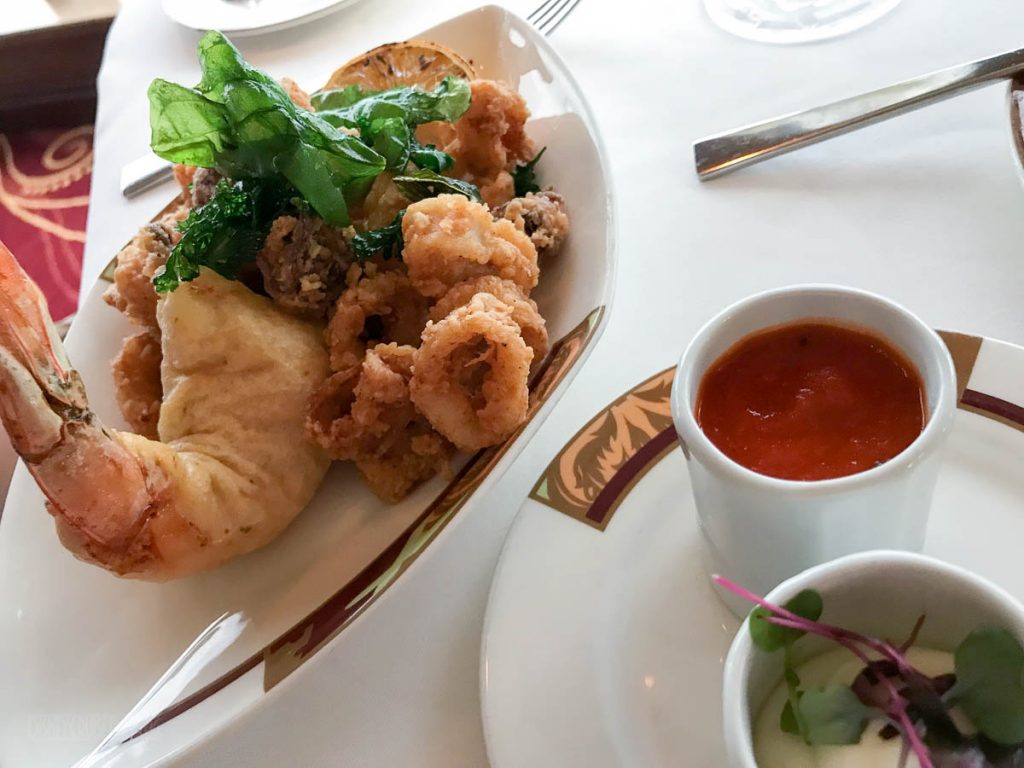 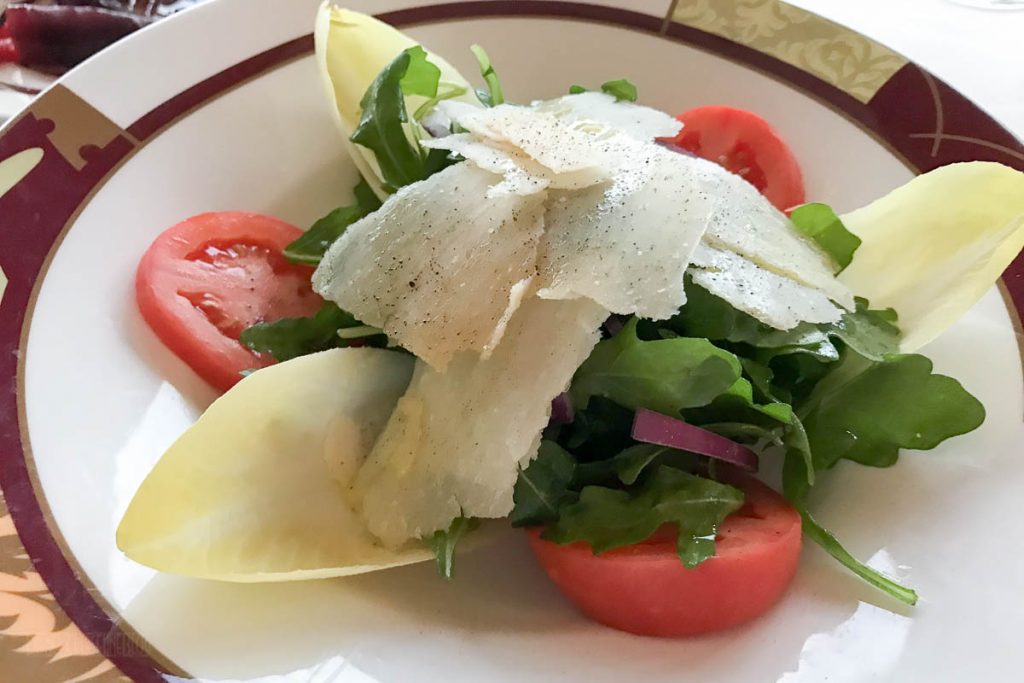 Unfortunately, all of these items left much to be desired. Things seem to have taken a bit of a downward spiral in quality through the years. The calamari was heavily breaded and fried, whereas in the past it was a much lighter breading and more of a flash fry. The breading on the prawn was probably supposed to be a tempura, but it was flavorless sadly. Emily had an undercooked scallop, but she was already pretty full after 1/2 of the calamari, so she just left it on the plate. 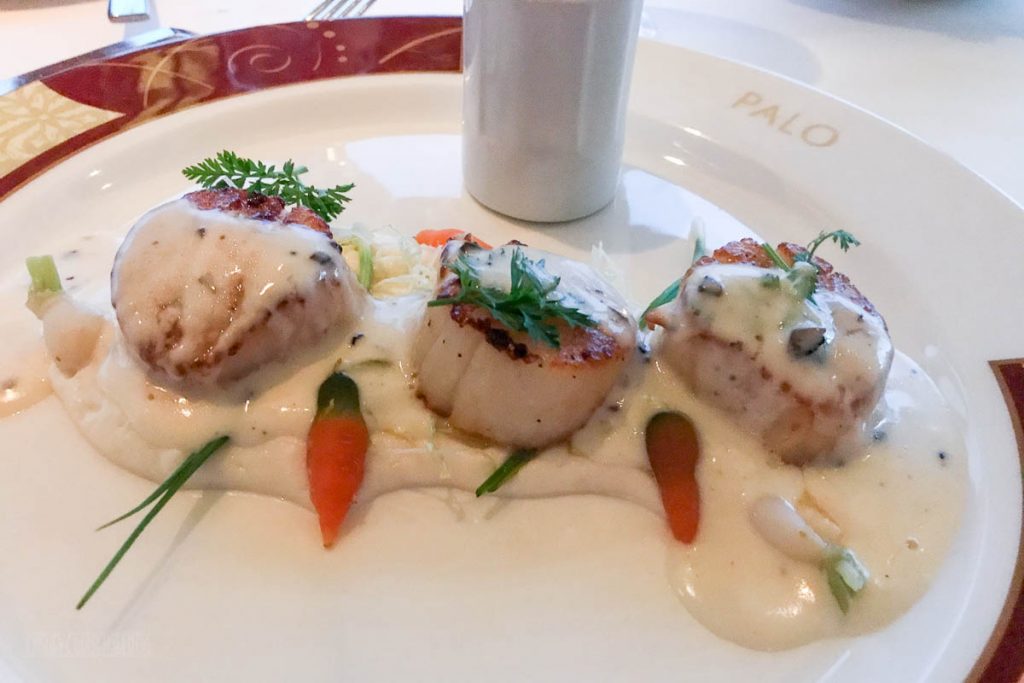 The sole arrived at the table and was painstakingly deboned and plated. I give our server credit, it is not an easy task and even tougher in low lighting. She did a perfect job, I did not encounter any lingering bones. The fish was cooked perfectly, but it was over saturated with butter. 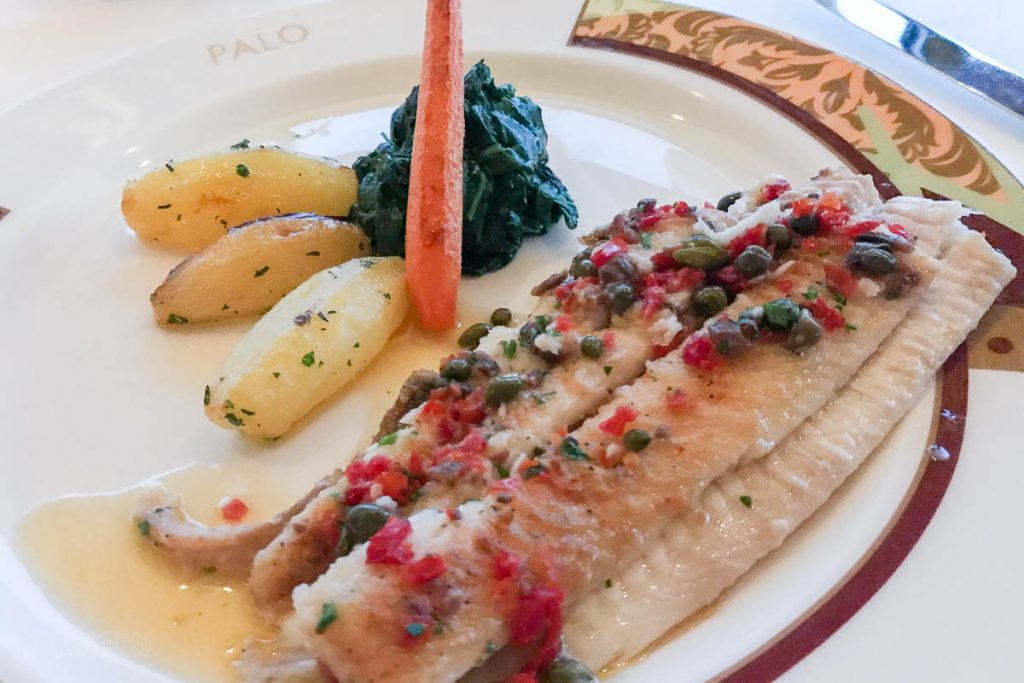 The table next to us was a table of 6 from Tennessee and they were first time cruisers. Since we were all seated so close, we could hear the exchanges between them & their server. One of the diners asked for a sharper knife to cut his meat. When he was brought another knife, it still wouldn’t cut his meat and his wife shared some of her beef tenderloin. The server came by and he was right – why was the meat so tough that he couldn’t cut it with a knife? It was not ordered well done and he said it was very tough. We realized that it wasn’t just us who had feelings of lower quality, as the table next to us experienced the same. To Palo’s credit the manager did attempt to correct the situation. 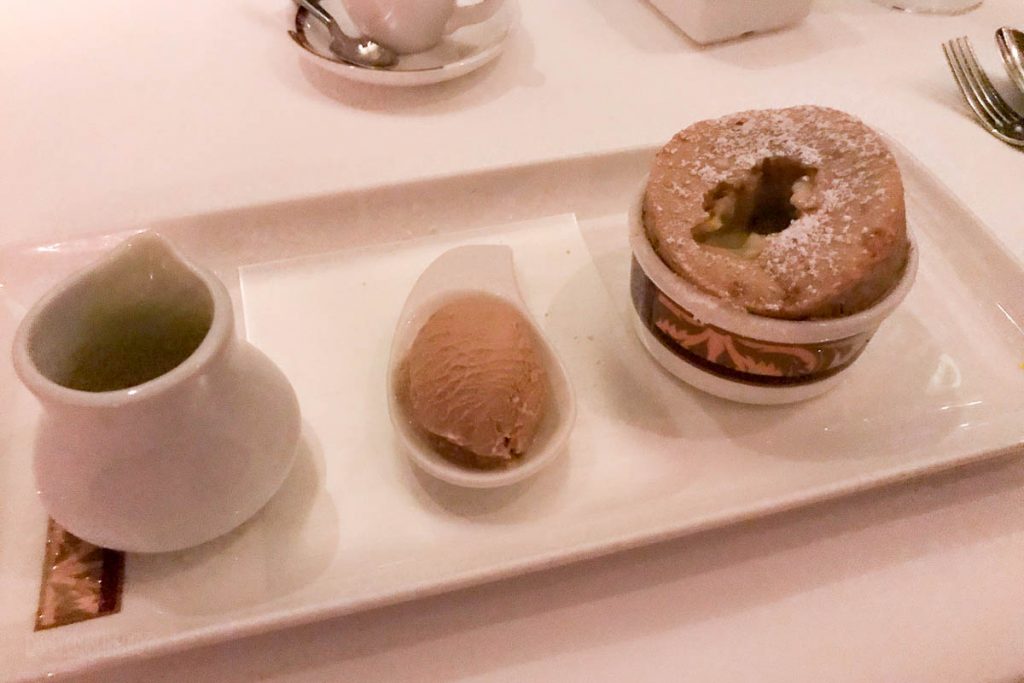 Now, all was not lost. The real gem of the meal was the dessert. Disclaimer, we are not big fans of the chocolate soufflé, but we are fans of most things flavored with almond, cherry or amaretto. We actually really enjoy the Grand Marnier soufflé that is served in the main dining rooms. When we had heard of the new amaretto soufflé, we had to have it. 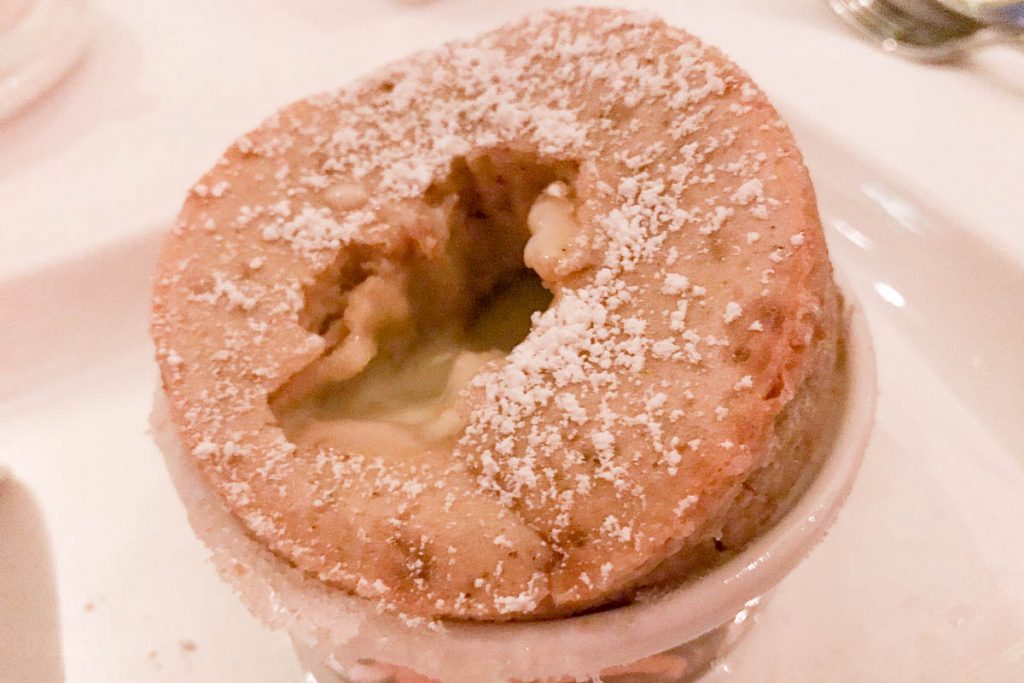 Blogger fail, we both ordered the same things & weren’t even presented with dessert menus. However, this soufflé was fantastic. It was served with a vanilla sauce and a mocha gelato. Em only had room for a few bites, but she loved it, as did I. This is a huge hit. Considering we love it, I am sure it will see the same fate as the Peach Almond Soufflé that was briefly available at Palo Brunch. 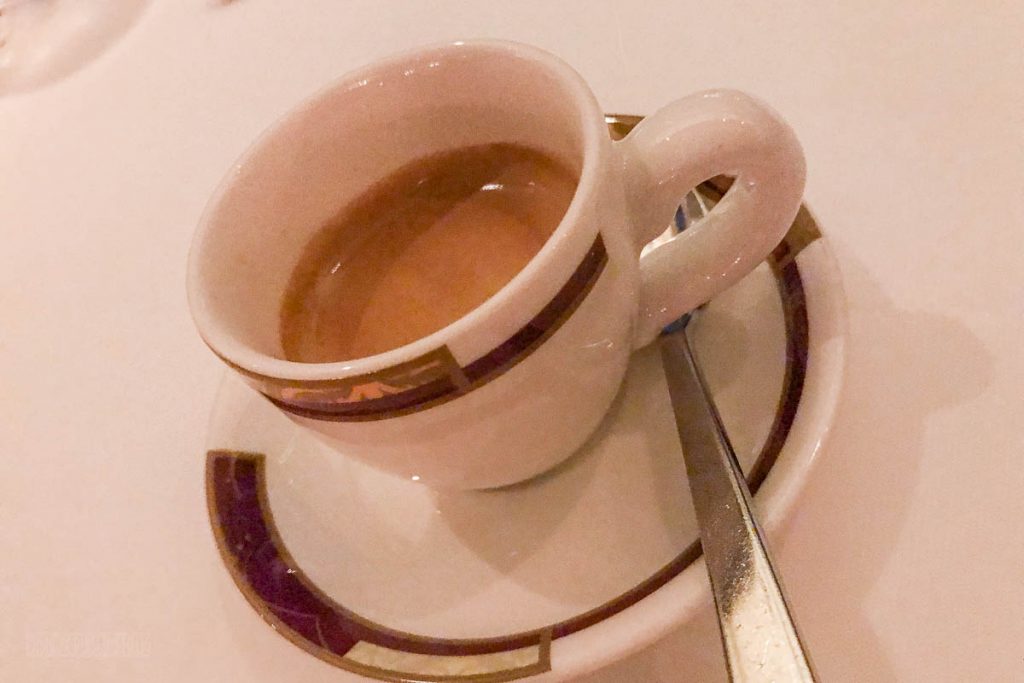 I decided to top the night off with an espresso, and that hit the spot. Em loves the Palo iced tea because of the ice cubes made out of iced tea, thus not allowing the tea to dilute. Delicious.

The Palo manager & chef visited each table. We highly complemented the server and the soufflé, because those were the stars of the night.

While we were at Palo, Isabelle started 3 simultaneous Midship Detective agency games & then went to the kids club & lab. She was told to be back by 8:30pm, and she was back around 8:20pm. I must admit, we love her having the freedom to check in and out on her own (& so does she!).

We were scrolling through the on demand movie offerings in the stateroom and we broke the TV… Well, we managed to lock up the on demand system which required a call to guest services that resulted a visit by our awesome stateroom hostess who then escalated our case to the next level of support. About 15 minutes later a gentleman arrived and quickly diagnosed and resolved the issue. Turns out the IR receiver was the issue. All he had to do was unplug the USB cable from the box behind the TV, and plug it back in. Easy fix, that I’ll remember now.

We watched a bit of the Syracuse vs Clemson game, but we all fell asleep well before that upset.