During Port Canaveral’s August Commissioners meeting, a status update was provided on the progress of the roofing and renovations to Disney Cruise Line’s terminal (CT8). The ongoing $1.8 million project included the re-roofing, replacement of existing kalwall systems, interior painting, and wet sealing of existing windows.

As of the August status update, the roof replacement portion has been completed. 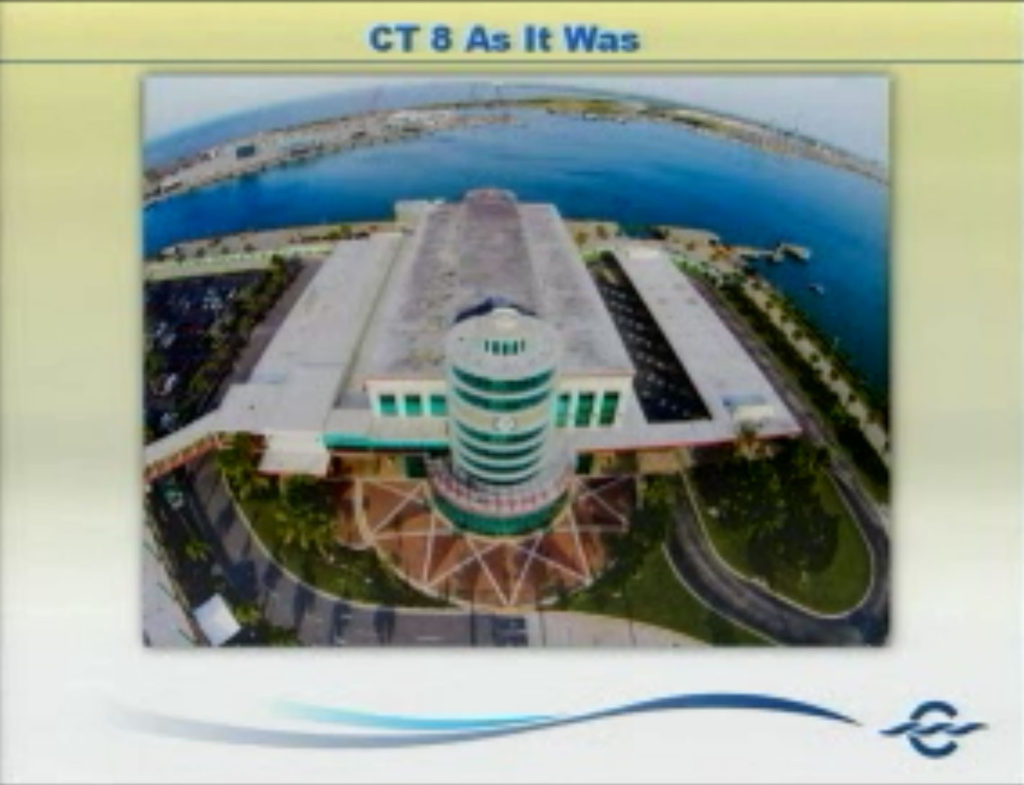 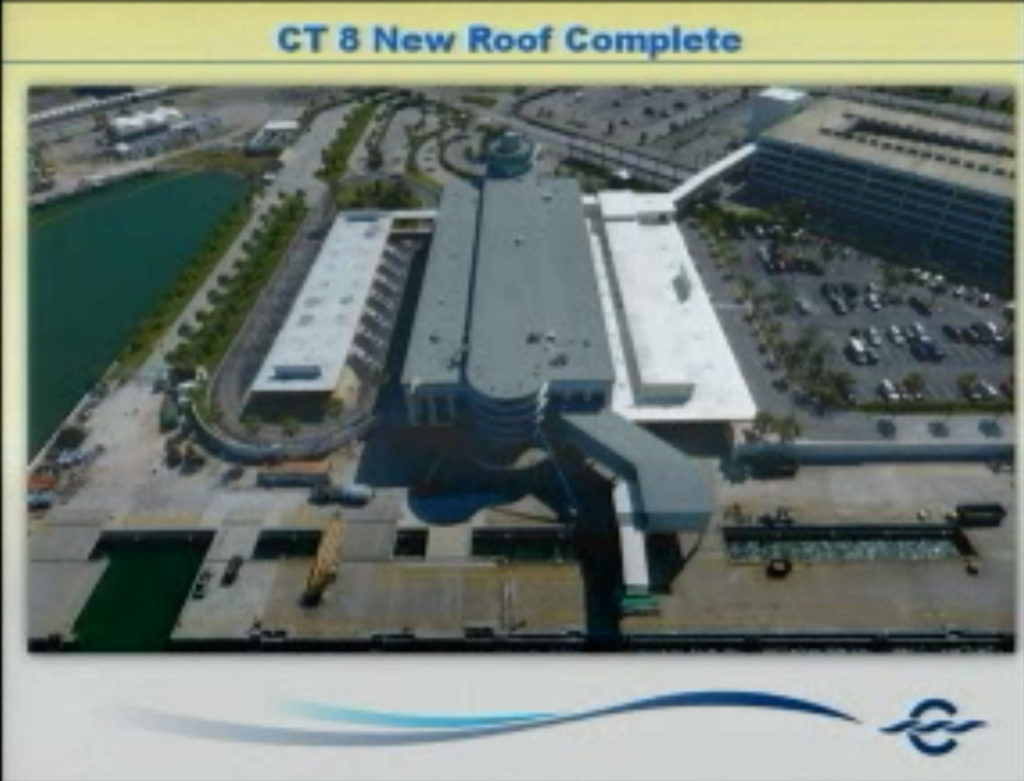 The kalwall portion of the project is 80% complete and the interior painting is 85% completed.

The renovation project timeline originally planned for a May completion, but was extended through August as work was only possible on non-cruise ship days. 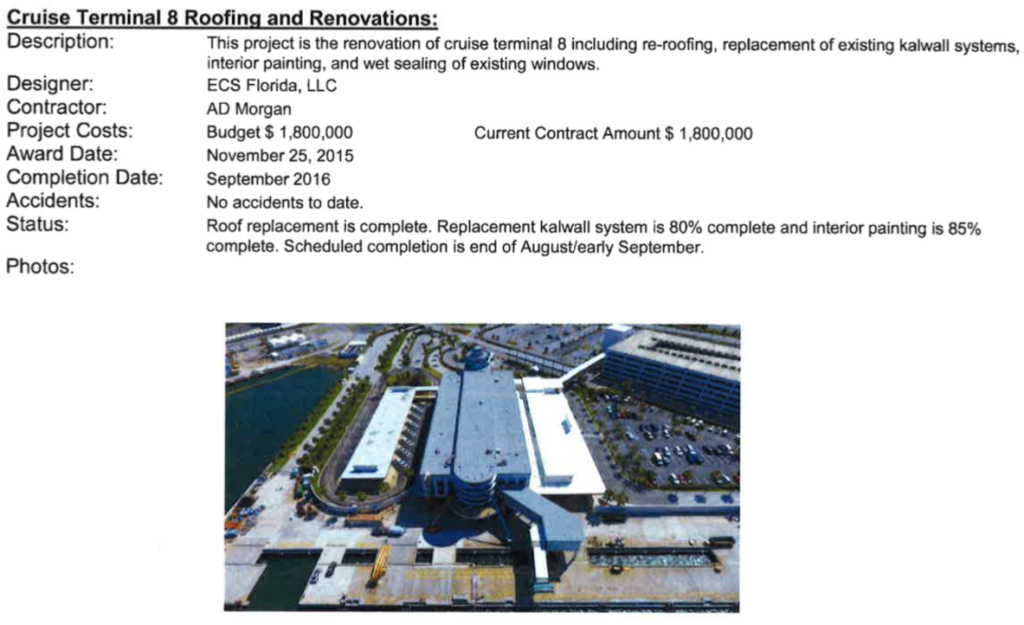 In terms on new business, commissioners unanimously voted to approve Agenda item 12, the removal and replacement of a HVAC chiller at Cruise Terminal 8 not to exceed $360,000. It has been determined due to the age and environmental conditions, the chiller that supplies chilled water to CT8 has deteriorated beyond repair and is in need of immediate replacement. Due to salt air exposure since 2007, the coils have disintegrated to the point that the chiller will no longer function unless a constant supply of water is applied to the coils, which once that process start, experts say there is a 30-60 day window to replace the chiller prior to failure. Secondly, the harsh seaside environment has caused the frame and the chiller to rust beyond repair.

Port Canaveral shared a look at the cruise revenues by line for FY2017. Royal Caribbean accounts for 35% followed by Disney with 28% just in front of Carnival at 26%. 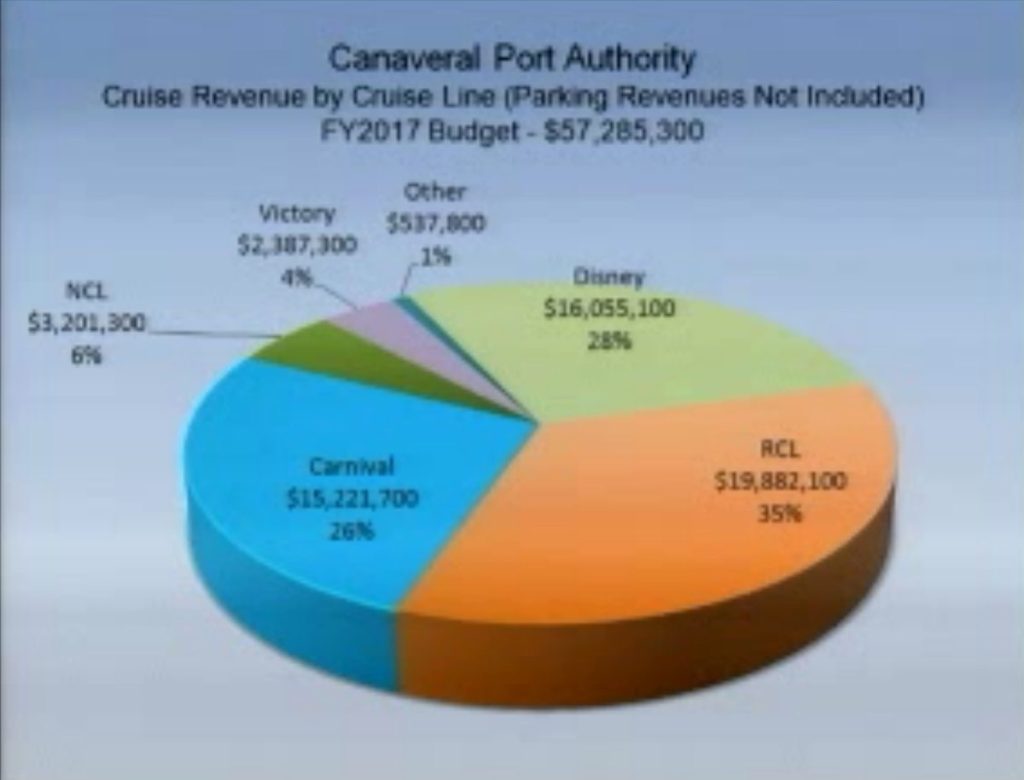 The proposed budget had the following analysis and expectations of Disney Cruise Line for their FY2017.

Disney will continue to home-port 3 ships at Port Canaveral. The Disney Fantasy will be home-ported for the fourth straight year with 51 sailings in FY2017 representing $6.1 million in revenue. The Disney Dream will continue in FY2017 wit the same 101 sailings as FY2016. The Disney Dream is expected to generate $12.6 million in revenues for FY2017. The Disney Magic will be replaced with the Disney Wonder which will make 30 home-port calls in FY2017 generating approximately $1.5 million in revenues. The Disney Magic made 24 home-port calls in FY2016. Disney Cruise Line is expected to generate total cruise revenues of $20.1 million from 182 home-port calls. In FY2016, Disney ships made 176 home-port calls. Parking revenues associated with Disney Cruise Line are anticipated to be approximately $4.1 million and are included in the above revenues by ship. It is anticipated that Passenger Facility Charges paid by Disney for past improvements to Cruise Terminal 8 will satisfy the provisions of the Disney/Port Canaveral reimbursement agreement in FY2017. This amount is anticipated to decrease total cash flow from the Disney contract in the amount of approximately $1.5 million. This amount could vary based on the number of actual Disney passengers in FY2017.