The new ships will have about 1,250 staterooms and will be around 135,000 gross tons, slightly larger than the Disney Dream and Disney Fantasy. Below is a closer look at the renderings of the newly announced Disney Cruise ships along with the current fleet. 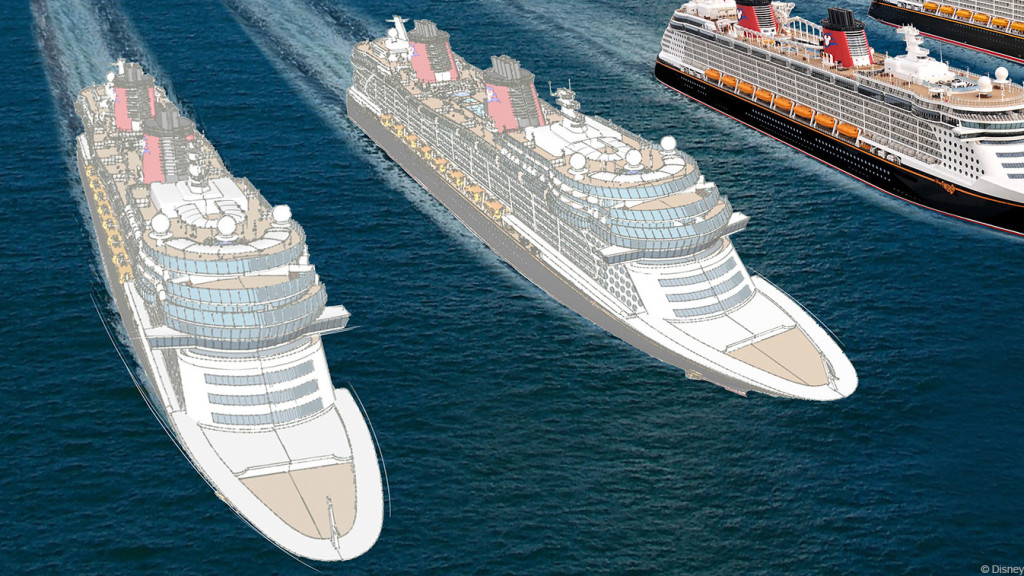 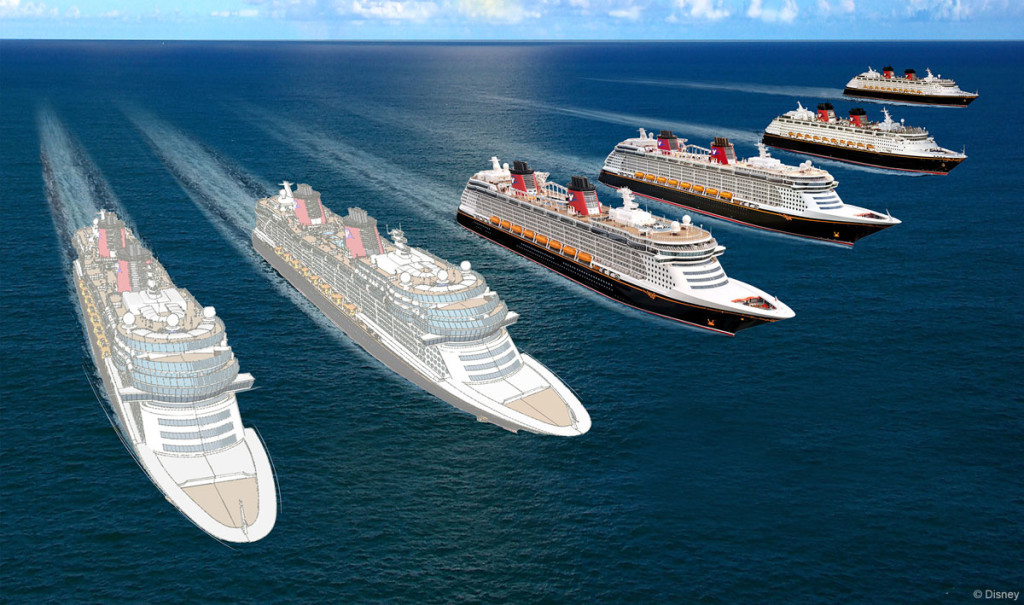 At this time, this is all the information that has been made available. Well, other than the rumors that have been ebbing and flowing over the last few years. New pages have been added to the site for Ship #5 and Ship #6. As information becomes available we will pass it along. The internal name for the new builds is Project Triton making the new builds the Triton Class.

CHICAGO (March 3, 2016) – The Walt Disney Company announced plans today to build two additional cruise ships, each of them showcasing the immersive family entertainment, enchanting storytelling and unparalleled service that only Disney can deliver.

The company has entered into a memorandum of agreement with the Meyer Werft shipyard in Germany. The schedule calls for the new ships to be completed in 2021 and 2023.

“We pride ourselves on the unforgettable vacation experiences we deliver to our guests each and every day, and the expansion of our Disney fleet will allow us to create even more magical memories for families at sea and in incredible cruise destinations around the world,” said Robert A. Iger, Chairman and Chief Executive Officer, The Walt Disney Company.

Each new ship will be approximately 135,000 gross tons – slightly larger than the newest Disney Cruise Line ships, the Disney Dream and Disney Fantasy – and each is currently planned to include about 1,250 guest staterooms. While design plans, ship names and itineraries are still in development, the Walt Disney Imagineering team is already dreaming up exciting new ways to create the world’s most magical oceangoing adventures.

Since first setting sail in 1998, Disney Cruise Line has provided a quintessential family cruise vacation experience that combines the magic of Disney with the thrill of exploring different parts of the world. Guests step aboard majestic and beautiful ocean liners to enjoy legendary Disney entertainment, exquisite dining, spacious and well-appointed staterooms and magnificent public spaces.

The company also has been an industry leader in innovation and game-changing creativity. With the launch of the Disney Dream and Disney Fantasy in 2011 and 2012, the company introduced several firsts for the industry, including a water coaster at sea (AquaDuck) and virtual portholes in interior staterooms (Magical Portholes) that provide real-time views of the sea as well as sightings of animated Disney characters.

Plans for the expansion of Disney Cruise Line come during a period of momentous growth and innovation for Disney properties around the globe.

“The expansion of Disney Cruise Line only adds to our excitement for the unprecedented growth taking place across our vacation destinations, from new Star Wars experiences coming to the Walt Disney World and Disneyland resorts to the 25th anniversary of Disneyland Paris and the grand opening of our newest park, Shanghai Disney Resort,” said Bob Chapek, Chairman, Walt Disney Parks and Resorts.

More details about the Disney Cruise Line fleet expansion and onboard offerings will be announced at a later date.