Over the course of the past few weeks, there has been a change to the Grand Cayman port calendar we looked at in January. If you recall, when we analyzed the port calendars, there appeared to be multiple conflicting calls showing the Fantasy weekly in St Maarten and every other week in Grand Cayman. Since she cannot be in both regions at the same time, this led to the idea that the Fantasy may have been a placeholder on the St Maarten calendar for the Magic or Wonder sailing alternating Caribbean itineraries opposite the Fantasy. As of February 4, 2013 the [Disney_Fantasy] no longer appears on the Grand Cayman port calendar after November 11, 2014. This slight change offers a clearer picture for the Fall of 2014 and the first half of 2015. 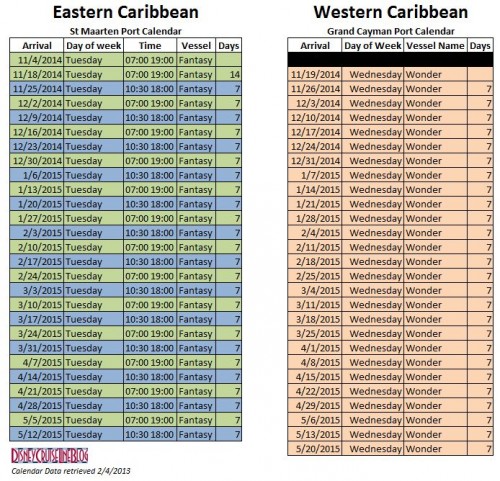