Disney Cruise Line is contacting guests booked on the upcoming 14-Night Panama Canal Cruise scheduled to leave Miami on May 1st to inform them of a stomach-related-illness affecting more than 3% of guests aboard the current Disney Wonder sailing, a 4-Night Bahamian cruise.

The CDC is monitoring the situation aboard the Disney Wonder. At the time of publication, the CDC reports 92 of 2679 (3.43%) passengers and 5 of 991 (0.5%) crew members have reported being ill during the voyage. The predominant symptom is vomiting and the suspected reason is norovirus, but the CDC has not listed a reason as the investigation is pending.

Actions: In response to the outbreak, Disney Cruise Line and the crew aboard the ship reported the following actions:

According to the email below, DCL is following a comprehensive plan to manage the situation and prepare the ship for the next sailing. 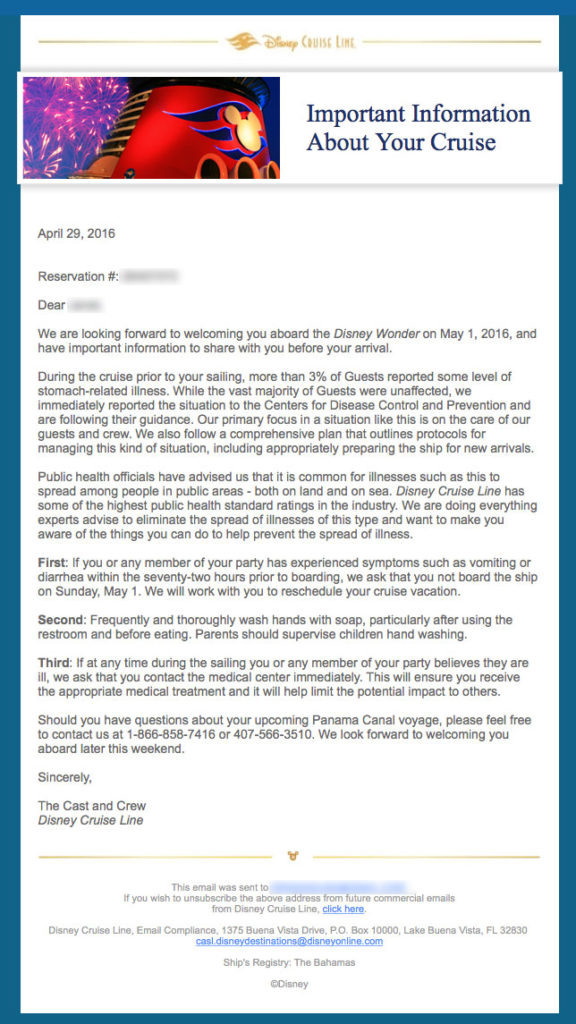 CruiseLawNews.com published a picture of an AGE UPDATE posted in a crew area. The notice states “We have reached over 3% of Guest/Crew being isolated, therefore we are currently at HIGH LEVEL of Virus Response Matrix.”

According to CDC records, this is the first case affecting a Disney Cruise Line ship since 2002 when Norovirus impacted the Disney Magic.

Although you asked to remain anonymous, I’d like to thank the individual who shared their copy of the email.

May 2, 2016 | CDC Investigation Update on the Disney Wonder

As of May 2 the CDC’s report the shows the number of people affected have increased by 48 (131 of 2680 (4.89%) passengers and 14 of 991 (1.41%) crew members) have reported being ill during the voyage. The predominant symptoms have expanded to vomiting and diarrhea.  The CDC still has not listed a reason as the investigation is pending.

On May 12, 2016, the CDC updated the investigation report with norovirus as the causitive agent following an inspectors May 1st assesment and evaluation of the onboard outbreak.

Reports from passengers sailing on the Panama Canal cruise indicate things onboard have returned to normal including self service.

52 Replies to “CDC Investigating a Stomach-Related-Illness Aboard the Disney Wonder UPDATE: Confirmed Norovirus”