A Day of Frozen Fun will return to the high seas this summer during select European and Alaskan voyages aboard the Disney Magic and Disney Wonder. DCL is promising to immerse guests in the animated hit with experiences such as a deck party, port adventures, meet and greets and more all inspired by the film.

During the schedule Day of Frozen Fun guests will be transported to the land of Frozen when the ship is transformed into a winter wonderland and a day of frozen fun culminates with an extravagant celebration with friends from the Kingdom of Arendelle. 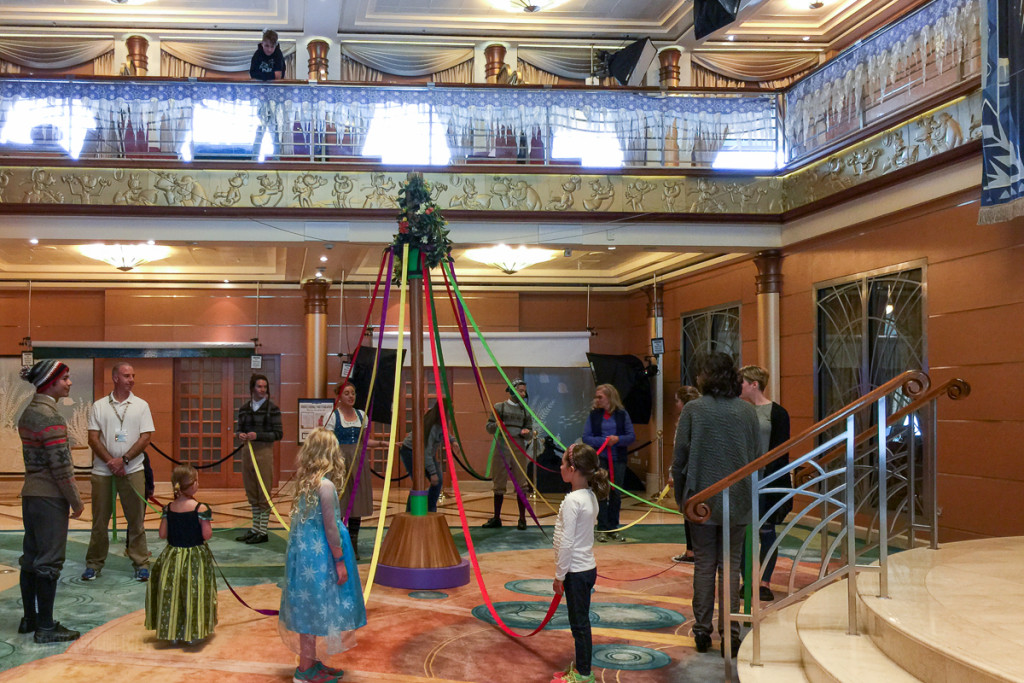 On one special morning, guests will awake to discover a magical freeze has overtaken the atrium lobby with sparkling icicles adorning the grand staircase, resembling the majestic mountain-top ice palace of Queen Elsa.

Icy adventures and fun for the entire family throughout the day include all-new meet and greets and themed experiences: 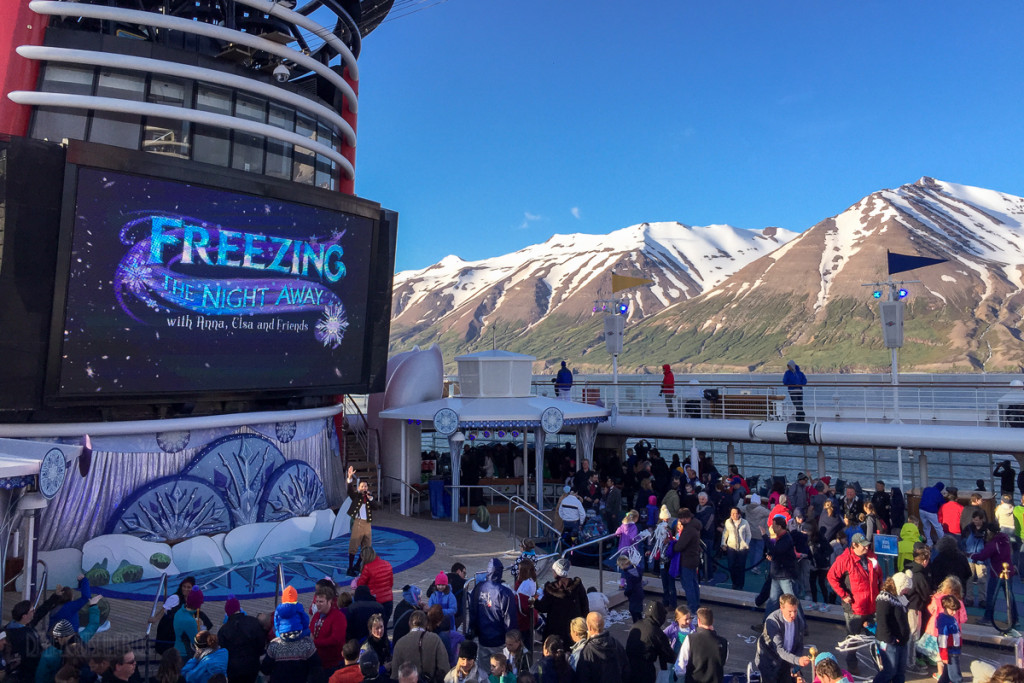 The evening fun kicks off with “Freezing the Night Away with Anna, Elsa and Friends,” a family-friendly interactive deck party featuring the famous royal sisters of Arendelle and their fun-loving Nordic companions. By now, the freeze has spread to the upper decks of the ship, with giant snowflakes, icicles and snow-covered rocks.

The celebration begins with a high-energy line dance, set to the movie’s ice cutting scene, featuring the arrival of Kristoff, impressively twirling his ice picks, and Princess Anna.

Anna and Kristoff’s beloved companions, Sven, the trolls and Olaf, make virtual appearances at the party. Sven engages the crowd in reindeer games like “Sven Says” and the “Troll Stroll,” and Olaf leads a sing along to his signature song, “In Summer.”

Elsa arrives with a snowy gust of wind, calling on guests to sing “Let it Go” with her as she conjures up a wintry spectacle to cool things down for Olaf. In true Disney fashion, Elsa unleashes her magic, sending a chill through everyone as the powerful Academy Award-winning song echoes from the ship.

The evening concludes with more family dancing on the pool deck, followed by fun just for adults in the nightclub featuring dance performances and frozen specialty drinks.

Disney Cruise Line guests who travel aboard the Disney Magic to Norway, the land that inspired Arendelle from “Frozen,” have the opportunity to join exciting Port Adventures that bring this fairytale setting to life. One signature adventure ashore in Ålesund, Norway, created exclusively for Disney Cruise Line, immerses guests in the splendor and charm of Norway, with the help of Anna and Elsa, in an enchanting storybook village. 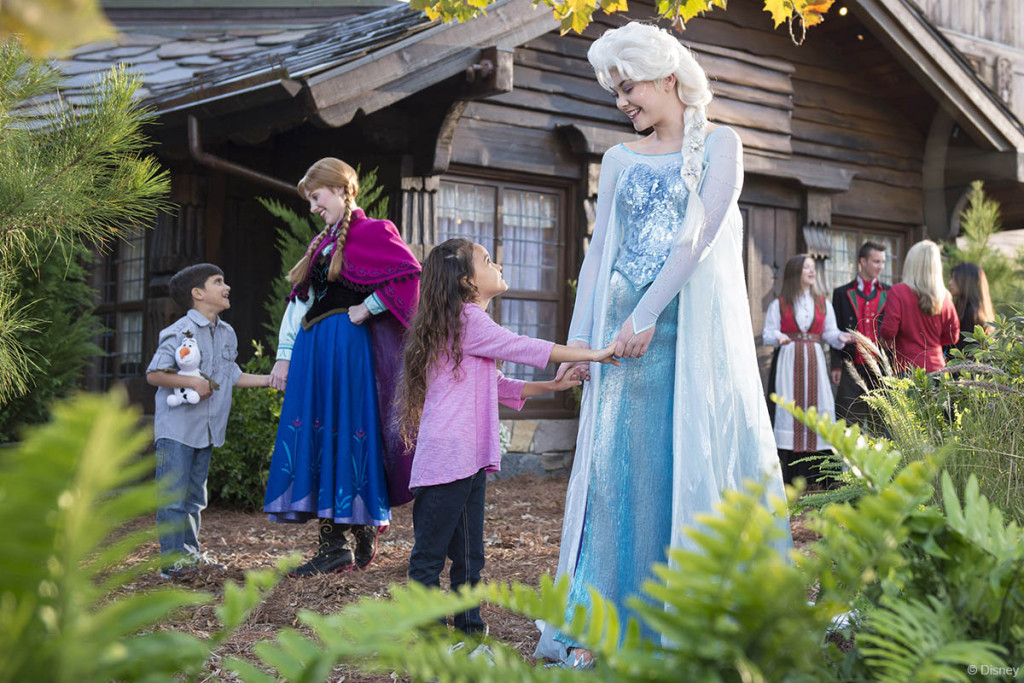 Aboard the Disney Magic, Anna, Elsa and Olaf are part of the line up of beloved Disney characters who together teach a young girl the power of her dreams in the Disney Cruise Line original production, “Disney Dreams … An Enchanted Classic.” Scenes featuring “Frozen” characters include renditions of three popular songs: “Let it Go,” “For the First Time in Forever” and “In Summer.” The show segment is a heartfelt, humorous and memorable tribute to the “Frozen” film, preserving its endearing and playful tones with an inspiring message. Special effects are magical, with a snowfall throughout the theatre and a breathtaking transformation of the young girl’s room into her own ice palace.

Additionally, there is credible information pointing to new Frozen musical to replace Toy Story the Musical aboard the Disney Wonder. However, this would not take place until the end of the year at the earliest.

On all four Disney ships, Olaf is giving warm hugs alongside Anna and Elsa. Children and families have the opportunity to meet and take photographs with their favorite “Frozen” friends on their royal tour of the Disney Fantasy, Disney Dream, Disney Wonder and Disney Magic.