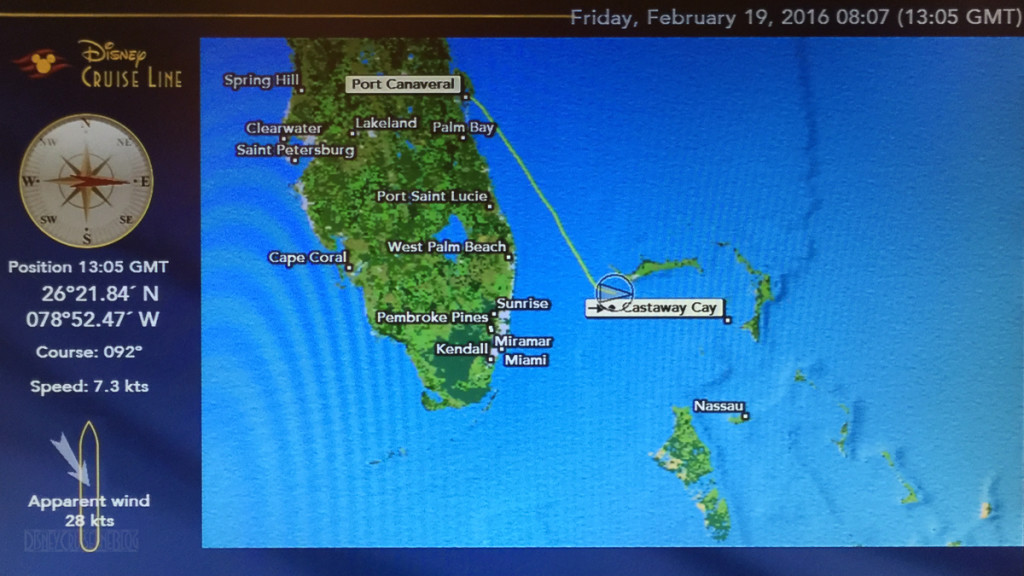 I slept in! Ok, my weekday alarm did go off, but I was able to fall back asleep for a little longer than normal on a Friday morning. I didn’t care as we were enjoying a day at sea with the first order of business was brunch at 10. After our luggage arrived on embarkation day, I sent off my sport coat to be dry cleaned and a dress shirt to be laundered and pressed. Due to the time constraints I had to pay double the typical onboard laundry prices, but in reality that is about what it would have cost me on land. Still it was worth it because they did some magic and the collar on the shirt was bright white!

Emily began her day at the gym as usual. It wasn’t too busy and she had an enjoyable workout. She grabbed a post-work out banana and a coffee and came back to the room a little after 8am.

We took Isabelle up to Cabanas for breakfast and then we split up. Isabelle headed over to check in to the Oceaneer Club/Lab while we walked around before heading up to Palo. During our walk, we passed the Fincantieri name plate for the Disney Magic up on deck 9. If you ever organize a ship wide scavenger hunt, this is a fun addition to the list. 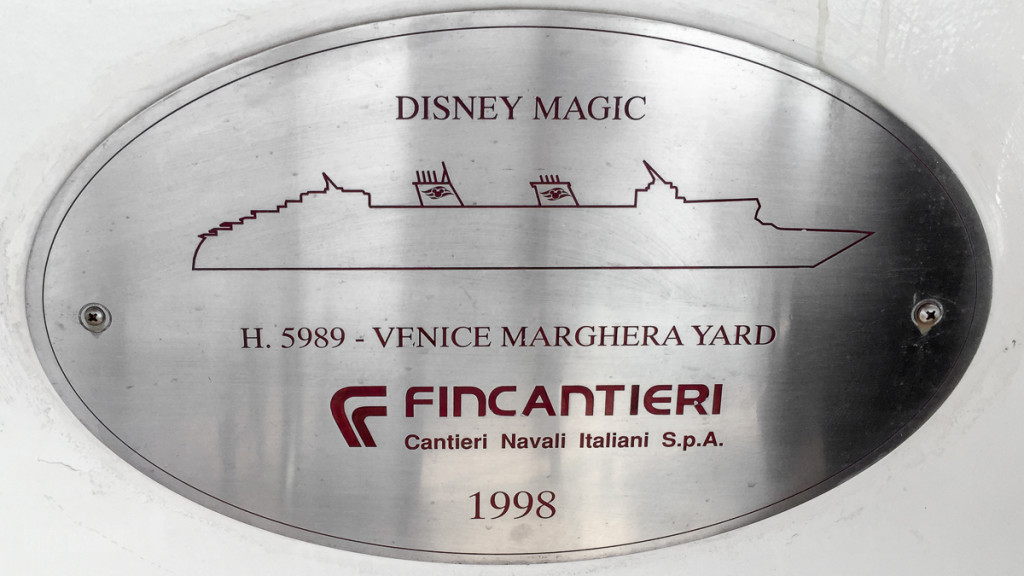 It was nice to see Felice still in Palo as the manager. We were seated and met our server Andrew who gave us a tour of the buffet. The Palo Brunch buffet was one of the best we’ve had in ages. The platters were bountiful and there seemed to be many more options than in the past. Emily enjoyed a plate of seafood (below), which I cannot enjoy due to my allergy. We only make one trip up to the buffet so that we can enjoy the made-to-order entrees. 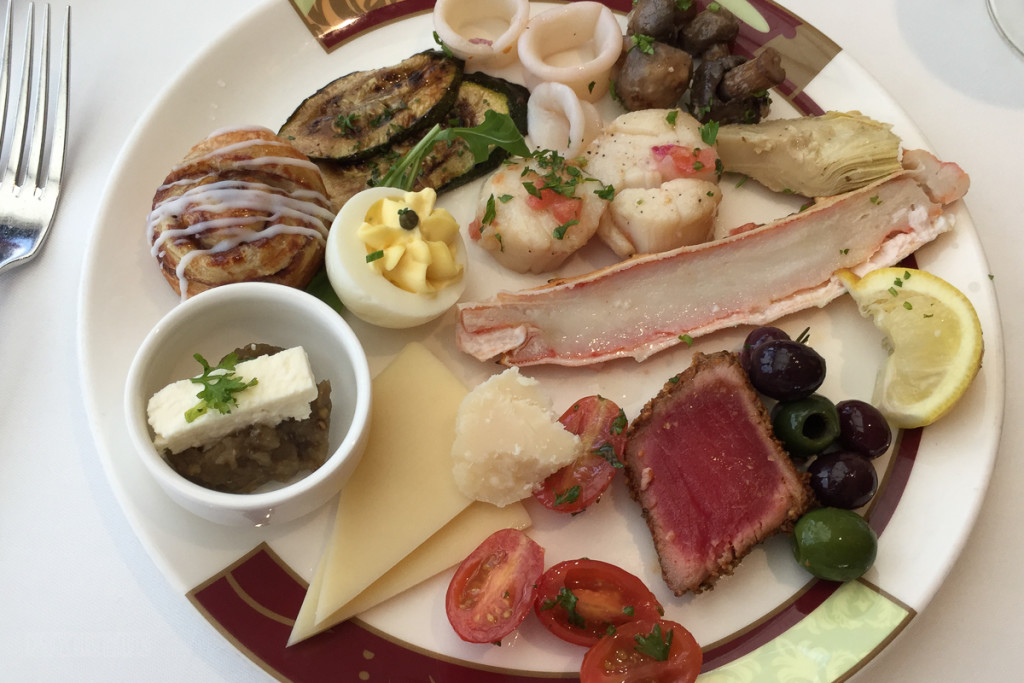 Emily and I shared a gorgonzola and grape pizza, which is delicious. Next time, I will be sure to request double gorgonzola – as you can see below, this pizza was kinda skimpy on the cheese. 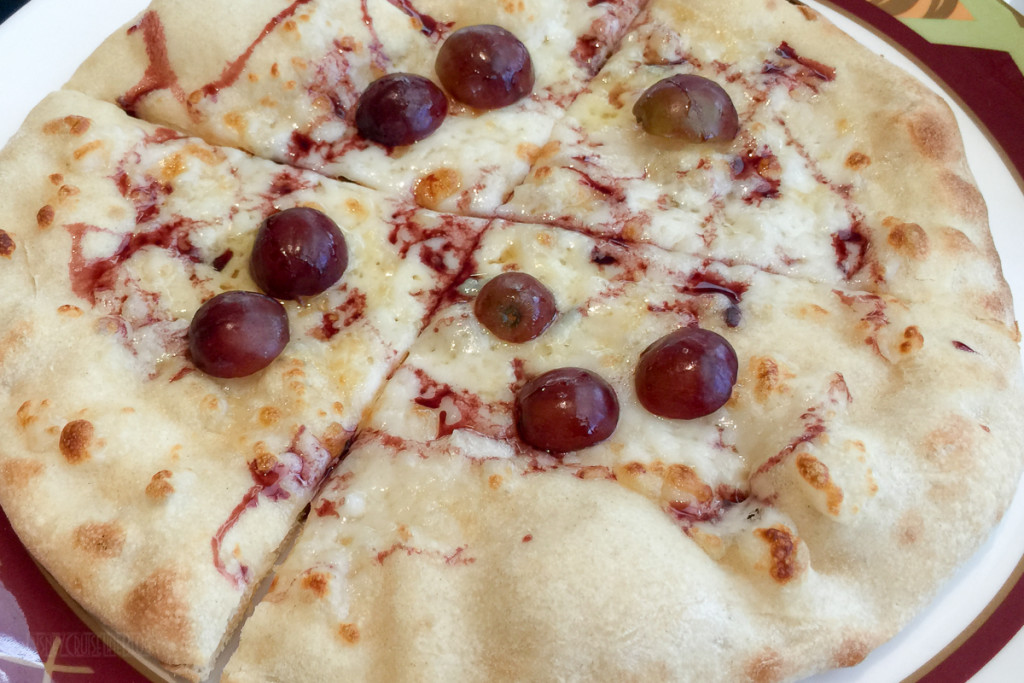 I’ve mentioned before, one of my weakness is the Palo Brunch Chicken Parmesan. It is going to take more than the poor execution of the risotto over the summer in Reykjavik to keep me from ordering this at brunch. I was thrilled that the risotto was once again on point! 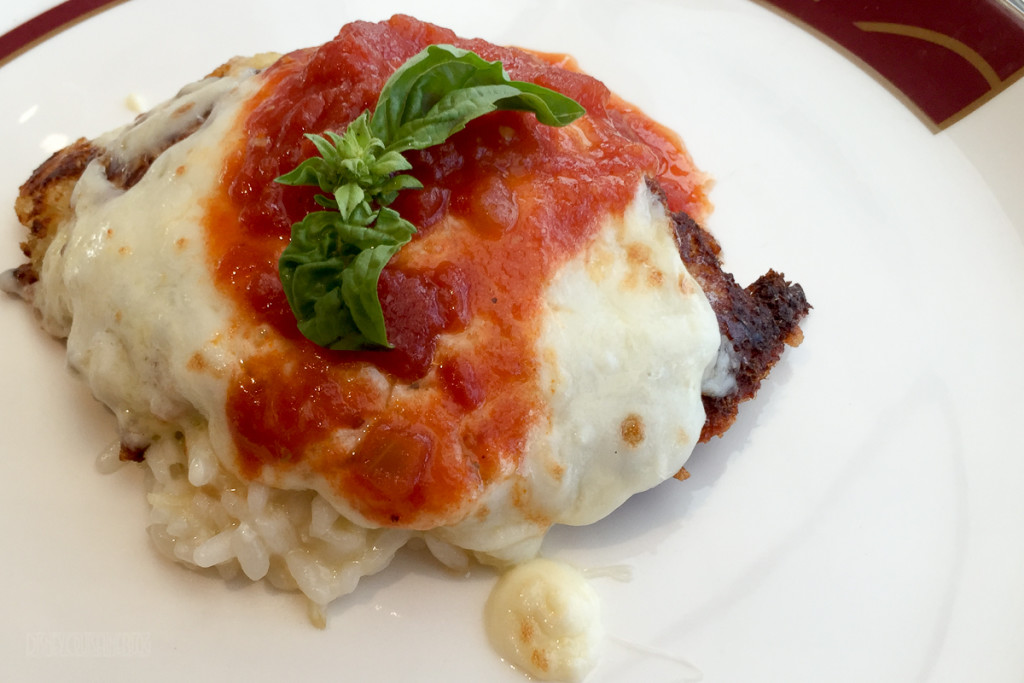 While I enjoy my dessert, the Chicken Parm is my dessert, Emily enjoyed a few new to us dessert treats along with a gigantic chocolate covered strawberry. 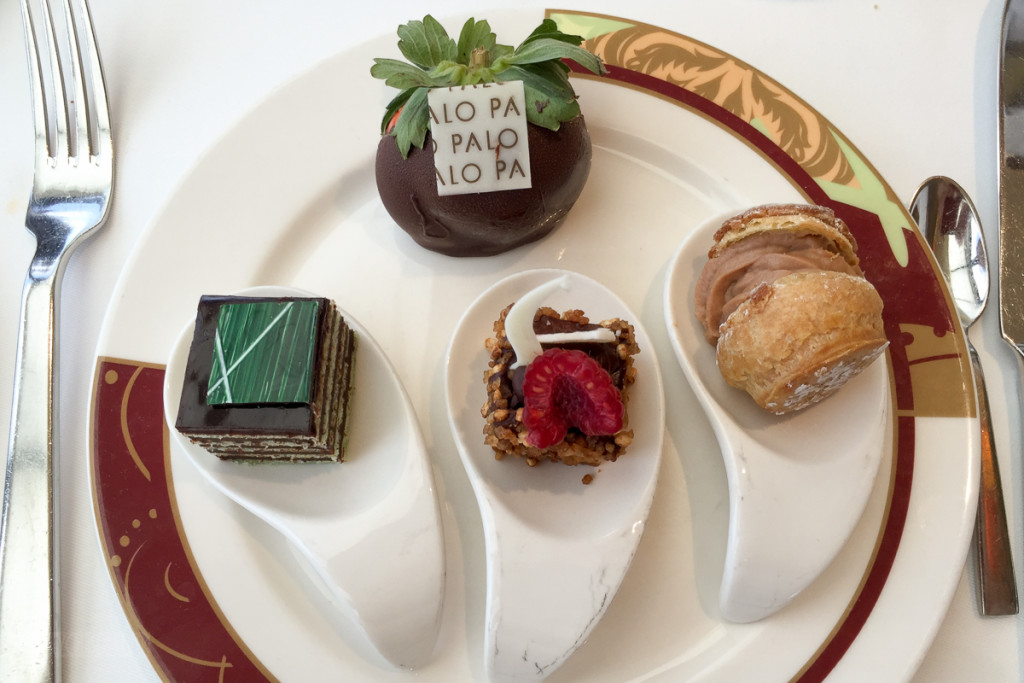 While most people find the chocolate soufflé from dinner the best Palo dessert, the Peach Almond Soufflé is not something anyone should skip. It is fairly small, and once again, Emily & I shared it. The sweetness was cut back a bit from the last time I ordered the soufflé which Emily and I both found refreshing. This version was well balanced and incredibly enjoyable! I encourage you to try it and if you do not like it I will happily take your leftovers.

After brunch, we picked up Isabelle and we took her up on deck so she could go swimming, while we wrapped ourselves in blankets. Although the air temperature was probably in the high 60s, it was cloudy and very windy. As much as I wanted to take a few drops on the AquaDunk, it was just too cold for us. 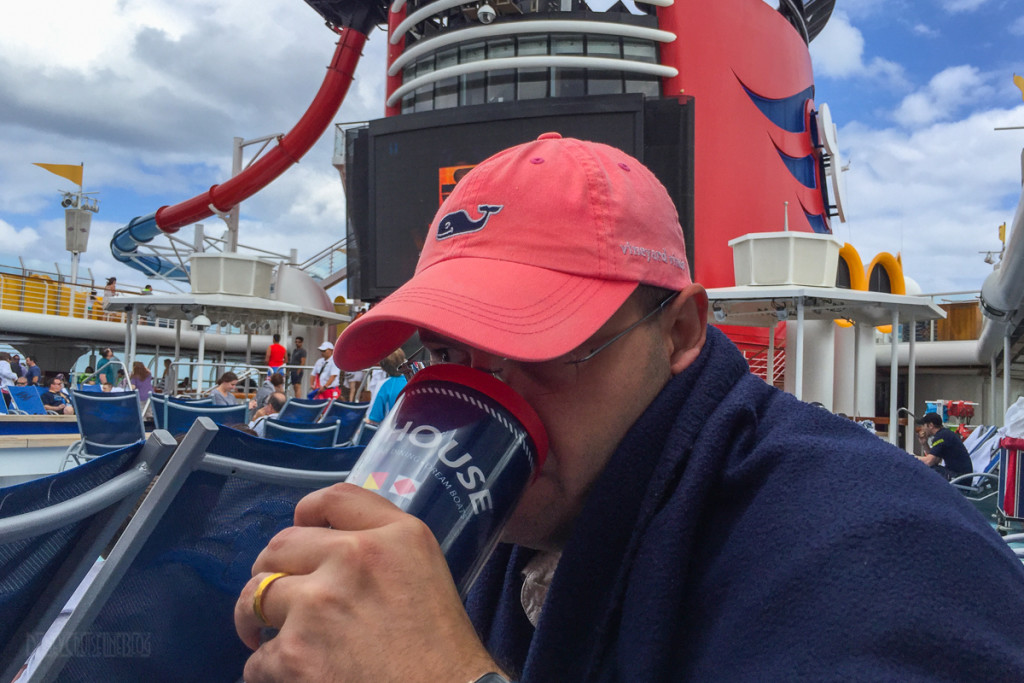 The kids played a bingo-like game for a chance to pick the next film to play on Funnel Vision. The winners of the first round were given a choice of movie types between a Pixar film, live action, a Disney classic and Disney Animation. The second round winner was then given the choice of specific film from a short list within the category. The winning team had a choice between a few live action films including COOL RUNNINGS and The Mighty Ducks, but I’m guessing they probably had no idea how great these films are because they picked The Muppets. A solid choice, but come on, when someone asks me if I want to watch COOL RUNNING I ask, “why havent we started it yet?”. The Muppets would have been my third choice after the previously mentioned films. I may or may not have been the only person singing along.

It started to sprinkle so we moved to a covered table while Isabelle had some lunch and Emily ordered the Drink of the Day. The Sunken Treasure is a combination of Midori, Blue Curacao, Orange Juice, Pineapple Juice, Sprite, Maraschino Cherry, and depending on the bartender, rum. This one, I thought the rum was at most a splash at most. Emily found it much too sweet and won’t be ordering it again. 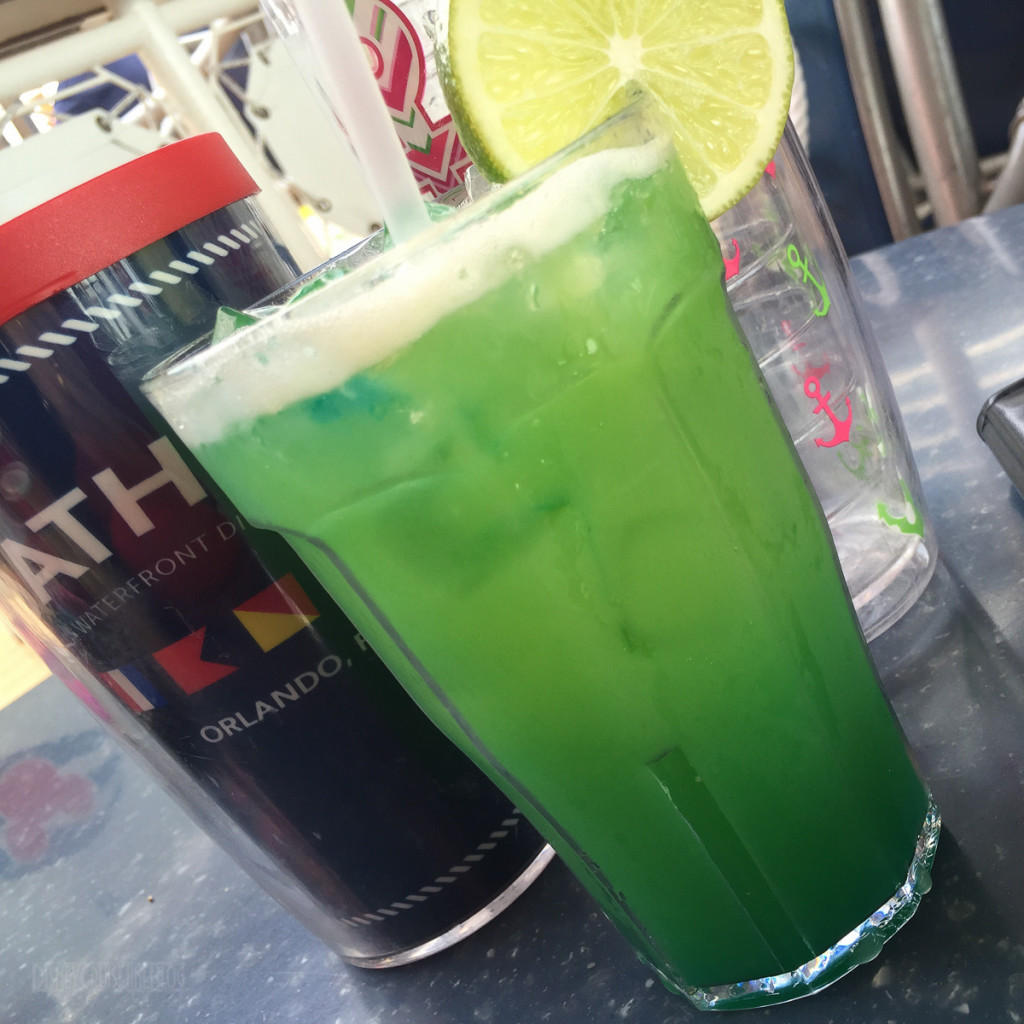 After lunch, we returned to the stateroom so that Isabelle could shower to warm up, then went to see Star Wars: The Force Awakens, which was presented with open captaining. At first, I thought it was distracting, but It helped me discover some interesting tidbits I missed during our first viewing back in December. I completely missed YODA’s voice during my previous viewing. 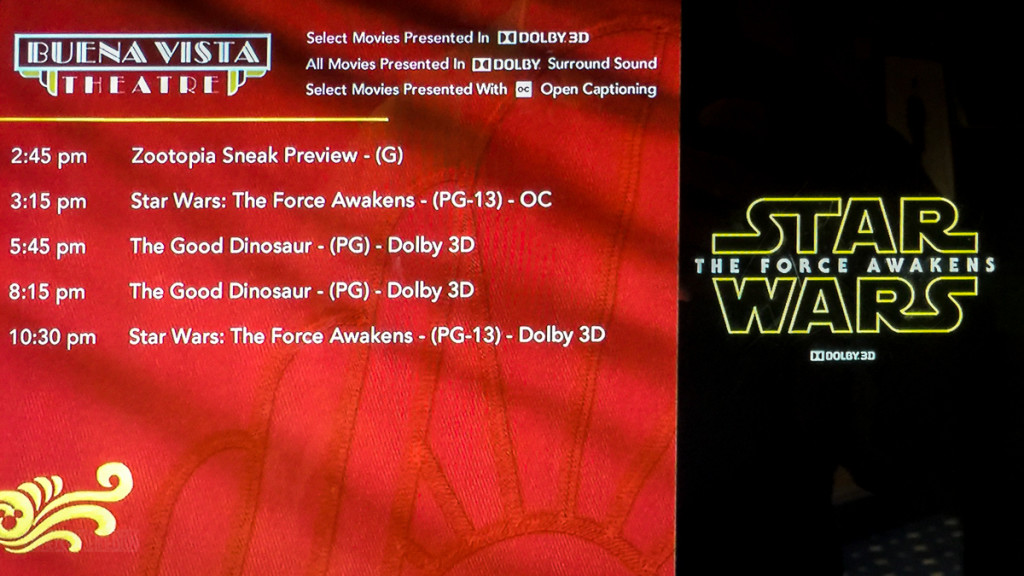 The movie ended with just enough time (20 minutes to be exact) to get dressed and head down to deck 3 for dinner at Lumiere’s. It was pirate night, but we had the regular rotational menu. The Pirate menu is only available on most itineraries lasting of 4-nights or longer. Although, the kids are still given the cool pirate night menu that doubles as a hat. 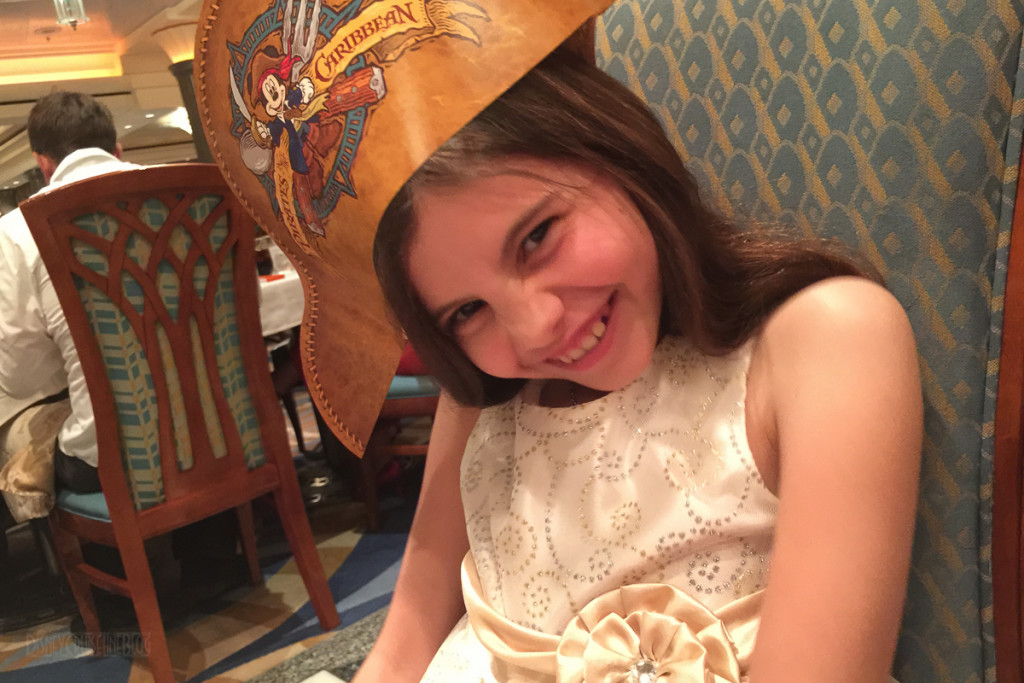 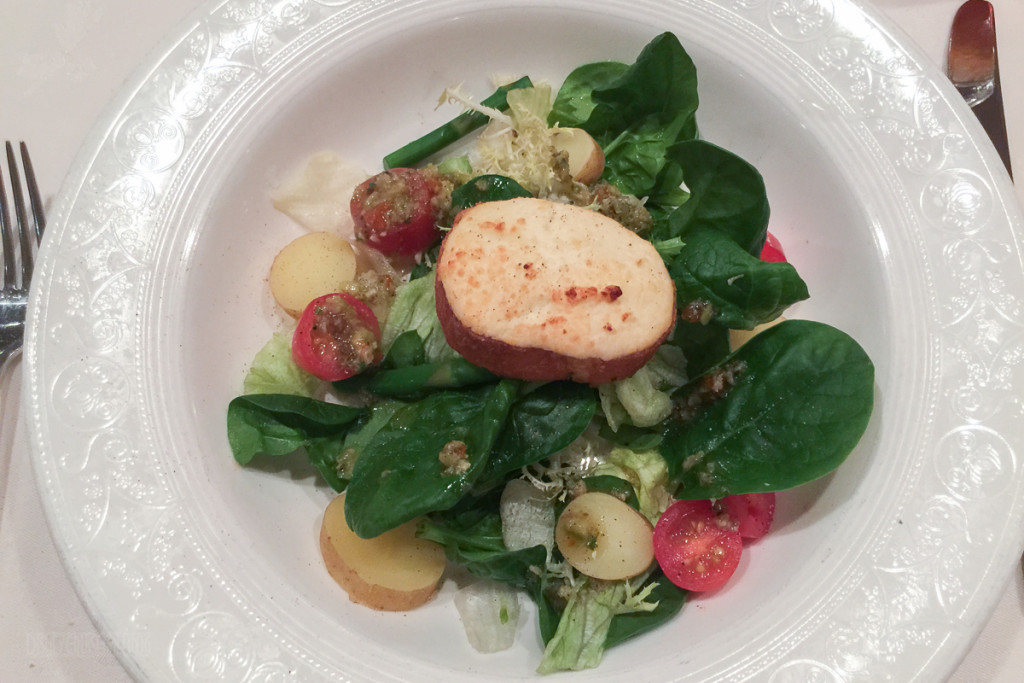 It is against blogger code to order the same dish. Since I broke that rule with the Sea Bass the night before, I opted for the other salad, the red wine bosc pear salad. The red-wine poached pear was delicious and offered a nice balance to the arugula. The salad also included red onions, crispy lardons (pork fat) with a sherry wine dressing. I enjoyed the salad, but I think I would have enjoyed the farmhouse salad better. 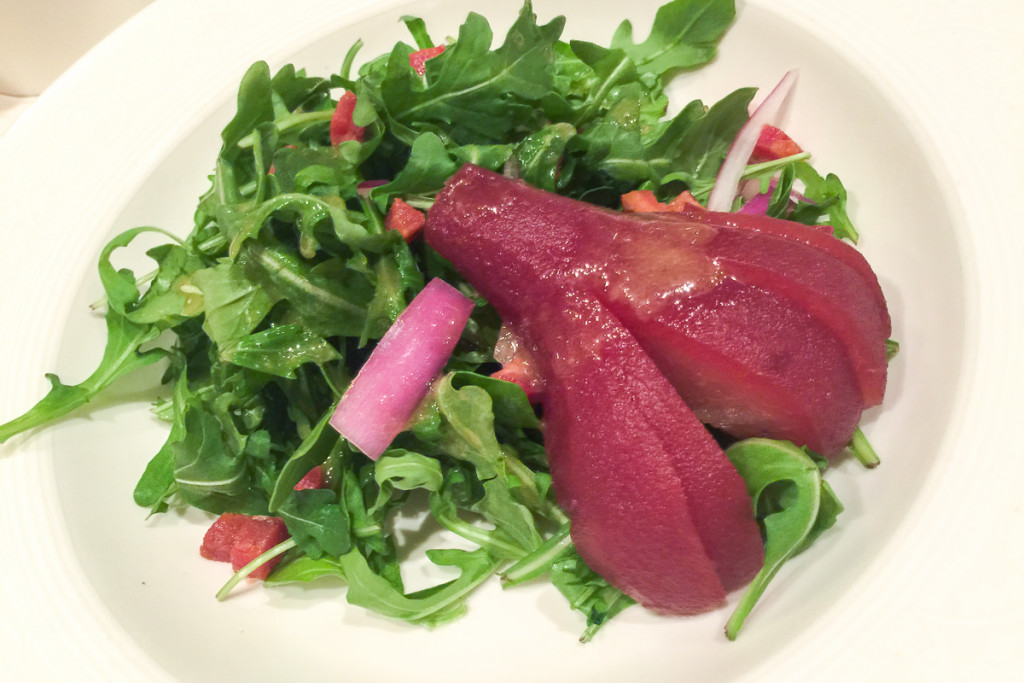 Our little seafood connoisseur opted for the Conchiglie Pasta which includes a piece of buttered lobster and shrimp over pasta shells covered with a tomato shrimp tarragon brandy sauce with lemon basil.The lobster was flavorful as well as the shrimp. 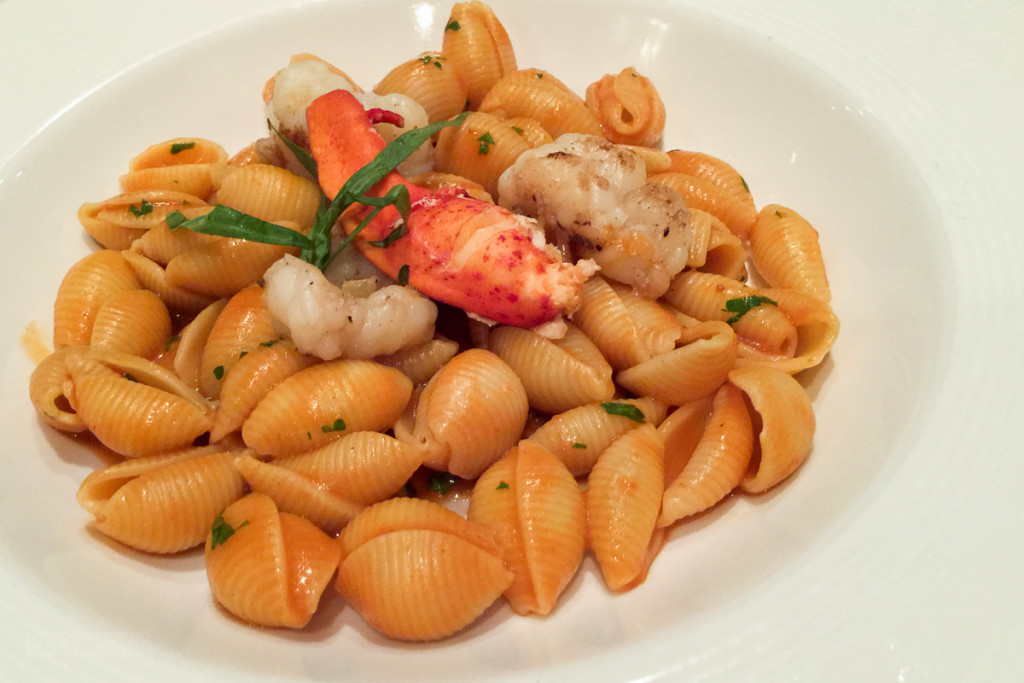 Emily picked a vegetarian entree, the Wild Mushroom-stuffed Pasta in a vegetable broth. The pasta is topped with watercress, shaved parmesan cheese and drilled with paprika oil. 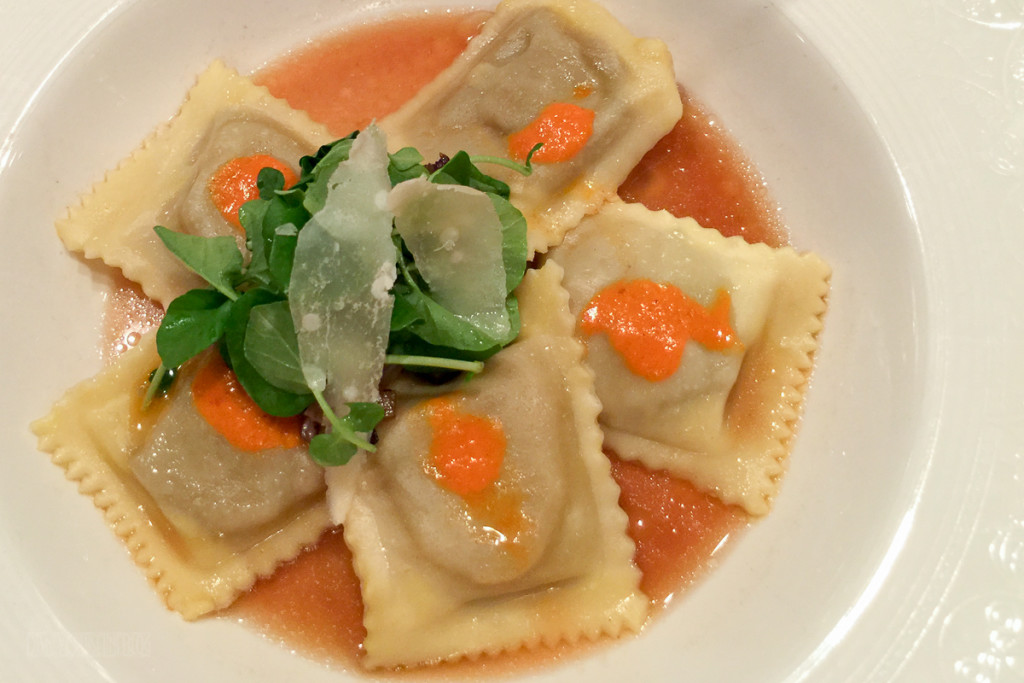 I ordered the Oven-Baked Salmon Royale which is king smoked salmon with a horseradish crust with sautéd swish chard and a delicious truffled cauliflower purée all accompanied by a white wine Beurre Blanc. Usually, I am not a fan of horseradish, but this is not overpowering and can be muted with the truffled cauliflower. I’m fairly certain I’ve ordered the salmon before and I’d do so again pending a Lumiere’s menu change. 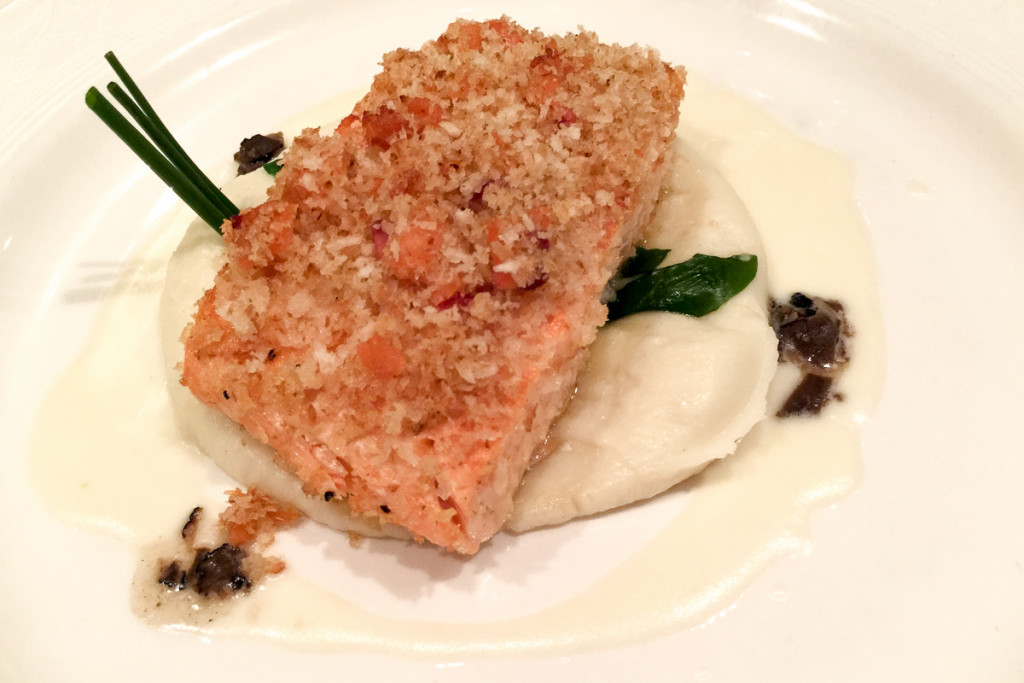 For dessert Emily, went with the Apple Tart Tatin. The caramelized based apple is served with a scoop of vanilla ice cream. 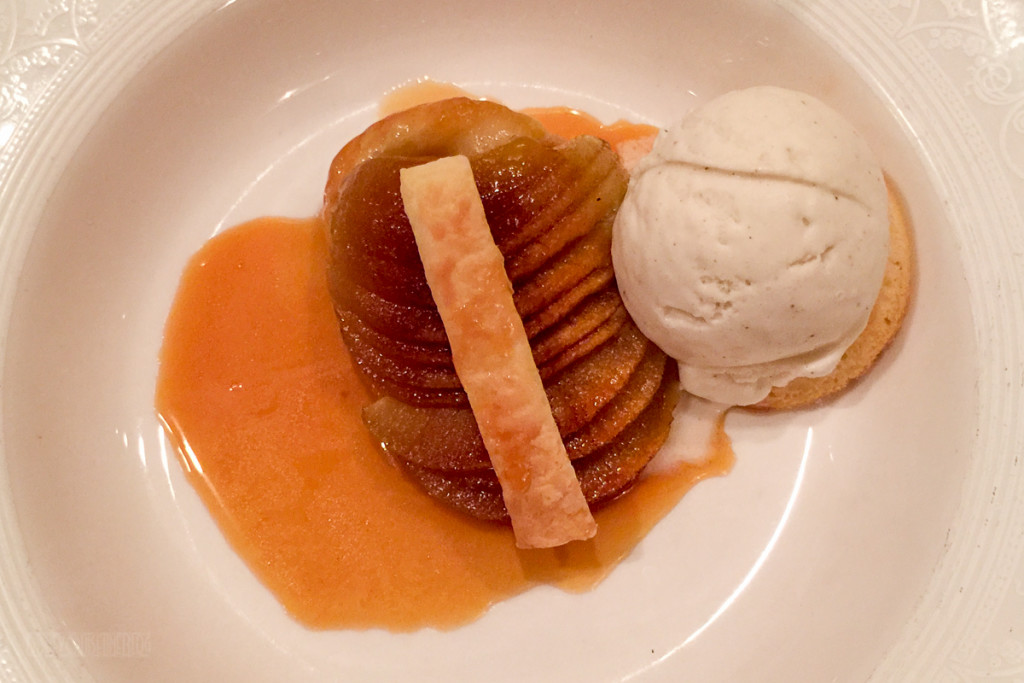 I fell back on an old favorite, the Tahitian Vanilla Créme Brûlée. It did not disappoint, but I am usually never disappointed when it comes to crime brûlée.

Following dinner, we took Isabelle to the Mickey’s Mainsail and WhiteCaps to see if there was anything worth buying. SPOILER ALERT – we didn’t find anything worth overpaying for on in the shops the entire cruise. This is very uncharacteristic of our family. Trust us, we tried. We usually find something we “need”. We usually cannot walk into the shops without buying something. However, the merchandise in general was underwhelming and the prices are not going down. There were some nice Nike golf shirts and a the co-branded Disney – Tommy Bahama apparel with subtle DCL logos were intriguing, but (2nd spoiler alert) the the Nike shirts often make it to the Disney outlets. The rest of the silkscreened shirts are becoming billboard shirts with graphics all over. Pass.

In an awesome move by Disney Cruise Line (at least on the Disney Magic) and at least temporarily the pirate night party and firework show is scheduled between main and late dinner seatings! This means this old guy was not fast asleep by the time firework show began. The pirate night buffet was still held from 10:15-11pm. Below is some amazing video of the Disney Magic’s Pirate Night Fireworks show poorly shot handheld with an iPhone by yours truly.

After the fireworks, we returned to our stateroom. The rest of the family headed to bed by 9:30, but I wasn’t necessarily tired enough to fall asleep, and I knew I wasn’t going to be hungry enough to indulge in the 10PM pirate night buffet in Cabanas. Lets face it, I had about an hour of awake left in my tank and instead of editing photos or typing up this blog post which is a few days late, I knew that I had Captain America: The Winter Soldier on my laptop! My fate was sealed; it was time for a nitecap. 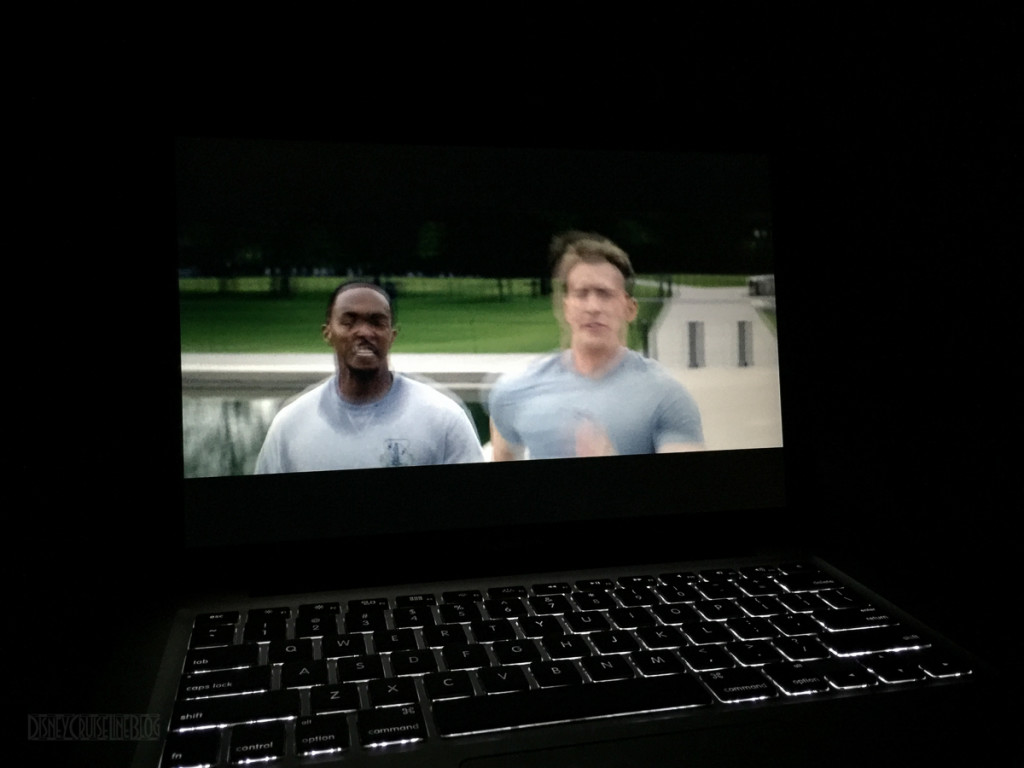