Cruise Critic, the world’s leading cruise reviews site and online cruise community, has announced the winners of its 8th annual Cruise Critic Editors’ Picks Awards, naming the best of the cruise industry in 25 categories, chosen by Cruise Critic’s international team of editors. Focused primarily on ocean cruises in the past, this is the first year a full list of awards for river cruises has also been announced.

Disney Cruise Line’s lone award was for Best Inside Staterooms. Cruise Critic acknowledged the  Disney Dream’s and Disney Fantasy’s magical portholes with virtual ship-cam views enhanced by animated characters floating past as a key feature. Additionally, with the split bath-and-a-half setups, room-dividing curtains and beds to sleep a family of four, and it’s easy to see why these industry-large 200-square-foot rooms received a nod from the editors. 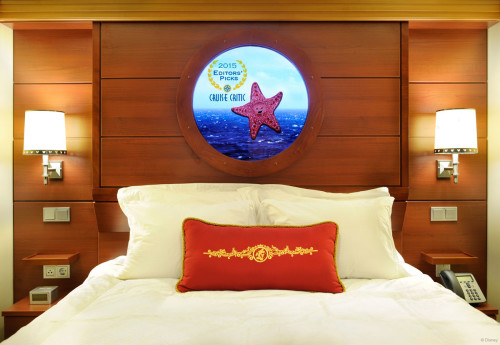 The cruise industry continues to cut into Disney Cruise LIne’s core market, families. In 2015, Cruise Critic Editors’ awarded Royal Caribbean Best for Families. Royal Caribbean hits all age groups, with onboard nurseries for babies and toddlers; bumper cars, poolside movies and extensive activities for kids; and rock climbing walls, hip hangouts and video game systems for teens. Add in a range of family-friendly cabins, affordable fares and babysitting options for parents, and any family can have a blast onboard.

Disney Cruise Line’s main homeport, Port Canaveral earned top honors as Best North American Homeport. Previously overshadowed by other Florida cruise ports, Port Canaveral is one of the most up-and-coming cruise hubs in North America. Split into two areas, the facility has seven ship berths, with plans for three more. You’ll find beaches, a campground, oceanfront dining, and a new Exploration Tower. Not to mention a short drive to the Central Florida attractions such as Walt Disney World and Universal.

CruiseCritic.com “editors live and breathe cruising, sailing year-round and covering every aspect of the industry – from new ships and programs to updated amenities and features,” explained Carolyn Spencer Brown, editor-in-chief of Cruise Critic. “With so many wonderful cruise options available, it’s never an easy list to narrow down, but these awards truly represent the lines that our experts have recognized as the best of the best.  This year we also highlight the top river cruise lines, reflecting the growth of this sector – in terms of both interest and options.”

In this year’s awards, announced today, Viking Star was named Best New Ship of 2015 in the ocean category. As the first ship in the Viking Oceans fleet, the 930-passenger Viking Star offers an entirely new product for cruisers. Beyond the ship’s overall design – which editors compared to a boutique hotel – Viking also carried over its more inclusive price structure from its river offerings, with inclusions like complimentary Wi-Fi, alcoholic beverages at lunch and dinner and a free shore excursion in every port.

Carnival Cruise Line was named Best Value-for-Money for the second year in a row for its range of affordable fares and well-rounded offerings onboard. In the river category this award went to Emerald Waterways for its variety of inclusions and onboard amenities.

Azamara Club Cruises was awarded Best Shore Excursions for the second consecutive year, a nod to the line’s range of tour options – from small-group cultural experiences during the day, to tours and outings in the evening. Azamara also received Best Itineraries for its ability to visit less frequented ports, and its commitment to destination immersion.

To view the full details on each winning line, visit the 2015 Cruise Critic Editors’ Picks Awards.