The Disney Magic is out of dry dock and on her way back to Miami. Guests onboard have shared photos and provided more details on the changes that Disney Cruise Line for one reason or another decided not to share via their various public channels. The addition of Bibbidi Bobbidi Boutique and the relocation of Edge were the notable changes Disney announced in July. DCL kept the concierge lounge a secret (and understandably so,  as it is still not completed for the Transatlantic) until officially mentioning it in the Fall 2015 Castaway Club Members Magazine published earlier this month. I think the biggest news is the addition of six new stateroom in place of the original Edge on Deck 2 midship.

We inquired last week, but did not hear back from Disney Cruise Line about our request for an updated deck plan. Until one is published, or someone screenshots every part of the Personal Navigator app, we will just go with the screenshots we have below.

A few passengers were kind enough to tweet some images on Saturday after boarding the Disney Magic in Barcelona. I like to start by thanking Nikki, Phillip Montgomery, and Touring Plans via Seth Kubersky.

Potentially, the biggest unannounced enhancement (because the addition is still in progress) during the Disney Magic’s 2015 dry dock are 6 new inside staterooms on deck 2 midship in place of the original Edge. The new staterooms on the Disney Magic are: 2063, 2065, 2067, 2563, 2565 and 2567. I’ve added these staterooms to the Stateroom Explorer on the site using 2071 and 2571 as the guides. Once the rooms are added, if you happen to sail in these new rooms, please consider leaving a stateroom review. 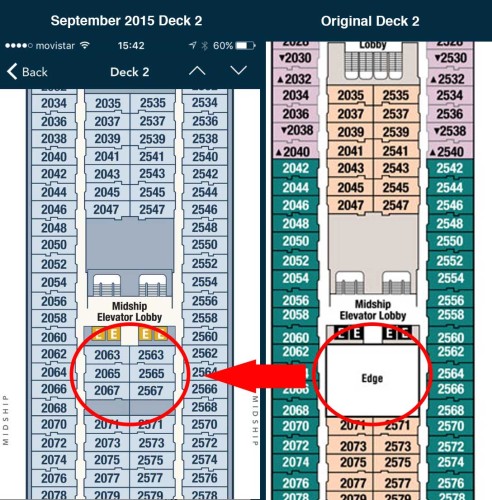 I tried to book a cruise in these rooms as far out as December 2016, but I could not find a cruise on the Disney Magic where this category was available to actually select a specific stateroom. It should be noted DCL’s online ship tour feature is not update with the recent dry dock changes. However, this feature also helps guests select staterooms.

Edge is now relocated into the old Quarter Masters Arcade on Deck 9 Midship. According to the report from Seth Kubersky, Edge is now decorated with a 20,000 Leagues Under the Sea theme which ties in nicely with the Oceaneer Lab which saw a more refreshing in 2013. 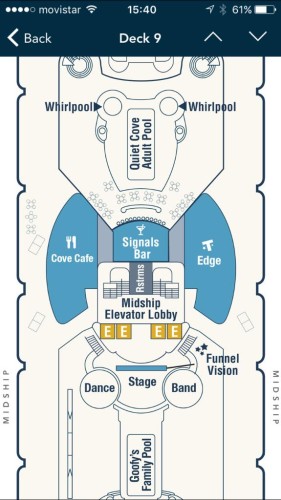 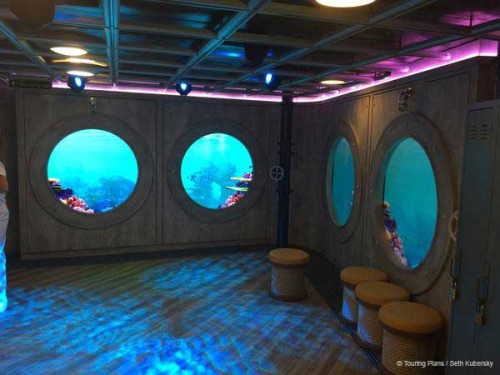 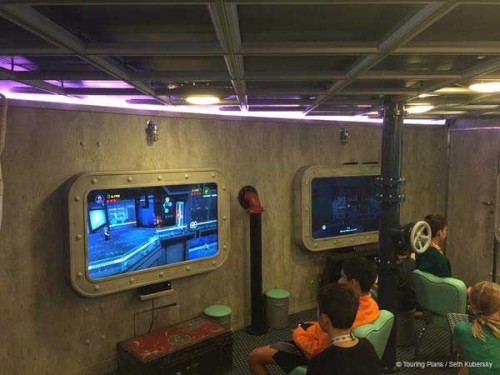 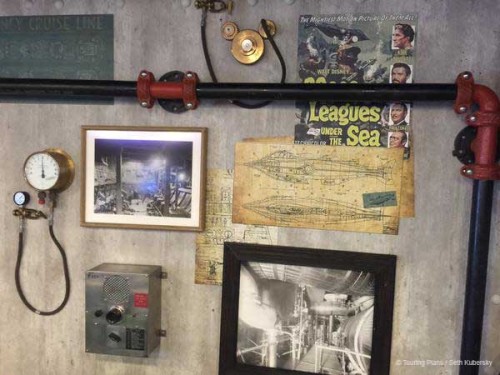 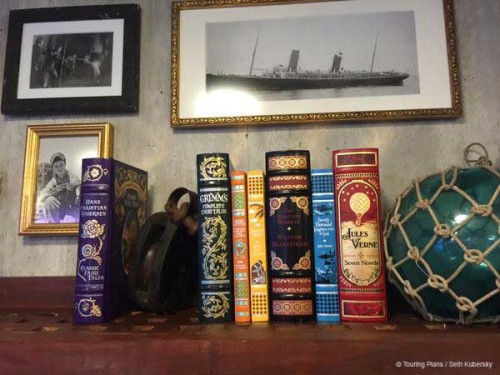 It’s a dry dock miracle! The seats and bench seating in the Promenade Lounge received new upholstery. That’s right this — is not a joke anymore folks; the worn and torn leather bench seats in Mickey Mouse colors are newly upholstered along with the chairs. 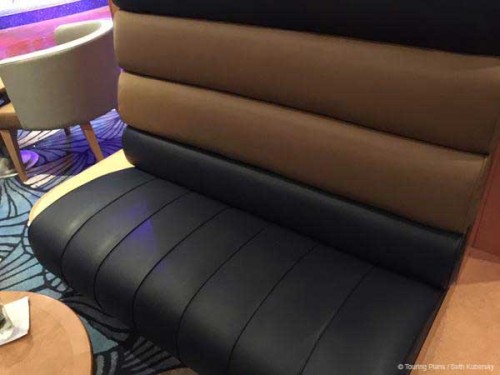 There is not much to see with regard to the new Concierge Lounge on the Disney Magic, as it is still in progress. Before anyone goes and says Disney missed the boat and didn’t schedule enough time — remember, they did not promote this as a dry dock enhancement. In fact, DCL quietly acknowledged the new addition earlier this month in the Castaway Club online newsletter. 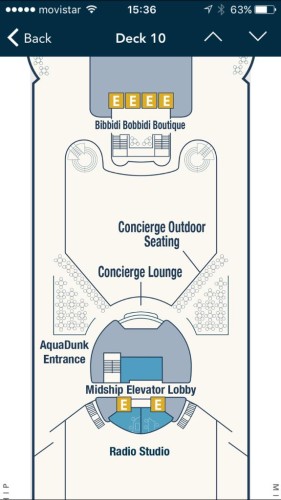 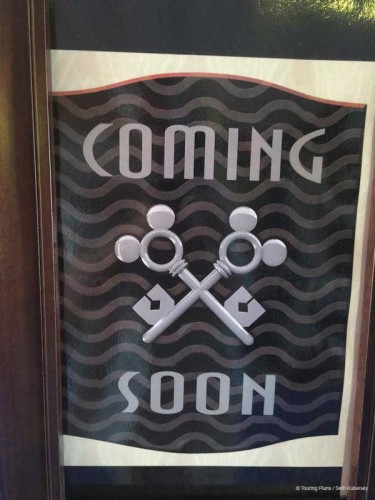 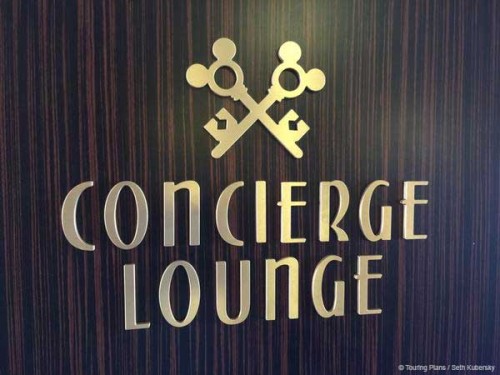 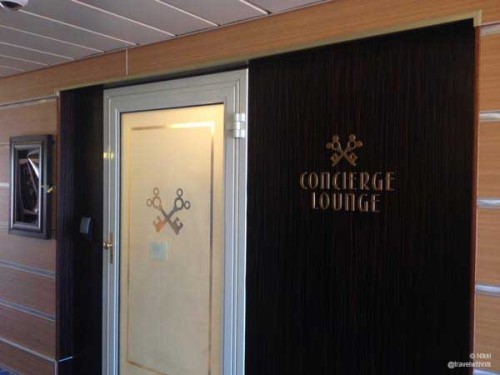 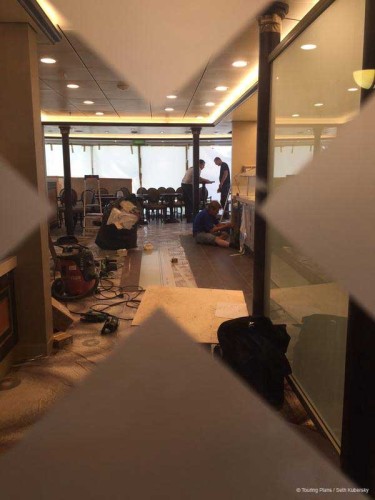 There is a separate entrance on Deck 10 for access to the Concierge Outdoor seating area. 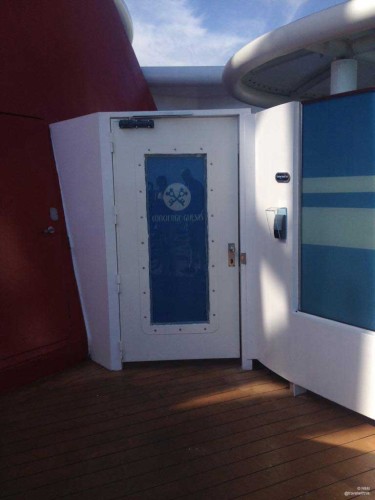 This exterior shot shows the windows of the Concierge Lounge and the covered outdoor seating area o the left. 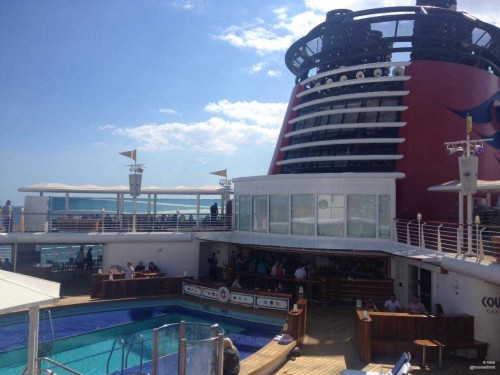 Last but not least, the addition of Bibbidi Bobbidi Boutique could very well generate more onboard spending than the six new staterooms on deck 2 combined. This is one part of the July announcement I had completely wrong with regard to location on the ship. At that time, I said this was already done with the addition of Anna & Elsa’s boutique in the Deck 10 FWD funnel, but it turns out the location of the new Bibbidi Bobbidi Boutique is located near Senses Spa & Salon on the starboard side of the ship. 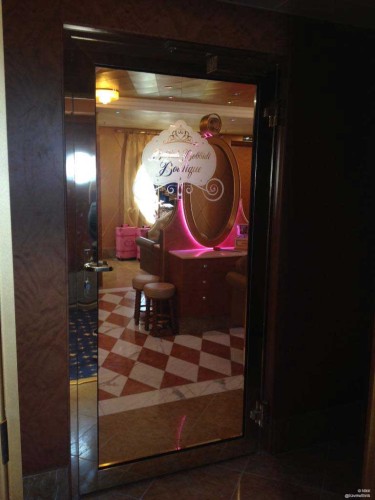 Disney Magic Propulsion System Upgrade
One more thing… A Cadiz newspaper reported the Disney Magic would receive an upgrade to the propulsion system to improve the hydrodynamic performance to reduce fuel consumption. Once again, I asked Disney Cruise Line to expound on the upgrade, but our emails must now be automatically going to the trash bin. So, in true blogger form, I will make stuff up and show a few pictures. The upgrade allegedly will help improve the hydrodynamic performance of the Disney Magic and reduce fuel consumption. I can almost guarantee this fuel savings will not be passed along to passengers in the form of lower cruise fares so do not ask.

I’ve never tracked the speeds of the ships, but the Disney Magic has always been listed as having a top speed of 24 knots. Following dry dock, the Disney Magic was shown on the MarineTraffic.com site sailing at 26 knots. Whether or not this a result of the upgrade, or simply a result of not sailing with passengers, luggage, provisions and other stuff (technical term used in the cruise industry). The screenshot below show the Disney Magic cruising at 26 knots and increases the number of images in this article making it appear longer and more detailed. 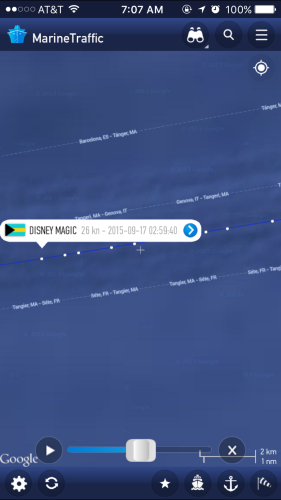 Scouring social media during dry dock, I did find evidence to the work on the Disney Magic’s propulsion system.

There was also an amazing crew photo to commemorate the 2015 Disney Magic dry dock.

The Disney Magic will begin sailing Bahamian and Caribbean itineraries from PortMiami on September 30th. Then, she will reposition to Port Canaveral at the end of January 2016.