Disney Cruise Line announced a new batch of itineraries this morning filled with European Magic as well as the traditional sailings to Alaska, the Caribbean and The Bahamas. Disney Cruise Line will be sailing to 15 different European counties in 2016. A 12-Night British Isles Cruise will include majestic England, romantic France, an beautiful Ireland. A couple of repositioning, 12-Night Northern European sailings from Dover and Copenhagen will include Iceland, breathtaking Norway. Additionally, the Disney Magic will return the Mediterranean and Greece. There is even an itinerary that includes both.

The Disney Wonder will be returning to Alaska with sailings from Vancouver while the Dream and Fantasy will contiue to sail a varienty of Bahamaian and Caribbean itineraries from Port Canaveral in what is being touted as the most magical years ever for Disney Cruise Line.

Today’s release extended the available sail dates into August 2016 for the Magic & Wonder and through September 2016 for the Dream & Fantasy. These new sail dates will allow guest to plan vacations more than one year out, s well as take advantage of opening day pricing for some of of the unique European sailings they may have been intriguing from the 2015 summer schedule.

The Disney Magic will start May 2016 with two additional Caribbean Sailings from Port Canaveral before embarking on a 14-night Transatlantic cruise to Dover, England.

Once in Dover, the Disney Magic will sail to the Norwegian Fjords and the British Isles. The 12-Night Sailing to Iceland and Norway is a repositioning cruise to Copenhagen.

The Magic will arrive in Copenhagen for a Norwegian Fjord cruise followed by a 7-night Northern European sailing. The Disney Magic will depart Copenhagen mid-July on another 12-Night Iceland and Norway repositioning cruise back to Dover.

The Disney Magic will only be back in Dover to embark on a 7-night repositioning cruise to Barcelona.

The Disney Wonder will kick off summer on May 1st with the same 14-Night Westbound Panama Canal cruise as this year that ends in San Diego, California.

San Diego will serve as a brief stop over for the Disney Wonder in mid-May 2016. She will sail one 3-night Getaway Cruise then head north on a 5-night repositioning cruise to Vancouver.

Once in Vancouver, the Disney Wonder will sail her regular 7-Night Alaskan itinerary through mid-August.

It is uncertain what the Disney Wonder will so the remainder of the summer, but previous indications point to a re-imagination.

The Disney Dream will spend the summer months alternating between three and four-night Bahamian sailings. Unlike in 2015, there are no 5-night sailings with two-stops at Castaway Cay.

The Disney Fantasy will spend the Summer of 2016 sailing alternating 7-Night Eastern and Western Caribbean cruises from Port Canaveral, Florida.

Travel on a Dream posted the sail dates that DCL has excluded from the Onboard Booking promotion. Remember, these dates are subject to change and additional sailings may be blocked out. The sailings are as follows:

For those interested in a brochure, Disney Cruise Line published an updated 2015-2016 Sail Dates & Itineraries booklet. Click the image below to download the brochure as a PDF. 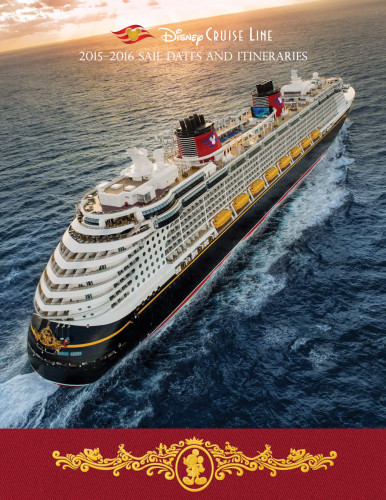 Below is the copy of the press release that you can read verbatim at hundreds of other websites.

New ports in Scotland, England, Ireland and France join other popular destinations for the summer season

In addition to the tour of Europe with limited engagements in the Baltic, Norwegian Fjords, Iceland, British Isles, Greek Isles and the Mediterranean, Disney Cruise Line will revisit favorite destinations elsewhere around the globe including Alaska, the Caribbean and the Bahamas.

Bookings for the new itineraries open to the public on March 26, 2015. More details can be found on the Itineraries and Ports for 2016 page of disneycruise.com.

On June 5, 2016, Disney Cruise Line will sail from Dover, England on its very first British Isles itinerary. The 12-night cruise on the Disney Magic will sail to Invergordon, Kirkwall and Greenock (Glasgow), Scotland; Newcastle and Liverpool, England; Dublin, Ireland; Le Havre (Paris), France; and Guernsey; one of the Channel Islands. All of these, except Kirkwall, are first-time ports of call for Disney Cruise Line.

On this itinerary, guests can explore the majestic beauty of Scotland, experience Highland culture, sample traditional cuisine and spirits, and discover the country’s iconic castles. Elsewhere on the itinerary, guests will experience the merry, cosmopolitan city of Dublin, the culturally rich and romantic Paris, the birthplace of the Beatles and the British Invasion in Liverpool, and the charming countryside of Guernsey.

On this itinerary, three days in Iceland provides time to explore the country’s rich natural wonders such as volcanoes, lava fields, glaciers and thermal springs. In Norway, guests are immersed in the splendor and charm of the country with exciting ports steeped in Viking history.

For the first time, Disney Cruise Line will sail from Dover, England on a seven-night cruise to the majestic Norwegian fjords. Departing on May 29, the Disney Magic will visit Stavanger, Alesund, Geiranger and Bergen, Norway.

During the summer of 2016, the Disney Magic will return to favorite destinations in northern Europe, the Greek Isles and the Mediterranean with a variety of seven-night and longer sailings.

From May through August 2016, the Disney Wonder will return to Alaska, sailing from Vancouver, Canada to Tracy Arm, Skagway, Juneau and Ketchikan.

In 2016, the Disney Dream and Disney Fantasy will sail from Port Canaveral to the Bahamas and Caribbean on a variety of itineraries. All of these cruises include a stop at Disney’s private island, Castaway Cay.

Although the dates were announced today, booking will not being until March 25. On Wednesday, Platinum & Gold Castaway Club members will be able to call in or have their travel agents book sailings. On Thursday, March 26th Silver Castaway Club members as well as first time cruisers will be able to book. I mentioned this yesterday, but it is worth repeating… Please do not try calling today to book; this will just clog up the phone lines and bog down the reservation cast members. There may be people attempting to book an available cruise vacation today.