This week, Disney Cruise Line published their Q1 – 2014 Voluntary Crime Allegation disclosure report for the period January 1 – March 31, 2014. During this period there were two allegations. The first involved an assault with serious bodily injury among family members against another passenger and another alleged sexual assault between two crew members. During the quarter DCL estimated there were 260,000 passengers and a daily complement of 5000 crew members. According to the report, these allegations were reported to the appropriate law enforcement and government authorities. 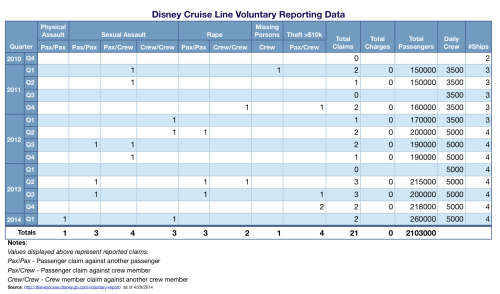 The biggest surprise to me was the record number of passengers sailing with Disney Cruise Line during the first quarter of 2014. There was an increase of 42,000 passengers during the first quarter of 2014 compared to Q4-2013. Based on the voluntary report data the passenger count appears to have set a quarterly record for DCL with four ships sailing from Florida ports. The Disney Magic began sailing three and four night sailings from Port Canaveral in January. These shorter itineraries appear to be the driving force behind the reported passenger numbers. More sailing via shorter itineraries = more passengers.

Please note, reports for previous quarters with zero claims did not include total passenger or crew numbers.  However, the daily crew numbers seem fixed on these reports so I’ve carried that number over for the months without any claims. According to the voluntary reports published to date by Disney Cruise Line, to the best of Disney Cruise Line’s knowledge, no charges have been filed in any of these alleged incidents.

The most recent incident aboard the Disney Dream is expected to be reported in the next quarterly report Q2-2014.