Our third day at sea started like a mirror image of the previous morning waking up for another day at sea aboard the Disney Fantasy. 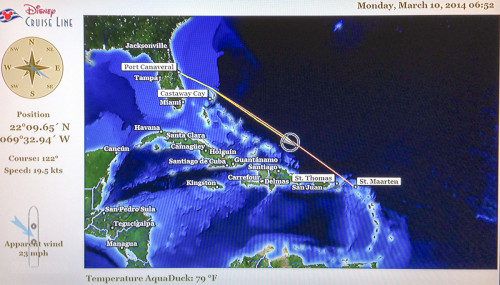 The only difference this morning was that Isabelle joined me for breakfast in Cabanas while Emily stayed behind to exercise on the verandah. I am a sucker for the roasted potatoes in the morning and today they had the tasty Mexican breakfast rollups. 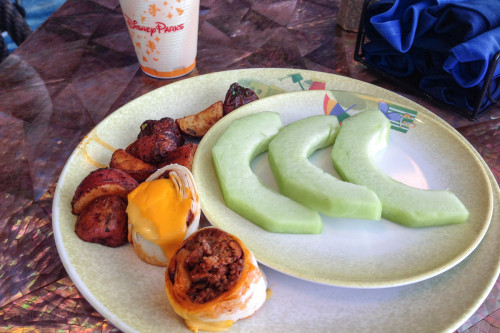 The main objective for the day was to enjoy the pools on the upper decks as the previous sea day was full on inside activities. We arrived early enough to get a couple good seats for the first movie of the day on Funnel Vision, Mulan. 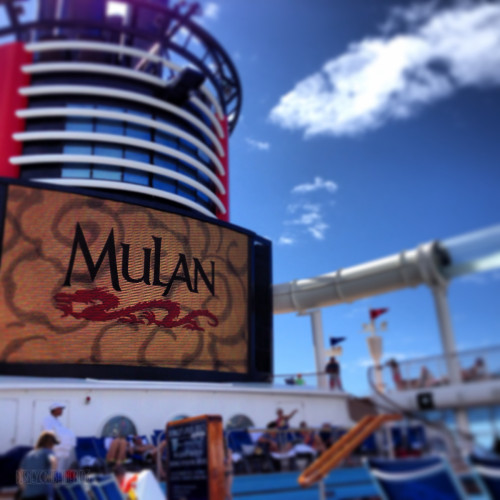 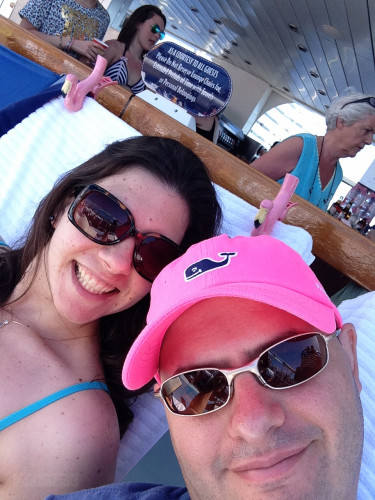 We spent the majority of the morning poolside and enjoyed the drink of the day, the Yellow Bird. 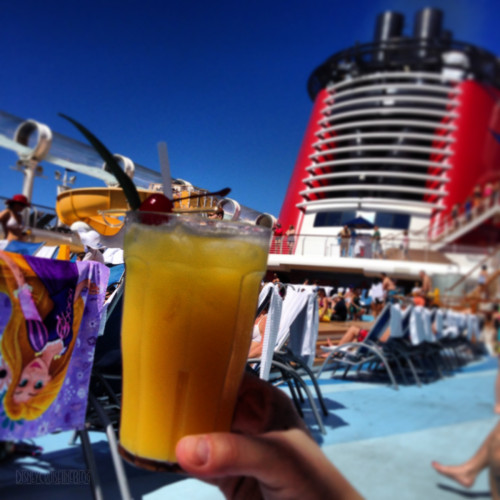 Lunch was a mixture of pizza and sandwiches from Flo’s V8 Cafe. 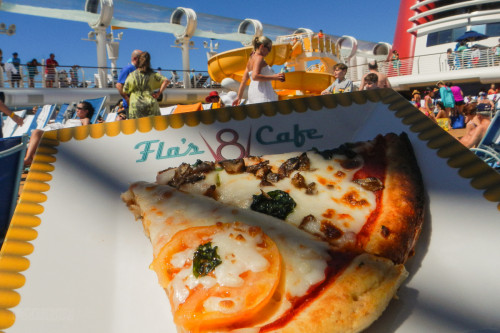 Shortly after the lunch hour, the upper decks began to fill up. The AquaDuck line was now extending down the staircase. 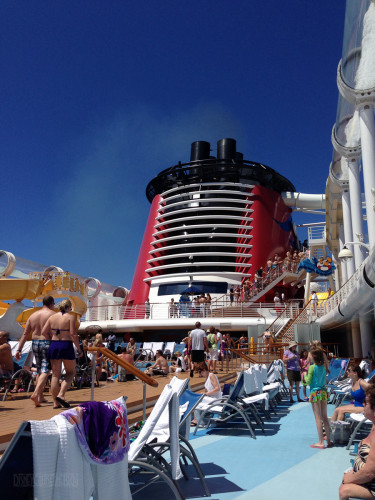 We decided to hang around a little longer as Isabelle was looking forward to taking part in the Disney Channel on Deck activities since she saw it listed in the Personal Navigator (Day 3) last night before bed. The activity was hosted by the cruise staff around the Donald pool. The activity was a mix of trivia games as well as team skill challenges. Towards the end of the event, the cruise staff allowed the crowd to vote for the which Disney Channel show they wanted to watch on Funnel Vision. While Jessie appeared to win with the kids, the overall pick between the adults and children was Phineas & Pherb. 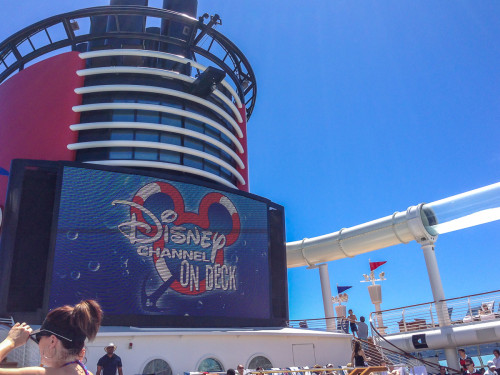 With the crowds picking we decided to call it a day and head back to the room to get cleaned up and head over to the matinee of Disney Wishes in the Walt Disney Theatre. Walking down the hallway, I was taken by the smell of the fresh popped popcorn that is now being served outside the Buena Vista Theatre. I opted for the souvenir bucket ($7.25) which you can get refilled for the price of the regular size popcorn ($3.50) knowing I’d probably want to get some popcorn later in the week for the PremEAR of Need for Speed. 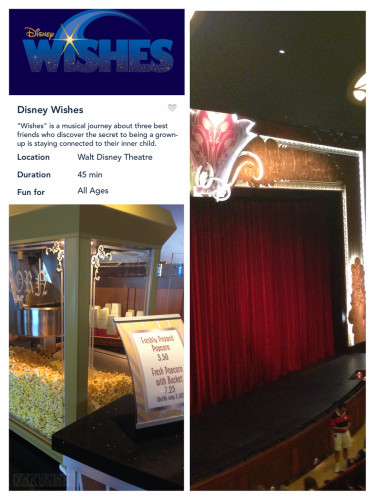 On our way back to our stateroom following Wishes we made our way to a few of the pieces of Enchanted Artwork as Isabelle continued her Muppets Midship Detective Agency quest.

As we all got ready for dinner, I could not help to take in the spectacular ocean view on this picture perfect day. The weather today, was perfect! 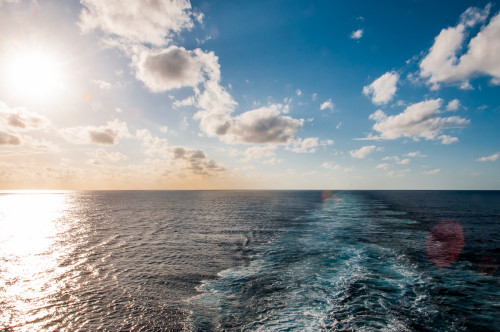 Tonight’s dinner was in Enchanted Garden with our amazing serving team, Maria and Sergio. 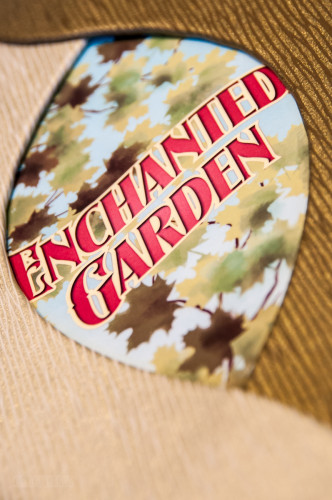 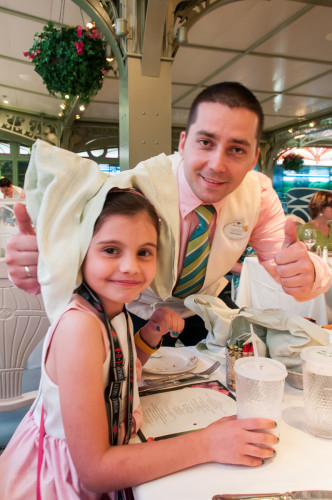 After dinner Isabelle hit up the remaining Midship Detective Agency locations and soon enough narrowed it down to… Well, that is for you to find out at another time. 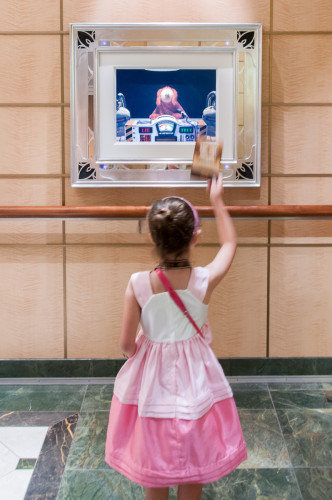 With the case solved, we checked Isabelle into the Oceaneer Club were she worked on something special for someone’s big day tomorrow.

Emily and I found ourselves lured back to Ooh La La to try a few more of the tasty concoctions. I went with the Blue Angel and Emily chose the Peach Bellini. 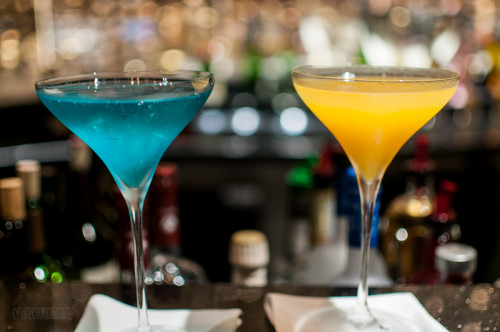 After a nice talk with our bartender, Vanessa, we decided to call it a night in order to pick up Isabelle and get to bed.

Before we move on to day four, I want to share a photo I captured before we called it a night on day 2. I set up the tripod and took an ludicrously long exposure, just shy of 4 and half minutes, from the verandah. 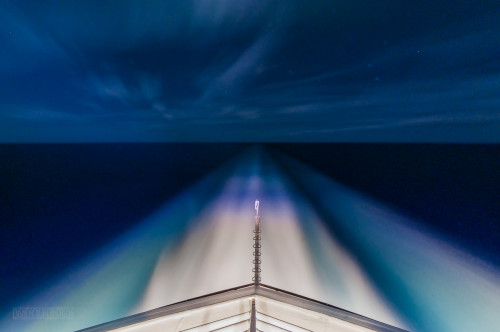 Tomorrow is our first day port, St Maarten where we will do our best to keep Isabelle away from any party at the Dutch consulate.