Over the past seven months, we’ve been learning a bit of information here and there about the transformation of Parrot Cay into Carioca’s during the upcoming reimiagination of the Disney Magic.  It started with some concept art for a cruise ship restaurant in late January, which resembled an overlay to Parrot Cay.  The concept art was then confirmed in late April when it was shown, albiet slightly tweaked, during the Monstrous Summer announcement to be Carioca’s, a new Brazilian inspired main dining restaurant.  Then, over the last few months, we’ve been teased by new menu options and recipes planned for Carioca’s.

Today, thanks to a tip from StitchKingdom.com, we have some potential concept art to admire featuring the main entry way of Carioca’s.  The dark colors prominent in Parrot Cay will give way to a bright and vibrant entry with the same Portuguese pavement matching the floor inside the resturant. 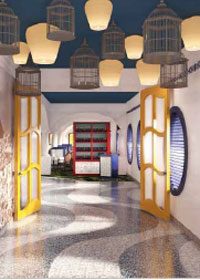 A two part mural, featuring the coastlines of Rio de Janeiro and São Paulo will cover the wall opposite the portholes as you enter the venue.  The break in the mural appears to coincide with the doorway in the rendering above. 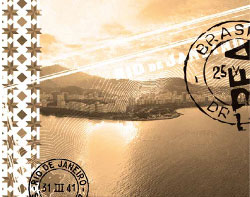 The Three Caballeros; Panchioto Pistoles, José Carioca, and El Pato (Donald Duck) will also be featured on the mural in a pose reminiscent a poster from the Gran Fiesta Tour at Epcot. 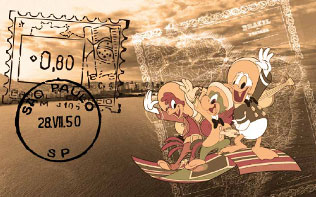 What do you think about the new entry way planned for Carioca’s on the [Disney_Magic]?