I’m sure, the first thing that comes to mind when you hear J.D. Power & Associates are the automotive awards that are touted in almost every car commercial.  As it turns out, they are much more than just automotive awards. Today, JD Power & Associates released the results of their inaugural Cruise Line Satisfaction Report for 2013.  Disney Cruise Line  earned  a five Power Circle rating for consumers in JDPower.com Power Circle Ratings by ranking the highest in the consumer satisfaction survey.  Disney topped the report card with an 87% scoring 871 out of a possible 1000 points, which is well above the report average of 82%.

The 2013 Cruise Line Satisfaction report is based on responses received between May 29, 1013 and June 14, 2013 from 3,003 passengers who travelled on a cruise line during the past twelve months.  The report measures cruise lines based on the following criteria, listed below in the order of importance:

Of the seven major cruise lines included, only two scored below average. 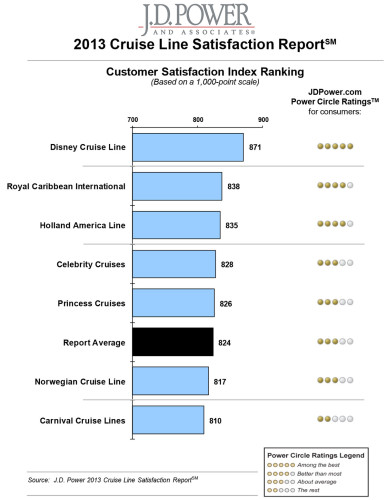 Price and past experience are the two primary reasons stated by the respondents of this survey for selecting a cruise line.  The report notes that TV advertisements scored the lowest in terms of what influences people to select a particular line while the cruise line’s website ranks as the number one method perspective cruisers become aware and select a cruise line.

The Problem with Problems

Although, customer satisfaction with the cruise lines is high, the report shows that 18% of passengers across all cruise lines say they experienced at least one problem during their respective cruise.  However, the report does not go into detail on what one would consider a problem.  Furthermore, the public report summary does not provide a breakdown by cruise line.

I reached out to JD Power & Associates in order to understand this statistic, and had a brief discussion with Ramez Faza, senior account manager of the global travel and hospitality practice at J.D. Power over the phone on Friday afternoon.  I wanted to know what question, or series of questions were presented to the survey respondents which ultimately funneled into this statistic.

According to Faza, the survey respondents were asked if they experienced any problems during their cruise in a yes/no format.  If the respondent selected yes, they were then asked for the number of problems they experienced.  Below is an example of the question as it may have been presented to a survey respondent.  Please note, this is not an actual screenshot.  This is just a visual aid in order to show how the question may have been presented during the online survey.

As you can see, the question itself does not allow J.D. Power to further classify the problems into levels of severity in the final report.  Was the problem reported a minor issue affecting one person/family, or did this issue affect a substantial percentage of the passengers on the sailing?  There is little debate when the issue impacts all the passengers such as a breakdown, or the decisions made during a hurricane.  The problem with problems is that they can be very subjective resulting in a watered down statistic when people are responding to the question with a Yes when they experienced an inconvenience such as not getting a lounge chair poolside on a sea day.

During my discussion with Mr Faza, I learned that this inaugural survey was created to test the waters so to speak and not intended to be a comprehensive study.  If the report is deemed popular it may be expanded to a more verbose survey that would be more along the lines of J.D. Power’s Airline Satisfaction Survey.

I am a numbers guy, so this sort of stuff fascinates me, but without a verbose data set to further classify problems the Inaugural Cruise Line Satisfaction misses the boat.  If consumer satisfaction is as high as the report suggests then the statistic of  1 in 5 passengers, or  the roughly 600 respondents who said yes to experiencing a problem needs to be investigated further.

For example, if you were to apply this statistic to the [Disney_Fantasy] which sails 7-Night Caribbean cruises with a capacity of 4000 guests the number would break down to approximately 115 problems per day.  I am sure if you counted the number of people standing in line at guest services complaining about something may add up to this, but if you have ever overheard fellow passengers some of the problems are more along the lines of nit-picking.

Guests have high expectations when they are paying the prices Disney charges.  Disney is well aware that guest satisfaction is paramount which is why at the end of every Disney Cruise passengers are provided a guest comment card to complete.  The results are tabulated and analyzed before the ship embarks on their next cruise.   The key to Disney’s survey is the allotted free text space which allows guests to provide specific details good or bad.  In order for J.D. Power’s Cruise Line Satisfaction survey to make way in the cruise industry this survey would need to be expanded to provide a better overall picture.

While some may discredit this inaugural survey, I think this is just the start with room for improvement and I hope to see this expanded for 2014.  Ultimately, the results from a well thought out survey  could help raise the bar across the cruise industry, which would result in a better passenger experience.