On a day where the Dow Jones Industrial Average closed above 15,000 for the first time, The Walt Disney Company (DIS) closed at an all time high $66.07 a share.  This record day for Disney comes on the heels of a huge weekend at the box office for Iron Man 3, as well as a multi year deal naming Electronic Art (EA) the exclusive video game developer of Star Wars titles on Monday. 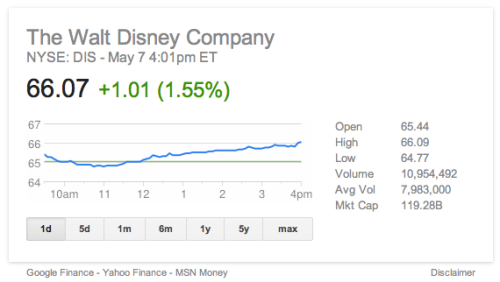 The Walt Disney Company reported a 10% increase in revenue for the quarter (which ended on March 30th) to $10.55 billion.  Shares of stock were up $0.79 over last quarter.  Bob Iger in an interview on CNBC stated, “All in all it was a great quarter.”  Capital spending decreases from $2.1 to $1.1 billion due to a decrease in spending at the Parks & Resorts following the construction costs of Disney California Adventure and Disney’s Art of Animation resort in Orlando.  The final progress payment for the Disney Fantasy clearing the books last quarter.  These decreases were slightly offset by higher spending at the Shanghai Disney Resort.

Driving strong second quarter in the Parks & Resorts segment of the company, was an increase in attendance at both Walt Disney World Resort and Disneyland Resort, the [Disney_Fantasy], and higher occupied room nights at the Walt Disney World Resort.  It should be noted that this is the first time the Disney Fantasy has been attributed to the company’s second quarter earnings as her maiden voyage was not until March 31st, 2012.

Operating income increased 73% to $383 million with revenue up 14% to $3.3 billion.  Results for the quarter were driven by increased guest spending due to higher average ticket prices, food & beverage, merchandise, and daily hotel room rates. An early Easter holiday shifted most spring break vacations into the second quarter adding a boost, as well.  This will not be the case next year as Easter falls on April 20, 2014.

These increases were partially offset by increased costs driven by new guest offerings, including investments in systems infrastructure at Walt Disney World Resort (MyMagic +), and resort expansion at Disneyland Resort, as well as labor and other cost inflation.

“Our [Disney] results reflect our successful strategy, the strength of our brands, and the value of our high-quality creative content; all of which continue to drive long-term growth and shareholder value,” according to Bob Iger, Chairman and CEO.

Although the Dream & Fantasy are paid off, there will eventually be an increase in expenditures for the Parks & Resorts segment associated with the reimagined Disney Magic this fall and her sister, the Disney Wonder in 2014.

Near the end of the hour long conference call David Miller, Senior Analyst from B Riley & Co, asked if “there is still a fuel hedge for the boats [sic]”.  Jay Rasulo, Senior Executive VP and CFO responded with, “We generally hedge our fuel out of Port Canaveral.  It accounts for about a third of what we [Disney Cruise Line] will using in terms of fuel for the cruise line this year.”  Fuel hedging is a practice of making advanced purchases of fuel at a fixed or capped price for the contract term.  The benefit of fuel hedging is to help eliminate the risk of fluctuating fuel price increases.  Southwest Airlines’ fuel hedging allowing the them to be successful while other airlines resort to excessive fees.

Even with increase vacation costs, ticket prices, and cruise fares, guests continue to remain loyal to The Walt Disney Company.

For more information and an overall report click over to the Q2-2013 Earnings Report.