In Marvel’s latest release, Robert Downey Jr steps back into the shoes of Tony Stark and parties like it is 1999. Although the majority of he movie follows the events from last years blockbuster The Avengers there are no direct ties or character crossovers in the film other an obvious need for Tony to see a psychiatrist to help overcome his insomnia and anxiety attacks triggered by his near death experience in The Avengers. Not even the women he cannot live without, Pepper Potts (Gwyneth Paltrow), can ease his troubles. 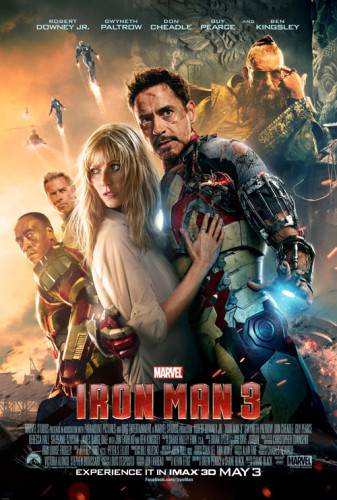 This is mostly spoiler free, as long as you do not include material shown in trailers and other promotional videos. If you want to see the movie 100% spoiler free then stop reading and head out to the theater.

Tony is out for revenge after a series of events orchestrated by the Mandarin leave Happy (Jon Favreau), his former bodyguard and current head of security for Stark Industries in a coma. The Mandarin, who is brought to life by Ben Kingsley, is basically an Ringo Starr/Osama Bin Laden clone right down the the scraggly beard and the chilling hand held video messages. Eventually, Tony receives help tracking down the Mandarin from Harley, a young boy he ‘befriends’ in Tennessee, and his pal James Rhodes (Don Cheadle), AKA WarMachine, Iron Patriot, ,it doesn’t even matter whatever sounds best. All I know is that WARMACHINEROX.

Discussing any more of the movie will spoil the various twists and turns, but I will say the official Iron Man 3 trailer, just grazes the surface. The plot twists are not hard to see coming, but thankfully they do little to diminish the movie for what it is meant to be, a fun filled, actioned packed blockbuster helmed by the ever sarcastic, Tony Stark.

Make sure to stay in your seats though the end credits. The bonus scene is not a lead in to the next Marvel blockbuster, but it does clear up the director’s (Shane Black) use of a voice over.

Do you need to see Iron Man 1, Iron Man 2, and The Avengers to enjoy Iron Man 3? Not really, it is helpful, but even without the background information Iron Man 3 can be enjoyed as a standalone movie. If you have the time I would suggest watching them first, but don’t let it stop you from seeing this on your next cruise.

I have to ask considering part of Iron Man 3 was set in Miami, why did the [Disney_Wonder] not get a cameo? Check your Personal Navigators for showtimes during your next cruise. What did you think of Iron Man 3?